Werder Bremen and Borussia Mönchengladbach faced off in the Bundesliga on Tuesday, with both teams in search of points for very different reasons. For Werder, their search for points stems from the need to escape the bottom of the Bundesliga table, where they currently sit in 17th place. For Gladbach, they hoped to boost their campaign for a UEFA Champions League spot and potentially close the gap on Bayern Munich.

This tactical analysis will examine the tactics used by both Florian Kohfeldt and Marco Rose in their match that ended with a final score of 0-0. The analysis will look at Bremen’s successful defensive structures and how Gladbach attempted, but ultimately failed, to play through them. 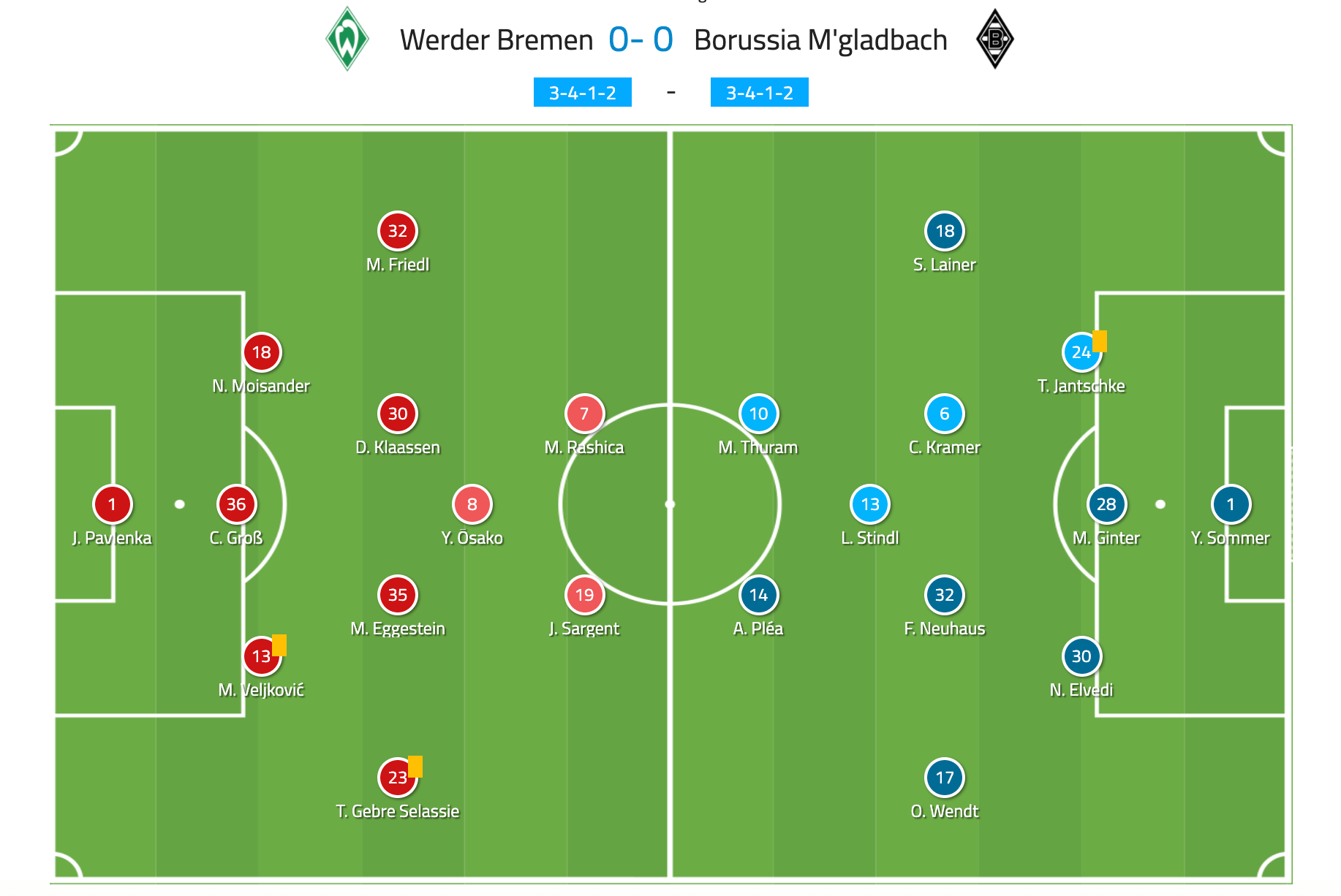 Kohfeldt sent his team out in a 3-4-1-2 formation, with Jiří Pavlenka in goal. The back three consisted of Niklas Moisander, Christian Groß, and Miloš Veljković. Marco Friedl and Theodor Gebre Selassie operated as the wingers, with Maximilian Eggestein and Davy Klaassen pairing together in the centre of the pitch. The front three for Werder was made up of Milot Rashica, Yuya Osako and Josh Sargent.

Marco Rose’s Gladbach started Yann Sommer in goal with Nico Elvedi, Matthias Ginter, and Tony Jantschke making up the back three of their 3-4-1-2. Their midfield consisted of Oscar Wendt, Florian Neuhaus, Christoph Kramer, and Stefan Lainer, with Wendt and Lainer on the wings. Lars Stindl played behind the pair Alassane Pléa and Marcus Thuram in attack.

Bremen have struggled defensively for almost the entire season, conceding 59 goals in the Bundesliga, which is second-worst in the league behind Mainz 05. However, against Gladbach, Werder’s defensive structures frustrated the visitors throughout the match. In regard to their press, Werder used a 5-2-3 structure when Gladbach was in possession in the middle of the pitch. When the ball would move from one side to another, Werder would have a wing-back in the defensive line press up on Gladbach’s winger, so it looked more like a 4-3-3 structure. 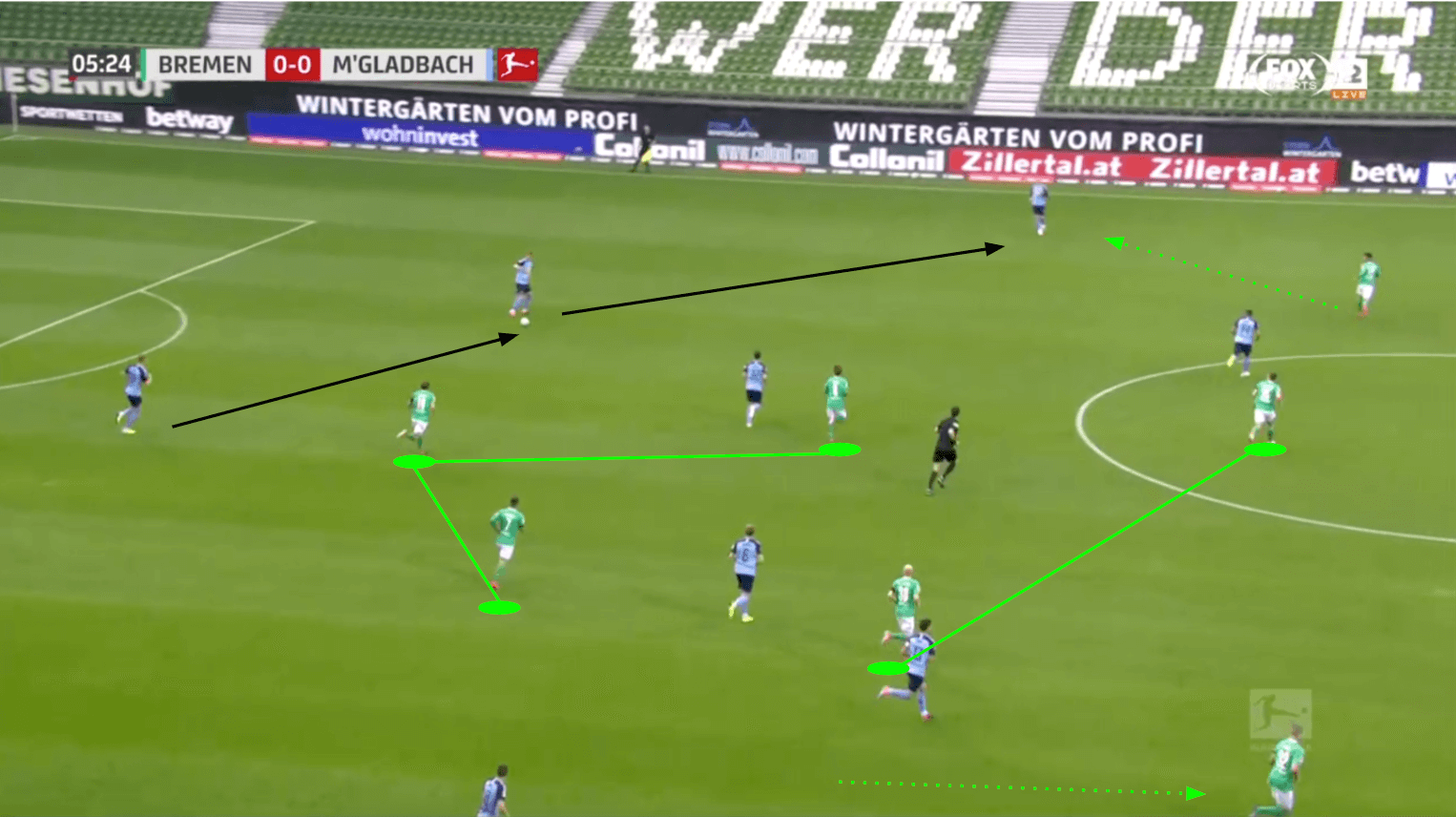 In the image above, Werder’s 5-2-3 to 4-3-3 is highlighted. The ball initially began on the right side of the pitch, where Friedl was pressing the Gladbach player on the ball. As Gladbach moved the ball across the pitch, the front three of Werder found that triangular shape, which prevented any Gladbach passes to the interior parts of the pitch. Friedl, on the left side, would retreat into the back line as Gebre Selassie would step up to provide pressure on Gladbach’s winger. This compact shape really frustrated Gladbach because it prevented them from building up through both the middle and the wings with ease.

Even when defending in their own half, Werder opted for this 5-2-3 shape. The simplicity of just compressing and compacting their shape seemed to work for Werder. From a coaching standpoint, this obviously reduced the number of instructions that Kohfeldt had to give his players, while also reducing the number of decisions a player would have to make. 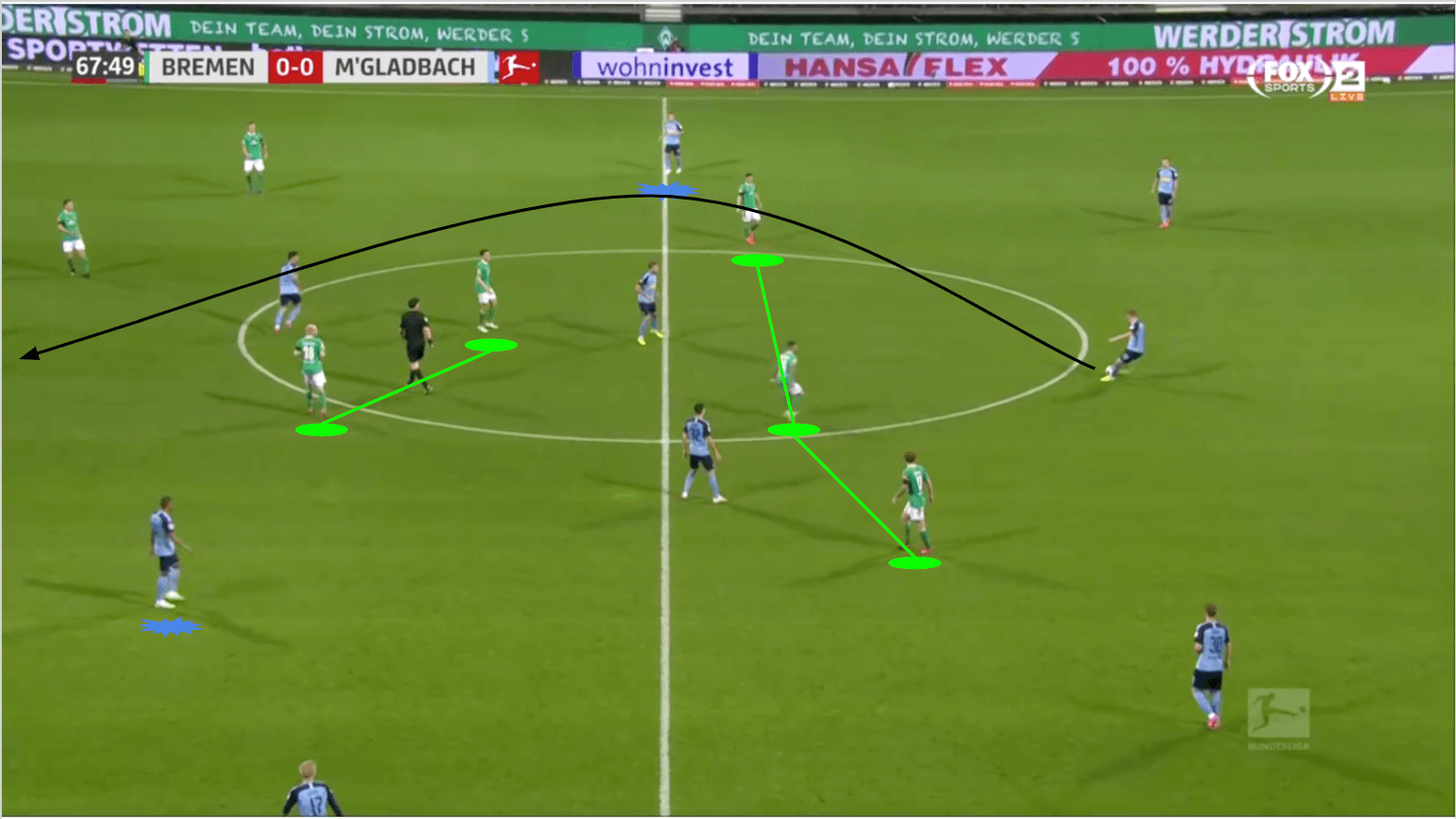 Here, Werder had found their shape, this time in their own half. The front three have spread out as opposed to the triangle they had previously found. What makes their movement effective is that they’re not spread out too wide, so it’s incredibly difficult to play passes between those three into the centre of the pitch. The Gladbach players marked with blue are technically open in space; however, the cover shadows of the Werder front three prevented them from receiving any pass that wasn’t lofted. The two midfielders, Klaassen and Eggestein, were compact and close to both their front three and their back five. This eliminated room between the lines for Gladbach to receive the ball, making it incredibly challenging for them to progress forward.

These defensive structures continued to frustrate Gladbach all match, and their press in particular almost led to a goal. 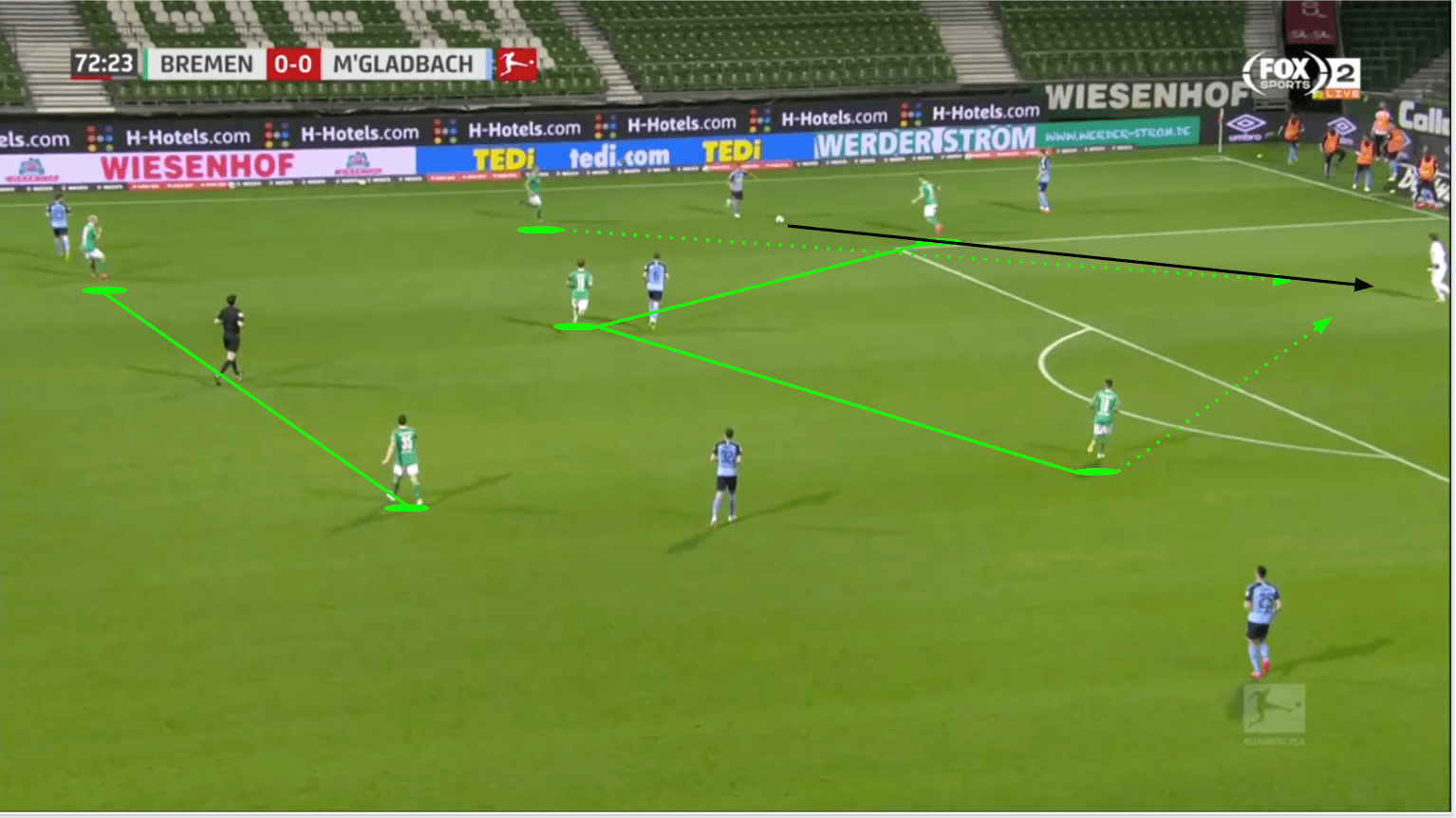 As Gladbach continued to have men drop down to receive the ball in their build-up, Werder’s wingers followed, allowing Friedl to press his man, Lainer, at a very high speed. Lainer panicked and looked to play the ball back to Sommer. Friedl didn’t break his stride and Leonardo Bittencourt, who had subbed on, pressed as well. Despite dispossessing the goalkeeper in his own penalty area, Werder were unable to finish the chance, with Sargent’s shot being blocked by Lainer before Gladbach cleared the ball out.

The effectiveness of Werder’s press likely threw Gladbach off initially, but they used multiple strategies in order to attempt to break Werder’s press and get in on goal. Due to the nature of the 5-2-3 press, most of the space comes in and around the half-space, just outside the two central Werder players, who would still be looking to press those areas. 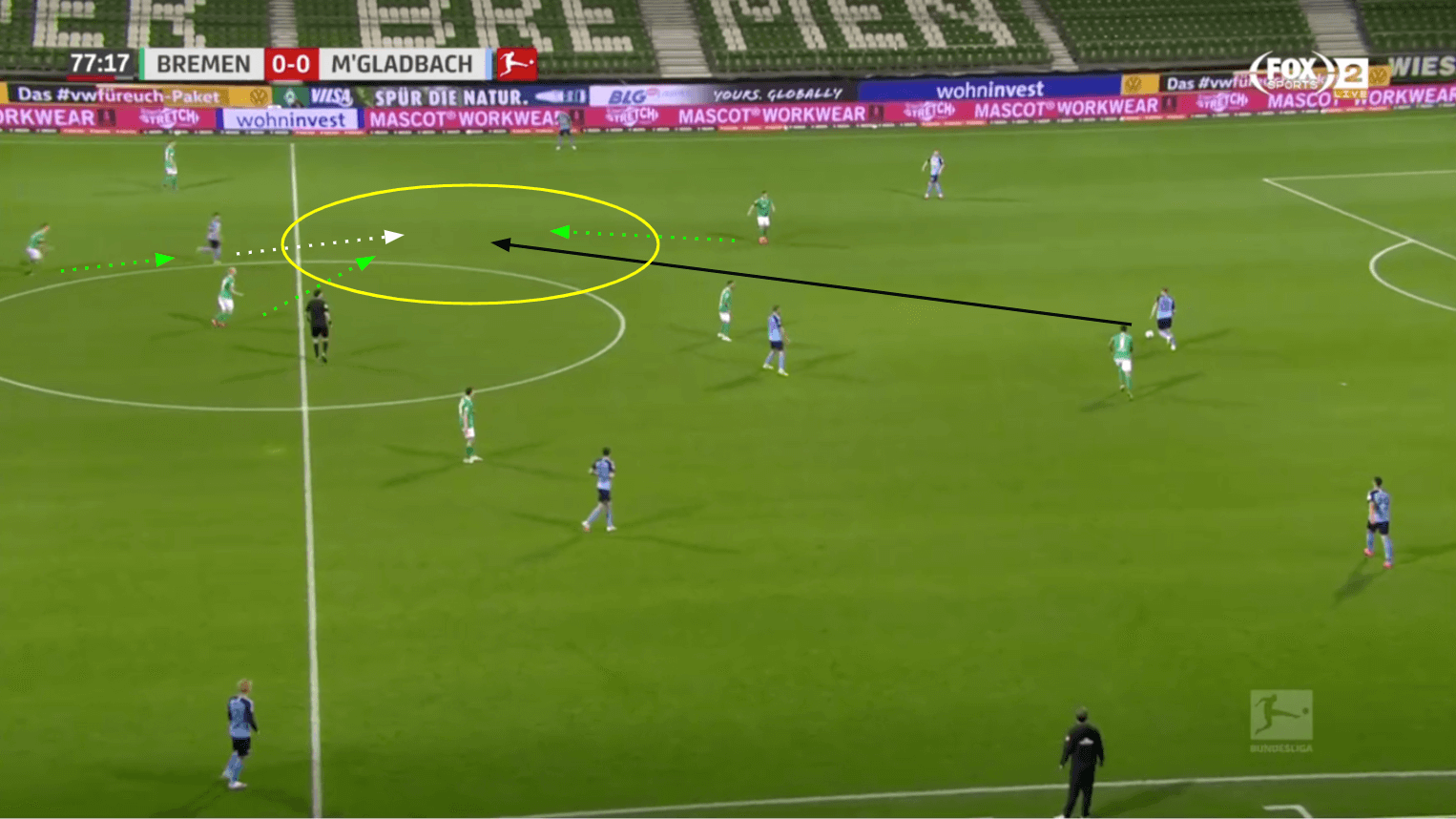 Here, a pocket of space had clearly opened up as Gladbach was in possession in their own half. Accordingly, Jonas Hofmann, who came on as a sub, dropped into the space in order to receive the pass from Matthias Ginter. As Hofmann dropped down, he was followed by Niklas Moisander. When the ball arrived at Hofmann’s feet, he was pressed by Moisander, Klaassen, and Rashica, giving him very little chance to do anything with the ball besides playing it back to a centre-back.

Even when Gladbach were able to receive the ball in those spaces, they still struggled to successfully progress up the pitch. 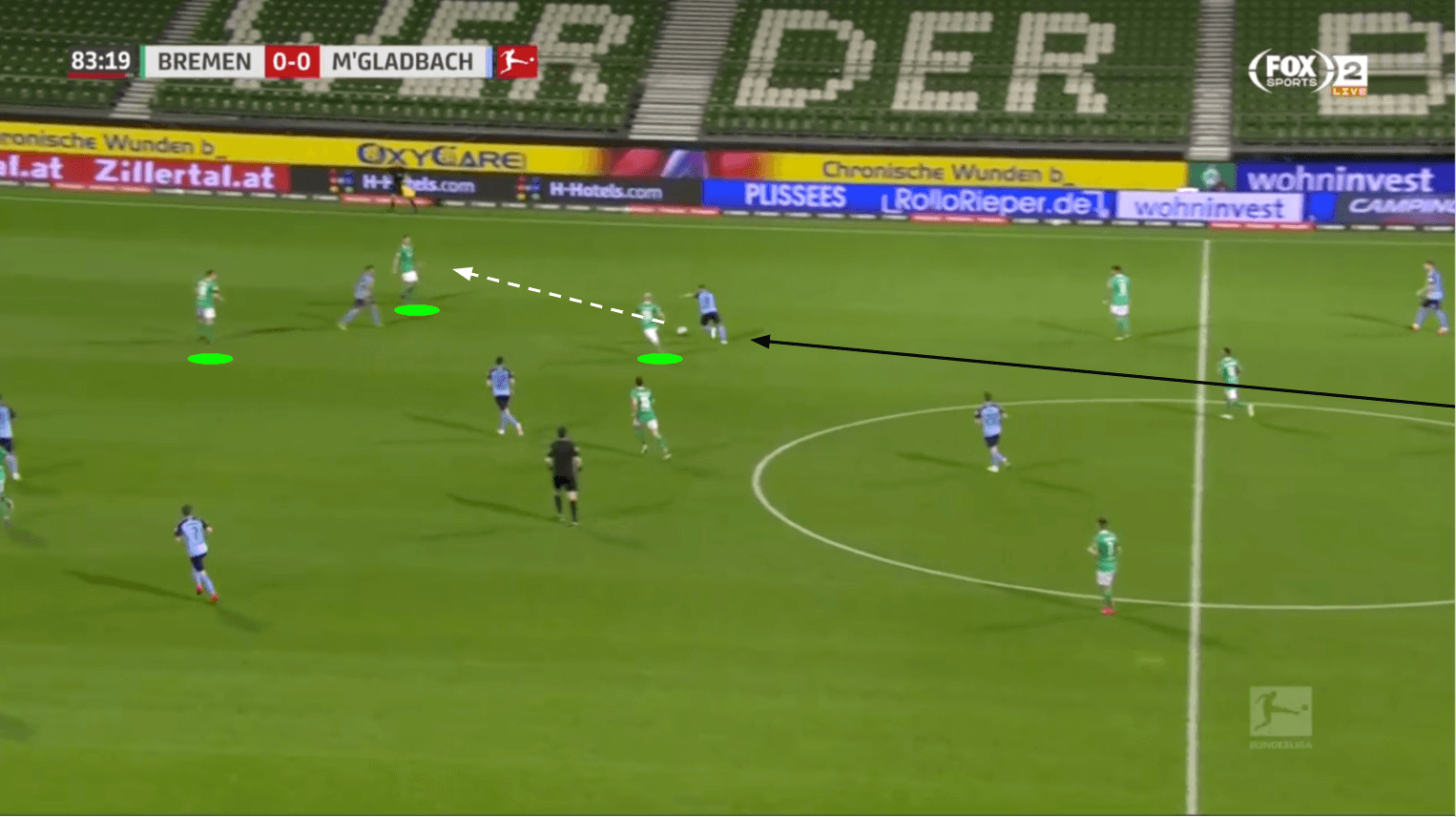 In the image above, Lainer received a well-hit pass from Ginter and was able to turn as he received the ball. This alone was an ideal situation that didn’t happen consistently, as the pass needed to be placed at the back foot with enough room for the receiver to turn. As Lainer turned, Klaassen began to close him down, forcing Lainer to take his dribble out wide rather than towards the goal. As Lainer continued his dribble forward, he was then met with a numerical overload, with three Werder players compared to two Gladbach players. With limited options, there wasn’t much Lainer could do except chip the ball into the penalty box. While his pass was successful, it found Pléa on a diagonal run, already well-marked by a Werder defender. 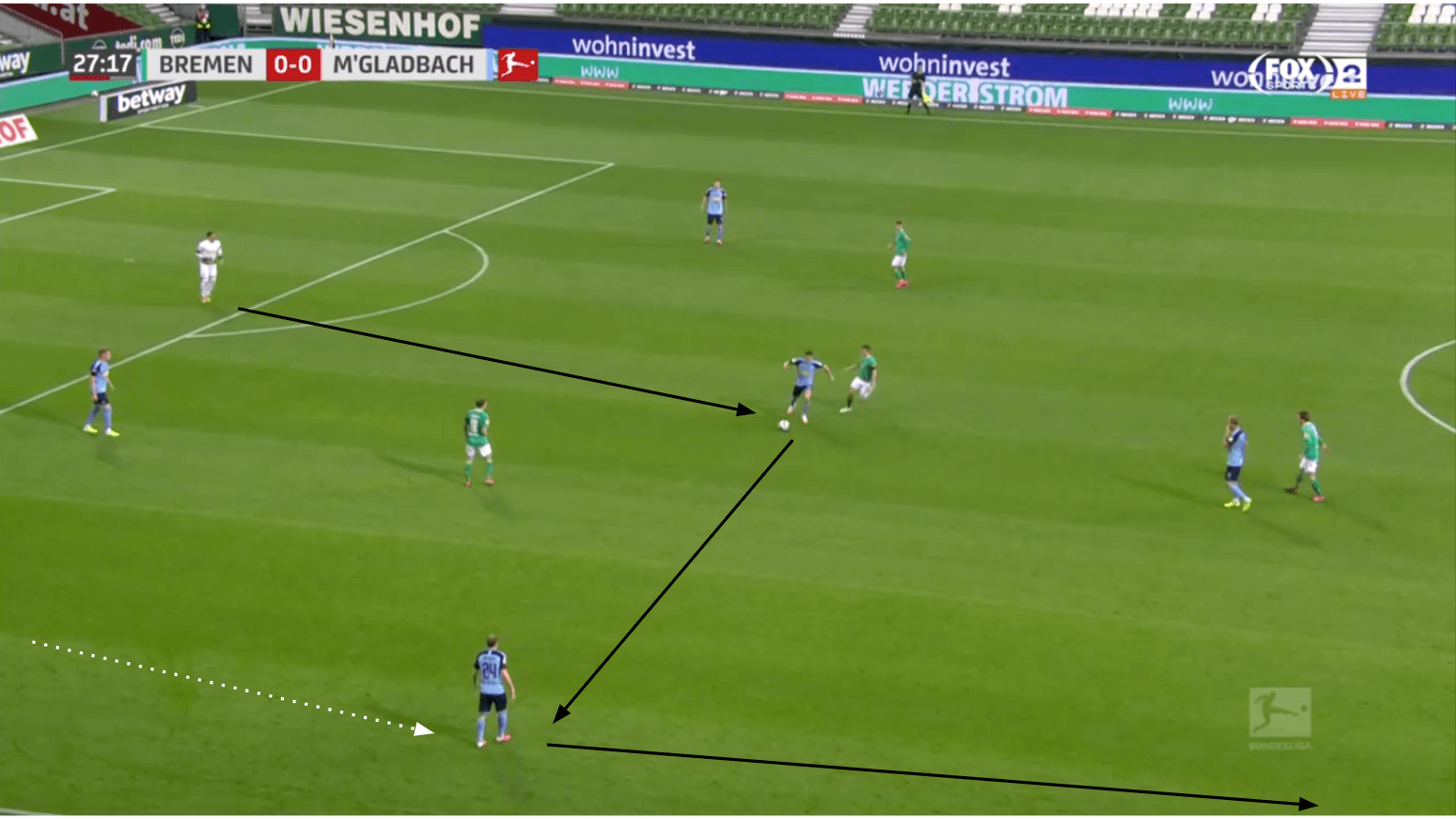 Gladbach’s best bet in breaking Werder’s press came when they were able to get one of their centre-backs past the Werder press. This created an extra man in the middle of the pitch, which caused problems for Werder’s press as they only really had two central midfielders available to defend. If their wing-backs would have stepped up, they would have left a more skilled attacker open to receive a pass. In the instance above, Tony Jantschke stepped forward into the midfield to receive a pass from Neuhaus. Jantschke was open in space, so he had time to pick out a target higher up the pitch. However, the majority of these passes ended up being towards the corner, where whoever would receive them, in this case, it was Thuram, was quite isolated and unable to do anything with the possession.

As the match continued, Werder continued to grow in confidence. Understandably, they began to attack more as the match drew to an end, sending men forward as they looked to steal a goal at the death. Their attacking set-up, albeit a little impatient at times, did create multiple chances for them, but they were unable to finish any of these. The main thing that Bremen tried to do was get the ball to players in between lines of defensive pressure, particularly before Gladbach had time to organise defensively. This allowed them to get men into dangerous scoring positions quickly, opening up passing lanes and options in the process. 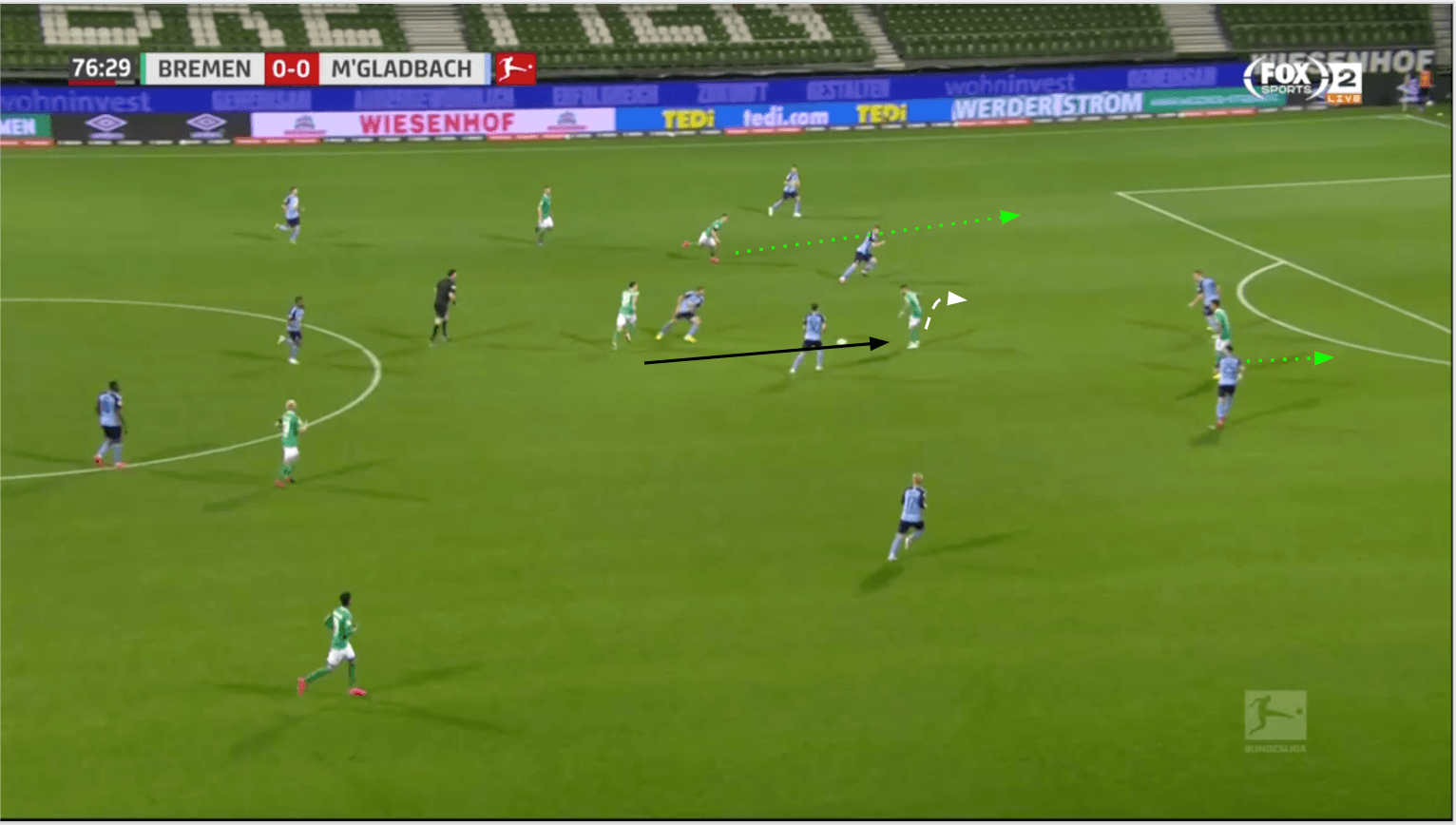 Here, Werder was able to get the ball to Bittencourt’s feet quickly. Bittencourt was unmarked due to Davie Selke’s positioning between the two centre-backs. Neither of the centre-backs can move, otherwise, Selke will be open in space. Rashica’s run down the left half-space also attracted the attention of Elvedi, so he was unable to apply pressure on Bittencourt. This allowed Bittencourt to line up a powerful shot, which he just sent over the bar.

Moments later, Bremen again took advantage of having men in between the lines in order to create a chance at goal. 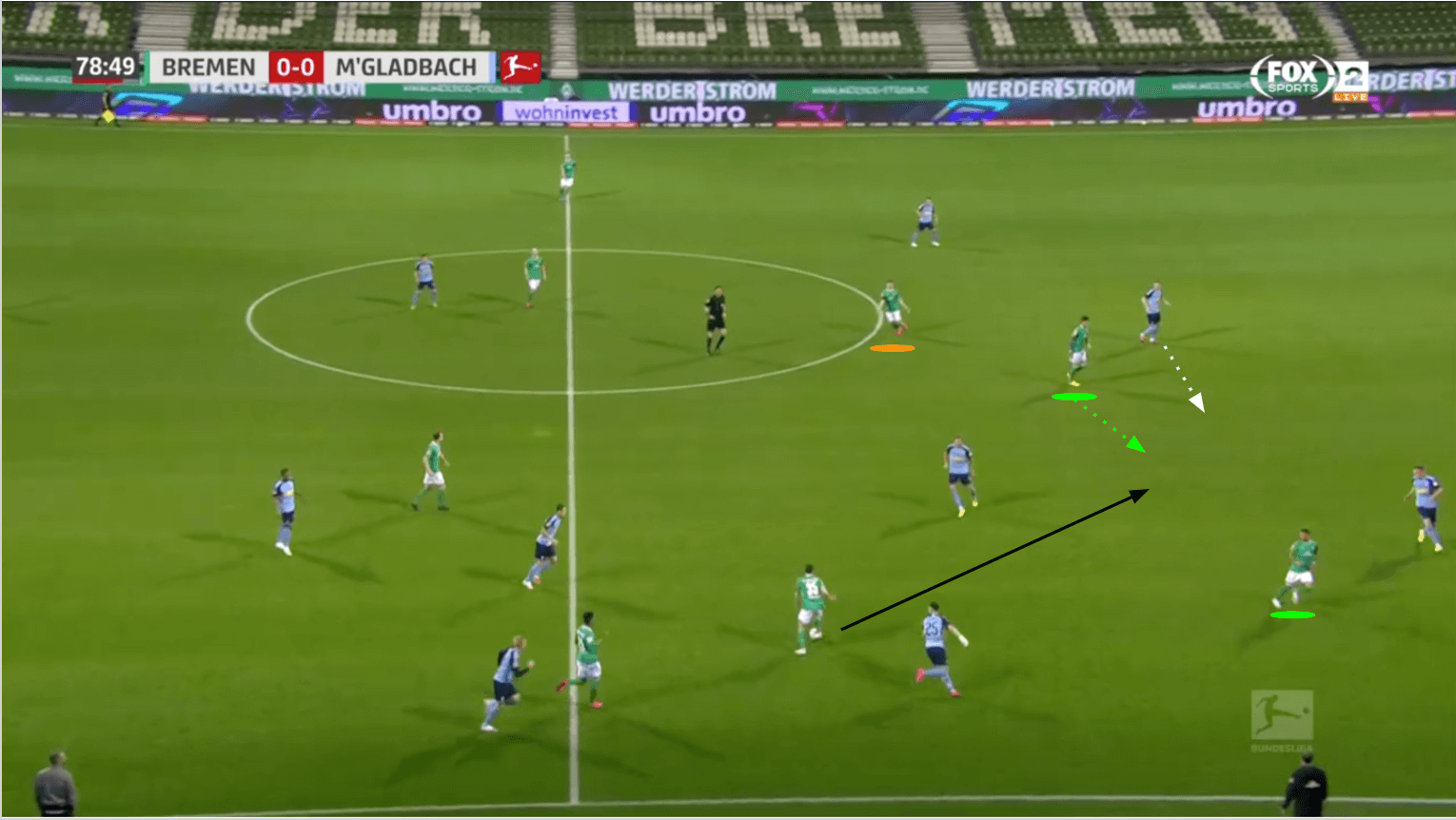 Werder had three men in between the somewhat disorganised lines of pressure, marked above in the image. Eggestein had done really well to evade four Gladbach defenders and play his pass to Selke, who attracted the attention of the centre-back. This run opened up a lot of room for Rashica, marked with the orange circle, to receive the ball in the centre of the pitch. As he did, Klaassen made a great overlapping run and was able to drive the ball across the face of goal, but none of the Werder attackers were there to tap it in. Despite not scoring in the match, Werder should leave it knowing that they have the ability to create scoring chances. They’re going to need to start taking advantage of those if they hope to remain in the Bundesliga next season.

While neither team was able to secure all three points, the share of the spoils seemed to be most fair. Werder did well to shut Gladbach out, as they have averaged 1.89 goals per Bundesliga match this season. This is particularly impressive considering the fact that Werder have allowed 2.18 goals per match this Bundesliga season. Gladbach will certainly feel lucky to have escaped with a point, with much of Bremen’s most dangerous chances coming towards the end of the 90 minutes. Both teams will look to add to their point total this weekend, as Gladbach take on Union Berlin while Werder will look to take points from David Wagner’s Schalke.