On game day 28 in this year’s Bundesliga, Eintracht Frankfurt hosted Freiburg. It was an important game for the home team, as Frankfurt were four points up on 16th-placed Fortuna Düsseldorf. In order to avoid relegation, a win over Freiburg would have come in handy. 7th-placed Freiburg, on the other hand, have an eye on the qualification for next year’s Europa League. In an intense Bundesliga game, both teams showed a great game, ending in a 3-3 draw.

In our tactical analysis, we will examine the tactics of both Adi Hütter from Frankfurt and Christian Streich from Freiburg. Our analysis will show the reason for this spectacular draw. Looking at the lineups, we see that Frankfurt, on paper, chose a 3-5-2 formation. However, they occasionally played in a 4-4-2- like formation with Filip Kostić pushing extremely high on the left wing.

Freiburg’s 4-2-3-1 also changed into a 4-4-2 from time to time, when Lucas Höler moved up next to Luca Waldschmidt.

Possession-wise, Frankfurt clearly had the upper hand with 58% to 42%. They played 539 passes in total, while Freiburg only reached 326. Frankfurt were also able to convert possession into goal opportunities. 35-10 shots in favour of Frankfurt speaks for itself. When it comes to expected goals, the difference is astonishing: while Frankfurt were expected to score 4.30 goals, Freiburg were only expected to score 0.76. Yet the game ended in a 3-3 draw.

Offensively, Frankfurt were poor in converting their opportunities, while Freiburg keeper Alexander Schwolow had a great game as well. Often enough, Freiburg were not able to prevent Frankfurt from creating chances. 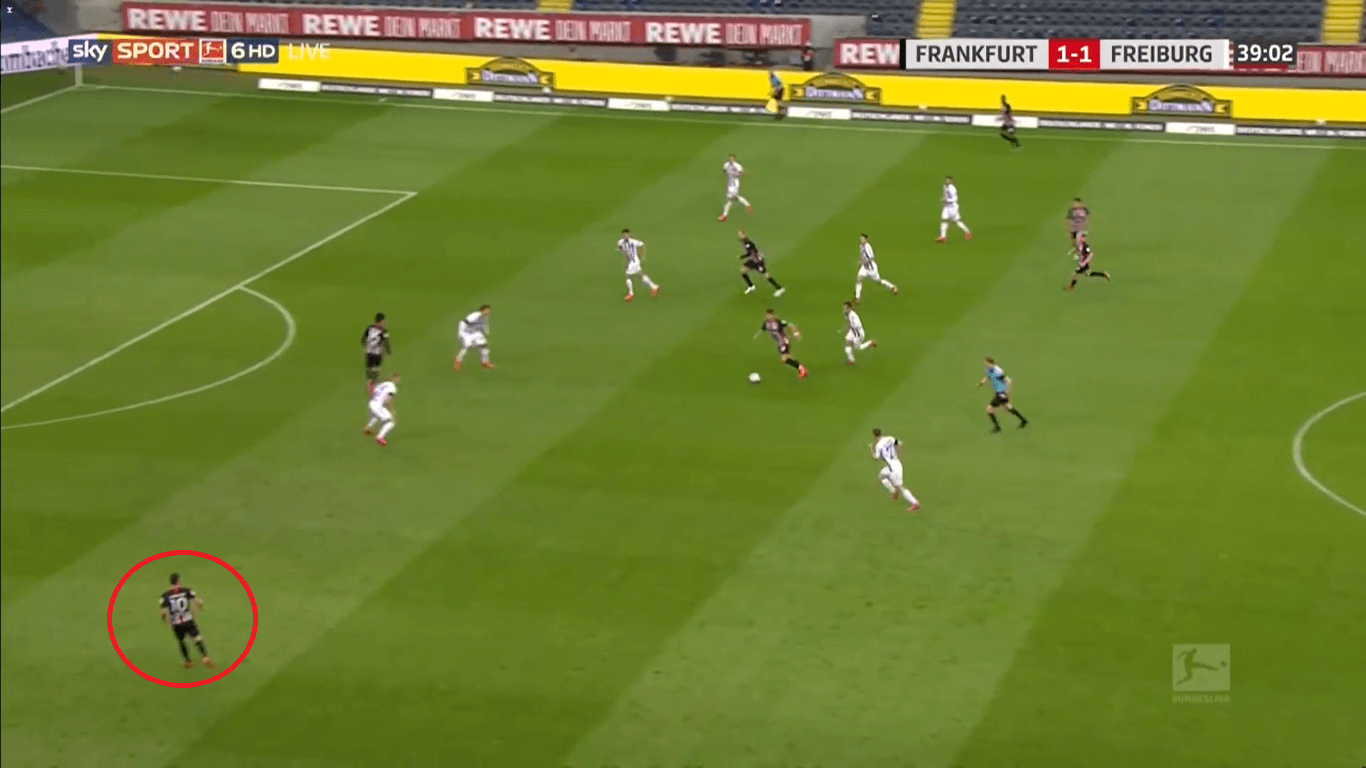 Here is a great example of Freiburg’s problems. In the centre, Frankfurt players often had too much space and were able to come through. As a consequence, the defensive line concentrated on closing the centre, while Frankfurt could then attack on the wing, in this case with Kostić. His shot was not good enough to beat Schwolow though. Similarly, we have another situation where Frankfurt have too much space and time in the centre. Freiburg have huge problems to defend the space in front of the back line, especially as there are only two midfielders who were able to come back in time. The transition from offence to defence did not work at all. With right wing-back Almamy Touré bombing down the wing, Freiburg also had to cover the wing. This caused additional problems, as left midfielder Vincenzo Grifo is one of the players not helping out the defence. If we look at the space between the left centre-back and the left-back, it does not come as a surprise that Freiburg defended so poorly stats-wise. Even here, when seemingly everything is under control, Frankfurt were able to create a one vs one situation against Schwolow only five seconds later, combining through the centre. 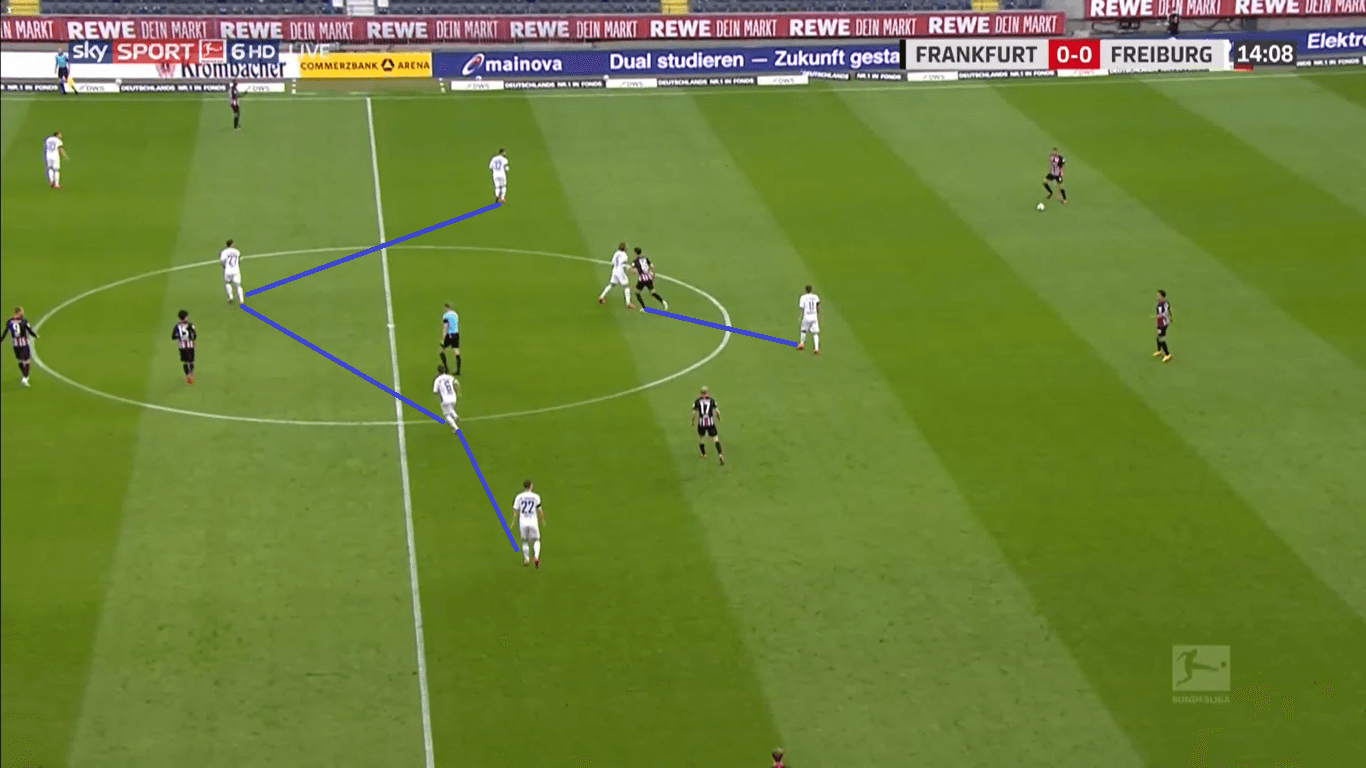 When Frankfurt lowered the tempo of the game, Freiburg decided to drop back as well. They did not intend to play any high press, they focused on closing the centre. The two strikers up front tried to prevent passes to the defensive midfielders, while the midfield line covered the space near the halfway line. When it was not possible to combine through, Frankfurt would use the long ball as well though. Thus, they were not particularly interested in providing more numbers near the ball. In the final third, Freiburg similarly concentrated on defending the space rather than putting pressure on the ball. When the cross is played though, Frankfurt have a 3-3 equality in the box and Kostić just outside the box waiting for the second ball. Freiburg’s midfielders are not marking anything at all in that situation. Still, Frankfurt were not able to take advantage as they should have.

Freiburg have difficulties against Frankfurt’s pressing

Frankfurt, on the other hand, were able to put a lot of pressure onto Freiburg’s build-up. As soon as left centre-back Manuel Gulde received the ball, André Silva pressed him. He attacks him slightly from Gulde’s left, who instinctively plays the ball back to his partner Robin Koch. Freiburg’s left-back Christian Günter is wide open, but Freiburg are forced into the right half-space. Bas Dost immediately sprints towards Koch to put pressure on him. Kostić also positions himself near the two strikers, which turns the 3-5-2 more to a 4-3-3-like structure in this case. 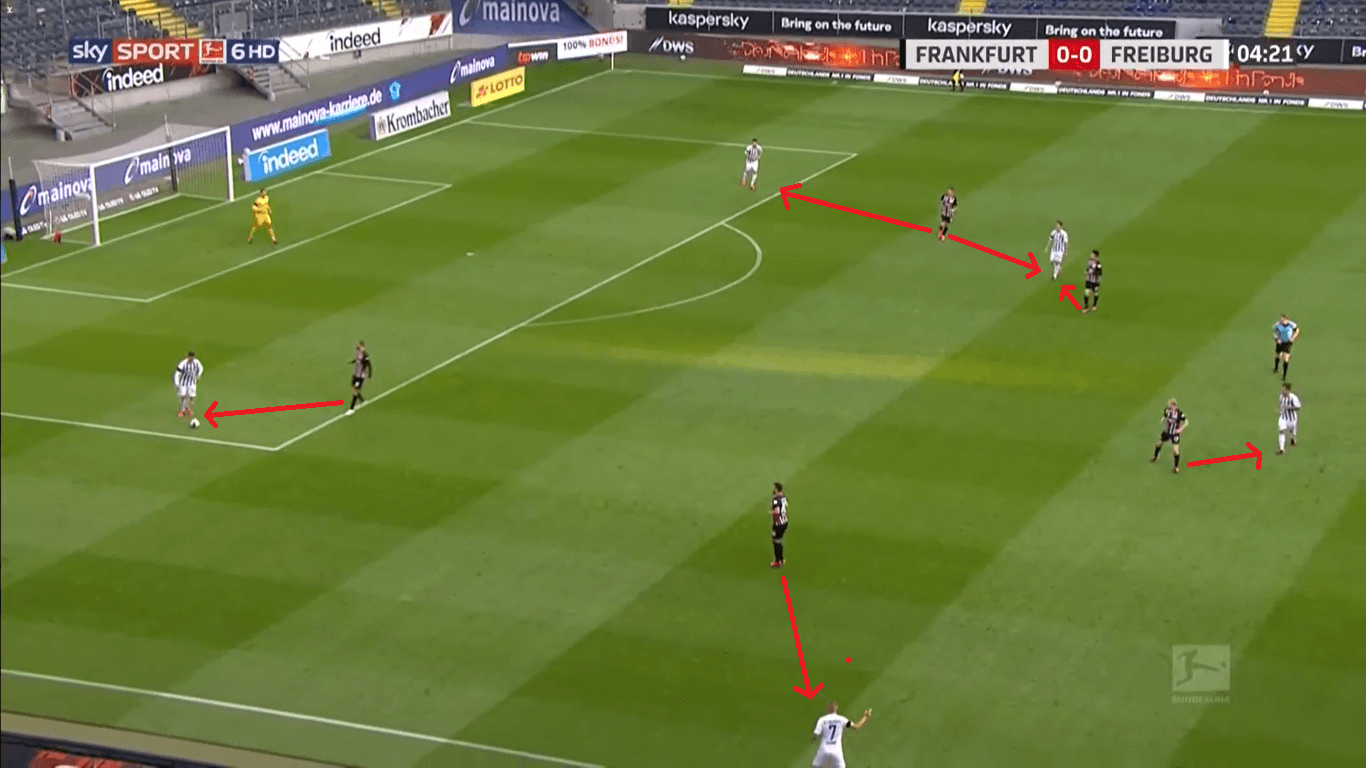 In most cases, Frankfurt pressed in a man-oriented way, with every player marking an opponent as tightly as possible in order to force a long ball. Freiburg have no passing option and are forced to play it long. Almost always, Freiburg played the long ball when pressed, but in the 79th minute, they did a crucial mistake. Koch lost the ball near the box under immense pressure. Frankfurt were able to score the 2-3.

Even though Frankfurt were able to press intensely, they were slightly insecure defending deeper. 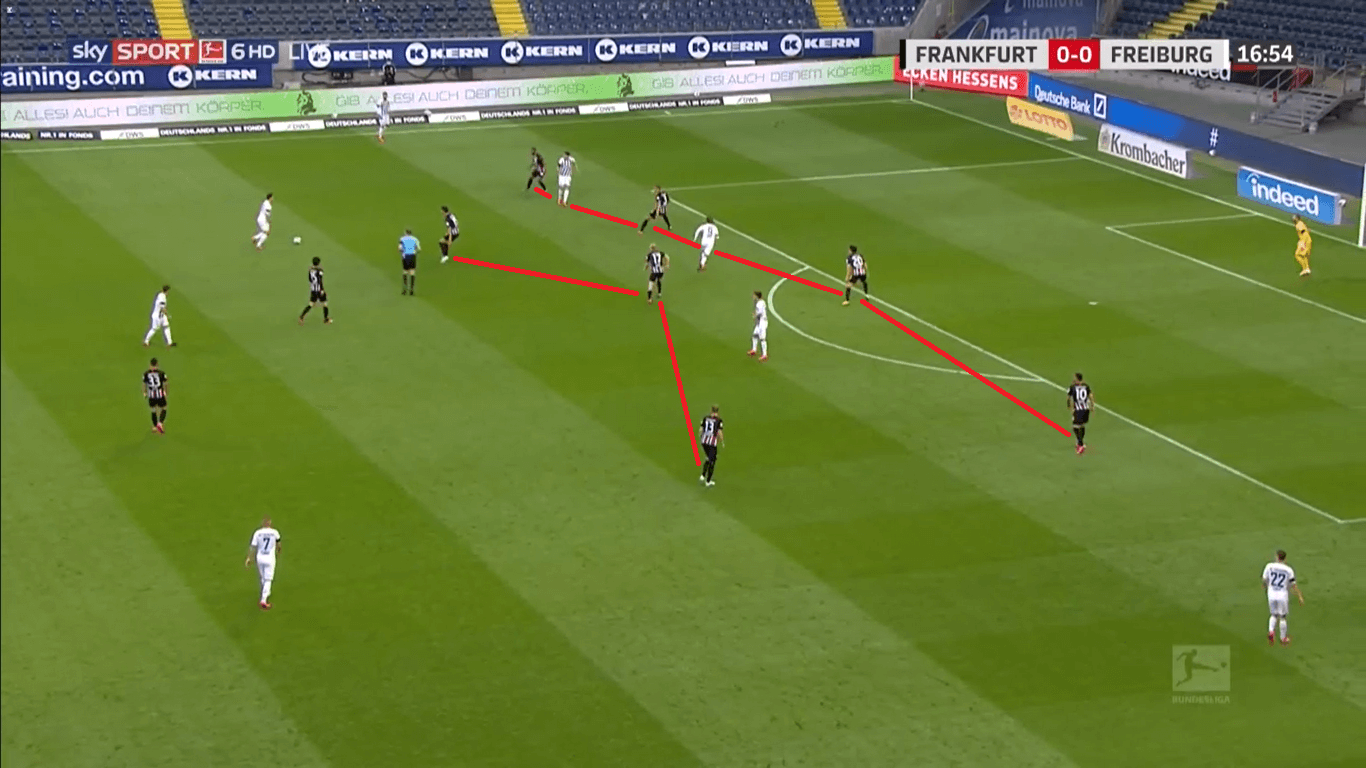 Here, similar to the position when Freiburg seemed to have everything under control, Frankfurt also seem to defend properly. They cover the centre, while the wings are open. However, with only seven out of ten players behind the ball, it can be said that they could have defended more compactly. This was especially costly when Grifo exploited the huge distance between right centre-back Stephan Ilsanker and right wing-back Touré. Again, Frankfurt were not able to maintain compactness in their back line. Grifo was able to exploit this and score the opening goal of the evening. The third goal for Freiburg was scored with a counterattack. While we criticised Freiburg earlier on for their weak defensive transition game, this time it is the other way round. Freiburg started a quick counterattack, while Frankfurt seemed helpless to stop it. 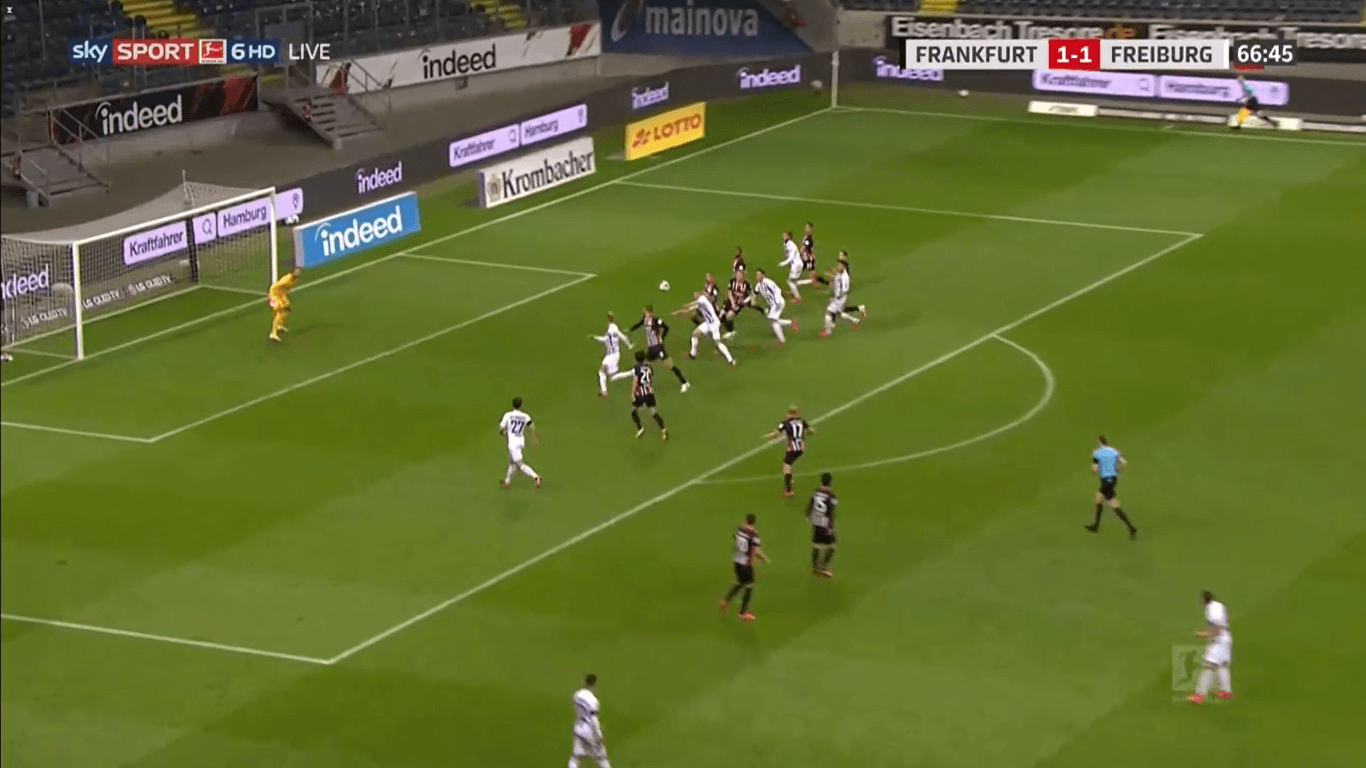 With Freiburg’s second goal coming from a set-piece, it seems clear how the huge discrepancy in expected and actual goals for Freiburg occurred. Frankfurt defended poorly in this situation, as they were not able to mark Nils Petersen tightly.

Nonetheless, Frankfurt deserve applause for their strong mentality, as they did not give up, but rather fought their way back into the match to clinch a point. They were able to score in the 83rd minute when Timothy Chandler was able to score after a cross. 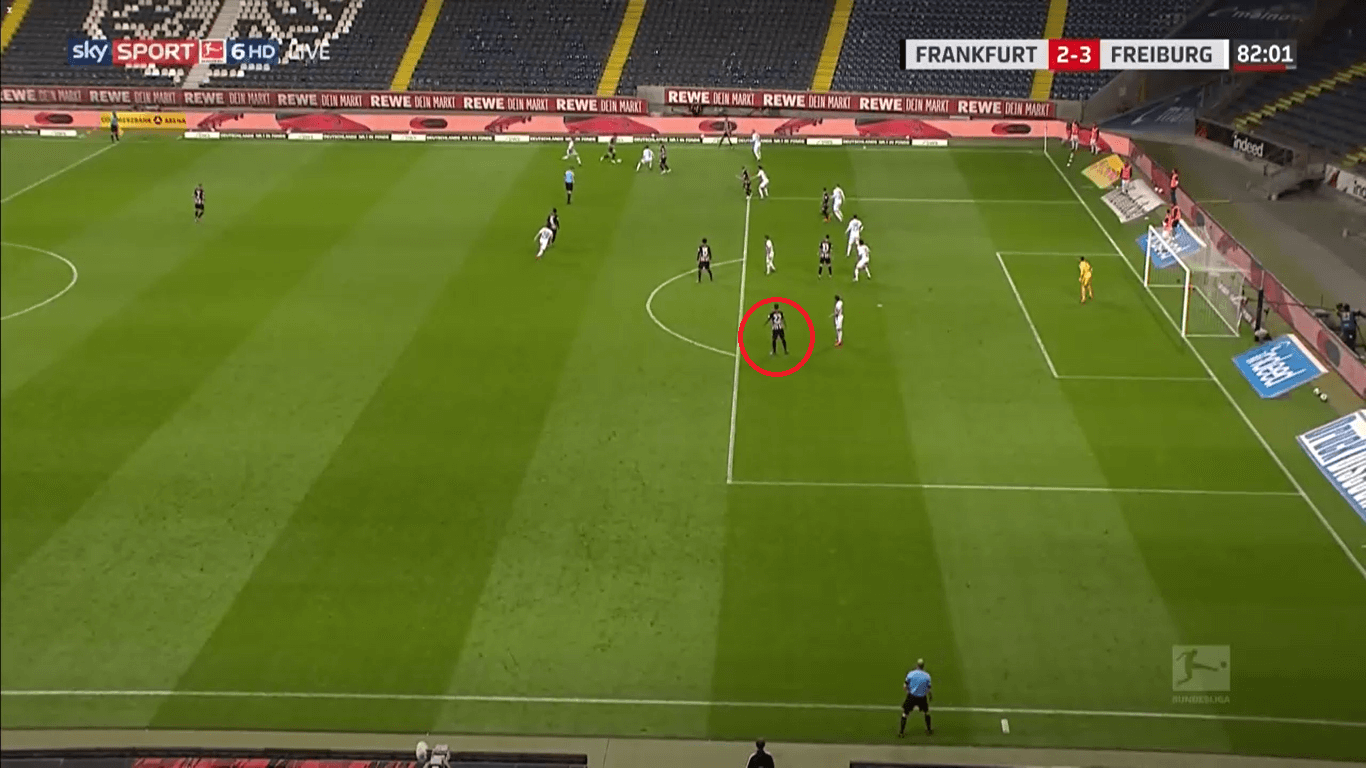 Ironically, this is one of those positions where Freiburg defended properly. If we look at the image above, there is simply nothing that Freiburg could have done better in terms of positioning or tactics. Sometimes, it just comes down to individual contribution, in this case, Chandler’s strong anticipation and reaction when he sensed where the ball would be crossed to.

From a tactical standpoint, the outcome of this game was rather strange. Frankfurt played a great game, while Freiburg had one of their poorer days. Under normal circumstances, Frankfurt would have won this by a two or even three-goal margin. In the end, they were happy to save a point, as they were down by two goals at one point.

Our tactical analysis showed that Frankfurt just did tiny mistakes for which they had to pay a huge price. Overall, they were clearly the better team though and deserved a win. Freiburg, on the other hand, can be happy with one point. They were far away from their usual performance. If Christian Streich wants his team to play in Europe next year, they need to play much better.