Due to the cluster of teams separated by the smallest of margins, it appears that every week we have more than one fixture with potential title implications in the Bundesliga. RB Leipzig welcomed Wolfsburg with just one point being the difference in league standings between the two sides.

Oliver Glasner’s Wolfsburg side are building a reputation for being difficult to break down having conceded only four goals in their seven league games going into this fixture.

Whereas Julian Nagelsmann’s Leipzig have been one of the more free-flowing sides in the league, having scored 15 goals from their first seven league games and conceding just seven goals going into this game.

It ended 1-1 with Leipzig going ahead through Timo Werner in the 54th minute before Wout Weghorst equalised late on.

This tactical analysis focuses on the tactics used by both Glasner and Nagelsmann as their sides fought out a draw. 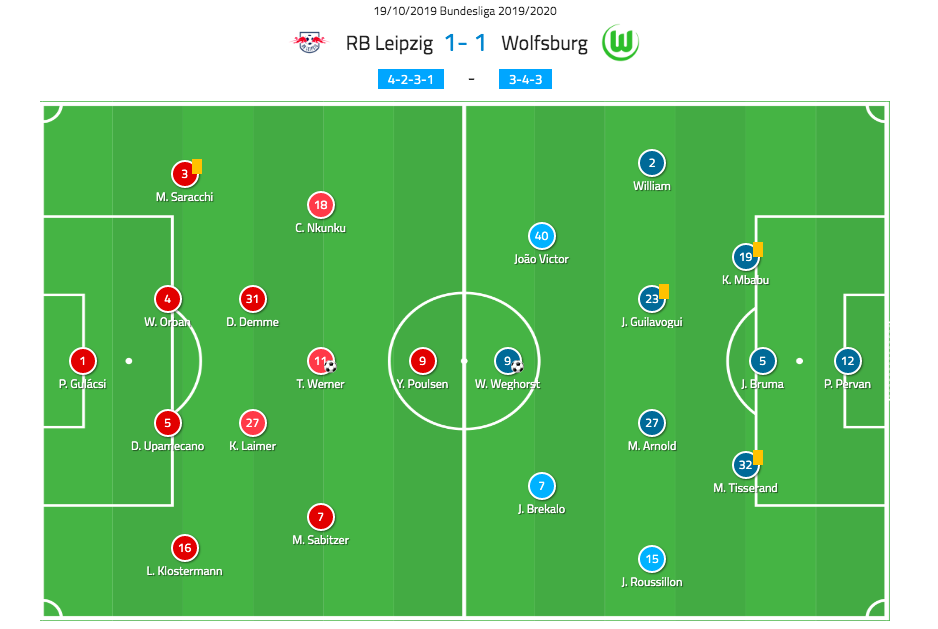 Leipzig fielded a 4-2-3-1 with Werner dropping behind Yussuf Poulsen to sit in front of two holding midfielders, Diego Demme and Konrad Laimer. Marcel Sabitzer and Christopher Nkunku played as Leipzig’s two wide forwards, who would drop into midfield when defending to create a midfield five. However, when Leipzig pushed forward they were expected to push high and support Poulsen, creating a front three.

Wolfsburg, as ever, fielded a 3-4-3 with Weghorst sitting the highest of their front-three, which included João Victor and Josip Brekalo. Kevin Mbabu found himself in the starting lineup playing as part of a back-three with Jeffrey Bruma and Marcel Tisserand. Due to William’s excellent form in the right wing-back position for Wolfsburg, opportunities have been limited for the Swiss international since his summer arrival.

In the above image, we are able to see how the formations changed slightly as the game progressed. Nagelsmann pushed Nkunku higher, at times playing alongside Poulsen. In doing so, he was able to ensure the highly-influential William dropped back deeper to protect his back three. Whenever William went forward in attack, Nkunku was the outlet for Leipzig to counter from. The image below shows that all four of Leipzig’s counter-attacks on the day came from Nkunku’s left-flank. 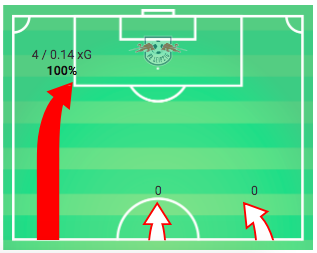 The game started at a high pace with Wolfsburg pressing Leipzig across the pitch. The front three of Weghorst, João Victor, and Brekalo worked in tandem to prevent Leipzig from being able to play out from the back. Leipzig were continually forced to play long balls in order to work the ball forward. Any backwards pass was a trigger for Wolfsburg to press. It worked in stopping Leipzig from settling into a rhythm with their buildup play, but they were nevertheless the better team in the opening stages regardless of this impact.

Wolfsburg pressed high throughout the game. Their 7.81 PPDA shows their dedication to win the ball back early.

However, the image below shows the greater intensity in their press following Leipzig’s goal. This intense press paid off for Wolfsburg, as the mounting pressure finally ended with an equaliser. 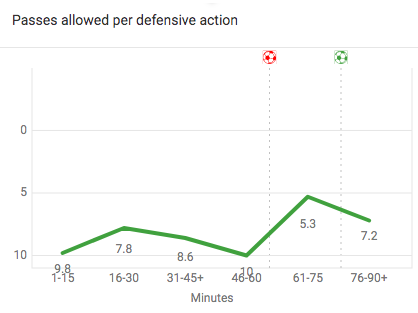 Glasner’s side worked incredibly hard throughout the game defensively and were more than just an energetic pressing side. Their defensive shape in deeper positions was intelligent and prevented Leipzig from taking high percentage shots from central areas. In the case that Leipzig broke the high press, or the ball started from an area inside Wolfsburg’s half, either through a free-kick or throw-in, Wolfsburg remained compact. The image below shows how Weghorst is their furthest man forward but is only 20 yards away from their defence.

Wolfsburg wouldn’t let Leipzig break their lines in central areas, but were more than happy to let a ball-carrier break their lines if they were to drive into wider areas. In the image above, Brekalo merely ensures to stay inside the ball-carrier, closing off any passing options in central areas. Tisserand is able to come out of defence knowing that his defence will slide across and cover him. His intention is to press the ball, ideally winning it back, or allowing Leipzig to play into the wings.

Glasner foresaw that Leipzig would seek to attack Wolfsburg’s wing-backs, and not only had a plan in place to deal with this but also encouraged it. Wolfsburg packed their own box and Leipzig had little joy with their crossing throughout the afternoon. Only seven of their 22 attempted crosses met their target.

In the below analysis there are eight Wolfsburg players in the box as Leipzig look to cross. Not only does this give them a heavy advantage in any aerial duels, but Glasner was also keen to ensure that Leipzig didn’t pick up any second balls within the box that the likes of Poulsen, Sabitzer and Werner, three terrific finishers, could pounce on.

Leipzig’s change of attack in the second half

The first half saw Leipzig dominate possession. Despite this possession, they struggled to create clear cut chances and over the game managed just 38.46% of their shots on target.

Yet in the second half, as the image below shows, they conceded more possession. This was a tactical move from Julian Nagelsmann. 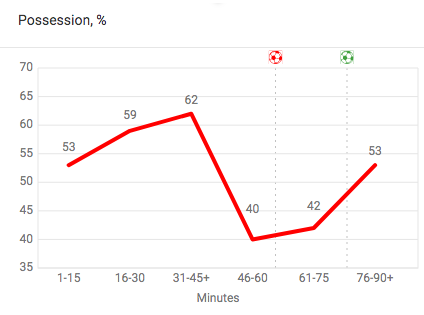 Throughout the first half, Nagelsmann was able to see how wide Wolfsburg’s back three were when Wolfsburg attacked, and how slow they were to regroup in the event of a ball being lost in an advanced position. In order to exploit this, Leipzig wanted to invite more pressure onto themselves and catch Wolfsburg’s back three cold with a simple long ball. They did exactly this and soaked up attacks from the visitors in the opening moments of the second half.

Péter Gulácsi was instructed to play more directly and launch direct balls towards Poulsen. Werner, from his number 10 role, moved close to Poulsen as these balls were played long, looking to feed off of any flick-ons from Poulsen into the space behind the Wolfsburg back three. With Werner’s considerable pace, Wolfsburg would have no chance of catching him should their back-three be too far away from one another in such a situation.

It was how Leipzig broke the deadlock. Mbabu was too slow to cover Jeffrey Bruma, who missed the header altogether. Neither of Bruma’s two centre-back teammates were deep enough to cover him in case he missed the header, and this was what created the space for Werner to move into. The forward was able to run onto the ball over the top and score. Glasner would have been furious that all of Wolfsburg’s terrific defensive work was undone by such a simple goal.

Wolfsburg predominantly looked to play down the right side of the pitch. This wasn’t unexpected. William has been outstanding thus far this season, and Wolfsburg again looked to use the attacking wing-back as the catalyst for many of their attacks. He was excellent throughout the game, providing width in attack, completing 67% of his crosses, and notching an assist. 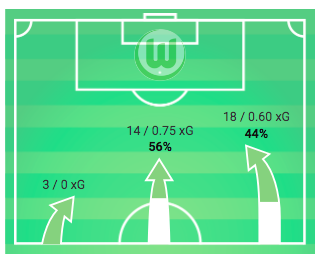 William linked well with João Victor throughout the day. João Victor would often take high positions close to Weghorst, and as William carried the ball forward would drop into the half-space to link with the wing-back and help get him in behind the Leipzig defence. By dropping into this space he ensured he could receive, but by doing so also drew Willi Orban further forward and made William’s chances of meeting Weghorst with a cross far easier.

However, Wolfsburg were far from a side that looked to solely play out from the back. In fact, it could be argued they were a long ball side for much of the game. Overall, 15.76% of Wolfsburg’s passes were long balls.

Weghorst is an excellent target man, and Glasner sought to play directly into him whenever possible. As Wolfsburg played out from the back, the central-midfield partnership of Josuha Guilavagoui and Maximilian Arnold didn’t seek to drop deep, rather staying high ready to pick up any knockdowns from Weghorst. They used this tactic throughout the game, and in the 15 minutes preceding half-time, 24% of their passes were long.

Yet Wolfsburg arguably looked more dangerous when using the long ball more sparingly. Once Wolfsburg went behind, Glasner’s side became less and less direct and this was the period of the game where Wolfsburg really began to dominate. In fact, in the 15 minutes following Leipzig’s goal, just six% of Wolfsburg’s passes were long balls. This was a stark contrast to their tactics for the rest of the game. 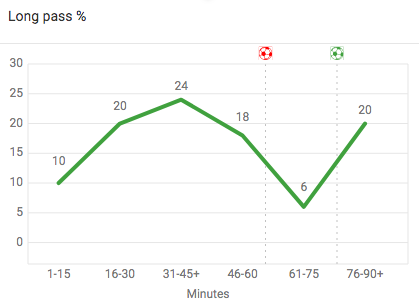 Guilavogui and Arnold started to drop deeper and link up with the back three, and in doing so created space for Wolfsburg’s wing-backs to penetrate out wide. Their equalizer started from playing out from the back in this way before a diagonal ball picked out William, who in turn found Weghorst in the box.

Weghorst is an intelligent forward and it was his decision to stay in an offside position and elude his marker as the ball was played into William’s right-flank that meant he was free to meet the cross and score.

Wolfsburg had the better of the chances and will feel hard done by not taking all three points, however, will be pleased to have picked up a point away at a potential title rival.

Leipzig started the game strongly but seemed to allow Wolfsburg to control the game after Werner had put them ahead. Leipzig were disappointing going forward and despite Werner scoring his sixth goal of the season were largely ineffectual in the final third. That’s as much a criticism of Leipzig as it is a compliment to Wolfsburg’s excellent defence, who are a big reason for the Wolves sitting in second place only by goal difference after eight games. They continue to be the only unbeaten side in the Bundesliga and with their next league game coming against Augsburg, it could be a run that continues for a little longer.