Anderlecht have had a disappointing start to the 2019/20 season, currently residing in 13th place, on just nine points from their first 10 games. However, their commitment to bringing young players into the starting line up has brought through several exciting youth prospects. While Yari Verschaeren and Jeremy Doku have both received much attention, Killian Sardella has also caught the eye, with some promising performances at right-back. This scout report provides a tactical analysis of the young right-back’s season thus far.

Sardella is a more defensive-minded right-back. He does get forward, but as we can see from the above heat map, it is rarely into advanced areas. Instead, he is often used deeper in attack as a ball-player, often beginning Anderlecht’s attacks.

Sardella is an excellent passer, with an 88% completion rating this season, and is therefore often used deeper in Anderlecht’s buildup play to help them play out from the back. In their 1-0 loss to Genk, he had a phenomenal 96% pass completion.

In the image below Sardella takes an unusually deep position as Anderlecht build an attack. In the top left of this analysis, we can see his right-winger, Doku, taking up an area that would often be occupied by a right-back. Sardella instead drops deep in line with his two centre-backs. 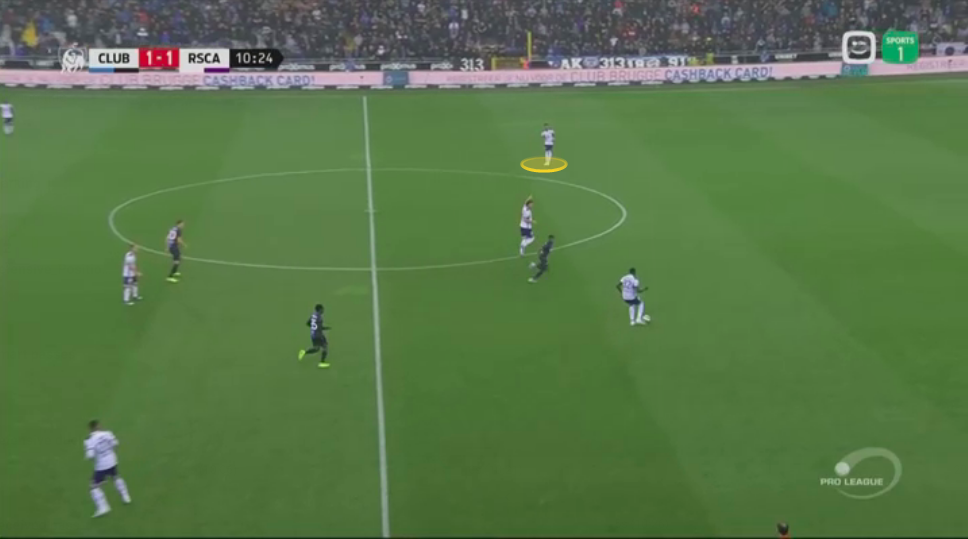 What is striking is his calmness in almost any situation, particularly for a player of such a tender age. He is incredibly composed on the ball when looking for a pass, but also possesses this composure in defence, assessing a situation, and looking at his own positioning.

Sardella often looks for passes that many players, let alone right-backs, would not. His passing ability is useful at breaking the lines against a side with a high-press, and he can thread the ball through a field of players to reach his target. 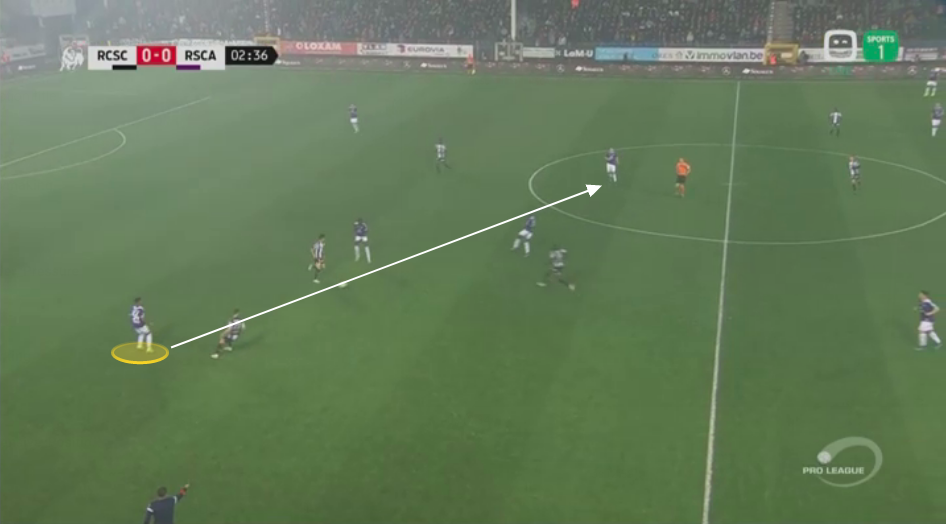 In attack, Sardella favours playing accurate cross-field balls to release the winger on the left flank, rather than bombing forward himself and looking to cross.

This season he has registered just 1.09 crosses per game, with a 30% completion. And he dribbles even less with only 0.99 dribbles per game. This is an area of his game he should look to use more often as despite his reluctance to take on players he has still managed a 66.7% completion on his dribbles for Anderlecht. His pace and ability on the ball are attributes we often see in attacking full-backs, but regardless of this, he seems reluctant to play as this kind of defender. 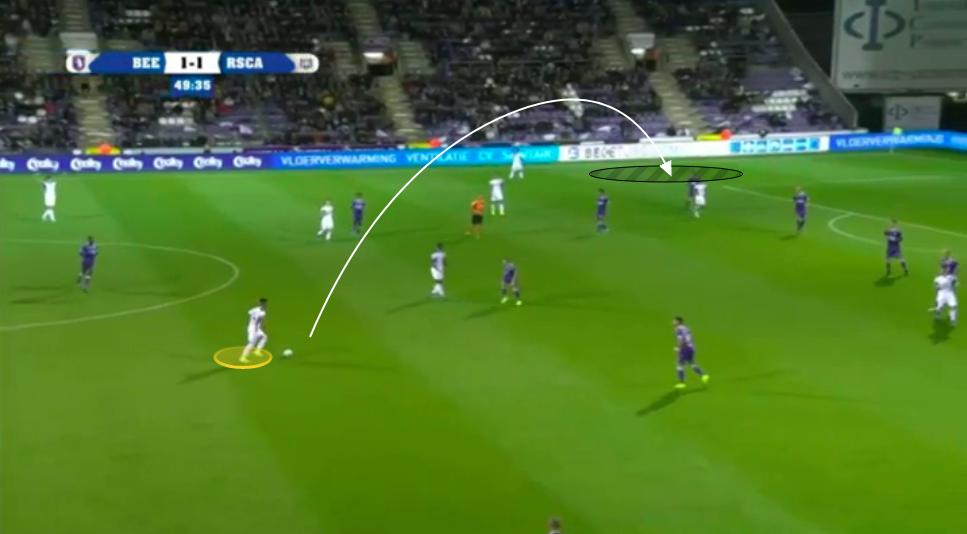 We are able to see in the analysis of his passing below against Beerschot this season just how frequently he uses this diagonal ball to switch the play and release the left-winger. The pass map also highlights how accurate his with this pass. In total 25 of his 51 long passes, this season have been a diagonal ball to the left-wing, with a 76% completion rate from this type of pass.

However, this is not to say this is his only preference for passes into the final third. Sardella is excellent at receiving the ball in a deep right-back position and quickly playing a lofted pass onto Doku over the top of the opposition left-back, at pace and with precision. 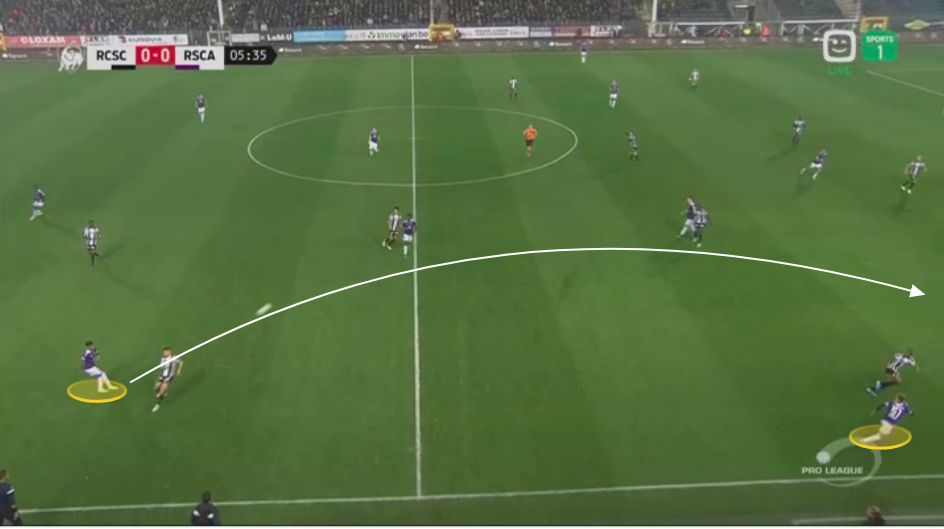 A lot of his game is based around the incredible attacking talent of his 17-year old teammate Doku. His reluctance to push forward is partly down to Anderlecht’s desire to isolate Doku against the left-back. The winger is excellent when he has plenty of space to operate in 1v1 situations. It is no coincidence Doku attempts more 1v1s than anyone else in the league with 14.92. By Sardella staying deeper it allows Doku space to receive the ball, as well as ensuring there is space behind the left-back to attack. On top of this, it stops defenders and wingers from being able to double up on him.

Sardella has a significant amount of pace that he is able to use to his advantage when defending. He reads the game well for a player so young and is aware of imminent dangers around. He does, however, have a habit for getting pulled into areas too far away from the rest of his back-four. Below we can see that, although he hasn’t been pulled into the area of the ball-carrier, he is waiting for the pass to the opposition left-winger to press. He nevertheless has left significant space between himself and his centre-back, which could be exploited with a simple pass. 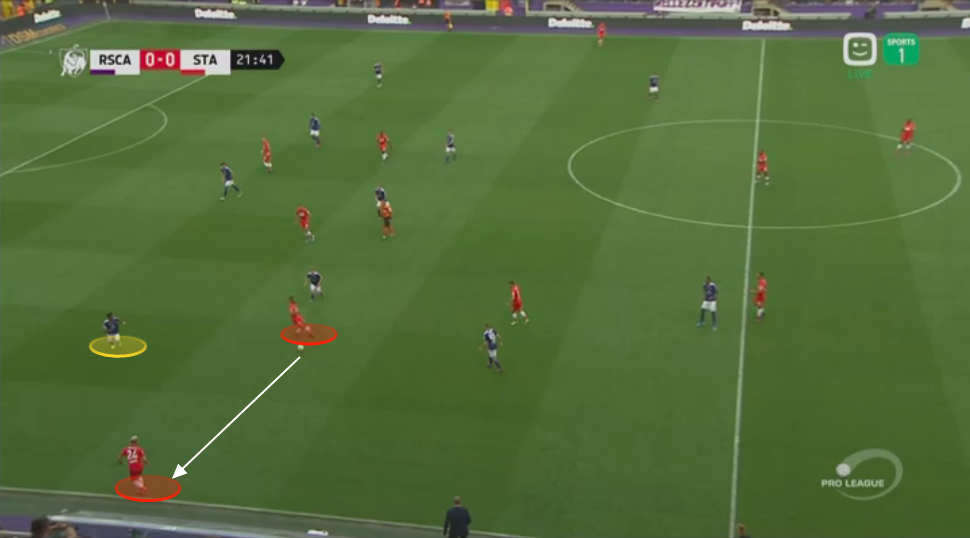 His speed is his get out of jail card, however, and perhaps is a cause of his tendency to move too far from the rest of his back four, knowing he has the pace to get back into position quickly. His pace means he is incredibly effective at pressing, pushing opposition attackers backwards due to the pace of his press. He constantly looks to win the ball back in these areas and is able to force attacking players to recycle the ball, rather than attempt to take him on. 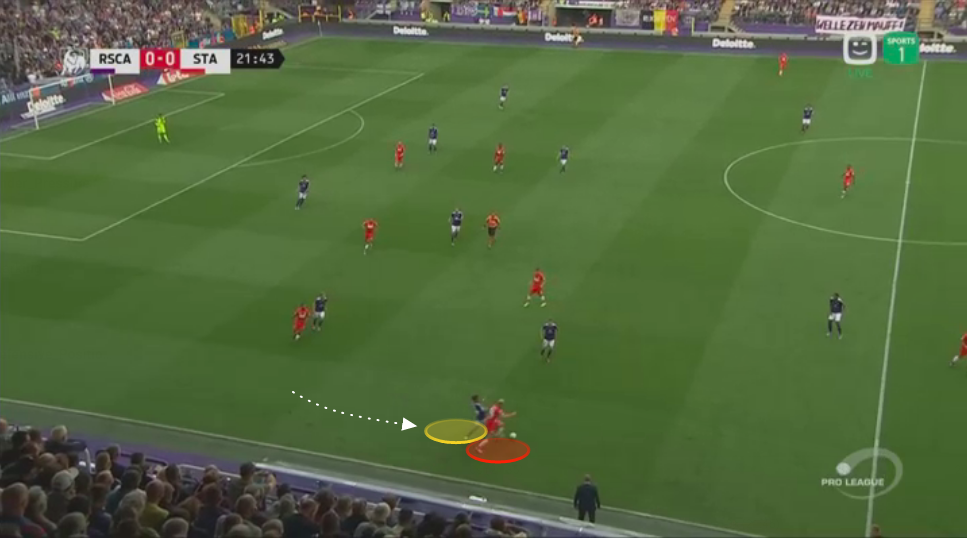 Sardella is a combative player. This season he has had 11.01 defensive duels per game. This is the fifth-highest amount of defensive duels in the entire league. On top of this, he has won a very respectable 56% of these duels. These statistics are staggering for a 17-year old in their first season of professional football.

He isn’t as strong aerially, however. So far this season he has won just 30% of his headers. His success rate would no doubt improve if he could fix his recurring habit of turning his back on the ball mid-air.

As previously mentioned, due to his speed Sardella is perhaps less disciplined with his positioning than a slower full-back might be. His desire to win the ball back does lead to a tendency to drift out of position, and as we can see in the image below, can free up space on his own flank for the opposition to exploit. 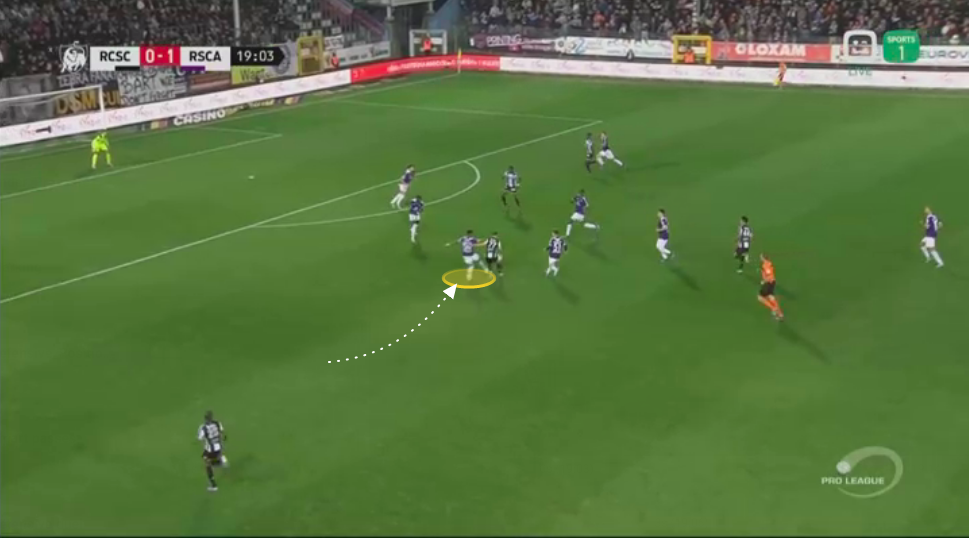 It is Sardella’s youthful desire to win his battles that is to the detriment of his defence. He very frequently dives in to attempt to retrieve the ball, often in areas where there is no need to dive in as the opposition is not in an immediately threatening position.

Below we see an example of this, where he has attempted to reach his long legs around the winger in order to win the ball-back, but instead gives a foul away. He does dive in regularly and to his credit has been relatively successful with this approach so far, winning a lot of tackles this way this season. However, teams will become wise to this and clever wingers will use this to win fouls in more dangerous areas. 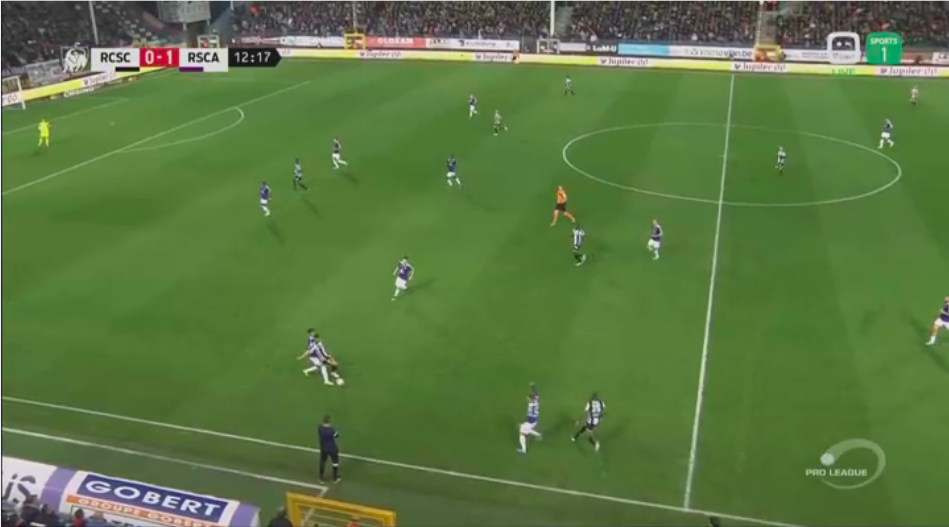 It will be interesting to monitor Sardella’s progress over the coming years. In a period of football where full-backs are seemingly attacking players who can defend, Sardella is far from fitting this mould. He is a sturdy defensive talent, and on top of this has excellent passing ability. If he can improve his aerial ability he may well find himself pushed inside into a centre-back role, although due to standing at 178cm, there has been concern he is too small for this role. It’s not out of the question to suggest that he may still grow.

However, it is clear he needs to improve as an attacking full-back. Despite his prowess as an accurate long passer, this hasn’t transferred to his crossing, and he needs to add this to his game to take himself to the next level. He has the potential to be excellent in attacking 1v1 situations but as mentioned seldom uses this skill.

It is perhaps the emphasis on the development of Doku that is restricting his own development as an attacking player, with the tactics used by Anderlecht seeking to isolate Doku.

Yet Anderlecht have proven over the years that it is an excellent club for a young player to develop at, and we may well see Sardella in one of the top five leagues in the not too distant future.