With Achim Beierlorzer getting the axe, a difficult away trip to RB Leipzig awaited new Köln manager Markus Gisdol. Whilst the away team were hoping for an unlikely away win to kickstart their season, Leipzig knew they needed a win to keep the pressure on Borussia Mönchengladbach at the top of the table.

If Köln fans were hoping to see an immediate turn of fortunes they were to be disappointed as Leipzig ran out as 4-1 winners in a very one-sided affair.

This tactical analysis highlights the approach both managers took in Saturday’s Bundesliga fixture.

Leipzig Head Coach Julian Nagelsmann brought in a few changes from his side’s 4-2 win against Hertha Berlin before the international break. Nordi Mukiele, and Yussuf Poulsen missed out due to injuries so a reshuffle of personnel and formation saw Leipzig field a 4-4-1-1, with Lukas Klostermann switching from left-back to right-back, and Marcel Halstenberg coming in at left-back. Christopher Nkunku played behind Timo Werner in attack.

Gisdol fielded a 4-1-4-1, mirroring Leipzig’s albeit with a defensive midfielder instead of a number 10. Birger Verstraete and Marco Höger had seen opportunities limited under Beierlorzer and were brought in immediately by Gisdol to play in the centre of midfield. Anthony Modeste has struggled for goalscoring form this year but was preferred up front to Simon Terodde. 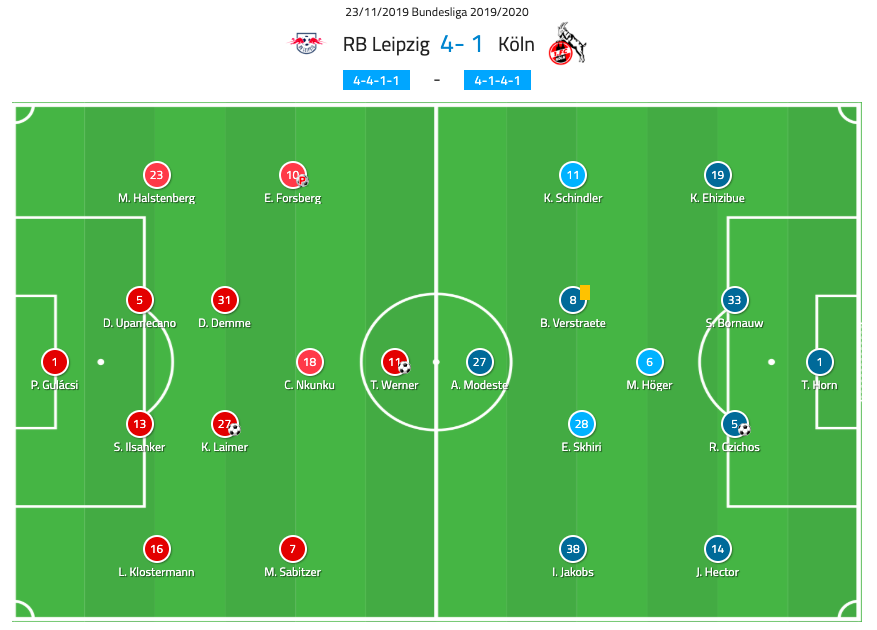 From the analysis of Köln’s passing below, we are able to see that their two centre-backs, Sebastiaan Bornauw and Rafael Czichos were under strict instructions to play forward quickly rather than patiently build play at the back. The lack of any line between the two of them demonstrates this.

Throughout the majority of the game, Köln’s tactics involved getting the ball in behind to one of Modeste, Kingsley Schindler or Ismail Jacobs. However, this was a relatively one-dimensional approach and Leipzig’s defence were well and truly prepared to deal with any long balls.

Nevertheless, Köln pursued this approach for much of the game, but particularly in the first half. With Timo Horn in possession, he would play short to either Bornauw or Czichos. In the image below it is Czichos that receives the ball.

Köln’s shape is very high despite their two centre-backs receiving deep. Höger sits just ahead of them in the centre of the pitch, yet far further up the pitch they have their two centre-midfielders flanked by their wing-backs in a flat four with plenty of width, whilst Schindler, Modeste and Jacobs sit close to them, occupying Leipzig’s back four.

In this case, the centre-back would usually carry the ball forward, which was the trigger for the Köln centre-midfielder playing on that side to drop in and give an option.

Ellyes Skhiri drops deep in the image below, with the intention to bring Leipzig’s midfield forward and allow space for Köln’s front three to isolate themselves against the Leipzig defence.

The ball from the centre-back varied depending on Modeste’s run, who either came short looking to link up with one of Schindler or Jacobs should he retain possession, or simply run behind looking for the ball over the top in the spaces between centre-back and full-back.

Köln’s decision to have their centre-backs drop so deep meant Leipzig’s shape was relatively high and therefore there was space in behind their defence to hit the ball into.

The reliance on the long ball was a recurring criticism whilst Beierlorzer was at the helm, and Köln continued this approach. This was, however, until they clawed one back to make it 3-1 in the 39th minute, thanks to a Czichos header from a corner. They seemingly grew in confidence after the goal and looked to play a little more. Their share of possession in the second half was seven per cent higher than in the first, and the graph below shows how their incredibly high long pass share percentage dipped in the second half, even if at 11% it was almost triple Leipzig’s own percentage.

Even when playing the ball into the wide areas Modeste stayed central choosing not to shift wide and create a numerical overload on the flank. In doing so this created pockets of space for their two central-midfielders Skhiri and Verstraete to penetrate and receive behind the Leipzig full-backs.

Köln looked to employ this tactic from the beginning with the image below showing Verstraete running from a central area, unmarked. With Halstenberg pressing the ball Köln aimed to bring Upamecano out of position in order to prevent Verstraete from being able to cross the ball.

However, due to Leipzig’s dominance, there was limited opportunity for them to get behind Leipzig and they registered just two crosses in the first half.

In the second half, they changed approach and instead looked to cross from deeper, as the graphs below demonstrate.

With Modeste so strong aerially they sought to pick him out by crossing in between Leipzig’s centre-backs and full-backs as Modeste made runs in between them seeking to be picked out in the air. Köln looked to play this cross quickly before Leipzig could set themselves defensively, at times crossing without looking up, knowing Modeste was expecting the ball.

Yet this was unsuccessful, and Köln managed just one shot on target the entire game, from six efforts.

As mentioned earlier Leipzig dominated the game, and they enjoyed 68% of possession. Their approach to building up play differed greatly from their opponents though, and we can see this from the image below. Despite having only 13 more possessions than Köln, they had the ball for over double the amount of time that the visitors did.

Despite lining up in a 4-4-1-1 formation, when in possession, they played in a 3-4-3 with Klostermann staying deep and forming a back three with Ilsanker and Upamecano. Halstenberg pushed high, moving out of the left-back position and taking up a left-wing position, playing equally as high in attack as Marcel Sabitzer. Nkunku pushed forward from his deeper role and Emile Forsberg came inside too, with Halstenberg occupying his left-flank., but more on this front three later.

Leipzig engaged in patient buildup play, frequently circling the ball waiting for the opportunity to find a hole in Köln’s shape. They moved the ball looking to spread Köln’s back four wide and playing one of their front three in between their defence which I will discuss in more detail later.

When playing out from the back Diego Demme would drop in, to receive the ball. He did this in order to encourage the away side to press and move forward.

If he did receive the ball he would continue to circle the ball, but if not he would vacate the space, allow the Leipzig back three to continue circling the ball and would then make his run once more.

As Demme made his run deep we are able to see Köln move forward and space is created in the half-space for Leipzig to play into. Ilsanker passes into Upamecano who in turn seeks to pass into Halstenberg who is now able to receive and in doing so take out four of Köln’s players. 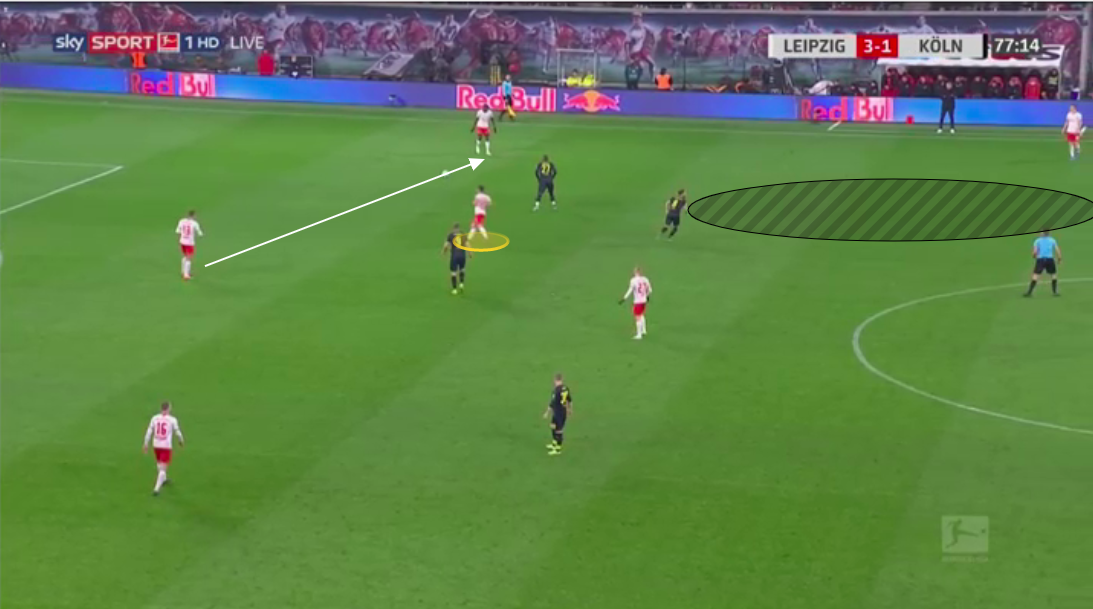 Upamecano was vital to Leipzig’s buildup play and played more passes than anyone else with 112, with an outstanding 94% completion. Out of every other Leipzig starter only Ilsanker had a higher percentage with 95%, but he attempted 45 passes less than Upamecano.

The significance of the width provided by Halstenberg and Sabitzer

As mentioned earlier, in attack, Leipzig played a 3-4-3 with Halstenberg and Sabitzer on each flank.

This width ensured Leipzig’s counter-press was organized should they lose the ball. Leipzig’s press was based around organisation rather than just intensity and was effective with a 7.9 PPDA. Along with Laimer their front five combined for a total of 26 ball recoveries in the opposition half with Halstenberg managing seven of these.

But it was predominantly used to provide width to allow Nkunku, Forsberg, and Werner to play in a fluid front-three where they could operate close to one another and freely rotate in positioning.

The tightness of the front three meant they were able to occupy the Köln back four and allow plenty of space out wide for both Halstenberg and Sabitzer. However, they were also able to play the two wide players in behind through spaces between centre-back and full-backs. 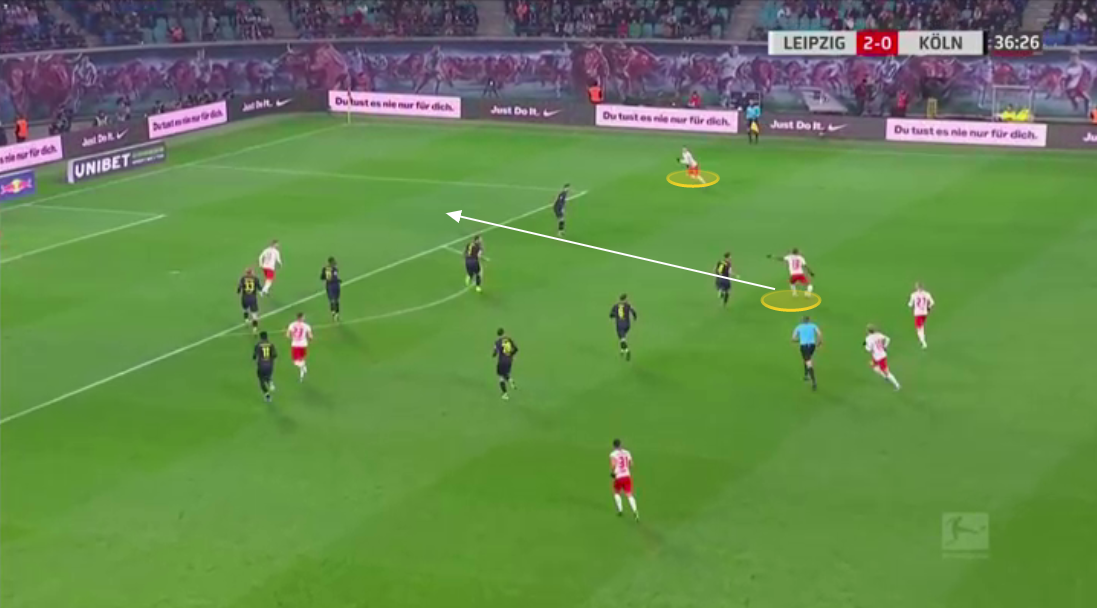 The width of Halstenberg and Sabitzer also allowed both the front three to manipulate the half-spaces to get behind the Köln defence as well.

Throughout the game, Nkunku often played the highest of the three, whereas both Forsberg and Werner played in the half-spaces.

When the diagonal ball was played from the back to the flanks, it was the cue for either Forsberg or Werner to time a curved run into the half-space before exploding into the space between the centre-back and full-back, who had just pressed the wide player. We can see an example of this below as Halstenberg receives the ball, he is pressed by Kingsley Ehizibue. Forsberg curves his run into the half-space before penetrating the space between Ehizibue and Bornauw, looking to receive from Halstenberg. 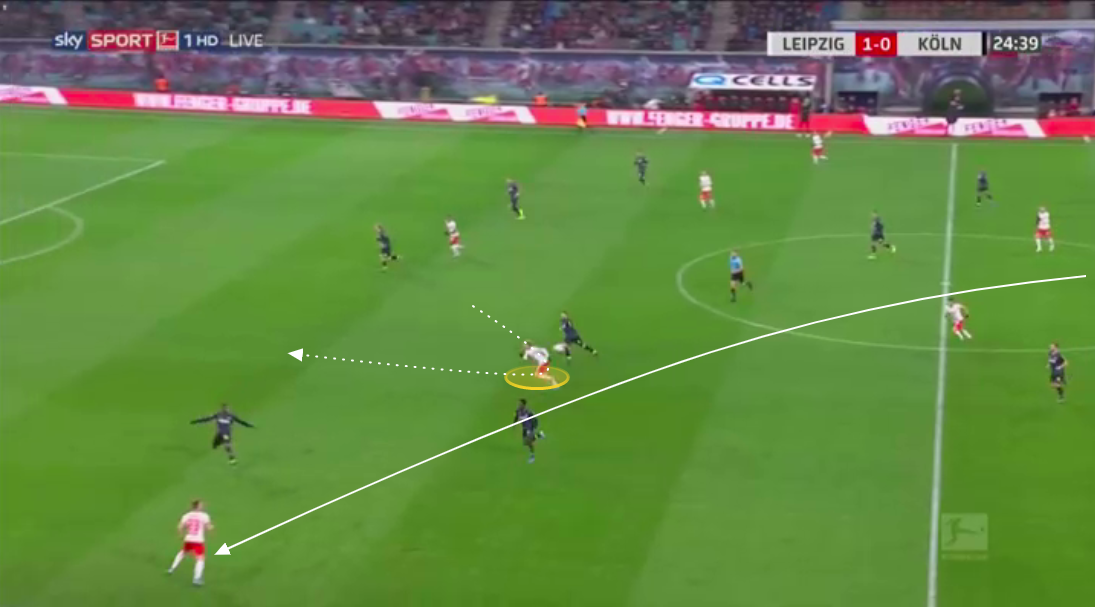 Throughout the game, Werner and Forsberg were often able to receive in the half-spaces and in between the Köln defence and midfield as well.

With Borussia Mönchengladbach losing to Union Berlin, this win moves Leipzig just one point behind the Bundesliga leaders, and they now sit in second place.

It was an incredibly convincing performance from Nagelsmann’s side, and only goes to prove that Gisdol has a lot of work to do to keep last season’s Bundesliga. 2 winners from being relegated in just their first season back in the top flight.

Nevertheless, this was always going to be a difficult first game for Gisdol. Therefore it is perhaps a bit unfair to predict how his side will play and how they will fair for the rest of the season from this showing. However, Köln fans will be hoping they can get their season back on track over the next two weeks with vital fixtures against Augsburg and Union Berlin.