The weekend opener between Köln and Dortmund proved to be more interesting than expected. The home team managed to go toe-to-toe against title contenders Dortmund for at least 85 minutes. In the end, Dortmund was able to turn the game around and secured three vital points with a 3-1 away victory.

Our tactical analysis will examine the different tactics of both teams and show how Dortmund was able to take home the win.

Both teams played in a rather conservative formation without being too adventurous. Köln coach Achim Beierlorzer used a standard 4-4-2 system with two classic strikers, Jhon Córdoba, and Anthony Modeste. Dortmund coach Lucien Favre, on the other hand, has the luxury of selecting between 15 or 16 high-class players. He opted for a 4-2-3-1 system and looked once again for stability fielding Julian Weigl alongside Axel Witsel in the defensive midfield.

On paper, the front three of Jadon Sancho, Marco Reus, and Thorgan Hazard behind sole striker Paco Alcácer seemed to promise a lot of firework potential.

The 4-4-2 formation of Köln proved to be quite solid. The team in white was able to tighten the space and make it difficult for Dortmund to combine. 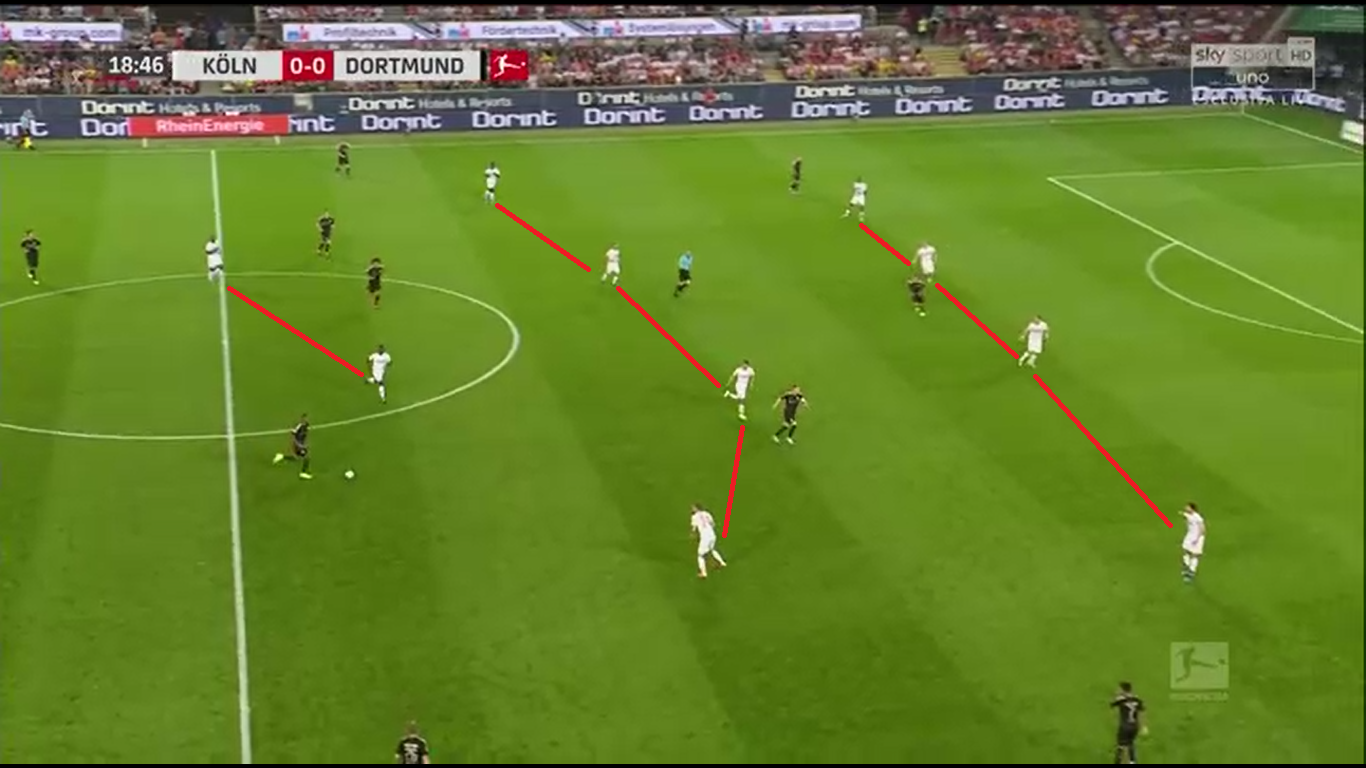 In this example, we see Köln defending with every player in their half. The two tight four man-lines in the centre are not perfect, but it is enough to stay solid. The gap between the two central midfielders is a bit too big. As a result, the passing lane to Paco Alcácer into the space between the two lines is open, but Dortmund was not able to play that pass. Apart from that, Köln does not offer weaknesses. Dortmund’s two defensive midfielders are out of play in this situation, which is exactly what Köln wanted to do. 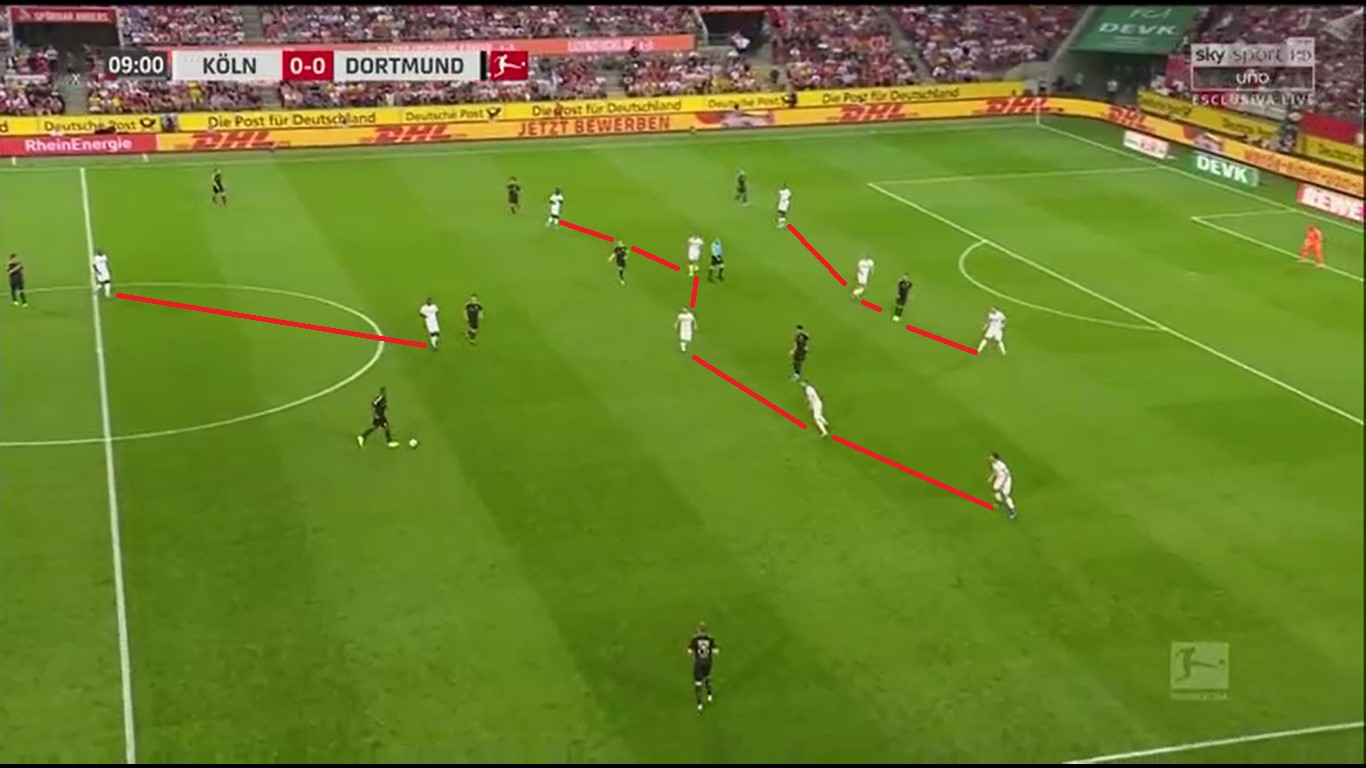 Occasionally, left-back Jonas Hector would push forward, so that the formation would transform into a 3-5-2. Situations like in the image above arose then, with Köln tightening the centre even more. In the 3-5-2, the left-winger Dominick Drexler would become a left central midfielder. He could then shift much more into the centre and defend Sancho’s movement into the half-spaces. Left-back Hector was then able to put pressure on Dortmund right-back Lukasz Piszczek if needed. 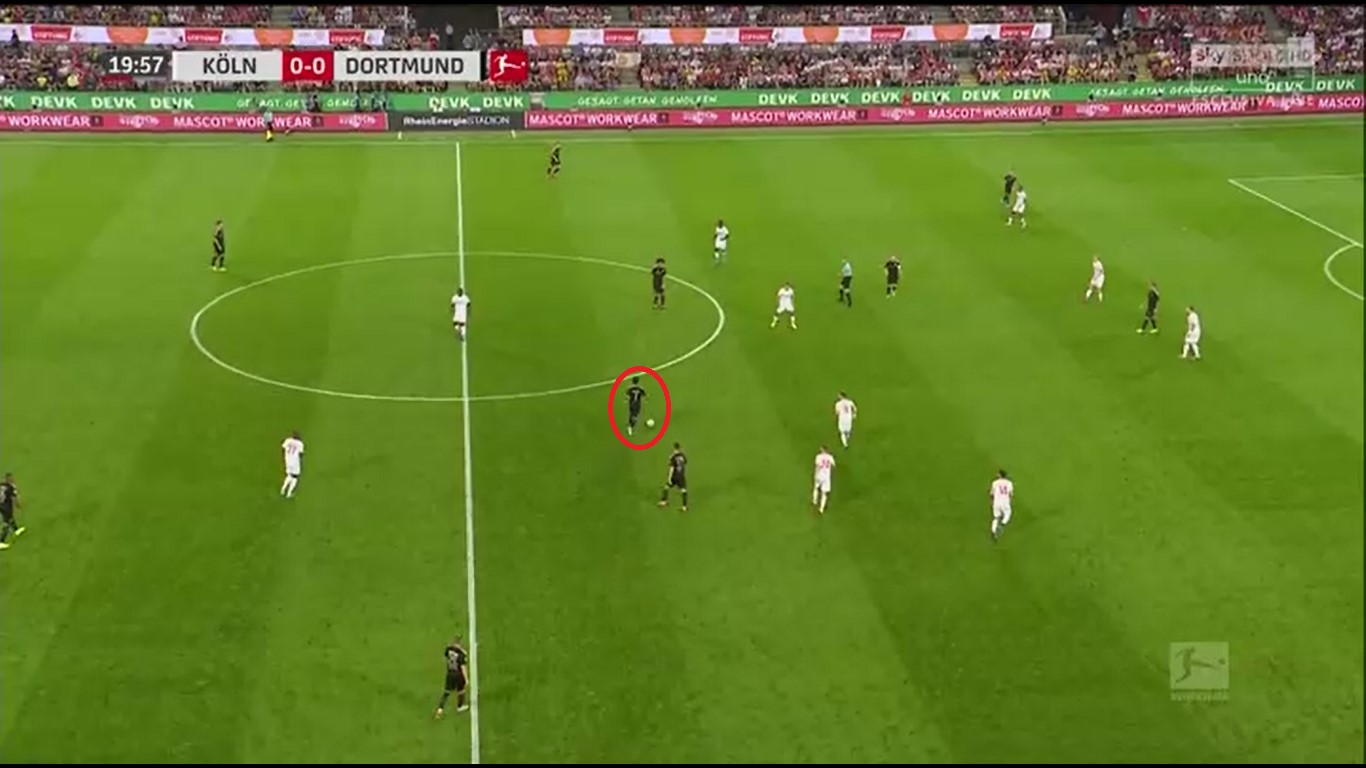 Sometimes, when Sancho dribbled into the centre, some strange positioning occurred because of different dynamics within the situation. From Köln’s perspective, they are in a hybrid formation where it is not entirely clear whether it is a 4-4-2 or a 3-5-2. It depends on what Hector decides to do. Looking at Dortmund, the players are extremely static, as no one seems to react to Sancho’s dribbling, and opt to stay in their starting position coming from the 4-2-3-1. 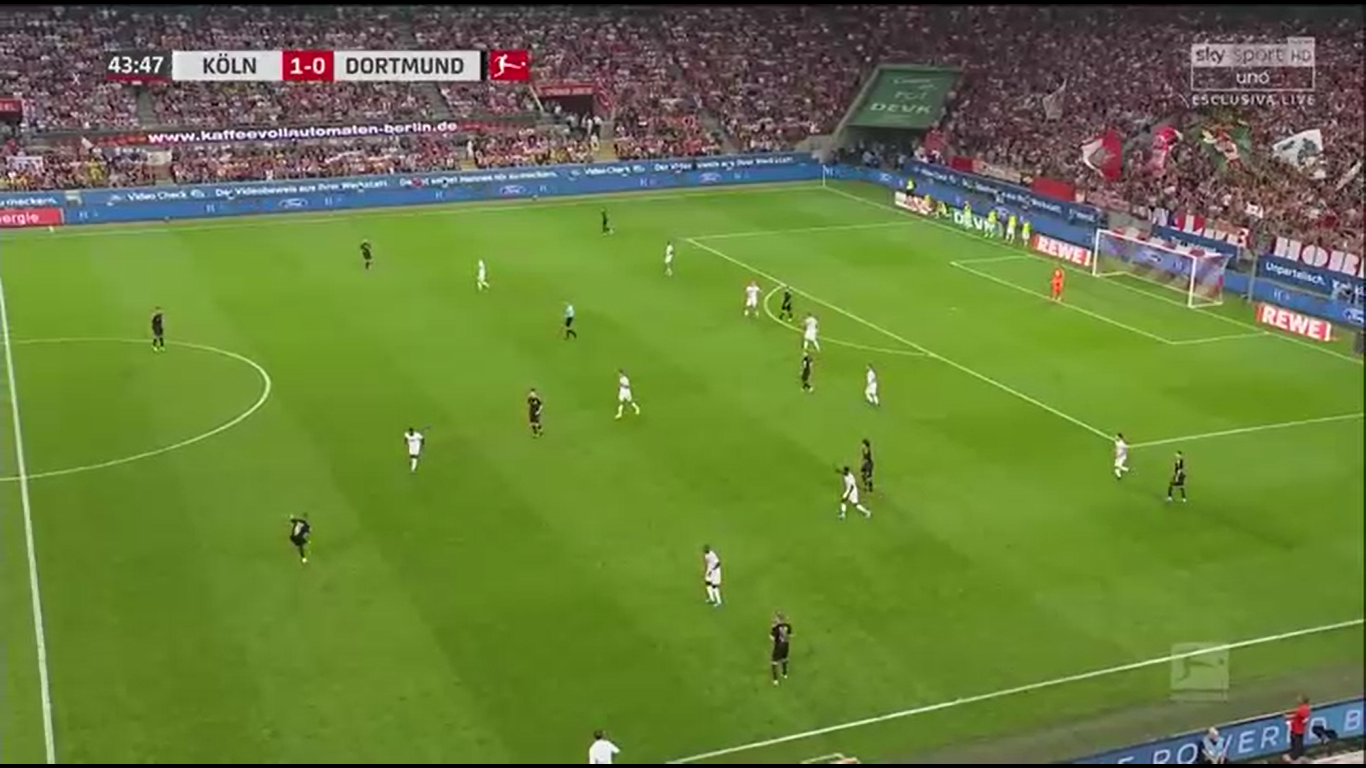 Also, from this image, we can see Köln’s ability to be flexible when defending deep, as they react to Marco Reus’ positioning as the second striker again with a sudden switch to a back five. The remaining midfield three then has to cover a lot of width. Dortmund was not able to exploit this though, because they played too slowly and could not change the direction of the play quick enough.

In the build-up phase, Dortmund struggled a lot because of Köln’s cohesive high press. A clear man-marking approach with a lot of intensity was the key for them. 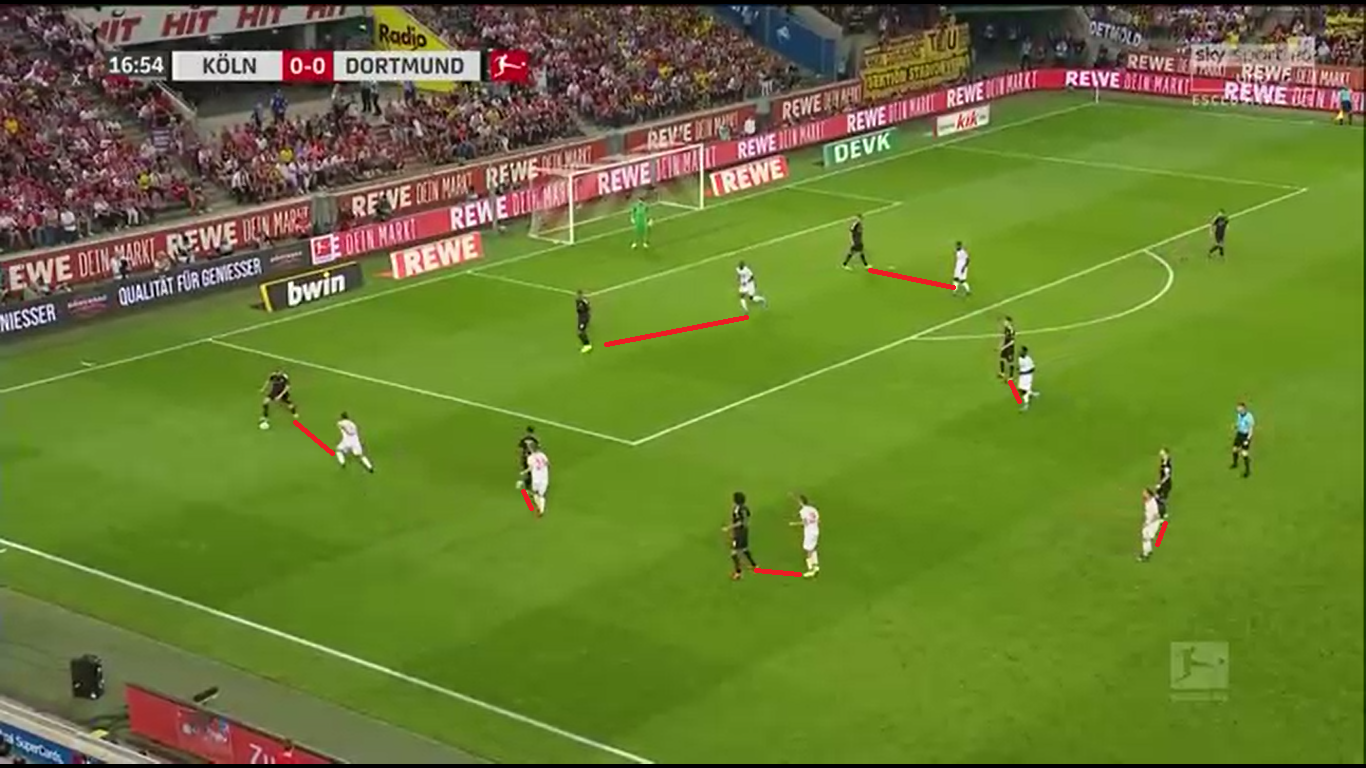 Here is a great example of it. The fact that seven players press high up in Dortmund’s half shows their courage. Also, what stands out in this image is how close they mark their opponents. Apart from the two pairs in the box, the distance between a Dortmund player and the nearest Köln defenders is less than a meter. It is practically impossible to play the ball out shortly. 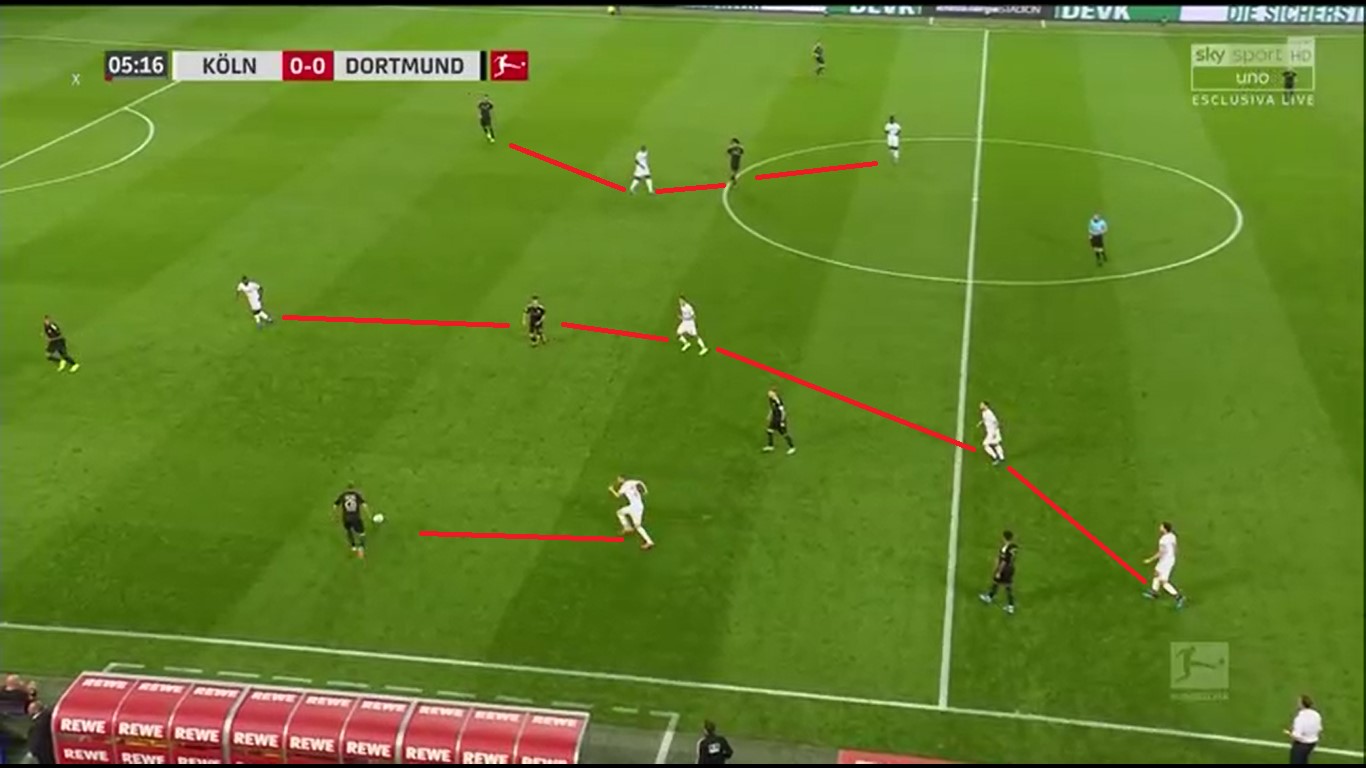 What also stands out is how intelligent Köln’s press was. The image above shows how they were able to push Dortmund to the wings and then used the touchline to limit the opponent. From Dortmund’s point of view, the only way out is to play it back to the goalkeeper. Apart from that, there is no other passing option nearby. There is once again some kind of a man-marking approach, but also a positional idea to cut passing lanes from the wing to the centre.

When Köln won the ball on the wing, their main idea was to play a long ball behind the backline. They were looking for Modeste and Córdoba a lot. 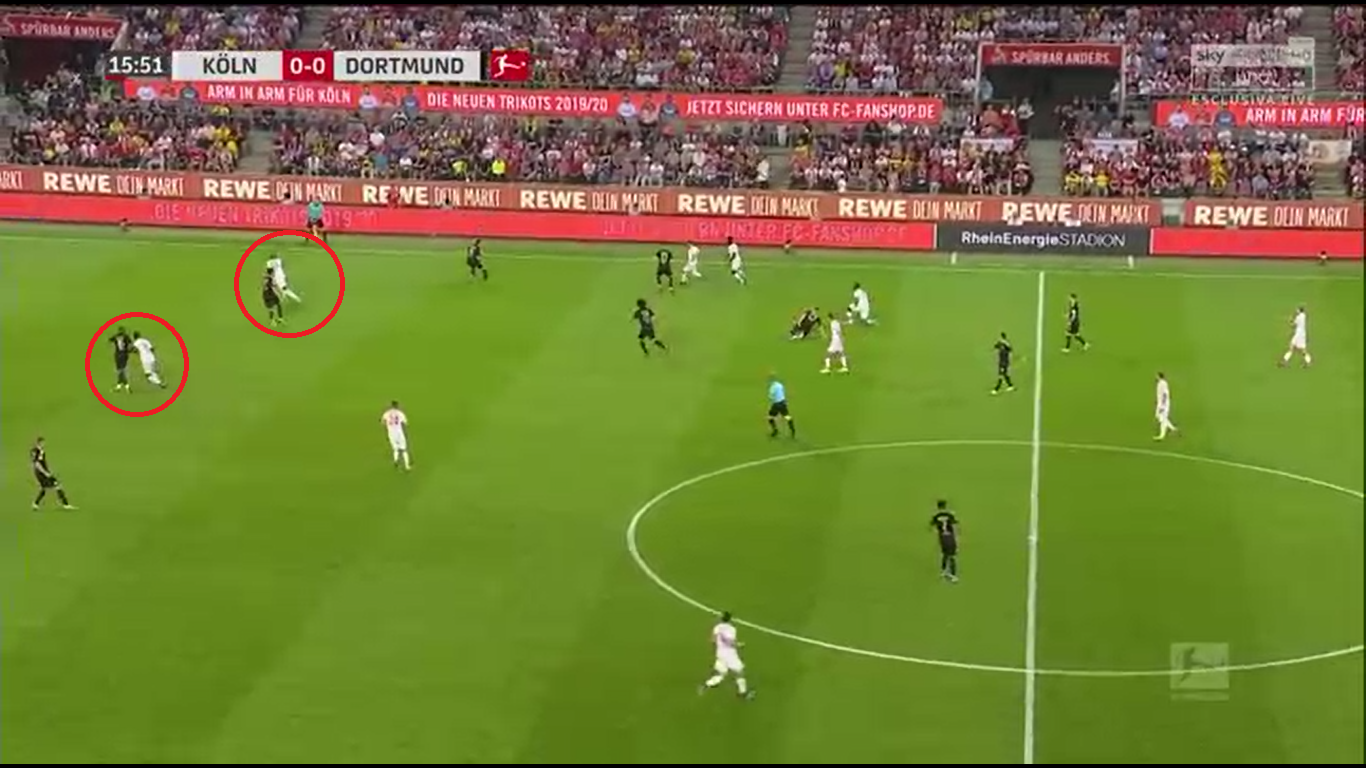 Both strikers were prepared to immediately start those runs and posed a lot of problems for the defenders. For Dortmund, it was vital to prevent these passes by pressuring the player in possession as much as possible.

Since Köln’s press was so dangerous for Dortmund, it was important to find solutions to overcome the press. One approach was that Witsel fell back in the build-up. 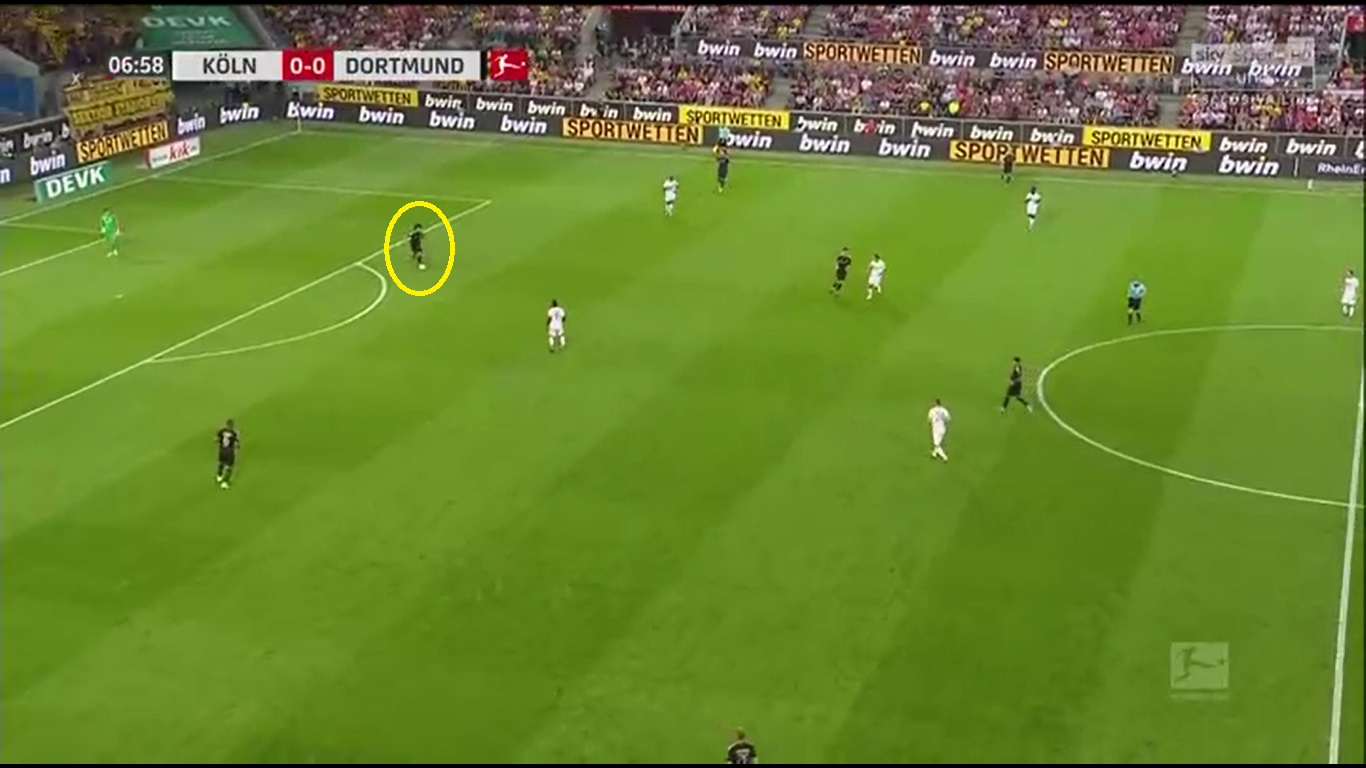 As Köln pressed with their two strikers, Witsel provided numerical superiority by falling back between the centre-backs. Köln did not react by man-marking him, so Witsel had a lot of space and could facilitate the attack from there. 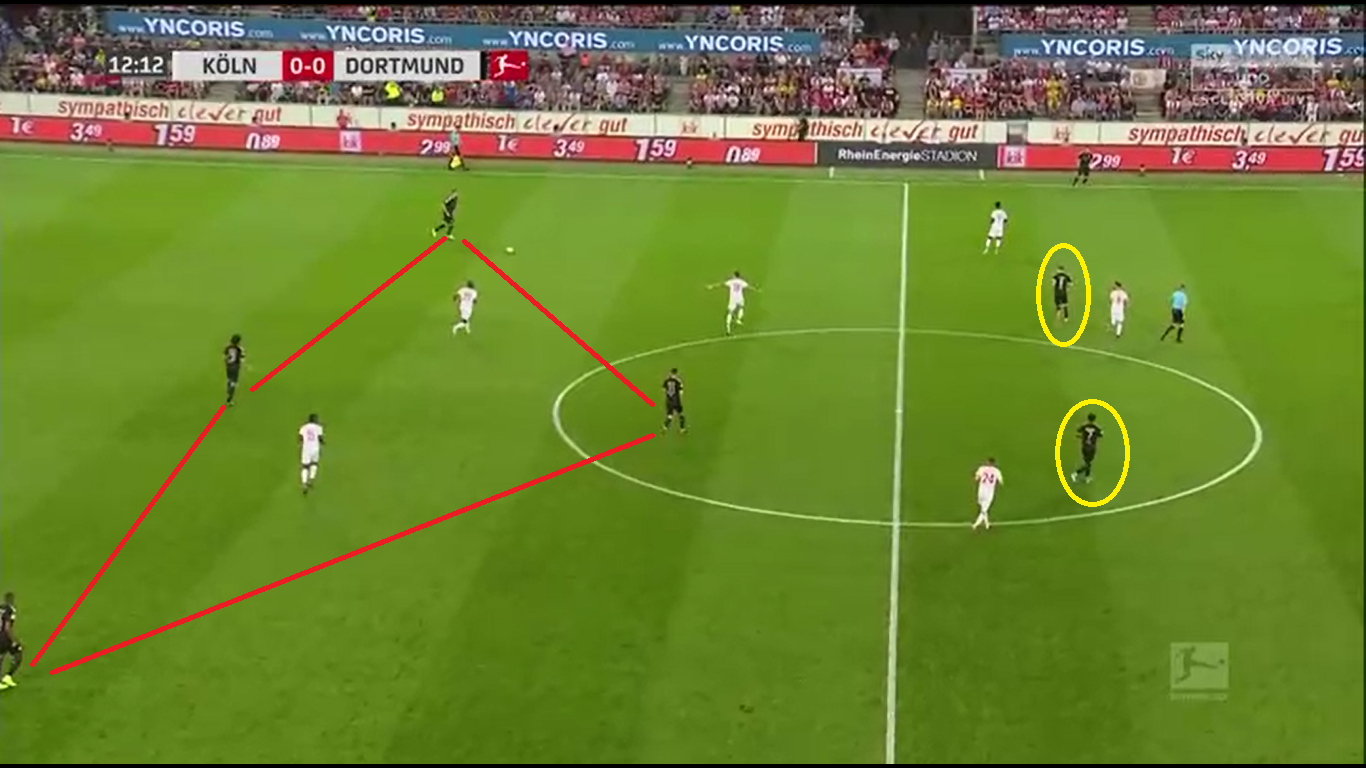 The resulting structure was some kind of a diamond with Weigl on top. The fullbacks pushed higher, while Sancho and Reus occupied the half-spaces. This structure fulfilled the purpose to limit possession losses for Dortmund but compromised them as they were not able to progress the ball into more dangerous areas.

Favre reacted early in the second half. Weigl was replaced by Julian Brandt, who then played alongside Witsel in an unusual position for him. However, he was able to provide the missing component of playing quick passes and shaping the attack. 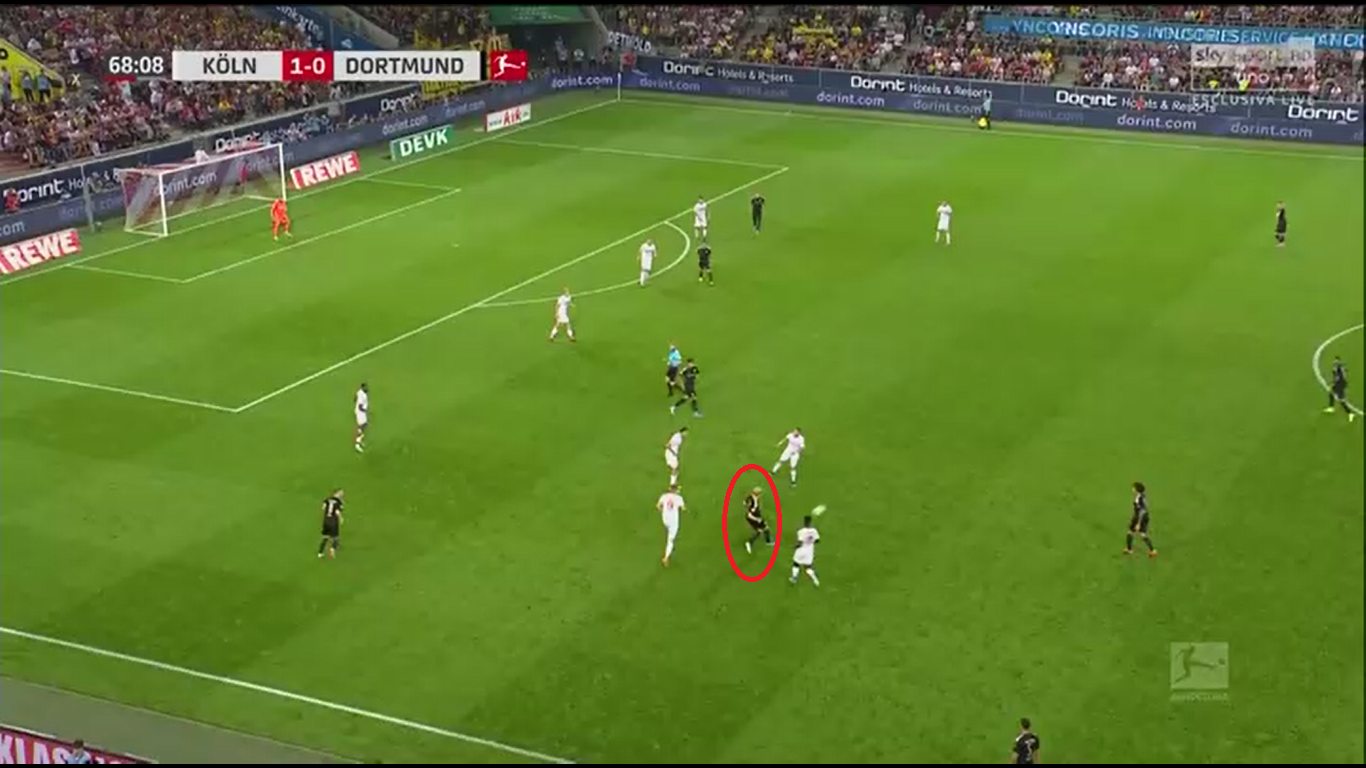 As an example, we see this position where he is under pressure against four defenders but manages to play the ball into the open space in the centre. His ability to attract opponents and then find the open space proved to be important for Dortmund. Also, the speed within the passing chain increased visibly after Brandt joined the game. 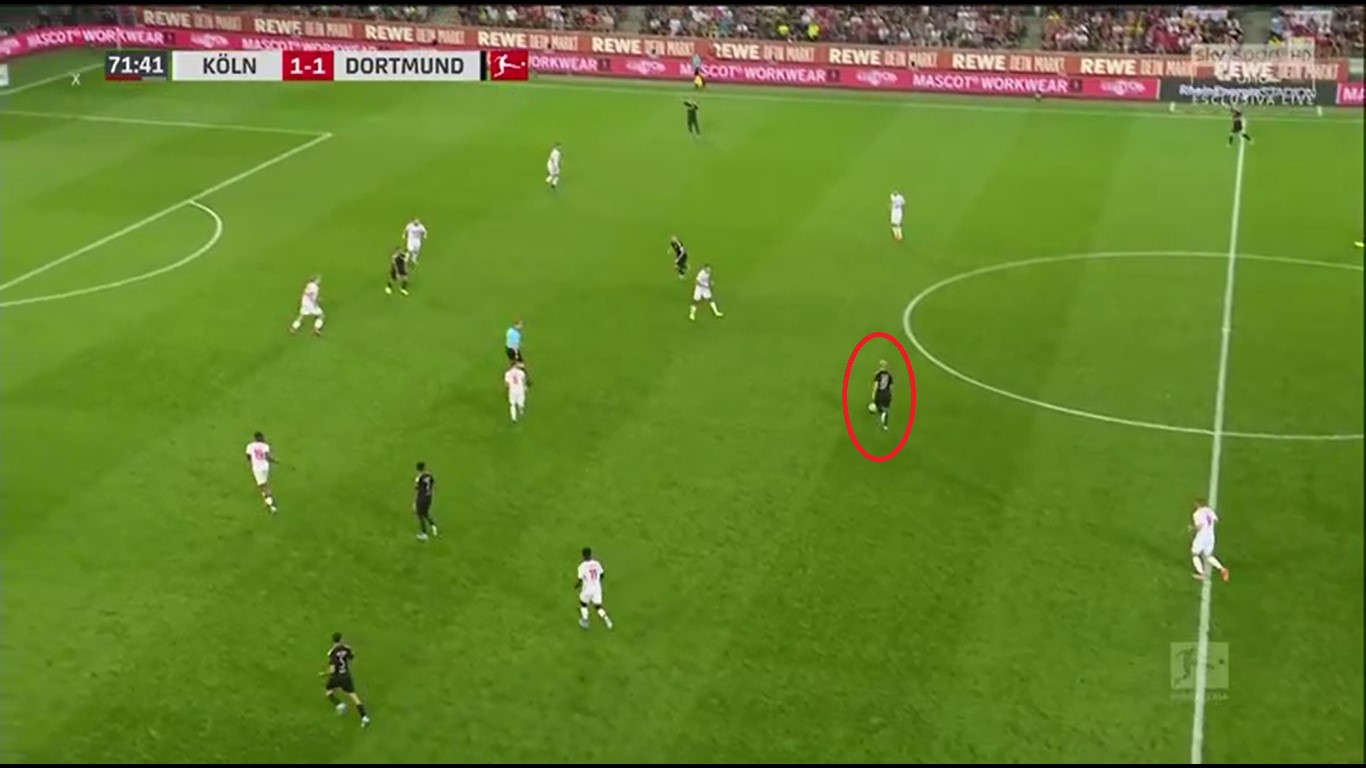 From the central midfielder position, Brandt was able to show his strategical skills and shape the attack. As can be seen in the image above, Köln was not able to limit his movement and pressure him, so Brandt had a lot of time and space to make use of his playmaking abilities. 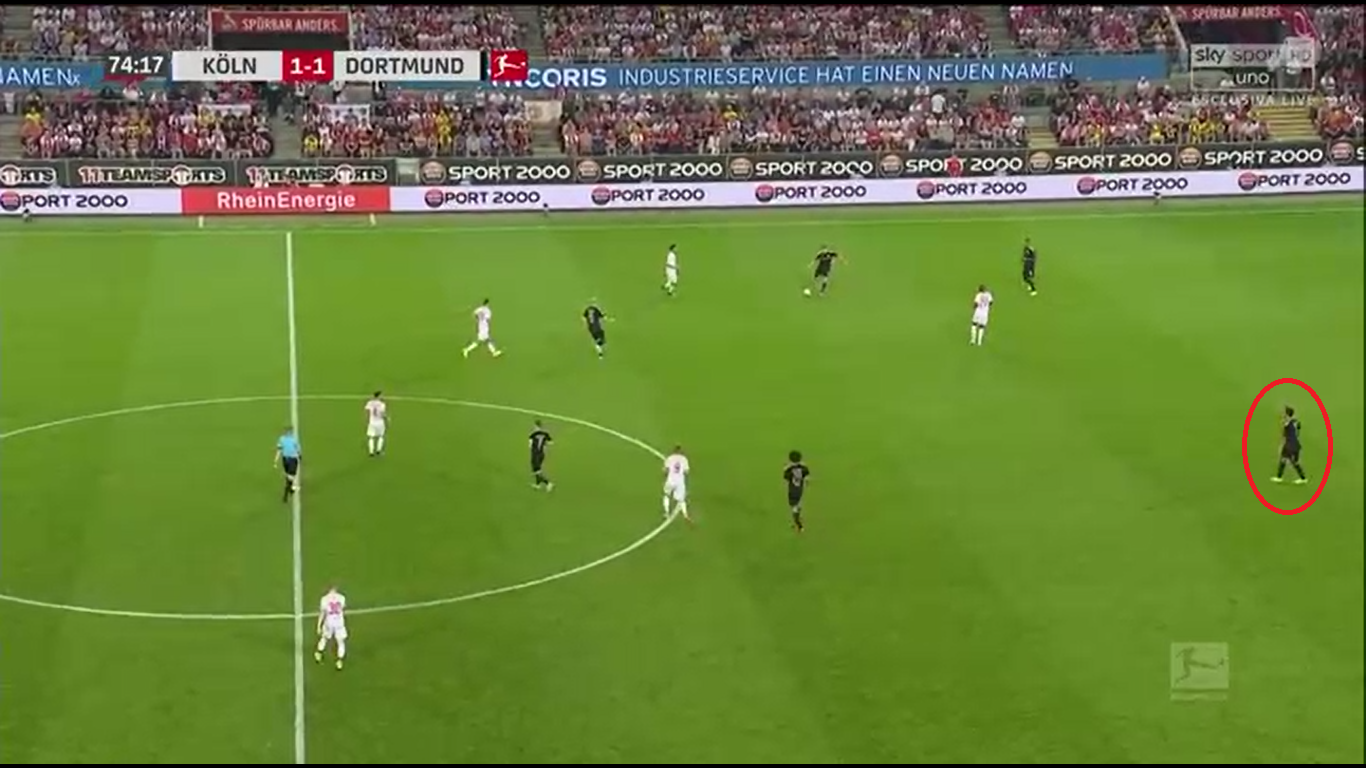 The longer the game went, the more Köln’s pressing intensity dropped, which also helped Dortmund. In the image above, we see an example of Dortmund being pushed to the wing once again early in the build-up. But this time, Köln was not able to execute the press as precisely as in the first half due to a lack of energy. Therefore, Mats Hummels is wide open and Dortmund can beat the press rather easily.

Looking at the decisive 2-1 which was scored late in the game, these two factors came into play. Köln was not able to put enough pressure on Dortmund, and Brandt was able to distribute the ball to the wing, which resulted in a cross and a finishing header.

Our analysis showed that Köln did many things great. Overall, they played a good game. However, in the end, they came a little short because they were not able to keep up that high energy level for 90 minutes. As good as their press was, there was no chance to maintain it the whole game. Dortmund, on the other hand, struggled with their possession game and did not find any solution against the tight and compact defence of Köln. Their biggest asset this season is their depth. Being able to bring in players like Brandt and Achraf Hakimi against a tired opponent could win them many more points this season and could prove vital in the title fight.