Wolfsburg travelled to Hertha Berlin last Sunday seeking to gain their second Bundesliga win in as many matches. They achieved this with a professional 3-0 away win at the Olympiastadion, in large parts thanks to a very early goal from Wout Weghorst. In this tactical analysis, I will use analysis to show how Wolfsburg managed to stay compact and hold off Hertha and point out some structural issues in Hertha, both offensively and defensively.

Glasner lined Wolfsburg up in his favoured formation, with the exact same lineup as matchday one. This three/five at the back played a key role in the game for Wolfsburg, as I will move onto later. Hertha meanwhile employed a 4-3-3 and struggled to break down a compact, difficult Wolfsburg side. 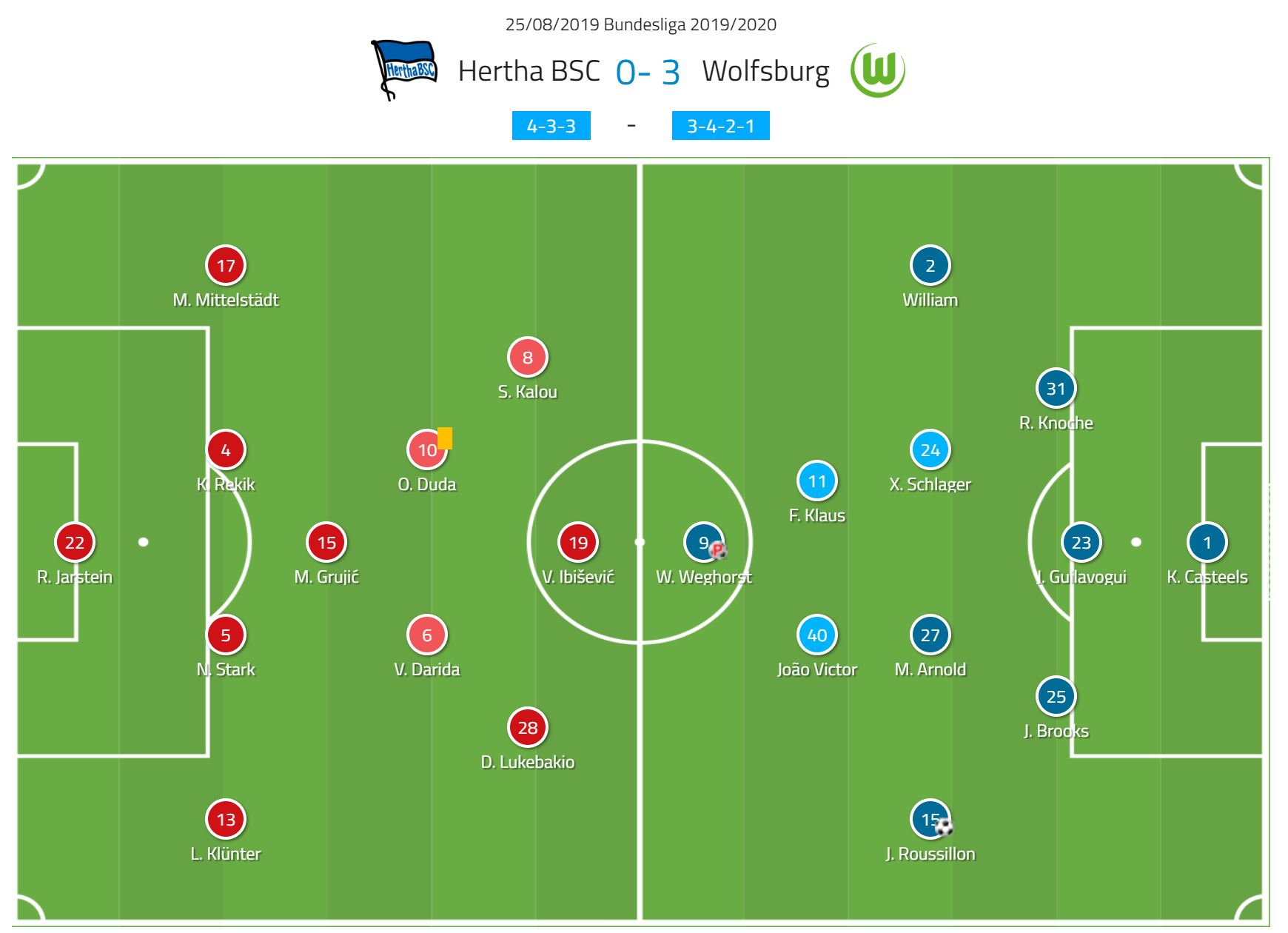 Upon taking the lead early on, Wolfsburg adapted their shape and sat much deeper, challenging Hertha to attempt to break down their mid/low block. We can see their 5-4-1 formation below, which looked to limit space between the lines and limit Hertha’s build-up. If the ball was recycled wide, the winger could move out to press while still being backed up by the full-back, and due to the large numbers of Wolfsburg committed behind the ball, they were able to shuffle across without leaving much space.

We can see their numerical superiority below, where a long ball over to Hertha’s high full-back is dealt with easily by Wolfsburg. William the right full-back moves out to challenge the wing-back, which leaves a space behind him. The nearest centre back can then cover this space if the ball gets past William, and the rest of the defence can push over.  The presence of an extra centre back means defenders within the last line have to cover less distance, and therefore the spaces for Hertha to work in were smaller. Therefore, Hertha needed to find a way through this backline.

Within a back five, because of the presence of an extra defender, the centre back is able to be more aggressive and follow players out of position, as if they leave the backline the team will still have a solid back four. John Brooks was the most aggressive defender out of possession for Wolfsburg, and we can see a few examples of this below.

In possession it was Robin Knoche who was the more adventurous, making runs from centre back to help the full-back and competing dribbles out of his own half to try and progress play. We can see in the example below one such overlapping run from Knoche, which he is capable of doing thanks to sufficient cover in the centre of the pitch.

A solution for Hertha?

We can see the structural problem below when one of Hertha’s central midfielder moves forward between the lines and Brooks presses to prevent him from receiving the ball. This distorts the shape of the backline, leaving a space in behind Brooks where a pass could be played, however, nobody exploits this space by making a run into the space and in behind, so Wolfsburg aren’t caused any problems.

This wasn’t a one-off thing Brooks did in the game. He consistently stepped out of the backline, even in deep positions to try and win the ball. But again, in this situation, we can see below Hertha don’t make any runs into the vacated space, and therefore struggle to progress towards the goal. Hertha could have either looked to play a direct ball into space, or used the player out wide to find a better angle to play the pass into. Instead, Hertha dribble and lose the ball.

In the whole game, I only noticed Hertha try and utilise this space once. Lukebakio identifies the space when a midfielder makes a diversion run which centre-back Knoche notices. Lukebakio, therefore, makes a run into space, hoping that his teammate identifies the run and plays a ball in behind, where Lukebakio can then use his pace to get to the ball. Instead, as we can see from the ball carrier’s body shape, the ball is played out wide to the right.

Strangely, Hertha also seemed to suffer a similar problem, but this time were made to pay the price as a result of only having four defenders. Hertha’s backline, particularly their centre backs, were uncoordinated in their movements, causing a staggered defensive line which allowed Wolfsburg space to execute their counter attacks in.

My first example of this can be seen below, where one of the central defenders drops off while one stays. This creates space for a long ball for Wolfsburg, and the centre back can’t challenge Weghorst as if they do and don’t win it, Wolfsburg would be through on goal. For all his qualities, Wout Weghorst is not a particularly quick striker, and so trying to catch his run in behind may have been the better option. Likewise, if the whole defence drops and follows the run, Hertha can defend in a 4v2, rather than a 2v2 which is seen in the example below.

We can see more poor positioning from Hertha below here, with one central defender slightly higher than the other, which benefits the passing angle for Wolfsburg and allows a goal-scoring opportunity. If Hertha’s central defenders got in line with one another, this pass is much easier to cut out. Karim Rekik was particularly suspect in this regard throughout the game, and Wolfsburg’s penalty comes from these kinds of similar situations.

Wolfsburg played to a professional, low-risk game plan which saw them look to sit behind the ball and rely on counter-attacks to seal a win. They executed their game plan excellently but for that one structural issue, and so it will be interesting to see in the coming weeks how their gameplans evolve and how the opposition look to exploit it. Hertha meanwhile looked dull and lacked any tactics or guile in order to unlock Wolfsburg’s block. Therefore, the best team won, and Glasner continued his perfect record in Germany so far.