Going into Saturday’s fixture, Wolfsburg were the last remaining side in the Bundesliga yet to register a defeat. Oliver Glasner’s side have built a reputation this season of playing clinical attacking football in Glasner’s now infamous 3-4-3 formation which he used so prevalently in his time at LASK Linz. On top of this, Wolfsburg have been difficult to break down, and have the best defensive record in the league.

However, on a weekend that threw up some interesting results, Borussia Dortmund cruised to a comfortable 3-0 victory.

Dortmund have had an inconsistent start to the season, but this win has set them back on the right path in their quest to regain the Meisterschale.

The league is so tight that Wolfsburg fell from second to seventh whilst Dortmund leapfrogged them, and with Saturday’s impressive victory they now sit second themselves, three points off of the leaders Borussia Mönchengladbach.

This tactical analysis looks at the tactics used by Glasner and Lucien Favre as Wolfsburg and Dortmund battled it out in the Bundesliga. 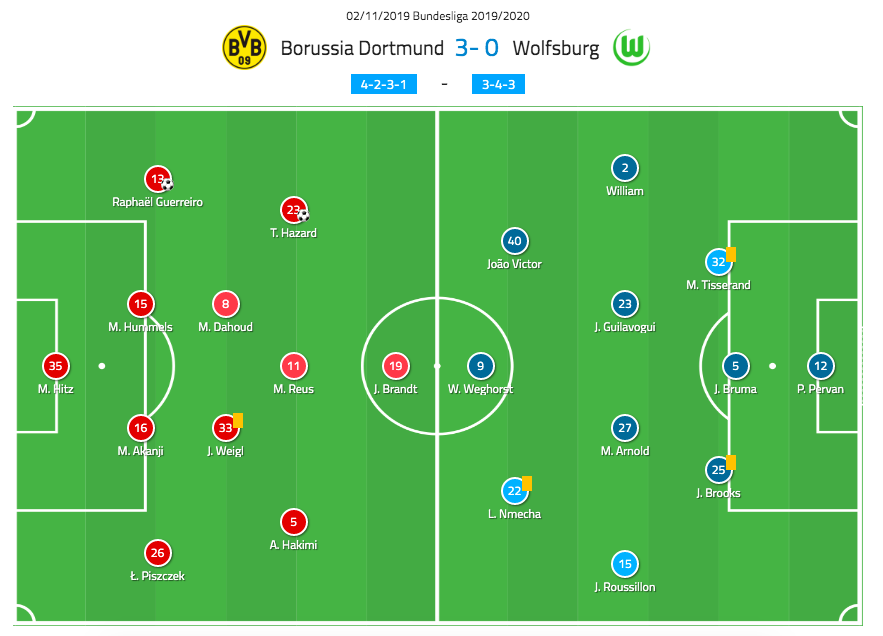 Dortmund lined up in a 4-2-3-1 with Hakimi pushing up to play in the right-wing position with Łukasz Piszczek sitting behind him in right-back.

Mahmoud Dahoud and Julian Weigl took the holding positions and along with the positioning of Achraf Hakimi, it suggested that Favre was taking a cautious approach. Julian Brandt played as a false nine, coming in for Jacob Bruun Larsen who played as the lone striker in Dortmund’s midweek DFB Pokal win over Mönchengladbach.

Wolfsburg made a couple of changes after their 6-1 humbling at the hands of RB Leipzig in the DFB Pokal last week. Lukas Nmecha came in for Josip Brekalo as did Josuha Guilavogui for Yannick Gerhardt. Jérôme Rousillon returned to the starting line up in place of Renato Steffen, and finally, Kevin Mbabu was sacrificed for John Brooks to play as part of a back three.

Without possession, Glasner looked to have his wing-backs drop deep and form a back five allowing little space for Dortmund’s attacking players to use. The analysis below shows the back five as Wolfsburg defend in a 5-2-3 formation, where the wing-backs are expected to support the defence without possession, but in possession give width to the midfield. 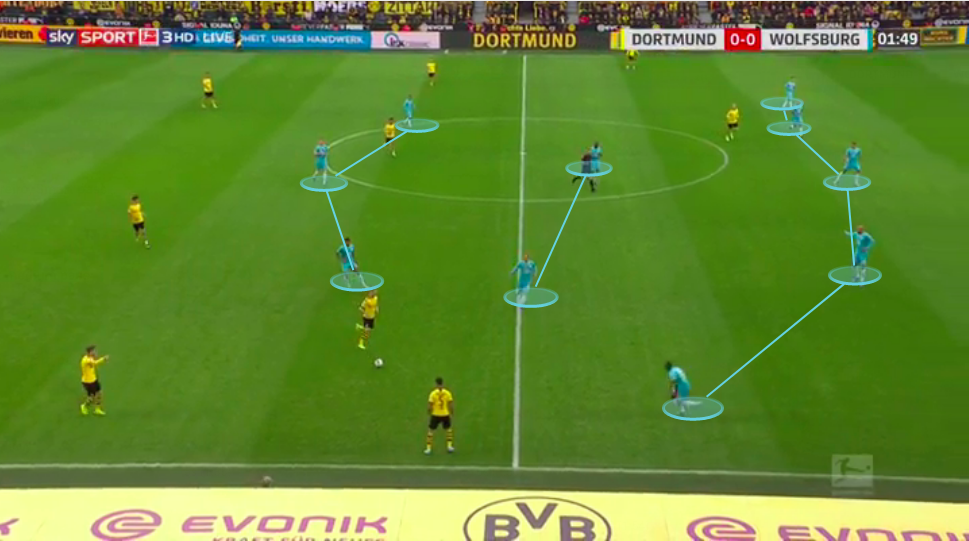 They worked across as a unit and were very compact. However, with essentially only two central-midfielders they had little choice but to be. Wolfsburg’s front three also dropped deep to crowd the midfield and create as much traffic as possible, as we can see below. Wolfsburg’s midfield two worked as a unit all game and are an incredibly hard-working pair, and have to be purely by the nature of Glasner’s demanding 3-4-3. The two were tasked with shielding the back four from being penetrated from central areas and protected these passing lanes. This was their priority as a pair and Glasner wanted to starve the likes of Marco Reus and Brandt from receiving the ball in dangerous, central areas. 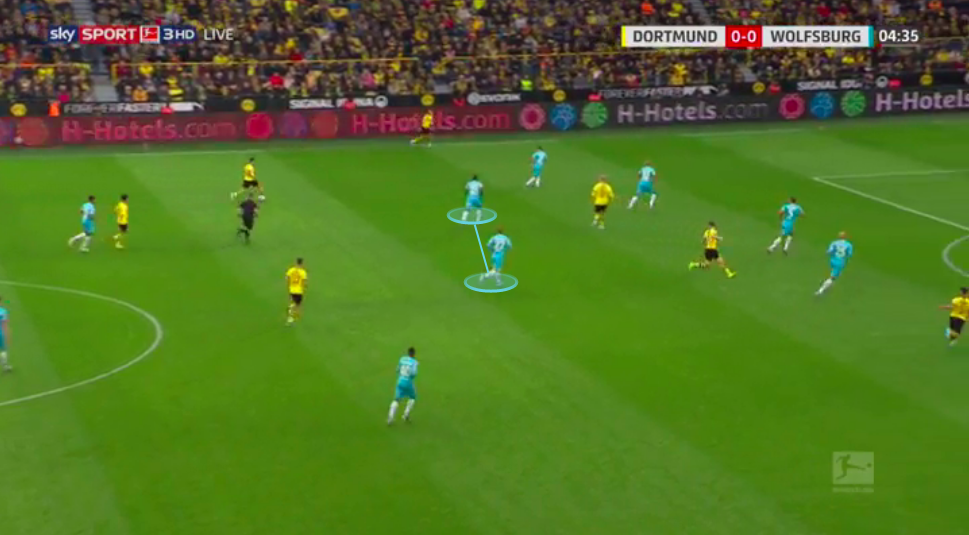 When out of possession and with Dortmund building from the back, Wolfsburg also pressed high as a unit and worked to win the ball back early. The front three worked tirelessly throughout the game to do so with the closest to the ball pressing, and the supporting players pressing with a delay. 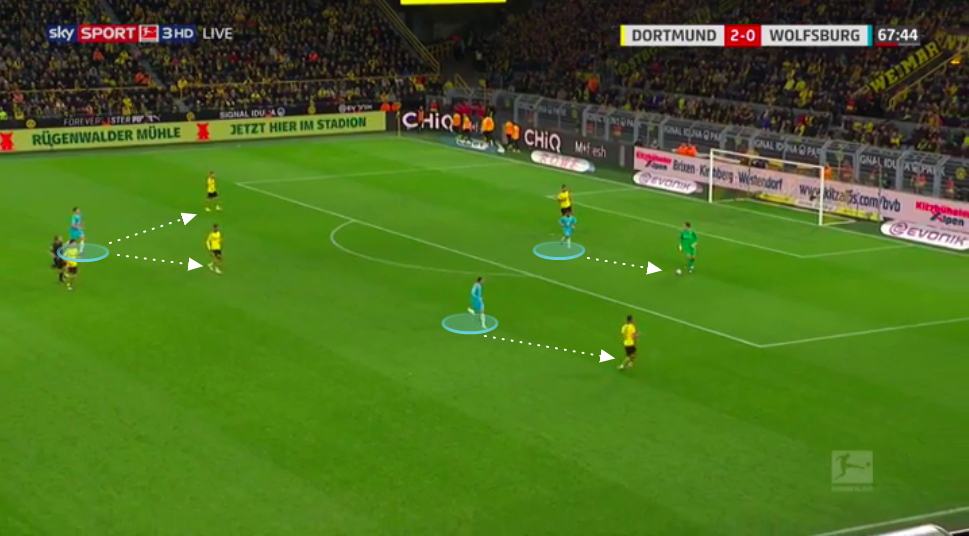 However, as soon as the pass was played to the Dortmund player they were marking, they engaged aggressively, and with the ball played into wide areas, the Wolfsburg forward line worked together to press with intensity and force the hosts into errors. Below we can see that two more players are supporting the two pressing left-back Raphaël Guerreiro, waiting for him to attempt a pass inside. Dortmund defended from the front dropping back into a 4-4-2 to defend against Wolfsburg when the opposition had the ball. 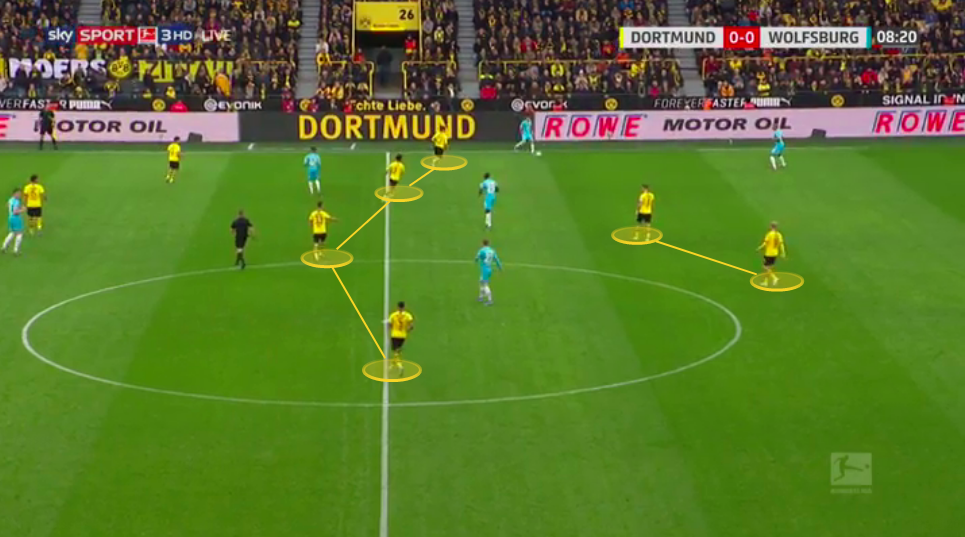 To do this Hakimi dropped deep into play as a conventional right-midfielder. Dortmund pressed the ball with a front two with the aim to prevent the ball being played centrally and as soon as the ball was played wide, they blocked off the switch from Wolfsburg’s back three and forced the ball wide.

In the image below we can see that Dortmund allow Wolfsburg the ball but the front two are stopping the ball from being played through the middle, forcing Jeffrey Bruma to pass wide. 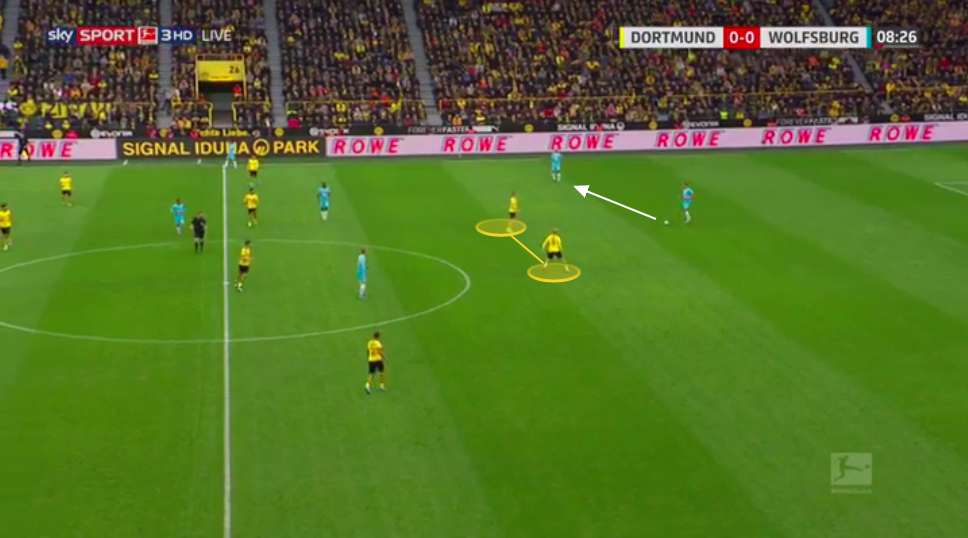 As soon as the ball is played wide they press with intensity and arc their run, stopping the switch from Wolfsburg’s three. The compactness of Dortmund’s midfield also discourages the short ball into the middle and encourages either a ball over the top or to the wing-back. 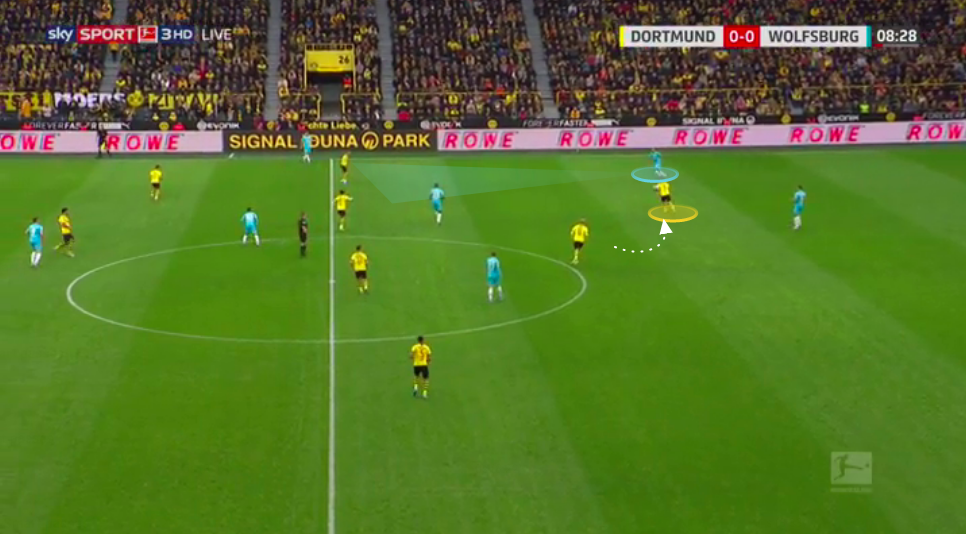 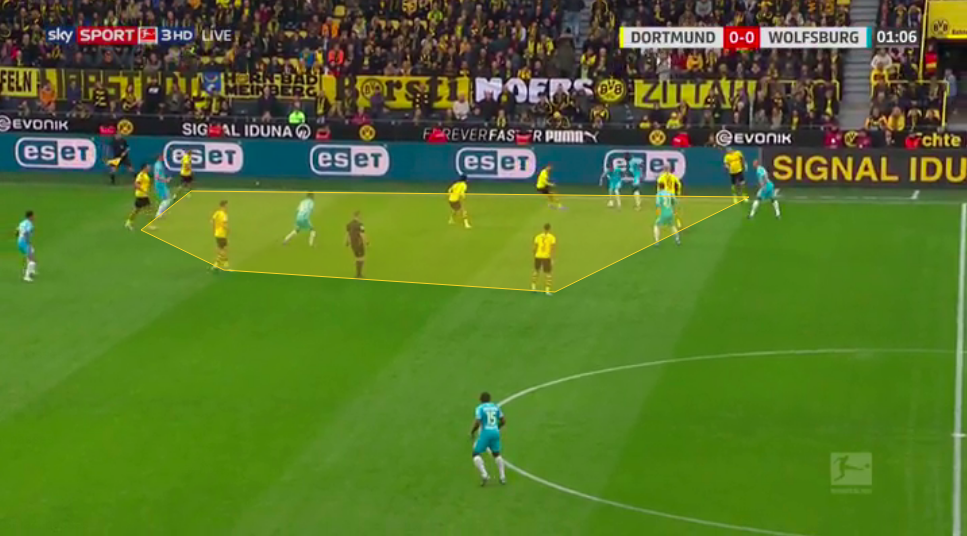 With the ball in an advanced position out wide Dortmund dropped men back in numbers and packed their own penalty area. Wolfsburg found this hard to penetrate and were forced into shots from distance. When defending from a wide area Favre ensured there were plenty of men ready to defend a cross, wary of the aerial threat posed by Wout Weghorst. However, on top of this, Favre also had his midfielders support his full-backs and swarm the opposition on the flanks as they looked to break down play before Wolfsburg had a chance to cross. 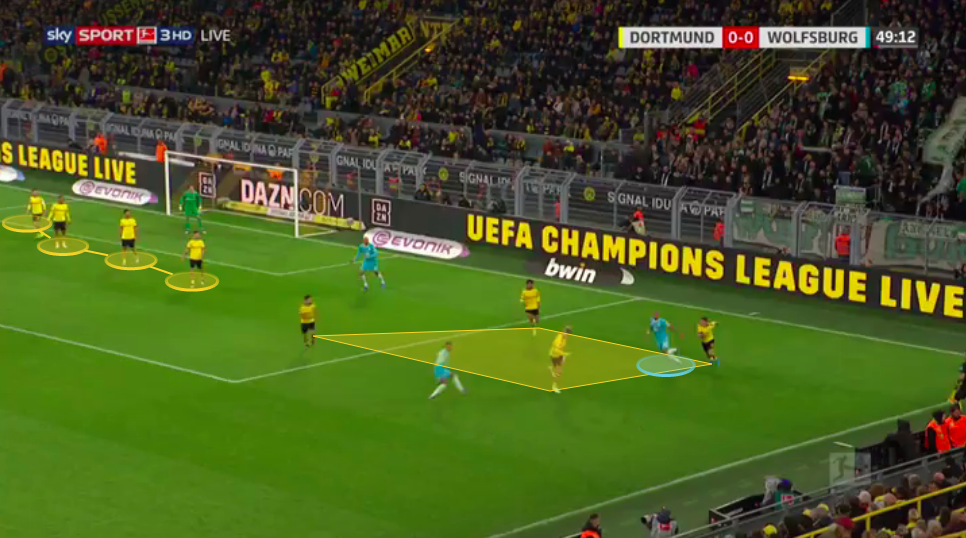 Dortmund’s attack and how they targeted Wolfsburg’s back three

When they had won the ball back, Dortmund looked to play forward as often as possible. They had players drop into pockets of space between the lines and the first port of call once in the transition to attack was to pick one of these players out.

When Dortmund played out from the back Weigl would drop deep to offer an option with Dahoud slightly higher, however, Dahoud had license to drop in as well and build from the back. But when defending the two would work close to one another. 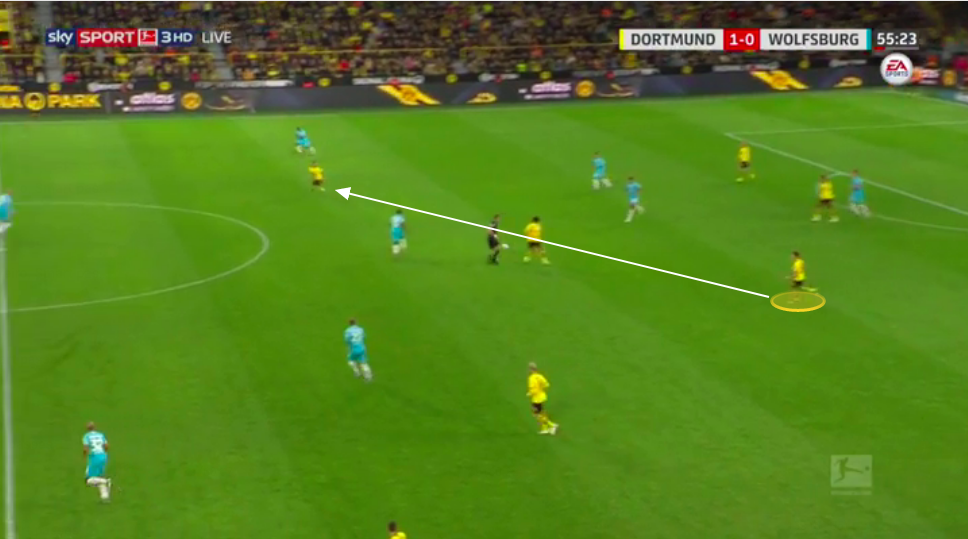 They were effective at doing this and it enabled Dortmund to launch their specific attacking tactics on Wolfsburg’s back three as quickly as possible.

Julian Brandt was also an option, playing as a false nine, and he would drop into midfield areas in the middle of the pitch, allowing a duo from Reus, Hazard and Hakimi (although usually the former two), to run into space behind him. 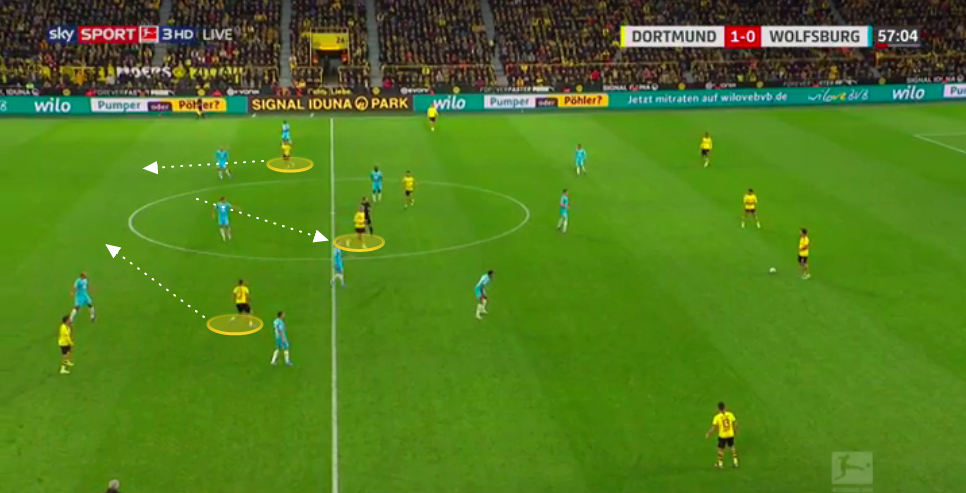 Dortmund also engaged in patient build-up play, albeit this still had the desired goal to play vertically efficiently and provide space for the forward line to isolate Wolfsburg’s defenders.

With the keeper in possession, both centre-backs split wide, and full-backs pushed high. This enabled a midfielder, usually Weigl, the opportunity to drop in and receive. At times Dahoud would do this as well, and both would drop in together. However, the goal was as much to bring Wolfsburg forward and allow space for the forwards to work in. 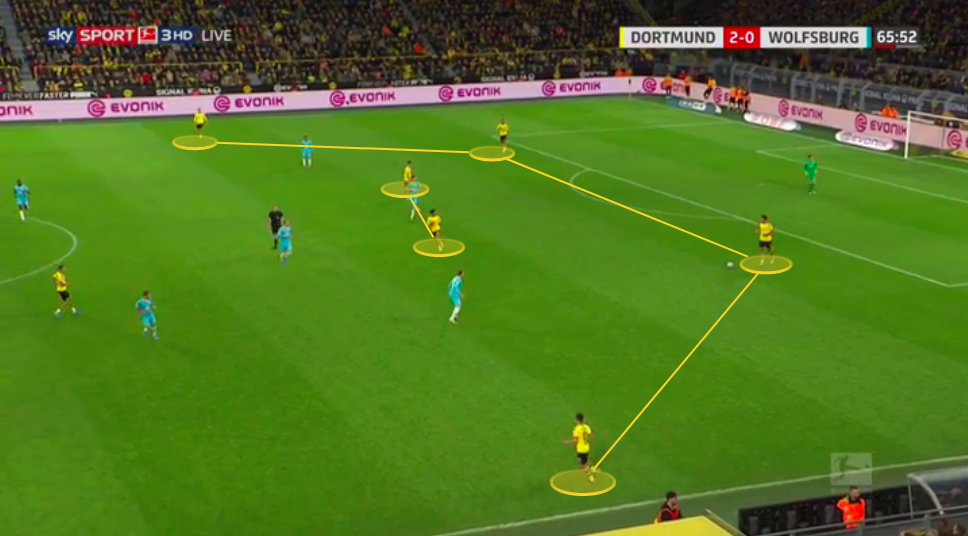 Which brings us onto Dortmund’s main attacking aim, and how they scored the first two of their three goals. Favre wanted to exploit Wolfsburg’s back three by having his forwards run directly at them and pull them out of position.

Firstly, with the ball in the wide area and when on a fast break, Dortmund’s wide players looked to attack the defender in the middle of Wolfsburg’s back three, Bruma. 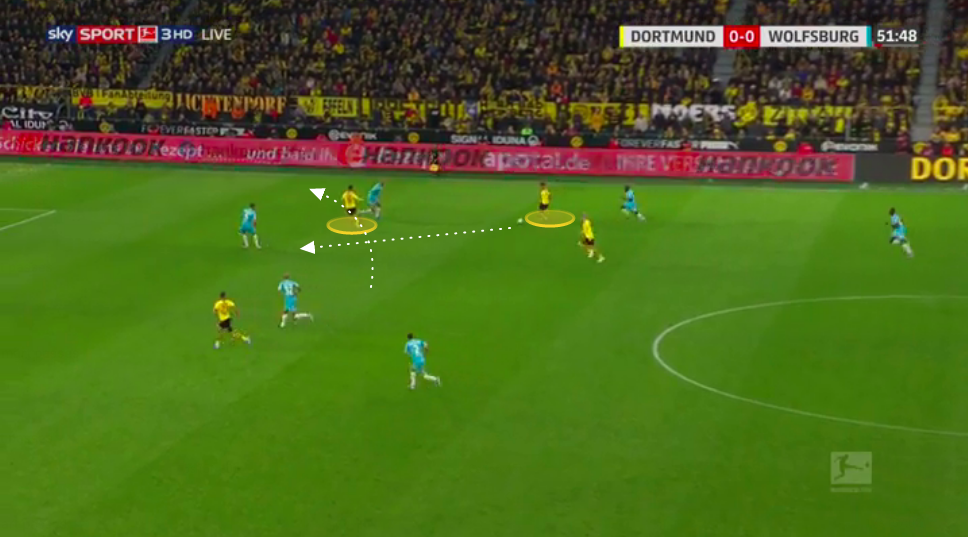 In doing so they forced Bruma to come and meet the attack, which meant both Wolfsburg’s outer central defenders had to drop narrow behind Bruma to protect the central space behind the defender. 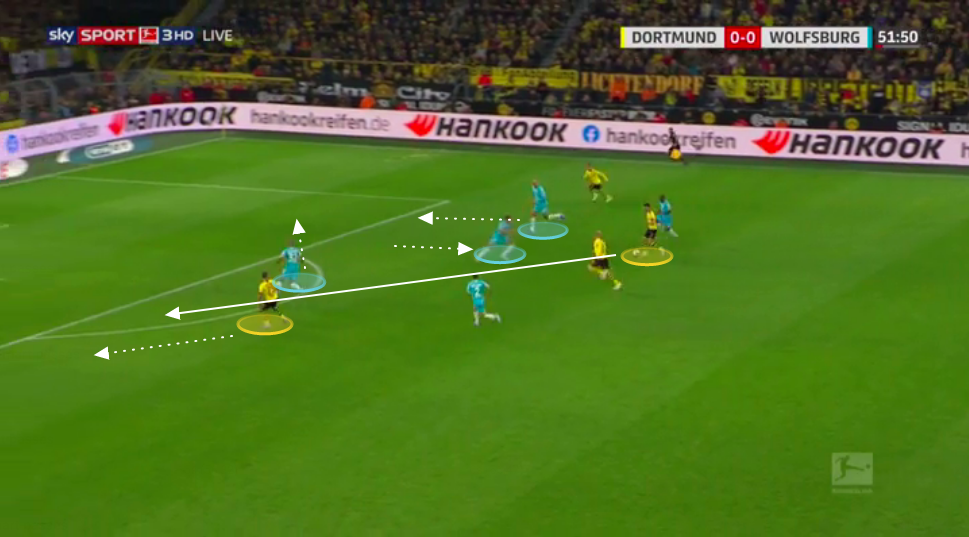 This is precisely what happened for Dortmund’s first goal. In the image above we are able to see the movement of the forwards which brought Wolfsburg’s defence over and allowed Thorgan Hazard space to receive, shoot, and score.

As mentioned earlier, Wolfsburg looked to drop into a back five and this meant that their back three were able to stay compact. However, Favre’s side were ready for this eventuality, and their second goal also came from bringing the defence out of position. With them looking to run at the defence, width in attack wasn’t as important as it normally is to Dortmund, unless it was able to facilitate space for a player to run at the Wolfsburg defence.

By playing narrow this meant that Wolfsburg’s back five became narrow as well, and their back five grouped together. Due to the lack of width, it nullified the use of the extra centre-back and left space on the flanks for Dortmund to run into. To do so they ran at the wing-backs who were tucked in. By bringing the wing-backs out towards the ball-carrier they were able to create an overload where a simple overlap meant they could exploit the space behind the Wolfsburg wing-back and to the side of the centre-backs. 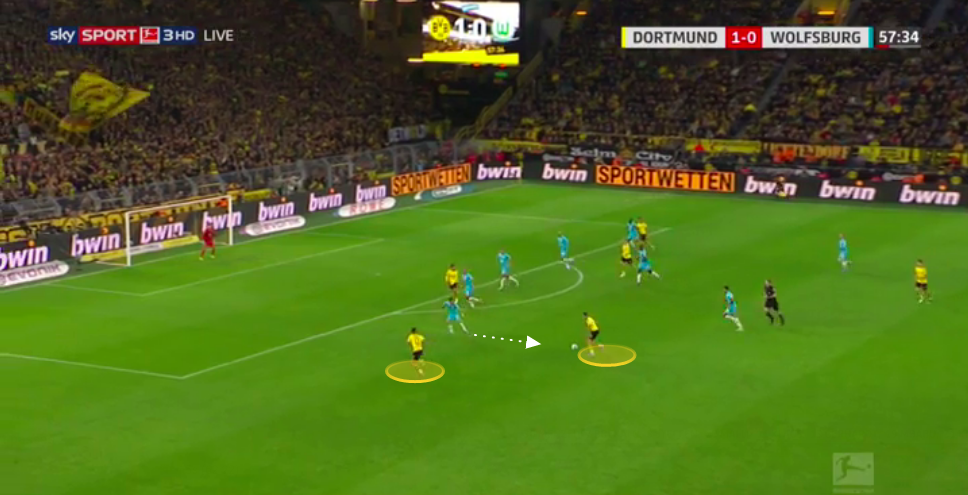 This is again what happened for the second goal, and it was twice in the space of six minutes that Dortmund were able to exploit the limitations of Wolfsburg’s back three.

It shows how impressive Wolfsburg have been defensively when their defence is still the best in the league, despite Borussia Dortmund cruising to a 3-0 victory. Yet they were thoroughly found out in this game, and having had an even worse experience against Leipzig midweek, Glasner may need to revisit the blueprint for his back three going forward.

For Favre, this was a much-welcomed win and will help to ease a little of the pressure coming from the media and certain areas of Dortmund’s fan base as he’ll hope that Dortmund finally have a base from which to push on this season and put their early-season inconsistencies behind them.