Augsburg welcomed RB Leipzig to the WWK Arena for their final match in this Bundesliga season. While Augsburg were safe from relegation and Leipzig had already mathematically qualified for the UEFA Champions League for next season, the two teams competed in a tightly-contested match that saw a Timo Werner brace secure the win for RB Leipzig.

This tactical analysis will examine the tactics used by both RB Leipzig and Augsburg during their final Bundesliga match. The analysis will highlight Leipzig’s struggles against Augsburg’s compact defensive set-up, as well as addressing how both teams created their best chances. 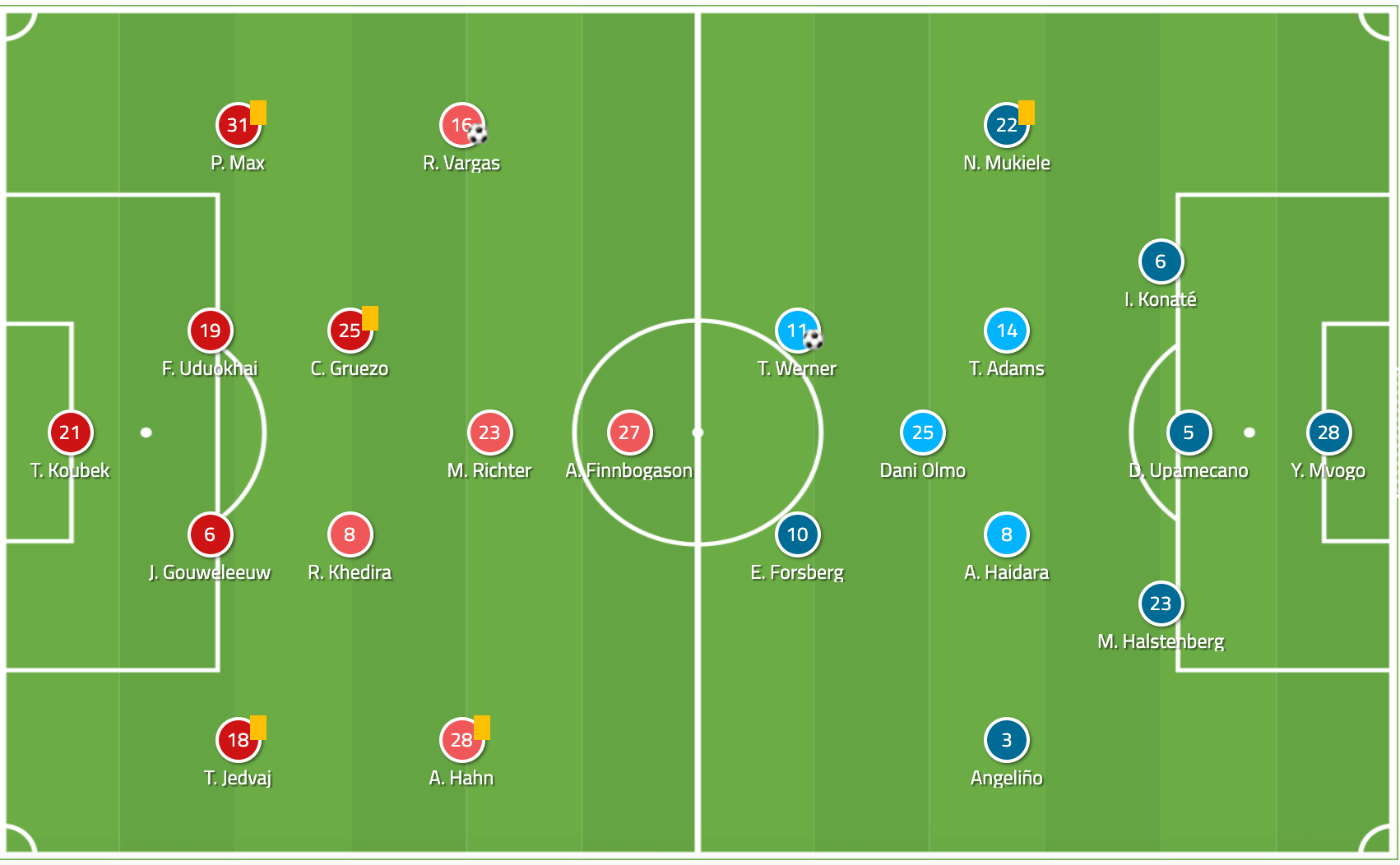 Heiko Herrlich sent his squad out in a 4-4-1-1 formation with Tomáš Koubek in goal. The two centre-backs were Jeffrey Gouweleeuw and Felix Uduokhai, with Philipp Max as left-back and Tin Jedvaj as the right-back. Their two central midfielders were Rani Khedira and Carlos Gruezo; they were supported by Ruben Vargas on the left flank and André Hahn on the right flank. Marco Richter and Alfreð Finnbogason were the two forwards, with Finnbogason being the higher of the two.

Julian Nagelsmann sent his men out in a 3-4-1-2 formation. Yvon Mvogo began the match in goal with the trio of Ibrahima Konaté, Dayot Upamecano, and Marcel Halstenberg as centre-backs. Tyler Adams and Amadou Haidara worked centrally with Angeliño on the left flank and Nordi Mukiele on the right flank. Dani Olmo was the attacking midfielder who supported Timo Werner and Emil Forsberg, who were the two forwards for the match.

Leipzig struggle against a compact defence

Augsburg seemed content to give Leipzig most of the possession in the match, with Augsburg only managing 37% of the possession compared to Leipzig’s 63%.This is not the first time Leipzig have faced this before (see their match against Freiburg), but they have certainly struggled against teams that are willing to sit back and defend. One of the most dangerous aspects of Leipzig’s game is their ability to exploit transitions; ceding possession eliminates a lot of Leipzig’s ability to take advantage of transitions. 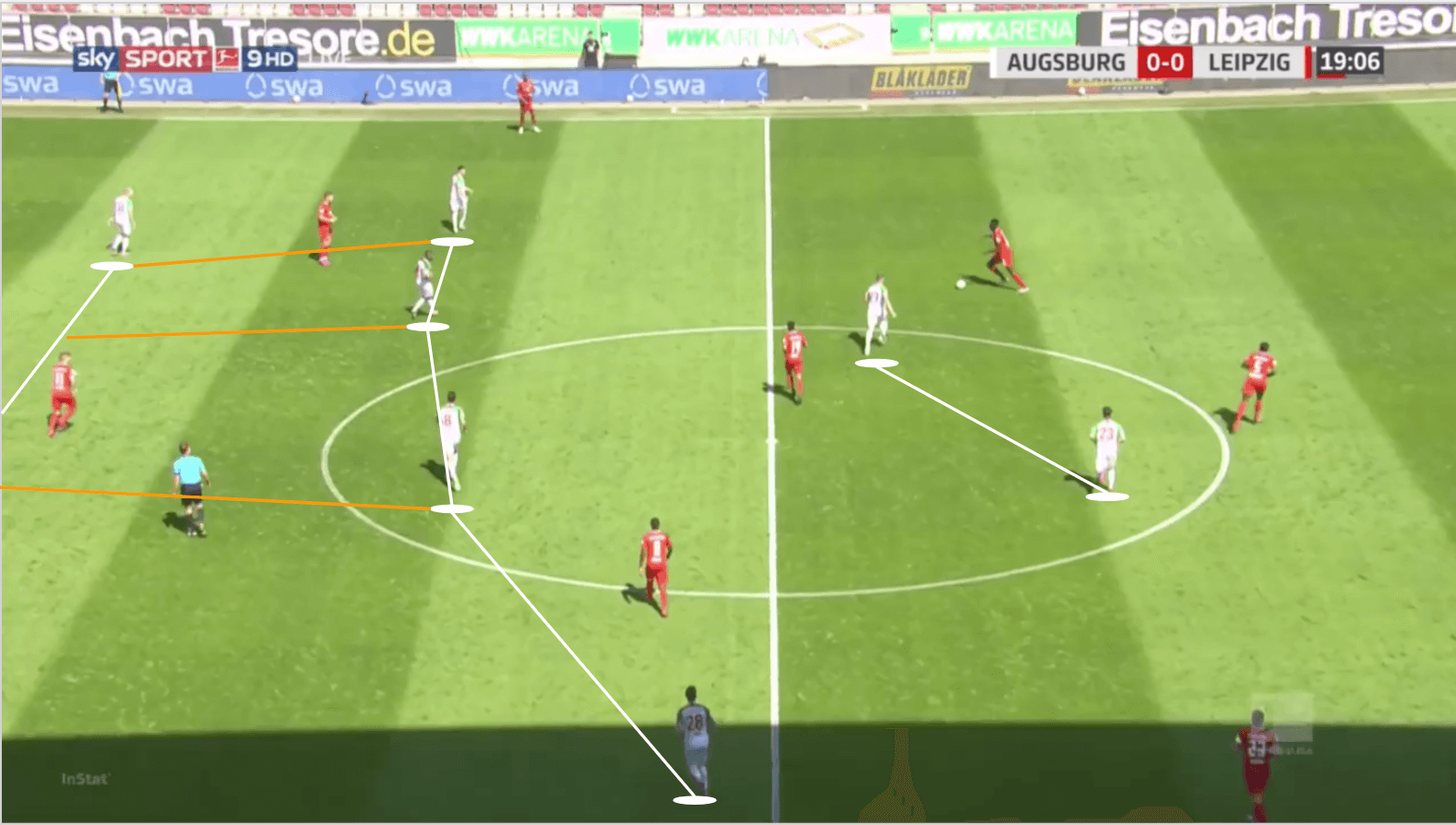 Above is an example of how compact Augsburg was. They set up defensively in a 4-4-2, which would become a 5-4-1 closer to their own goal, with a winger dropping depending on what side Leipzig would attack on. The orange lines highlight the amount of space in between their two lines of four; this essentially made it incredibly difficult for Leipzig to play through because whoever was in between the lines, whether it was Olmo, Werner, or Forsberg, would not have time to receive the ball and do anything meaningful with it.

One way Leipzig looked to combat this was through diagonal passes that would cross multiple vertical channels of the pitch. They looked to shift Augsburg from side to side in order to cause confusion and defensive disarray. 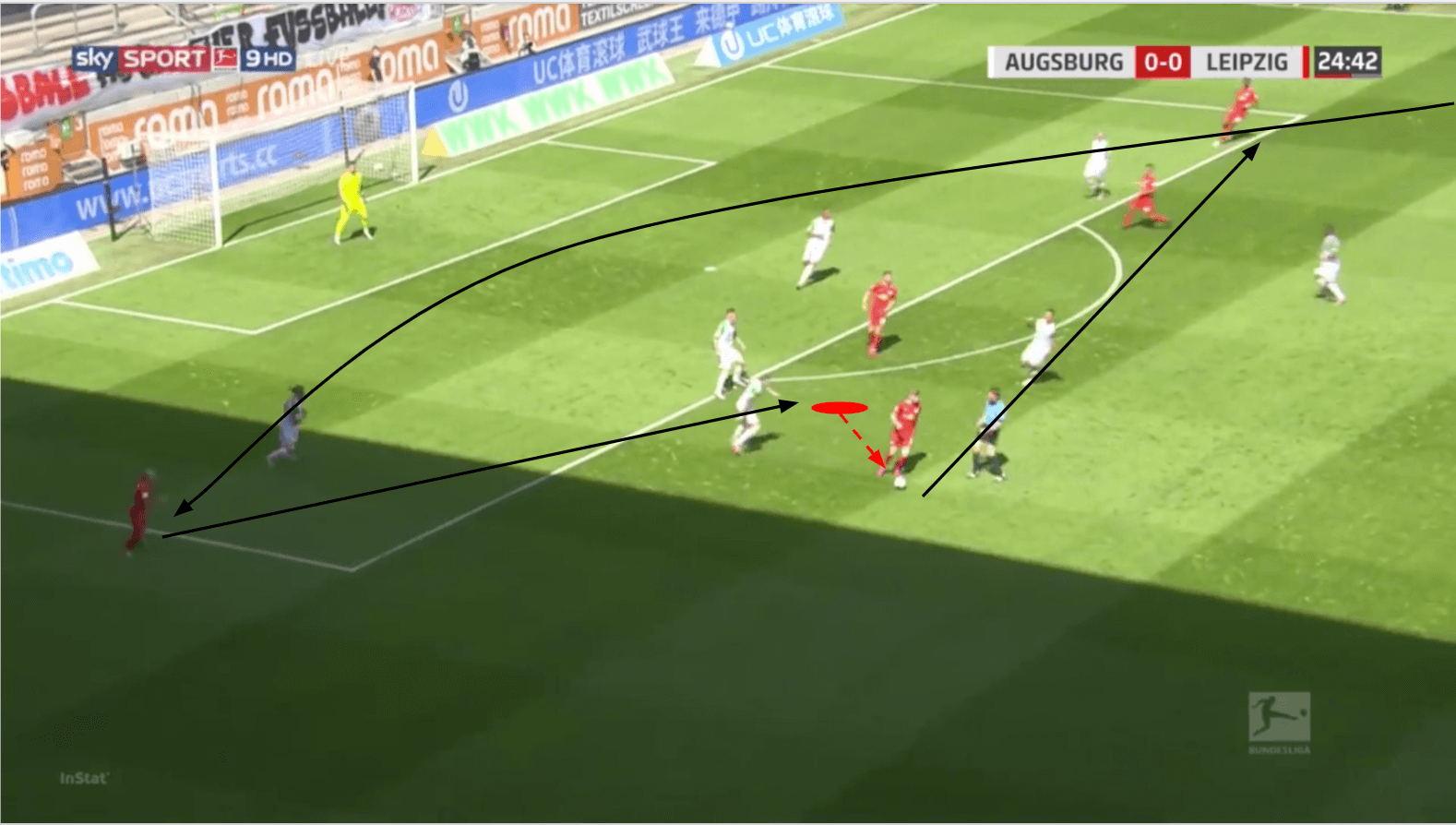 In the instance above, Leipzig started with the ball in the right half-space where Forsberg had dropped to receive a pass. Forsberg then played a diagonal ball to Angeliño who was running down the left flank. This caused Augsburg to switch over quickly. Angeliño then used his first touch to find Timo Werner in between the two defensive lines that were shifting from left to right. Werner’s first touch took him into space away from goal; he then quickly attempted to play another diagonal ball from left half-space to the right half-space. This combination of diagonal passes one after the other led to Nordi Mukiele being wide open, but Werner’s pass was unable to find him. While the diagonal balls effectively disorganised Augsburg’s defence, Leipzig weren’t able to capitalise on any of the opportunities stemming from them.

Another strategy Leipzig used was to overload the midfield in order to create space behind the midfield line of four. They looked to negate the compact structure of Augsburg’s defence by forcing their midfield line to step up and defend higher up the pitch. 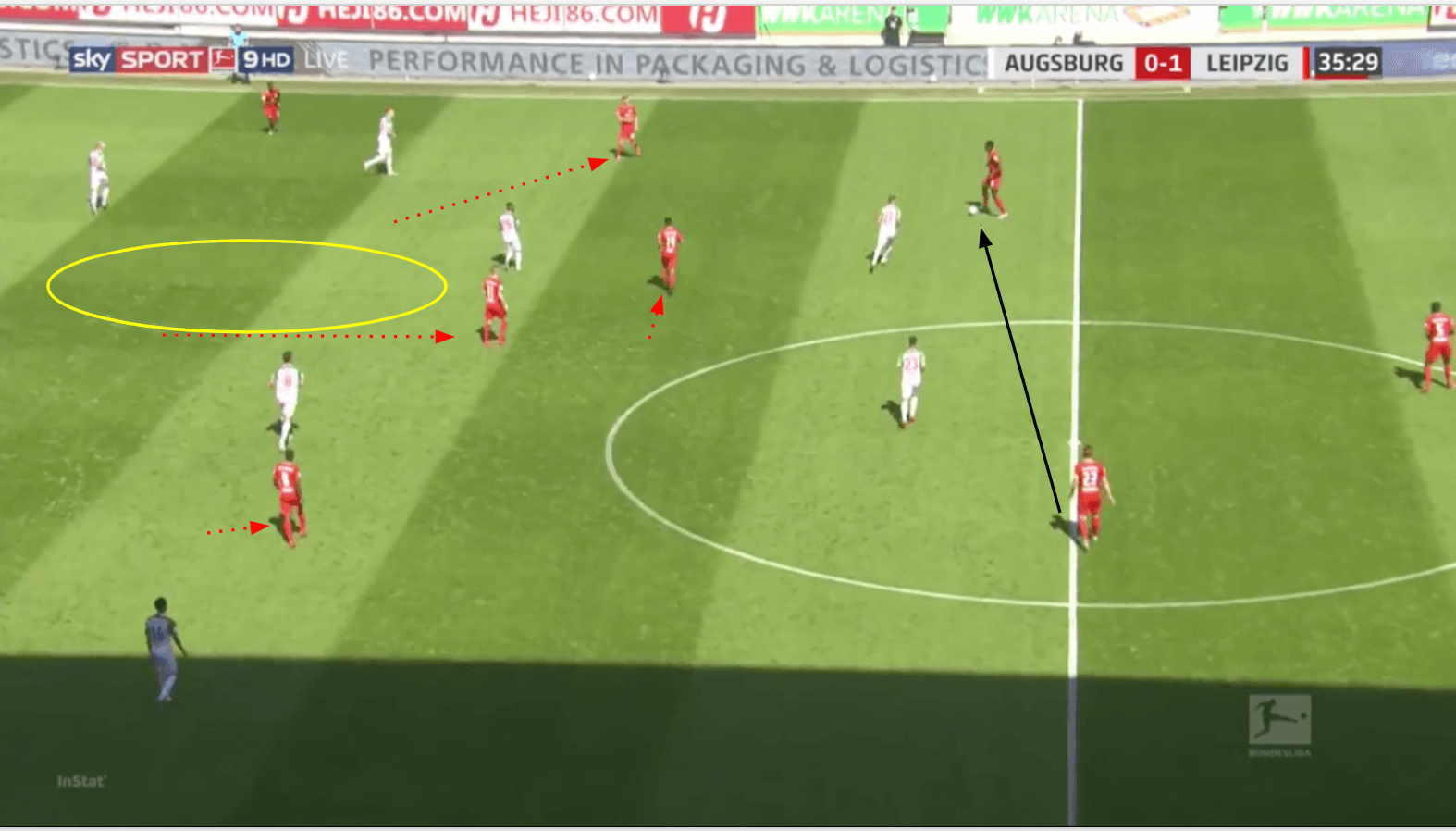 Here, Olmo, at the top of the image, dropped outside in order to be a passing option as Werner, Tyler Adams, and Amadou Haidara stepped in front of Augsburg’s line of midfielders. This created more room in between the lines. While the creation of that space was effective, Leipzig were unable to exploit it because they had used so many men to create it. The only real option was to have someone like Werner, Adams, or Haidara receive a pass with perfect body shape that would allow them to step into that space with their first touch. Leipzig struggled to do this consistently. When they did, it was effective and provided them with a chance on target. 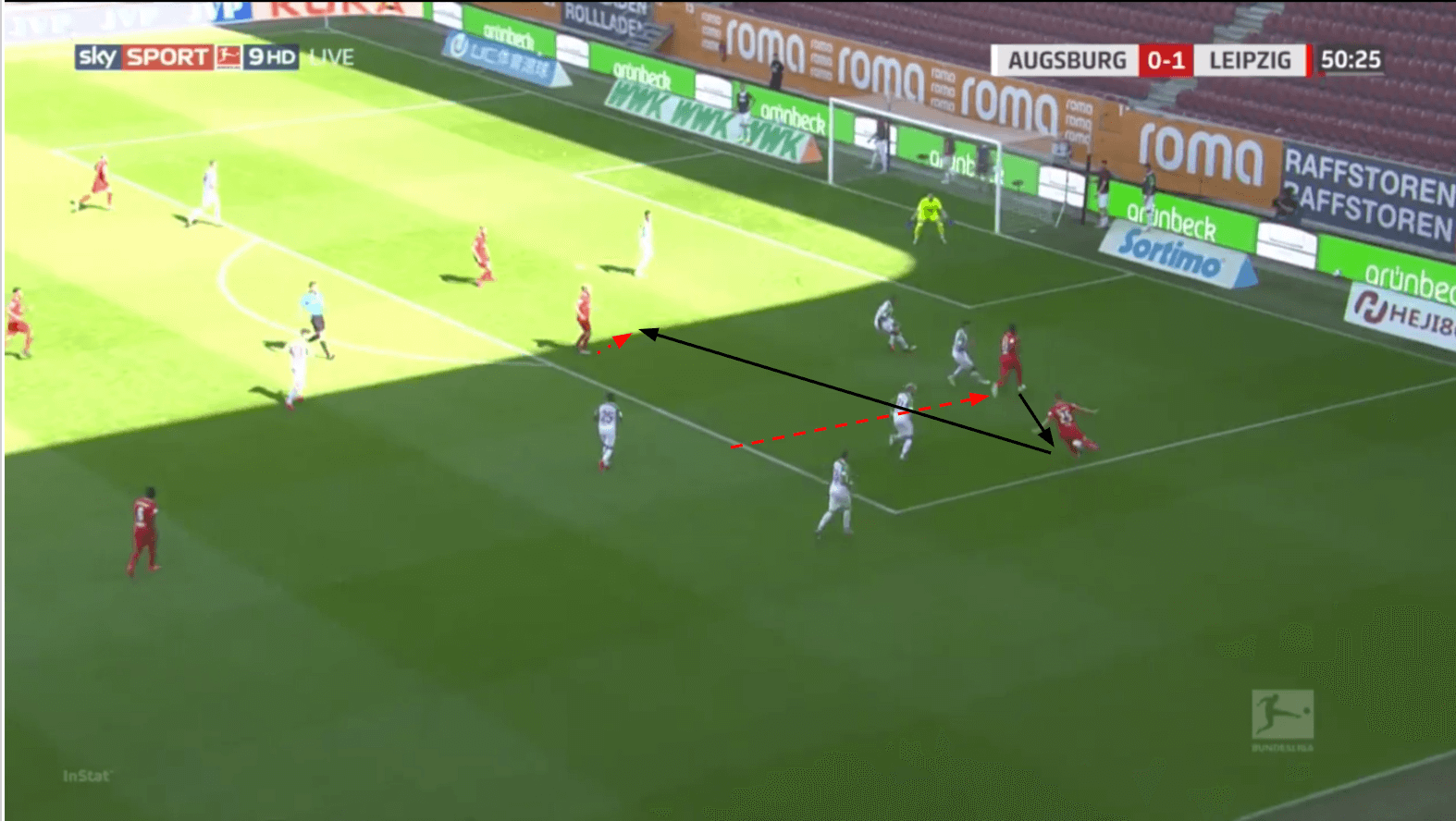 Mukiele played a 1-2 pass with Olmo, which allowed him to dribble through the half-space between two defenders. Mukiele’s first touch took him forward, which was able to happen due to his body shape. Mukiele dribbled forward, attracting the attention of the defenders in the process. He laid the ball off to Olmo, whose first touch found Forsberg in open space. Unfortunately for Leipzig, Forsberg’s shot was blocked and went out for a corner.

Werner exploits space in behind

Leipzig continued to struggle to break down Augsburg whenever they were able to set up their defensive structures and remain compact. While they did this most of the game, Leipzig were still able to take advantage of the space that was behind their defensive line, particularly when Augsburg set their line higher up the pitch. 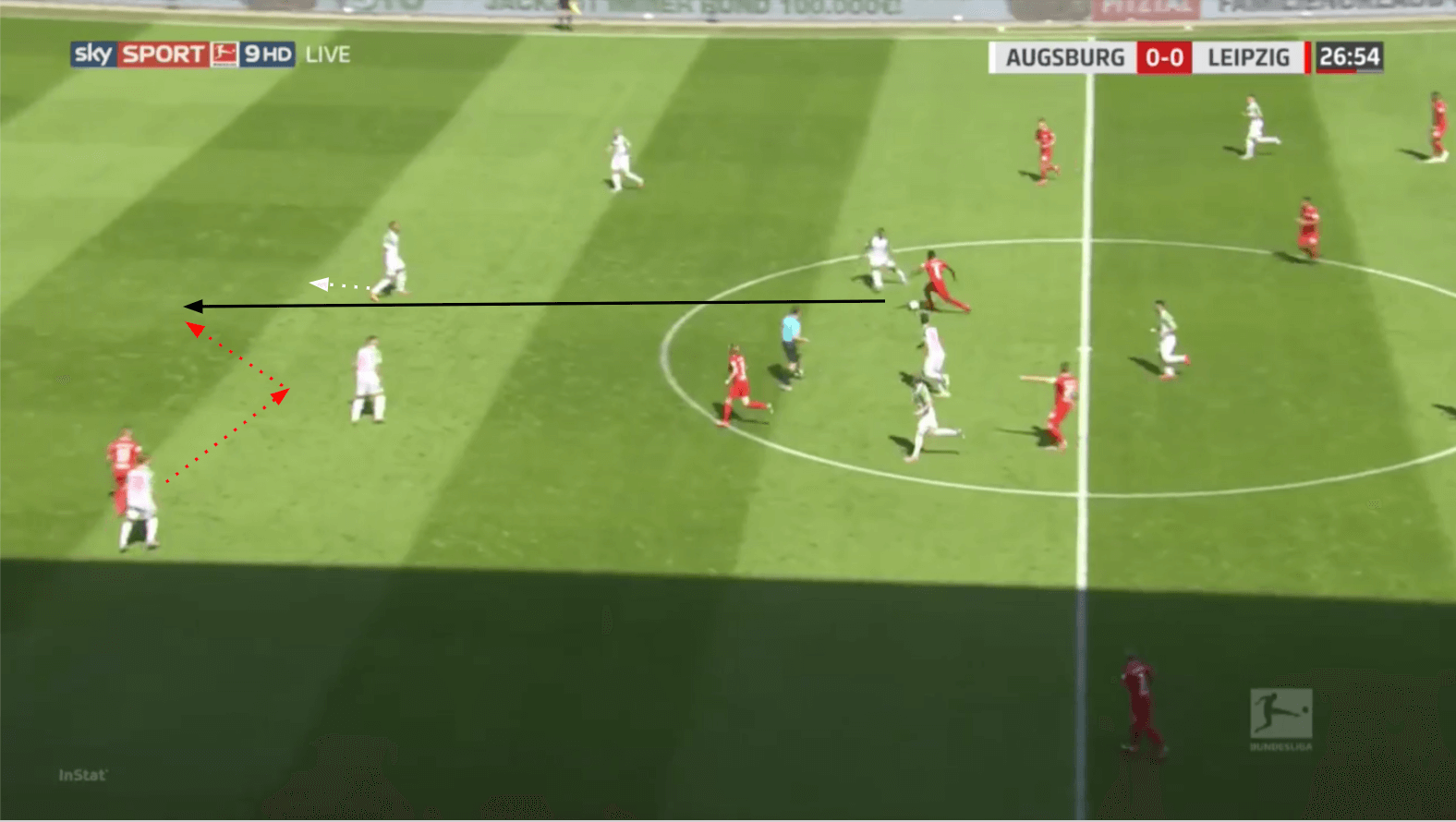 Werner’s first goal came from him recognising the lack of Augsburg’s defensive structure. Leipzig’s midfielders had drawn in the Augsburg midfield, creating a lot of space for Haidara to dribble up the centre of the pitch. Augsburg’s midfield was very slow to react. Werner, from an offside position that causes headaches for defenders, checked back onside before receiving a vertical pass from Haidara. Werner was able to get onside because Felix Uduokhai had stepped back before the rest of his defensive line did. All he had to do was dribble around Tomáš Koubek, and Leipzig were up 1-0.

Werner continued to exploit Augsburg’s midblock with his runs into the space behind. 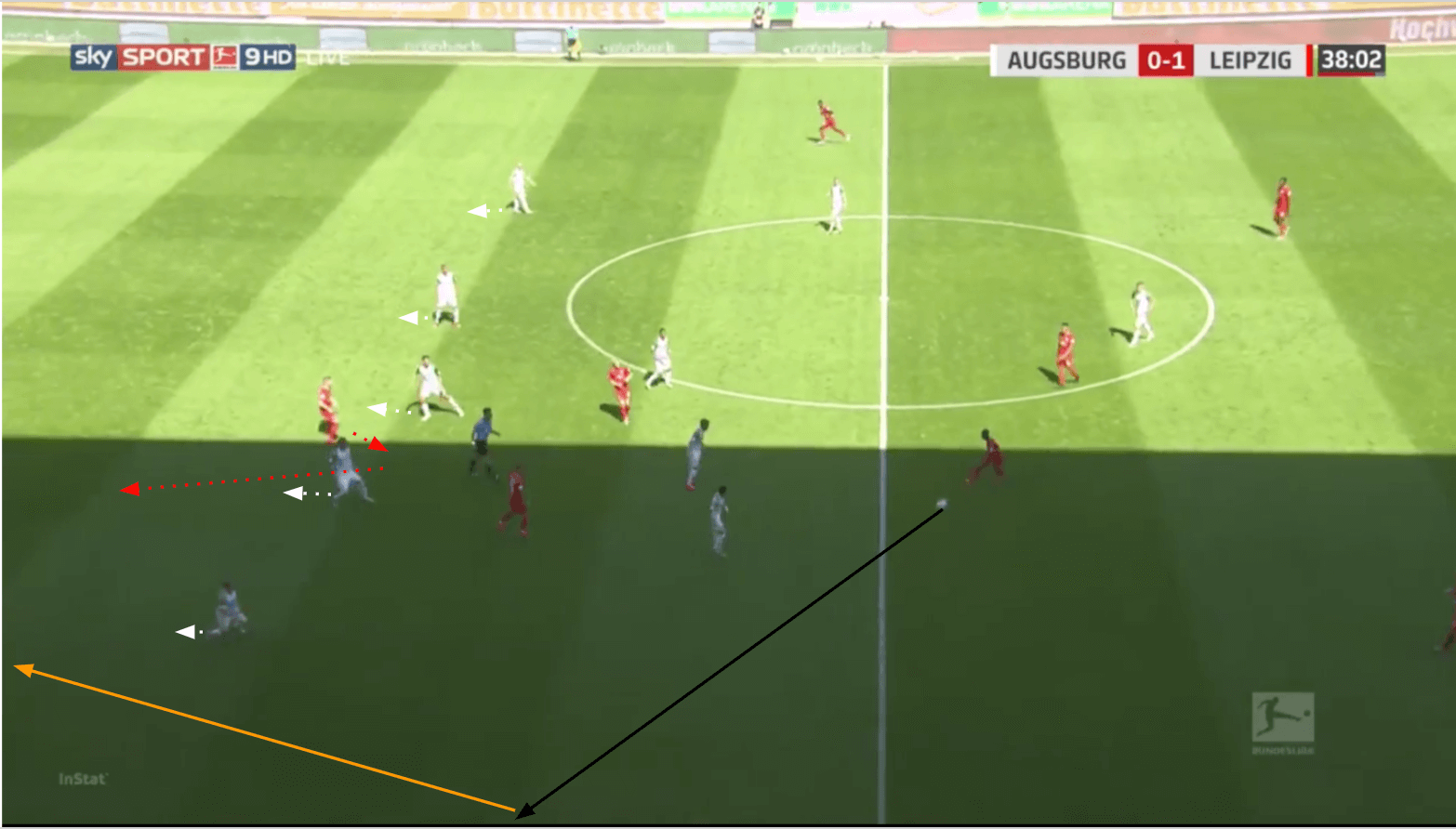 Again, Werner began his run from an offside position. This positioning is a headache for defenders and also causes confusion about when to step as a unit, the exact problem that led to Leipzig’s first goal. In the image above, Werner stepped back into an onside position as the ball was passed to the left flank. He was looking for Angeliño to deliver the pass in orange with his first touch, as he made the run in behind as the ball arrived at Angeliño’s feet. The pass from Haidara to Angeliño was too slow, so Angeliño was unable to make the orange pass, and he had to play it back to Haidara. Had the pass been played, Werner would have again been in behind with just the goalkeeper to beat.

Werner’s second goal was also a result of him exploiting space behind Augsburg’s back line when they were positioned higher up the pitch. Again, Werner was able to cause confusion by starting in an offside position. 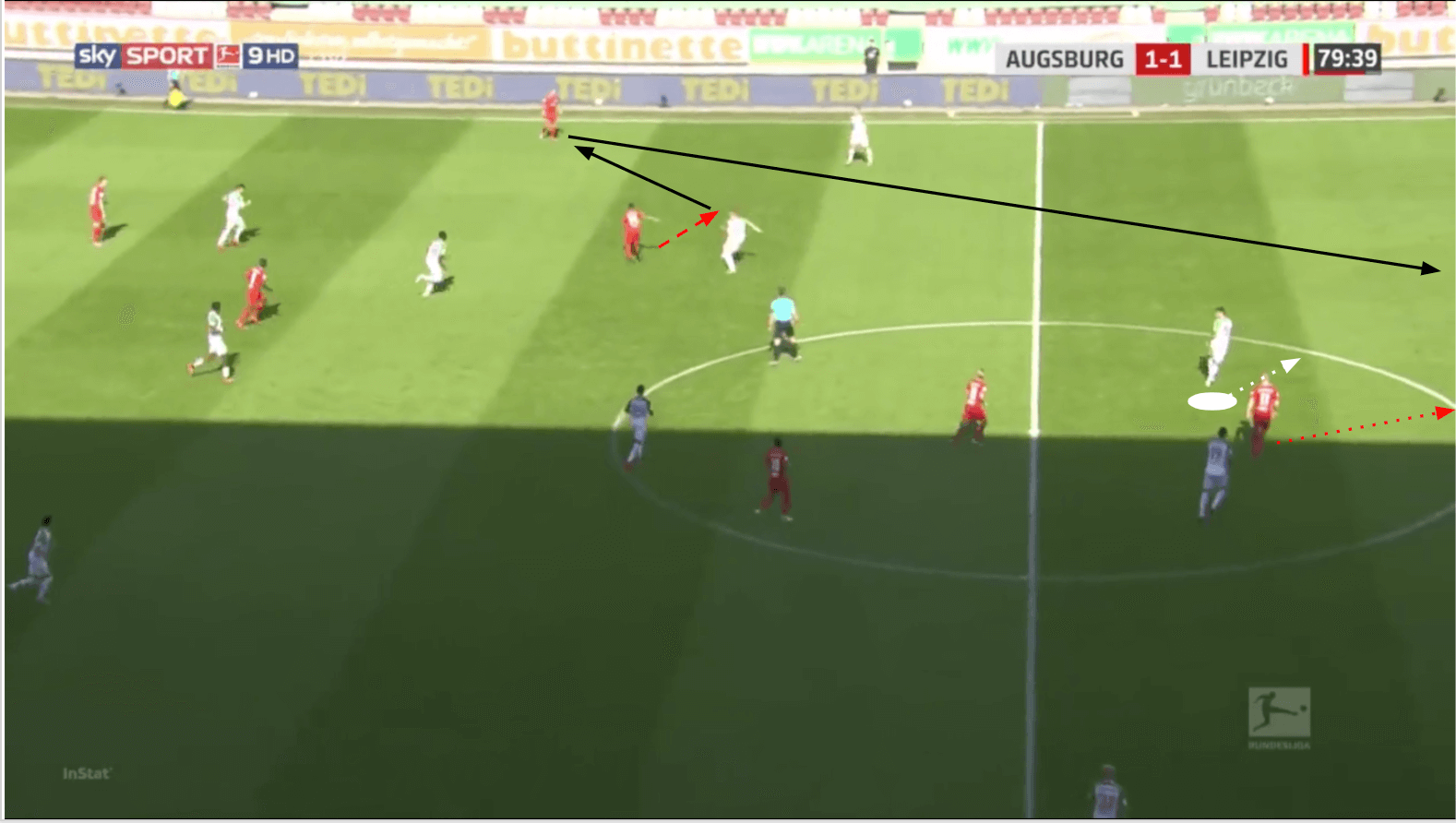 In the image above, Werner was initially offside. Marek Suchý, the man highlighted with the white circle, was checking his shoulder. His reaction to Werner being behind him (despite being offside) forced Suchý to drop a couple of steps, putting Werner in an onside position. Augsburg’s centre-backs were now not in the same line. As the ball found its way to Angeliño, who was clearly going to send it over the top of the defence, Suchý attempted to step forward. However, it was too late: Werner was in behind, and he was able to hold off a strong challenge from Uduokhai, turning and firing into the back of the net.

Augsburg didn’t have a whole lot of possession, as mentioned about, but when they did have it, they looked to exploit Leipzig’s left flank. They had a total of 14 attacks down the left side, while just having one down the middle and five down the right side. Those 14 attacks led to 100% of their .19 xG for the match. Augsburg looked to exploit the relationship between Ibrahima Konaté, the right centre-back, and Nordi Mukiele, the right wing-back. 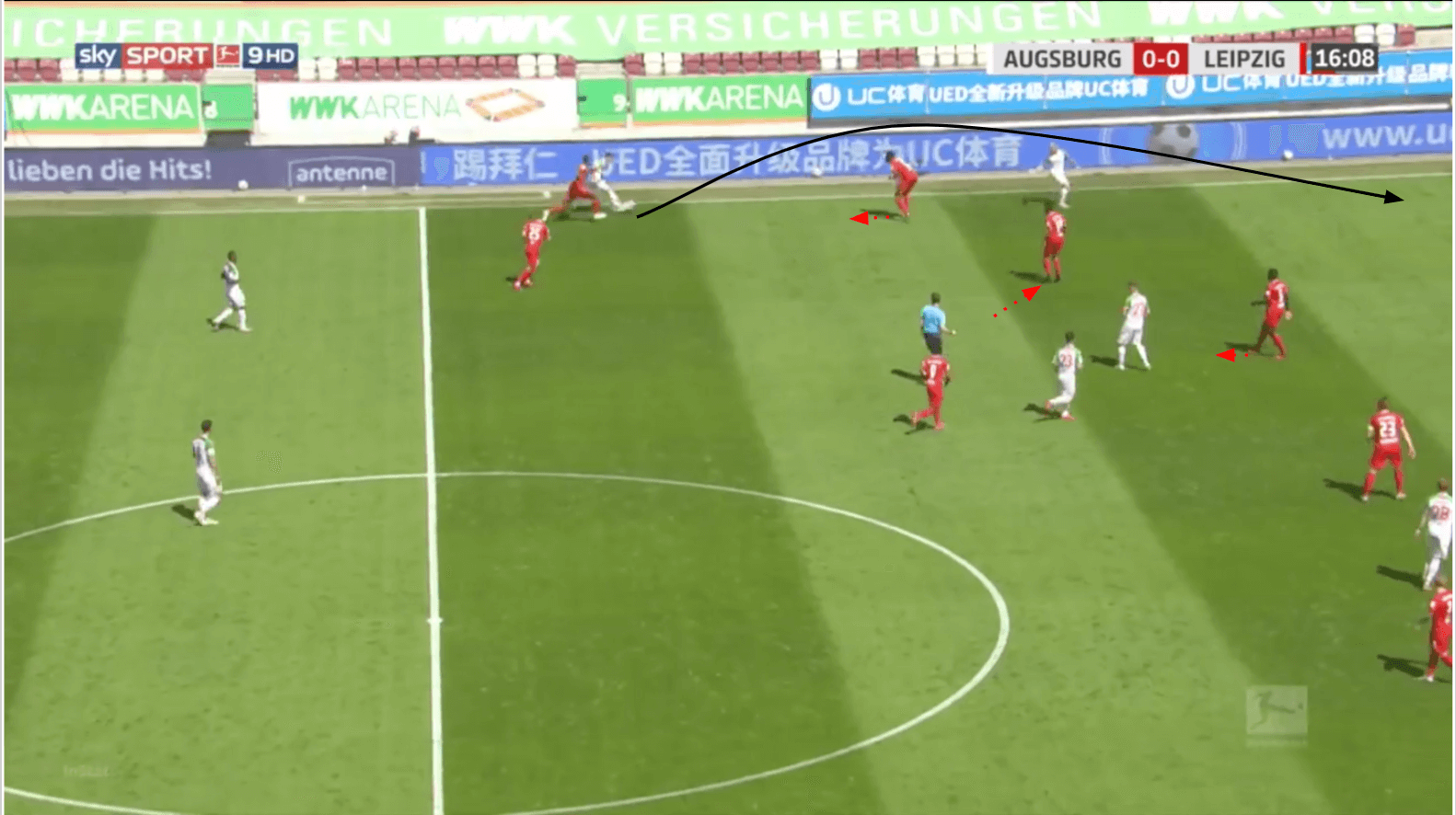 The first example of this comes from a simple aerial pass from the left side. Mukiele stepped forward in order to pressure the ball-carrier. Konaté was unsure if he needed to slide over to the right, as Tyler Adams had slid over, appearing to cover for Mukiele. Instead, Adams was actually using his covershadow to block a pass inside. This allowed Philipp Max to have an open cross in the high-assist area to the top of the penalty area, where Rani Khedira was unable to keep his shot on target despite being wide-open.

Later in the match, it became apparent that Augsburg looked to exploit Mukiele and Konaté. 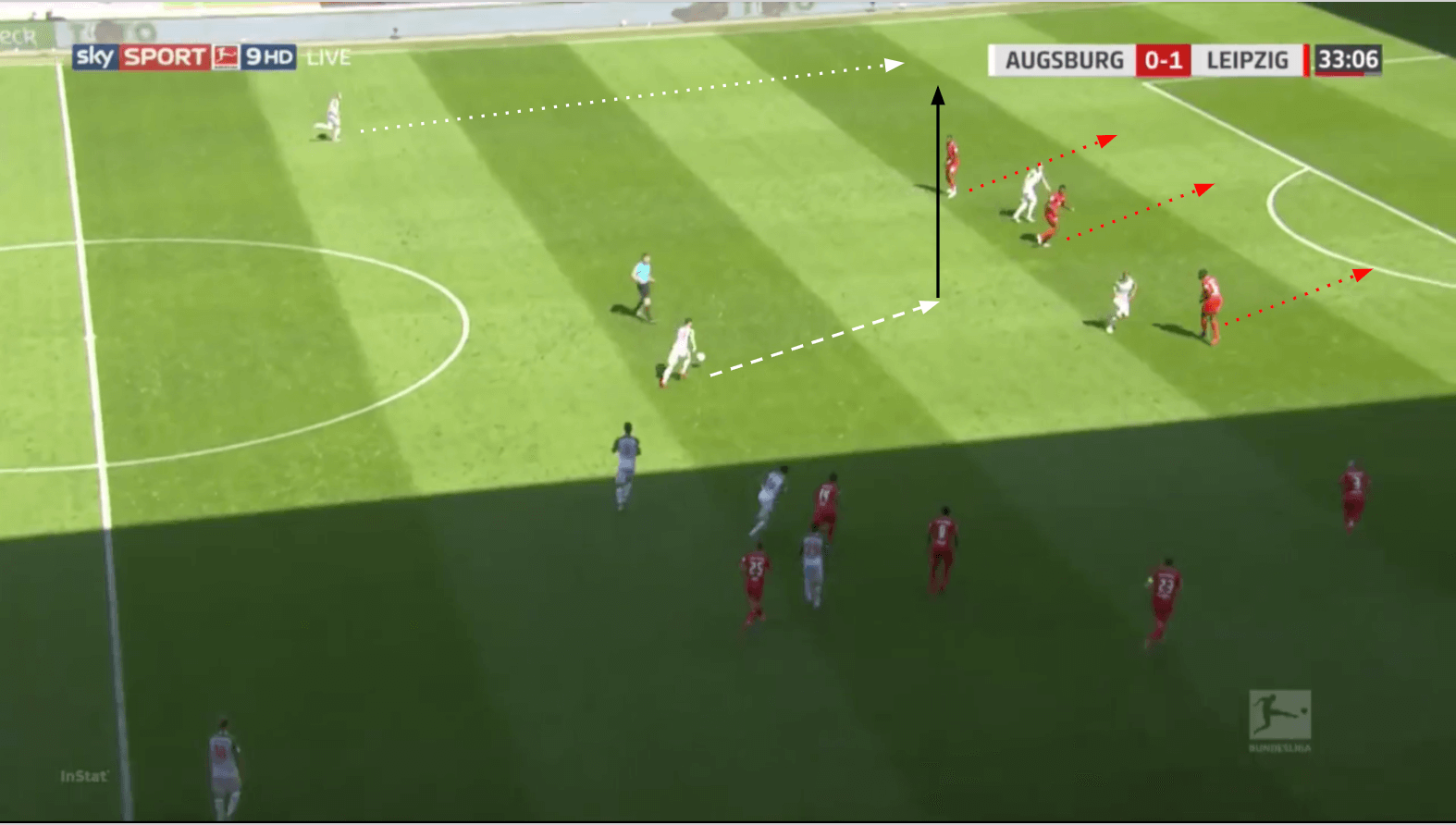 After getting Leipzig to overcommit, Augsburg played out of pressure and had the ball in the centre of the pitch, with Marco Richter dribbling at Leipzig’s backline. Instead of continuing forward, Richter laid the ball off to Max. This forced Mukiele to step out to pressure the cross. As he did, Konaté was left to defend the attackers. 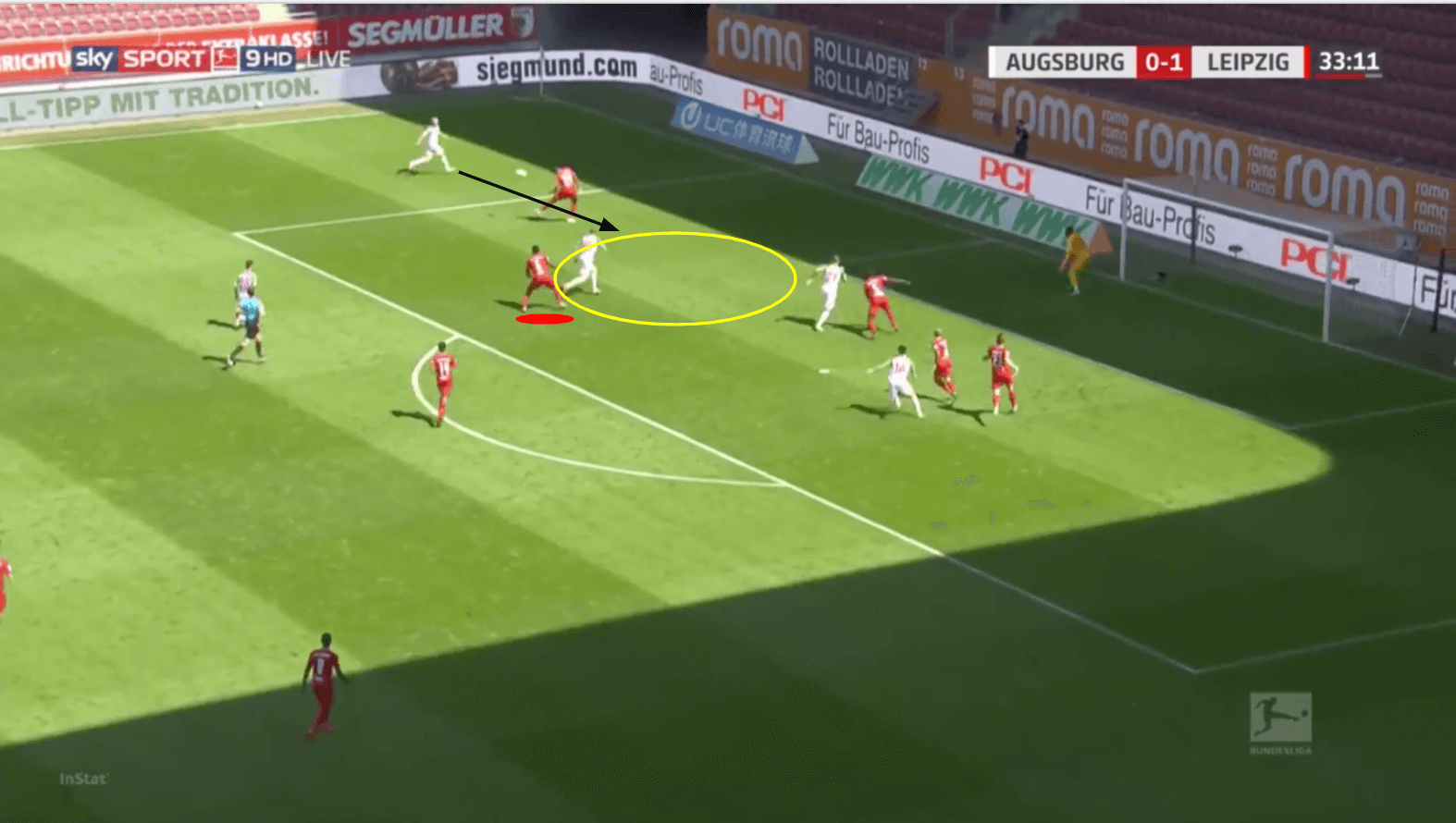 Inexplicably, Konaté did not follow his runner. This allowed for a large amount of space to open up in the box. Unfortunately for Augsburg, Max was unable to find Hahn’s feet, and the cross saw Hahn head the ball wide from close range. While he probably would have liked the ball at his feet, Hahn was still wide open because of Konaté’s error. Augsburg continued to attack these two, with their lone goal ultimately coming as a result of their persistence. 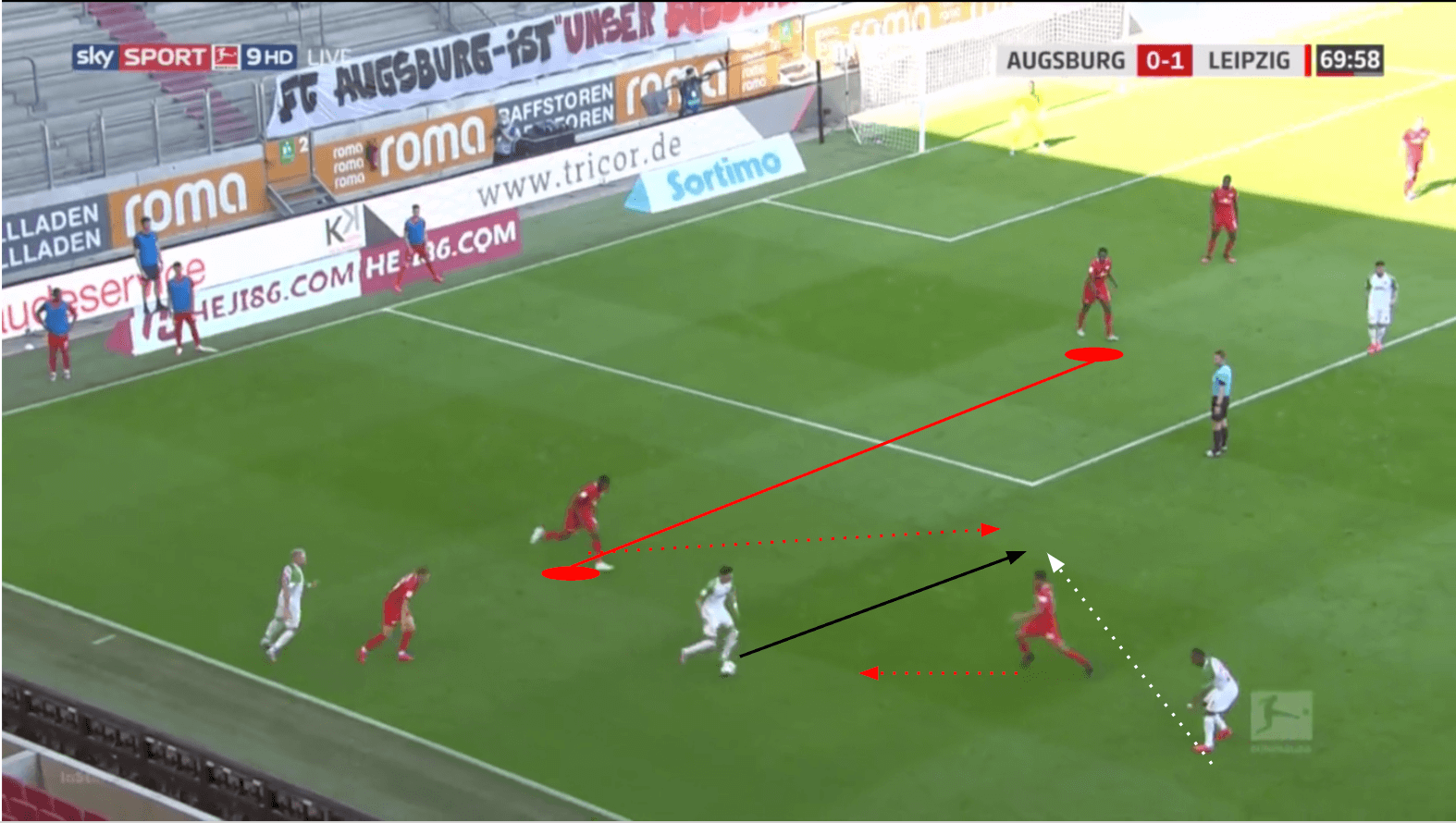 In the image above, a large space opened up between Konaté and Mukiele. Mukiele was out of position, and Augsburg looked to exploit the space. Ruben Vargas attracted the attention of Adams, who opened up more space for Vargas to play the ball into Carlos Gruezo. Mukiele had to close down Gruezo quickly as he had recognised how much room was in between him and Konaté. This led Mukiele to lunge at Gruezo, fouling him in the process. The free kick that followed saw Max hit the wall, but Vargas collected the rebound and drilled a shot from the top of the penalty area, bringing Augsburg level in the process. Despite the goal, Augsburg were not able to make the most of their attacks down the left side of the pitch (as the .19 xG suggests), and their lack of other options made them quite predictable for Leipzig.

Ultimately, RB Leipzig were able to grab the late goal with Werner’s last strike of the ball for the club. His first goal made him the club’s top scorer of all time, and his second goal sealed the victory for Leipzig and a third place finish behind Borussia Dortmund and Bundesliga champions Bayern Munich. While Leipzig still have Champions League football to play in August, they will be forced to do so without Werner.

Augsburg will look to build off of this season, which saw them finish in 15th position, just five points above the relegation playoff. The majority of their squad will remain intact with only three players set to leave; Augsburg will need to bring in a few quality players if they want to remain in the Bundesliga beyond next season.