The final matchday of the Bundesliga season saw Borussia Monchengladbach face Hertha Berlin at Borussia-Park. Marco Rose’s side needed at least a draw from the match in order to secure UEFA Champions League football for next season. While the end result did not impact Hertha Berlin’s season, they wanted to carry on their clear improvement since Bruno Labbedia’s appointment – especially after their impressive win against Bayern Leverkusen last weekend.

It was Borussia Monchengladbach domination in the first half of the match and this saw them go into the break 1-0 up; it could’ve easily been more though. Even though the second half was more even-sided, Hertha did not have much success in the final third. A second Gladbach goal in the 78th minutes looked to solidify the win, though Hertha managed to get a consolation goal in the last minutes of the game.

This tactical analysis will be looking into the tactics used by both managers. It will analyse the passive approach from Hertha, the direct transition from Gladbach, Gladbach’s overloads in defence, and also how Hertha tried to take advantage of those overloads.

Rose was missing two of his best players in Alassane Plea and Marcus Thuram, the attacking duo that contributed to 38 goals between them this season. Nevertheless, Gladbach set up in a 4-2-3-1 and still had Breel Embolo to lead the line. The Swiss striker was supported by Patrick Herrmann and ex-Borussia Dortmund player, Jonas Hofmann on the flanks and Lars Stindel in the #10. The midfield pivot included Christoph Kramer and Florian Neuhaus. In defence, from left to right, was Ramy Bensebaini, Nico Elvedi, Matthias Ginter, and Stefan Lainer; in goal, as usual, was Yann Sommer. 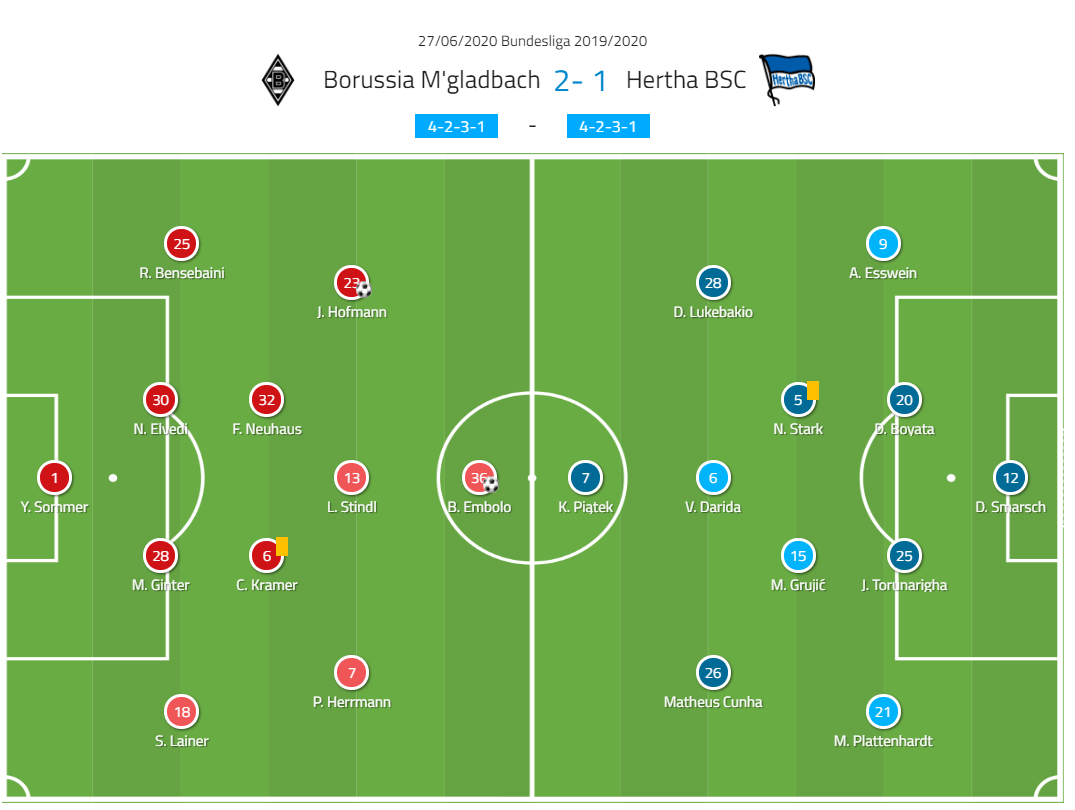 Labbadia had his side in a similar shape. Between the sticks was Dennis Smarsch, who was making his first start of the season for the club. His backline consisted of Marvin Plattenhardt, Jordan Torunarigha, Dedryck Boyata, and surprisingly, Alexander Esswein, due to injuries. Niklas Stark and Marko Grujic made up the midfield pivot, Dodi Lukebakio and Matteus Cunha operated on the flanks. The #10 position was occupied by Vladimír Darida while Krzysztof Piatek was the lone striker.

Gladbach’s build-up strategies usually consist of ball retention in the first phase, to lure the opposition in so that there can be space exploited further up the pitch. In order to attempt to stop this, Labeddia’s tactics changed from what was usual for his side – instead of a high press, Hertha barely pressed the backline of Gladbach and would only engage into a press when the ball was in the middle third of the pitch, as shown in their PPDA of just 16.5. This, however, was not a successful approach in the end. 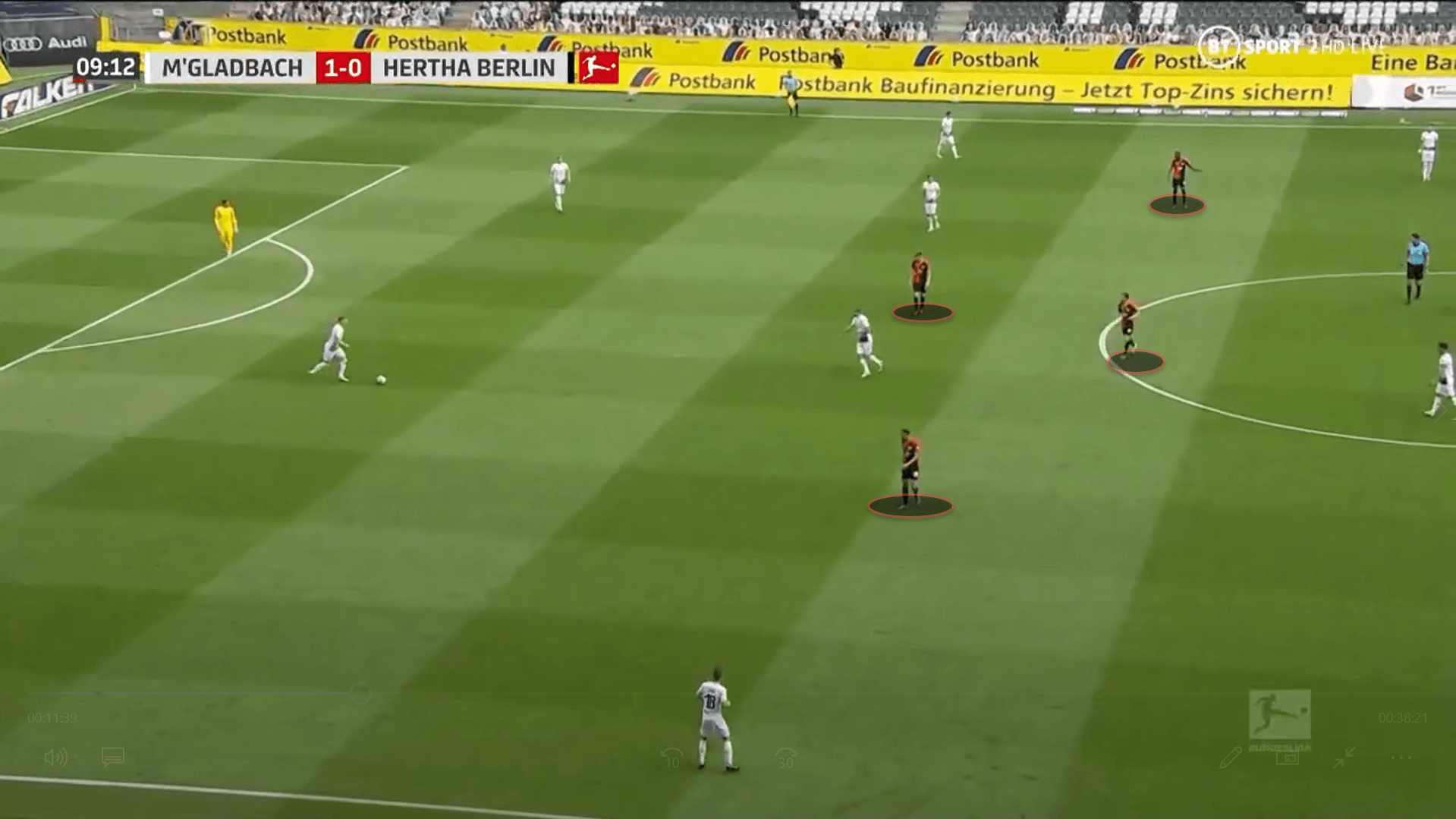 The above image shows an example of Hertha being passive and not engaging in a press on the Gladbach first line. Instead, they tried to hold a solid shape and force Gladbach to move the ball higher, though this did allow Gladbach initial domination of the ball – they averaged 59% possession in the first 30 minutes of the match. As soon as the ball made its way to Lainer in the play above, Hertha pressed and forced a mistake and they won a throw-in. However, Gladbach reacted to this tactic almost instantly. 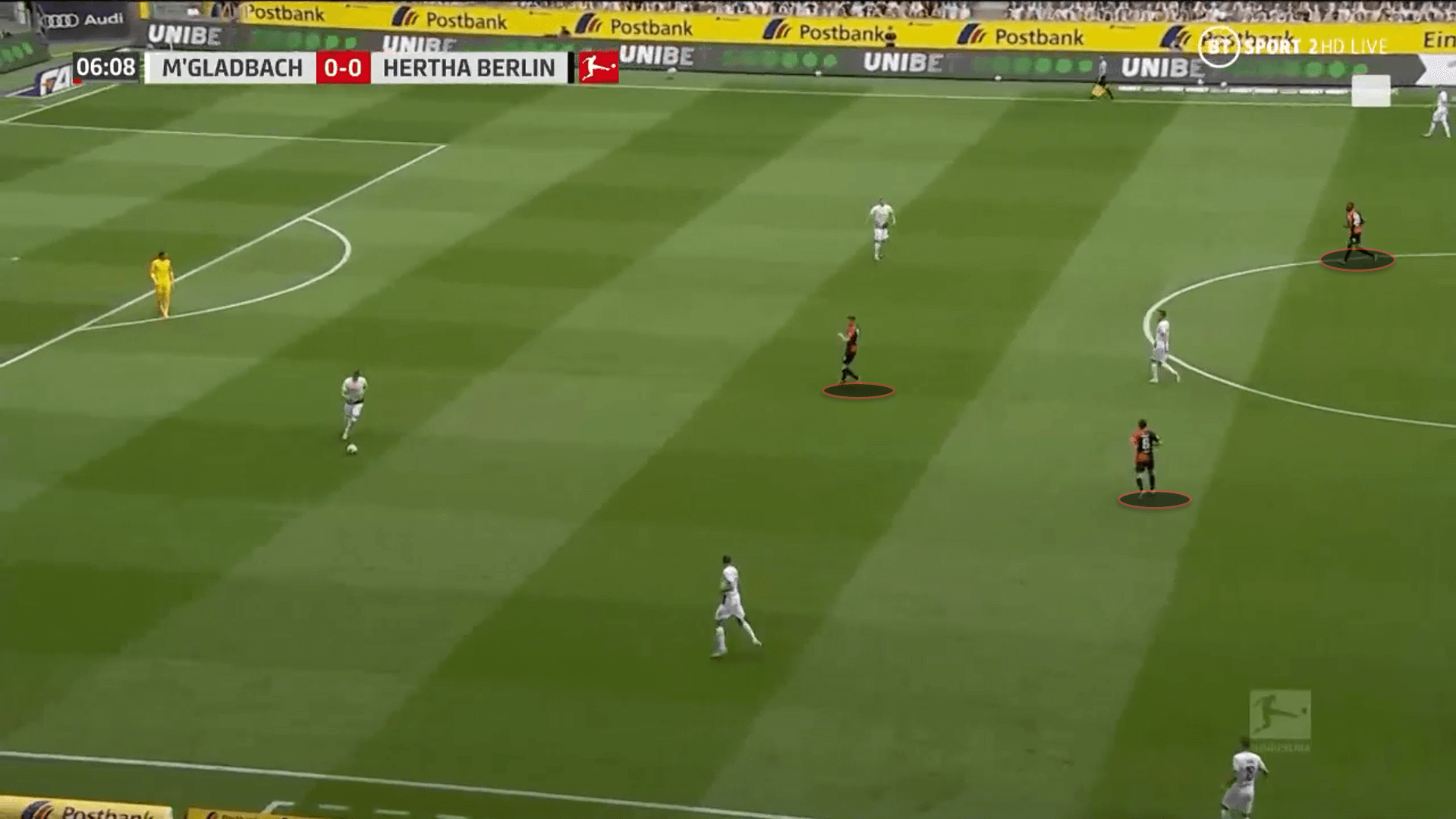 The image above shows again how Hertha weren’t pressing the Gladbach backline. However, the lack of pressure then allows Gladbach time and space to pick out their passes and they often chose the direct route due to Hertha’s tactics, I will further analyse this approach from Gladbach in the next section. The image above shows a long ball being played towards Embolo and Gladbach eventually score the opener from the play, the pass perhaps would’ve not been able to be played if there was more pressure on the Gladbach backline but then you would also be playing into their preferred way of transitioning the ball. Quite frankly, Hertha were damned if they did and damned if they didn’t.

Rose showed his tactical intelligence with the use of direct transitions in this match, with the side opting for a long ball 9.4% of the time in the game. Embolo was key in this tactical approach, using his strength to be able to win the direct balls played into him, also he ran the channels well throughout. Embolo was involved in a staggering 23 offensive duels – the most in the match, and won 43% of them. He also dragged players towards him due to his physical presence, leaving space elsewhere for his teammates to exploit.

Going back to the opening goal, Gladbach plays a direct pass in behind the Hertha defence, with Embolo making a good diagonal run. As you can see, Boyata, the Hertha right centre-back, comes across with Embolo, as the second image shows Embolo being pressed by both of the opposition centre-backs. This means that Esswein needs to move across the defensive line and this creates space for Hofmann to receive the pass in space and he is able to finish and put Gladbach in the lead. The defensive line only moves across due to the threat and strength of Embolo.

Again, we can see in the above images, the problems that Gladbach’s direct transition caused for Hertha. As the ball is fizzed into Embolo’s feet, three Hertha players abandon their positions to press him; yet he still is able to get out of the initial pressure through a nutmeg and then he releases the ball to Neuhaus who then can play a forward pass to Stindl, who is up against just one defender; with the rest of the team out of their defensive shape due to their press onto Embolo. This transitional approach worked brilliantly in the first half especially, with Gladbach unlucky to not score more than once. Their xG for the first half was a solid 1.30.

Gladbach’s use of overloads in defence

Hertha Berlin were frustrated offensively in the first half, as they managed 0.00 xG in the first 45 minutes. This was partly thanks to the overloads in Gladbach’s defensive set-up. Whichever side Hertha would try and progress the ball, Gladbach would have either a numerical overload or a positional overload in that area. The nearside winger and centre-midfielder were important in this. In the second half, Hertha managed to use this to their advantage more, yet it limited them well in the first half. 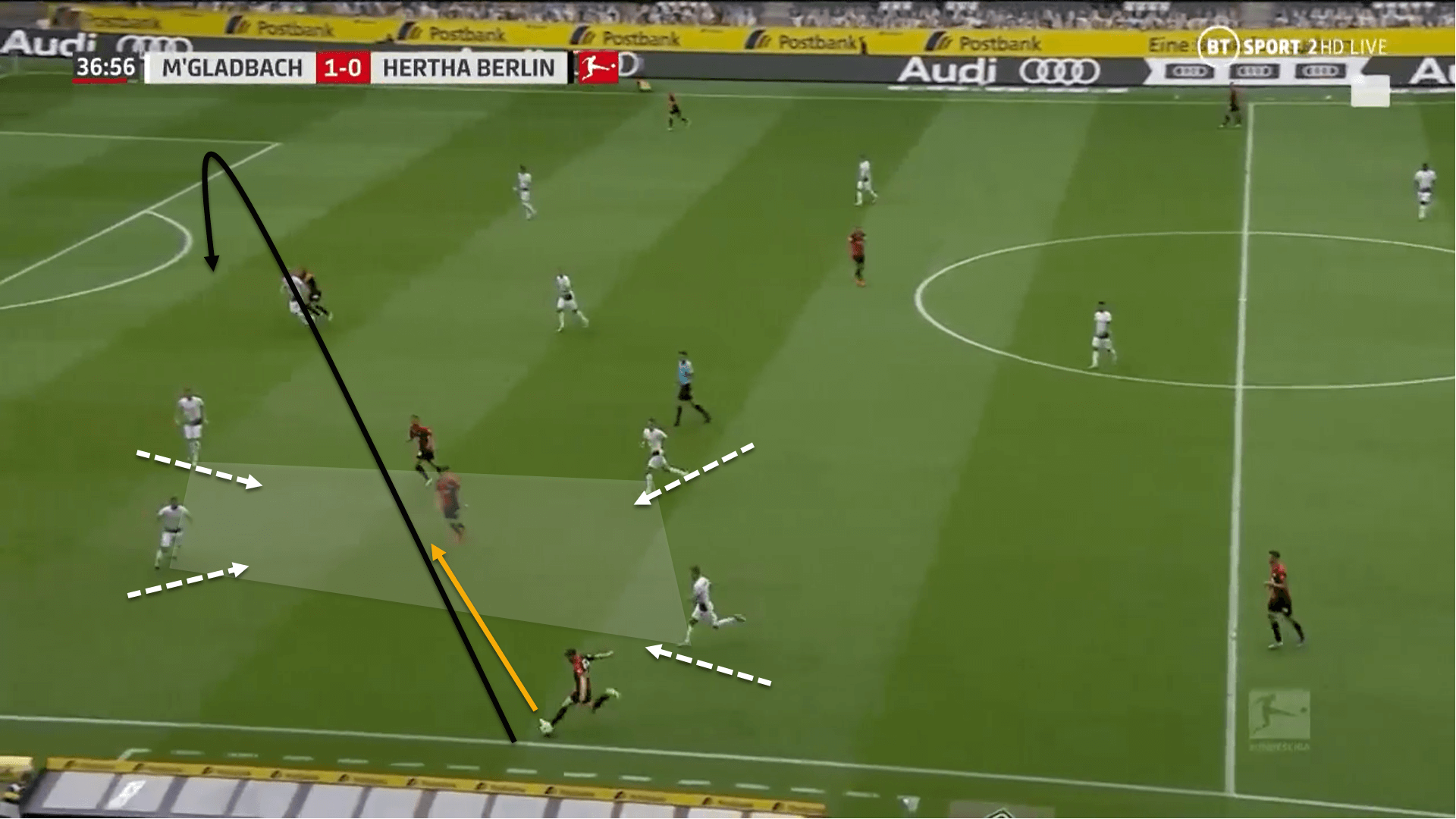 As Hertha progress through the left side in the image above, Gladbach creates a four against three overload on that side of the pitch, and the nearside centre-midfielder, Neuhaus, moves across as well, while Herrmann drops deeper. This means that instead of playing a pass inside, Plattenhardt opts for the long ball, which has an unlikely success rate and it is shown through Gladbach winning possession back. If there was no overload, Hertha could’ve progressed the ball better and utilised their players between the lines. 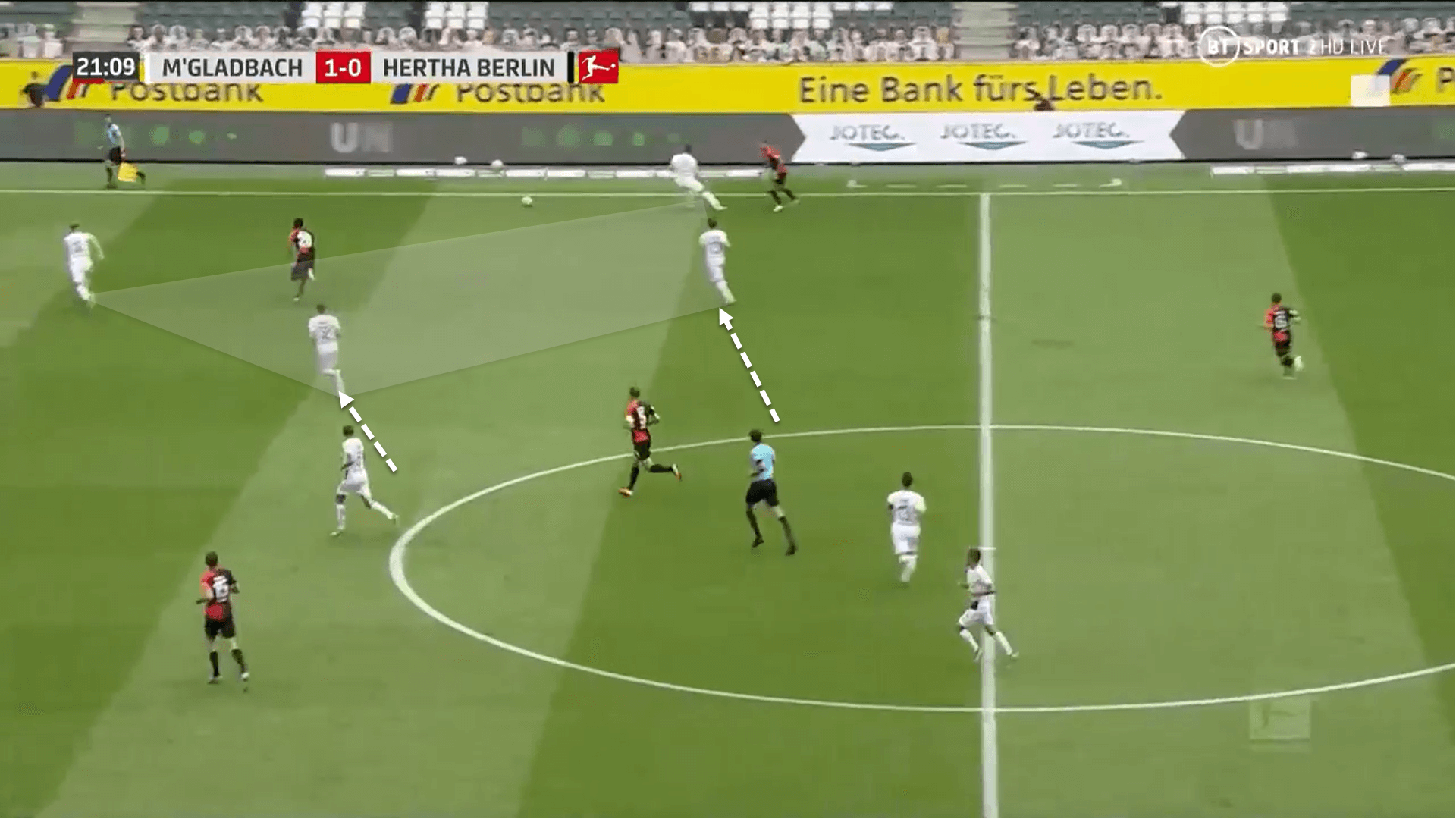 This time Hertha look to progress on their right side, but they are outnumbered four against two on that side – this is due to the movement of Neuhaus and Hofmann into the left-sided area. The use of the overload forced Hertha into an attempted through ball and it was unsuccessful. Hertha’s accuracy in their passes to the final third was just 57% in the match and the overloads that Gladbach used was partly the reasoning for this.

When Hertha were in deeper areas with the ball, central progression would be made difficult through the positional overloads Gladbach would make. 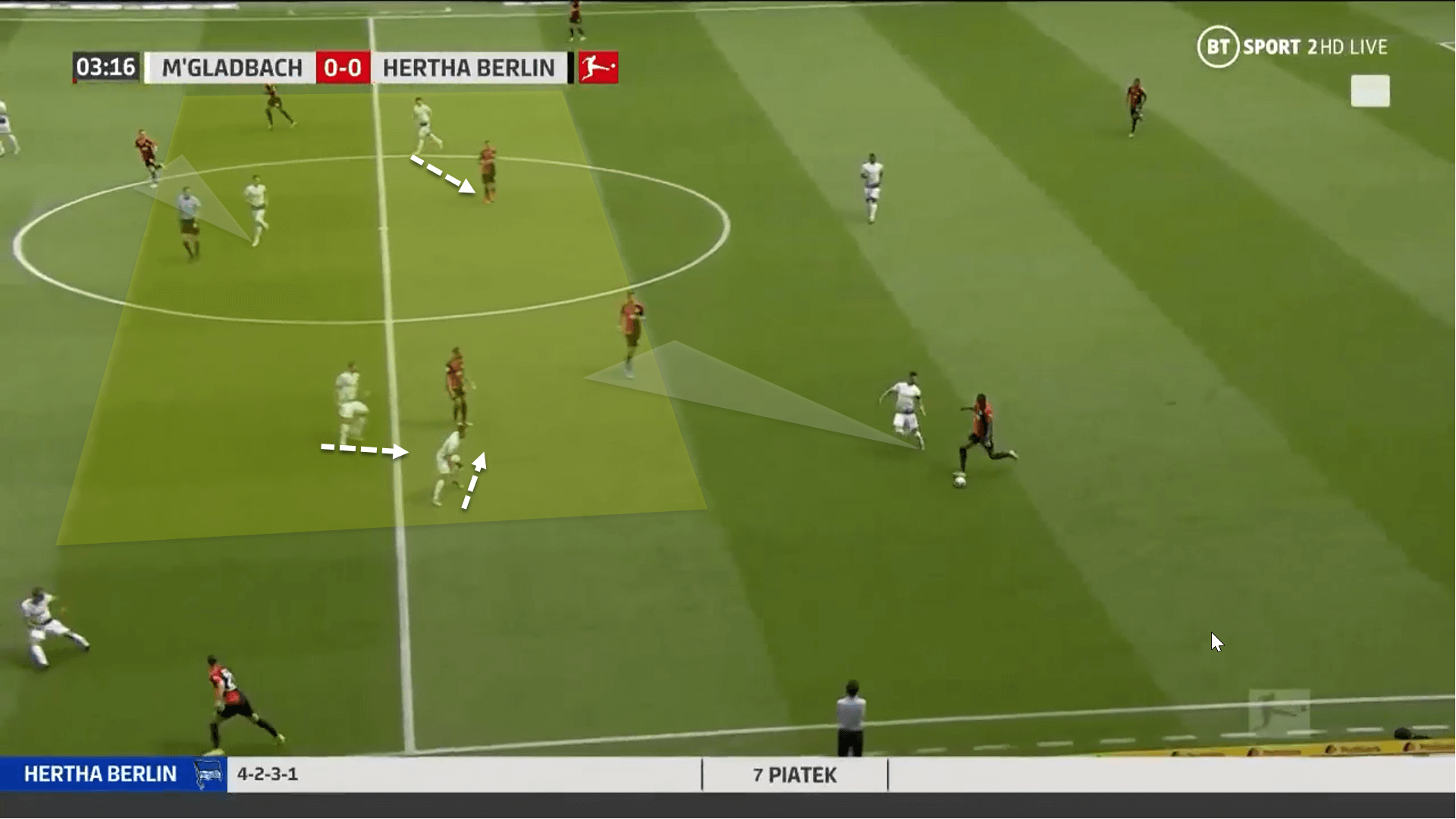 Here we can see Torunarigha attempting to progress the ball for Hertha early on in the match and central progression is made very difficult. In the centre, we can see Gladbach are actually outnumbered four to five against Hertha, yet their positions allow them to have a positional overload on the opposition.

Stindl, the player pressing Torunarigha, is also stopping a pass into Grujic by positioning himself so that the midfielder is in his cover shadow. Darida is also being occupied in Neuhaus’ cover shadow. This then allows Hermann and Kramer to both mark the obvious passing option to Cunha due to the other players being marked in their teammates’ cover shadows.

While it was a successful approach, Hertha found ways to take advantage of the defensive overloads that Gladbach used in the second half.

In order to succeed against the overloads from Gladbach, Hertha began to overload areas to isolate others. They mainly looked to try and attack the right side: 15 of their 27 attacks came from the right with almost all of their xG coming from the right too (0.69 out of 0.72), and their consolation goal came from a run on the right side.

When they would overload an area, so would Gladbach, and this then meant that their opposite-side winger would be able to attack and isolate his full-back. 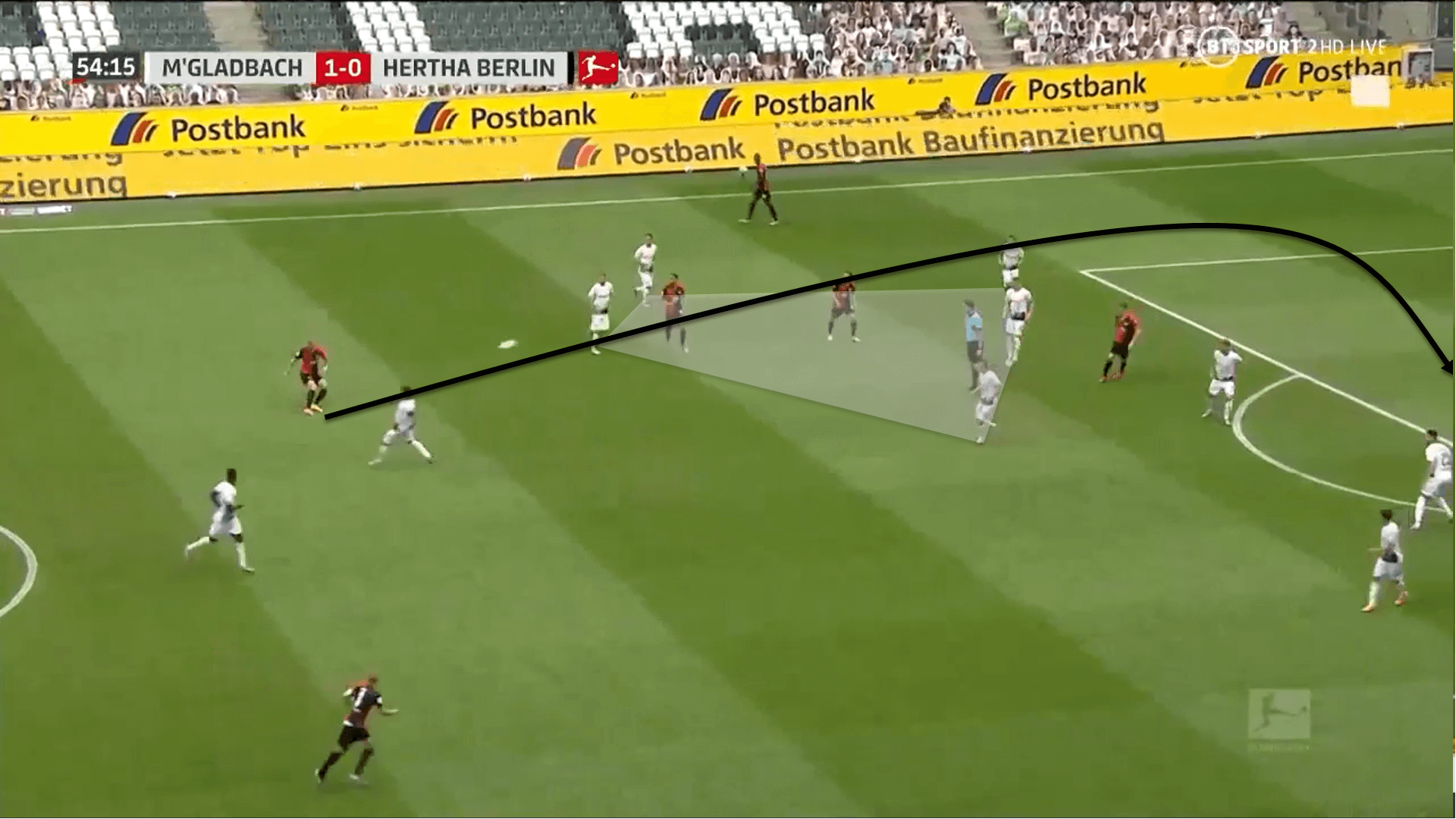 The image above shows a phase of play where Hertha attack the left side initially with three players, this prompts the overload from Gladbach with five players moving into their right side. This then pushes the entire defensive shape across to ensure compactness. Matthew Leckie then can receive the switch from Arne Maier as he is in space on the right. He shoots over the crossbar but had the chance to get his side back in the match. 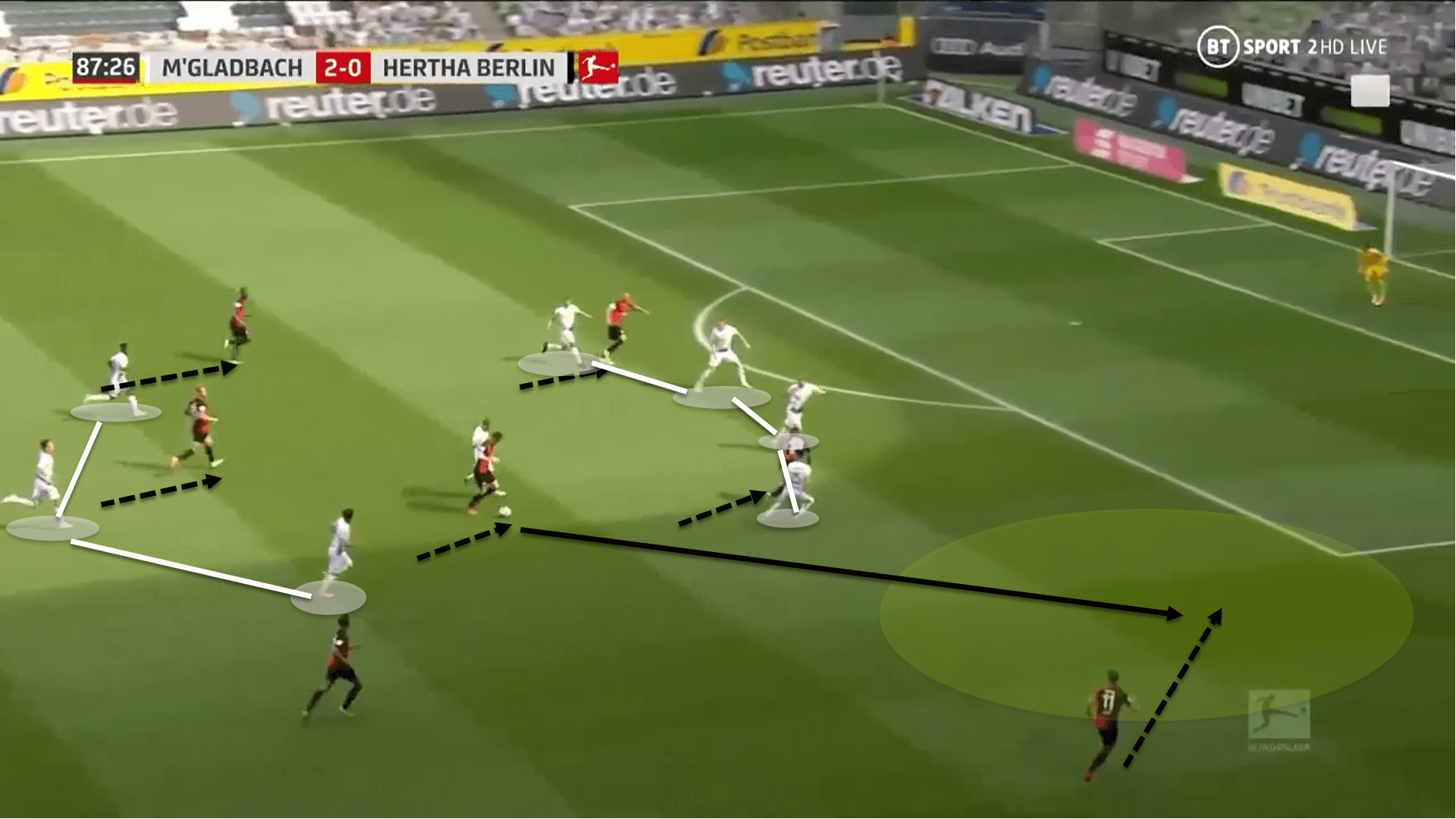 Again we can see this tactic being put into the play from Hertha, this time, they make a central overload with five players, this causes both the midfield and the defence (especially the defence) of Gladbach to move into a narrow shape to deal with the central overload. This creates great space for Leckie to receive the ball, isolate the full-back who moves out and to get a cross into the area. Unfortunately, it did not find a teammate.

Even though this tactic created opportunities for Hertha, their quality was not good enough on the day to make anything from the chances.

Gladbach secured the win after an impressive routine from a corner in the 78th minute, yet they did dominate the large majority of the match and shut out Hertha for almost the entire match. Despite this, Hertha’s quality was still not shown in the final third when they had the opportunity until the last minute of the match.

This analysis has shown the tactics used by both managers and how they altered their tactics throughout the match. Even though Labbedia’s side lost the match, they look to be in better shape for the upcoming season since his appointment. Meanwhile, Gladbach have been able to secure UEFA Champions League qualification in Rose’s first season in charge and for the first time since 2015/16.