Liverpool smashed Arsenal 5-1 in their last game of the 2018 and made the world believe that they could win the Premier League title. The team is still unbeaten in the league and sits on top of the table with 54 points, seven more than Manchester City. On the other side, the Arsenal looked desperate at the back and couldn’t react to the perfectly structured 4-2-3-1 Liverpool formation.

The team should be in a rush to strengthen their defensive line with a new addition during the winter transfer window. No improvement could be seen in their defensive actions since the start of the season and that raised a lot of questions whether Unai Emery has a real plan on how to do it. The manager went out with a 3-4-2-1 formation, and bearing in mind Arsenal‘s usual problems during defensive transitions it is not of a surprise they allowed a comeback.

Another thing on the agenda is that Aaron Ramsey, one of the few players that tried to find any gap in Liverpool’s structure, might be leaving in January. This would definitely have its say on their performance till the end of the season.

Was going out with a back-three against Liverpool‘s frightening attack a mistake or were they were just too good to handle?

Unai Emery had the courage to start with a three-man defence in a 3-4-2-1 formation. Anyone who has seen Liverpool’s attacking trio – or this time quartet – and Arsenal’s transition issues, would see the trouble since the beginning. Having Lichtsteiner, Sokratis and Mustafi in your back three against players with such pace as Salah, Mane, Firmino and Shaqiri could not be the best approach to this game. 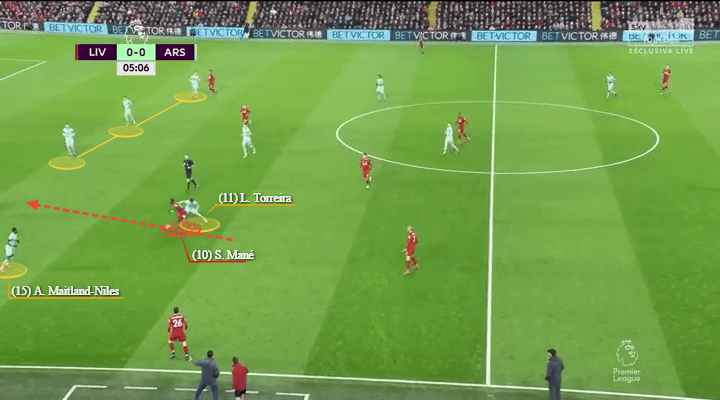 The central midfielders Torreira and Xhaka couldn’t react properly to Mane, Firmino and Shaqiri dropping back, closing spaces and helping with the build-up. The wing-backs, in this case Maitland-Niles, didn’t bring the needed support in more central areas. Most of the times that resulted in considerable gaps which Sadio Mane could exploit using his speed and the fact that Arsenal‘s defence was positioned a bit high in these situations. 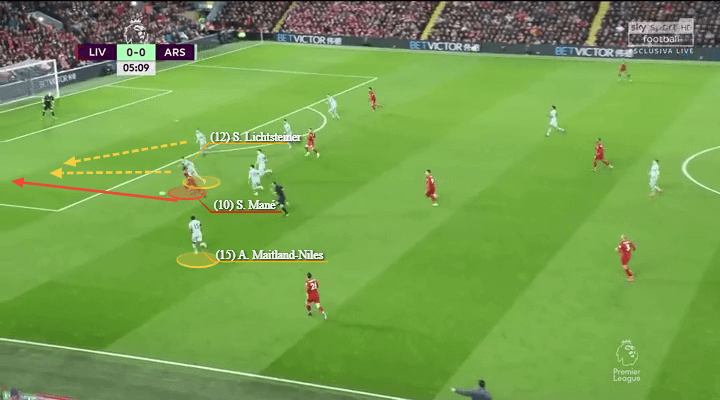 From there, the lack of perfect timing in the Gunners’ back-line resulted in the team conceding goal-scoring opportunities. These rotations of Liverpool in possession turned out to be crucial for their build-up. 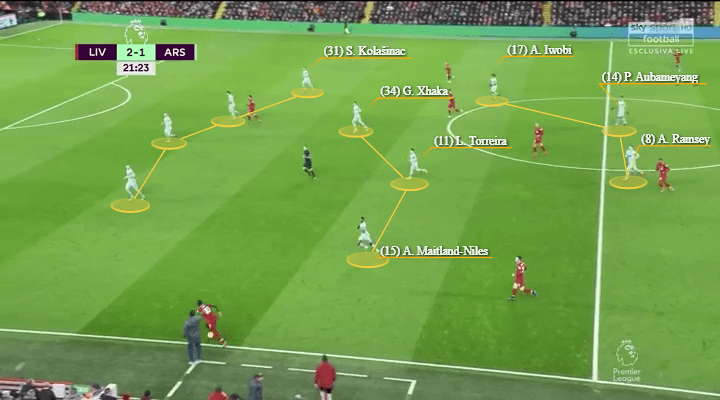 Unai Emery quickly realised that this scheme wouldn’t work out and switched to four-man defence early in the first half. Kolasinac supported the back-line while Xhaka, Torreira and Maitland-Niles formed the midfield for more of a 4-3-2-1 formation.

The team was already 2-1 down and it didn’t help a lot with the team continually switching from one formation to another. Liverpool used Fabinho’s tactical discipline and ball control to dominate the midfield and distribute possession. Meanwhile, Wijnaldum took care of making the offensive transition easier. The connection between the lines would be crucial for closing the spaces and not allowing their opponents to operate in them.

Liverpool’s pace was the biggest struggle for Arsenal as they couldn’t position well enough or for long enough. The Reds often used one-touch combinations that would tear their markers apart and create spaces. Switching to 4-4-2 when out of possession helped Liverpool press the Londoners in their early build-up and got them stuck in the midfield area.

This happened thanks to Roberto Firmino’s perfectly measured off-the-ball movements, supporting his teammates all over the middle and final thirds. 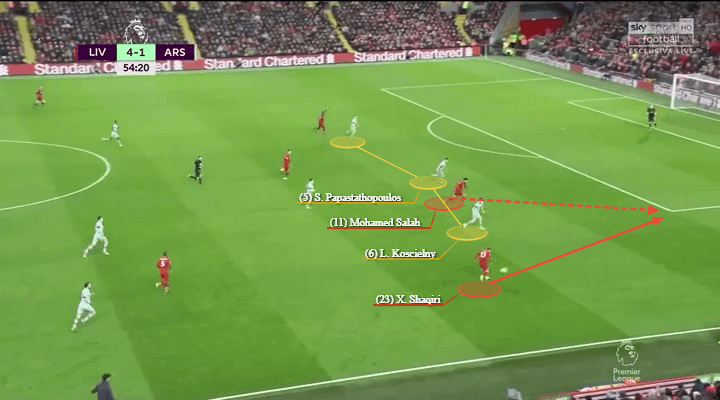 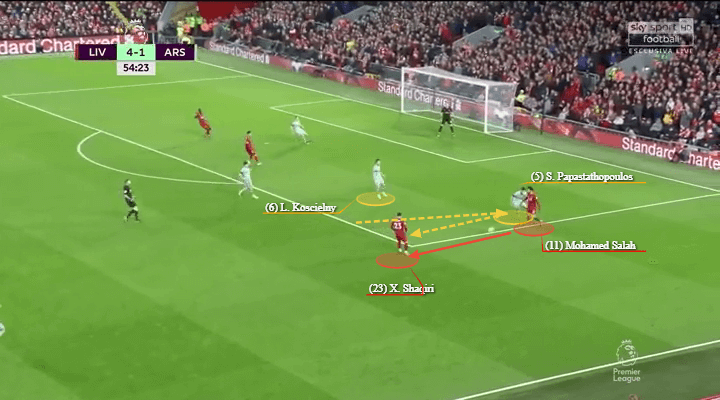 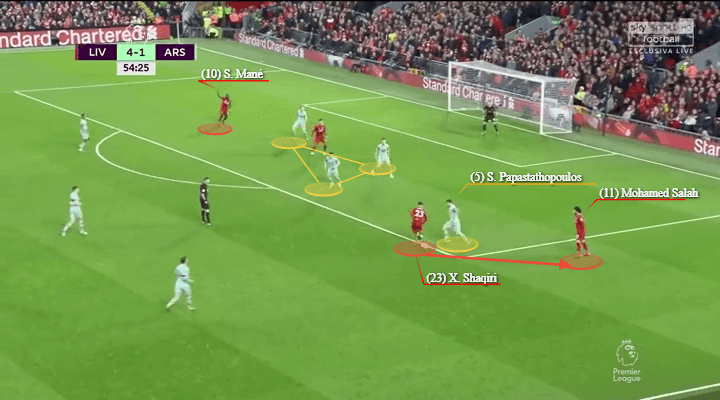 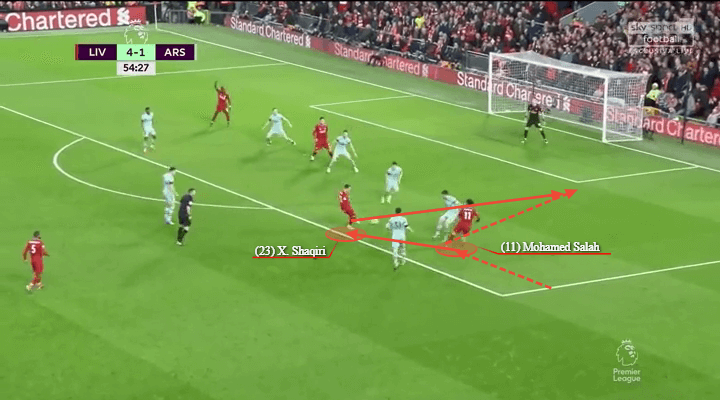 Arsenal’s back three couldn’t cover the wide areas which opened space for Shaqiri who would make runs and support Salah. A series of one-touch combinations between the two would leave the defenders confused. Here the main mistake was that while trying to cover Firmino in a triangle, the team left both sides uncovered as Sokratis had to deal with both Shaqiri and Salah. Of course, this didn’t work out as Salah moved off the ball to receive it deeper in the box.

The same happened on a few occasions. As I’ve mentioned in my previous analysis one of the biggest Arsenal mistakes is not putting enough pressure on the opponents’ players in the final stage of their attack. In the next picture, Iwobi should’ve applied at least a pressing duel to Fabinho in order to stop his pass towards Salah. 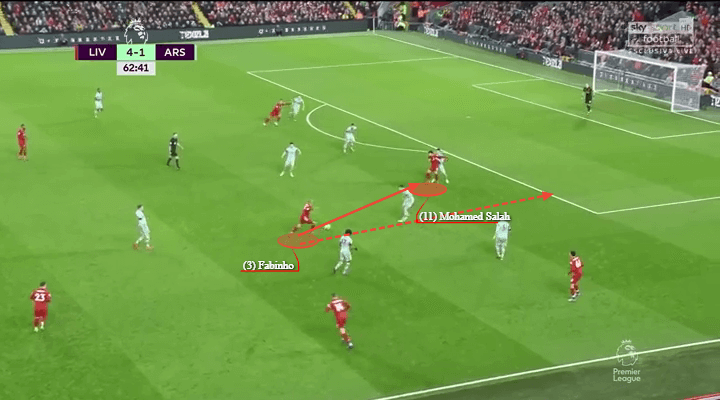 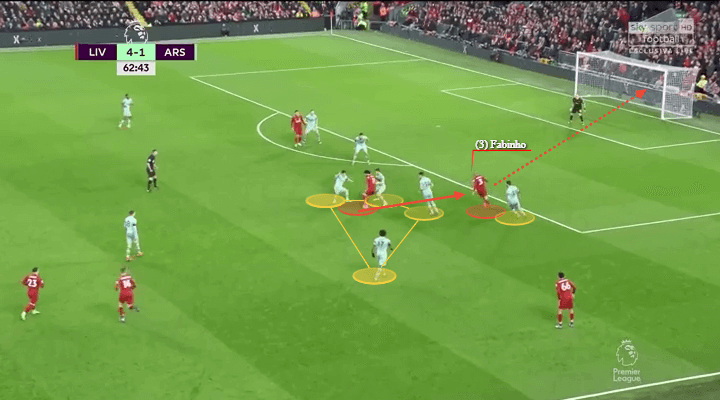 While three players were covering Salah, Iwobi should’ve supported Sokratis in marking Fabinho. Instead of that, the Greek applied a non-effective pressing duel and that resulted in Fabinho sneaking and shooting.

Arsenal losing the ball in the final third has been the reason for most of the frustration. It has been an issue for a while and it happened again against Liverpool. Once they lost the ball they were caught on a counter-attack they could not prevent. 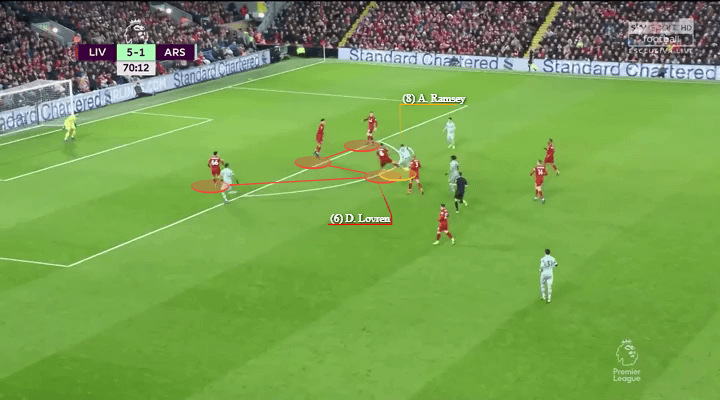 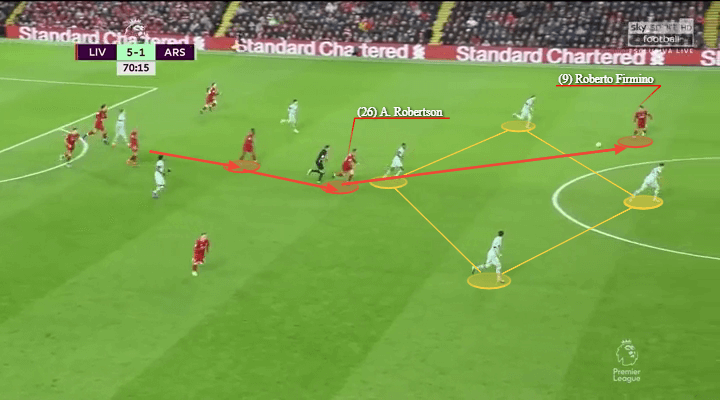 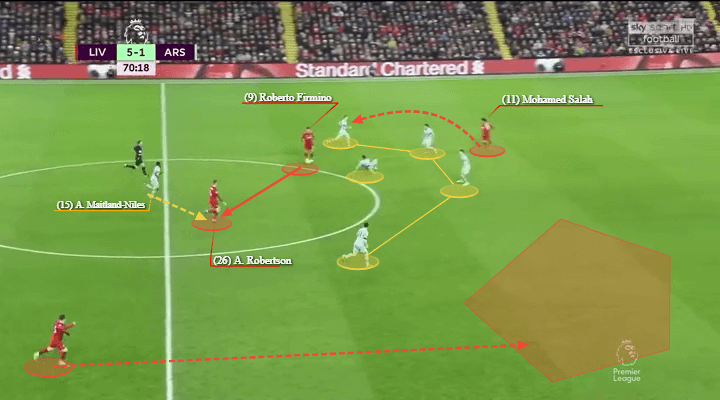 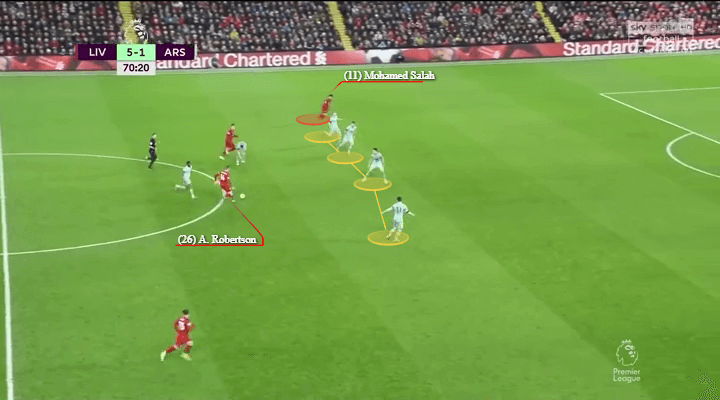 Here the four-man defence was so compressed to cover Robertson and Firminho, that they left plenty of space in the wide areas for Shaqiri and Salah to operate in.

Unai Emery didn’t include Alex Lacazette in his starting XI which might have been a mistake. Ramsey and Iwobi failed to deliver to Aubameyang and the connection was missing. Having Lacazette next to the Gabonese would’ve helped with the build up as his ball control is crucial in the final third. Instead of playing them alongside each other, the manager decided to just replace Aubameyang with the Frenchman which didn’t change the team’s approach to the game a lot.

The most effective players throughout the game were Ramsey, Iwobi and Maitland-Niles. Although they failed to deliver to Aubameyang, hey created some chances on their own. Maitland-Niles opened the scoring early on thanks to an individual mistake of Fabinho. The Brazilian failed to put pressure on Iwobi, who assisted the opening goal. 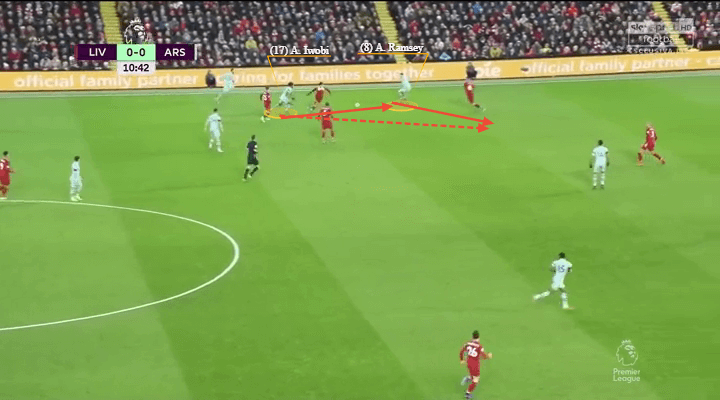 Ramsey would often switch positions and support Iwobi on the left. That is how a good one-touch combination between them ended up with Arsenal scoring. 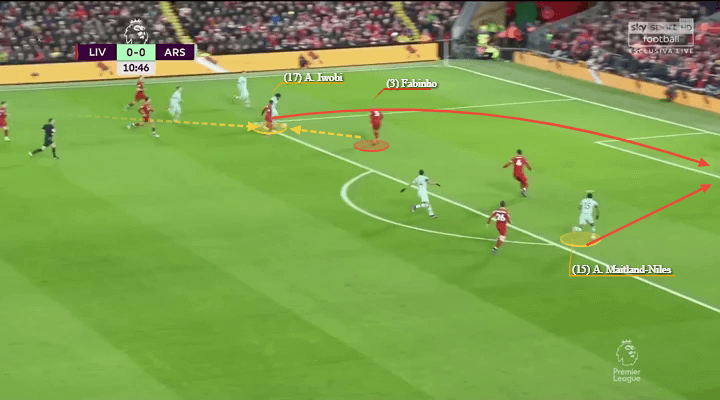 Iwobi used his control to reach the edge of the box. In this case, most of Liverpool’s defence was concentrated on the Ramsey-Iwobi partnership. Virgil van Dijk and Andy Robertson had to man-mark Aubameyang and didn’t notice the uncovered Maitland-Niles who used the free space to convert the well-executed cross from Iwobi. 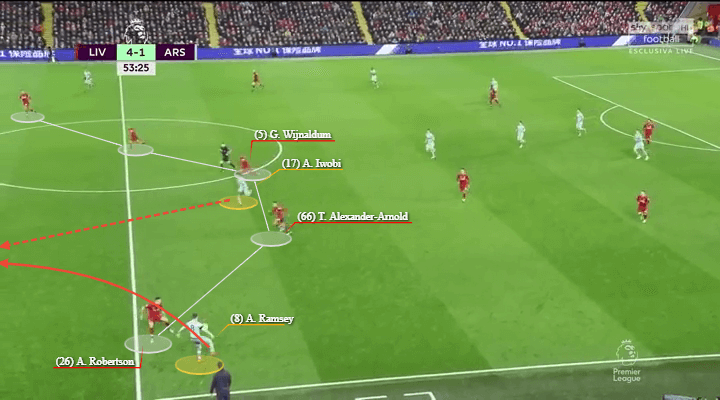 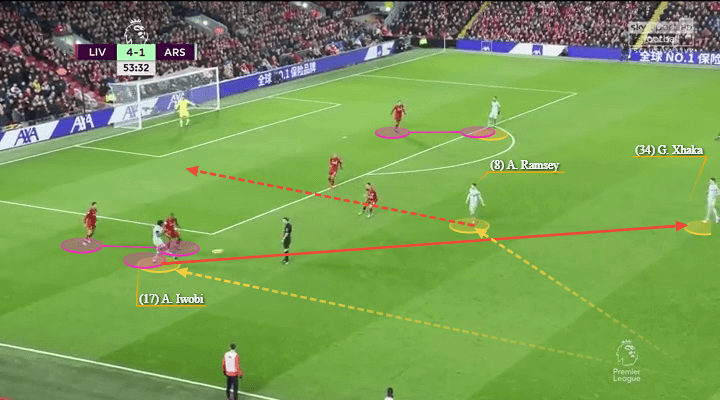 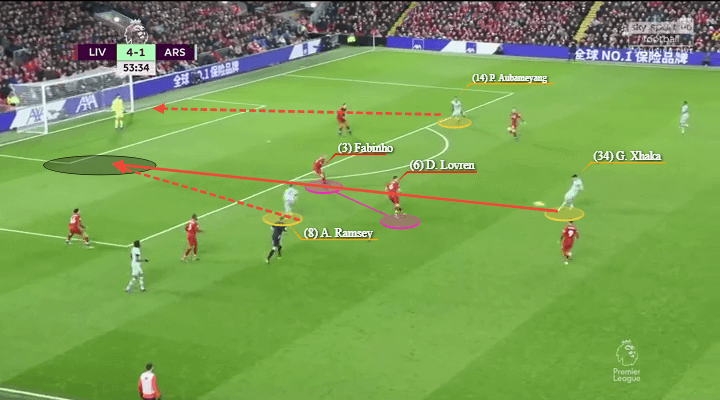 Probably the biggest chance for Arsenal in this game was in the 53rd minute. Wijnaldum joined the back-line in order to stop Iwobi from receiving the ball. This left Fabinho and Lovren take care of Ramsey. Once Xhaka’s link-up-play took place they focused on covering him, realising how he often shoots from long distance. That left a huge gap for Ramsey in the box, who eventually received a pass from Xhaka just to supply Aubameyang who had moved off the ball.

Arsenal’s defensive issues are breaking the team up. Going out with a back-three against teams with a high press and pace is not helping out. The manager quickly needs to find a solution for their struggles and perhaps stick to one formation for a longer period of time. Otherwise switching players in the starting XI combined with a more clearly defined style of play might turn out to be the stepping stone for their improvement.