After a successful season under Cuca, Atlético Mineiro have turned to manager Antonio ‘El Turco’ Mohamed. Cuca resigned after winning the league and the cup in 2021. Over the past two seasons, Atlético have built one of the strongest squads in the continent with the likes of Hulk, Godín, Vargas, Nacho Fernández, Zaracho, and many more. They have also successfully implemented one of the country’s leading data and analysis departments. Atlético have caught up to Flamengo and Palmeiras and are now one of the strongest clubs in South America. As they go into the 2022 season under El Turco, they will be looking to challenge for every competition. They certainly have the depth and quality to do so.

Antonio Mohamed is an experienced manager with spells in Argentina and Mexico. In his first six matches in charge, he has won four, tied one, and lost one. It is still early days in his tenure, but his tactics are becoming clear. In this tactical analysis, we will examine key characteristics of Antonio Mohamed’s tactics so far at Atlético Mineiro.

As the season has just started, Mohamed is still constantly rotating and getting to know his players. Consequently, the line-ups have not been of much importance, however, the formations used have. They highlight not only the organisational structure Mohamed desires but the style of play he is looking to implement. The image below displays how often each formation has been used along with key statistics. 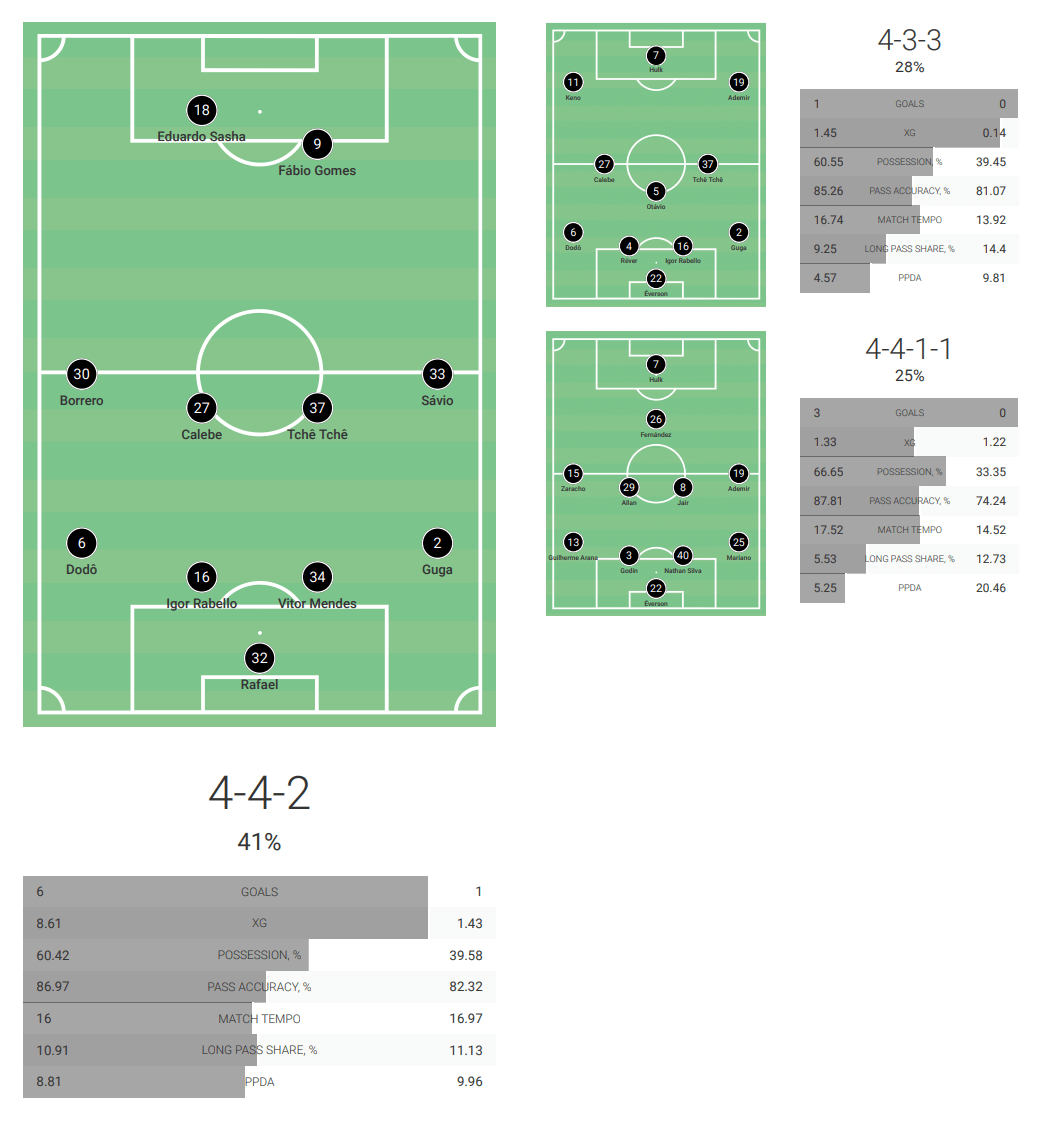 The 4-4-2 has been the most frequently used one, but he has also experimented with a 4-3-3 and a 4-4-1-1. Regardless of the formation, Mohamed has different variations for his attacking organisation, which will heavily depend on the players involved. Fullbacks like Arana and Guga will look to get more involved in the attack, whereas Dodo and Mariano will be slightly more defensive. Atlético also have great depth in the midfield, all with varying strengths. This will consequently require a lot of flexibility in the way they structure themselves offensively. The same position may have different roles depending on the player currently playing. It is worth taking a look at a few of these variations.

Atlético have a very deep squad with a lot of different strengths. Players are better in certain spaces and perform different roles. Some may look to get involved in possession and create on the ball. Others may look to attack spaces and work off the ball. At any rate, Mohamed must accommodate these various talents. As we have seen above, he is a big fan of the 4-4-2. This is a fairly simple structure, which often maintains itself in the attack. He will usually deploy a more playmaking midfielder, who will look to get on the ball and play closer to the defensive line. In one of the matches, this role was performed by Calebe. The other midfielder will be key in working box-to-box and getting involved in the attack. As Mohamed likes to play very direct football, this is highly effective. In the instance below, the 4-2 structure can be observed. With a double pivot and the fullbacks deeper, Atlético attempt to enter the opposition half. 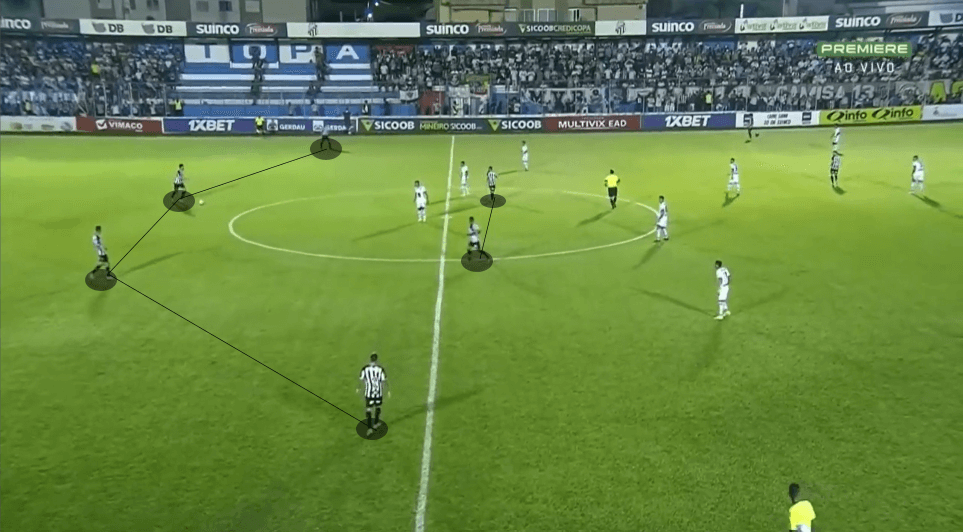 As they progress through the zones, the fullbacks will look to join the attack and create wide overloads. As a consequence, their structure nearly turns into a 2-2-6. Mohamed likes to attack through the wings, and this organisation provides the structure to do just that. 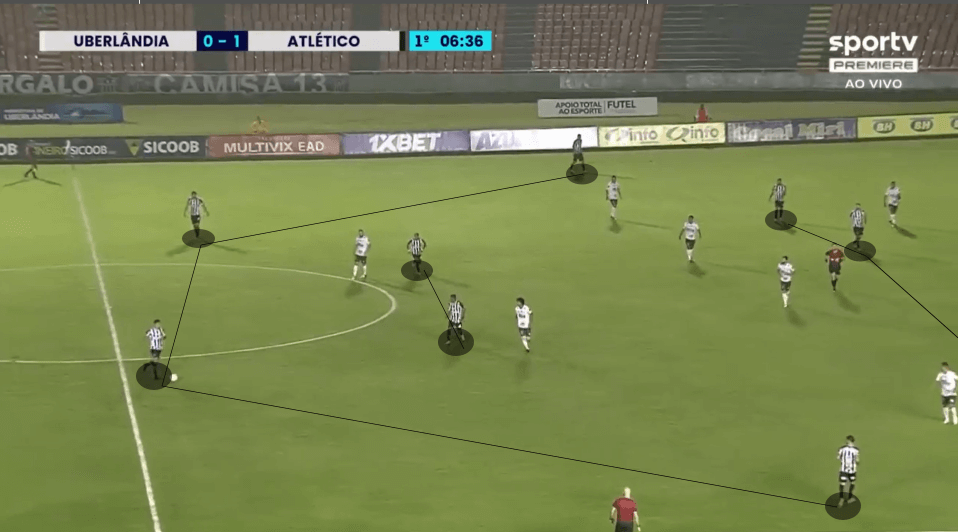 Another common variation seen in these first few matches has been the first line of three. This can be made up in many ways, but the most common is with the left-back pushing up and the right-back tucking in. Arana is a very dangerous attacking left-back, with two goals in the last five matches. This structure gives him more liberty going forward and is usually done with a ‘false winger’. This false winger will usually be Nacho or Zaracho, both originally midfielders who will drift inside and allow Arana to fill the wide channel. Below is an example of this structure against America. Notice how wide and high Arana is on the left wing. 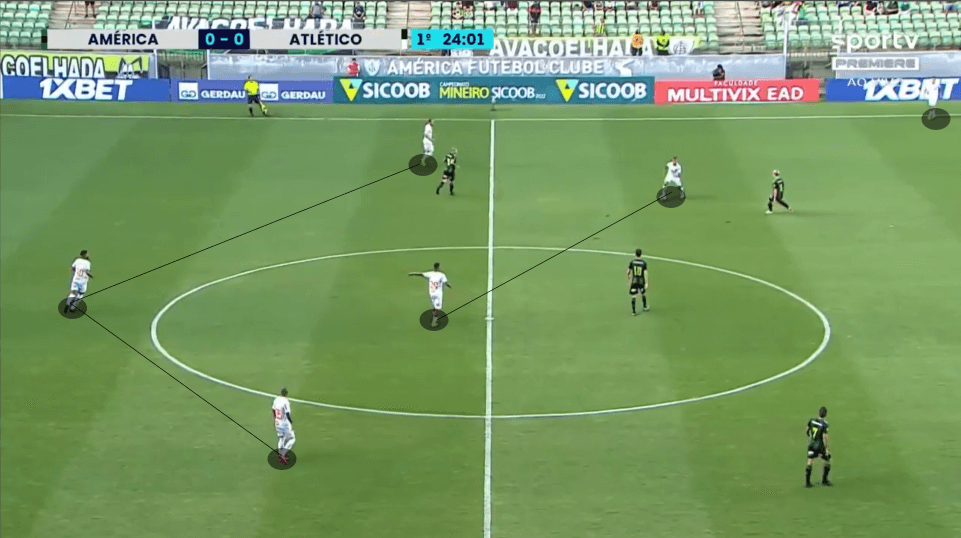 In all of these structures, but more specifically in this back three, Atlético has a rotating attack. This essentially means players aren’t stuck to one role or position, but rather are constantly occupying different places and switching positions. Nacho and Zaracho are key players in this and are often the heart of the midfield. Hulk is essentially a false nine who will also get involved in possession. In summary, Atlético play very free-flowing attacking football. 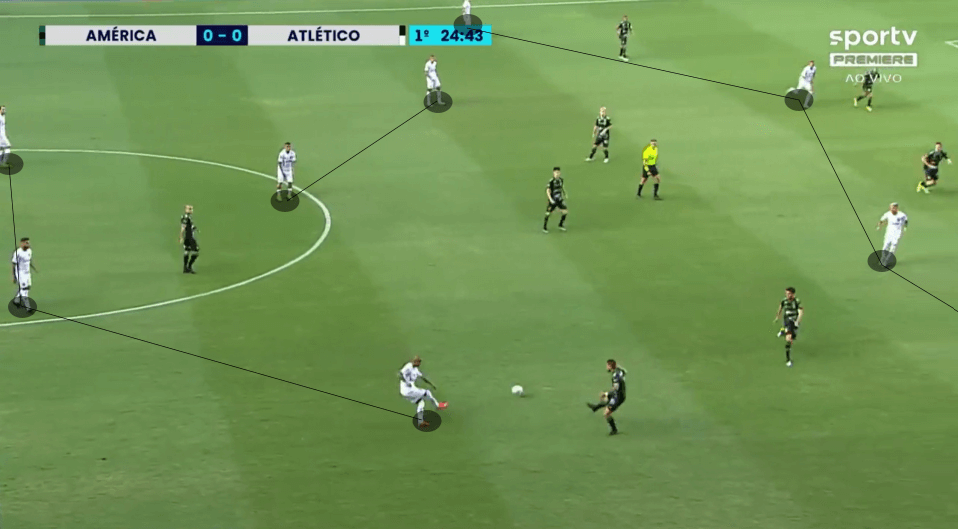 Regardless of the organisational structure, Mohamed’s side constantly look to play direct football. They average a large number of lateral passes, at 207.71 per 90. However, they also average 159.43 forward passes per 90. Playing against weaker opposition, they have a lot of possession amongst the centre-backs. As they look to progress through the zones, they opt to go for longer and more direct passes. They are one of the leading teams in both progressive passes per 90 (78.43) and long passes per 90 (45.43) in the Campeonato Mineiro. This directness can be illustrated by Vitor Mendes’ passing map in one of the matches. 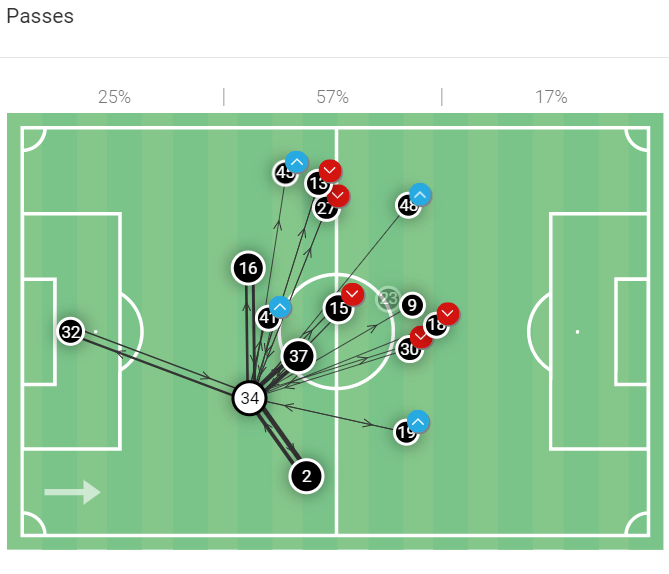 With a very strong centre-forward like Hulk, Atlético try to find him long as he holds the ball up and combines with other players well. He is a very good outlet in the build-up and a good option in the final third. In addition to his strength, he is very fast. He is able to get in behind and attack spaces with great danger. In the instance below, Atlético look to build out of the back with America’s high pressure. They go long, breaking two lines of pressure, to Hulk who is able to hold the ball up and play with the other attackers. 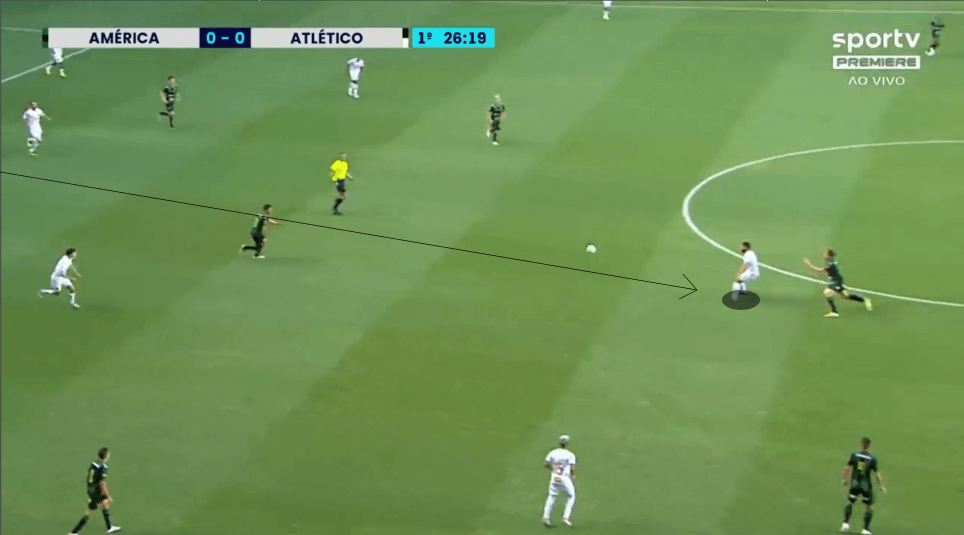 In addition to Hulk, Atlético have very pacey and dangerous attackers. With good ball-playing defenders, they are constantly looking to find space behind and playing the long ball. 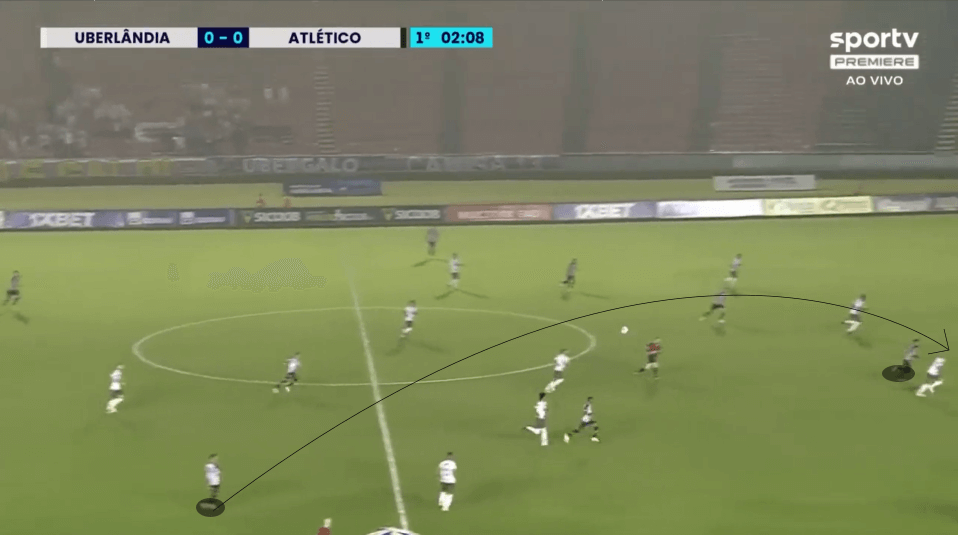 The 4-4-2 with two centre-forwards also allow them to coordinate their runs. In a very traditional strategy, one will serve as the target man while the others attack the space behind for a flick-on. This is done below against URT. 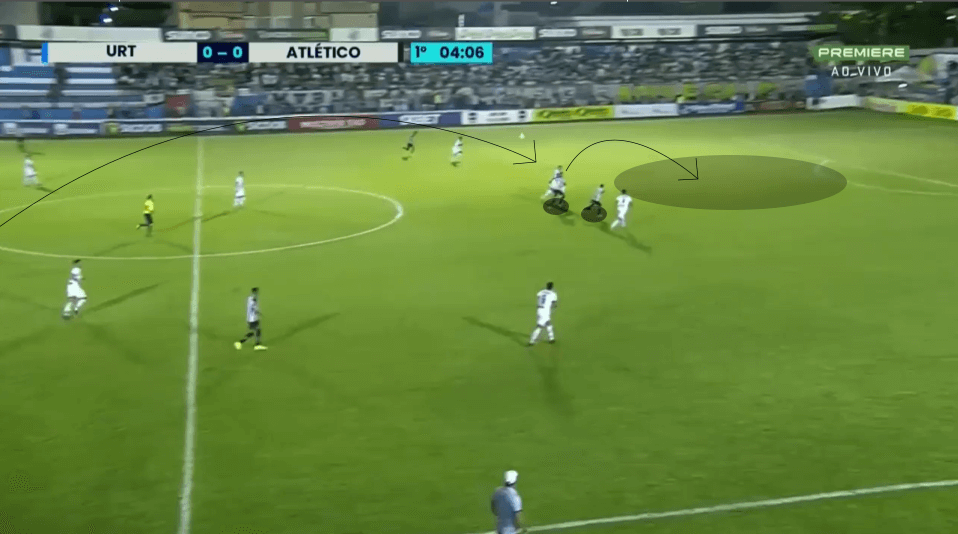 Direct football has been a constant in Mohamed’s teams, but it may not be the most effective strategy at times. Especially against weaker oppositions, Atlético will struggle to create quality chances with a lack of midfield and patient possession. This was most notable against URT, as they had 72.26% of possession, but an xG of 0.76. They consequently lost the match 1-0 despite the huge difference in quality.

Attacking through the wings

Another common approach in Mohamed’s early days at Atlético has been the wide play. With attacking fullbacks and dangerous wingers, they look to create wide overloads and enter the final third through the wide areas. This offers a more controlled approach in comparison to their direct strategy. Atlético’s dribble and cross map in the final third over the last five matches displays this very well. 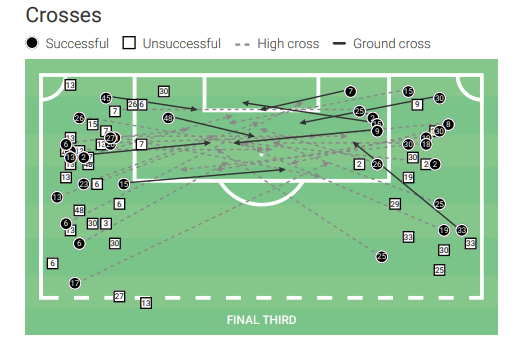 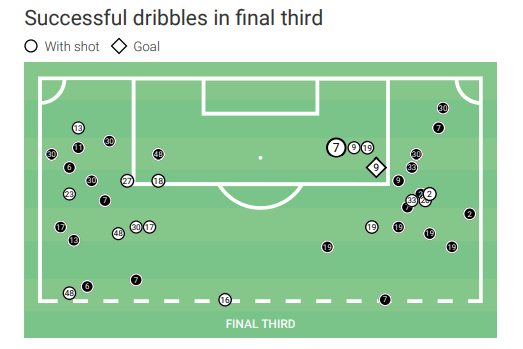 One example of this can be seen in their build-up against Uberlandia. The winger has dropped very deep while one of the central midfielders is providing support in the wide channel. This essentially creates a 3v2 in the wide area, allowing them to break the opposition’s high press. The right-back finds the winger who is quickly pressured by the defender near him. As this defender approaches, he leaves space behind him, which is quickly attacked by the central midfielder. The winger plays a progressive pass down the channel and Atlético successfully take advantage of numerical superiority. 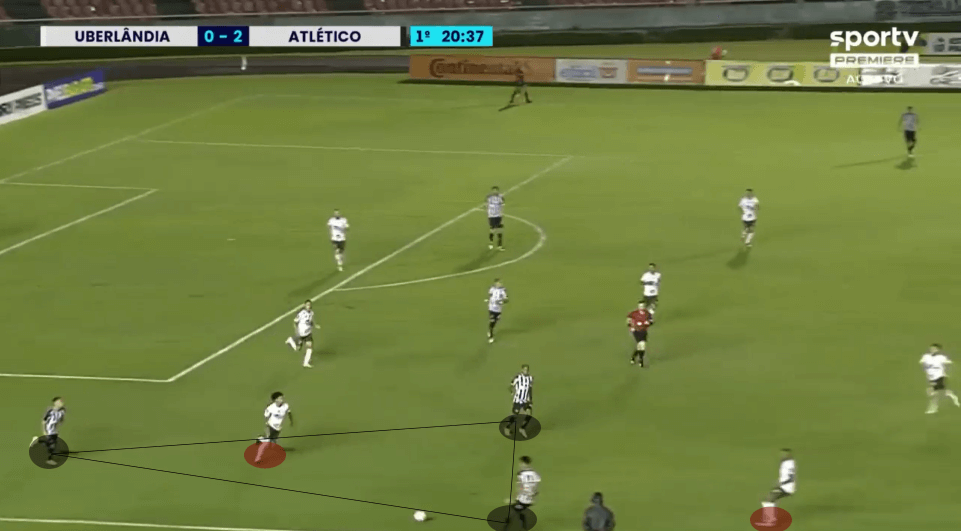 Another manner in which they attack the wings is through overlaps. Guga and Arana are very attacking fullbacks who constantly look to provide support in an attack. In the instance below, Guga completes an overlap on the right-hand side. This forces the lone defender to make a decision: track Guga or stay on the ball-carrier. If performed correctly, this is a highly effective strategy. 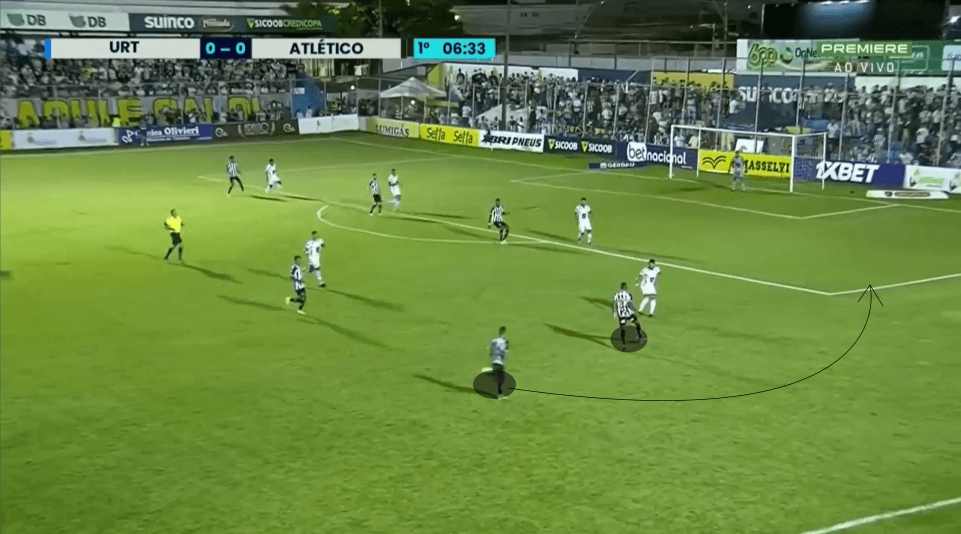 Finally, Atlético’s counterattacks also look to exploit wide areas. The instance below perfectly illustrates this strategy. As soon as the ball is won in the midfield, the forward is already making a run in the wide channel. This spreads the defence and allows players to attack in the middle. 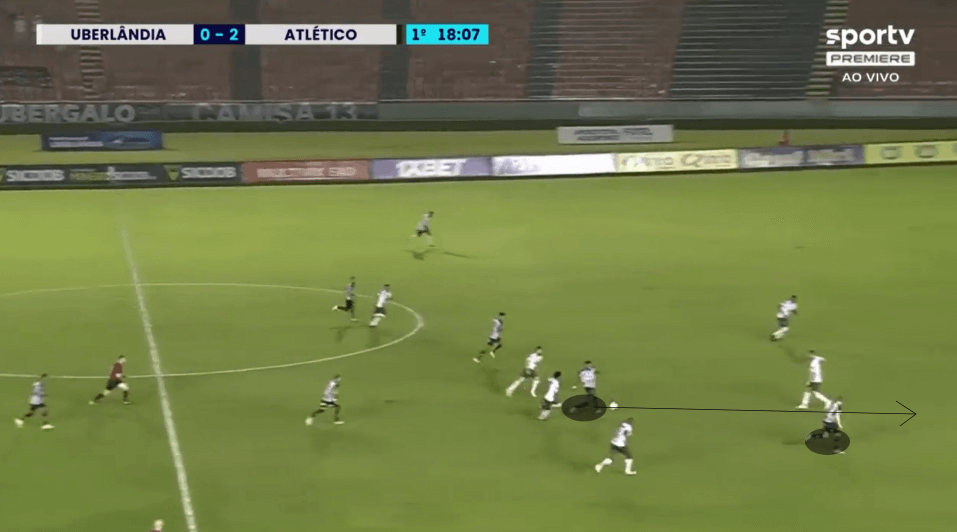 Antonio Mohamed wants his side to press very high and intensively. It allows them to control matches and be so attacking. In these first six games, they have averaged a PPDA of 6.51, which is incredibly good. As Atlético have a very deep squad, they will be able to maintain this style of play throughout the year. Their recoveries in the final third map displays just how effective they have been. A great deal have come from positional pressing, but it is most impressive how many lead to shots and goals. 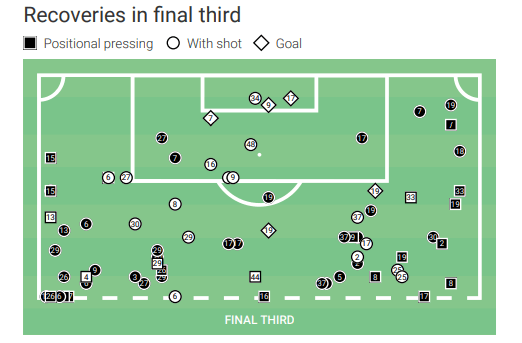 The example below illustrates how committed they are to the high press. After successfully trapping the opposition into a corner, they go for the taking. Most impressively, though, is the number of players they have committed forward. 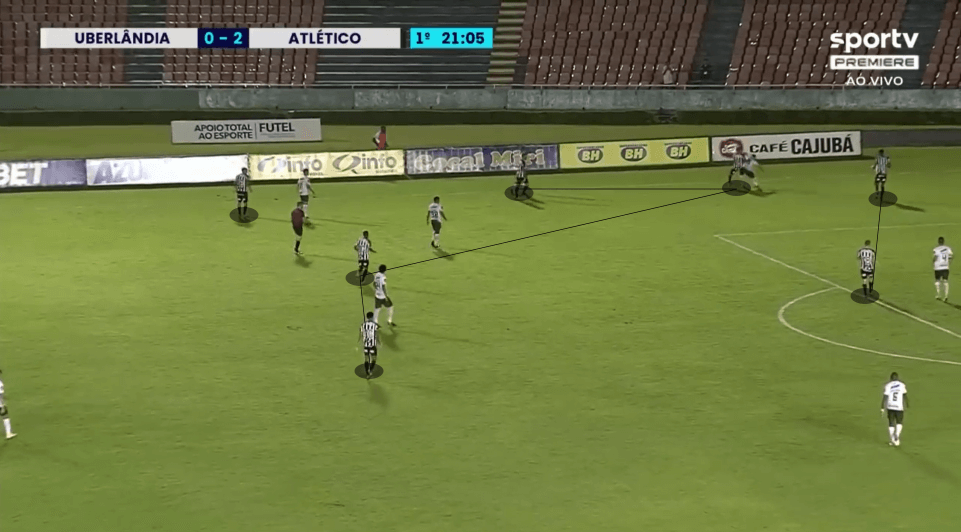 They organise their high-block in a 4-4-2 as well. The two centre-forwards lead the press, and the team looks to remain very compact. Notice how far inside the right-winger is as he tries to win the ball. Rather than introducing a man-marking type of press, they press in a very compact block. 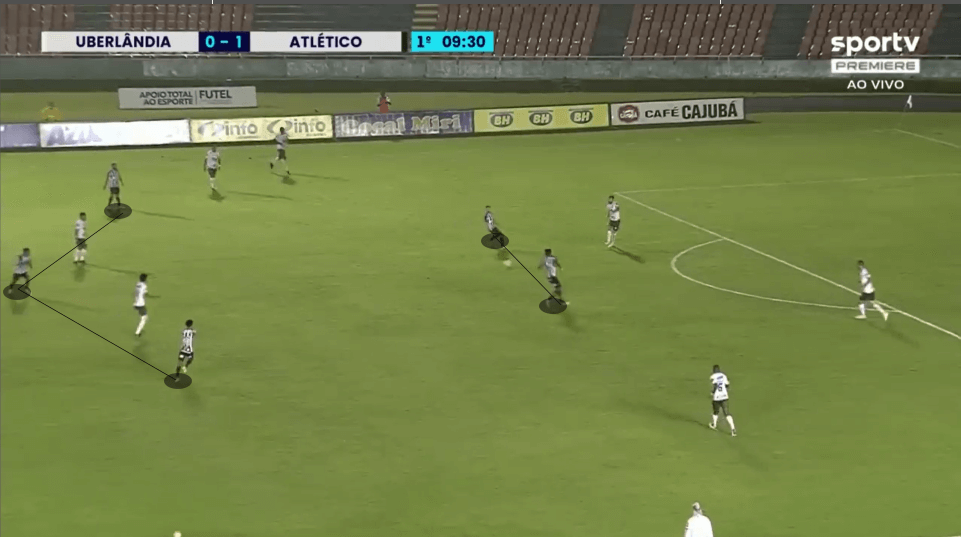 Even in lower defensive blocks, they still look to maintain the intensity. Their mid-block also consists of a 4-4-2 where the two centre-forwards lead the press. Despite being a mid-block, they still press very intensively. 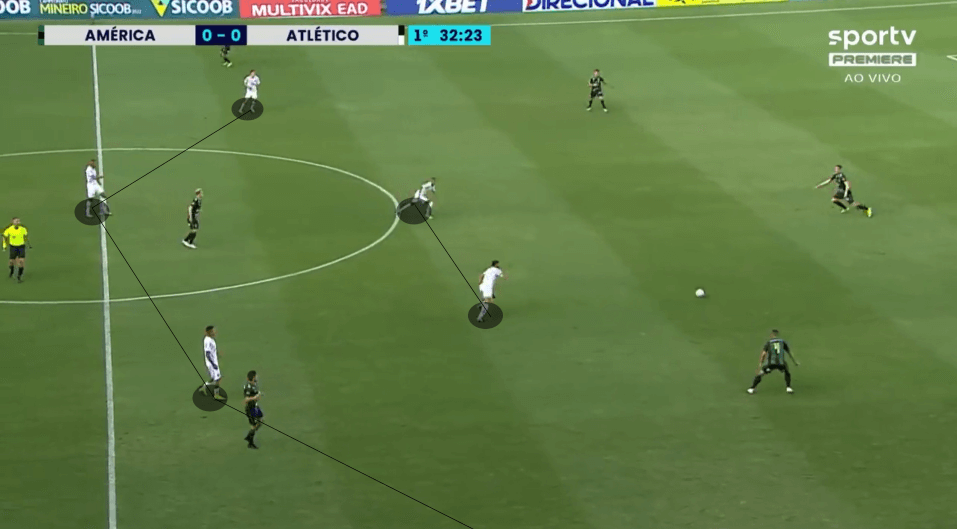 Despite being early days in Antonio Mohamed’s career at Atlético, some key characteristics in his tactics are starting to show. While some may be more effective than others, it is clear what sort of football he is attempting to implement. Undoubtedly, he will adapt and continuously evolve his tactical plan throughout his team at Atlético. With such a strong and deep squad, it will be very interesting to see how well he succeeds. The standard is very high as his predecessor, Cuca, was incredibly successful.