Scotland has produced an array of full-back talents in recent years with Nathan Patterson becoming the latest full-back export from the Scottish Premiership when Everton snapped up the right-back from Rangers in January.

Although yet to make his mark on Merseyside, Patterson follows in the footsteps of the likes of Andy Robertson, who moved from Dundee United to Liverpool, via Hull City, and Kieran Tierney, who joined Arsenal from Celtic in 2019.

19-year-old Aaron Hickey could also join the Scottish full-back contingent in the Premier League next season too, with Arsenal said to be one of a number of clubs lining up a summer move for the former Hearts man following his impressive form at Serie A side Bologna over the past two seasons.

With this year’s Scottish Premiership now over, I’ve picked out three young players from this season’s campaign who might be the next Scottish full-back in line for a big move, using data to assess their performances.

The dataset I have used for this data analysis includes all full-backs and wing-backs who have played a minimum of 1,000 minutes in this year’s Scottish Premiership.

The data is retrieved from Wyscout, and Python is used to convert the per 90-minute numbers into percentile ranks. The percentile ranks are then presented in a pizza chart to visualise their performance across several key metrics. 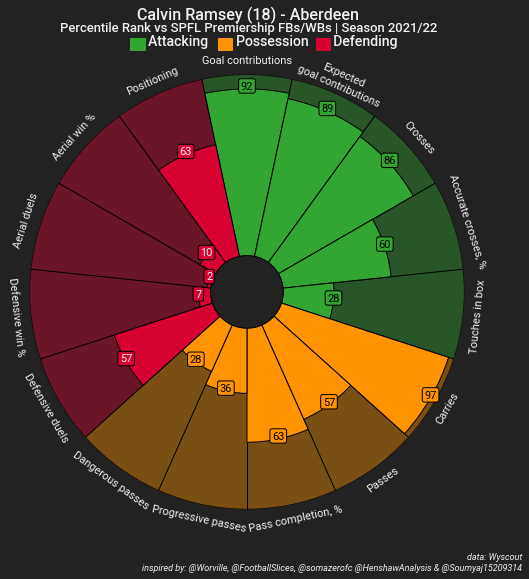 No real surprise who I’ve picked out first here. Widely expected to leave for the Premier League this summer, Aberdeen’s Calvin Ramsey has had a breakthrough year, catching the eye of elite clubs across Europe despite the Dons below-par season.

Ramsey, who has played right-back in Aberdeen’s 4-2-3-1/4-3-3 this season, profiles as a modern full-back with very impressive numbers for attacking metrics.

As his pizza chart show, Ramsey is a high-volume crosser, capable of producing quality deliveries from different areas of the pitch. His accuracy score for his crossing is above average for the Scottish Premiership level but could still be improved further.

His exceptional ball-carrying ability also shows through with one of the top scores amongst all full-backs/wing-backs in the league for carries (a combination of dribbles and progressive runs).

Defensively, his success rates for duels are relatively low, and although he does rank above average for positioning (shots blocked and PAdj interceptions) it is clear the defensive side of the game is where Ramsey can improve most. At just 18-years-old though, those improvements will come in time.

With Liverpool and Leeds United said to be at the front of the queue for Ramsey’s signature this summer, it will be interesting to see how he continues to develop if he does make a big move so early in his career. 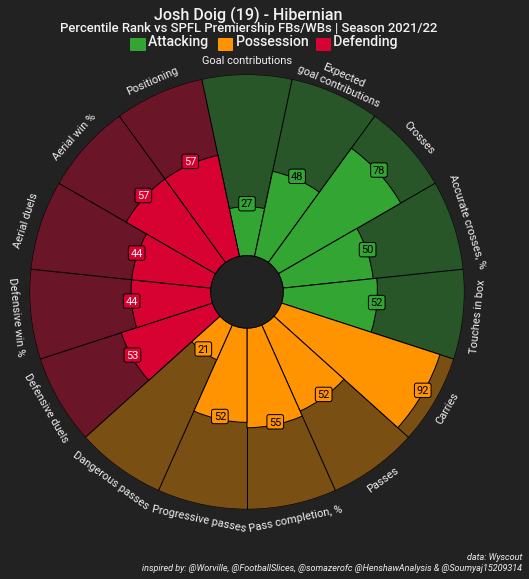 The next player I’ve picked out is Josh Doig from Hibernian, who has been attracting interest from clubs across the continent since he broke into the Hibs team last season.

Although Hibernian have also had a difficult season, finishing in the bottom six like Aberdeen, the left-back has continued to produce impressive displays for the Easter Road club.

As we can see from his pizza chart, Doig, who has also played centre-back and left-midfield this season, has a rounded full-back profile. He has steady defensive numbers and scores around the average mark for most possession metrics.

Like Ramsey though, Doig’s strengths lie in his offensive abilities. He is a high-volume crosser, with an average percentile rank for his accuracy. He also ranks very highly for carries and, although his goal contributions rank is low (he registered 3 assists throughout the season with no goals), his expected goal contributions rank is around the league’s average for his position.

Again, like Ramsey, Doig has room for improvement in a few areas of his game. However, it is also worth putting his numbers for the season in the context that he has been used in a few different positions and systems.

Those impressive attacking qualities can still be seen and, having earned his first international call-up earlier this season, Doig will no doubt feature on the shortlist of several clubs around Europe. 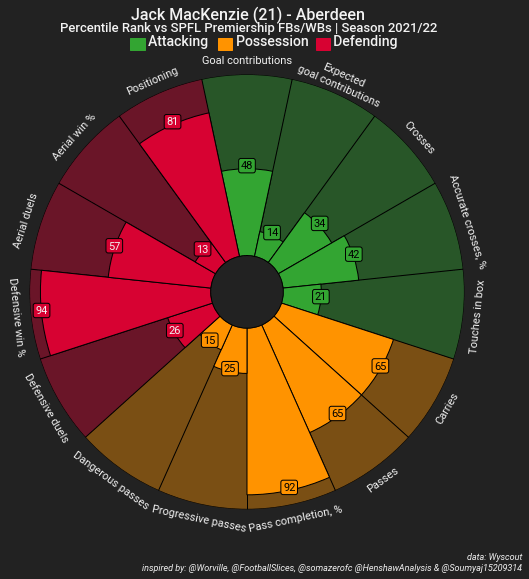 MacKenzie, like Ramsey, is a product of the Aberdeen academy. He has also enjoyed a breakthrough season at Pittodrie, overcoming injury issues earlier in the year to become a regular in the first team.

Although not as effective offensively (1 assist and 1 goal this season), MacKenzie’s crossing accuracy rank is only a little below that of Ramsey and Doig while his rank for carries is above the league average too.

Ramsey and Doig do have higher ranks for dangerous passes (key passes and through passes) and progressive passes, but MacKenzie does appear to be very secure in possession, with one of the highest ranks of all full-backs/wing-backs in the league for his pass completion, %.

A different profile of full-back to the other two highlighted in this piece, MacKenzie is still certainly worth highlighting too.

With a contract extension to 2025 signed last December, Aberdeen certainly believe that he has the potential to develop into a top full-back.

All three of these players have the potential to follow a similar path to Robertson, Tierney, and Patterson in the future.

Calvin Ramsey and Josh Doig could well secure moves to a bigger league this summer while scouts from top 5 league clubs may also be monitoring the progress of Jack MacKenzie.

No matter what path these players take next, there will likely continue to be an abundance of full-back talents for the Scotland national team to choose from for years to come.