There are several young players who have moved on to a higher level after performing well in the Scottish Championship in recent seasons.

Players, such as Kevin Nisbet, signed by Hibernian from Dunfermline Athletic in the summer of 2020, have gone on to become key performers for teams in better quality leagues, and even gained international recognition.

Other recent examples include former Raith Rovers midfield pair Regan Hendry and Dylan Tait. Hendry has helped Forest Green Rovers secure automatic promotion to EFL League One this season, while Hibernian returned to the league to sign Tait last summer who was enjoying a successful loan spell back at Rovers, and then from January at Kilmarnock before injury curtailed his 21/22 season.

With the 21/22 season now finished, I’ve picked out three young midfielders who have made an impact this year, and who may have the potential to make the step up to a higher level.

In the data analysis, I have included midfielders who have played a minimum of 800 minutes, mostly at CDM, CM OR CAM, in this season’s Scottish Championship.

All the data is retrieved from Wyscout, and Python is used to convert the per 90 numbers into percentile ranks. The percentile ranks are then presented in a pizza chart to visualise their performance across several key metrics. 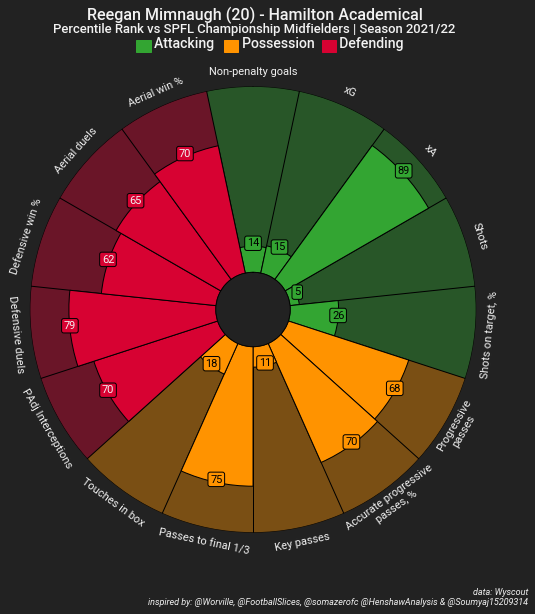 The first player I have picked out is Reegan Mimnaugh. A product of Hamilton Academical’s acclaimed academy, producers of midfield talents such as James McCarthy and James McArthur, Mimnaugh has had an impressive season despite Hamilton’s mid-table form.

Relegated from the Premiership last season, the Lanarkshire side have had an indifferent season, rarely ever threatening to challenge for a promotion play-off spot. Despite this, Mimnaugh has still shown the attributes which have previously seen him linked with English Premier League sides Leeds United and Tottenham.

Technically excellent, Mimnaugh has played as an “8” but is commonly deployed as a “6”, either in a double pivot or often on his own, in Hamilton’s 4-1-4-1.

As his pizza chart shows, Mimnaugh is a productive deep-lying playmaker who is also defensively sound. His high rank for progressive passes and passes to the final third has seen him put up one of the highest xA numbers of all midfielders in the dataset.

His low scores for non-penalty goals, xG, shots and touches in the box highlight his deeper role. His defensive durability also comes through with above-average ranks for both defensive and aerial duels win, as well as an impressive rank for PAdj Interceptions.

Whether or not clubs from the Premier League look at Mimnaugh again, there is no doubt he has attributes that could interest clubs a higher level. 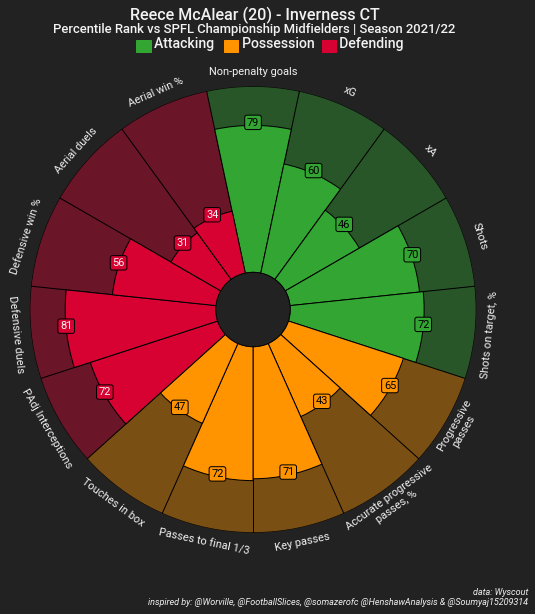 Inverness Caledonian Thistle’s Reece McAlear is the next player picked out. On loan from Norwich City, Glasgow-born McAlear was picked up by the English Premier League side from Motherwell in 2019.

Playing for the Steelman’s under 20s at just 15, McAlear didn’t even make an appearance at Fir Park before Norwich snapped him up. He played a handful of EFL Trophy games for the canaries and turned out for their under-23s in the Premier League 2 before signing for Inverness on a season-long loan last summer.

He can play in a deeper role but most often as an “8”, McAlear is a powerful player who is good on the ball. He possesses a decent goal threat, finding the net four times, as well as registering three assists, helping Inverness to a play-off place and a shot at promotion to the Scottish Premiership.

Looking at his pizza chart, he profiles as a rounded central midfielder with decent scores across attacking, possession and defending. Although he scores reasonably well for all sections, his goal threat shows through most with high scores for non-penalty goals, xG, shots and shots on target.

In terms of possession, his progressive passing numbers are around average, but he does score quite high for both passes to the final third and key passes. Again, highlighting his attacking threat.

Defensively, his aerial duel win % is below average but he is above average for defensive duel wins. He also has an impressive rank for PAdj Interceptions.

Out of contract at Norwich this summer, McAlear is said to be attracting interest from several Scottish Premiership clubs, including St Mirren and St Johnstone. He certainly has the potential to play at that level, if not higher in the near future. 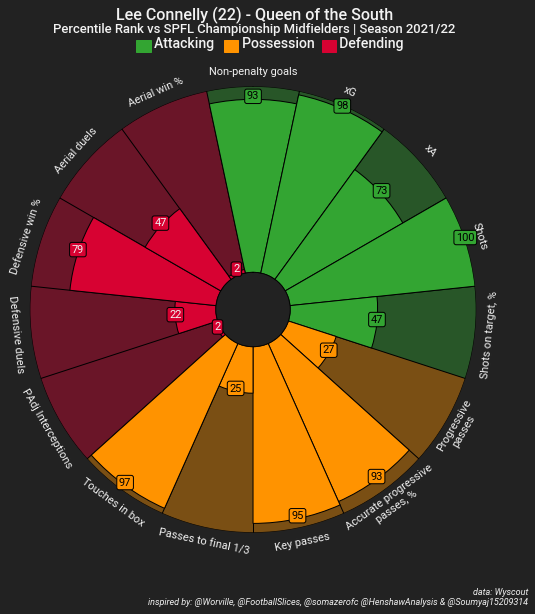 The final player I have chosen is Queen of the South’s Lee Connelly. The attacking midfielder came through Sunderland’s youth system, being loaned out to South Shields and then Alloa Athletic before joining the Doonhamers on the expiry of his contract with the League One side last summer.

Connelly has been a standout performer this season for Queen of the South, despite them enduring a torrid campaign which has culminated in relegation to League One.

The most attacking of the three I have picked out, Connelly is a tricky player with good balance and excellent feet. He has played as a centre forward on occasion, but more often plays as a “10” in either a 4-2-3-1 or a 4-3-1-2.

His attacking qualities are clear from his pizza chart, topping out metrics for non-penalty goals, xG and shots, while he also boasts a high xA number, showing his creative side too.

Not only has his output been impressive for a side that have been relegated, six goals and four assists overall, he’s also put up good numbers for some possession metrics.

Although low for progressive passes per 90 minutes, likely due to Queen of the South having less of the ball in most games this season, his rank for accuracy is very high. Again, highlighting his creative abilities.

It is not surprising to see his defensive number as he plays in more advanced roles. However, he does boast an impressive rank for defensive duels won, %.

Also out of contract this summer, Connelly is likely to attract plenty interest, certainly from other teams in the Scottish Championship now Queen of the South have been relegated, but I would not be surprised if teams at a higher level are tracking his progress too.

All three of these young midfielders have had relatively successful seasons in the Scottish Championship. In a tough, competitive league, where experience is sometimes more desirable, they have been able to show their qualities. All three possess the potential to play a higher level and it will be interesting to track their progress going forward.