A goalkeeper’s peak usually starts when they’re 27, meaning any time before this, a goalkeeper is still developing and learning. Because of this, the most elite clubs usually look to get younger goalkeepers to bolster their squad for the future, whereas smaller clubs will look to find a goalkeeper with the highest potential to be their first-choice goalkeeper. This means that more and more clubs are focusing more on their recruitment on goalkeepers.

This data analysis will use statistics to find the best goalkeepers yet to reach their ‘peak’, so those under the age of 27. We will use data from all of these goalkeepers from the current season to identify the best young goalkeepers to keep an eye on. Because we are still relatively early on in the season, we will include goalkeepers who have played at least 500 minutes of league football. We will look at different areas of goalkeeping and then select the best three overall performers.

In terms of shot-stopping abilities, it’s important to take into consideration the level of the club that said goalkeeper plays for. This is because keepers with a weaker defence will likely have worse stats, whereas keepers who are more protected will have a better chance of not conceding.

This first graph will look at the strength of each goalkeeper’s defence, through the number of shots they face per 90. And also how often the goalkeeper saves these shots, through save percentage. 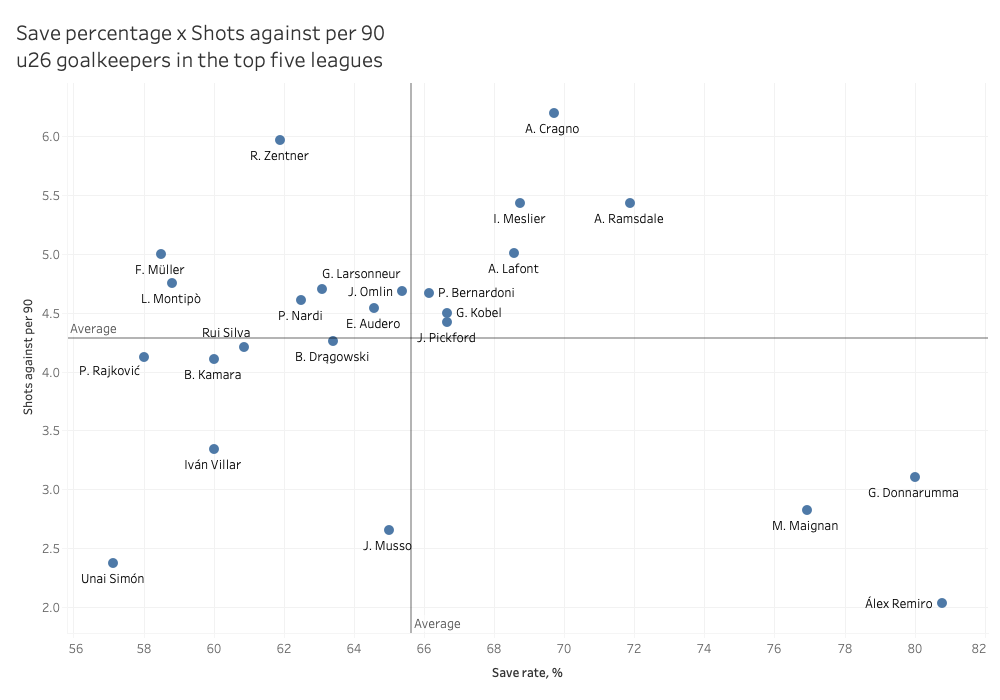 Instantly, we can see that there are three players that stand out. The best of them is Real Sociedad’s Álex Remiro. He and his team boast one of the best defensive records within the top five leagues this season. The Spanish team only face 2.03 shots per 90 because of their terrific defence, however, Remiro still saves 80.77% of these shots.

Next best in terms of save percentage is Gianluigi Donnarumma. The AC Milan keeper, still only 21-years-old, has had an impressive start to the 2020/21 season. He’s faced more shots on target per 90 than Remiro with 3.1 and only has a slightly worse save percentage with 80%.

The last of the standouts is Lille’s Mike Maignan. The 25-year-old is held in very high regard in terms of the France national team. His statistics definitely back this up. Maignan faces 2.82 shots per 90 and saves 76.92% of them.

In terms of goalkeepers that play for weaker teams defensively, Aaron Ramsdale surprisingly impresses. The Englishman hasn’t had the best start but still saves 71.88% of the 5.43 shots he faces per 90. Leeds’ Illan Meslier and Cagliari’s Alessio Cragno also impress. 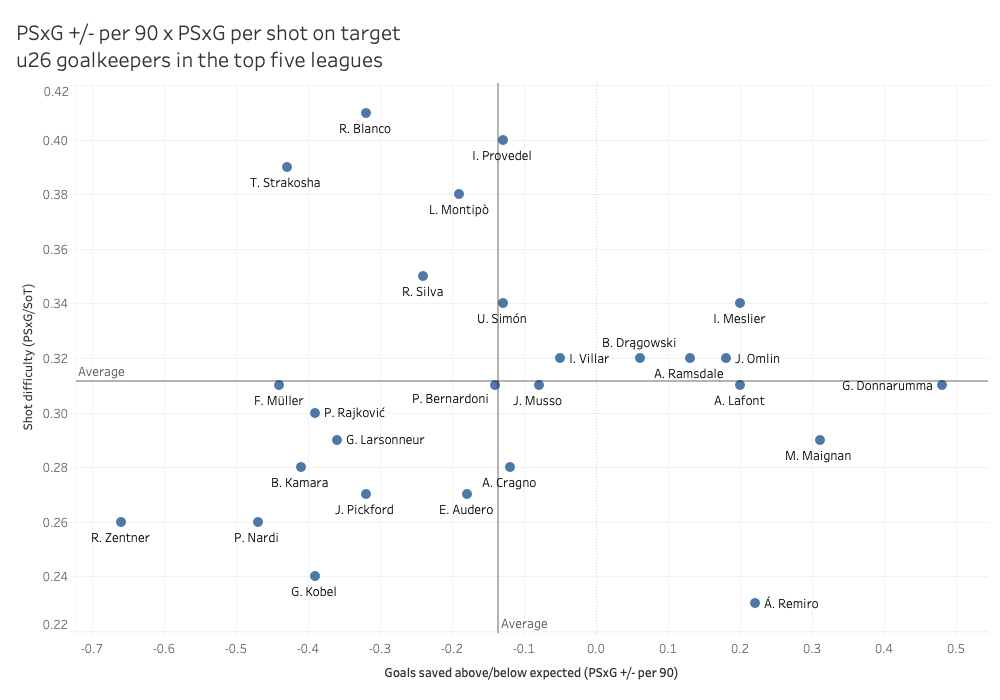 The three players with the best PSxG +/- per 90 value are the three standouts from the previous section. Donnarumma has the best, he has saved 0.48 goals per 90 this season, and he has faced fairly difficult shots with a value of 0.31. The average shot difficulty that he’s faced is just below the sample average.

Former PSG man Maignan saves the second-most goals per 90 with 0.31, but he faces less difficult shots than Donnarumma with 0.29. Remiro faces far easier shots than both with just 0.23, he has, however, saved 0.22 goals per 90.

Meslier also impresses here too. The 20-year-old has predictably faced some difficult shots this season, having just been promoted with his Leeds team. The Frenchman has faced an average shot difficulty of 0.34, but he’s managed to prevent 0.2 goals per 90.

New Montpellier goalkeeper Jonas Omlin has impressed since joining the French side. He faces a harder than average shot difficulty with 0.32 and has saved 0.18 goals per 90. Alban Lafont has also had a great start to the season, facing a shot difficulty of 0.31 and saving 0.2 goals per 90.

Similar to shot-stopping statistics, passing stats are heavily reflected by their team’s tactics. In the modern game, most goalkeepers from top clubs are expected to be very good with the ball at their feet. Most prefer a more possession-based approach rather than long kicks upfield. This first graph will look at the number of passes made per 90, their accuracy, and also their tendency to pass the ball laterally. 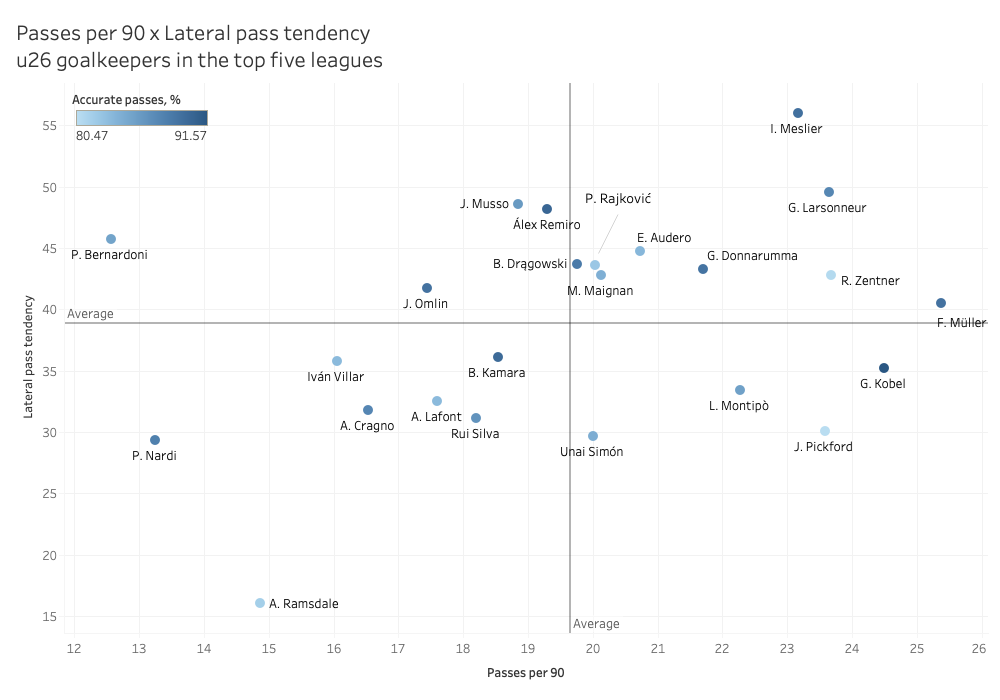 Freiburg’s Florian Müller makes the most passes per 90 with a huge 25.38. The 23-year-old hasn’t had the best start to the 2020/21 season in terms of goalkeeping, but he is instrumental to the way his team play.40.50% of his passes are lateral, just above the average. Because of this, he’s able to complete 89.22% of his passes.

Impressively, Gregor Kobel has the highest pass completion percentage and also the second-most passes per 90. The 23-year-old has completed 91.57% of the 24.49 passes he makes per 90. The Stuttgart keeper is a vital part of his team’s tactics.

Previously mentioned Meslier stands out too as he has the highest lateral pass tendency with 56.04%. The Leeds keeper helps his team play a more possession-based style. He is also very involved, making 23.16passes per 90. Because of his short and simple passes he has a pass completion percentage of 89.38%.

Meslier’s compatriot Gautier Larsonneur also shows up well here. The Brest man makes 23.64 passes per 90, with 49.53% being lateral. Larsonneur completes 87.46% of these passes.

Much like goalkeeper passing, sweeping has become a huge part of the modern game. Sweeping is fast becoming a skill that is no more a bonus, but rather a necessity for top-level clubs who play with a high defensive line. We will use both simple and advanced stats to evaluate each keeper’s sweeping abilities. 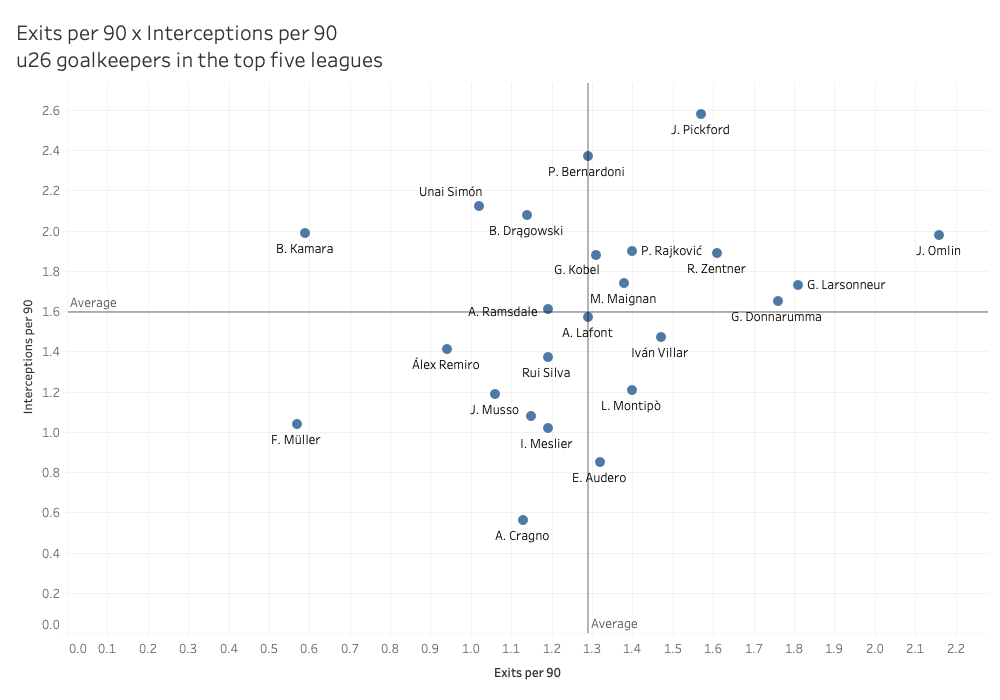 This first graph looks at how well each keeper can read danger and then make an action to prevent a goal. It looks at the number of interceptions and exits each goalkeeper makes per 90.

Omlin has the most exits with 2.16 per 90, and he also makes an above-average amount of interceptions per 90 with 1.98. On the other side of things, Everton’s Jordan Pickford has the most interceptions per 90 with 2.58 and he also has 1.57 exits per 90. Pickford has been heavily criticised over the past three seasons due to his bad shot-stopping techniques and bad decision-making. However, his sweeping abilities are very good.

This next graph will use more advanced data. It looks at the percentage of crosses that each goalkeeper has stopped, and the number of defensive actions they make outside of their penalty area per 90, this latter stat measures their likeliness to leave their box, rather than just their line. 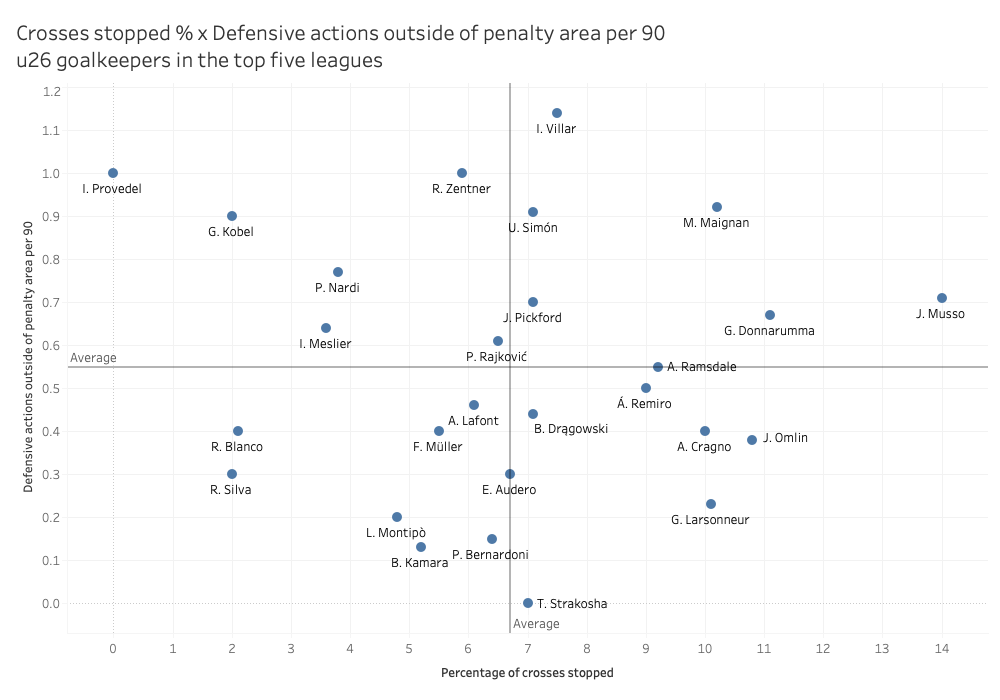 Udinese’s 26-year-old Juan Musso has prevented by far the most amount of crosses this season. He’s dealt with 14% of crosses he’s faced. He’s also very active outside of his box, making 0.71 actions per 90. The Argentinian has had a fairly good start to the season, conceding just 10 goals in 10 games and clearly protecting the space behind his defensive line and dominating within his box.

Donnarumma has the second-highest cross stop percentage with 11.1%. The AC Milan man is clearly an all-round goalkeeper, excelling in all areas we’ve analysed. He is also very confident outside of his penalty box, making 0.67 actions per 90.

Iván Villar, Celta Vigo’s goalkeeper, has the most defensive actions outside of his penalty area with 1.14 per 90. The 23-year-old started the season well but has since been replaced by Ruben Blanco. The former Spain u21 international has stopped 7.5% of crosses he’s faced.

Maignan is the only other goalkeeper that shows up well, with very even stats in both areas. The Frenchman has stopped 10.2% of crosses and made 0.92 actions outside of his penalty area per 90.

Gianluigi Donnarumma – Not a surprising name first, but Donnarumma was easily the best overall keeper throughout this analysis. He stood out in every area of goalkeeping that we analysed. AC Milan are currently top of Serie A and have the fourth-best defence. Donnarumma has been linked with numerous teams within Europe’s top five leagues, so it will be interesting to see how long he stays at AC Milan for.

Álex Remiro – Real Sociedad and their goalkeeper have had a great start to the season, and this has been built on their impressive defence. Remiro has only conceded 12 goals in 16 games, keeping seven clean sheets in the process. The 25-year-old could look to take advantage of his good form to find a move to a better team.

Illan Meslier – Leeds’ return to the Premier League has been well documented, as has their defensive liabilities. However, one shining light in their poor defence has been goalkeeper Meslier. The 20-year-old has already shown great potential. He impressed massively in both the shot-stopping and passing areas.