Chelsea 2022/23: Which centre-backs should the Blues target this summer? – data analysis

Under the guidance of Thomas Tuchel, last season Chelsea conquered Europe, winning the UEFA Champions League. In his first full season at the club, he somewhat fell short of expectations finishing third in the Premier League, reaching the quarter-finals of the UEFA Champions League and losing both domestic cup finals to Liverpool on penalties.  The second half of the season was under the shadow of off the field issues with Roman Abramovic selling the club and sanctions being placed on it.

There is now a fresh start for Chelsea, which has recently been sold to a Todd Boehly-led consortium. The new ownership has promised Tuchel a £200 million pound transfer budget and one of the first areas that they will be looking to strengthen is at centre-back.

Antonio Rudiger has departed the club on a free transfer for Real Madrid, with Andreas Christensen looking likely to follow a similar path, to Barcelona. This is in addition to Azpilicueta and Thiago Silva being over the age of 30 and coming to the end of their careers. The club does have Trevor Chalobah, Malang Sarr, Levi Colwill and Ethan Ampadu, who are all young promising centre-backs however if they are going to close the gap to Liverpool and Manchester City, they will need some immediate quality.

This recruitment analysis and data analysis will look to analyse data and provide some potential options that Chelsea could acquire at centre-back this summer.

What does Chelsea want from their centre-backs?

The first place to start when looking to find replacements or suggest transfer targets is what the club want from their players in that position. Without having access to the club KPIs and the specifics of how Tuchel wants his players to play, the best way is to look at how the incumbent players perform in those areas, to maybe find some clues. Below shows some percentile ranks of Chelsea defenders, amongst centre-backs with over 2000 minutes in Europe’s top five leagues plus the Eredivisie and Primeira Liga.

The first chart shows us departing centre-back Antonio Rudiger, who is usually used on the left of the back three. 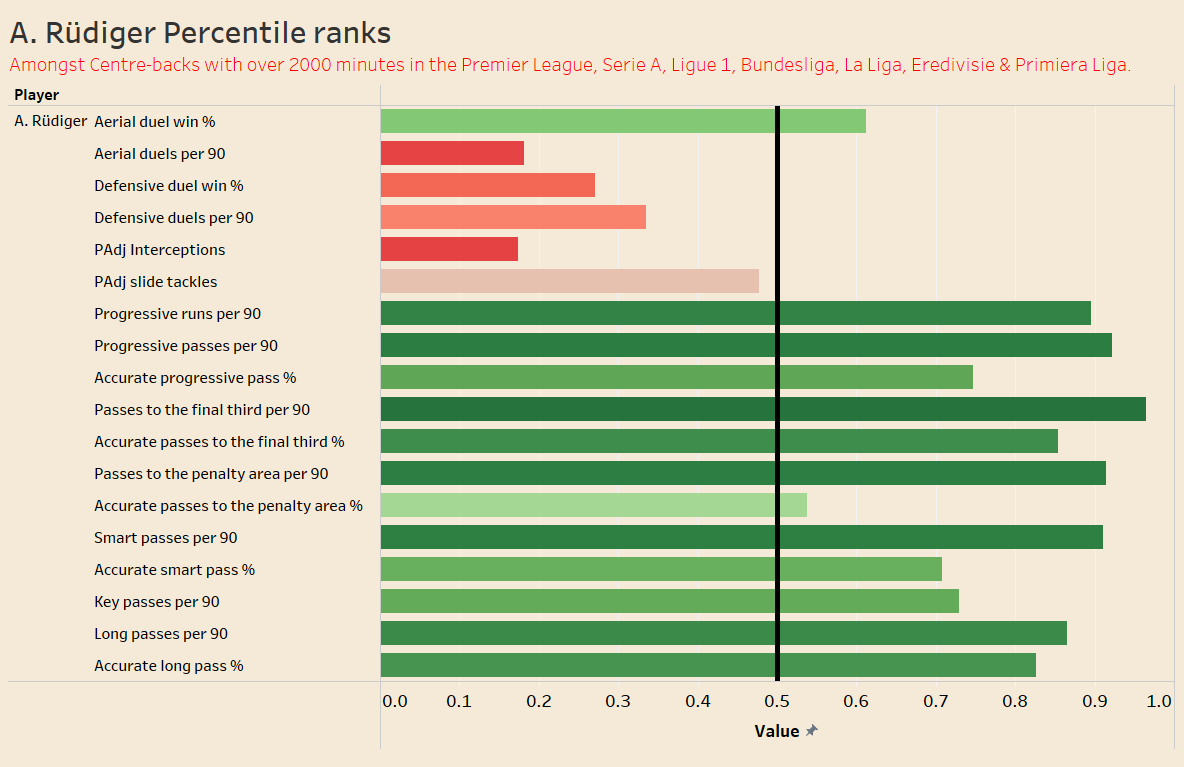 Secondly, we have Azpilicueta, now although he does play at right wing-back he is sometimes deployed on the right side of the back three. 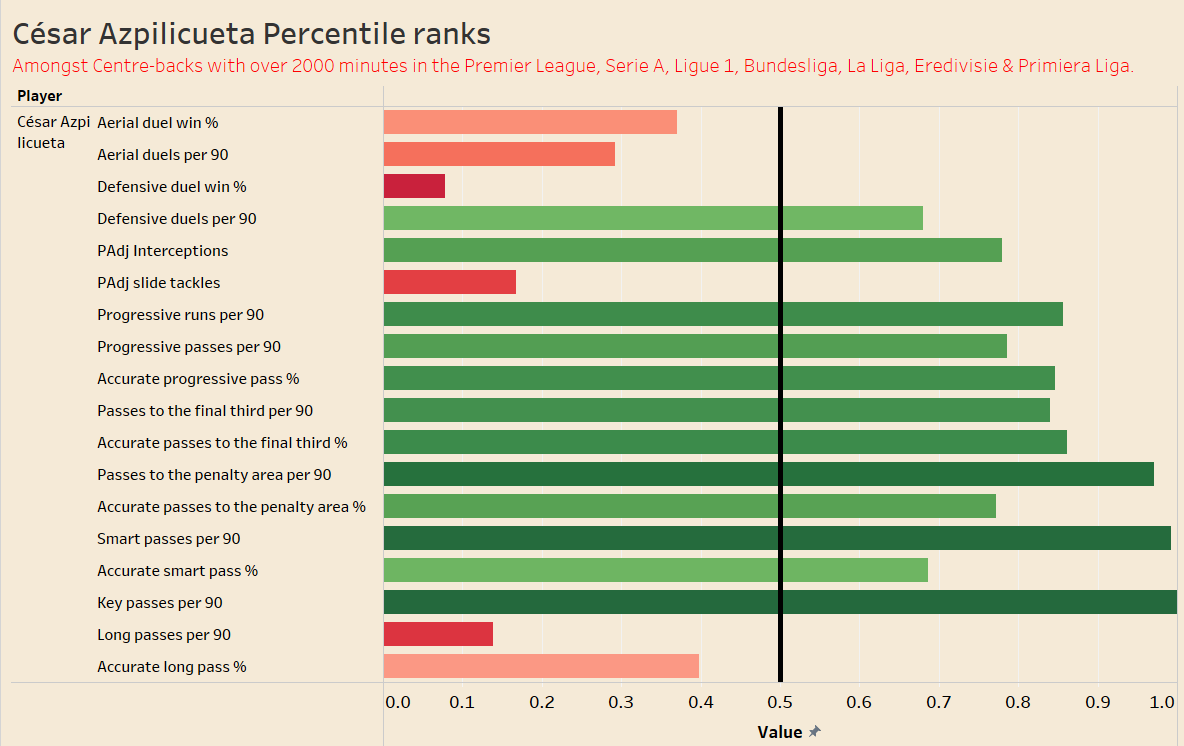 Finally, we have Thiago Silva the 37-year-old Brazilian veteran, who regularly plays in the centre of the back three. 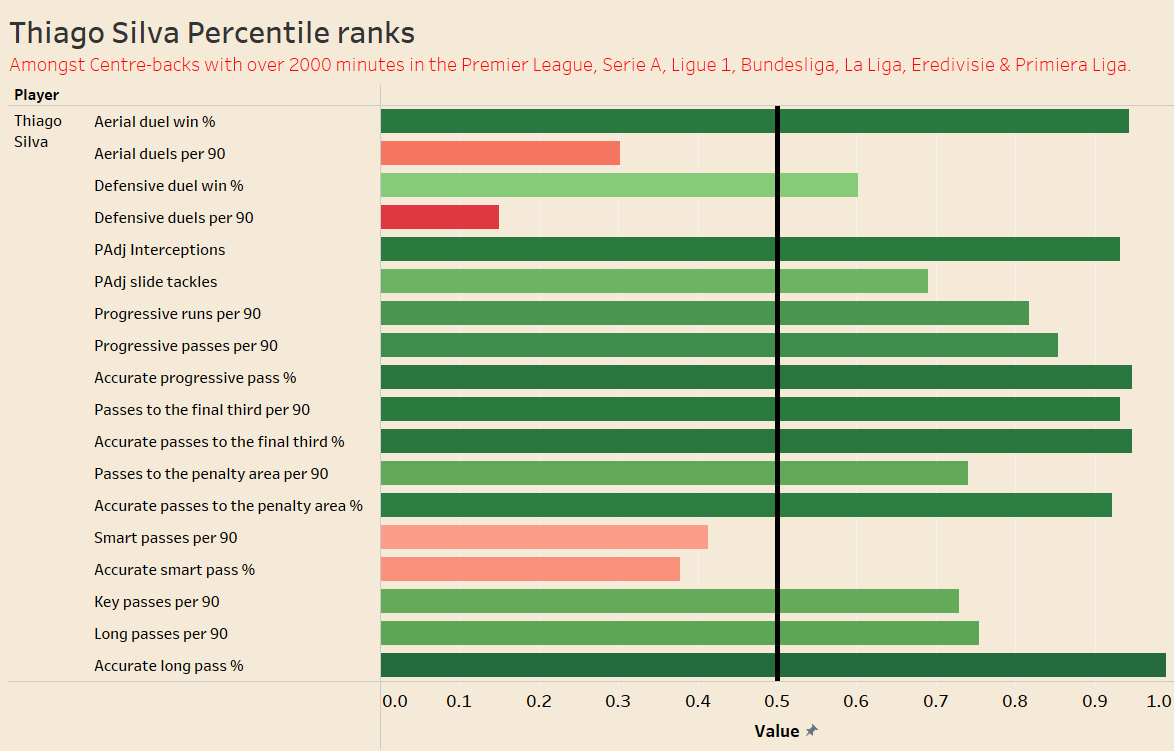 From these percentile ranks, you can see that all three players have different qualities, with Thiago Silva having the best defensive metrics and Azpilicueta having the best creative metrics (as expected as he is often used as a wingback). However, the common theme is they are all great ball progressors and excellent in possession, something we must consider when finding potential targets. It is also worth noting that Chelsea defends in a back three under Tuchel, so defenders who maybe suit this system or have previously been in a back three may be preferred.

Below, we will show some in possession statistics and highlight some of the sample’s top performers in these metrics, who would make smart transfer targets for Chelsea. Firstly, we have progressive passes per 90 and progressive runs per 90.  Now as always with these data metrics, we do have to provide context. With any in possession metric, they do have a bias towards to players who play in high possession teams and due to the sample size, we haven’t weighted these metrics for possession, which would remove this bias. It is also worth noting that players who play for high possession teams do have more experience and familiarity with being on the ball, something they will be asked to do at Chelsea. 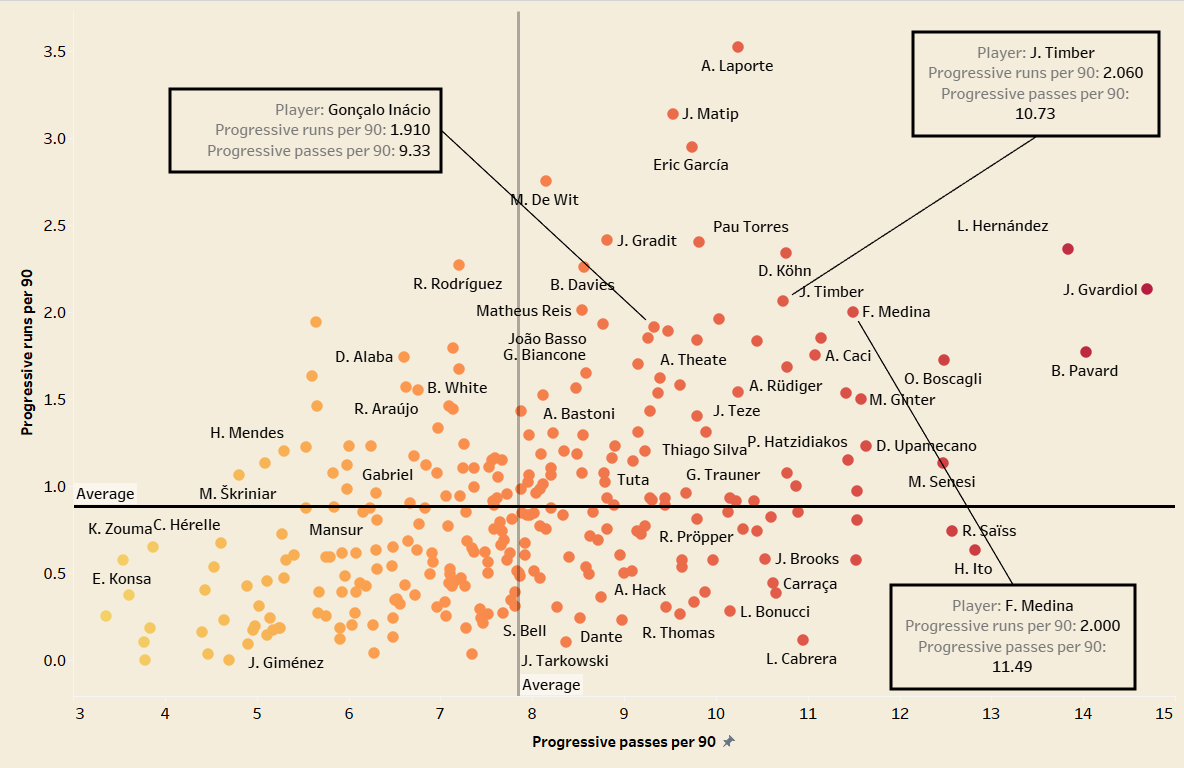 Goncalo Inacio is the first interesting name as he is an excellent ball progressor both in terms of passes and progressive runs. At only 20 years old he is a regular starter in the Sporting Clube do Portugal side and could be a future star defender. The next player is Jurrien Timber of Ajax. Now, he is heavily linked with Manchester United however we believe he would be an excellent fit at Chelsea. Timber can play as both a right-back and centre-back and playing on the right side of back three would suit him perfectly. Finally, Facundo Medina is a brilliant ball progressor and has real quality on the ball. His defensive qualities aren’t quite to the same level however if Chelsea is looking for a ball-playing centre-back who is comfortable playing on the left side of a back three then Medina is an interesting proposition. 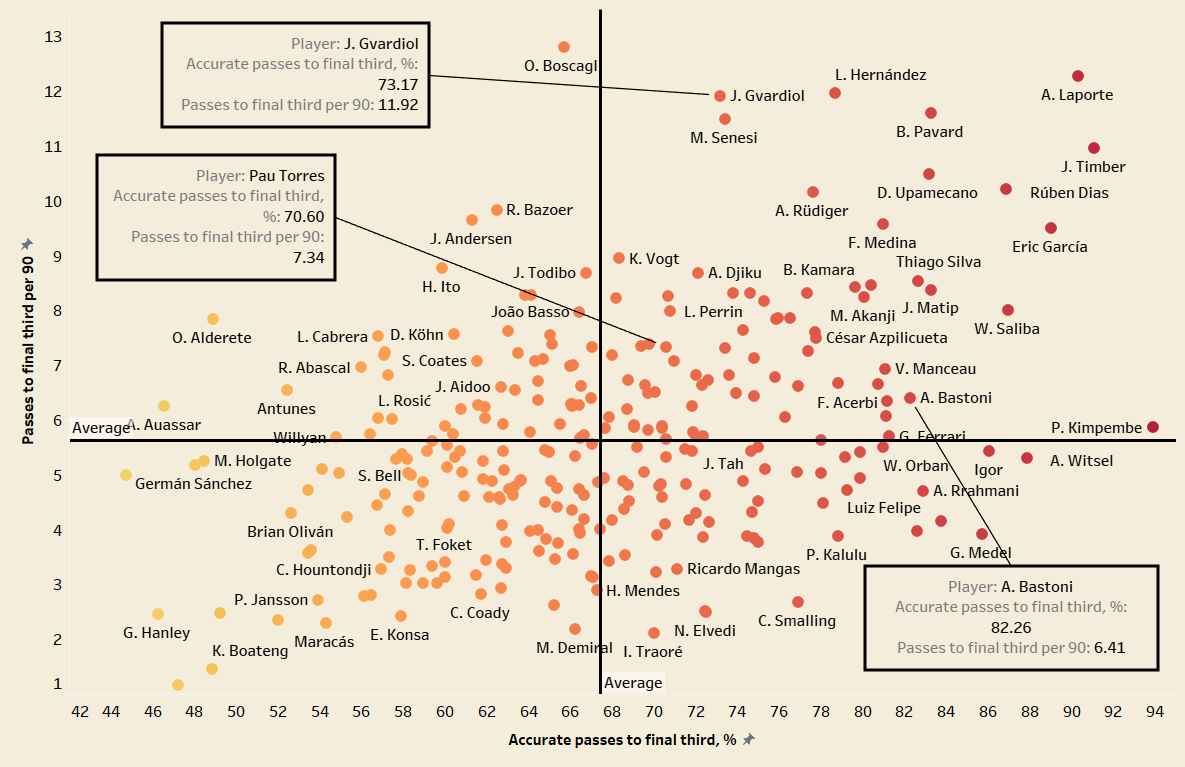 The first stand out performer who could be a realistic transfer for Chelsea is Josko Gvardiol of RB Leipzig. Gvardiol is an outstanding defender on the ball and has played as part of a back three this season. The above description of Gvardiol can be also given to Internazionale defender Alessandro Bastoni, who too will be of interest to Chelsea this summer.

The last name here is Pau Torres of Villarreal, an excellent ball-playing defender who does have physicality issues. Nevertheless, we think these could be mitigated by playing as part of Chelsea’s defensive back three.

The next set of metrics will be defensive metrics. Now assessing a defender’s defensive contribution with data is less straightforward. However, there are some metrics which can help us. The first ones are defensive duels per 90 and defensive duel win %. 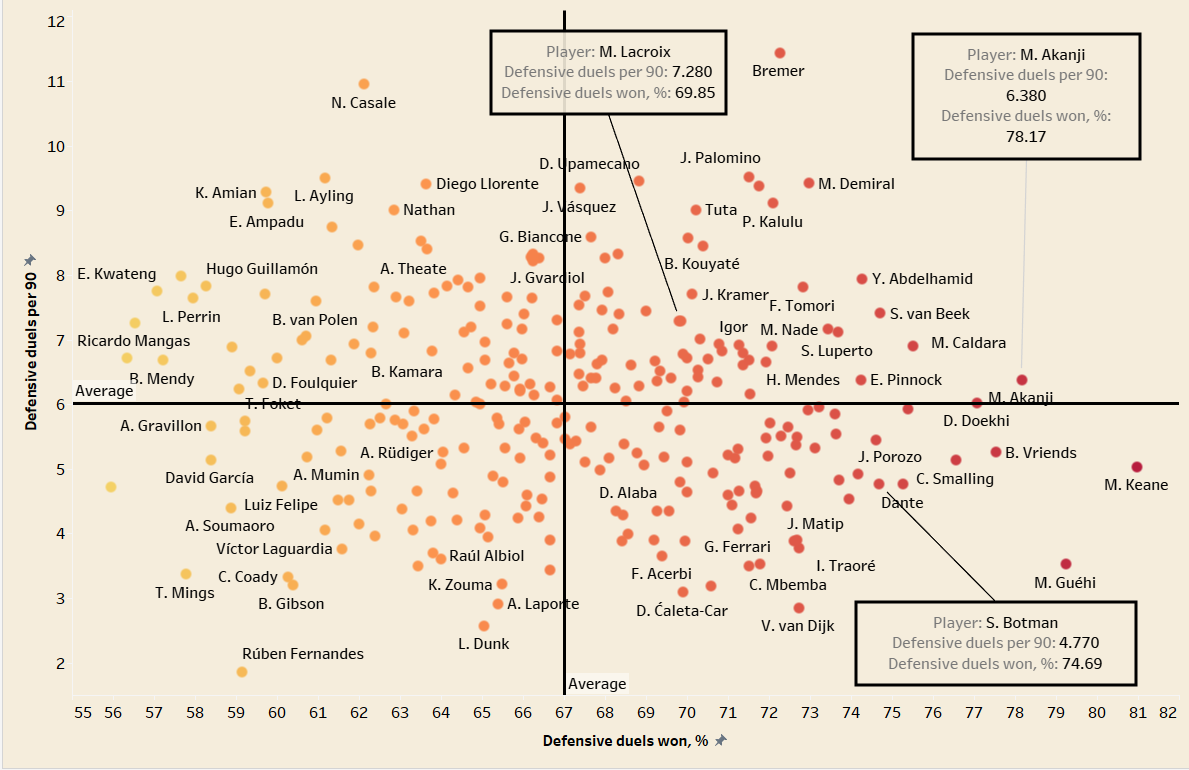 Firstly, we have Sven Botman who does engage in a below-average number of defensive duels but does win them at a high percentage. The 22-year-old Dutch defender will likely depart Lille this summer and could be a savvy pick up for the West London club.

Manuel Akanji of Borussia Dortmund is one of the best defenders at winning his duels in this sample and with vast experience at 26 would be a solid addition. Maxence Lacroix is a strong defender but someone who would need to improve on the ball.

The last data metrics we have are aerial duel per 90 and aerial duel win%, helping us understand the aerial ability of the players in the sample. 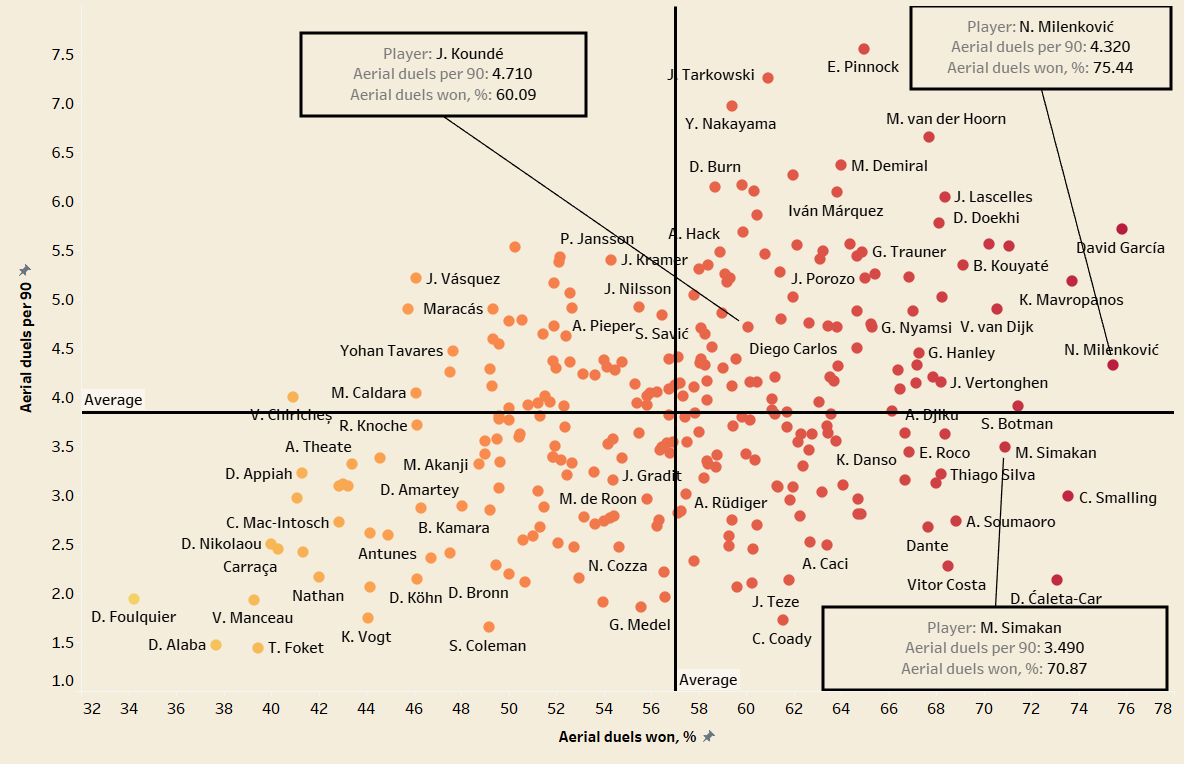 Jules Kounde is an impressive all-around defender who is heavily linked with a move to Chelsea this summer and rightly so.  Nikola Milenkovic of Fiorentina has the second-best aerial win rate of the sample which is impressive while also performing well in other defensive metrics which has seen him draw attention in recent weeks. Finally, there is Mohamed Simakan, another RB Leipzig defender who has had an impressive season as part of a back three.

There are several impressive young centre-backs who could provide the necessary quality for Chelsea this summer but the following three are players we believe would be the best fits.

First, we have Jules Kounde of Sevilla. Now, this may seem obvious with all the transfer rumours to the club but it makes a lot of sense. The French defender has proven himself in La Liga for a couple of years now. He is excellent on the ball with the ability to progress the ball frequently and accurately. Defensively, despite being under 6ft tall, Kounde still is impressive in the air and physically. He is also comfortable at right-back, making him a good fit as part of a back three. 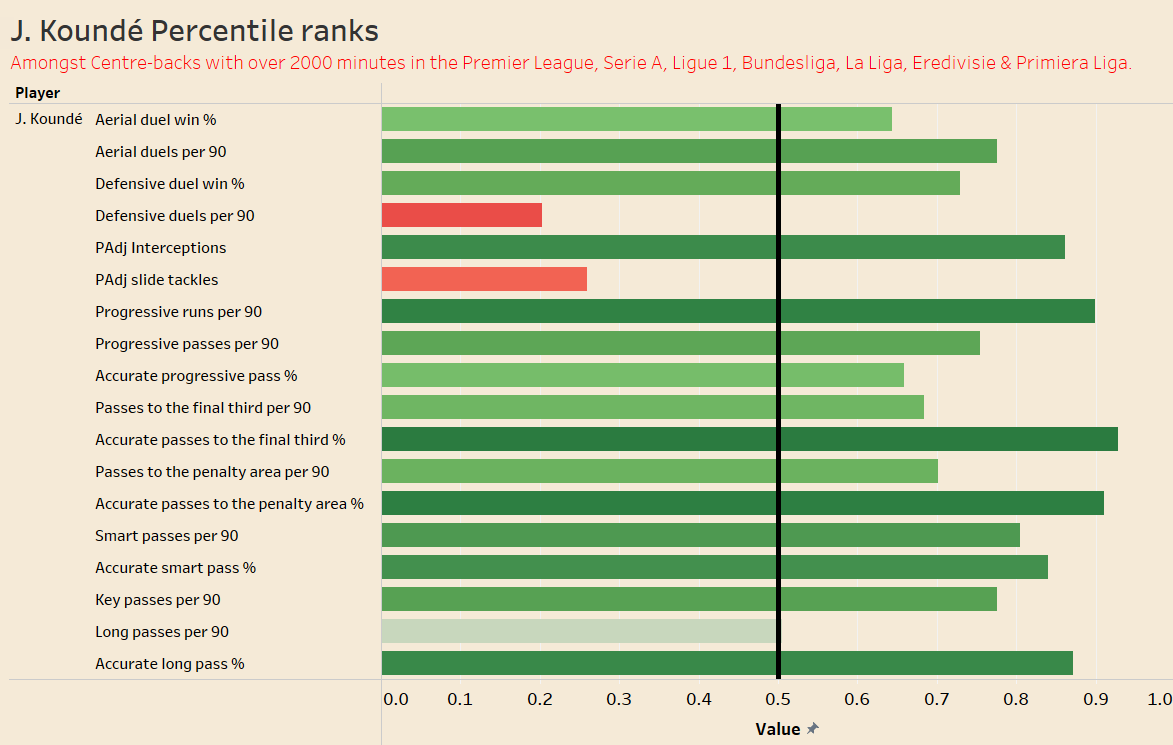 Gvardiol is one of Europe’s most impressive defenders, who would make a great fit for Chelsea. Having played in a back three this season for RB Leipzig, he understands the subtle differences it requires and his quality on the ball is there for everyone to see. His ball progression is excellent and is in the 90th percentile and above for progressive runs per 90 and progressive passes per 90. Defensively there is nothing that Gvardiol cannot do, with strong performances in both the air and ground. 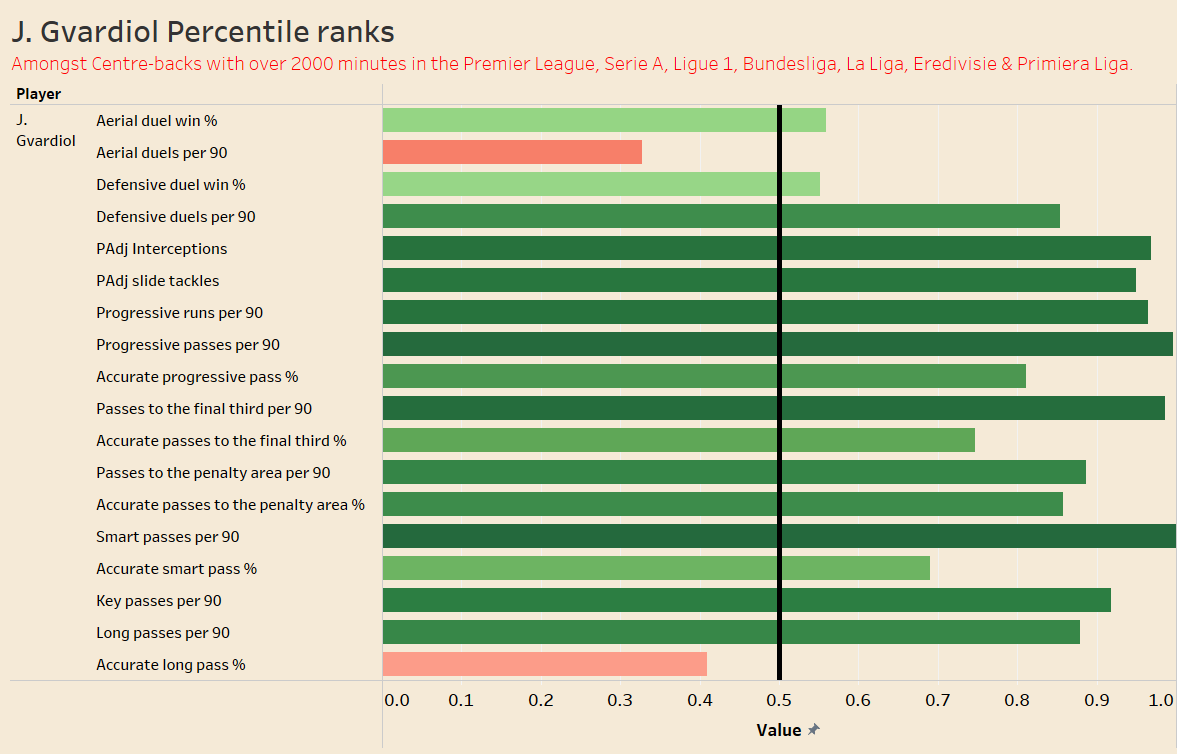 The Villareal defender is someone who would thrive off playing in a back three where his defensive and physical responsibilities are lessened. Strikers are more likely to play up against the central defender in the back three, which is a weakness of Torres’ game. Now, the below percentile rank shows some areas of weakness. However, some of these (defensive and aerial duels per 90) are reflections of his defensive style which is quite passive and controlled.  Finally, his quality on the ball will be able to shine through at Chelsea and he can help play a vital role in the build-up from the left of the back three. 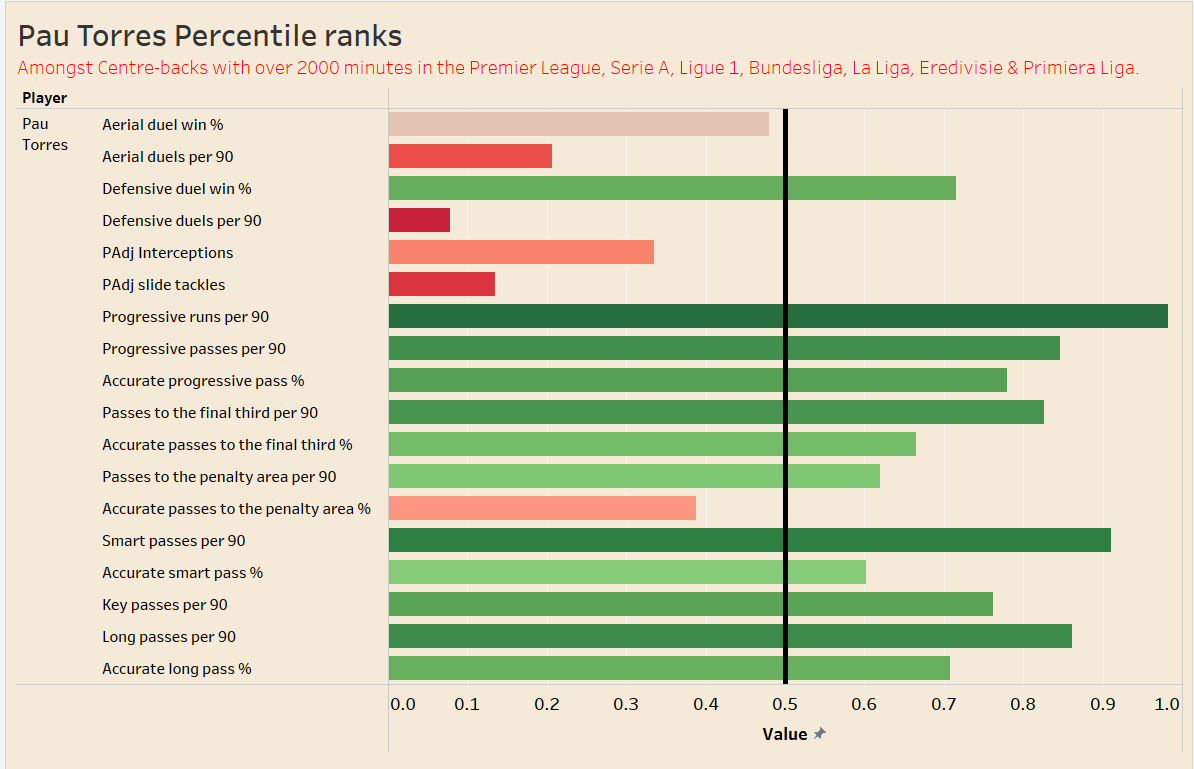 Hopefully, this data analysis and recruitment analysis has given you a greater insight into some of the names that Chelsea should be looking to pursue this summer and the reasons why they should be. The three selections above would make great additions to Chelsea’s squad this summer, fitting the tactical needs of the team but also bringing real quality to the defence. All three are realistic transfers with Chelsea having a strong possibility of actually acquiring the players in the transfer market.