Over the years, the Bundesliga has earned its reputation as a go-to league for young players looking to take the next step in their career. Premier League clubs are especially known to closely track the developments of those youngsters, ready to pay massive fees for signing them. Sébastien Haller and Joelinton are just two recent examples of this. Nevertheless, despite these regular losses of key players, Bundesliga clubs still manage to discover and attract new talent from around the globe and also in this season, there are some very interesting players showing their potential.

In this data analysis, we will examine fledging U23 players that have made a major impact in the Bundesliga 2019/20. Besides that, in this analysis, we will take a closer look at attackers that stand out and point out what their capabilities are.

What does the data say?

We’re all familiar with the seasons that the absolute stars, such as Timo Werner and Jadon Sancho, are having. All of them made the next step in their career and are ready for a big move next summer. But what about other rising stars of the Bundesliga? While attention is mostly paid to the stand-out performers, we tend to overlook a plethora of youngsters, who have fallen beneath the radar, yet still have the potential to flourish or already do.

The easiest way to examine the attacking contribution is through players shooting and their ability to create chances. This can be measured by Expected Goals (excluding penalties) and Expected Goals Assisted through data from fbref and whoscored. In order to receive more meaningful results, I excluded players that have played less than 900 minutes. 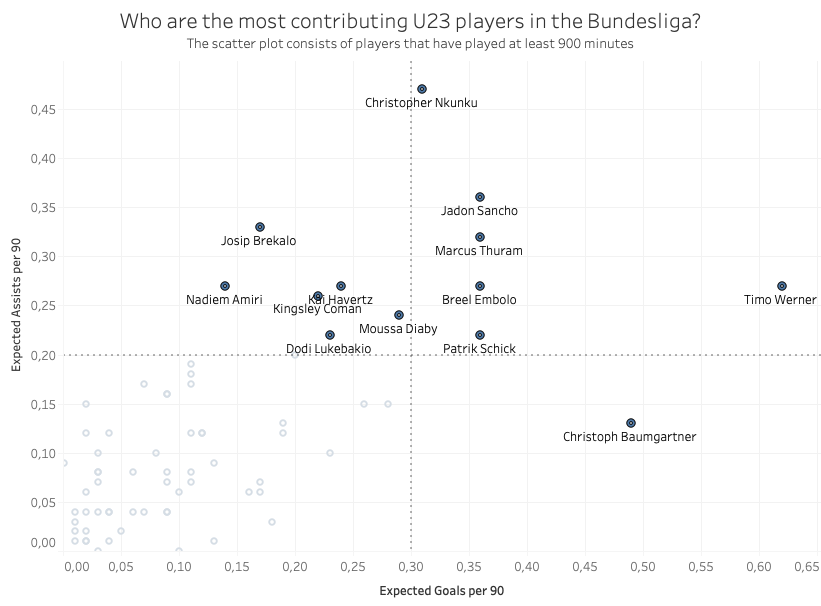 As we can see, Timo Werner and Christopher Nkunku are apparently the absolute high-flyers when it comes to Expected Goals and Expected Goals Assisted respectively. Besides them, you would have expected Borussia Dortmund‘s Jadon Sancho and Bayern Munich linked Kai Havertz to have good numbers as well. But did you know that Christoph Baumgartner averages the second-highest xG-value per 90? Or that Breel Embolo has recovered so well from his disappointing time at Schalke amassing 0.63 Goal Contribution per 90 this season? In the next few sections, we will dig deeper into the data and capabilities of four players that stand out.

Christoph Baumgartner was the biggest surprise to me in this list, playing in a weird Hoffenheim team with many questionable lineups. While the discussions with Hoffenheim usually revolve around the positions of individual players, such as whether Robert Skov shouldn’t play as a left-winger instead of left-back, Baumgartner has quietly become a regular starter for Alfred Schreuder’s side. The 20-year-old usually starts as an attacking midfielder and has put up some impressive numbers.

Apparently, the Austrian really, really likes to shoot. He ranks 6th  for most shots per 90 in the Bundesliga overall and 8th across U23 players in Europe’s top five leagues. It looks similar for Expected Goals as he ranks 6th in the Bundesliga and 7th  in Europe. However, he not only excels in taking tons of shots but also in taking smart shots, which is in many ways unusual for a 20-year-old. 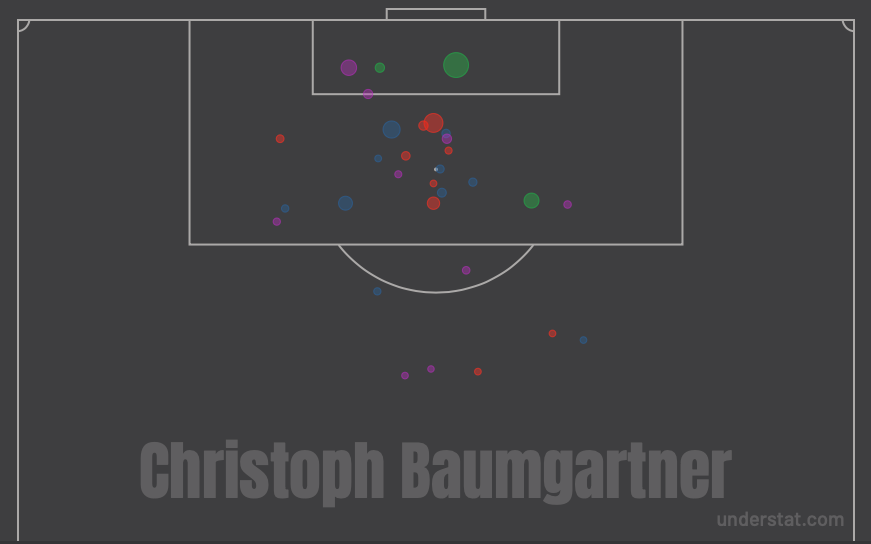 Considering his very young age and the early stage of his career, we can only review a small sample size of Baumgartner. While there’s a lot to say that the Austrian is a talented attacking player, it has to be seen whether he can keep up his shooting and Expected Goals numbers and further improve other areas of his game, e.g. the playmaking.

I’m a Schalke fan, so Breel Embolo is a really difficult topic in many ways. It was always obvious that this guy has valuable qualities, but his performances were just … too inconsistent to put it mildly. Sometimes it seemed like the football god throws a coin for every action of him to decide whether it’s successful or not – no matter if it is a simple pass or a long-range shot from 30 metres.

However, since his move to Gladbach, he has significantly improved in almost all areas of his game and his numbers look extremely good. Adding up his xG and his xG Assisted, Embolo ranks 8th amongst U23 players in Europe’s big five leagues above players like Lautaro Martínez for instance.

One of the Swiss’ internationals most valuable capabilities is his explosiveness. He combines elite acceleration with a strength that allows him to be comfortable receiving the ball with opponents in his back. In these situations, he is able to hold the ball up front and evade the opponent to open up space for his teammates.

Nonetheless, despite all the praise, the eye test signals that Embolo is still a bit sloppy from time to time with his first touch and in his decision-making which leads to easy and avoidable mistakes. However, after a long time, he is finally constantly healthy and in top shape again so that we can expect further improvement in the future.

For years, the Croatian winger was considered a crown jewel and a future superstar. However, the 22-year-old could never keep up to the expectations since he joined Wolfsburg in 2016 for €10 Million. That being said, things seem to have slightly changed over the last couple of months as Brekalo has established himself as a regular starter under coach Oliver Glasner.

When looking at his statistics below, the numbers that stand out are his xG assisted and his passes into the penalty area. In the tactics of Oliver Glasner, Brekalo is the most creative player and therefore, has to carry a big burden, frequently acting as a playmaker.

In terms of playing style, the Croatian likes to receive the ball on the left side, start dribbling inside to either find a teammate or opt-in for a long-range shot. He’s very confident in tight spaces and knows how to evade the opponent’s pressure.

Additionally, he doesn’t limit himself to only one move but also shows some level of diversity in the way he creates chances. Instead of always drifting inside, Brekalo also possesses a decent left foot allowing him to move down the flank. Alternatively, he likes to position himself in the middle of the pitch to create numerical superiorities or support the other winger on the right side.

However, although his output increased, his shot selection is still somewhat questionable as he almost never hesitates to shoot from long-range. If he can revise this part of his game, he might end up becoming an impact player at an ambitious club. 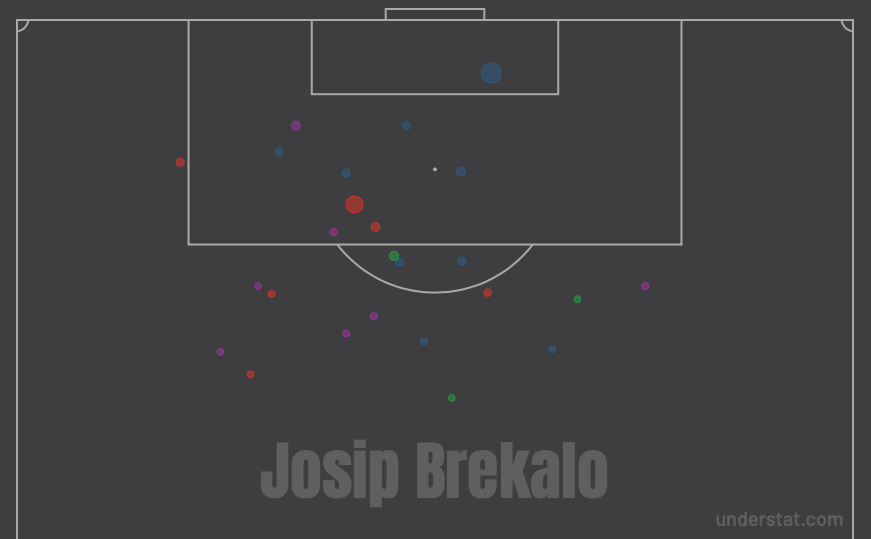 Rounding up this analysis, there is Marcus Thuram who is probably the most exciting player from those we discussed. Sporting director Max Eberl bought him for only €9 Million last summer – likely the biggest bargain of the season as he already tripled his value.

Depending on Marco Rose’s system, Thuram plays as an inverted winger on the left side or as a central striker in a 4-4-2 diamond shape. Similar to Brekalo, Thuram likes to receive the ball on the left side, start dribbling and move inside. A lot of his chances emerge in exactly that way. After receiving the ball on the left, the 22-year-old carries the ball towards the box and connects with a teammate or looks for a shot himself.

Looking at his numbers, we can see some extraordinary figures. While Thuram was expected to score a bunch of goals, it was difficult to envision him as a prolific chance creator as he has never been anything like that in his career. However, at Gladbach, he averages an outstanding number of 0.32 xG Assisted per 90.

His Expected Goals Assisted might be an indication of how well he links up with his attacking partners Embolo and Plea but also of his unique skillset. Marcus Thuram is just a complete package combining acceleration, speed, strength, shooting skills and ball control.

As this data analysis has shown, there are some more very exciting young players in the Bundesliga apart from the likes of Timo Werner or Jadon Sancho. Bundesliga clubs are letting their talents play, which allows them to develop in a highly competitive league. Even if some of these guys are going to leave next summer – players like Giovanni Reyna, Joshua Zirkzee or Paulinho are already in the pipeline ready to step up.

PS: Further players you should have on your radar who didn’t make the list due to a lack of playing time: Joshua Zirkzee, Erling Haaland, Giovanny Reyna, Matheus Cunha, Leon Bailey, Paulinho and André Silva.