Spain have not succeeded in recent national tournaments. The most recent failures were being eliminated in the last 16 in the 2018 FIFA World Cup and not qualifying for the final four of the last UEFA Nations League. However, Spain are bringing in a new generation of young exciting players, such as Ansu Fati from Barcelona, Ferrán Torres from Manchester City and other La Liga players. These new players will hope to do well in this year’s UEFA Nations League.

On the other hand, Switzerland have done well considering they are still not an elite European football nation. They went out in the last 16 of the World Cup too, but for them it may be more acceptable, given they haven’t made it to the quarter-final of the World Cup since 1954. However, they reached the final four of the UEFA Nations League last year. This was a great success as they managed to beat Belgium, who currently sit at the top of FIFA’s world rankings, to get there. Right now, they sit in the last place of their group so they have to be careful not to go down to Group B.

The game ended in a 1-0 win for Spain but it was a hotly contested match. Switzerland have been one of the only teams to pressure Spain high and for some moments of the game, they were doing well. They had their chances but Spain dominated possession and due to a mistake in their build-up, they conceded the goal. 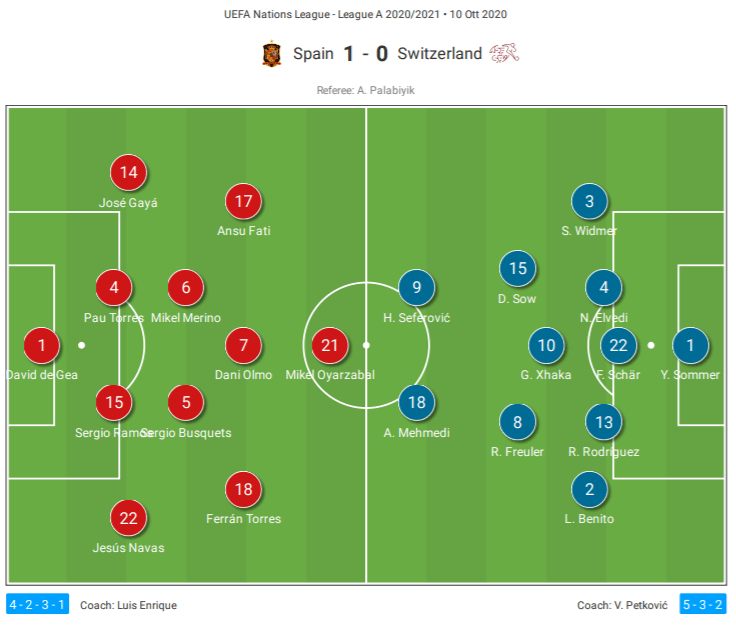 Spain played the whole game in a 4-2-3-1. The back four for Spain was a mix of young and old players. The young players were Jose Luis Gayá and Pau Torres while the veteran players were Sergio Ramos and Jesús Navas. In front of them were the two defensive midfielders Sergio Busquets and Mikel Merino, with Dani Olmo being attacking midfielder. On the wings were the exciting talents Fati and Torres, connecting with another young star Mikel Oyarzabal.

Meanwhile, Switzerland started with a 5-3-2 which offered its strengths and weaknesses as we will see later on. Ricardo Rodriguez played as a centre-back even though his natural position is left-back. Making up the rest of the defence was Loris Benito, Fabian Schär, Nico Elvedi, and Silvan Widmer. The three midfielders were Djibril Sow, Granit Xhaka, and Remo Freuler. Then, up front were Haris Seferović and Admir Mehmedi.

The highlight of the majority of the game was how both teams pressed each other high. It is not very common for a team to press Spain high as they are very good in the build-up and can cause danger if they break out of the pressure. However, Switzerland decided to do so for some moments of the game and for the rest, they positioned themselves a bit lower but never in a low block.

Their method of pressing was trying to make sure that Spain did not build-up towards the middle as it is where they could cause the most danger. Therefore, they tried to divert them to play to the wings.

As we can see in the image below, the two strikers are disrupting the two centre-backs and the goalkeeper. Meanwhile, the two centre-midfielders who are coming in to support are being man-marked. Additionally, it is clear that Spain’s right-back is free which Switzerland allow.

They do this because when the right-back receives the ball, the three midfielders can just position themselves to that side and balance the team again. 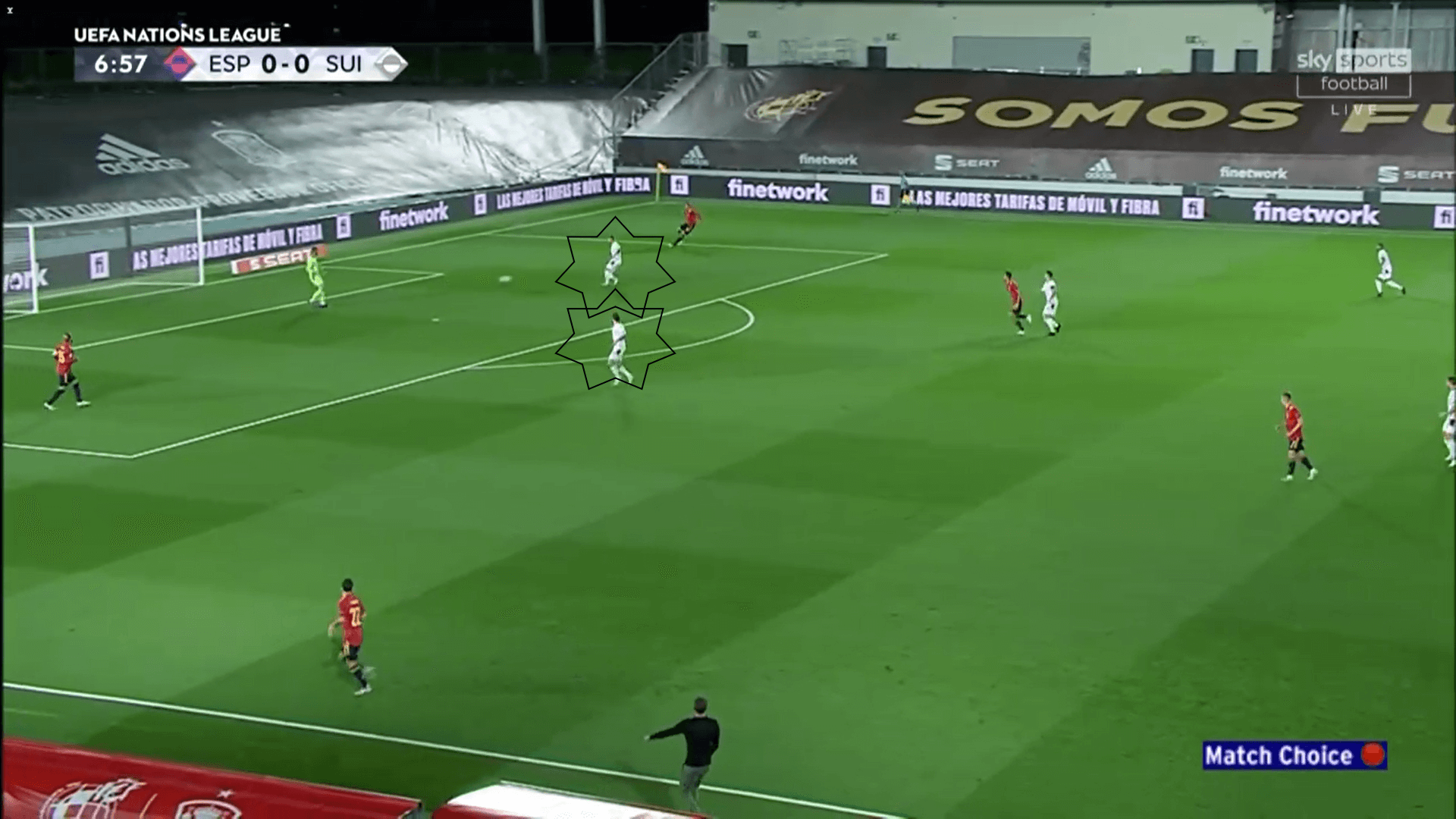 In other parts of the game, they produced an even more aggressive pressure as this time, they made the wing-backs come up to mark Spain’s full-backs. Therefore, now instead of letting them play to the wing, they did not want Spain to play the ball out at all.

As we see here, the pressing system is the same but now their left wing-back has come up to press. Now Spain’s right-back cannot advance like in the previous image. This shows that Switzerland was changing between its pressing intensity depending on the moment of the game. Now it is more aggressive as essentially every player is being man-marked. 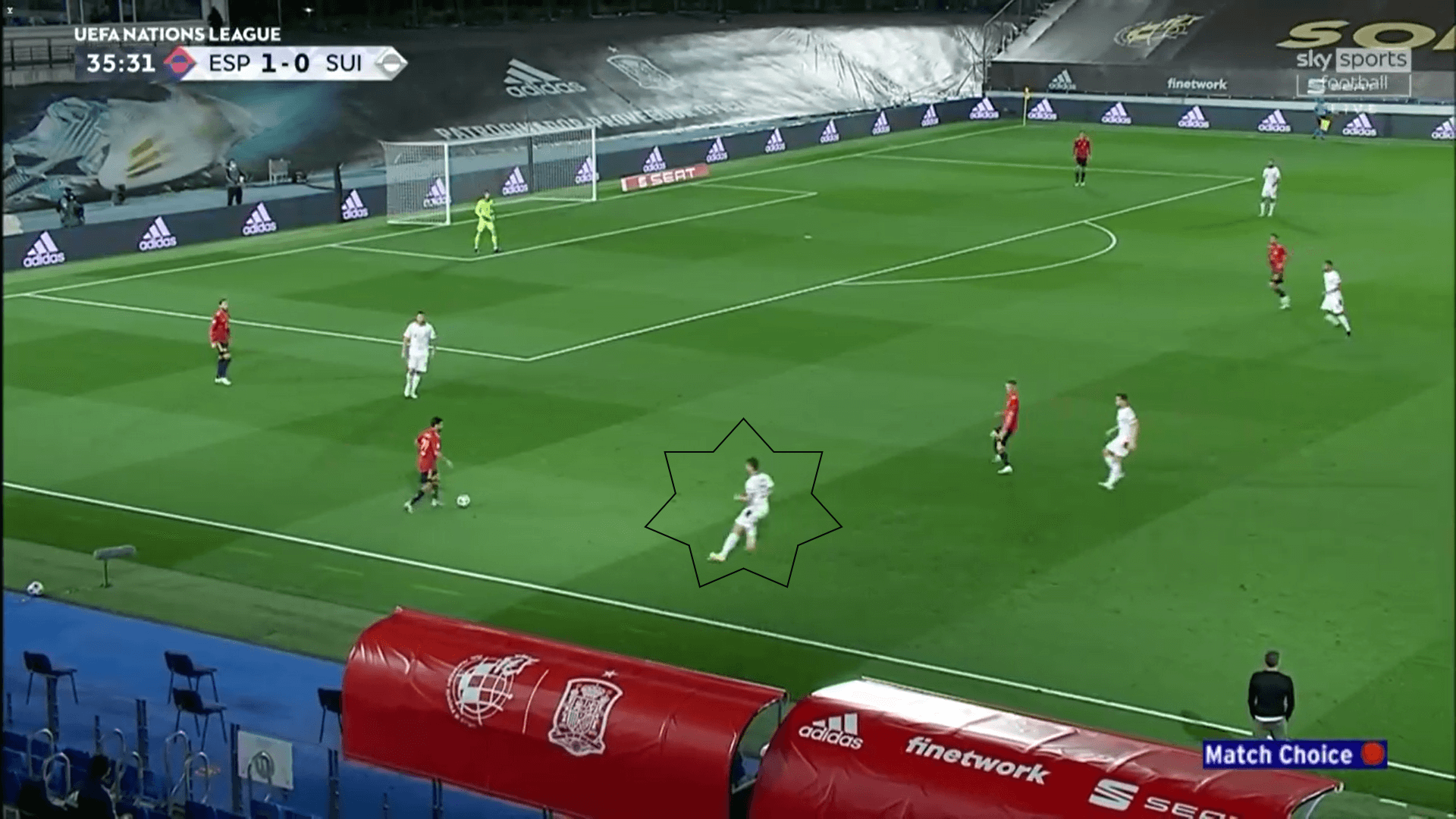 There were other points of the game where they dropped back more and it became clear why they chose the formation of 5-3-2. They chose this to combat Spain’s midfield of three who are their main assets in the possession of the ball which is the key strength of this Spanish team.

Having the same number of midfielders as Spain would make it tougher for Spain to dominate possession in the midfield. For this, they sacrificed having wingers. 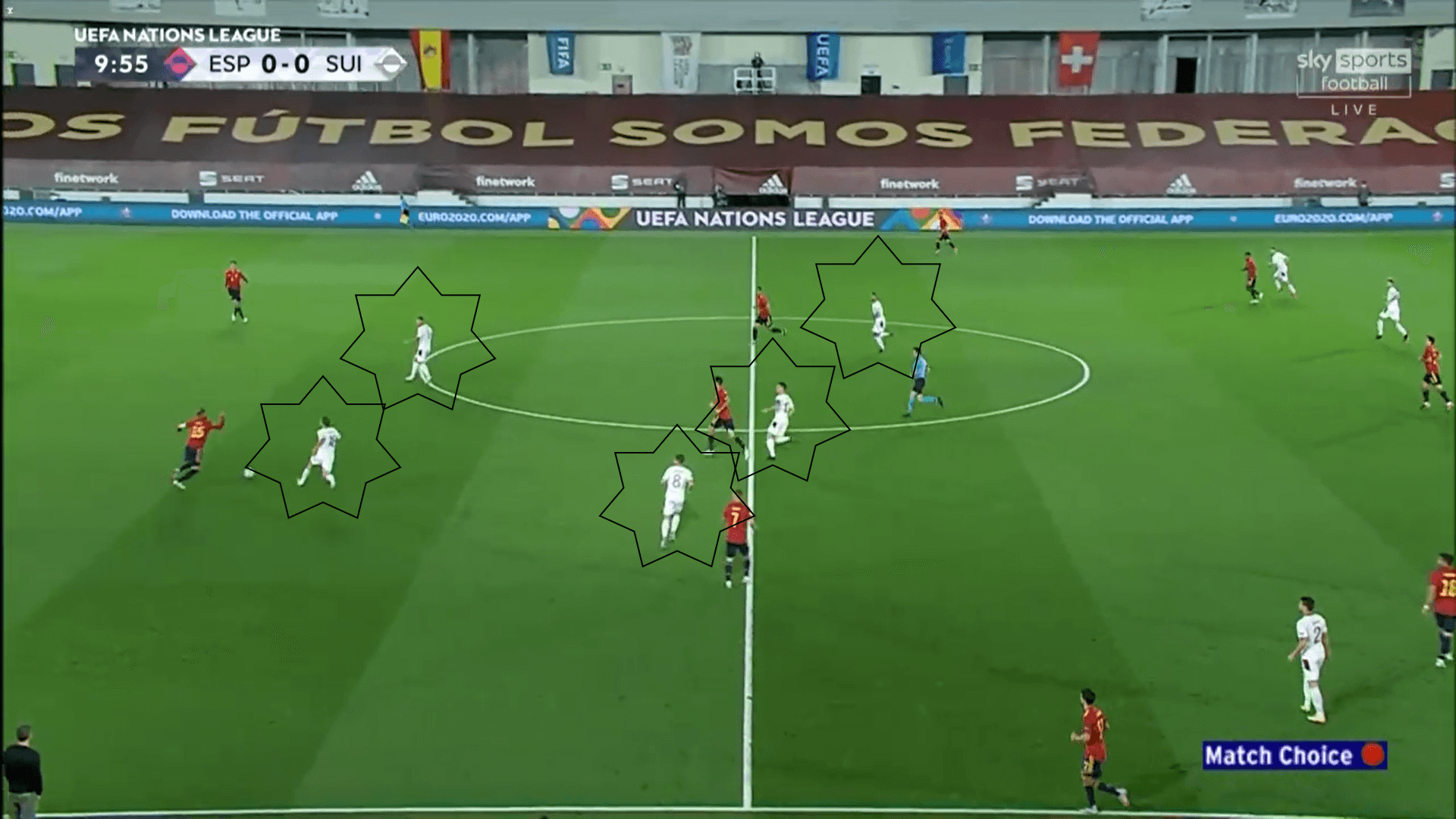 Spain are known to press high as they want the other team to kick the ball out as soon as possible to regain possession and start another attack. Additionally, they know that their centre-backs are powerful in the air and so long balls can be dealt with.

Spain pressed even higher than Switzerland, sometimes doing so in the opponent’s box. This was to encourage the Swiss goalkeeper to kick the ball out. In the image below, it is clear that the striker and attacking midfielder are pressuring both centre-backs. After, Busquets is coming to mark a Swiss centre-midfielder who has come to support and then one winger is with the remaining centre-back, while Ansu Fati marks the right wing-back.

Throughout the game, their high press was effective, and their only goal actually came from recovering a misplaced pass from the goalkeeper near the area. 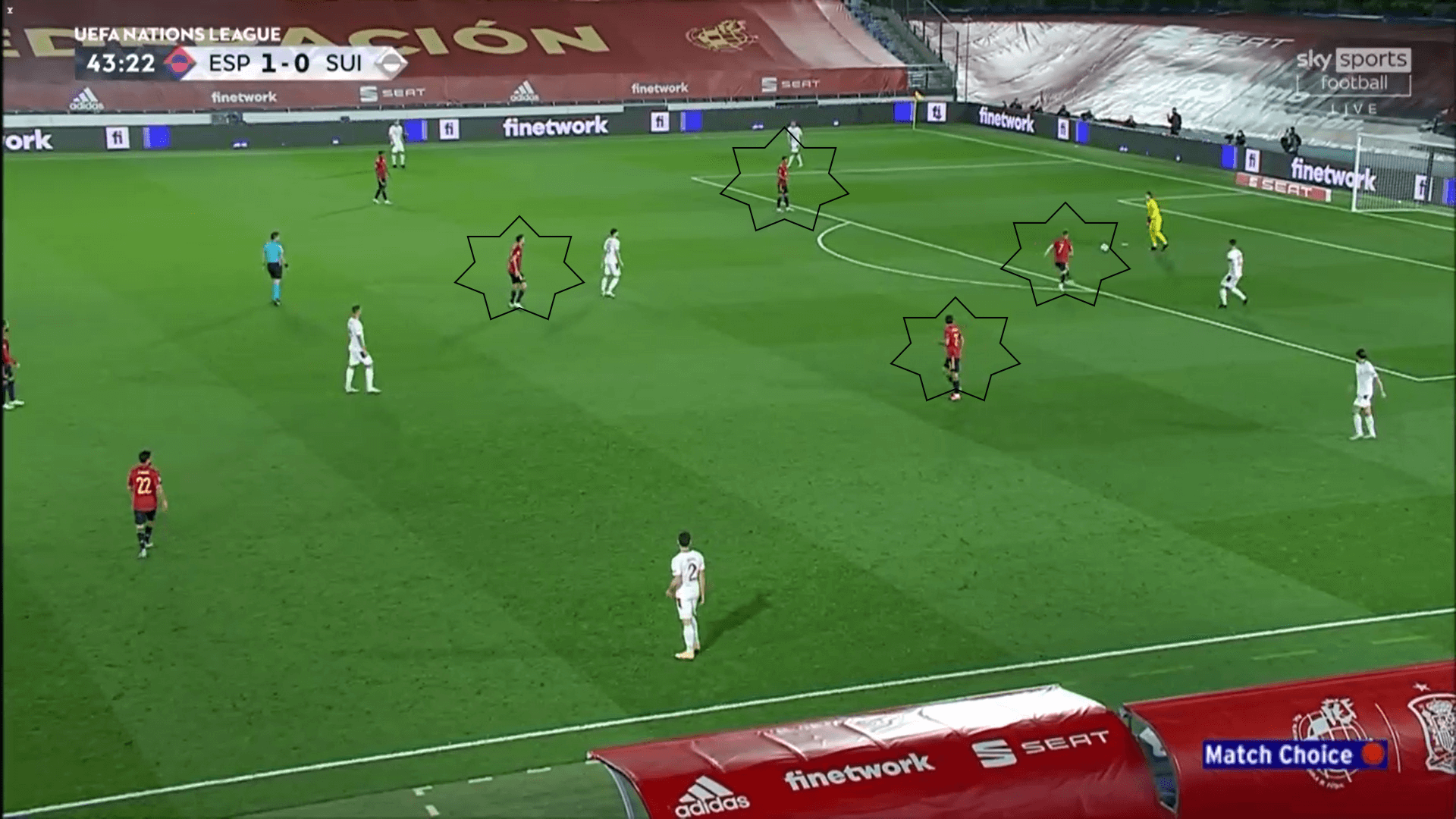 As well as pressing high, Spain performed a high-intensity counter-pressing system after losing the ball. They want to maximise their time on the ball and so as soon as they lose it, they aim to recover as quickly as possible. If done well, it is very effective but if the opponents break through the pressure, there are many spaces left behind to attack.

For example, in the image below they had just lost the ball and are now surrounding the player in possession to cut his passing options and so try to recover the ball. 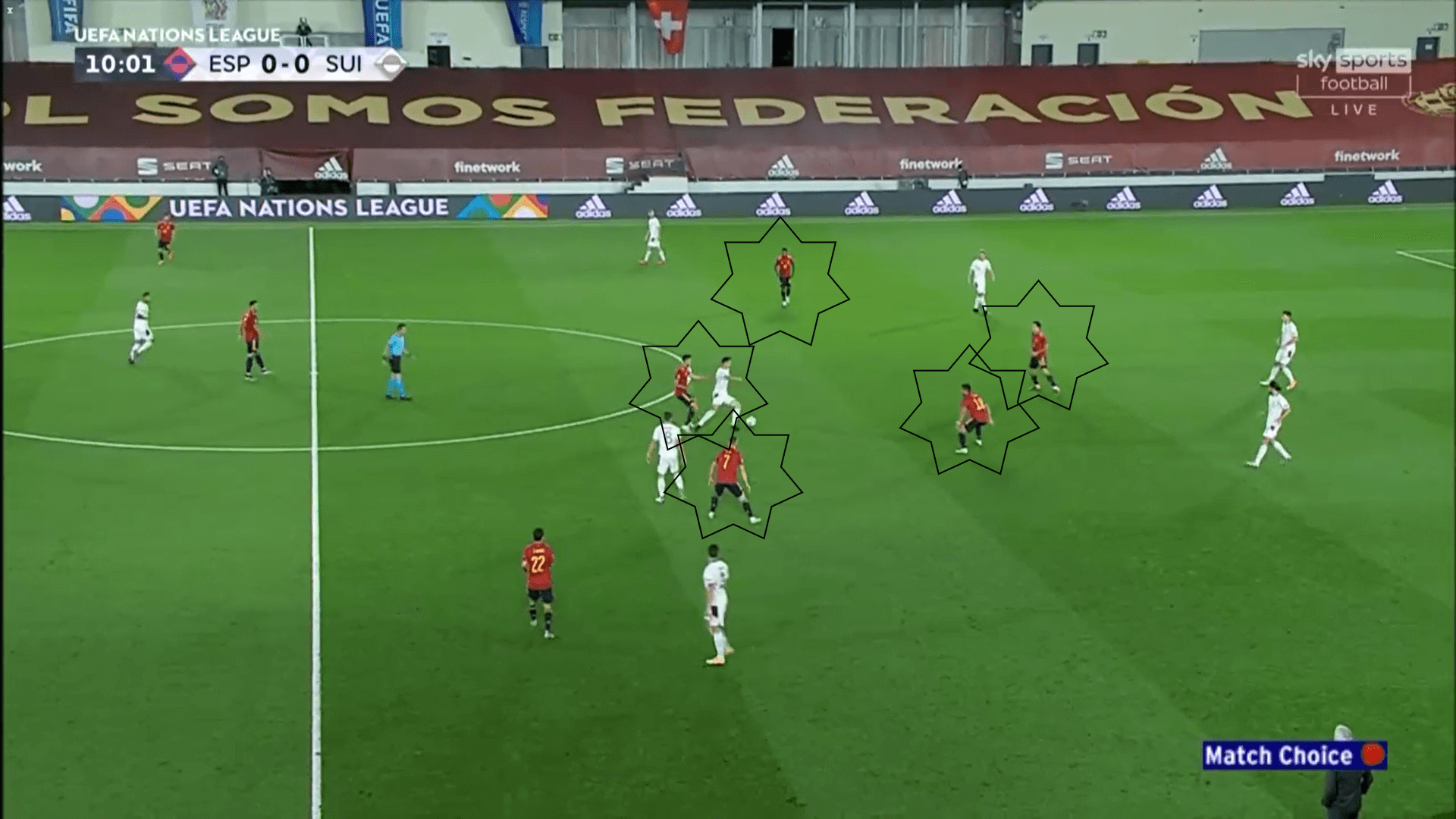 We have talked about why Switzerland used a 5-3-2, to combat Spain’s midfield. However, now we will focus on the downsides of this formation. Firstly, there are no wingers which means that when Spain attack on the wing, they generate a 2 vs 1 against the wing-back which can be dangerous.

Usually, the nearest player of the midfielders comes to help but if he is far, one of the centre-backs must support and this can disrupt the whole defence. In the situation below, the Swiss wing-back is marking the Spain right-back who is out wide. This leaves the Spain right-winger alone as the Swiss midfielder is arriving late.

Therefore, this gives the right-winger time to make a dangerous pass behind the defence. If there had been a winger, there would have been someone marking this player. 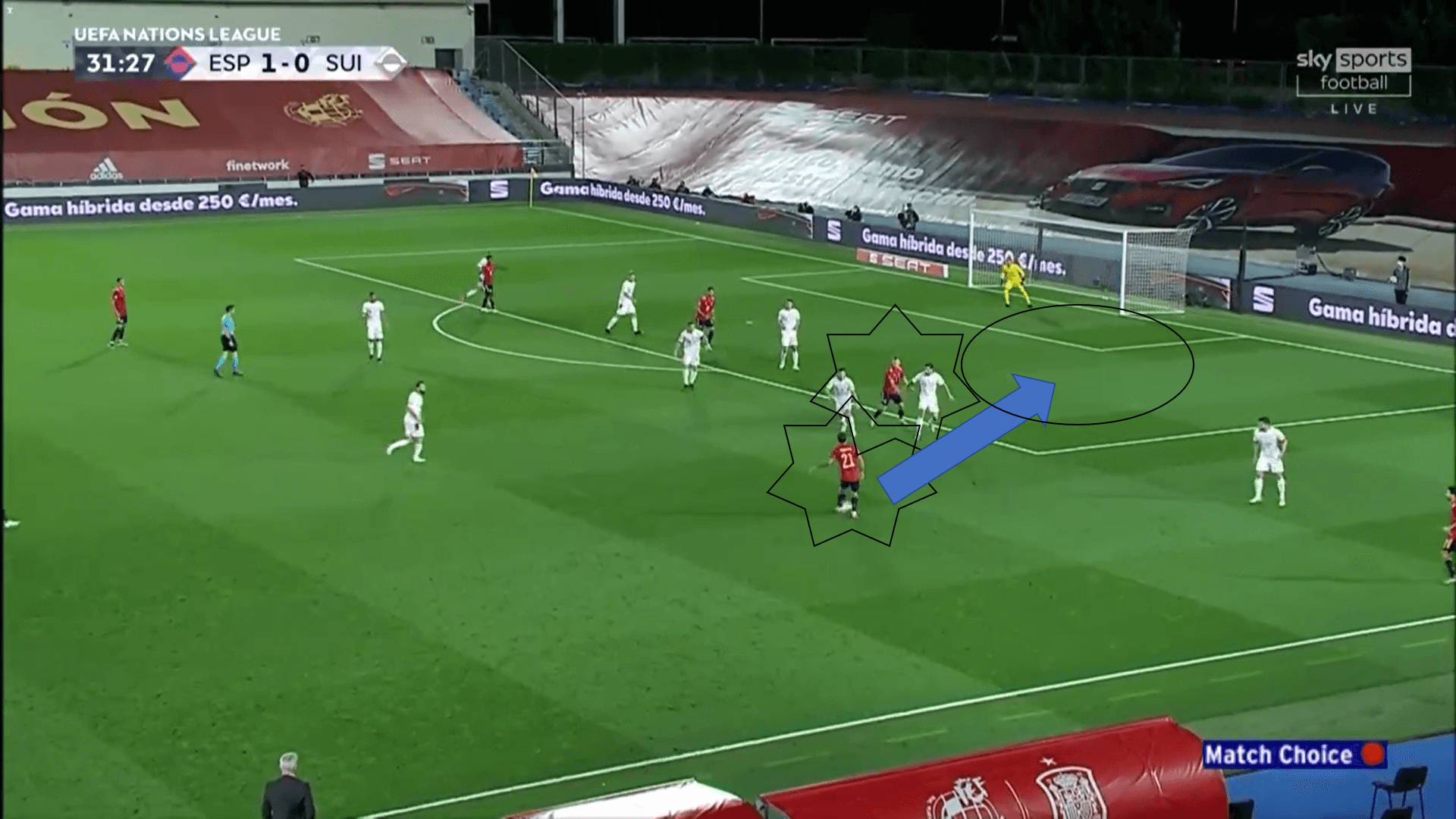 There is another disadvantage to not having wingers that Spain exploited. Since it is a midfield of three players, they have to shift from side to side all the time and after some time, they start getting more and more tired. Since Spain has attacking full-backs, it meant that there were always players to the sides of the midfielders.

Spain took advantage of this and started switching the ball to the other side. This would leave the Spanish full-back with time to control and space to run into. At the same time, the Swiss midfield had to quickly shift to the other side to defend.

In the image below, we observe the space that the left-back is in. Ansu Fati has come inside to make this space even greater. Moreover, it is evident how far the nearest midfielder is to the left-back. 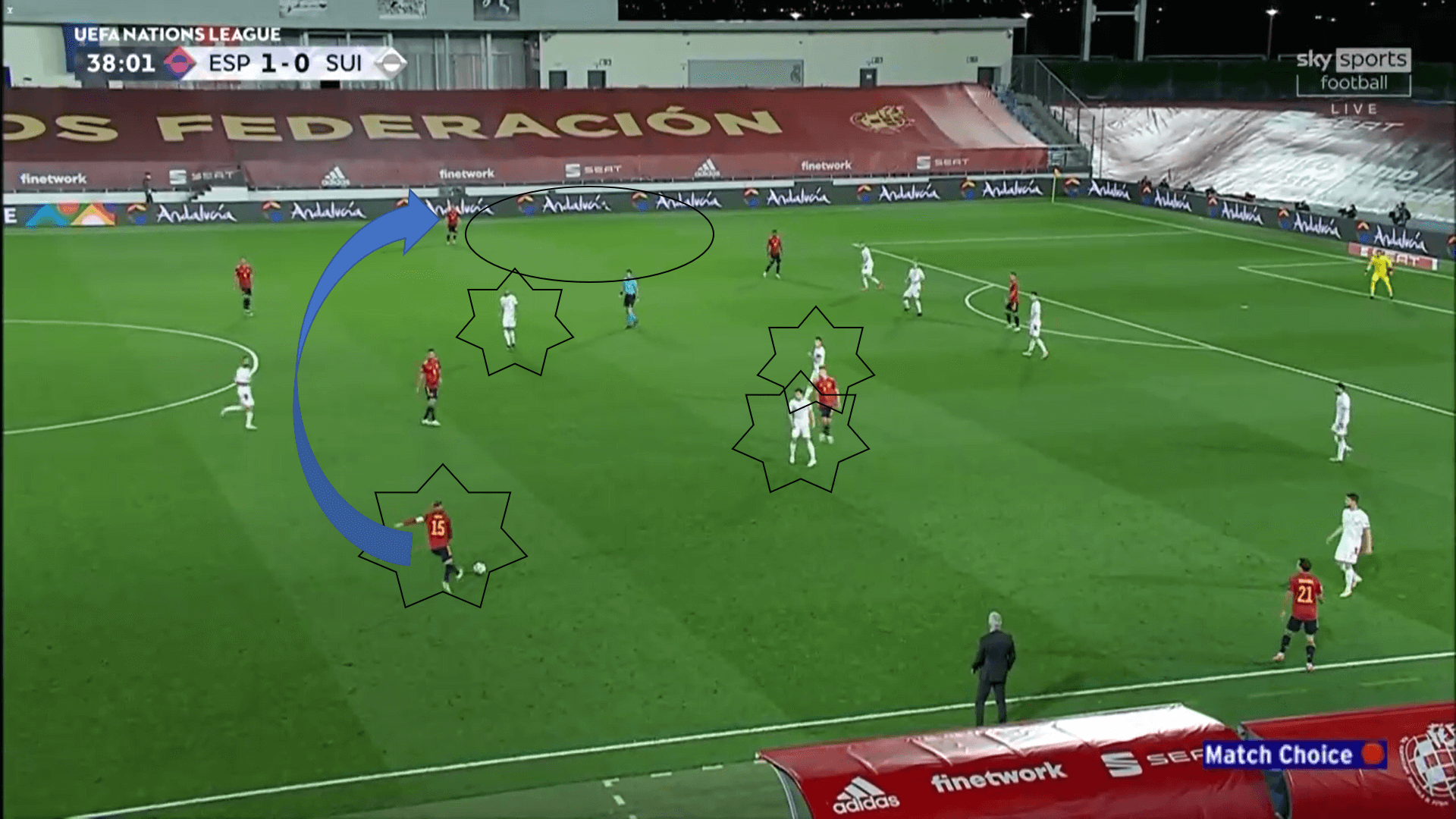 The Swiss coach was very aware of how to attack Spain. With Spain getting many people to attack, they leave spaces behind. The biggest of these spaces is the one left by the full-backs when they go up. This gives the opportunity for a Swiss player to get in this position and take advantage of it.

An example is shown in the image below. The Spanish right-back has just been attacking and Spain lost the ball. The Swiss striker saw the space and moved into it. This created a very dangerous chance for Switzerland. 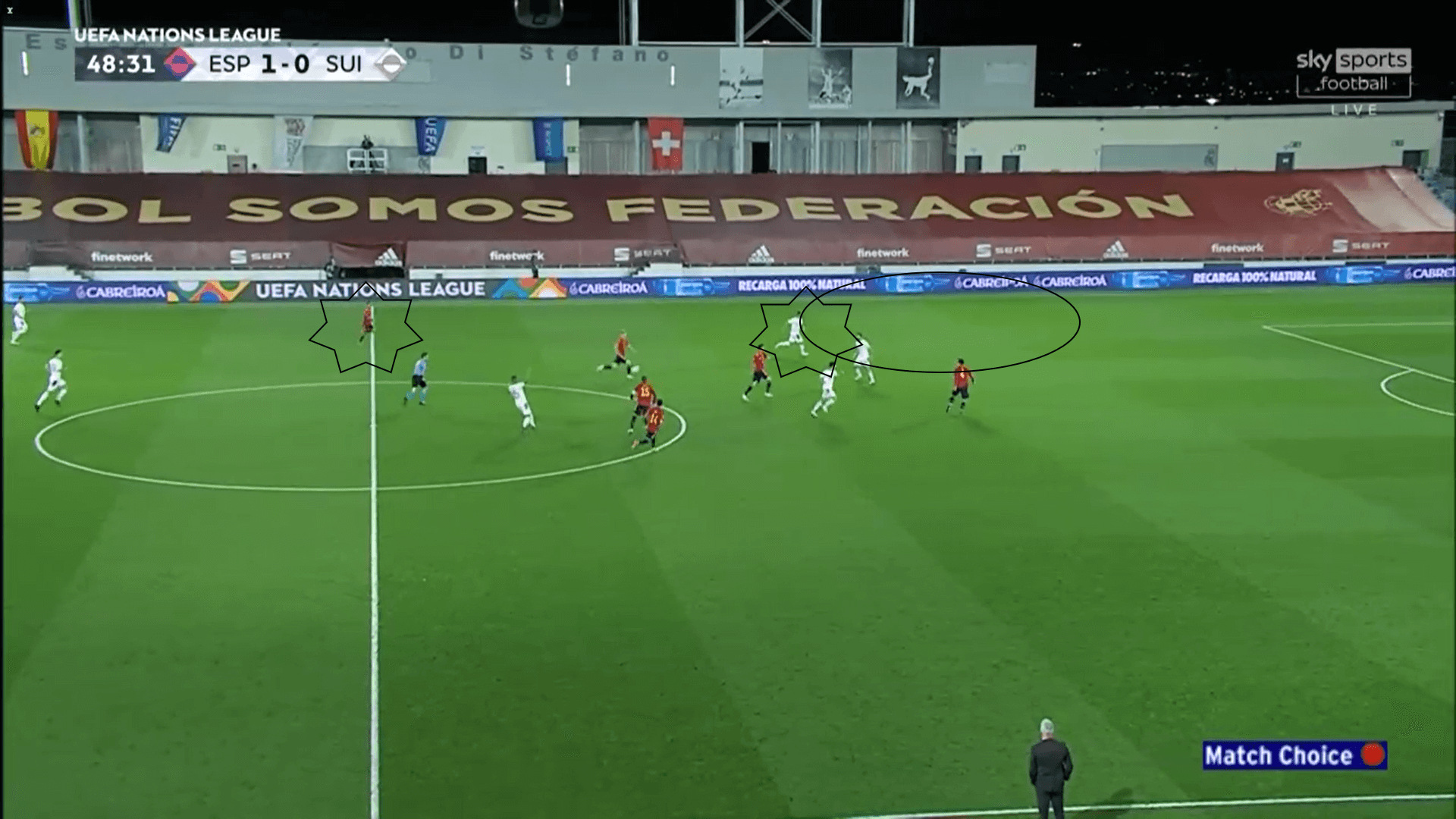 Another way they attacked the spaces in Spain’s defence was knowing that their centre-backs stepped up to defend. Spain’s centre-backs follow their players higher up the pitch than normal to intercept or stop the ball. If they do intercept, it can be very valuable as they can immediately start another attack and catch the opponent by surprise.

However, if he is not aggressive in this duel, he will leave a lot of space behind. This was predominantly done by Pau Torres, the more inexperienced centre-back. He would step up to mark his opponent but Switzerland managed to get the ball through him and now they would have precious space to run into.

For example, in the image below, Pau Torres has stepped up a lot from his defensive line. Had he intercepted the ball, he would have space to run into himself. Nonetheless, Switzerland gets the ball past him and allows for an attacker to run into the space he left and run towards goal. 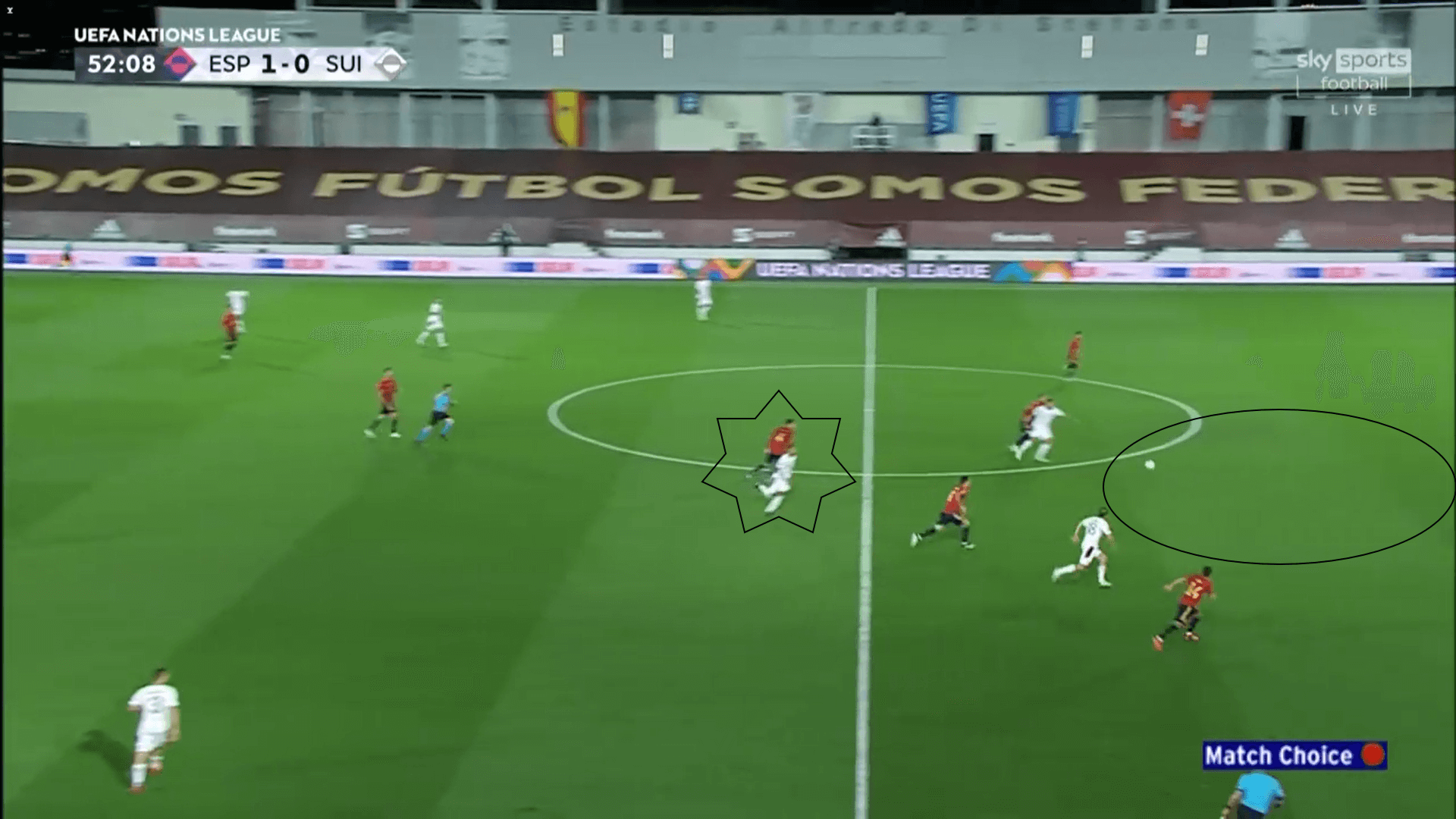 Switzerland used this cunningly as they made the opponent that was with Pau Torres come to receive the ball and take the defender with him while having an attacker make the run in behind.

Overall, it was a competed match where Switzerland was brave enough to press high and try to play out from the back against Spain, who are known for their build-up and effective press. Spain did dominate possession but did not create as many chances as they should have. Also, even if the 5-3-2 formation had disadvantages, the Swiss players physically demanded themselves to make up for the spaces left on the wing.

Now we just have to see if Spain manage to win this group and if Switzerland manage to save themselves from relegation.