The first matchday of football returning to Serie A saw two of the most tactically interesting teams in Italy face off. Atalanta looked to increase their lead in 4th place to secure a UEFA Champions League position, as they are unlikely to realistically compete with the likes of Juventus, Lazio and Inter for the title. Sassuolo looked to consolidate their mid-table position to finish off the season.

In this tactical analysis, I will provide an analysis of the tactics used by Gian Piero Gasperini and Roberto De Zerbi as Atalanta beat Sassuolo 4-1. 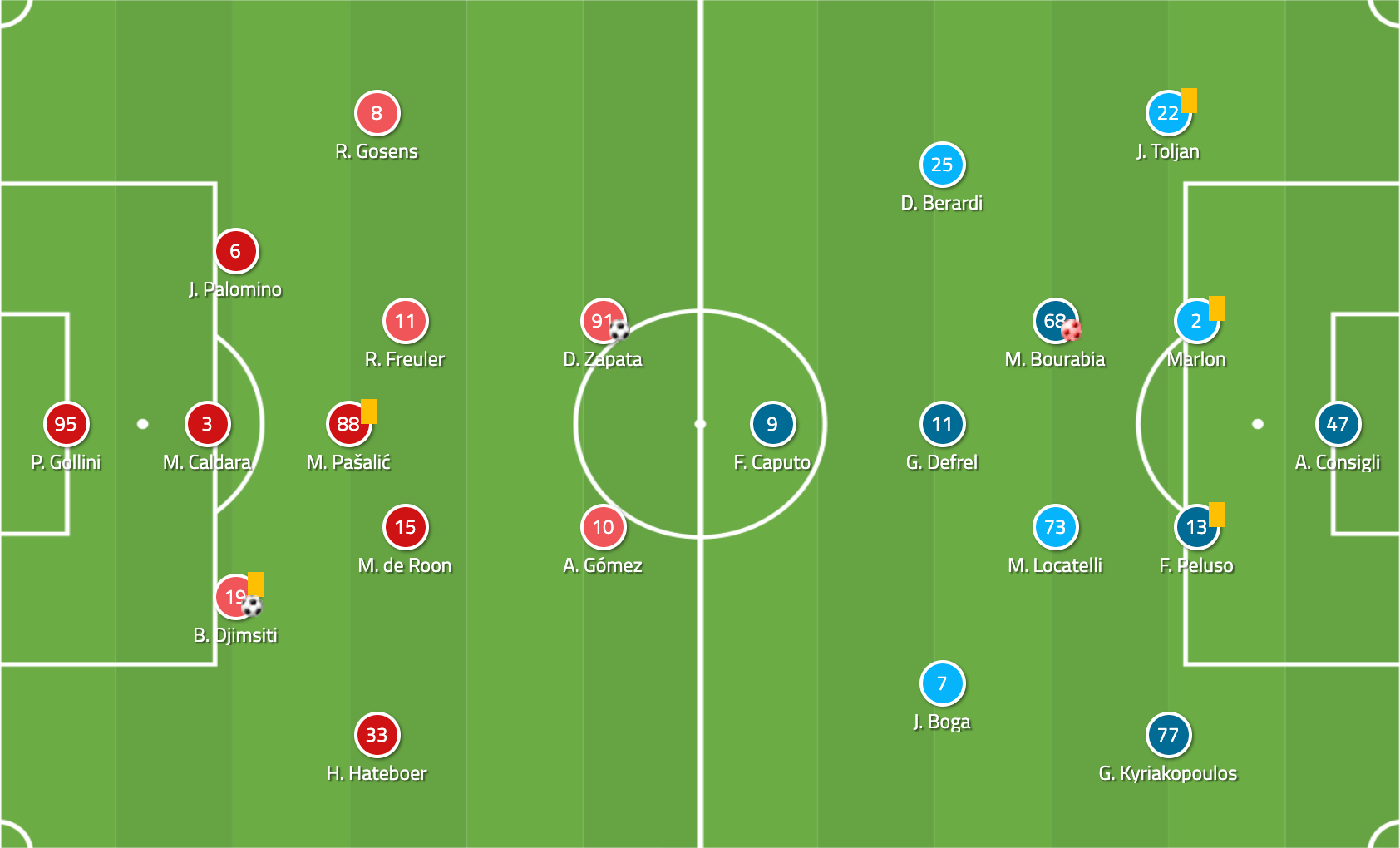 Atalanta lined up with their favoured back three. Pierluigi Gollini started in goal behind a back three of Berat Djimsiti, Mattia Caldara, and José Luis Palomino. Hans Hateboer and Robin Gosens played as wingbacks, while Remo Freuler, Marten de Roon, and Mario Pašalić played as a midfield three, with Pašalić more advanced. Alejandro Gómez and Duván Zapata played as a front two.

Sassuolo lined up in the 4-2-3-1 they have predominantly used this season. Andrea Consigli started in goal. Frederico Peluso and Marlon played as centre backs, flanked by Giorgios Kyriakopolous and Jeremy Toljan. Manuel Locatelli and Mehdi Bourabia played as a double pivot. Jérémie Boga, Grégoire Defrel and Domenico Berardi played just behind Francesco Caputo up top.

Atalanta’s attacking shape naturally creates diamonds in the wide areas, which they make great use of to create numerical advantages. The diamond usually consists of the wide centre back at the base, the wing-back and central midfielder at the sides, and the centre forward at the tip, though this is not absolute. We can see examples of these diamonds vs Sassuolo below. In the first example, we can see the left wide centre back, left wing-back, left central midfielder, and left centre forward creating the diamond.

The diamonds tend to create a 4v3 on the wing in favour of Atalanta. If a 4v4 is created, the advanced midfielder will shift wide to create a 5v4.

In the next image, we can see the diamond created on the right side.

The diamond shown above has different players making up the shape, these rotations are a common theme with Atalanta. They use rotations to drag opposing players out of position and exploit the space created. The most common rotation vs Sassuolo was the centre forward being played wide by the wingback, dragging the near side Sassuolo centre back out of position. Then, the wingback occupies the centre forwards previous position, in space as the centre back has been drawn out by the rotation. Below. we can see a diagram of this rotation occurring, and how it created space for the wingback to occupy. 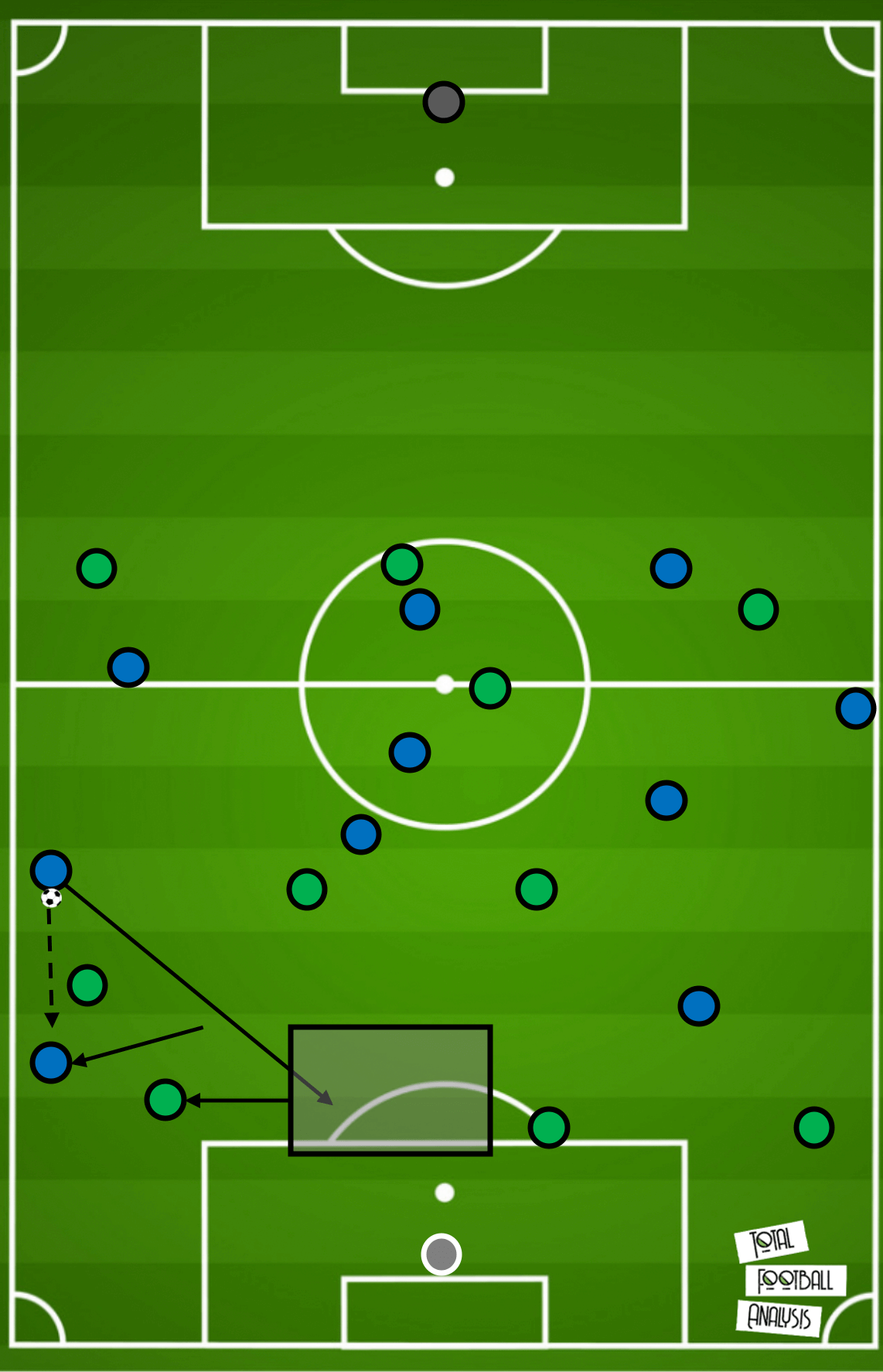 We can see this rotation in action in the example pictured below. The centre forward receives the ball in a wide area, drawing the centre back out, creating space for the wingback to occupy.

Below, we can see another example of this – though all three relevant players (Sassuolo centre back, Atalanta wingback and centre forward) have been substituted. These rotations are so ingrained in Atalanta’s attacking play that the exact same pattern occurs with completely different personnel.

Sassuolo shifted from their starting 4-2-3-1 shape into a 4-1-4-1 mid-block while defending. One of the pivots (Bourabia) stayed behind to form the ‘1’ while the other (Locatelli) pushed forward alongside the attacking midfielder. We can see this defensive shape in the image shown below, the attacking midfielder has dropped off slightly while one of the pivots has pushed up to form a line of four including the two wingers. 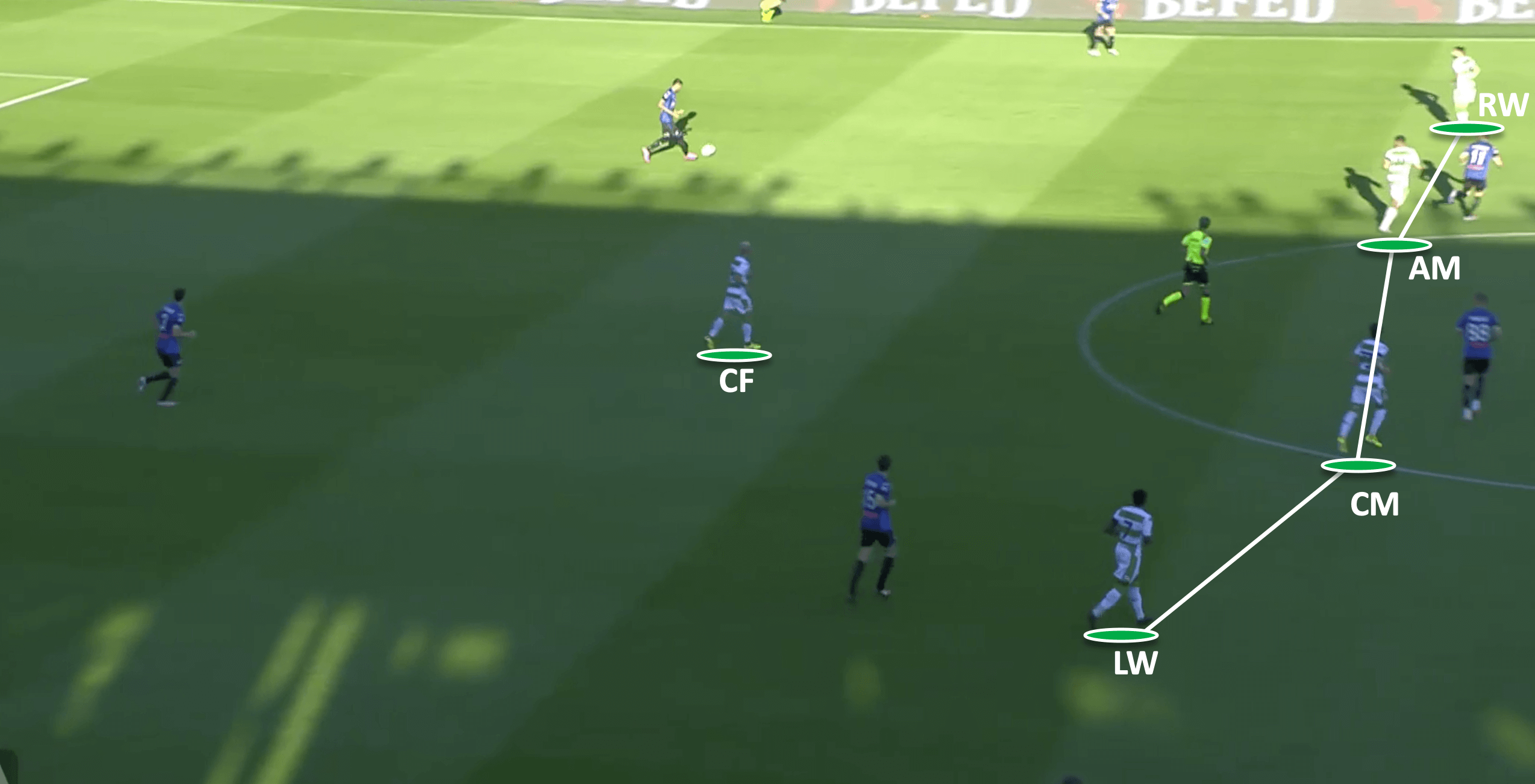 They stayed mostly passive until their main pressing trigger occurred: one of Atalanta’s wide centre backs receiving the ball. When this happened, the Sassuolo winger on the near side would jump out to press the wide centre back, while simultaneously cutting out the passing angle from the centre back to the wing-back. We can see how this works in the diagram pictured below, the winger jumps out as the ball is played to the wide centre back, he presses while keeping the wingback behind him in his cover shadow. 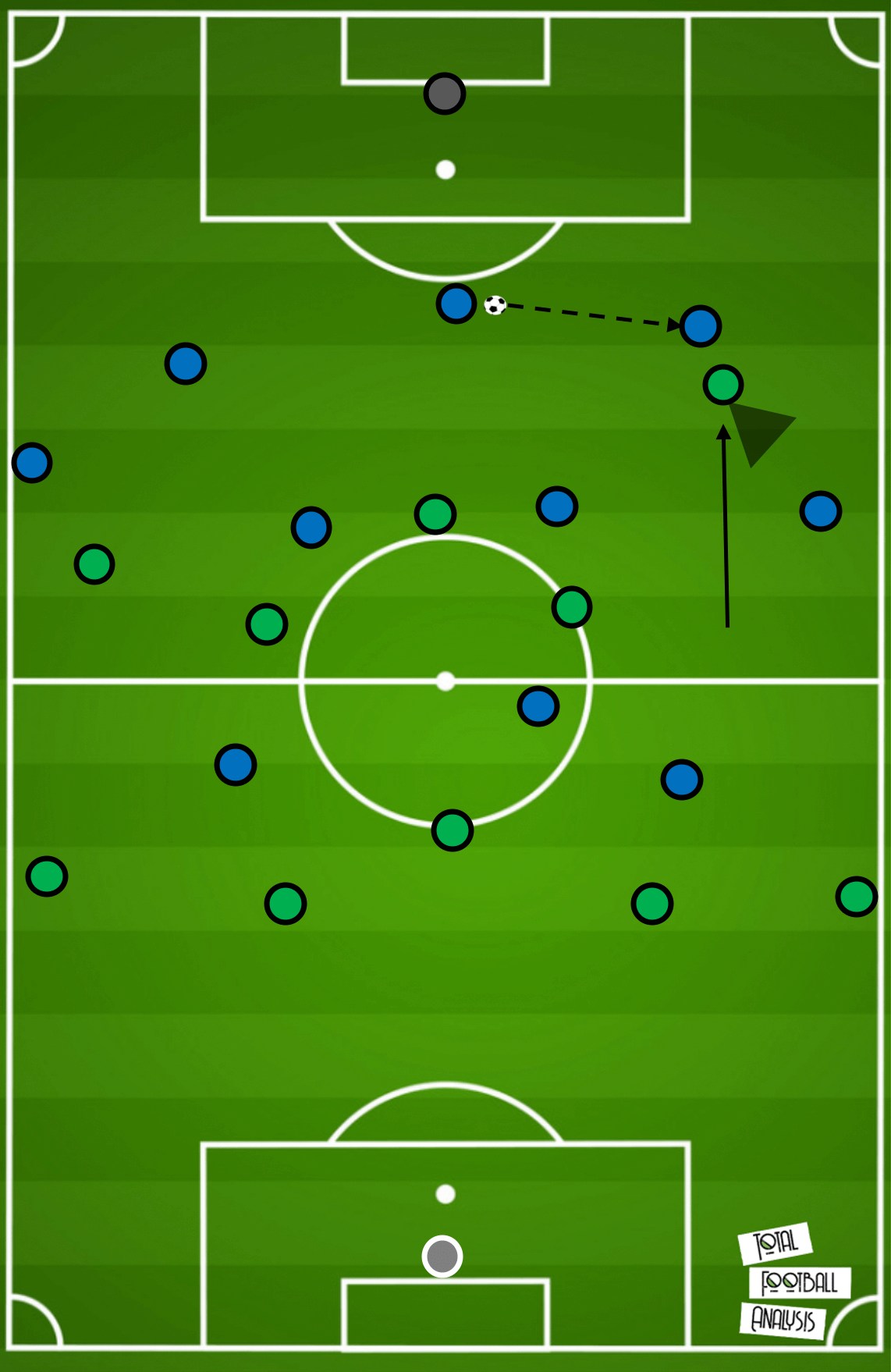 We can see this in action in the example shown below, the right-winger presses the wide centre back as he receives the ball, while preventing the pass behind him into the left wingback.

When a Sassuolo fullback was on the ball, the winger on the near side would drop to provide a short option. Atalanta’s wingback on that side would follow the winger. We can see this in action below, the left-back is on the ball, so the left-winger drops, dragging the opposing right wingback with him. 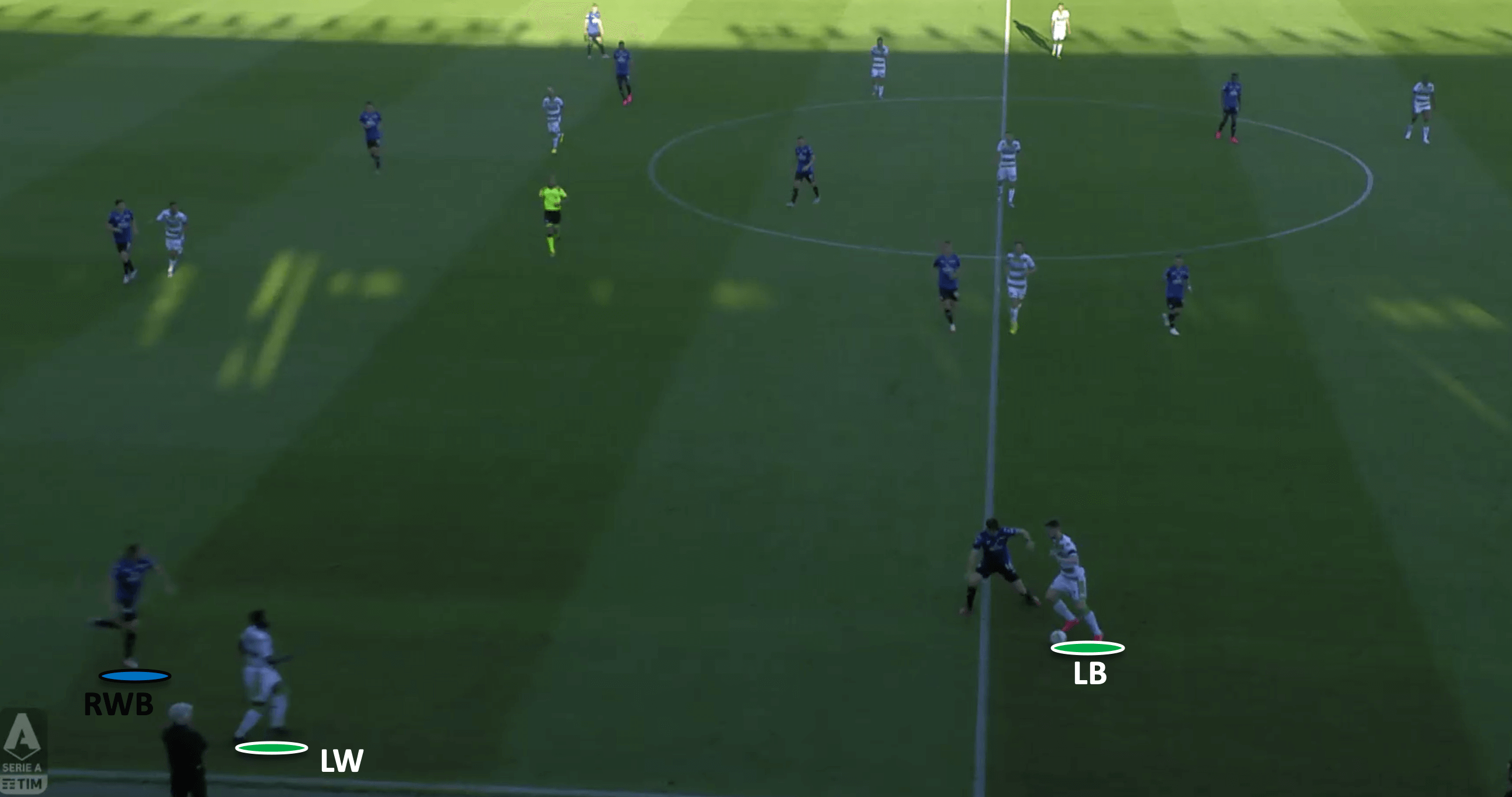 If the ball was returned to the fullback, Atalanta’s wingback would shift their attention to the fullback, this created wide space for the winger to occupy. We can see a diagram of how this space is created below, the wingback begins to press the Sassuolo fullback after originally being drawn forward by the winger. The winger then occupies the space in behind the wingback. 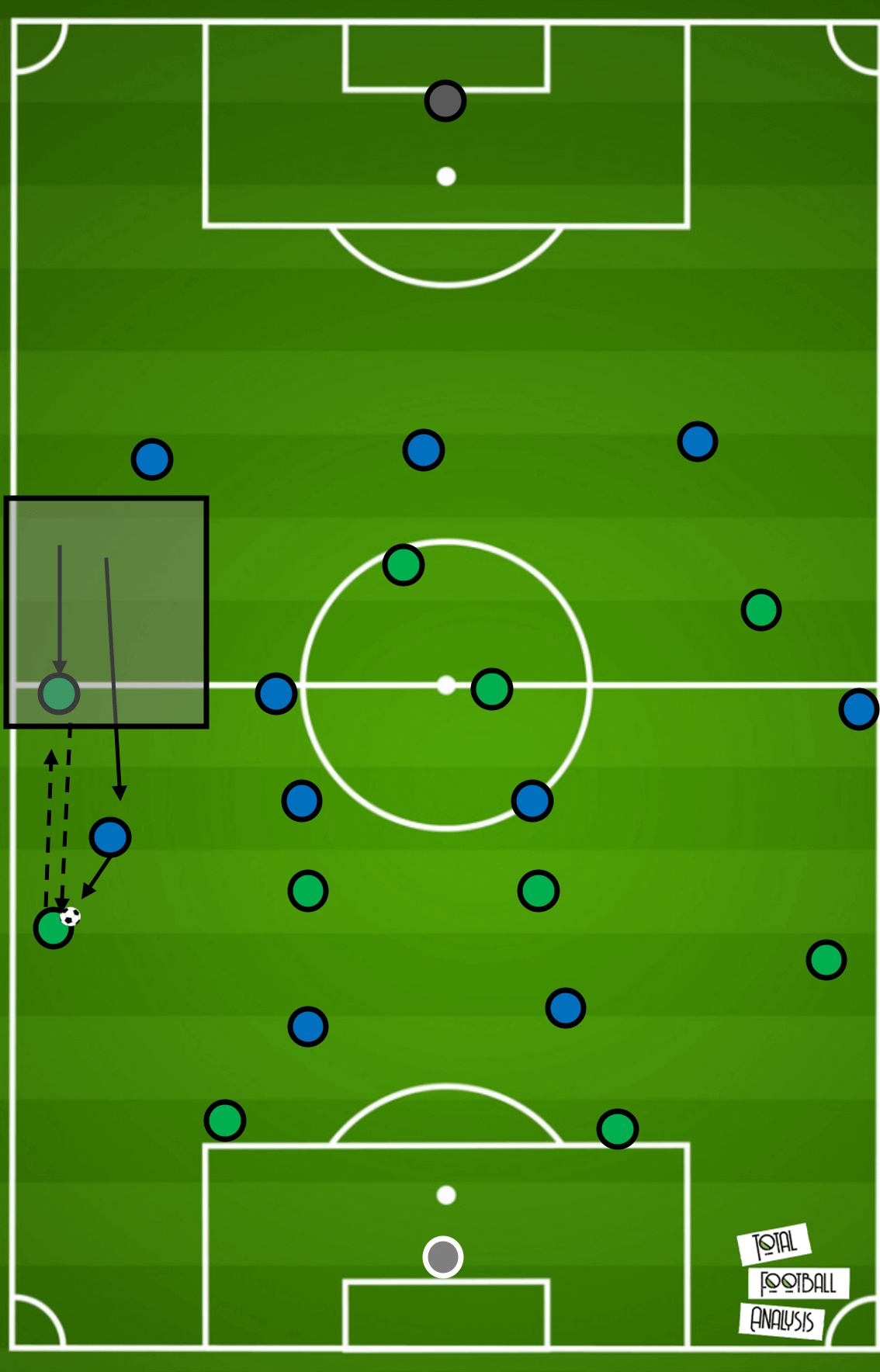 When the ball was on the flank, there usually was a great deal of space in the halfspace on the near side, and Sassuolo made use of this, by occupying it using a player after releasing the ball. We can see an example of this in the image pictured below. The left-back has played the ball to the left-winger and then has occupied the mostly empty halfspace, where he then receives a return pass.

The central midfielder on the near side would shift over to create a triangle which included the winger and fullback on that side. We can see an example of this on the right side, with Sassuolo creating a triangle with the winger, fullback, and nearest midfielder.

Below, we can see an example of this occurring on the opposite side of the pitch.

Sassuolo used their typical build-up structure utilising the back four and the double pivot. The fullbacks stayed deep and wide while the double pivot created a box ahead of the centre backs. We can see a diagram of this structure in the image shown below. 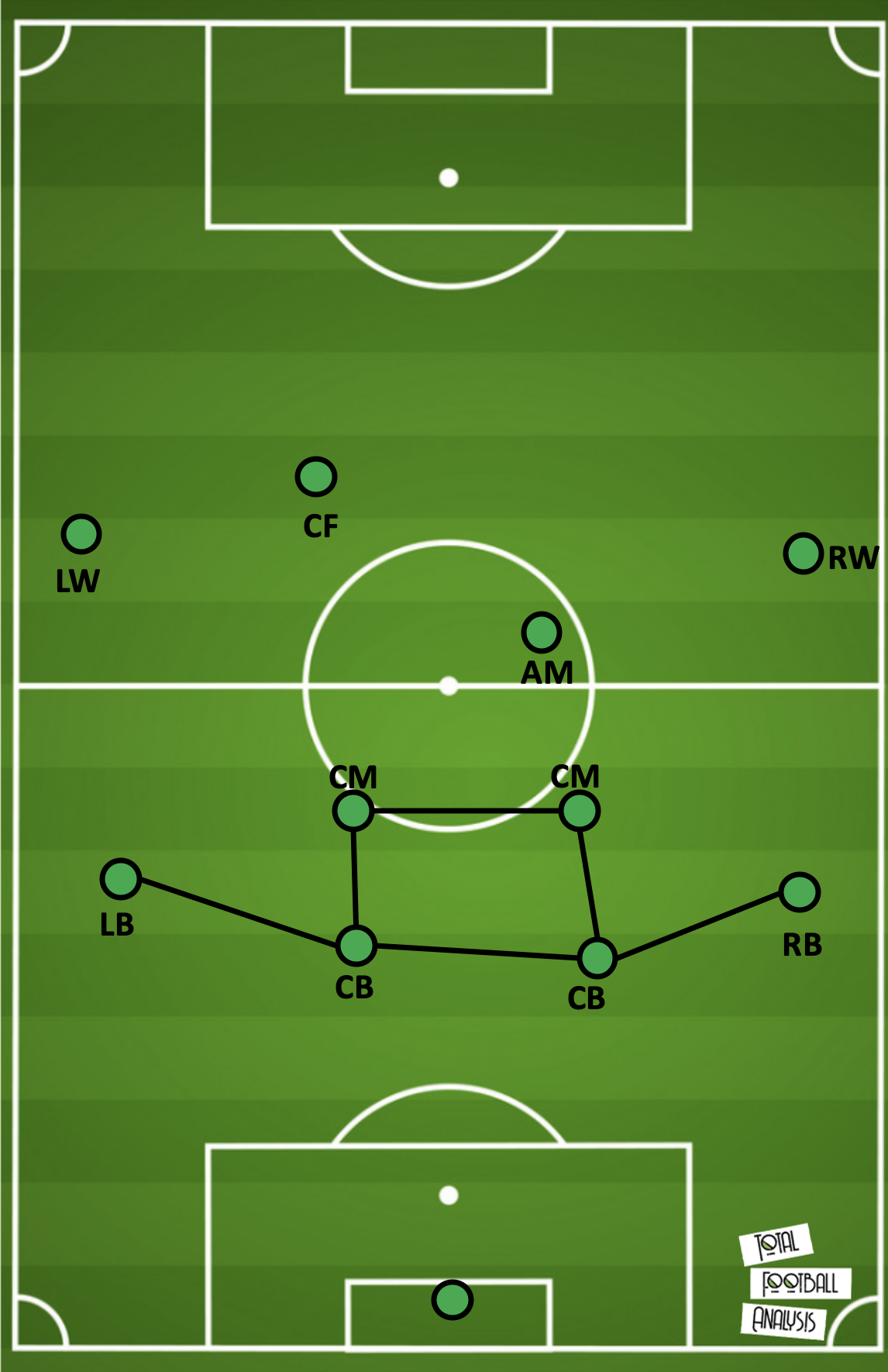 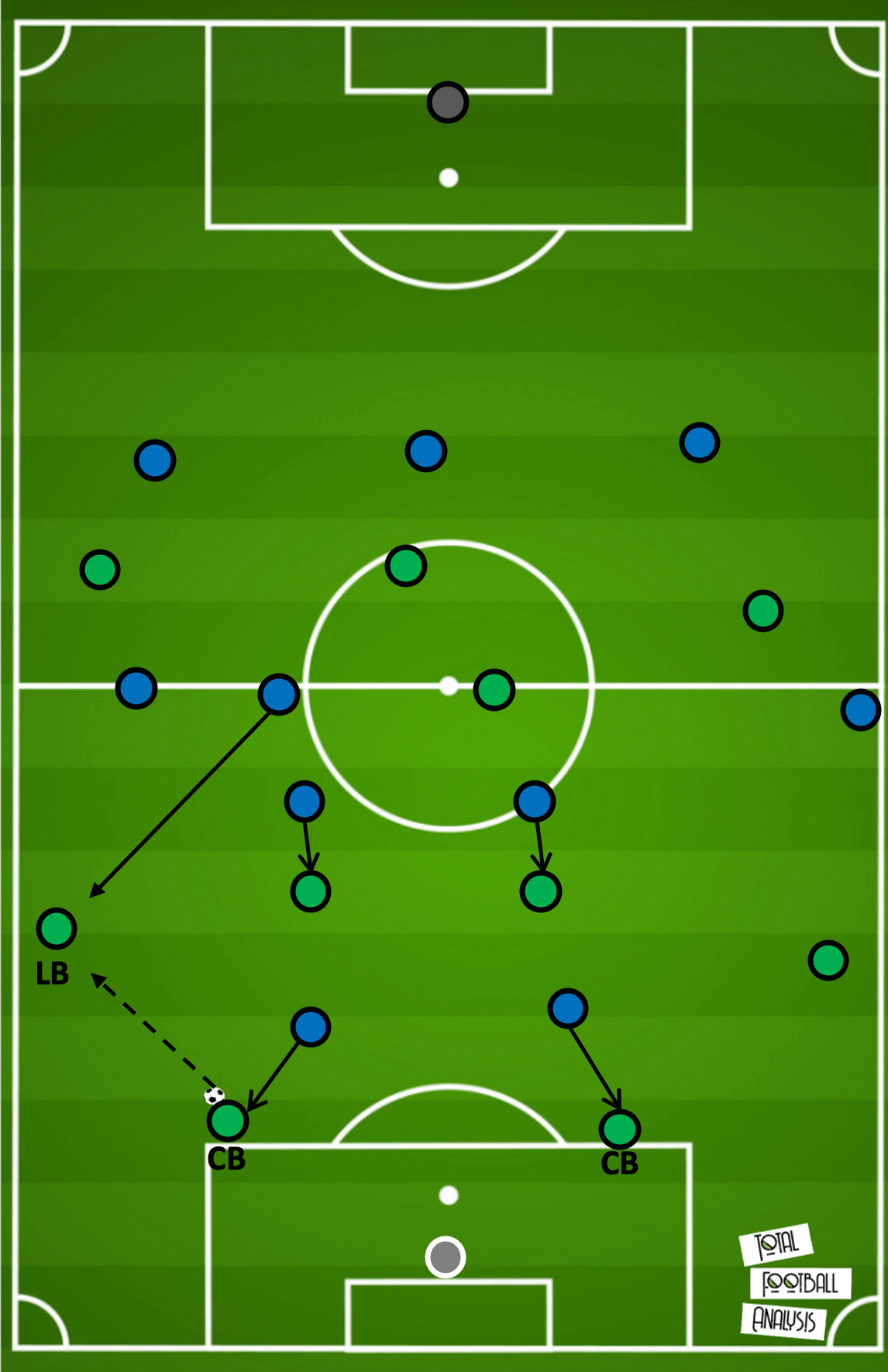 Sassuolo dealt with this pressure quite well, they took advantage of Atalanta’s man orientation by using their centre backs to stretch the two centre forwards and create space for the goalkeeper to step out and overload the first line with a 3v2 advantage. The double-pivot was still marked, and the fullbacks would be pressed if passed to, so Consigli usually chose to play a long pass into the space behind Atalanta’s defensive line. These long passes led to most of Sassuolo’s chances with the front four running onto passes in behind after Consigili played long or flick-ons into the space in behind. We can see how Sassuolo exploited Atalanta’s man orientation by using the goalkeeper to overload the first line in the diagram shown below. 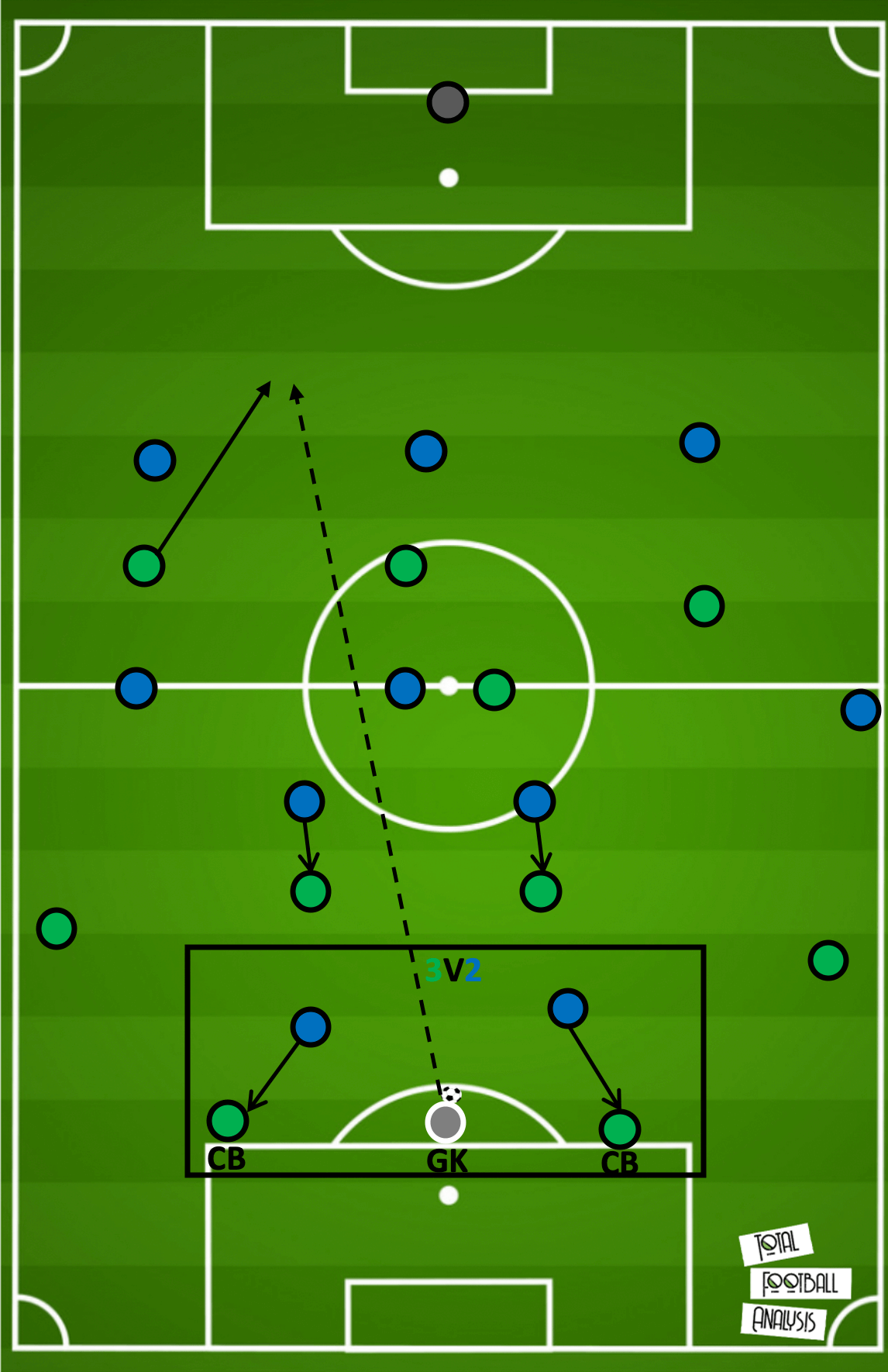 In the images shown below, we can see examples of this. The first example occurs very early in the game, we can see Sassuolo’s box structure with the double pivot, the deep fullbacks, and the centre backs stretching the press for the goalkeeper to have space on the ball. We can also see Atalanta’s man orientation, primarily on Sassuolo’s double pivot and centre backs. 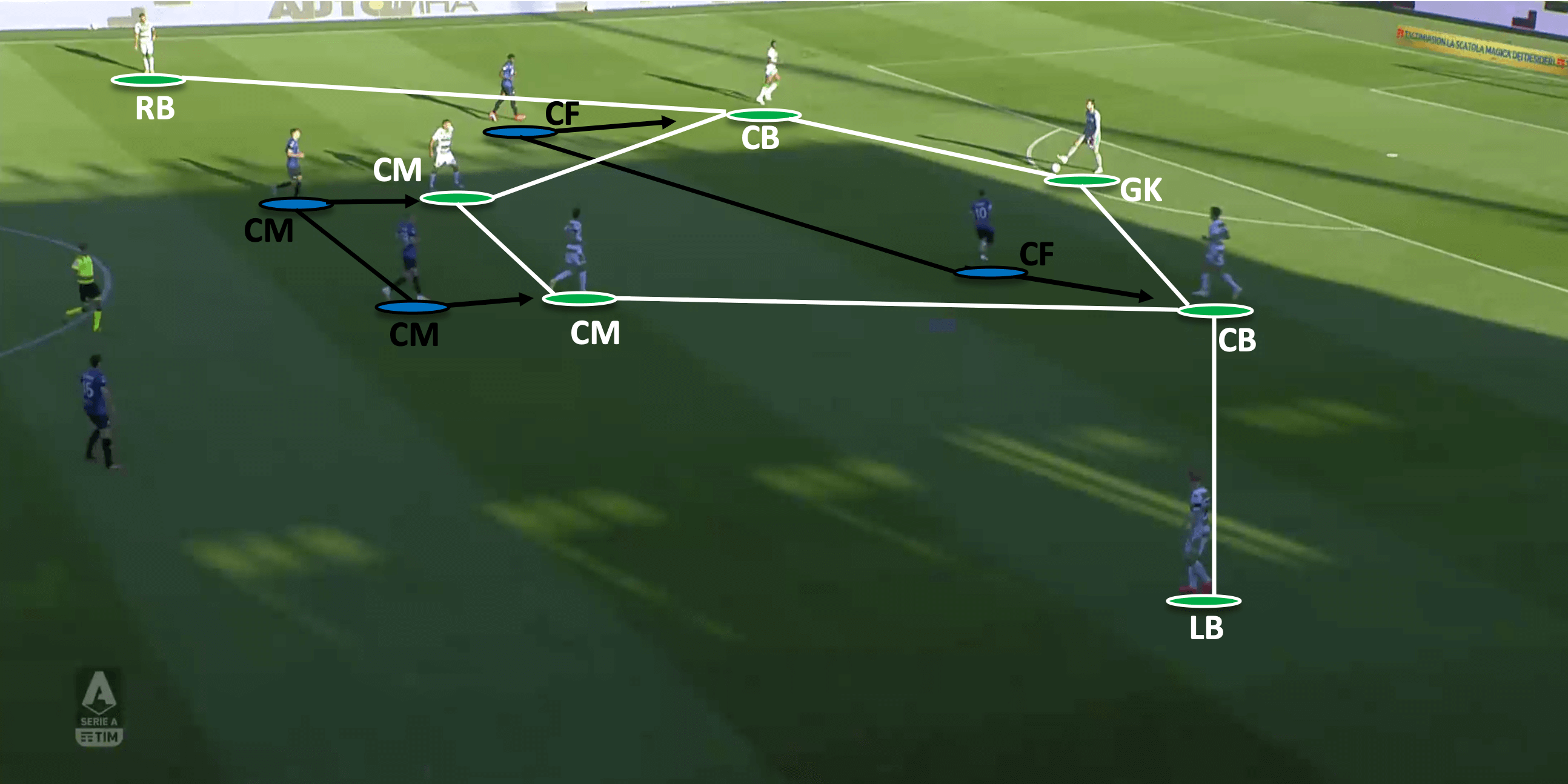 We can see another example of this, this time later in the game. Once again we can see the same structure from Sassuolo and Atalanta. 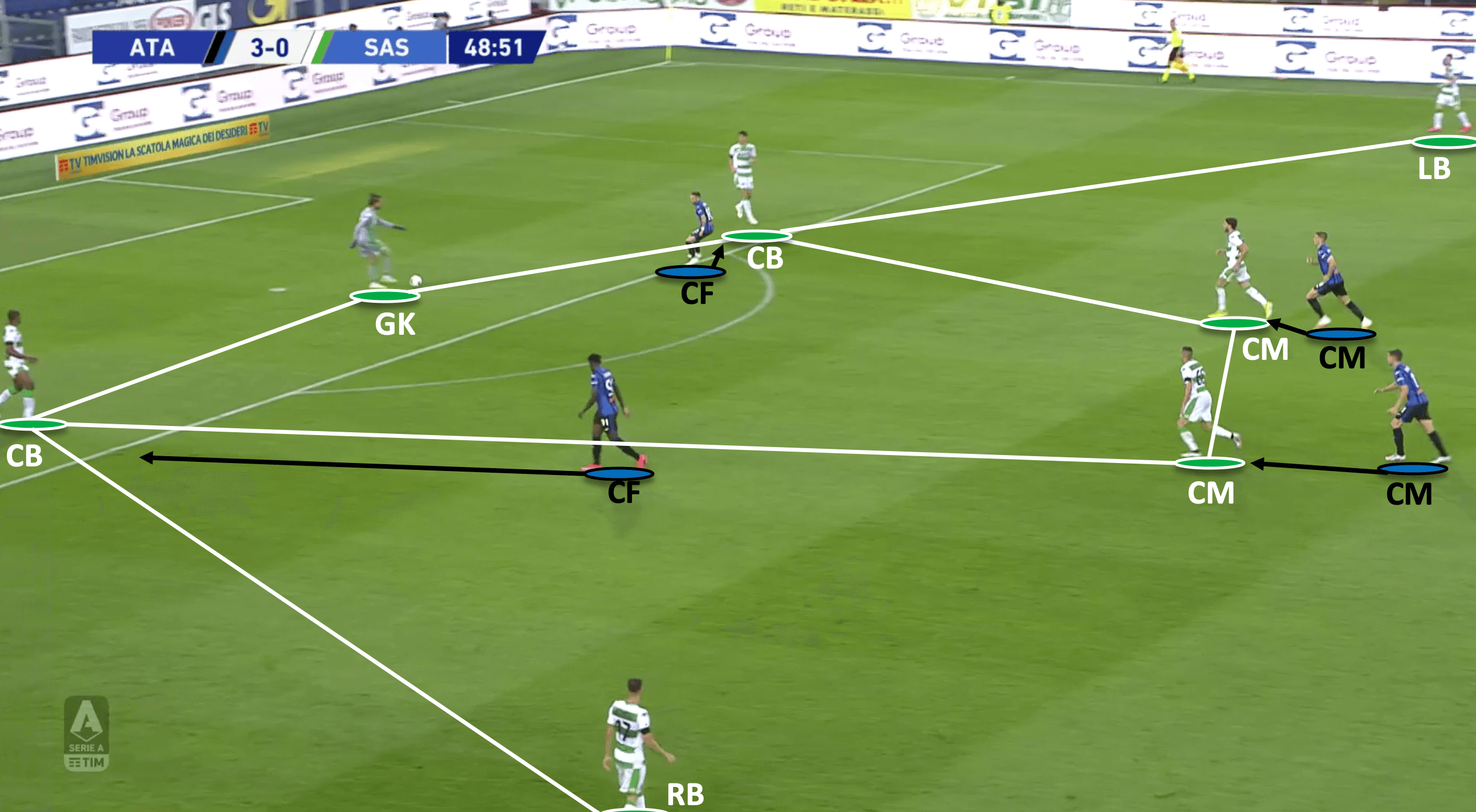 Below, we can see Atalanta’s pressing structure with the specific roles shown. Pašalić is marking Sassuolo’s near side pivot (Locatelli). Atalanta’s near side central midfielder (De Roon) presses the near side fullback (Kyriakopolous) when the ball is played to him. 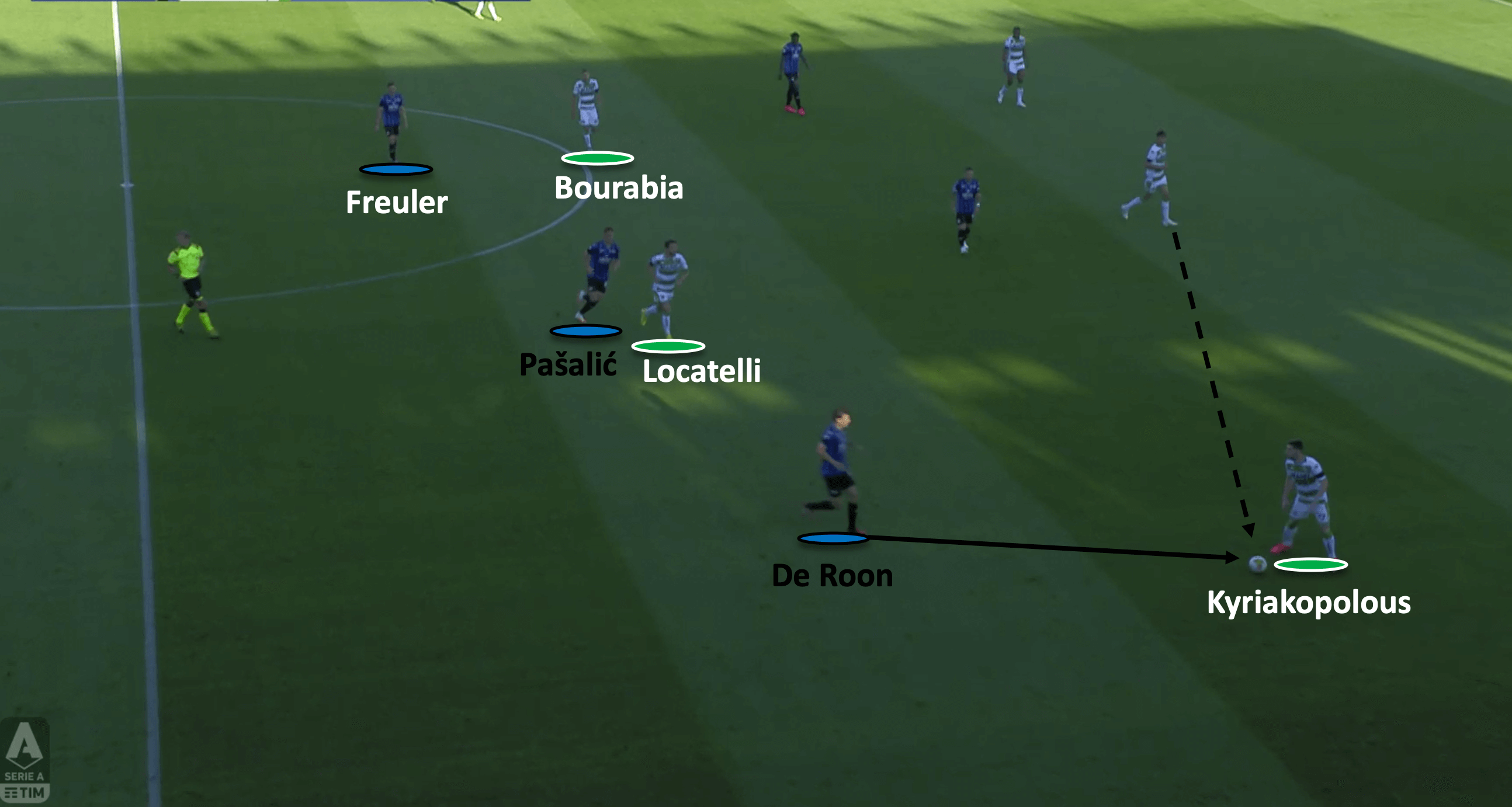 Sassuolo may feel hard done by when looking at the final score. Although Atalanta created a great deal of quality chances, so did the away side, and Golinni had a good game, saving multiple one-on-one shots from Sassuolo runners in behind.

This result extended Atalanta’s lead ahead of 5th placed Roma to six points, while Sassuolo slipped slightly into 12th place. Atalanta host Lazio in their next match, in a mouth-watering game between Serie A’s best attack and best defensive unit. Sassuolo also play a potential title winner this season in their next match, as De Zerbi’s men travel to San Siro to face off against Antonio Conte’s Inter Milan.