Chelsea’s UEFA Champions League qualification seemed to have taken a huge blow after the heavy defeat to Sheffield United. However, subsequent results of their direct rivals have given them a huge sense of relief. Norwich did not have that luxury. The defeat against the Hammers guaranteed their relegation.

Chelsea had too much at stake and any result going against their way could have grave consequences for the Blues. The Canaries had nothing but pride to play for and end their Premier League campaign on a high note.

Did the Canaries’ performance give them a sense of pride? Let’s look at the xG dynamics before diving into the analysis to have an overview of the Norwich performance.

Norwich registered a mere 0.02 xG with only two shots, both of them were from outside the box.

Frank Lampard did not hide his disappointment after the Sheffield United match and gave a clear indication of personnel changes in the Norwich game. Though the gaffer stuck with his preferred 4-3-3, he made four changes to the lineup.

Antonio Rüdiger and Marcos Alonso were brought back in defence and the duo had a huge influence in the game. Mateo Kovačić and Ruben Loftus-Cheek steadied up the midfield in place of Mason Mount and Ross Barkley. 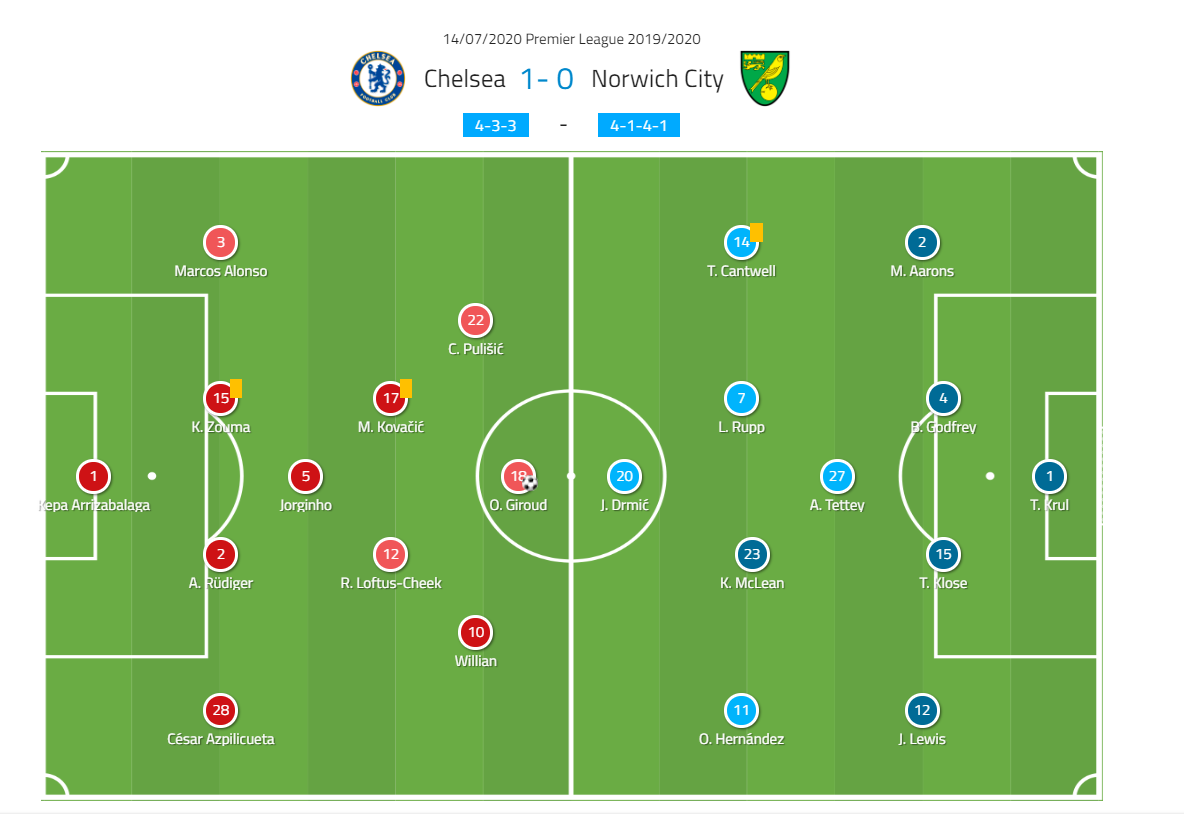 The German altered his formation from a 4-2-3-1 to 4-1-4-1 in this game and also made the same number of changes as Lampard. Kenny McClean and Lukas Rupp played as central midfielders. Todd Cantwell was slotted in the right-wing and Josip Drmić lead the attack, who was almost non-existent throughout the game.

Under Lampard, Chelsea is known for their high and aggressive pressing, which resulted in a lot of opposition goals at the start of the season owing to the Blues’ poor structure. However, since then the Chelsea legend has worked on it and made it more structured.

Norwich hardly played out from the back but when they did, Chelsea pressed the Canaries high and aggressively with a man-oriented approach. Chelsea had a 7.68 PPDA which means the Blues allowed 7.68 passes per defensive action that shows their eagerness to press up high in the opposition half. 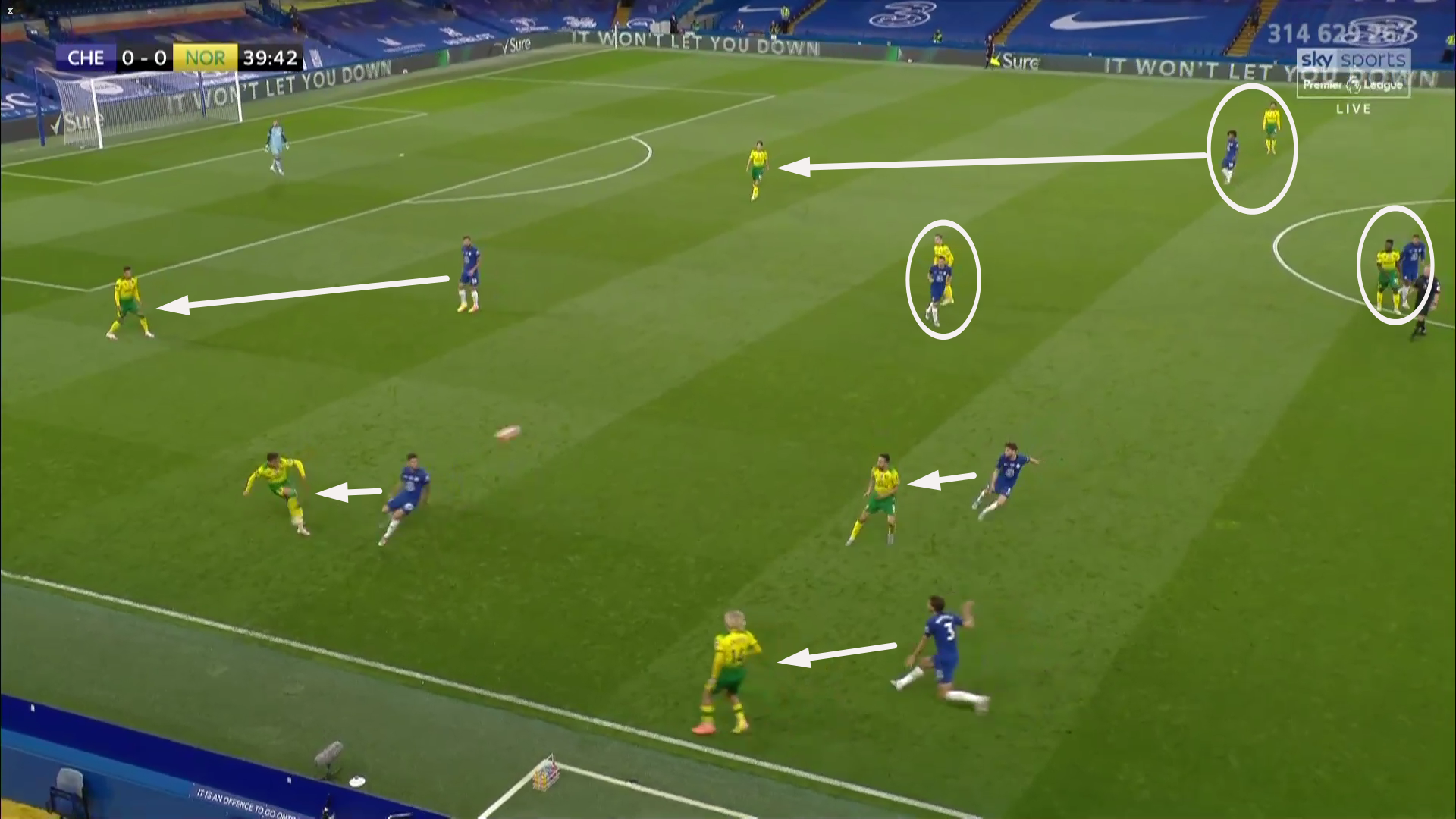 Here, Tim Krul passed the ball to Ben Godfrey (RCB). He succeeded to make another pass to the right-back, Max Aarons. However, his all immediate options were eliminated by the Chelsea players and Willian had the responsibility to mark both Timm Klose (LCB) and Jamal Lewis (LB) in case of an unexpected switch. Aarons had no option but to play a long ball to the opposition half.

Whenever Norwich would breach Chelsea’s high press through long balls or a rare build-up, Chelsea would line up in a compact 4-1-4-1 or 4-5-1 and protect the central channel and half spaces. Norwich would progress their attack to the flanks and due to lack of rotations and swift movements, Chelsea would easily win back the ball or the Canaries had to play it backward. 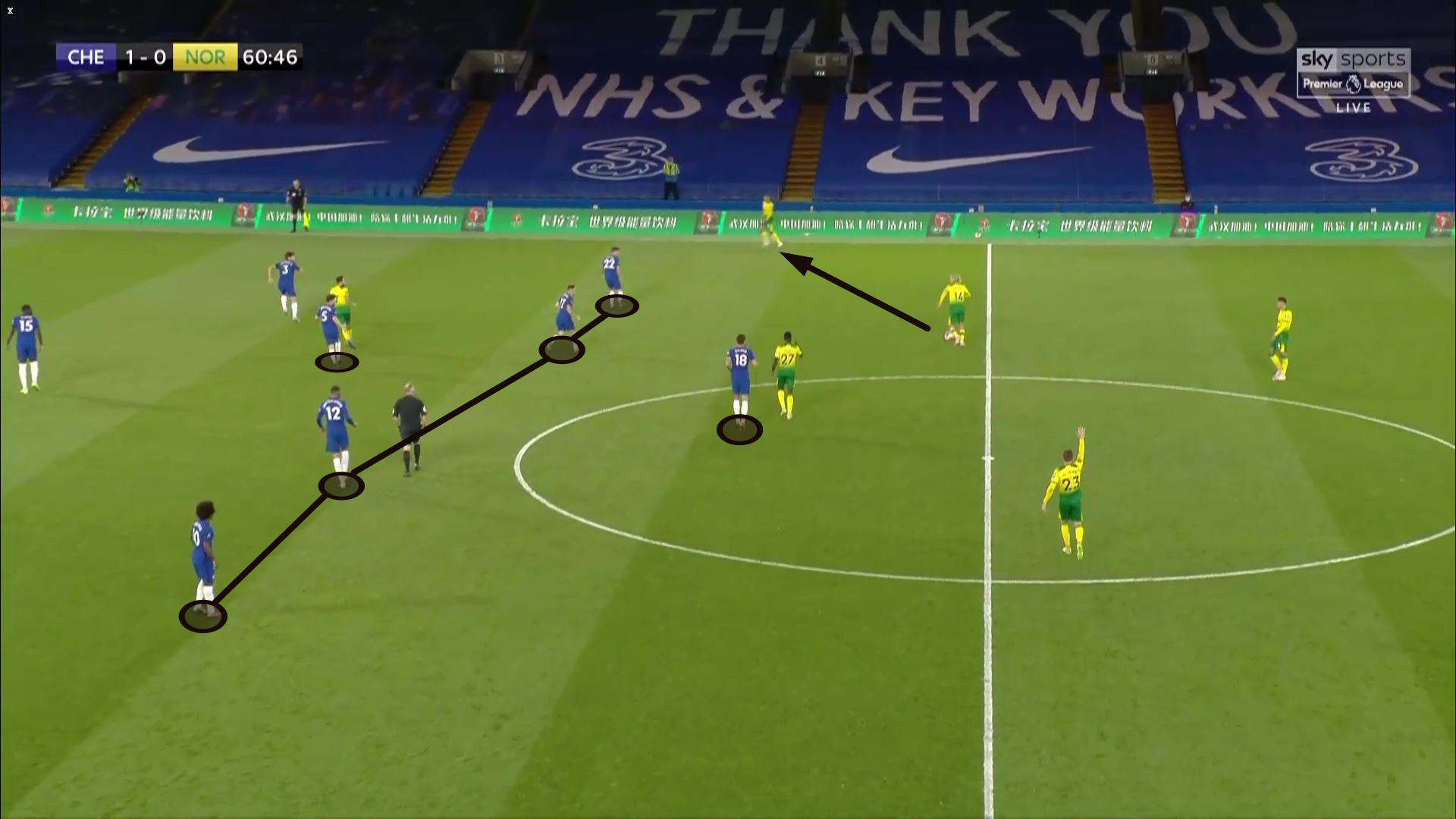 In the above image, a similar 4-1-4-1 formation can be seen in Blues’ own half. The four midfielders and the four defenders sat compact and hardly left any space between the lines. The space that was left was protected by Jorginho. Cantwell unable to breach the Chelsea setup centrally passed the ball wide to Aarons. When that happened, Christian Pulisic pressed him aggressively and Aarons had no option but to pass the ball backward.

The Canaries had a paltry 11 positional attacks against Chelsea, joint-lowest in this campaign.

Norwich throughout the game sat in a mid to low block, which can be validated by Norwich’s 23.16 PPDA. Drmić positioned himself near to one of the centre-backs (ball-carrier) and blocked the passing lane to Jorginho which forced the Chelsea centre-back to pass it to his fellow centre-back. When that happened, one of the midfielders would leave the initial 4-5-1 structure and move up to press the centre-back. 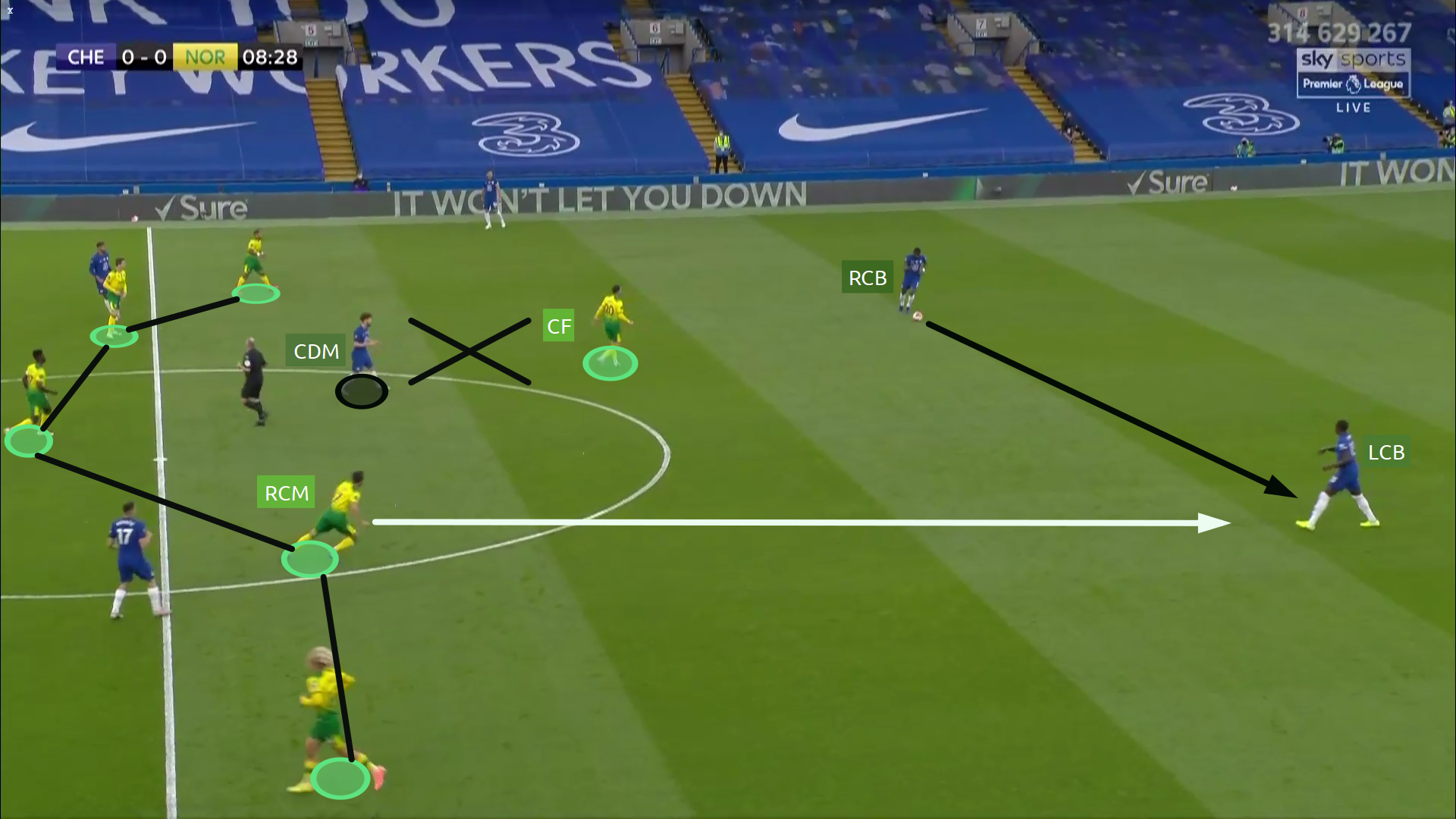 As you can see here, Drmić stayed near to Rüdiger (RCB) and blocked the passing lane to Jorginho (CDM) which forced the German to pass the ball to Zouma (LCB). 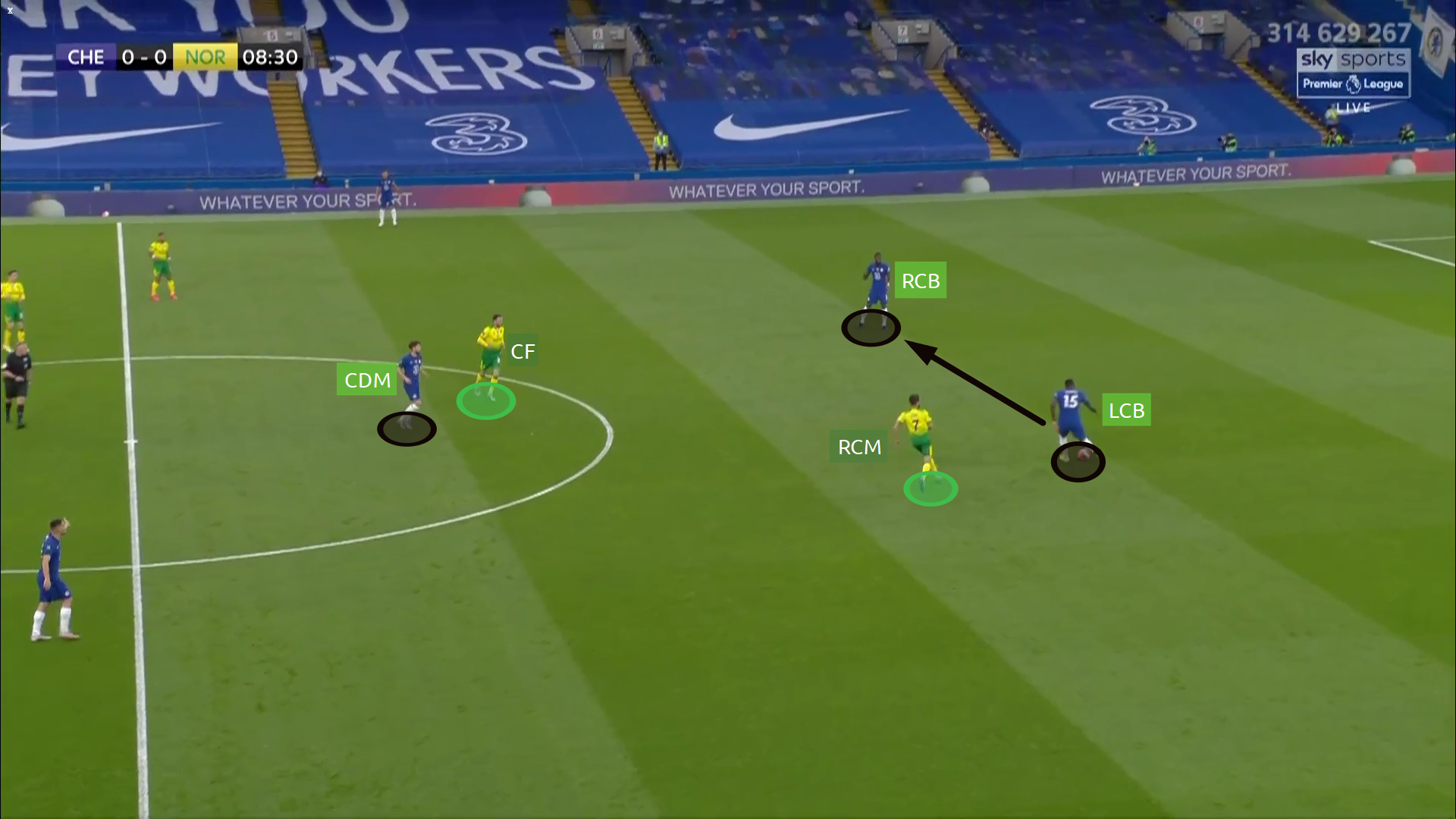 When the ball was passed to Zouma, Rupp (RCM) moved up to press Zouma and Drmić covered Jorginho instead. Zouma had no short passing option but to pass it back to Rüdiger.

However, Chelsea devised a quick response. To prevent aimless lateral passing between the centre-backs, Jorginho would move out of Drmić’s cover shadow and form a three-man backline. So, when Rupp would move up to press Zouma, he would pass the ball to the third player in line. 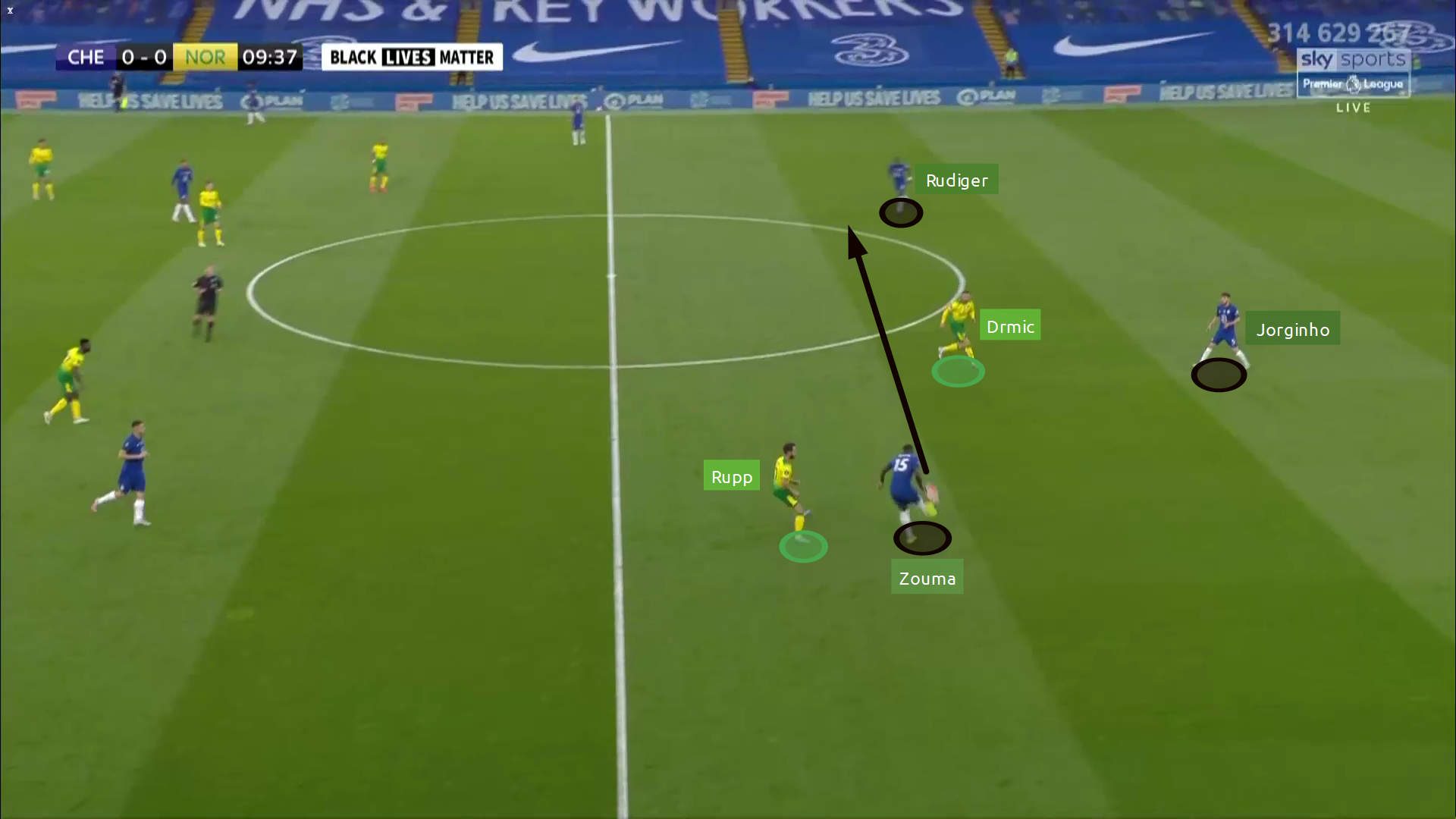 Here, you can see Drmić marking Jorginho who is now a part of the three-man backline. When Rupp moved up to press Zouma, he lofted up the ball to Rüdiger. The German wasn’t pressed by any of the other Norwich midfielders and had a lot of time and space to progress the ball forward.

Chelsea kept 67.28 % possession against the Canaries. In the initial build-up, you would often see a two-man backline or a three-man backline, and the full-backs would be pushed up high and wide. The wingers would tuck in half spaces and pin the opposition full-backs. The defenders and Jorginho would play passes between them and whenever the wingers have managed to pin the opposition full-backs and created space for Alonso and César Azpilicueta, one of the three players would play a long ball to one of the full-backs. Rüdiger was very important to the Chelsea lineup against Norwich. The German played 17 long balls with a massive 76% accuracy and most of the long balls were wide to the full-backs or wingers, as can be seen in the image below. 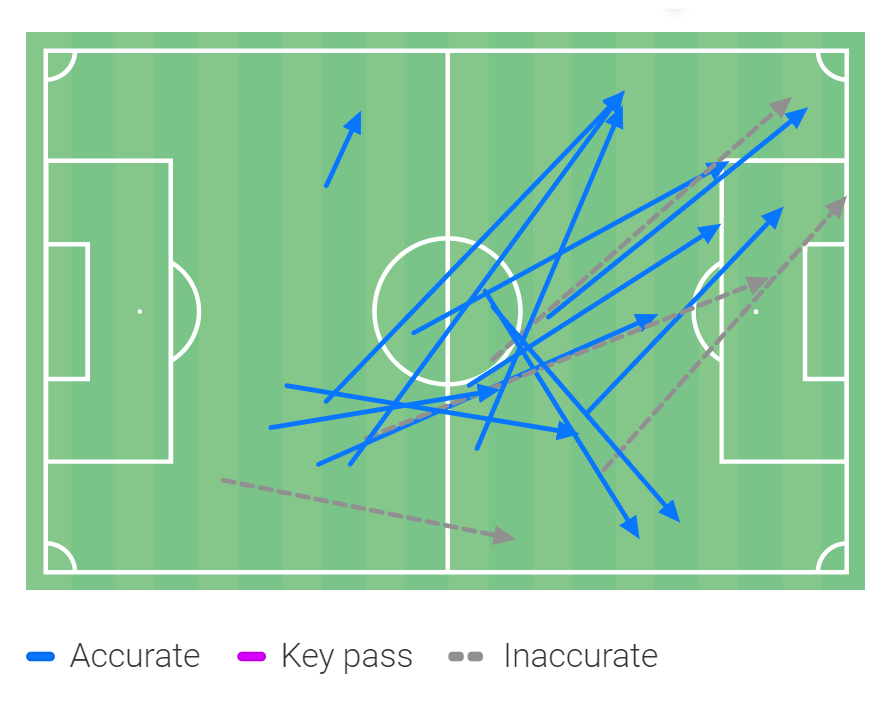 To counter the 3-2-5, structure, often Cantwell would drop down to form a five-man look-alike defence to immobilise the marauding Alonso. 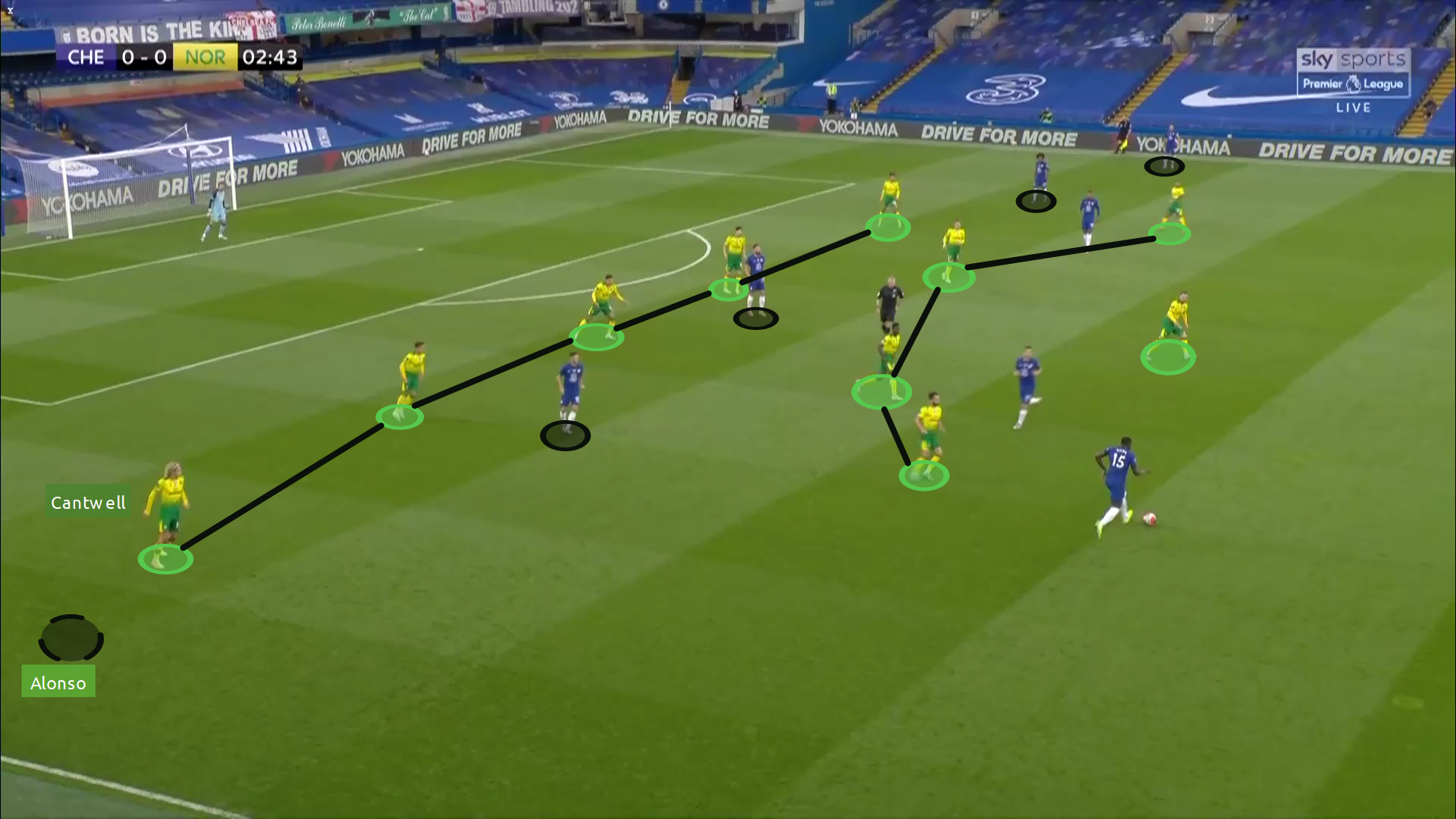 However, most of the time Alonso would find himself isolated. One of the centre-backs would find him or any of the outer channel players and they would whip in crosses for the Chelsea players inside the box. Chelsea delivered a massive 29 crosses inside the box, even Rüdiger had 2 crosses to his name.

Occasionally, even Loftus-Cheek would move up to form a six-man attack, when one of the centre-backs was allowed to carry the ball forward by Norwich. 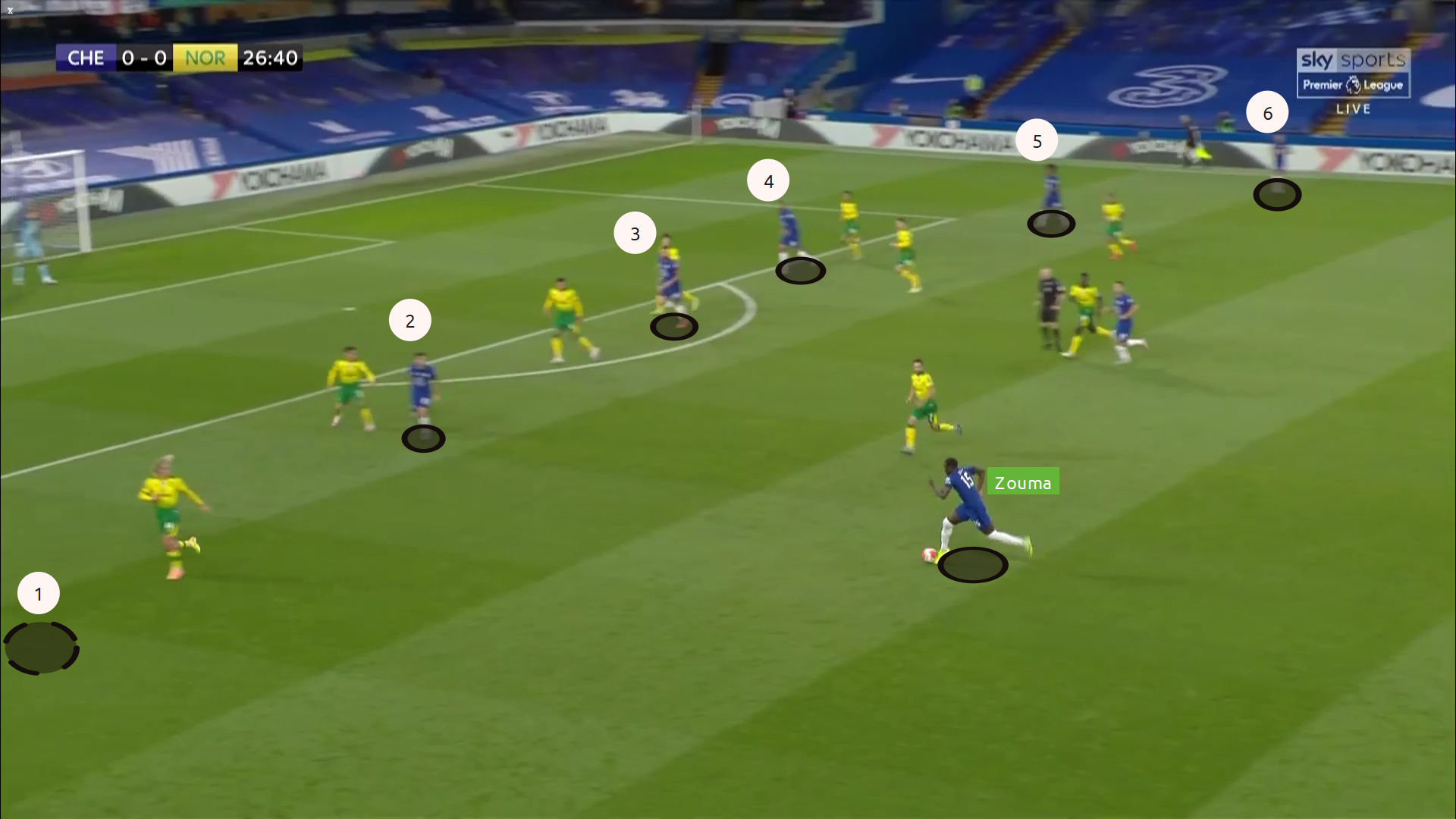 Here, Zouma is seen carrying the ball to the Norwich final third and overload the left flank. These sorts of situations were created by quick exchange of passes between the back three (Zouma, Rüdiger, and Jorginho). Two of them would exchange passes in one vertical half with the help of other players and quickly switch the attack to the other half for the other centre-back to carry the ball forward.

If not direct crosses, Chelsea would form triangles on the flanks, rotate to create space either for a cross or key passes. 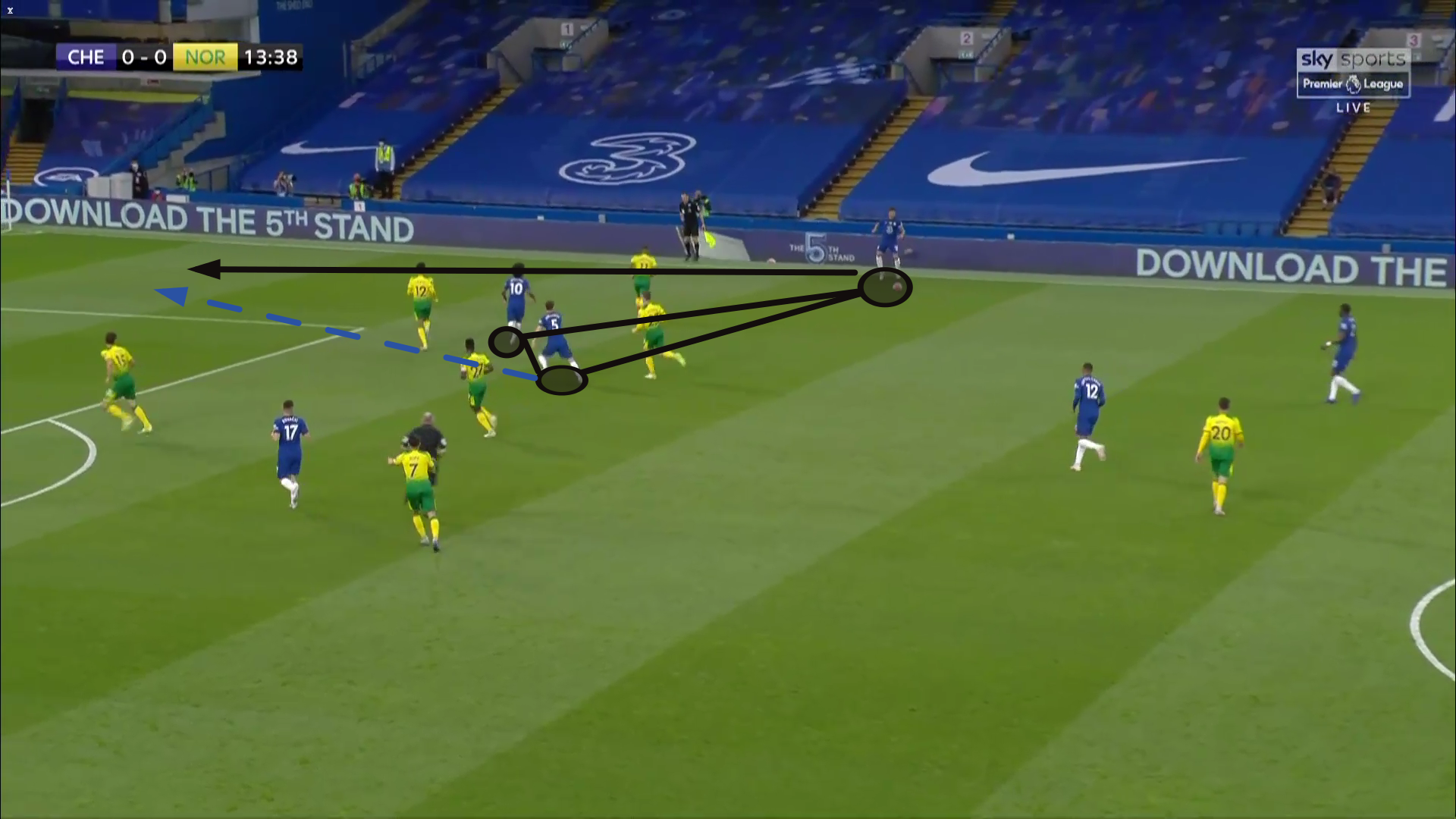 Here, Loftus-Cheek and Jorginho exchanged positions and the triangle was formed between Azpilicueta, Willian, and Jorginho. Jorginho made a run and McClean failed to follow him and a cross was delivered into the box.

Even the goal Norwich conceded was due to rotation in triangles by Chelsea and eventually, Pulisic producing a cross for Giroud and maybe a change in tactics by Farke during the drinks break.

Let’s observe the two images minutely. In the first image, it can be seen the right-back is compact in a four-man backline with Alonso being taken care of by Cantwell who positioned himself with respect to the Chelsea left-back.

In the second image, the right-back is asked to move towards the flank and press Alonso instead of Cantwell and instructed one of his midfielders to drop to contain Pulisic. This may be due to the fact that Alonso was often evading Cantwell’s marking and created overload on the left-flank along with Pulisic. However, Farke played into Chelsea’s hand through the tactical change.

In the image below, it can be seen, Aarons (RB) doing his task well in pressing Alonso, as he was instructed during the drinks break, but Cantwell is seen not doing his duty well, rather it was impossible for Cantwell to drop so quickly to mark Pulisic. Alonso passed the ball to Pulisic whose cross found the winner for Chelsea. 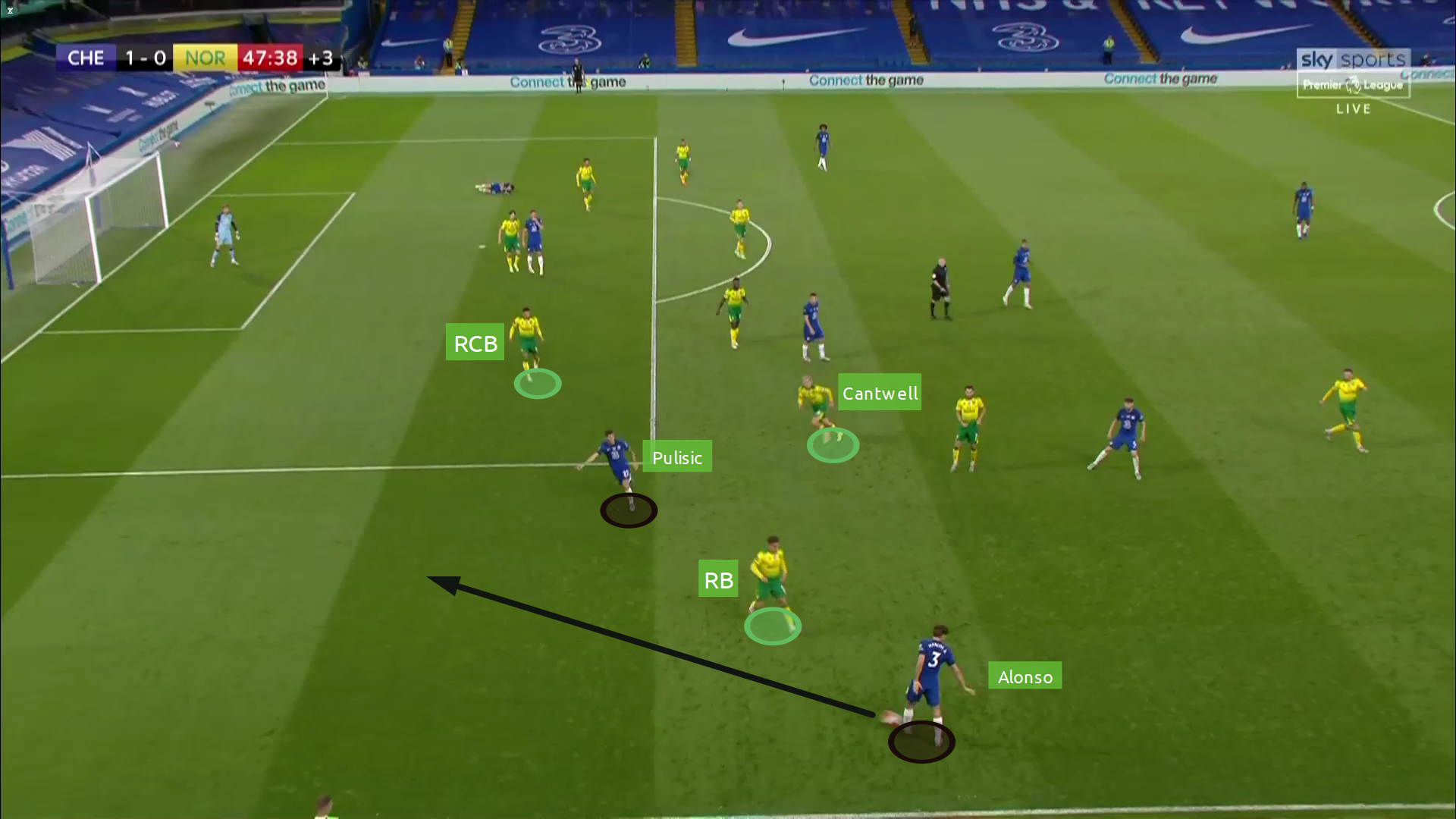 Frank Lampard wanted more hunger from his players after the defeat to Sheffield United and his players showed him the hunger against Norwich.

Whenever Chelsea would lose the ball in the opposition half. A pack of three would often hunt a Norwich player. Two players pressing aggressively and the third cutting the immediate passing lane.

It can be best explained by the sequence below. 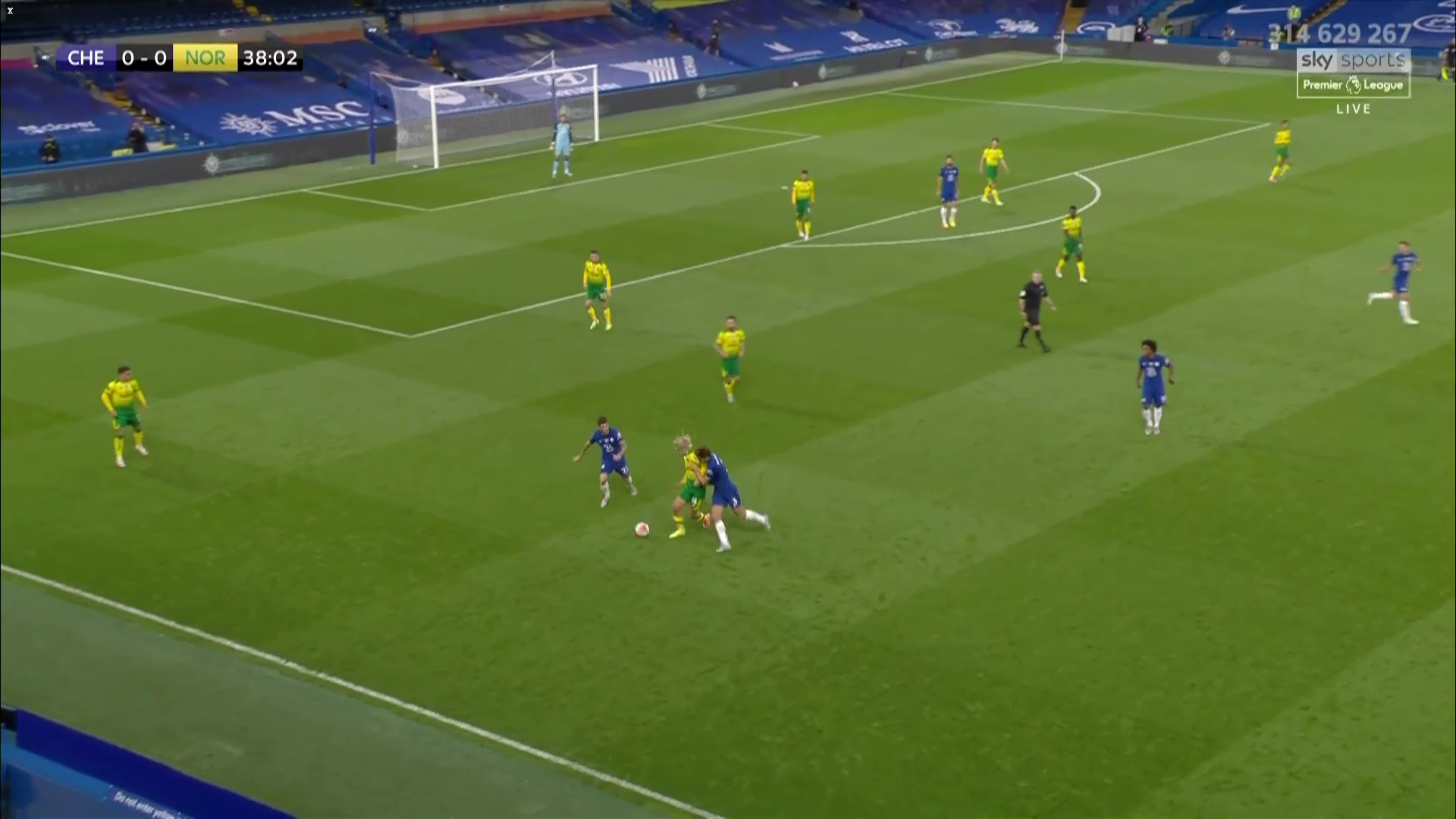 Here, Pulisic lost the ball. Once the American lost the ball, he and the close proximity player (Alonso) immediately pressed Cantwell. 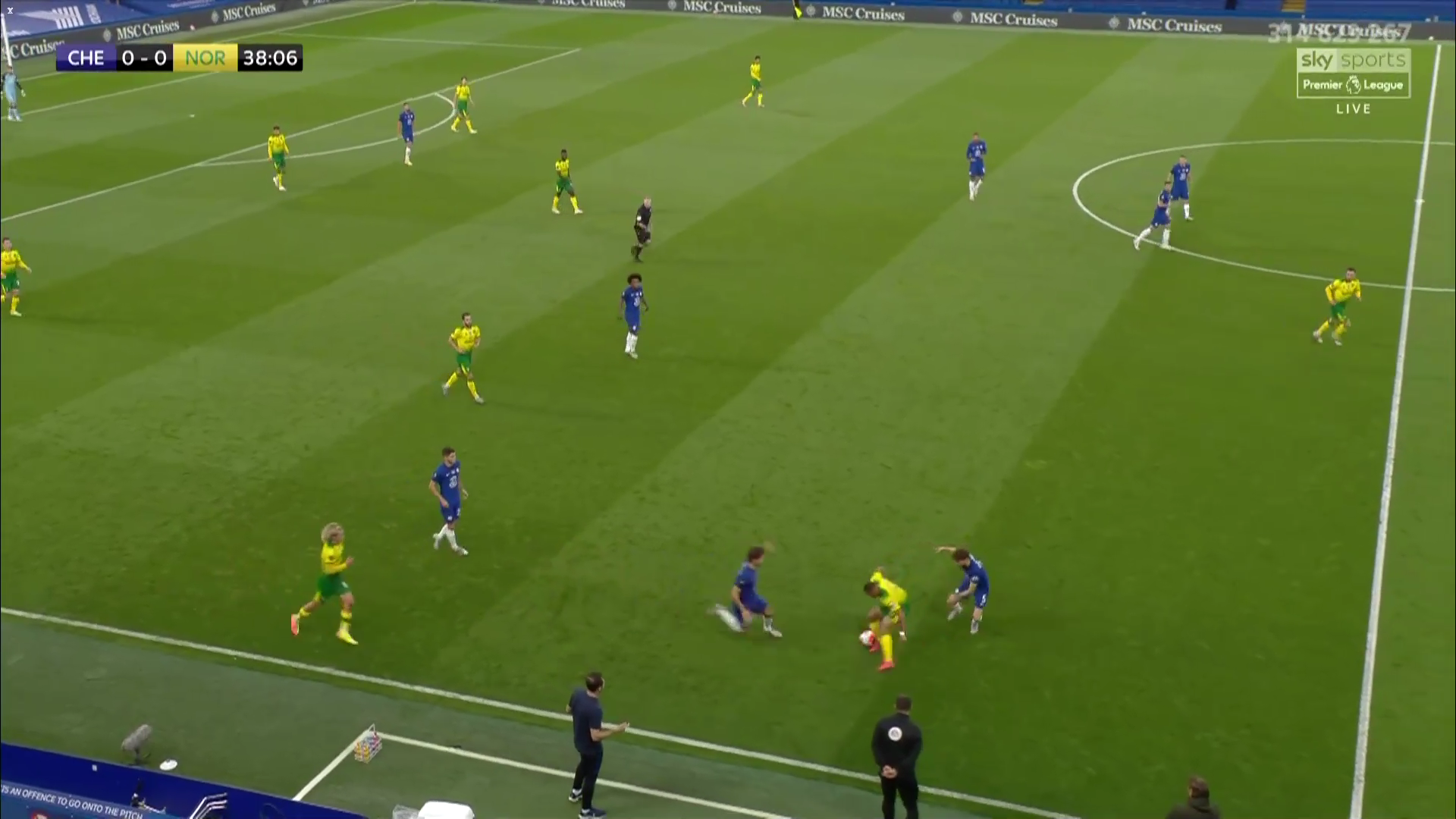 Cantwell was able to go past the first round of counterpress and passed the ball to Onel Hernández. Once Hernández had the ball, Alonso and Jorginho pressed the winger aggressively. 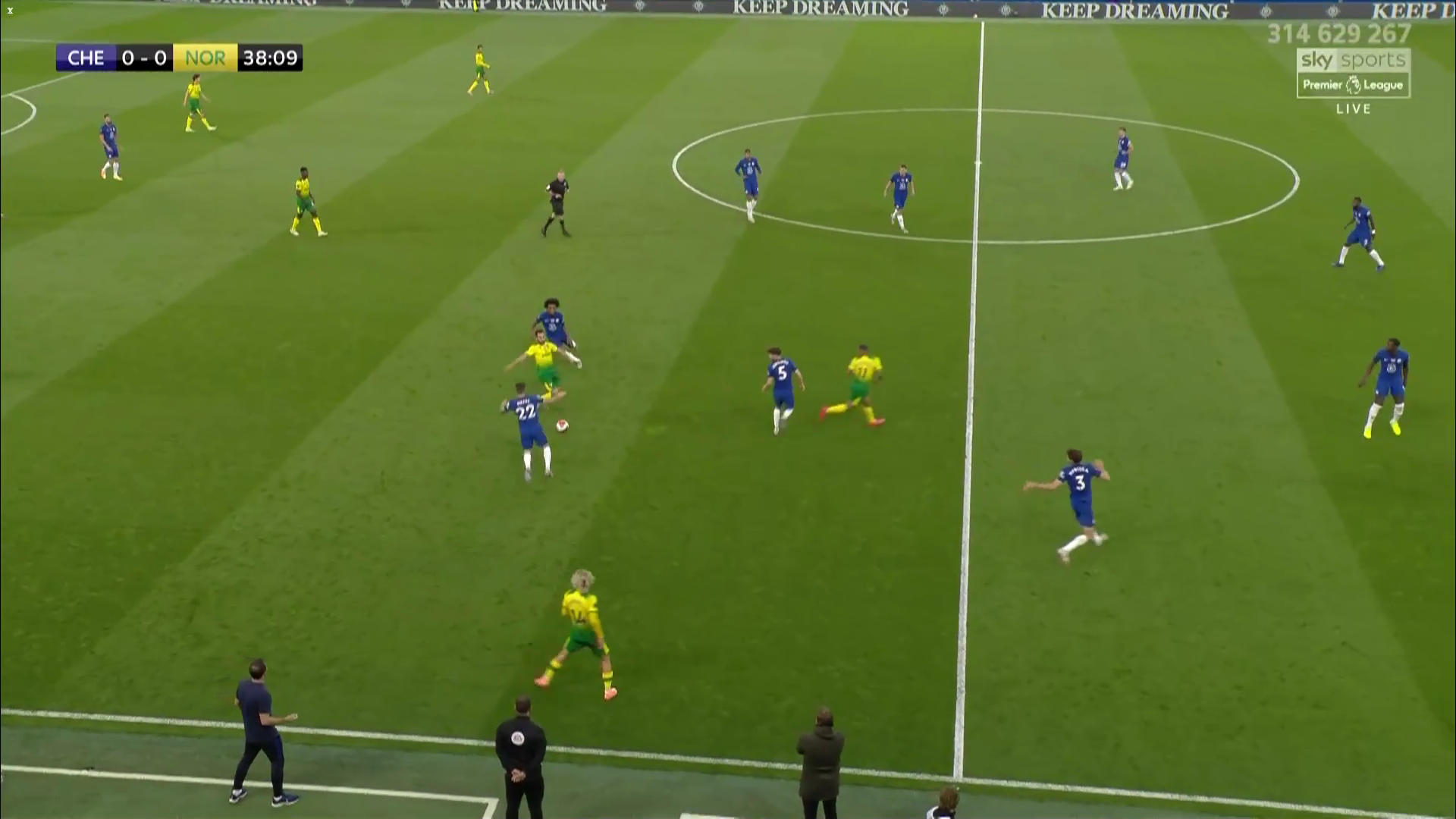 Jorginho was able to nick the ball but it fell to Rupp’s feet. Once the Norwich midfielder had the ball, Pulisic and Willian pressed him aggressively and Jorginho decided to cut the immediate passing lane. Finally, the ball was won back by the American.

Norwich never looked like scoring and had only two shots in the entire game, that too were from outside the box which was hardly a scoring situation.

Chelsea would be a happy team with this win and would surely feel the Champions League’s tune in their ears. However,  the league is far from being over and anything can happen in the next two games.