Chelsea Football Club has been the new giants of the Premier League ever since Roman Abramovich took over in the early 2000s. Since then, he has bankrolled some of the world’s biggest signings. This summer, there were no signs of stopping. After squeezing into a UEFA Champions League place by finishing fourth last season, Frank Lampard felt that his squad was not enough to challenge for trophies. Abramovich’s answer: spend almost a quarter of a billion pounds to freshen up the Blues. Perhaps this was a response to the transfer ban Chelsea had to withstand or the result of selling club legend Eden Hazard to Real Madrid.

Lampard is considered very fortunate due to the prestige of players he now has at his disposal. Despite Tammy Abraham scoring 15 goals last season, Lampard felt the need for a more reliable and ruthless striker. Werner came from the Bundesliga as well as another attacking threat, Havertz.

Despite being lauded as great signings, these two players have found life difficult while adjusting to the Premier League. With Chelsea having come away with only 7 points in their first 4 matches, it has not been the dream start Lampard would have wanted.

This tactical analysis and scout report will examine why Werner and Havertz have caused Lampard a tactical conundrum as he tries to find the right formula for his Chelsea side.

While signing fantastic players with bags of ability is always a dream for any manager, in the case of Lampard, it is becoming a problem for his tactics. The fact of the matter is there is so much attacking threat and talent in Chelsea’s forward players that it is difficult to fit everyone into the starting eleven. This causes major problems with players as the manager has to find the right formula while still keeping players happy. Obviously, no one wants to sit on the sidelines after signing for a club like Chelsea.

The attacking players Lampard has at his disposal are all experienced professionals. These players include Christian Pulisic, Olivier Giroud, Tammy Abraham, Timo Werner, Kai Havertz, Hakim Ziyech, Mason Mount and Callum Hudson-Odoi. While not every player will earn the right to be a part of the starting eleven, there are certainly players who are going to be left out. Furthermore, by not playing young and emerging stars like Mount or Hudson-Odoi, it can cause issues with their development. Quite simply, players need to play to improve and get results.

After spending big on signings such as Werner and Havertz, these players have to play. Recently, Lampard has been experimenting with his squad to try and get the best formula. However, he is finding that emptying the bank account may not be the immediate fix he was hoping for.

Tactically, Lampard has deployed two different formations: the 4-3-3 and the 4-2-3-1. The key area where these formations differ is the midfield role, wherein the 4-2-3-1 there is an attacking midfielder who occupies the number 10 role. Below are examples of Lampard’s starting eleven in two different matches thus far in the Premier League. When looking at these starting elevens take note of where Havertz and Werner are stationed.

In the second match of the Premier League season, Chelsea lost 2-0 to a dominant Liverpool side. They started this match in a 4-3-3 with Havertz playing as a striker and Werner playing as a left-winger. Mount is on the right-hand side while there is a more defensive-minded midfield three behind them. 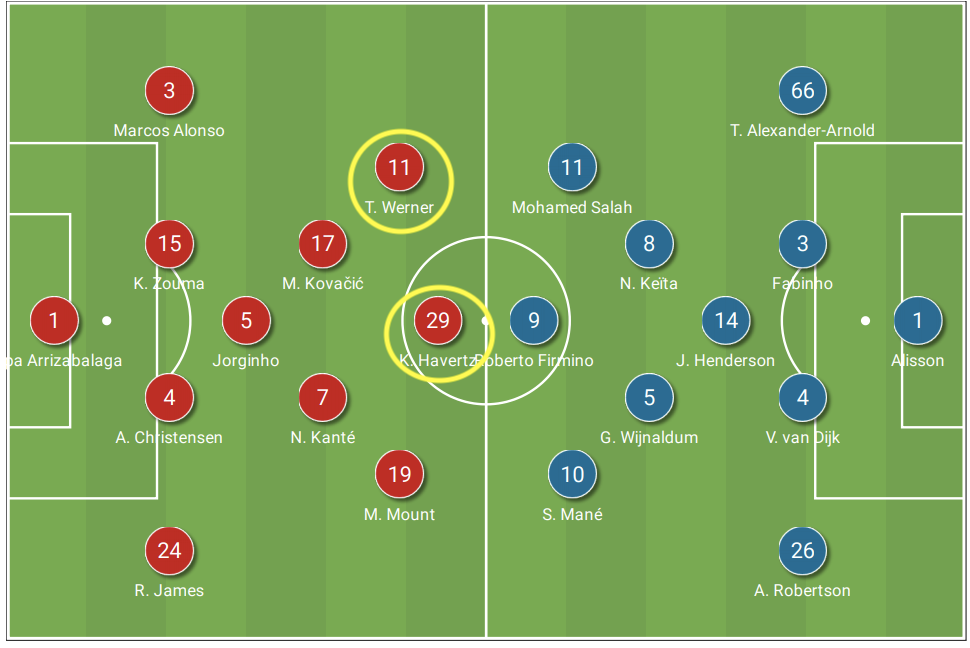 In their next match which ended in a 3-3 draw, Lampard deployed yet another formation. This time, Havertz was dropped into the number 10 role, allowing Abraham to start up top and Werner out wide. 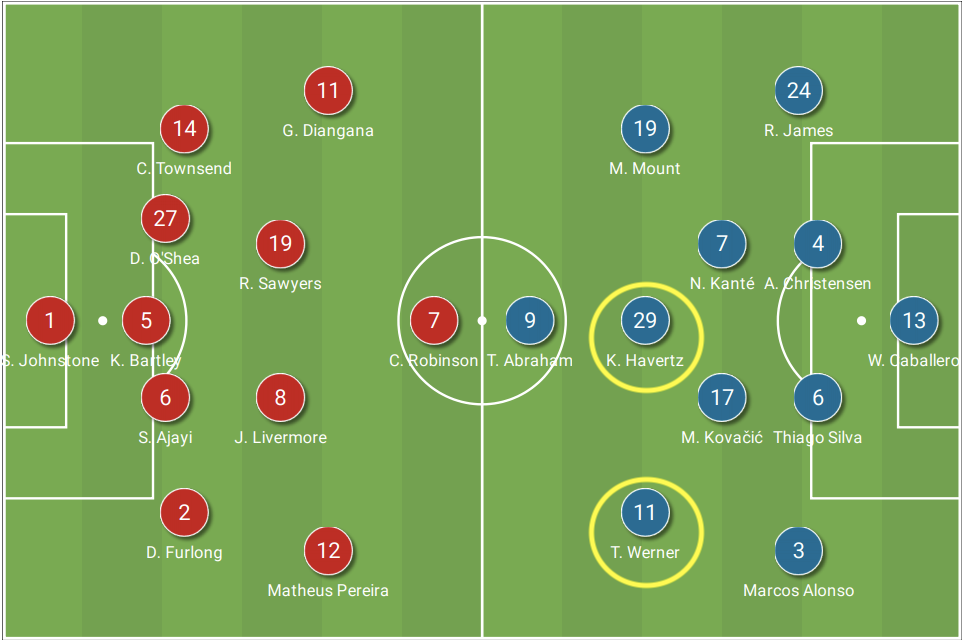 These two different tactical setups show the conundrum Lampard is facing. He clearly likes Havertz playing through the middle, however, he even played him out wide during his first few matches. A hat trick while playing center attacking midfield against Barnsley soon changed that decision for the Blues legendary midfielder.

For Werner, Lampard is deploying the German out wide despite his incredible goal record from a more central position while playing for RB Leipzig. The question becomes: how does he solve this issue? Due to Pulisic and Ziyech coming into the picture soon after a return from injury, surely things will change.

When looking at what Lampard should do with “Turbo Timo,” it is clear that he prefers him on the left-wing. However, as Pulisic comes back to full fitness, this could lead to a change in the utilisation of Werner.

Werner is a proven goalscorer and has the ability to get in behind defenses due to his incredible pace. He has good positional awareness and plays well when linking up play with a secondary striker. These attributes all lead to the claim that his best position is playing as the central striker. Over the past 50 matches Timo has played, he has started centrally in 36 matches. This was due to Nagelsmann’s tactics to utilise Werner’s pace to get in behind. Nagelsmann played a 3-4-1-2 formation, which allowed Timo to have plenty of opportunities to link up to the secondary striker. With a player such as Giroud, this could be an option for Lampard as he continues to experiment with his team selection.

The graphic below shows all of Werner’s shots over the past calendar year. As you can see, the majority of the goals that Werner scored were coming from central and slight right-sided areas, which proves that when in those positions, he is most likely to score. 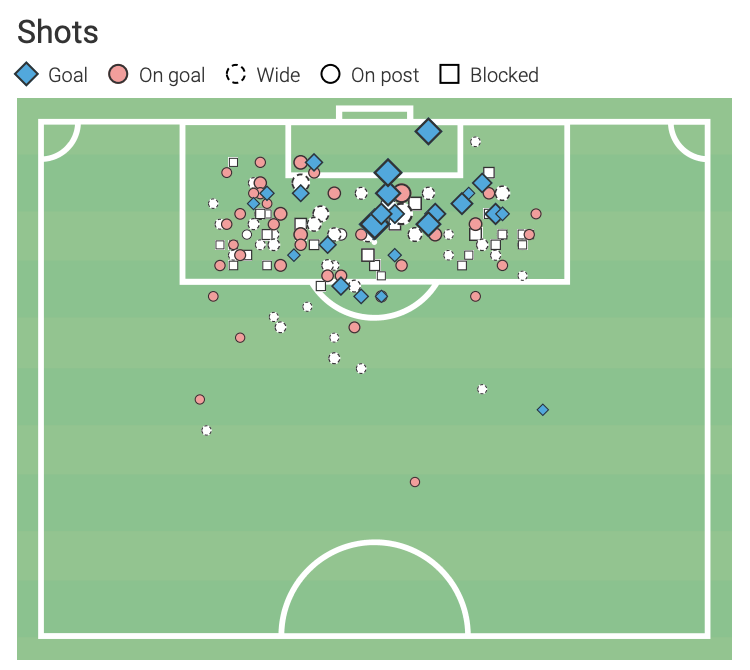 Werner has yet to score in the Premier League despite four appearances, which could be related to his position on the pitch. Out on the left flank, he is tasked with being more of a creator. Ultimately, Werner craves being in the box and having the highest chance of scoring goals, just like any striker. In the heat map below, you can see Werner’s positioning through his four matches in the Premier League. His positions do not match those from above where he scored countless goals while in the Bundesliga. 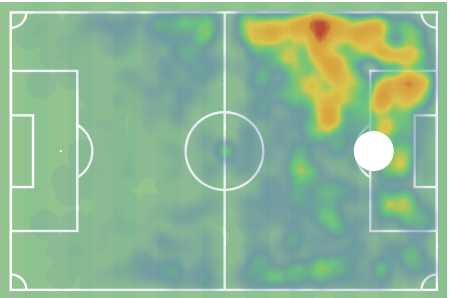 This evidence suggests that Werner is not best utilised out wide. By playing him centrally, he may be able to link up play with Havertz, who is the next player Lampard needs to figure out.

After analysing Werner’s best position on the pitch, it is clear that he is more effective centrally. The same can be said about Kai Havertz, Chelsea’s new marquee signing. The young German star can play multiple positions on the pitch and is praised for his ability to create and score goals. Over the last year, Havertz has played out wide, centrally as a creative midfielder and finally a central striker.

Lampard has been busy utilising the young German in many different positions since his start at Chelsea, but after a hat trick in the League Cup, Havertz earned his spot as Chelsea’s attacking midfielder in the 4-2-3-1 formation. Typically attacking midfielders are more focused on creating goals through key passes and assists, but at Bayer Leverkusen, Havertz scored double his assist tally. After 30 appearances in the Bundesliga, Havertz scored 12 goals and registered 6 assists.

The reason for these figures was due to his positioning. Although regularly deployed as the number 10, the German was given a license to push forward and penetrate the box. However, in this Chelsea side, Havertz is tasked with being more of a creator rather than someone who scores goals. This could affect his production and may play against some of his key strengths. The analysis below shows an example of a situation where Havertz finds himself tasked with picking out a key pass rather than getting into goal scoring positions. While he is more than capable of playing here, Lampard may be missing a key part of Havertz’s game, his goals. 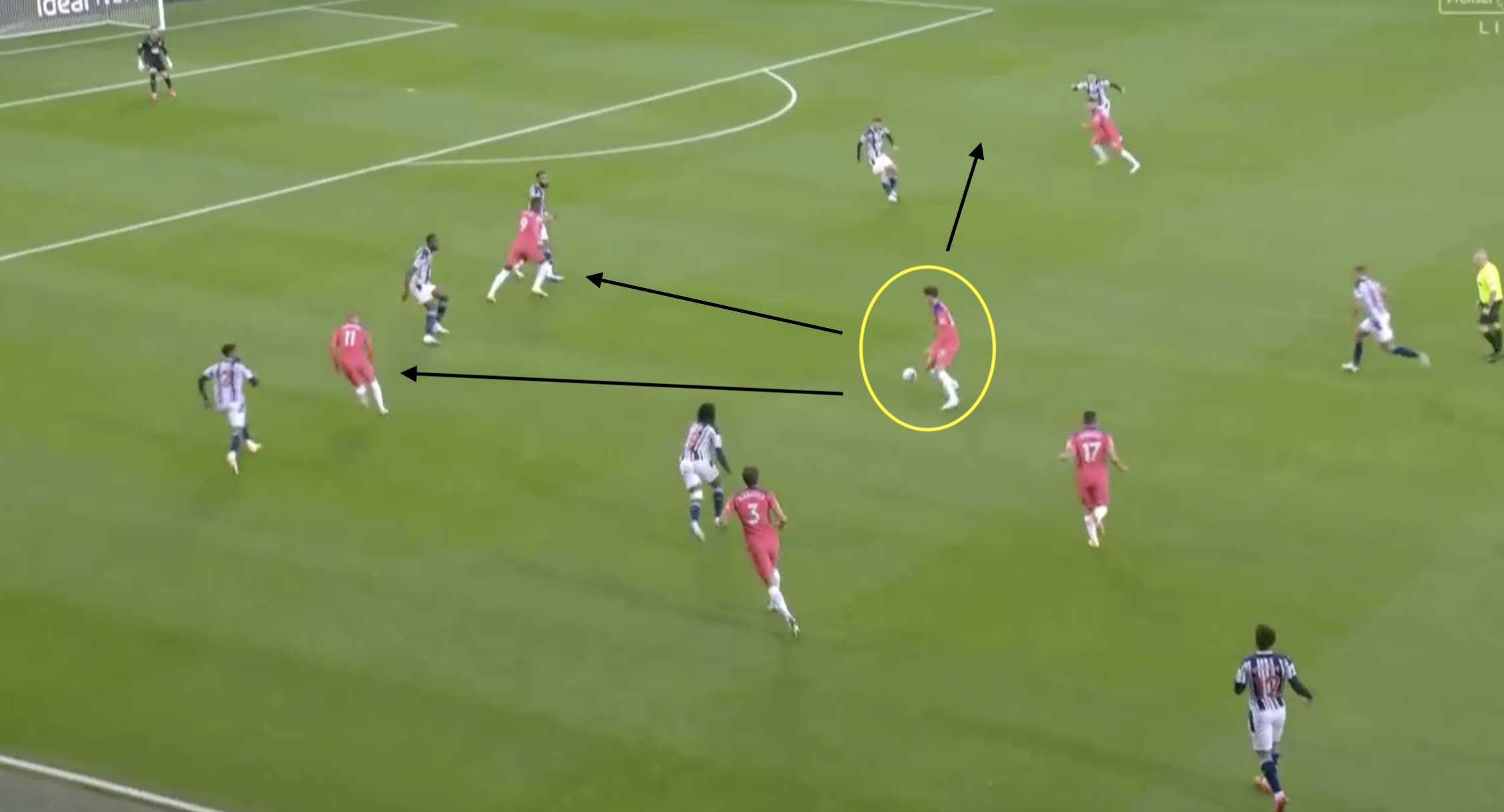 Frank Lampard has a lot of pieces to choose from to complete his attacking puzzle. After the significant investment, Werner and Havertz must be big pieces to that puzzle. By playing Werner centrally and encouraging Havertz to push more into the box, there could be an opportunity for both players to strengthen in terms of play and production. Werner will be able to play off of a secondary “striker,” as mentioned earlier in the analysis; and Havertz will be able to push further into the box to score more goals instead of having to create. This will leave a job for a creative player to slot into space, which can be covered by Pulisic and Ziyech once fully fit.

Perhaps the reason we are seeing this conundrum currently is due to injuries. Once the team is fully fit, it will be interesting to see how the Chelsea team develops tactically.