Replacing Dahlkemper: Who could replace Abby Dahlkemper for North Carolina

The disruption of Covid-19 caused havoc in soccer in the United States, with many of the National Women’s Soccer League’s biggest stars leaving for Europe. Some went on loans in search of minutes, such as Alex Morgan’s short stay with Tottenham Hotspur, while others left on permanent deals. One of the biggest losses was suffered by the North Carolina Courage, who saw defensive stalwart Abby Dahlkemper leave for Manchester City, where she signed a two-and-a-half-year deal.

Dahlkemper anchored the defence for the North Carolina side that finished runners-up in NWSL in 2017 and won the NWSL Championship in 2018 and 2019. She appeared eight times in 2020 for North Carolina in both the NWSL Challenge Cup and the NWSL Fall Series. The departure of such a critical player will leave North Carolina Courage head coach Paul Riley with a big decision to make on filling the gap in his backline. This tactical analysis will look at the available options within North Carolina’s current squad, and how North Carolina’s play may have to change to deal with the loss of Dahlkemper.

Dahlkemper frequently partnered Abby Erceg at centre-back, playing as the more aggressive of the partnership. Erceg is club captain at North Carolina and also captains the New Zealand national team. At 31, she is well travelled and has previously played in Australia, Spain and Germany. She came to Chicago Red Stars in 2014 and has been with North Carolina since 2017. For three years Erceg and Dahlkemper have worked together at the heart of North Carolina’s defence.

This partnership worked well, with Dahlkemper playing as a stopper. Erceg operated in more of a cover role, allowing Dahlkemper to use her athleticism to physically challenge the striker and also step forward to intercept passes to start counter-attacks. Also, with the ball, she was more willing to step into midfield to help build the attack and provide an extra passing outlet to increase her side’s press resistance.

The graphic below shows how well Erceg and Dahlkemper play together. Erceg stays back and covers the backline, while Dahlkemper steps forward to challenge the aerial ball. She’s able to force the ball backwards, and Erceg stays in position to ensure that the opposition cannot get behind the defensive line. 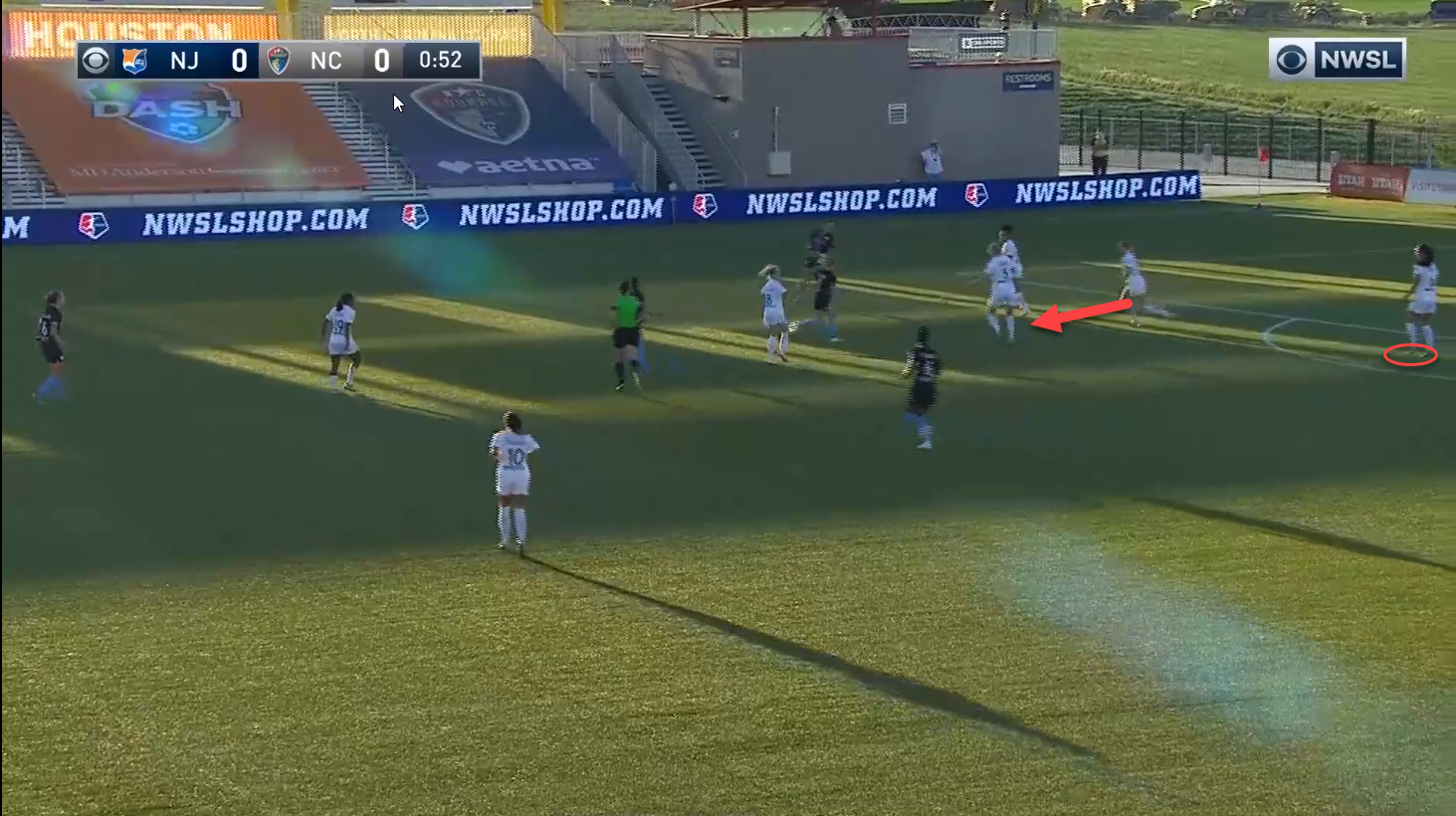 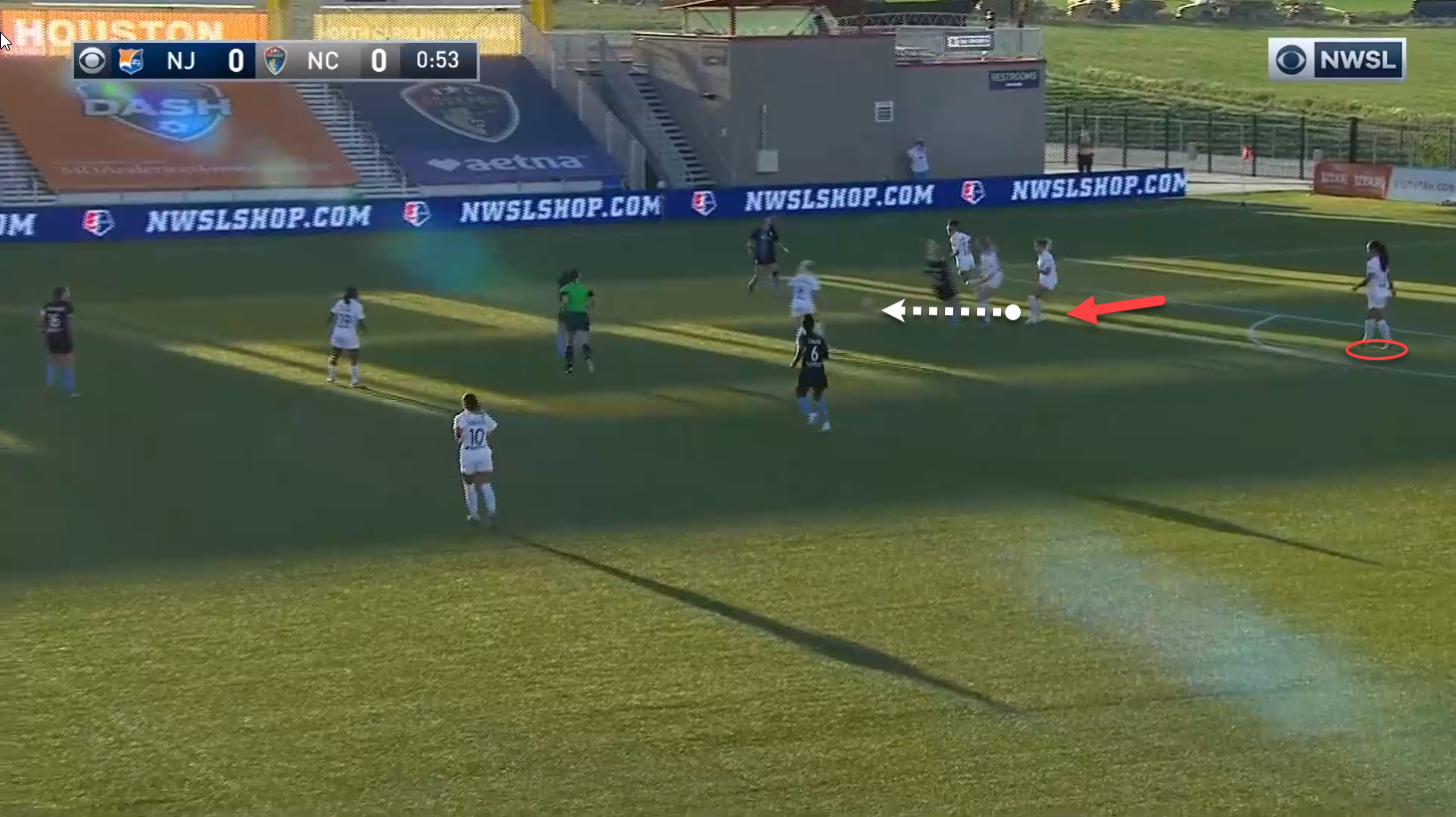 Erceg should continue to start as the left-sided centre-back. On the right side, there are several options available in the squad who could start alongside Erceg.

One of the available options at centre-back is 22-year-old American Sinclaire Miramontez. She was selected as the 27th pick of the 2020 NWSL Draft by North Carolina, coming from the University of Nebraska. She made her debut for the club on 4 October 2020, coming on as a substitute during a 4-1 loss to the Houston Dash. Those 13 minutes have been her only professional experience so far, but she made 76 appearances for the University of Nebraska Cornhuskers in the NCAA soccer.

During her time at Nebraska, she would frequently play a role similar to Dahlkemper for the Cornhuskers. Her passing skills aren’t nearly as refined as Dahlkemper, but that is something that should improve with additional playing time. Defensively, she’s strong in the challenge and aggressive at recovering the ball when the opposition tries to play between the lines. 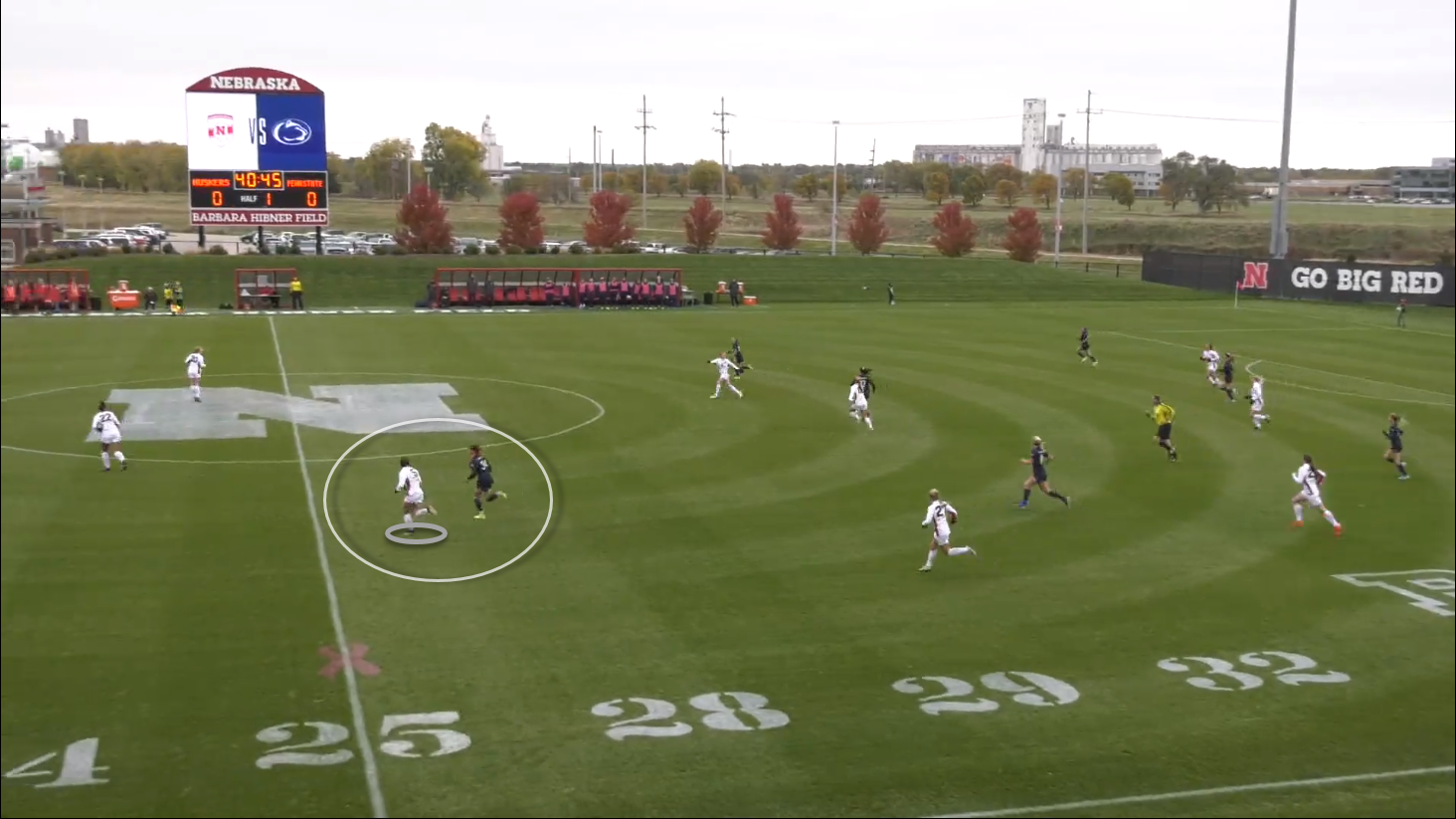 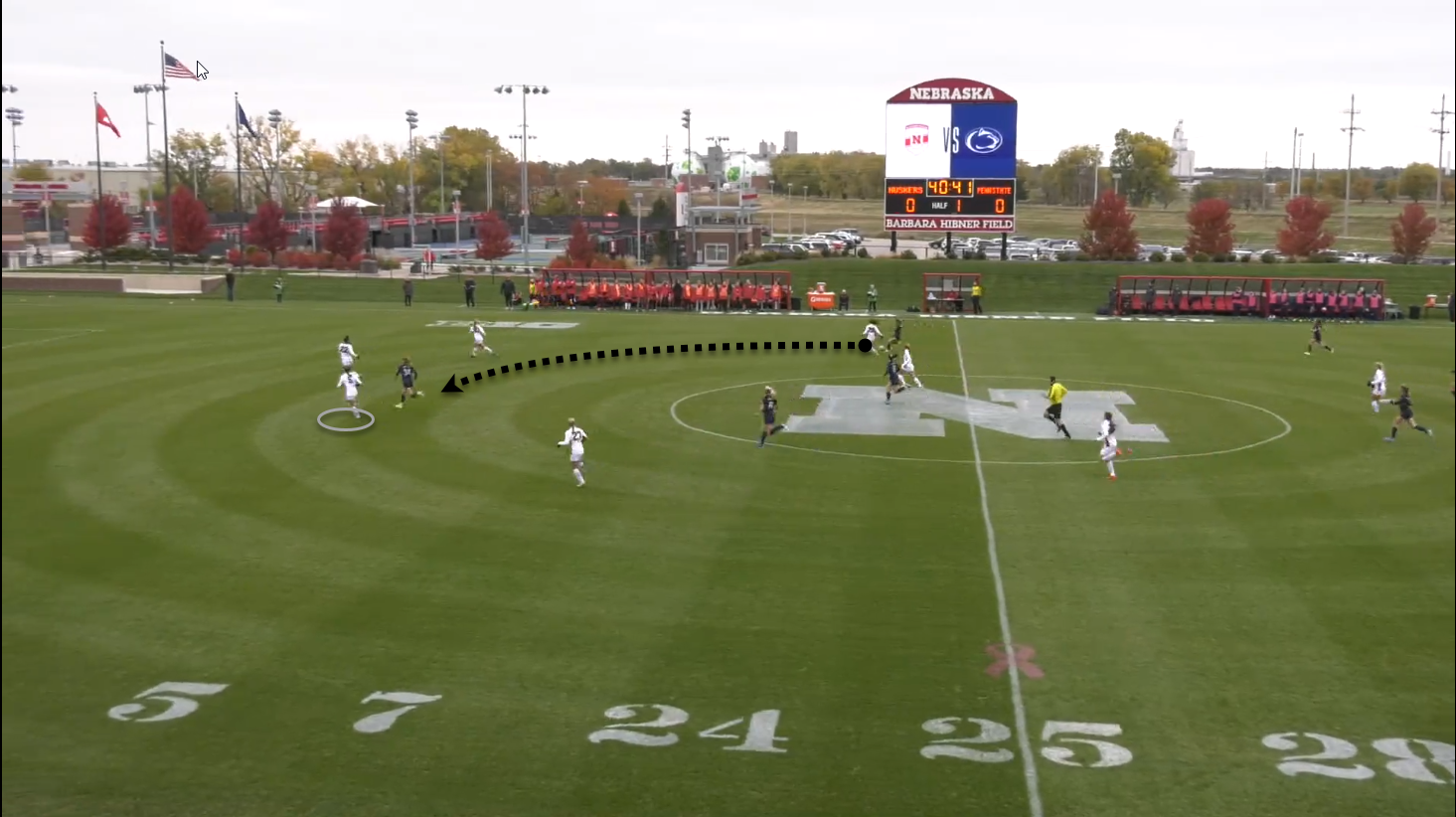 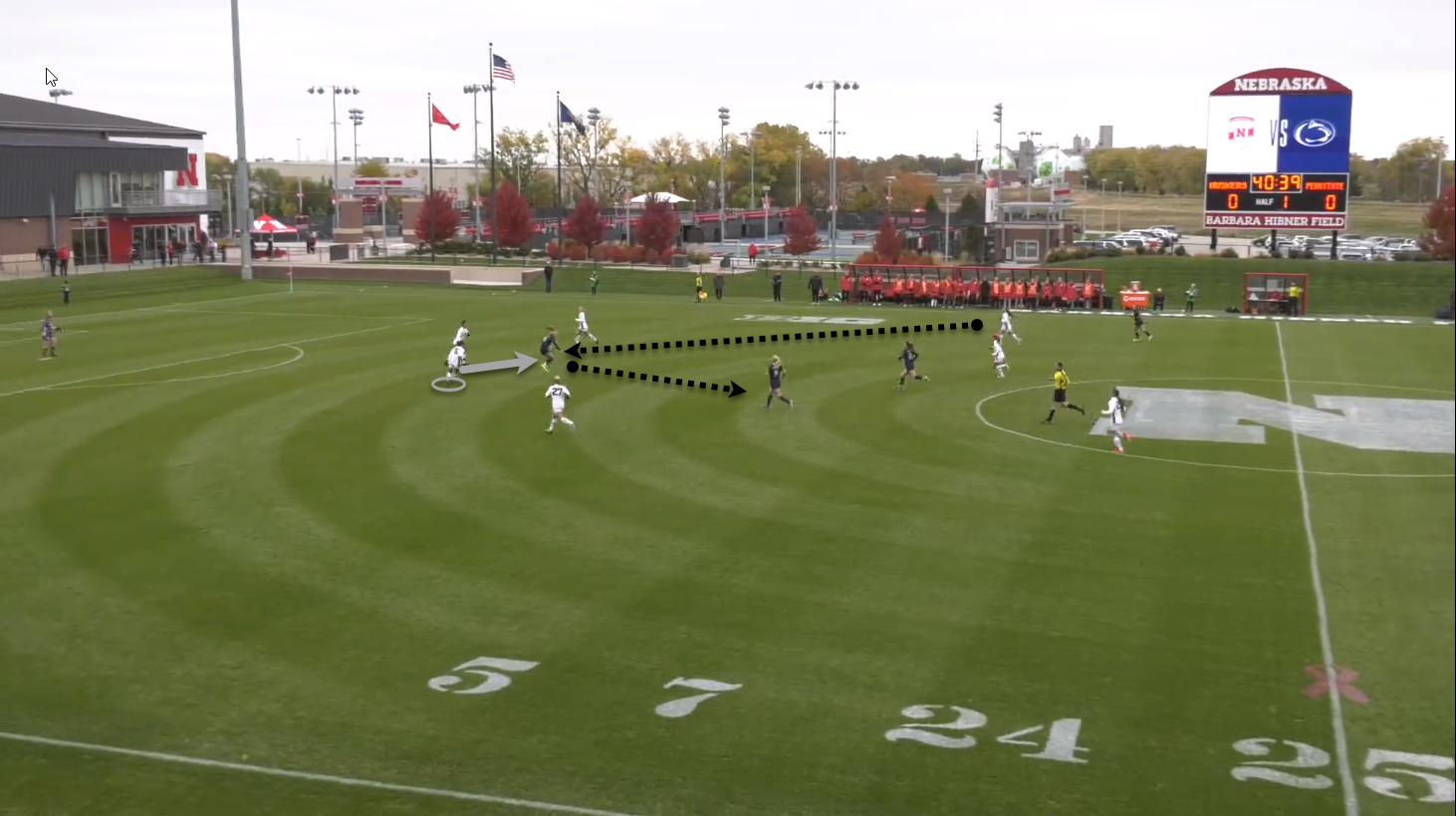 The graphic above shows Miramontez reading the attack well. She tracks the striker as they try to break forward at speed. When the opposing winger tries to curl a ball into the striker, Miramontez gets tight to the striker and forces the ball back. This counter is slowed and nothing comes of it.

Her aerial abilities seem to be slightly better than Dahlkemper’s, which is impressive as she should continue to develop. She averaged .5 more aerial duels per 90 minutes than Abby Dahlkemper, while also having a higher success rate. The young Miramontez also averaged 4.8 interceptions and 4.57 clearances per 90 minutes, a considerably higher rate than Dahlkemper averaged in 2020. While the lower quality of competition in the NCAA accounts for some of this difference, it still shows what North Carolina saw in her when they drafted her.

Another option at centre-back is 28-year-old Arianna ‘Ari’ Romero. She’s an American born Mexican footballer who 47 caps with Mexico who joined North Carolina on 9 September 2020. She played college soccer at the University of Nebraska until 2013. After her colligate career, she played in the NWSL for two years before playing in several different countries, including Iceland, Norway and Australia before returning to the United States in 2019. 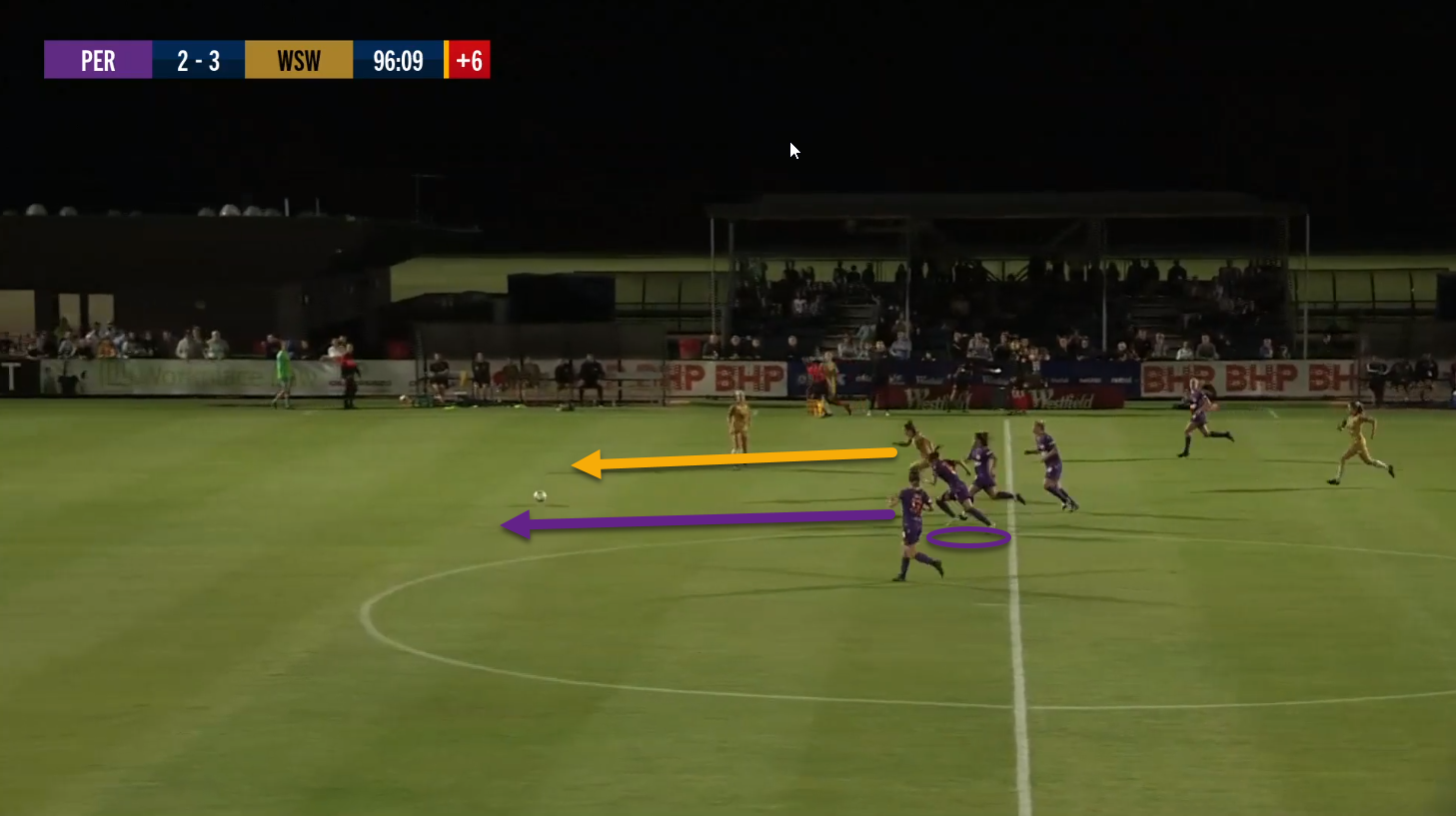 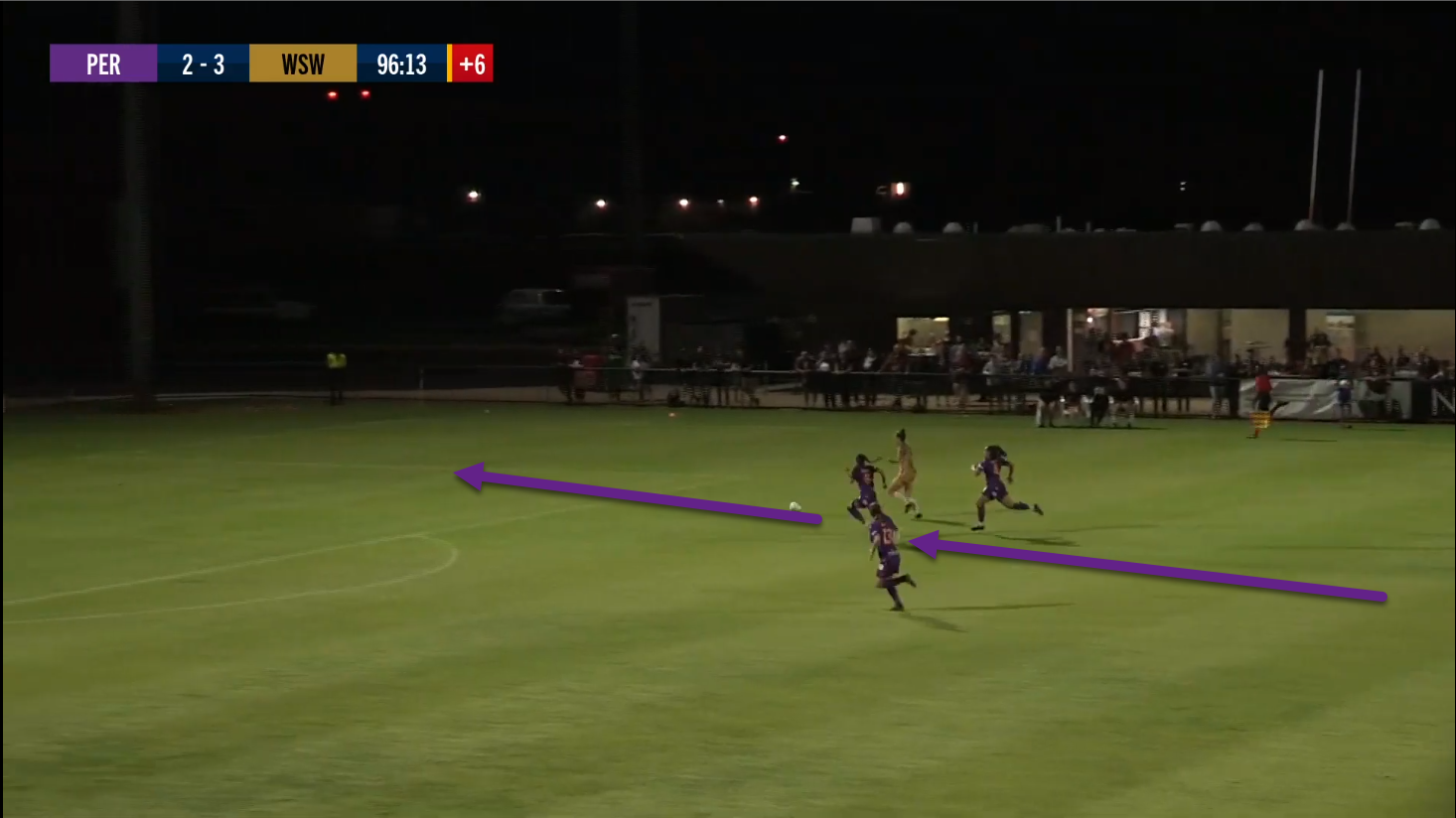 Her playing style is centred around her pace, with the ability to cover ground quickly. As shown on the graphic above, the game is winding down and the striker can dribble past the backline. Romero tracks back and eventually overtakes the striker to force the play outside. This speed eventually means the striker is forced to take a low percentage shot from outside the box.

Unfortunately, while she may be quick on her feet, she struggles in the air. Her skills on the ball also don’t quite equal what Dahlkemper has been able to provide her team. With Erceg’s lack of pace, but strength in the air, Romero would be a good partner. Erceg would be forced to carry more of an offensive role than she has in past years, but her performances with New Zealand have shown that she can play quality forward passes when needed. With Dahlkemper next to her, she has never been needed to play this role.

The final option within the current North Carolina squad to replace Abby Dahlkemper is Kaleigh Kurtz. After playing three years at the University of South Carolina, she spent a year in Sweden, making 12 appearances for Östersunds DFF in 2017. She returned to the United States in 2018, joining North Carolina Courage where she has made 15 appearances. During the NWSL Fall Series, she filled in at centre-back when Erceg or Dahlkemper was unavailable.

Kurtz is the best all-around centre-back option available for coach Riley. She is good in the challenge, both in the air and on the ground, but she doesn’t quite have the pace of Romero. Additionally, her passing range is rather limited but she can be counted on as a solid defender.

Kurtz shows the aggression in defence that Dahlkemper was known for at North Carolina. She’s quick to step forward in a challenge. In the graphic below we can see that she steps forward to challenge the ball, and continues to pursue the ball as it’s moved to a midfielder on a late run. She does well to forward the midfielder outside, and eventually forces a poor cross attempt that goes out for a goal kick. 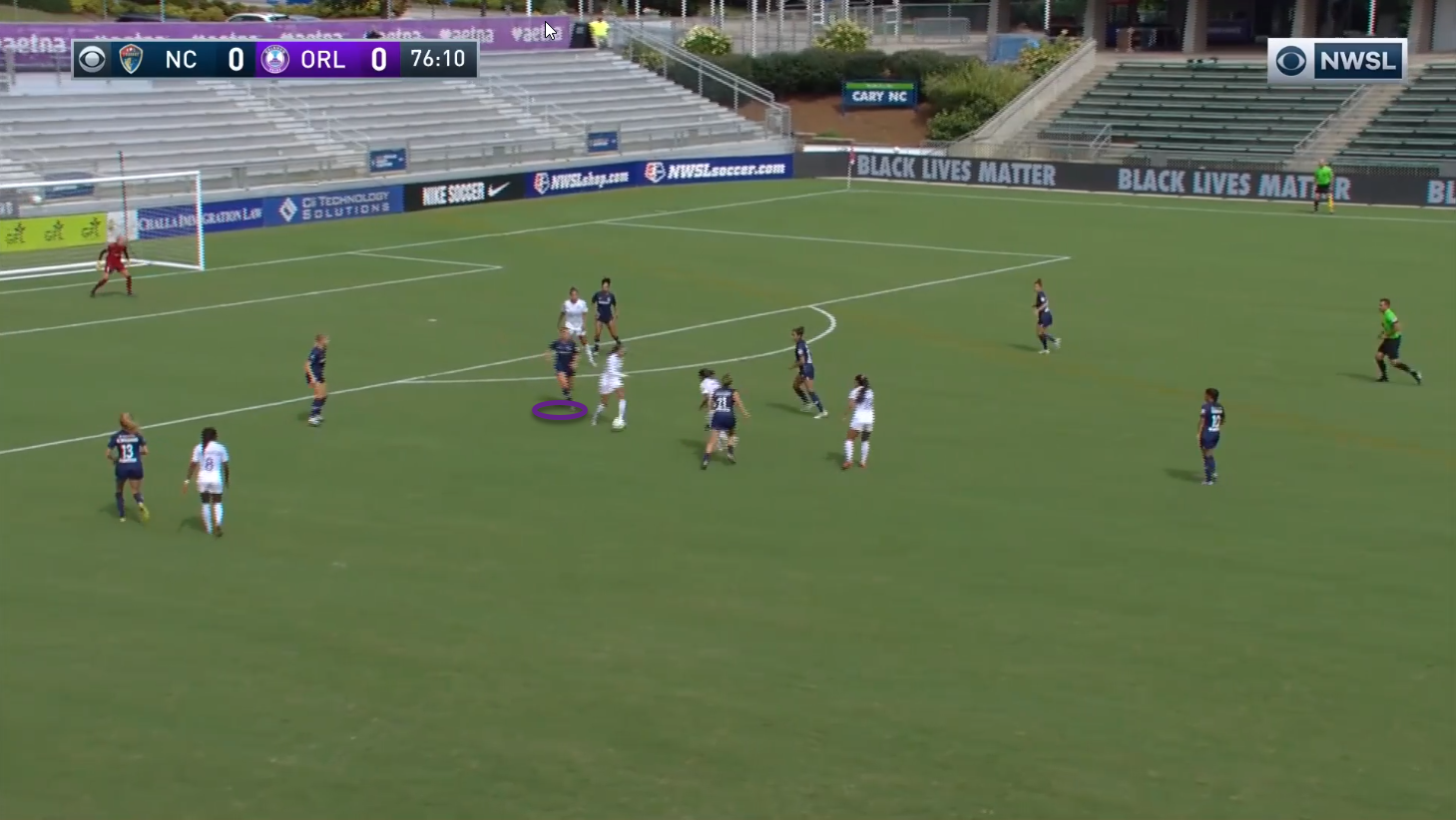 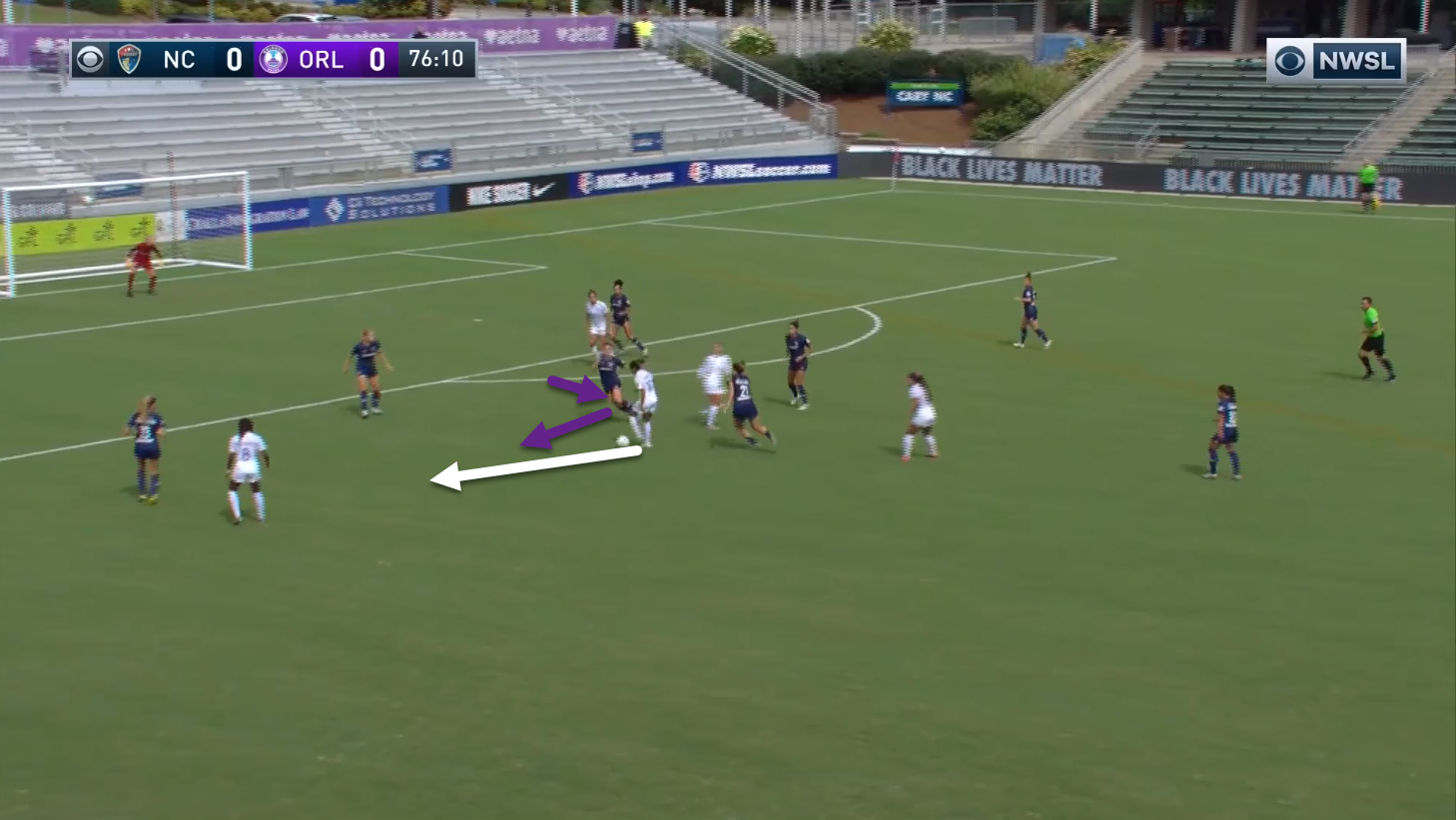 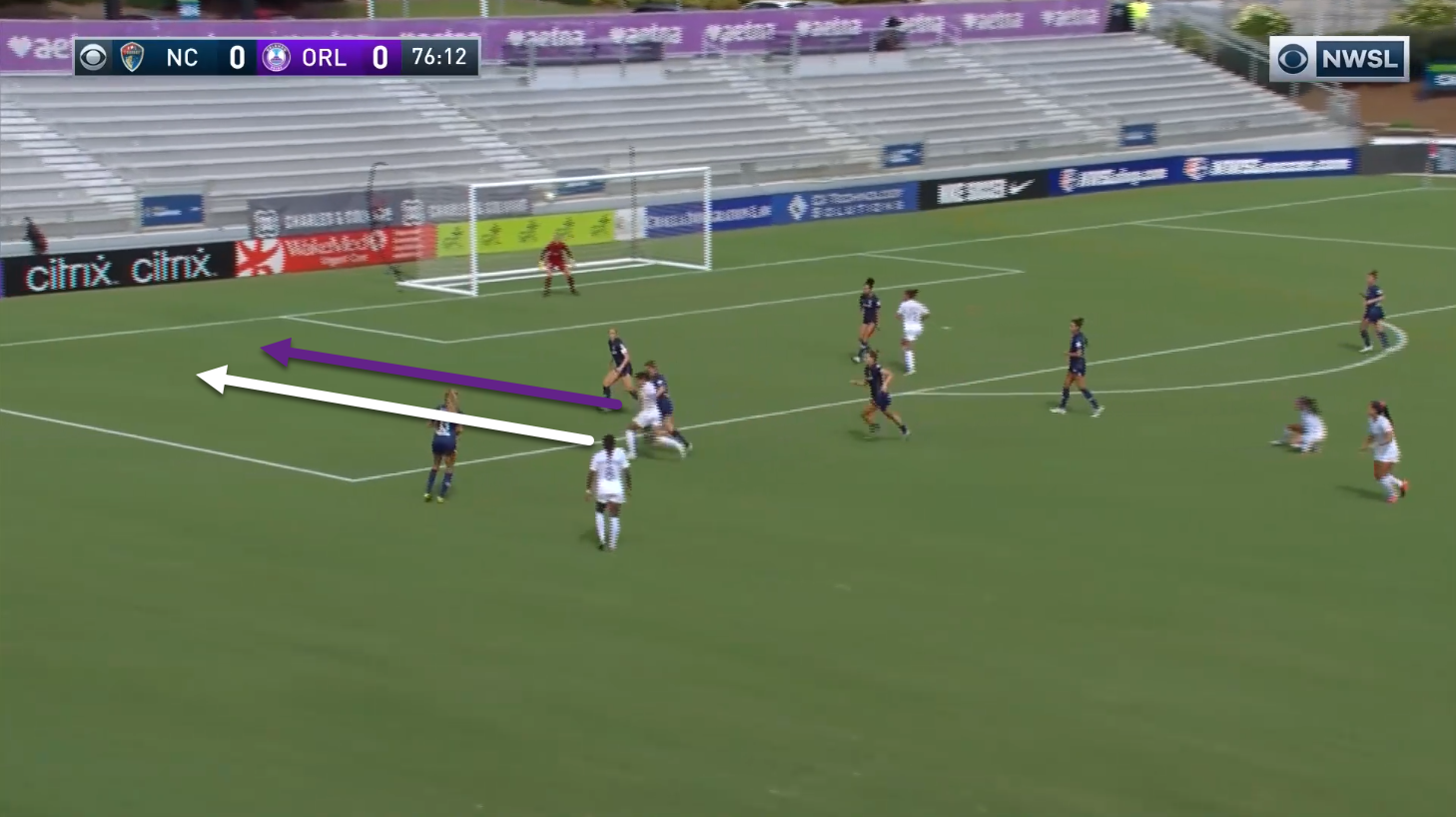 North Carolina will suffer after losing one of the best defenders in women’s football, but they have plenty of options internally to try and minimise the effects. With Abby Ercez still in the backline, there is an opportunity for her to become more involved with the ball, helping to build the attack. With her quality on the ball, this would allow North Carolina to use their more basic central defending options. The best option as a pure defender would be Kaleigh Kurtz, as she is the best defender. The problem with this pairing would be a lack of pace. It would make it hard to defend with a high line, but they would be strong in the air. Also, Erceg reads the game well and could negate some of the issues with the lack of pace. All three players may get a chance to claim the starting spot, but at the moment it seems like Kaleigh Kurtz would have the best chance to claim Dahlkemper’s spot.