Cecilio Domínguez is a 26-year-old left winger from Paraguay who recently signed for the new MLS club, Austin FC. The Paraguayan has had multiple experiences in strong leagues in North and South America, playing for Club America in Liga MX and most recently Independiente in the Argentinian Superliga. This signing represents a more established player who has lots of game time in elite competitions. Domínguez won the Liga MX while at Club America, a feat Austin FC will hope he can replicate by lifting the MLS Cup.  He is also a player who molds Josh Wolff’s vision to play attractive attacking football.

Domínguez provides not only club experience, but also international experience with his country. The winger has earned 17 caps for Paraguay. This involvement in international play is similar to Austin FC’s first-ever signing, Rodney Redes. Interestingly, Redes is also Paraguayan, which creates a connection to Austin FC’s signing of Domínguez. Even more interesting is Austin FC’s decision to loan him immediately to Guaraní, the club that Redes will finish the 2020 calendar year with. This move by Claudio Reyna, the clubs sporting director (and also former Manchester City and Rangers player), is incredibly smart as he hopes they will start to build footballing chemistry even before starting training in Austin in early 2021.

This scout report will look at Domínguez’s individual qualities and an in-depth tactical analysis will examine how he could fit into Wolff’s tactics in Austin.

Domínguez is a player who enjoys cutting in on his preferred right foot from the left-hand side of the pitch. As Wolff, builds out his team, it will be important to determine how he wants to attack the spaces in behind and around the edge of the box.

What the Paraguayan provides is a dynamic winger who has an eye for goal. While he does tend to stay wide, possibly when his team is in possession, Domínguez likes to get in between the half-spaces and use his pace to beat players and drive into the box. This will be highlighted later in the scout report when analyzing Domínguez shot production.

The heat map below shows where Domínguez likes to station himself while on the pitch. The key area that is important to note is the half-space. This space in between the wings and the middle of the pitch is where Domínguez can be most dangerous. In 21 appearances for Independiente during the 2019/20 season, he scored two goals and two assists. This number is surprisingly low, and Domínguez can do better. By encouraging him to occupy the half-space to drive into the box, perhaps with an overlapping wing-back, Austin FC could maximize the Paraguayan’s output. 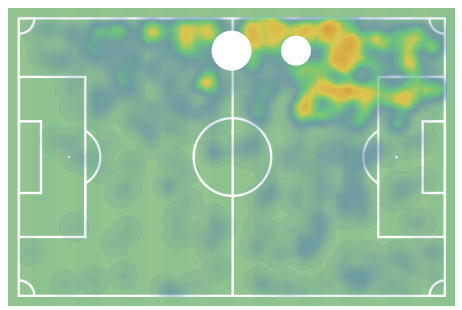 The analysis below provides an example of how Domínguez utlises other strong parts of his game such as his dribbling, pace, at shot creation to his advantage by positioning himself in the half-space. Here, he receives the ball and is faced with two options: either beat his man or play the overlapping runner. Domínguez knows that he can drive towards the box for a shot and effectively beats the defender. Because there is an overlapping runner, the defender is off balance and the Paraguayan can use his positioning to his advantage. 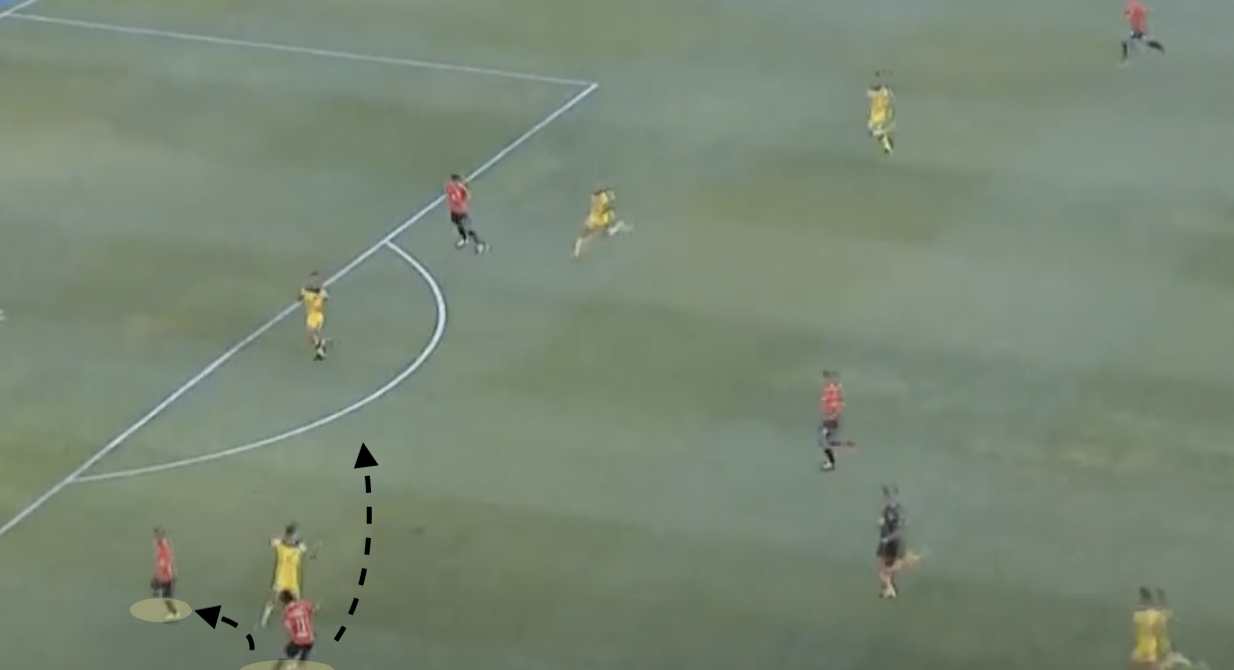 This action resulted in a shot on target for Domínguez from just outside the box. Obviously, this is a typical tactic, but this is a sequence that needs to be implemented more for Domínguez to get on the scoresheet. 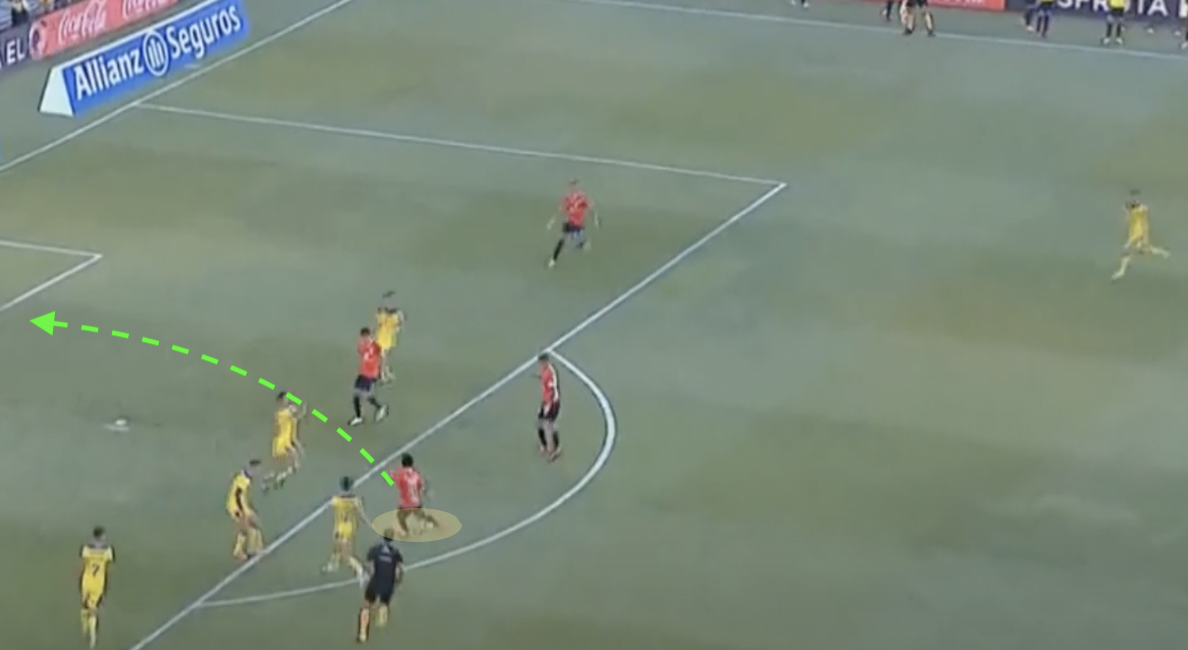 When compared to other central-midfielders and wingers in the 2019/20 Superliga season, he finished in 9th for the total number of shots with 36 shots, averaging 2.41 per game. His xG when shooting (expected goals) was only 0.08, showing there is tremendous room for improvement. There is no reason why a player who averages 2.41 shots per game is not scoring more than two goals in a season.

In order to solve this clear absence in his game, it will be important for Austin FC to mold to Dominguez’s style. It is crucial they allow him to push forward and drive towards goal, specifically inside the box where he is more dangerous.

A recurring theme we are starting to see with Austin FC’s side as they begin to add signings is the belief around a commitment to the team. Perhaps this is why Reyna and Wolff are targeting the South American region, which historically develops head-strong and committed players.

Just like Rodney Redes, Domínguez is no stranger to the words hunger and desire. The winger constantly shows his work-rate on the pitch and his recovery statistics back up this claim.

Specifically when Domínguez is in the final third is where his best defensive work comes into play. This is important because as Austin FC are looking to build a dynamic and high energy side, Domínguez will be a strong contributor in this department. Below shows 17 different occasions when the Paraguayan won the ball back when in the final third of the pitch. Out of 17 recoveries, 8 of them resulted in a shot, with 3 of them being on target. One instance resulted in a goal for Domínguez’s side. 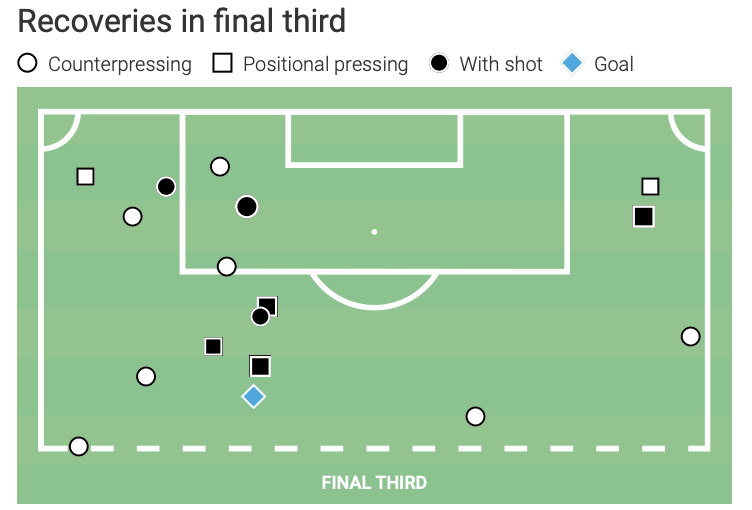 What is significant is his performance in this area compared to the rest of the players in the Superliga throughout the 2019/20 season. In terms of dangerous recoveries, or recoveries that led to a shot (on target) or a goal, Domínguez had 0.71 dangerous recoveries per 90 minutes. If he can replicate this form in the MLS, Wolff has a player who is not only strong in the half-spaces but hungry when trying to win the ball back for his team.

It was highlighted earlier in the analysis that one of Domínguez’s main strengths is his shot creation. The reason for this is his positioning and hunger, making him an ideal candidate for Wolff’s Austin FC side. While this section may not make as many new points, it is important to analyze Domínguez’s finishing ability from a holistic perspective.

We know why the Paraguayan finds himself in these situations (because of his positioning and hunger) but the tally does not add up. Again, Dominguez registered 36 shots last season. 15 of those shots were on target, leading to 41.7% of his shots at least testing the keeper. The shocking statistic still lies in only a 5.6% goal conversion rate. Even at a slightly higher rate, Domínguez could add a few goals to his game which would completely change his level of output.

The goal distribution chart below shows where most of his shots are going. While there are instances of good shot selection, a large number of shots are finding the middle of the goal, which is where the keeper does not have to move. In terms of shot creation, Domínguez does a fantastic job, but his finishing ability does not match up. It is clear that Wolff sees his potential to at least get into these goal-scoring positions, something that is not easy to come by. With more experience and focused training sessions, Domínguez could quickly turn into a very dangerous winger.

An example of Domínguez scoring last season can be seen in the analysis below. Here, he is starting in a fairly natural position in the half-space as his teammate dribbles down the opposite wing. Then, within a blink of an eye, Domínguez starts his forceful run into the box. He darts by the inside shoulder of the right-back, leaving him no chance to react.

This perfectly timed run combined with Domínguez’s pace and hunger resulted in a fantastic goal for his team. Actions such as these are how to get the best out of Domínguez. Because he is a hungry attacker of the ball, he can constantly get into threatening positions. Additionally, the Paraguayan is a fine header of the ball too, making time a threat from a cross from the opposite flank. With his dangerous ability to find great positions, there is no doubt Domínguez has a bright future with Austin FC. 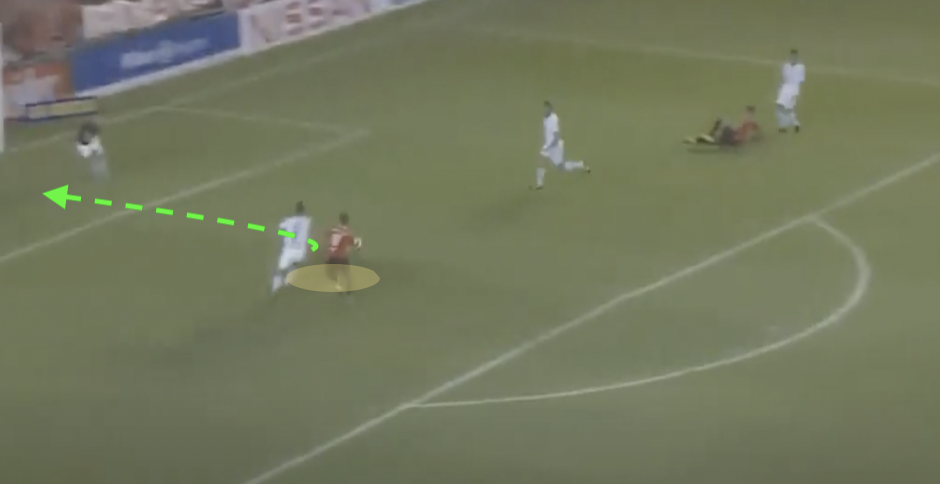 This scout report highlights areas of Domínguez’s style of play that align with Austin FC and their vision of energetic, dynamic attacking football. It will be interesting to see if Wolff can get the best version of Domínguez when playing him alongside Rodney Redes. It is definitely a smart decision to loan the Paraguayan out to Guaraní to establish the footballing connection early on before they link up in the United States.

From this analysis, it is clear that Domínguez can create chances and has plenty of desire. He fancies himself in the box and is willing to put in a defensive shift for his team. Only time will tell if this first designated player signing by Austin FC will be fruitful in terms of attacking production, but it is clear Domínguez is a strong signing.