Ligue 1 was one of the first top leagues to start. That is why they are already in their matchday 4 and we can start seeing how most teams are shaping up for the season. In this game, both teams were in a good run, having won both of their last two games.

Rennes and Monaco played out an exciting game that ended in a victory for Rennes in the final minutes. This is a special season for Rennes as it is the first time they play UEFA Champions League and so have to start the league well to prepare. So far, they are doing well, drawing the first game and winning the next three. Hopefully this year they can give the dominant PSG more of a fight in the league.

On the other hand, Monaco this season wants to return to their glory days as they have not performed well in the past seasons. Nonetheless, they have a high-quality team with the likes of Wissam Ben Yedder and Cesc Fabregas leading the team. In this game, they were winning for the majority of the match but lost the game in the last minutes.

In this tactical analysis, we will analyse the tactics used by both teams and how they changed throughout the game. This analysis will show how both coaches maximised the potential of their players in their tactics and how this benefits their style of play. 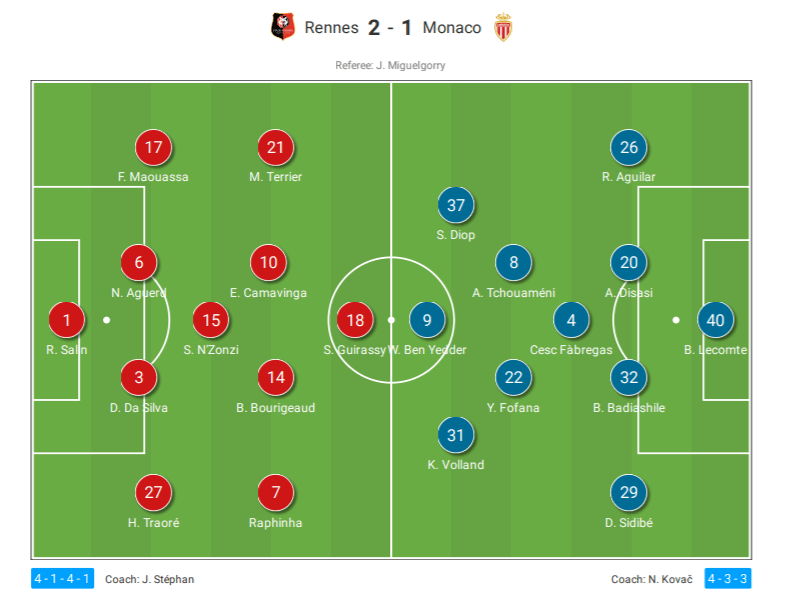 Rennes played in a 4-1-4-1, with Steven Nzonzi lining up behind Eduardo Camavinga and Benjamin Bourigeaud. Out wide were Raphinha and Martin Terrier accompanied by the full-backs Hamari Traoré and Faitout Maouassa. Lastly, to lead the attack was Serhou Guirassy.

Monaco started in a 4-3-3 formation, with Wissam Ben Yedder spearheading the front three, followed by the new signing Kevin Volland and Sofiane Diop. To provide support for Cesc Fabregas were Youssouf Fofana and Aurélien Tchouaméni. Then, to go up and down the wing were Rubén Aguilar and Djibril Sidibé, who played as left-back but is right-footed.

Movement in the right-wing

It was interesting to see how both teams used the same tactic on the right wing to create space. When the ball was on the other side, the right-winger would go inside and take with him the opponent’s left-back. This left a big gap in the right flank which was for the right-back to take advantage of.

On most occasions, the opponent left-winger was not aware of this movement and so did not defend the right-back, which made him have the whole right flank to run into. This is a really effective way to switch the play because you can condense the play on the left side and when the time is right, switch it to the right side.

A clear example is in the image below, where the Rennes right-winger makes a run through the middle to take the left-back with him. Consequently, you can see how much space that leaves the right-back in and Nzonzi passes it to him as this was a premeditated move. 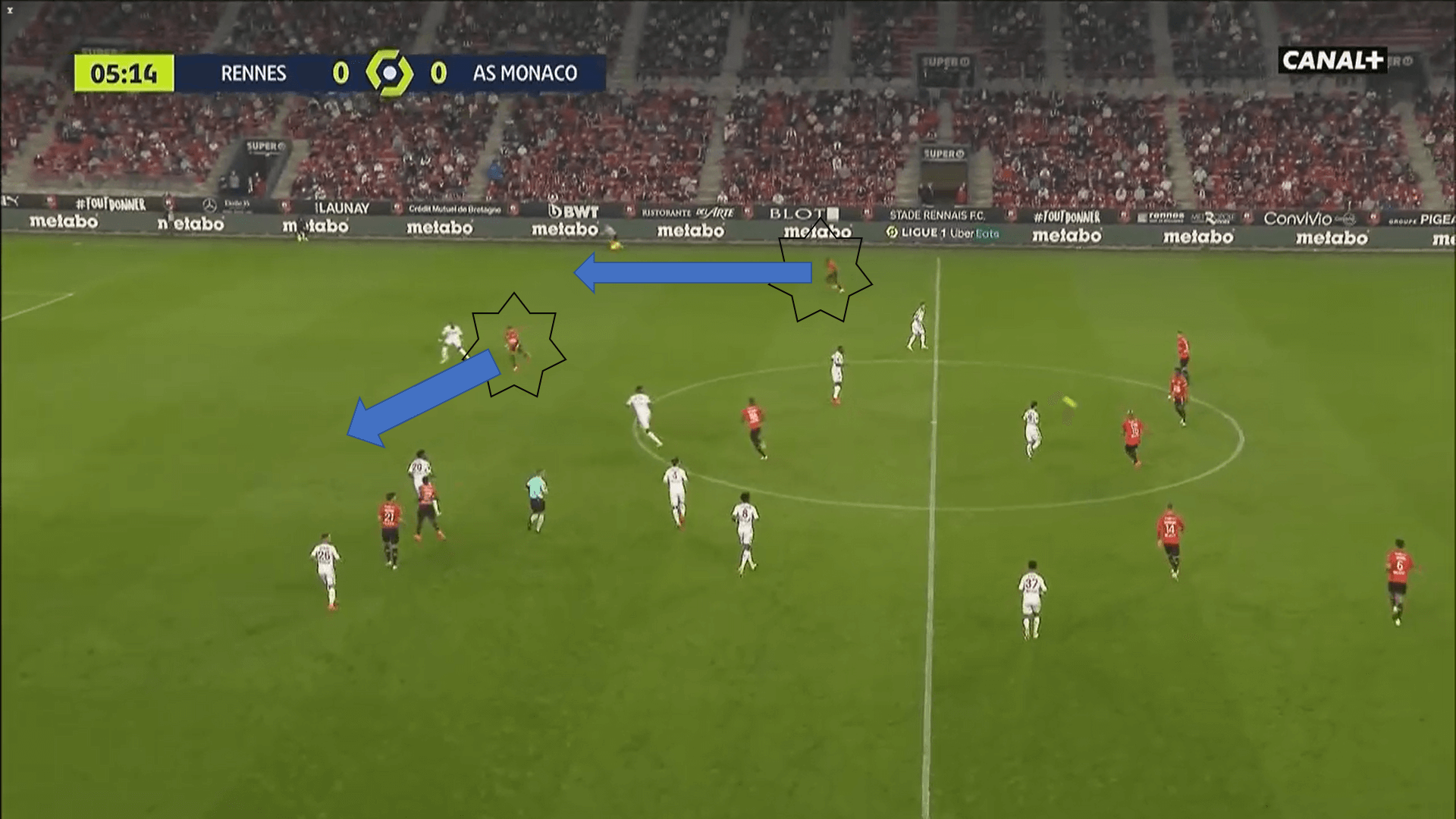 It was interesting to see how this did not happen in the left-wing for Monaco. In this flank, they preferred the left-winger to remain wide because their left-back was Sidibé who is right-footed and so has more trouble creating danger via overlapping runs down the left flank.

We see in this image how Volland is the one staying wide with Sidibé behind him. At the same time, in the other wing, the opposite is happening as the right-winger is coming inside and the right-back is going forwards. 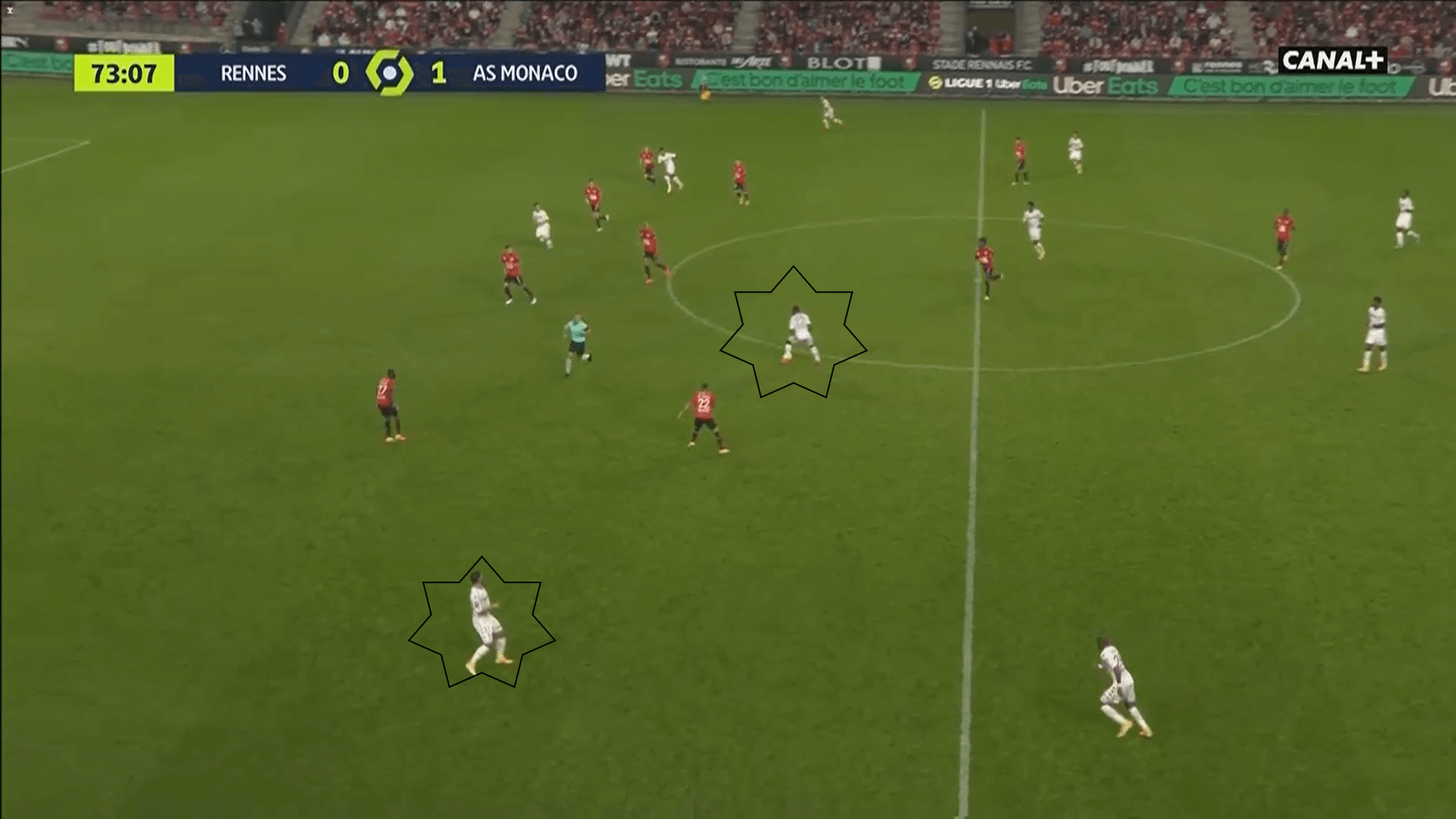 Both teams pressed high along the match, with Rennes doing a better job, having a PPDA of 12.6 compared to Monaco’s 20.4. PPDA is passes per defensive action so the lower the number, the more aggressive the press.

However, this low PPDA for Rennes is also partly due to them being behind for most of the second half, so they needed to press high to recover the ball quickly and score. This is why in the second half, they had a PPDA of 8.4, showing the high intensity they had in stealing the ball from Monaco.

Now we will analyse how Rennes press. As we can see below, the sole striker stands in between the two centre-backs, to split them and so the centre-back in possession can only focus on his flank. Then, the two midfielders each man-mark an opponent, with Camavinga moving more forwards and marking Fabregas.

This is done while Nzonzi steps up to cover the remaining Monaco midfielder in their 4-3-3 formation. After, the wingers come inside to protect passes through the middle, but they do so while being attentive to the opponent full-back. 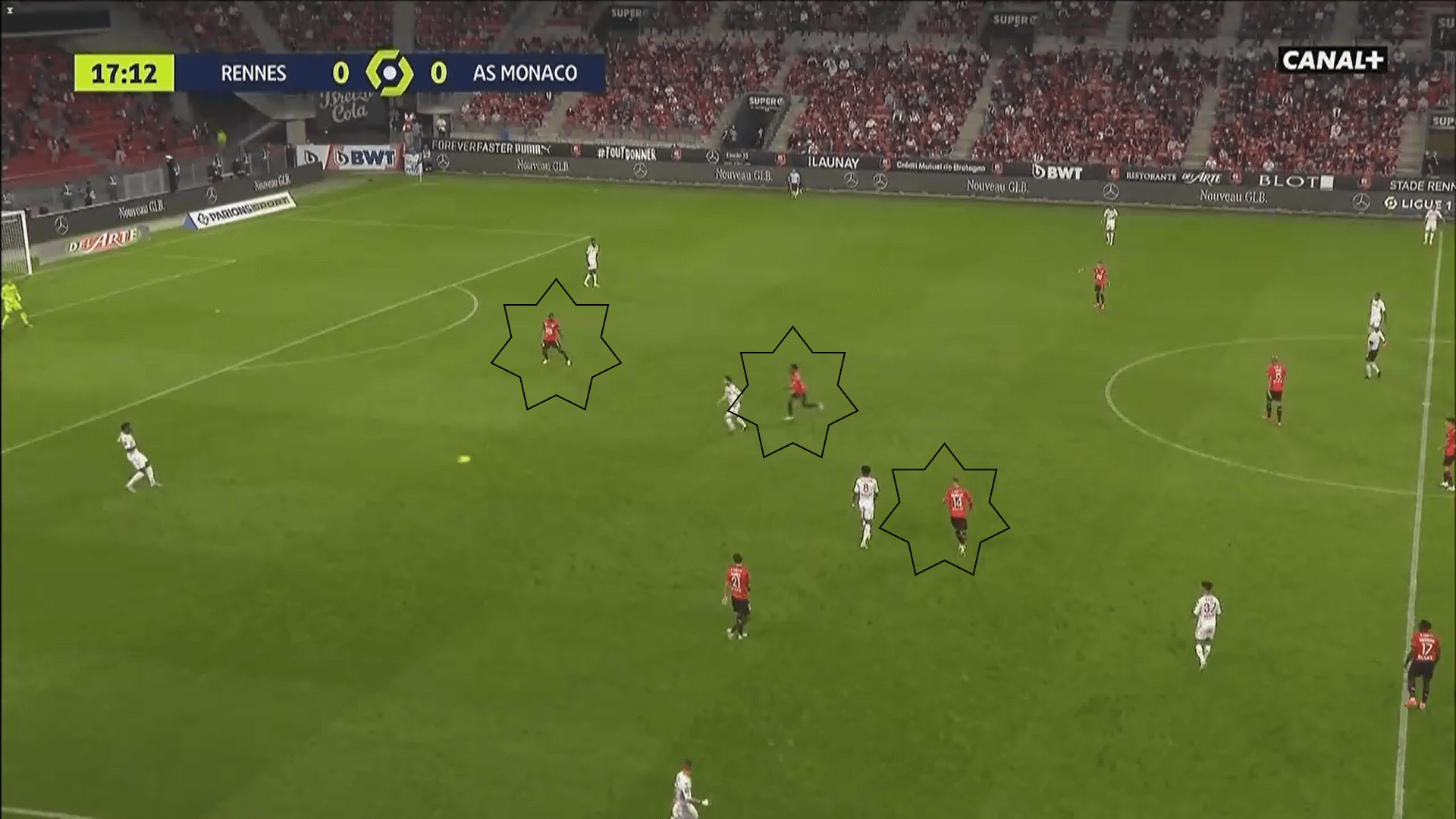 Next, we will see how Monaco did their pressing, which was less effective. Looking at the image below, they relied on their right-winger to press the left centre-back, which left the Rennes left-back free. After, we will see how Rennes used this to their advantage. 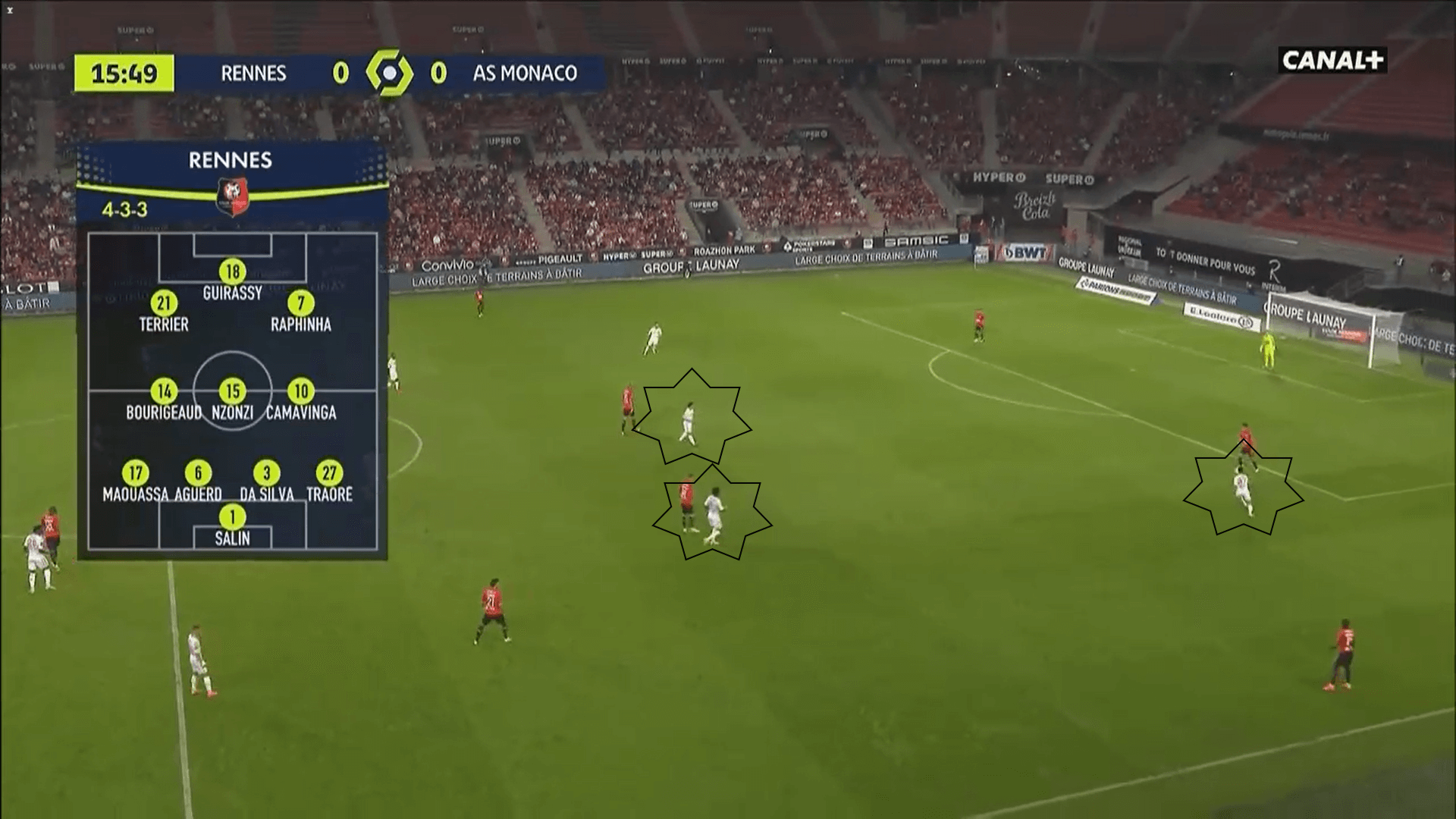 Midfielders in the build-up

Both teams have midfielders of a very good level. Monaco has Cesc Fabregas who is a world champion and has played for clubs like Barcelona and Arsenal among others. Then, Rennes has the young talent Camavinga who recently made his debut with the French national team and Nzonzi who is also a world champion.

Therefore, both teams want to take advantage of their midfielders and use them to make an effective build-up game. In Rennes, the midfielders are very involved in the build-up, especially Nzonzi and Camavinga.

Since Nzonzi is more defensive, he drops a lot and sometimes puts himself between the centre-backs to ease the build-up. This movement of his puts 3 people in the back and creates superiority against the attackers pressing, therefore helping the team.

Along with this, Camavinga also comes down to receive the ball, turn around and create the play. In the example below, we see how far Nzonzi has dropped and how this makes a 3 vs 1 against the sole striker. 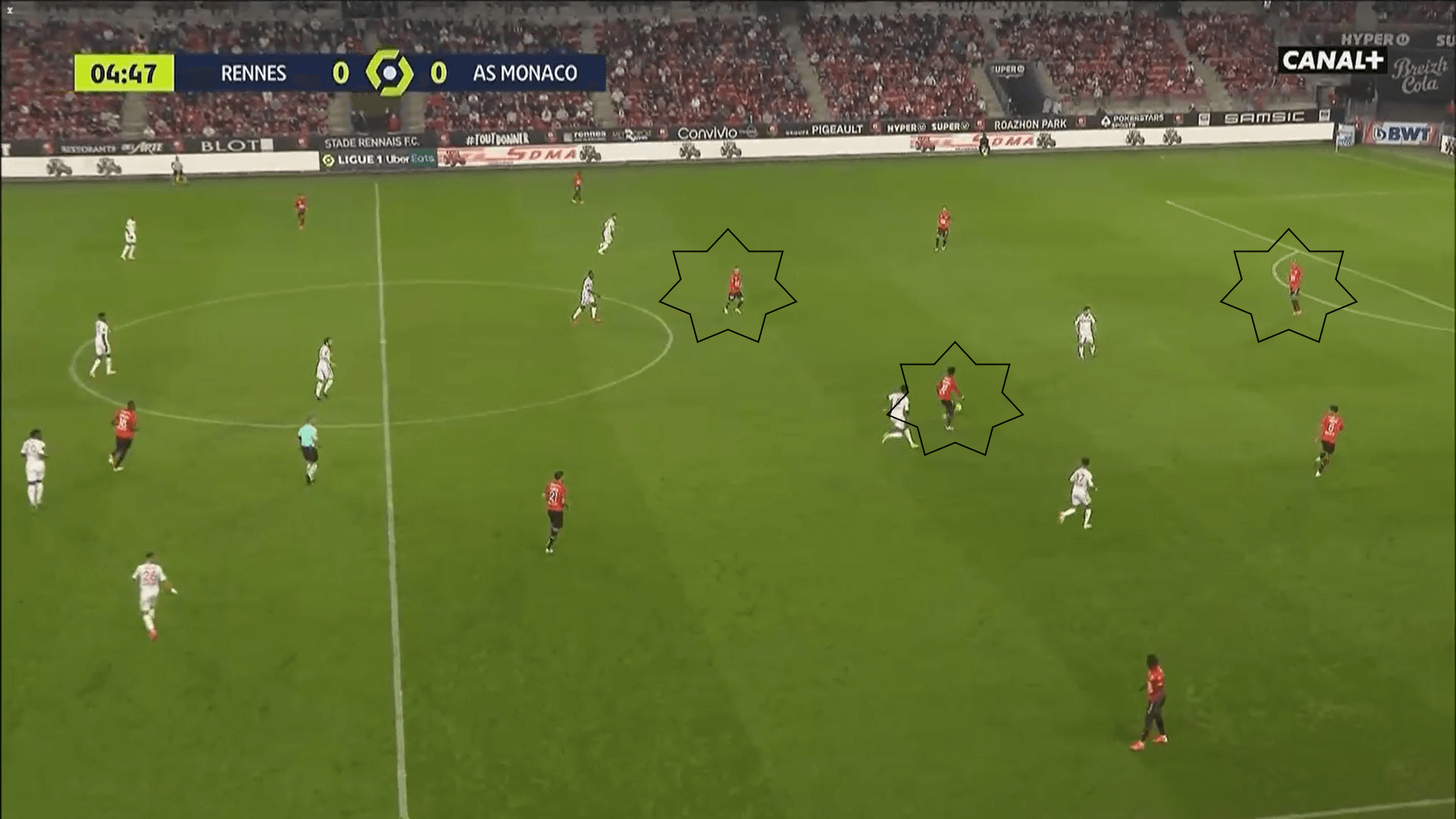 Another typical movement made by Rennes in the build-up is making a pass to a midfielder who immediately passes to the full-back that is in the direction the midfielder is facing. Before we saw how the Monaco right-winger presses by coming inside and this leaves the left-back alone.

Rennes saw this and came up with this solution. This first-touch pass to the left-back would be quick and completely break the Monaco pressure, as well as leaving the left-back with space to run into. 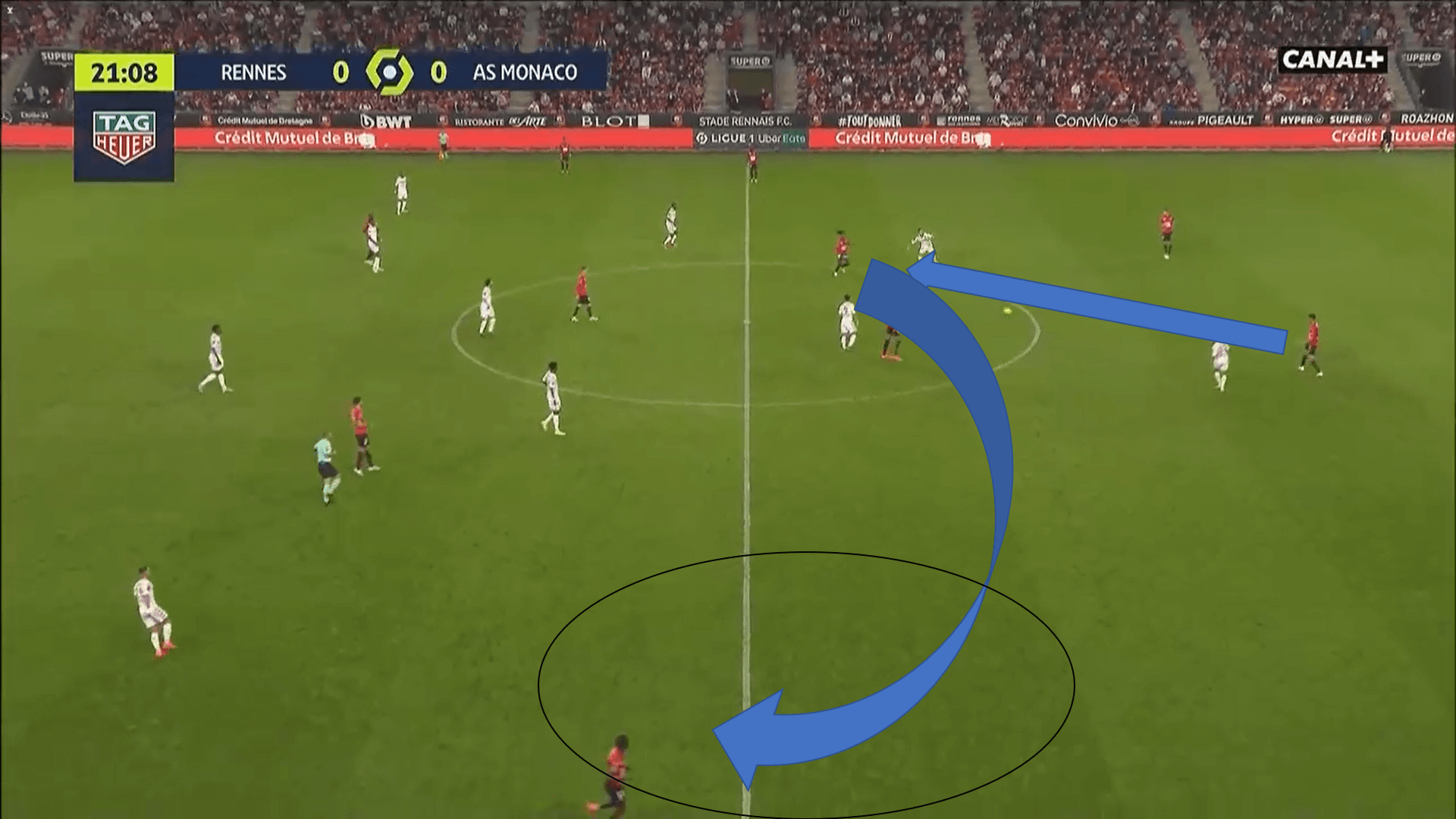 For Monaco, the main midfielder used in the build-up was Fabregas. With his technical qualities and passing abilities, he is the best Monaco player to help the centre-backs play the ball out. In fact, Rennes did the mistake in the first half of not marking him well enough. This left Fabregas with space to control, look up, and make a pass.

For example, in the image below no one is marking Fabregas. Thanks to this, he is able to make a great pass to Ben Yedder through the defence. Ben Yedder would have been alone against the keeper if he had let the ball go through but instead it hit his feet without him knowing.

Throughout the first half, Fabregas was making more of these passes behind the defence or to the wing which were dangerous. Then, in the second half, Rennes fixed this by pressuring him more often and more intensely to not give him time to make these passes. 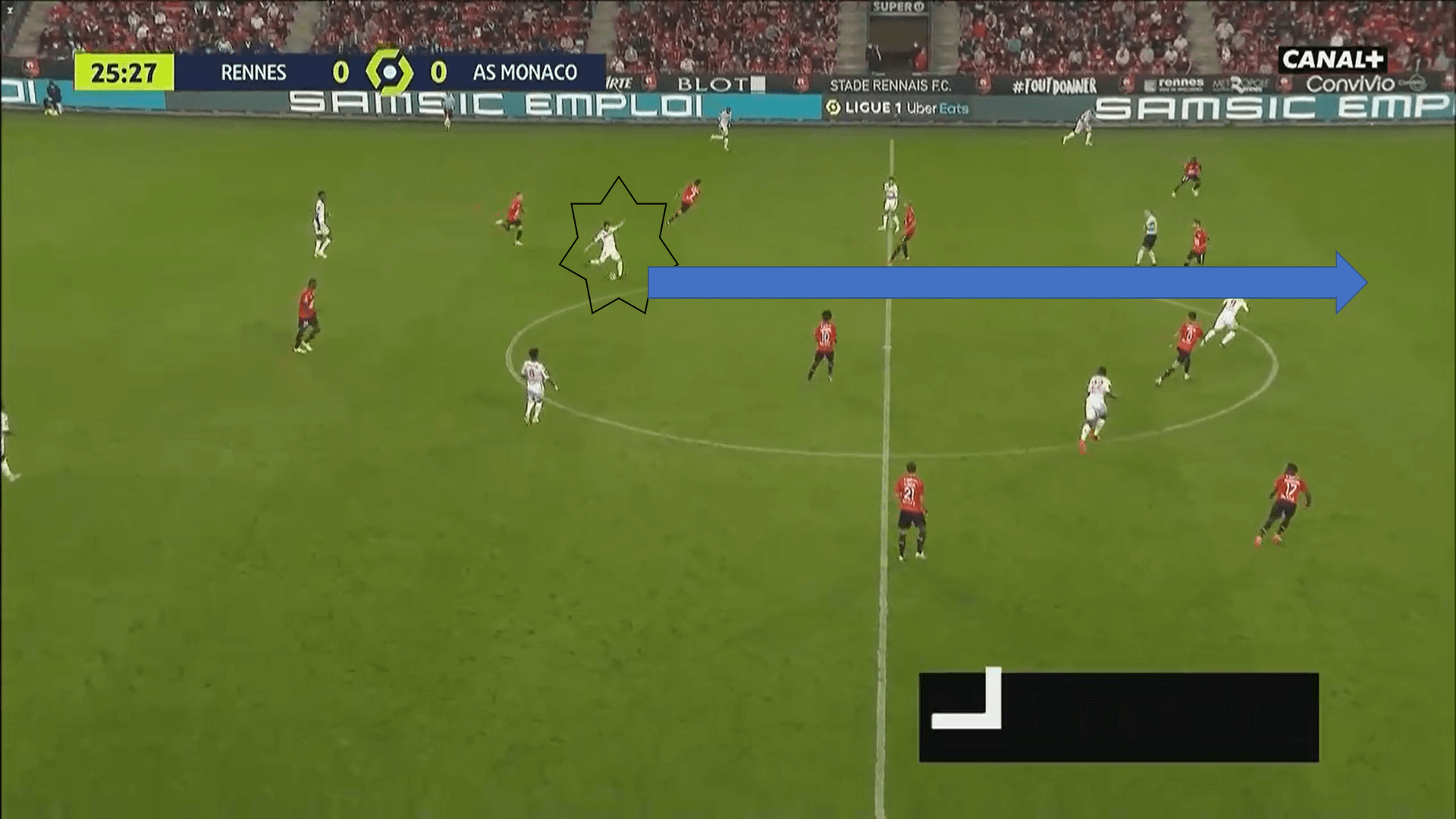 Since Rennes was losing for the majority of the second half, they had to adapt to more attacking tactics to try to score. Even though this meant more risk by getting more people upwards, it also presented more opportunities to score.

To do so, they placed their whole team higher up, with their centre-backs reaching the halfway line. This was done so that the distance between the attacking and defensive lines was not that high and to be compact even if they were higher up.

This positioning of the centre-backs can be appreciated in the image below. Also, if Monaco cleared the ball out, the centre-backs would be the first to get it and they would be able to immediately start another attack. 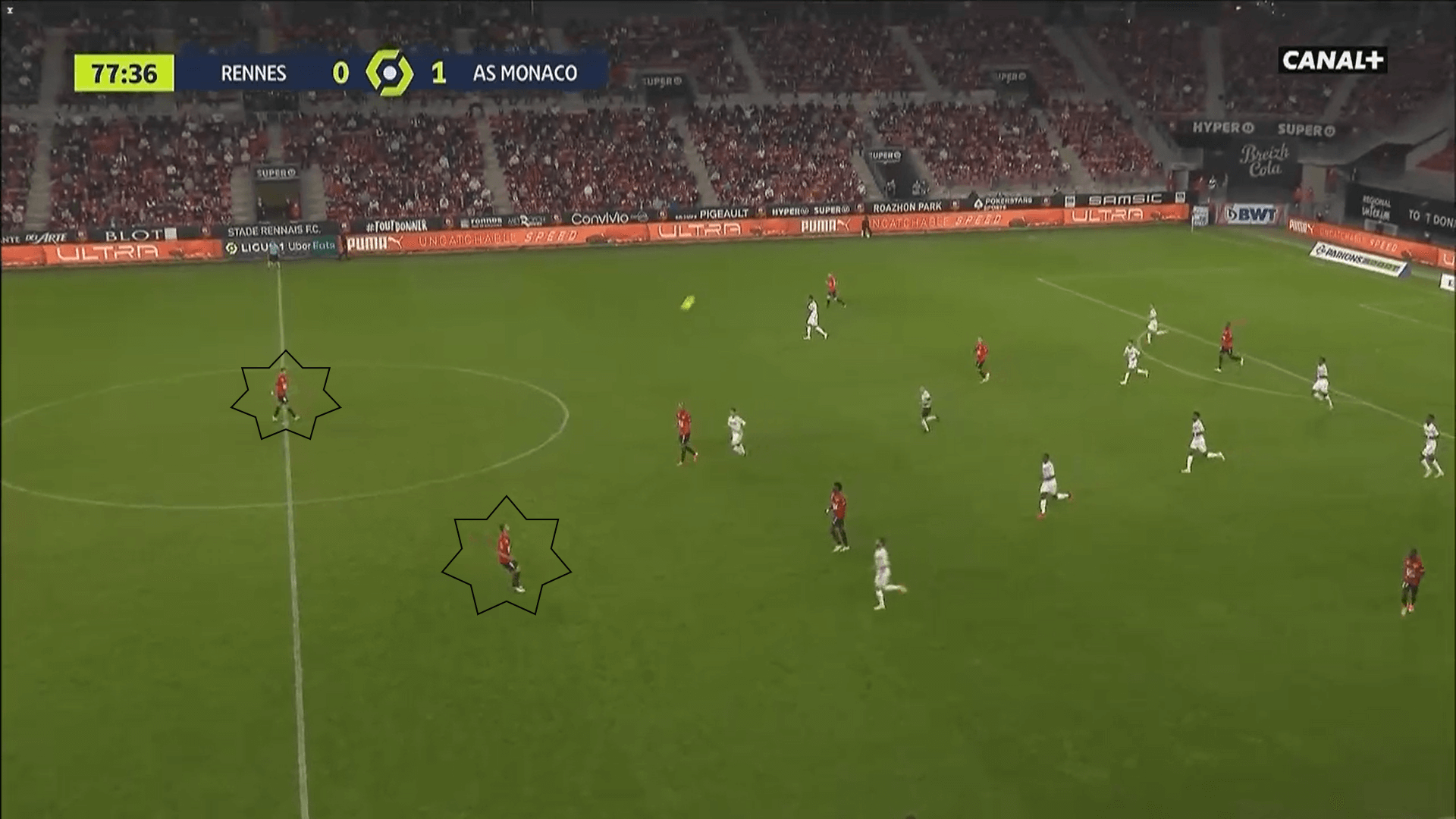 Along with having a higher block, the full-backs advanced a lot higher. This was done to stretch out the opponents to find more space through the middle and to also allow the wingers to come inside. Moreover, this added more people to the attack which was needed to put more pressure on Monaco.

In the image below, we can see how much space the left-back has out on the wing as the winger has come inside and is asking for the ball through the middle. If the Rennes midfielder manages to find the advanced full-back, they would have time to control and put a good ball in the middle. 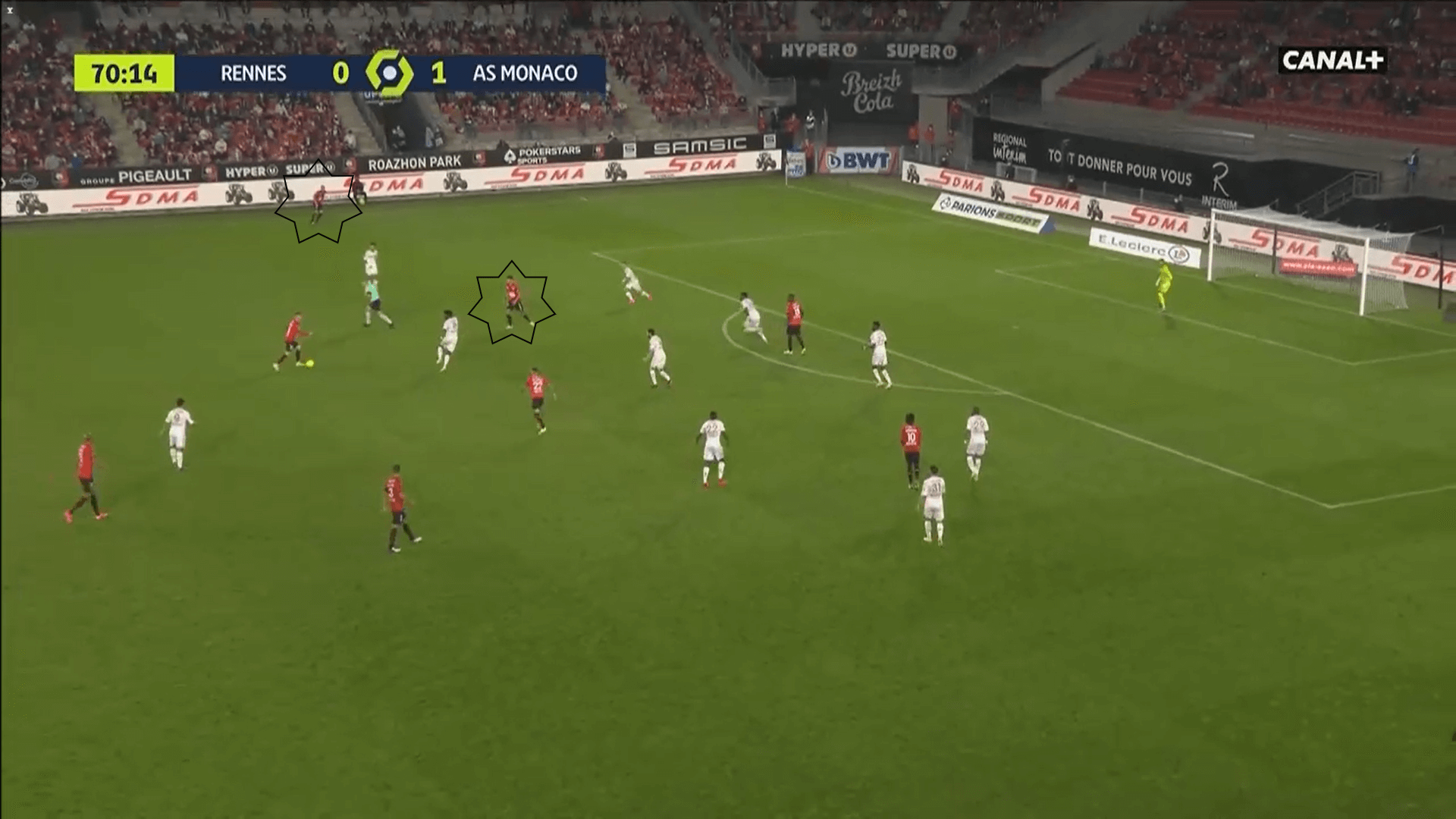 Connected to this was another way Rennes managed to surprise Monaco. In these moments of the game, Nzonzi would go from being the defensive midfielder to joining the attack and getting in the box for crosses. This surprised the Monaco defence as Nzonzi created superiorities by joining the attack.

In fact, two of these methods were used to score the first goal. The advanced left-back crossed the ball in the box and Nzonzi came storming in. The Monaco defenders were not expecting him and we can see that he is unmarked and in a very good position. 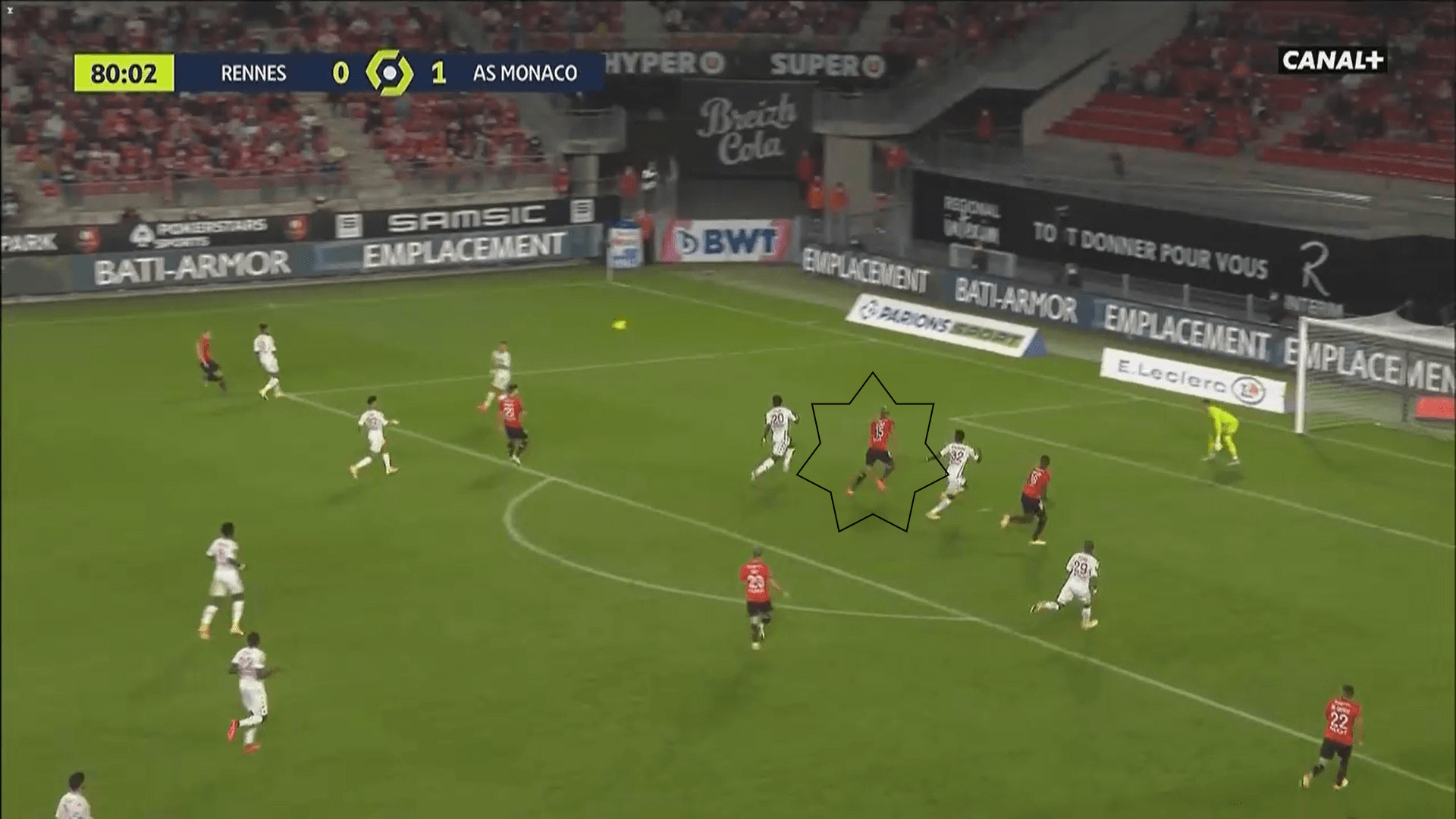 Overall, it was an entertaining match to watch as there were chances on both sides and the score was decided in the final minutes. Monaco needs to learn how to hang on to a lead better as if they had defended better for the last 10 minutes, they could have won the game. However, Rennes proved that they can perform even under the pressure of them losing and have the techniques to score against a low block. This will serve them well going into the Champions League.