Nice were coming in to this game on a bad run as they had lost two and drawn one of their previous three games. With this win, they settle themselves in eighth position in Ligue 1. Patrick Vieira’s players have to improve as they have the Europa League games coming soon, and if they want to compete in Europe, they have to do better. This is especially true if this year they want to compete to participate in the UEFA Champions League.

On the other hand, Nantes had the same results from the previous three games as they also lost two and drawn one. However, Nantes had lower expectations set on themselves due to Nice having a more talented team. They are now in 16th place and if they do not want to face a relegation battle, they need to step it up now.

This game, that ended in a 2-1 win for Nice, was heavily conditioned by the red card Nantes suffered in the fourth minute. This meant that they played basically the whole game with 10 men. Therefore, they got tired quicker and had less options to attack and defend well.

In this tactical analysis, we will observe the tactics used by both teams and how these changed over the game. In this analysis, we will see how Nice attacked against a team of 10 men and how Nantes did the best with what they had throughout the game. 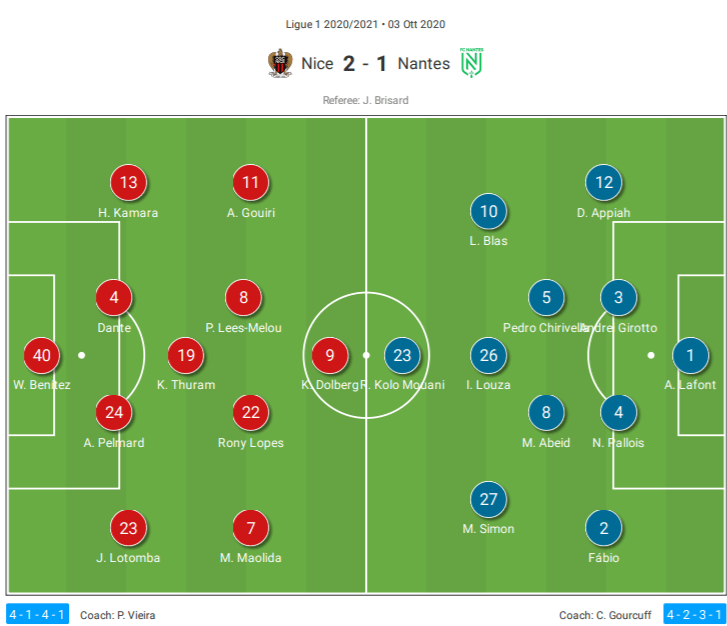 Nice started the game in a 4-1-4-1, with Khéphren Thuram as a defensive midfielder and Rony Lopes and Pierre Lees-Melou ahead of him. On the wings were Myziane Maolida and Amine Gouiri, with Hassane Kamara and Jordan Lotomba behind them as full-backs. The attack was led by Kasper Dolberg and the team was defended by Dante and Andy Pelmard.

Nantes played in a 4-2-3-1 which would change to a 4-4-1 after the red card. The back four was composed of Dennis Appiah, Andrei Girotto who got the red card, Nicolas Pallois, and Fábio. The midfield included Pedro Chirivella, Mehdi Abeid as defensive midfielders and Imran Louza as attacking midfielder. On the wings were Moses Simon and Ludovic Blas, with Kolo Mouani as striker.

Since Nice had more players, they dominated possession and thus, had many more chances to build-up from the back. With the red card, they placed their team very high up so that the centre-backs could build-up in the opponent’s half. Also, bringing the whole team up makes it easier to press Nantes which will be explained later.

Nice started in a 4-1-4-1 with Thuram coming to help in the build-up, as he was the defensive midfielder. This was done to connect the defensive line and the midfield line as well as adding an extra person in the build-up. This is important as Nice want to create superiority in this area to play the ball out easier. 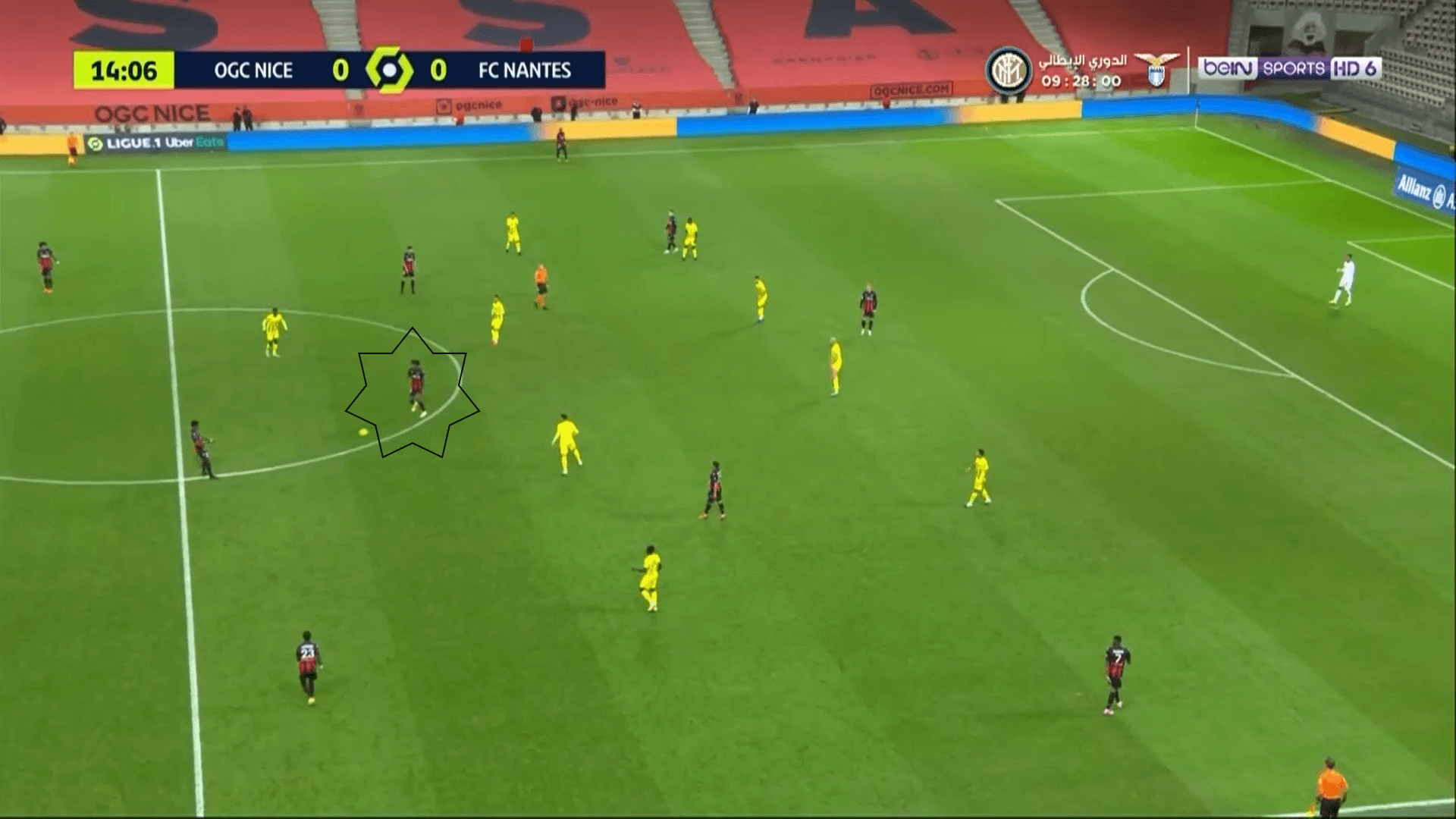 However, some minutes after the red card, Patrick Vieira thought that there was no need for a defensive midfielder to help. It was because the centre-backs were not being pressed due to Nantes having less players.

Therefore, he changed the formation and moved Thuram to a centre-midfielder role. He then put Rony Lopes on the wing which is his natural position, Amine Gouiri as attacking-midfielder, and Myziane Maolida on the left. Essentially, it became a 4-2-3-1 which can be seen in the image below. 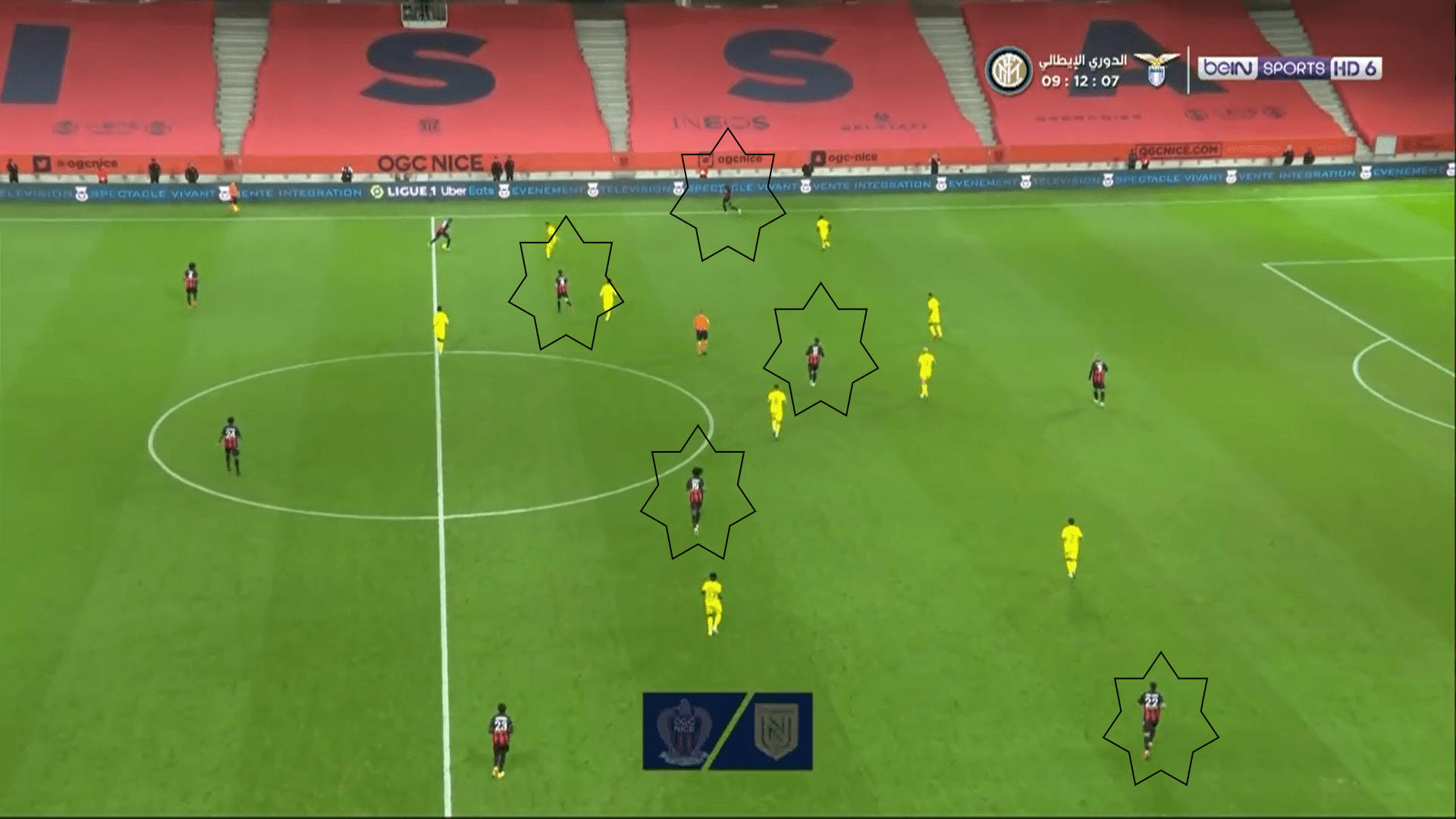 This new system allowed them to be more effective in attacking a low-block. It was made to give more attacking options as instead of a defensive midfielder, they now had an attacking midfielder who had the freedom to move around and create superiorities around the pitch.

This new formation also gave Nice more passing options through the middle, which is the most dangerous area to attack from. Especially against a low block, passes through the middle are key as the player can then turn around and create danger.

This strategy suited Nice as they have Dante, the ex Bayern Munich player, who delivers great strong passes.

For example, in the image below Dante manages to pass the ball through the opponent midfield line into the left-winger. With this pass, he just cut out four players from the action and now the left-winger could just turn around and face the goal. He would normally be accompanied by the left-back and so they could generate a 2vs1 situation. 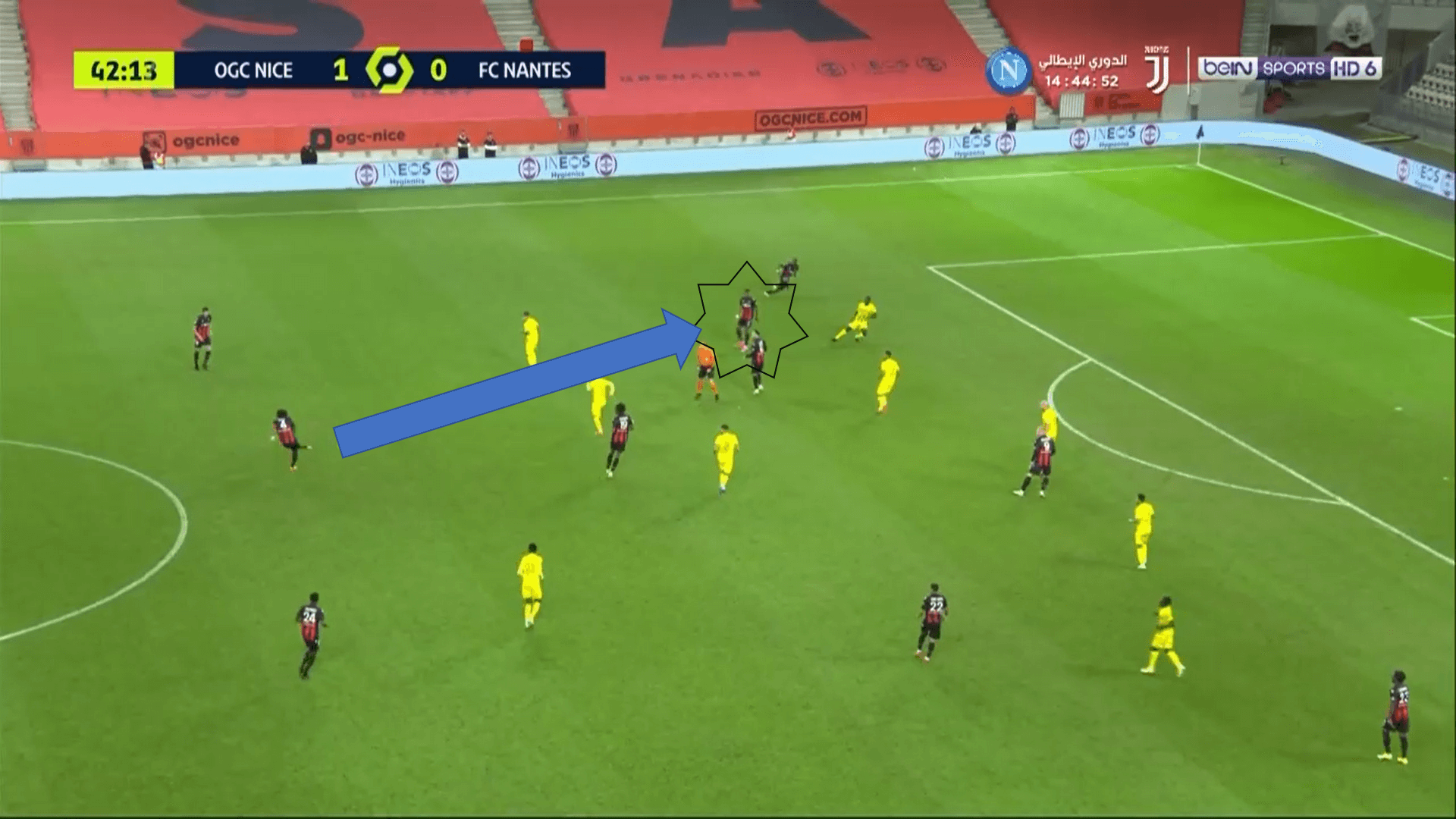 These passes through the middle could be for any of the attacking players. However, the passes usually went to the wingers, who would come inside and ask for the ball. They did this in order to create space on the wing for the full-back.

With this movement, Nice incorporated another man into the attack and so gave the option to generate surprise and to create overloads on the wing. Moreover, the opponent winger has to be aware of this and follow the full-back, but if he is not aware, it leaves the full-back alone in space which happened several times.

Another reason why Nice had attacking full-backs was to generate width for the team. With this width, they spread Nantes further, which meant more spaces through the middle. This means that now Nice had two options, to either make a strong pass through the middle, or to the full-backs that were wide and had space.

In the example below, we see how high the full-backs have gone. They have gone so high that they are almost in line with the opponent’s defensive block. 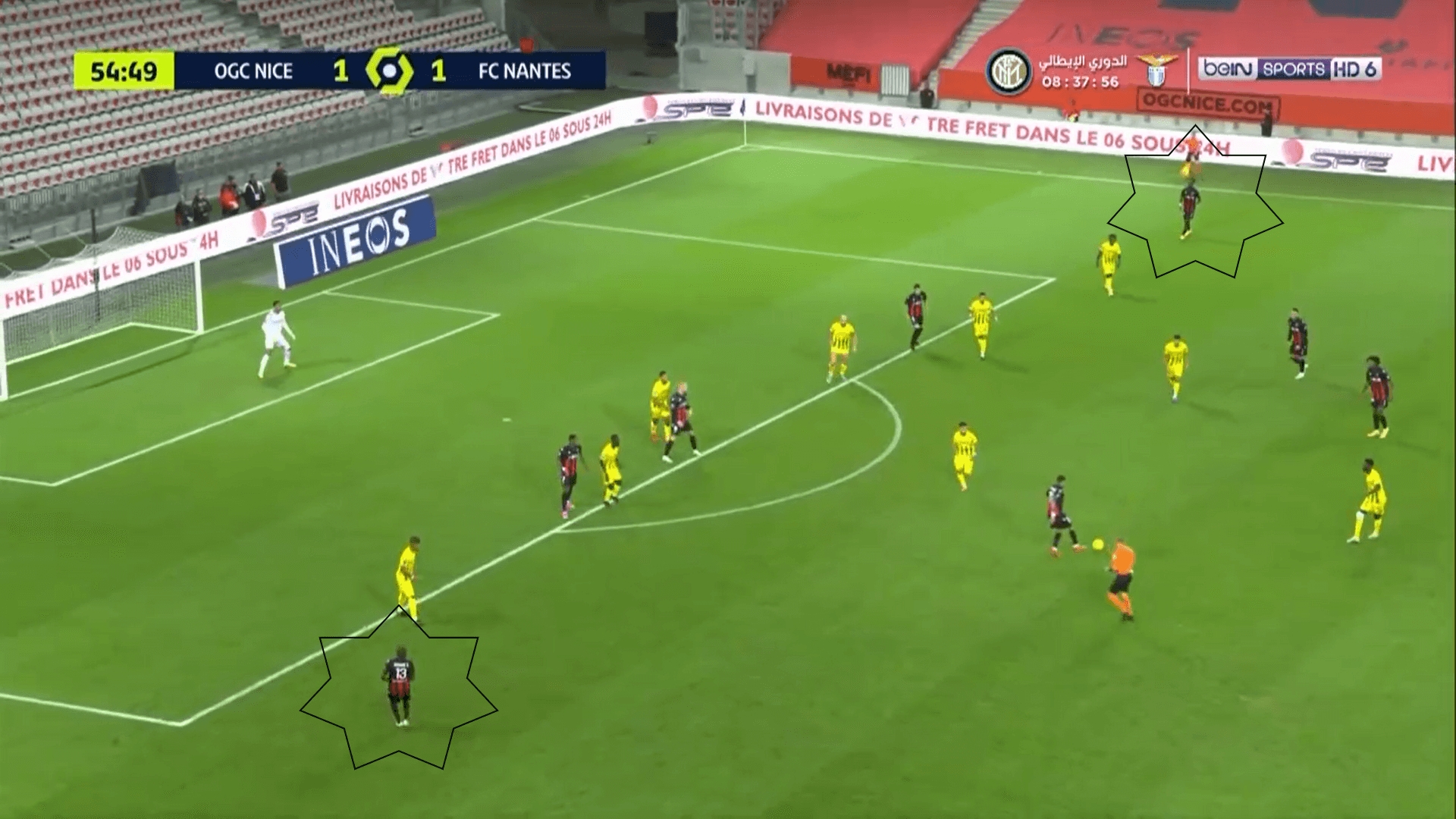 Additionally, another way Nice tried to surprise Nantes was by switching the ball to the other side. This was especially prevalent with Dante passing it to the right side as he has a better pass. Switching the ball had the aim to make Nantes think that Nice were unpredictable, as they can either build-up correctly or directly go for the long ball.

This unpredictability made Nantes doubt as to whether advance their lines, because they feared the long ball to the other side or behind their defence. Also, switching the ball allowed the wide player to receive the ball in plenty of space. It means he would have the time to control and look for an attacking option.

Below is the instance when Rony Lopes was on the wing and decided to surprise the Nantes defence by running in behind. Dante saw this and switched the ball as well as made a pass in behind. We can see that this was a moment when Nantes had advanced their team a bit.

After this moment, they would be more hesitant to do so. 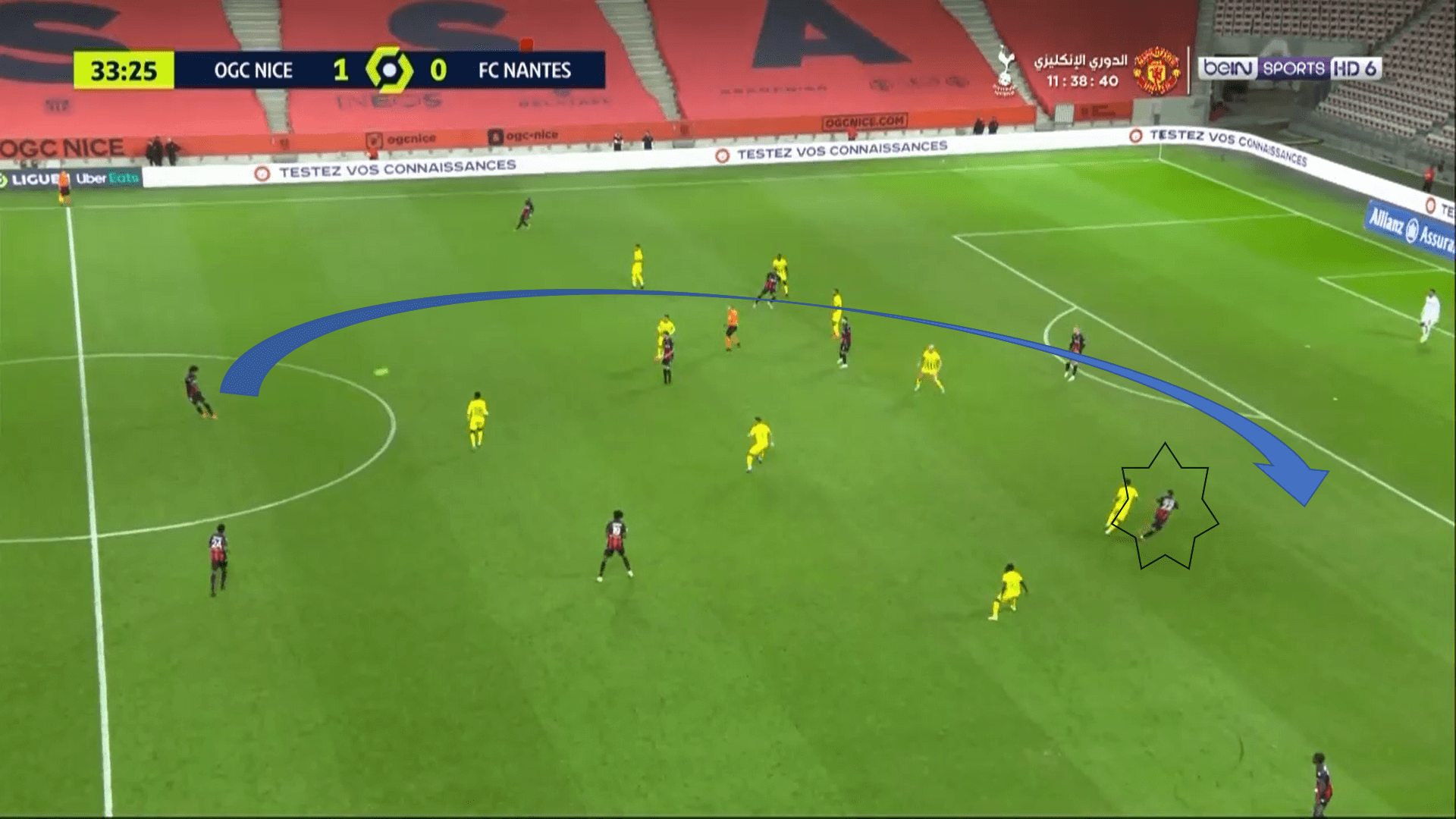 Against a low-block and with the technical players that Nice has, they could also link up quickly through the middle. The middle is the most congested area in the field as the opponents prefer that you attack from the wing than from the middle.

However, if you are able to create space here, it can be very dangerous. Nice tried to do so with quick one-twos that would open these spaces and dismantle the Nantes team. For example, in the image below, the midfielder does a one-two with Rony Lopes who has come inside.

This one-two attracts both Nantes midfielders and the return pass from Rony Lopes leaves the Nice midfielder with space in the middle where the attacking danger intensifies. 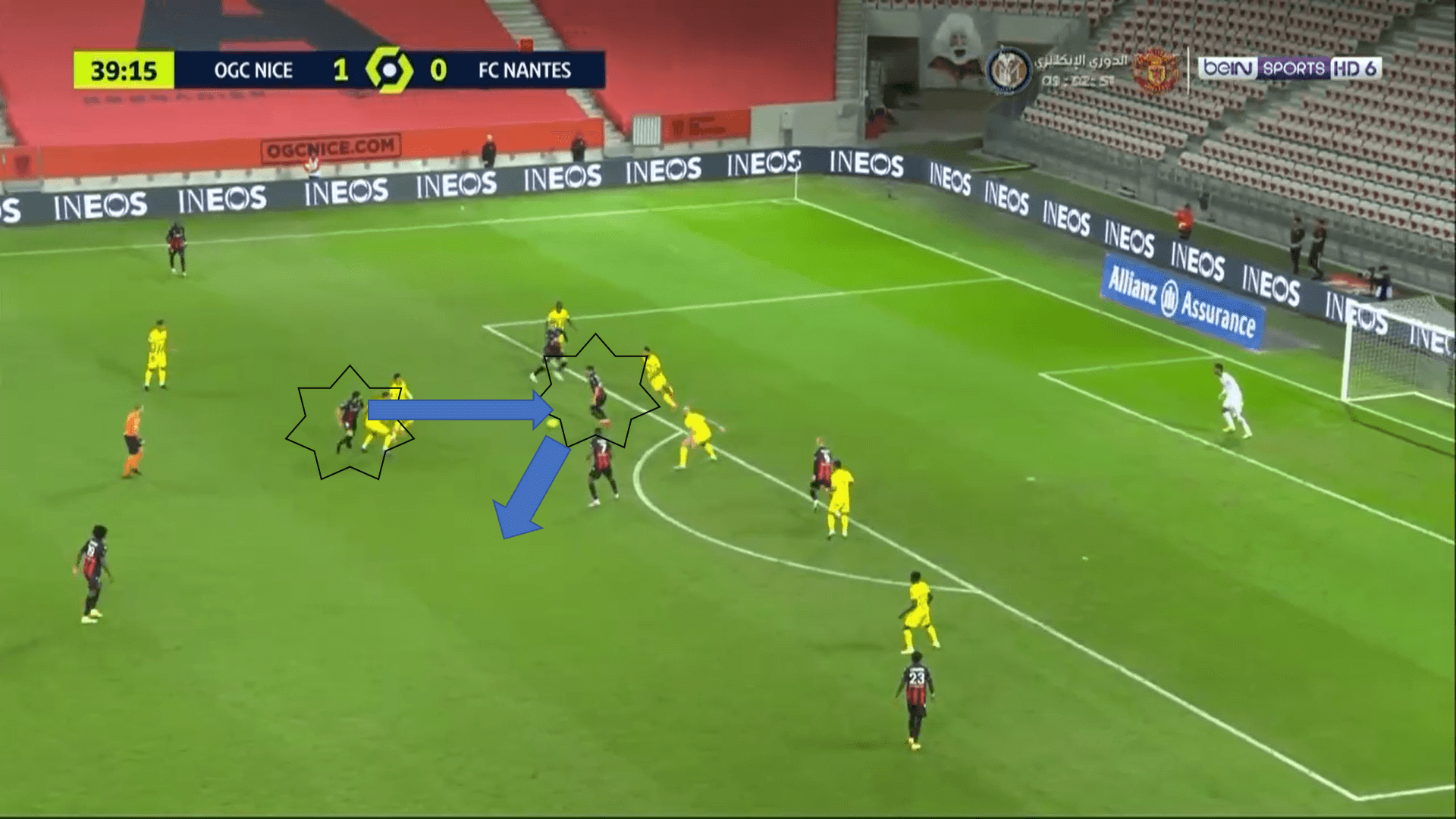 Pressure from both teams

With Nantes having 10 men, their attacking options were more complicated. They tried to play out from the back at first, but Nice started pressing high as they did not want to give them any chance. The main problem they had when building up is that they never had a superiority when doing so.

Their two midfielders dropped down to help, but it was not enough as Nice also brought theirs up to balance the numbers. In the image below we can observe how high and intensely Nice were pressing Nantes.

In this instance, there were six Nice players against four Nantes players. This made it really hard for them to play out from the back and after a while resorted to kicking it long.

Also, Nice pressed high because they knew that if Nantes kicked it up, Nantes only had one striker to contest the ball against Nice’s powerful defence. 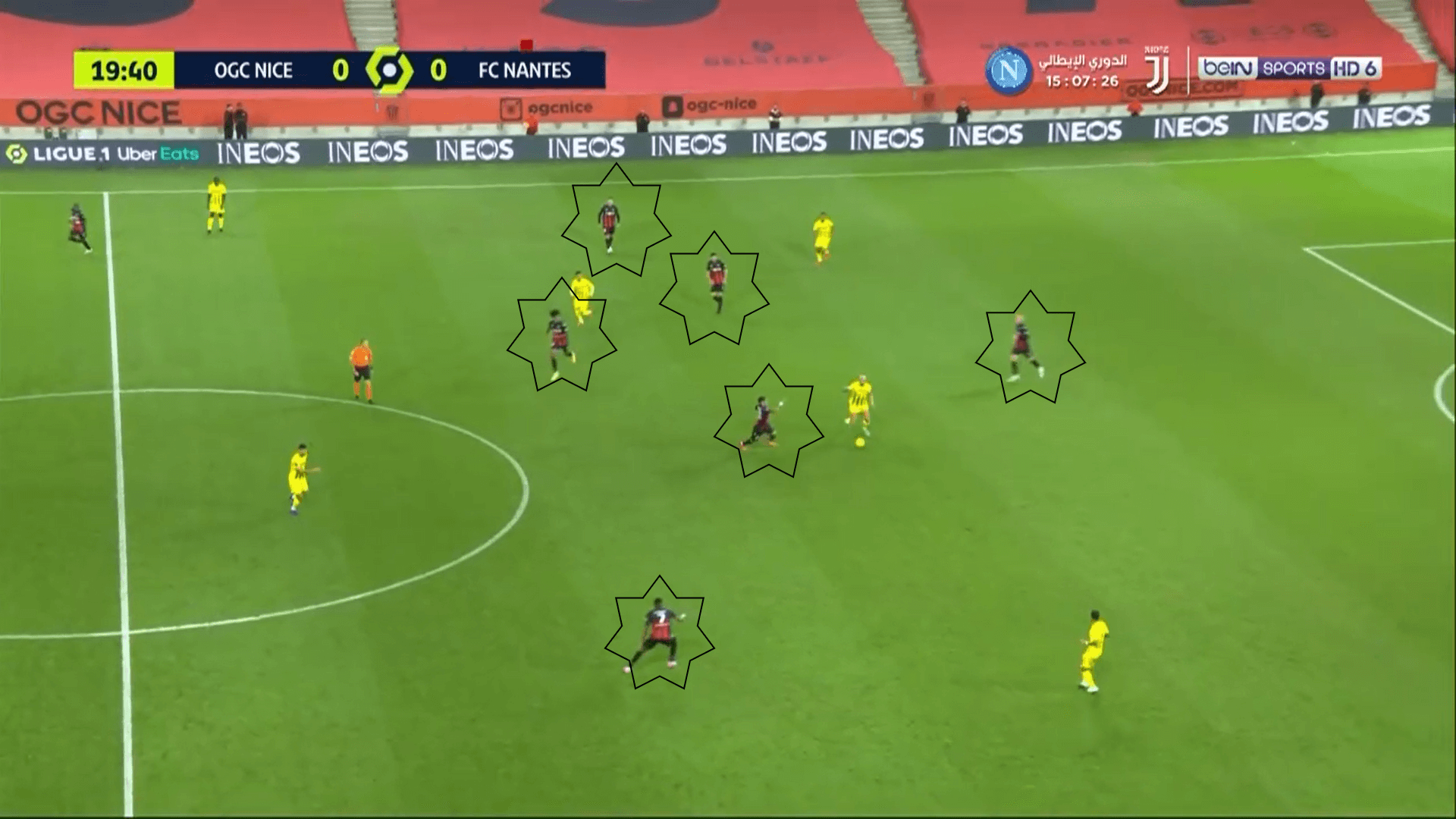 After the first Nice goal, Nantes decided to be brave and risk more. Thus, they decided to press high up. They did this in order to try to regain the ball in the opponent’s half to make quick attacks. When you recover the ball close to the opponent’s goal, you need fewer touches and passes to finish the play and this was good for Nantes.

The less complexity that the play needed, the better as Nantes were fewer men and for them making an elaborated play was a lot harder. In the example below, we analyse just how high Nantes are pressuring in order to recover the ball. 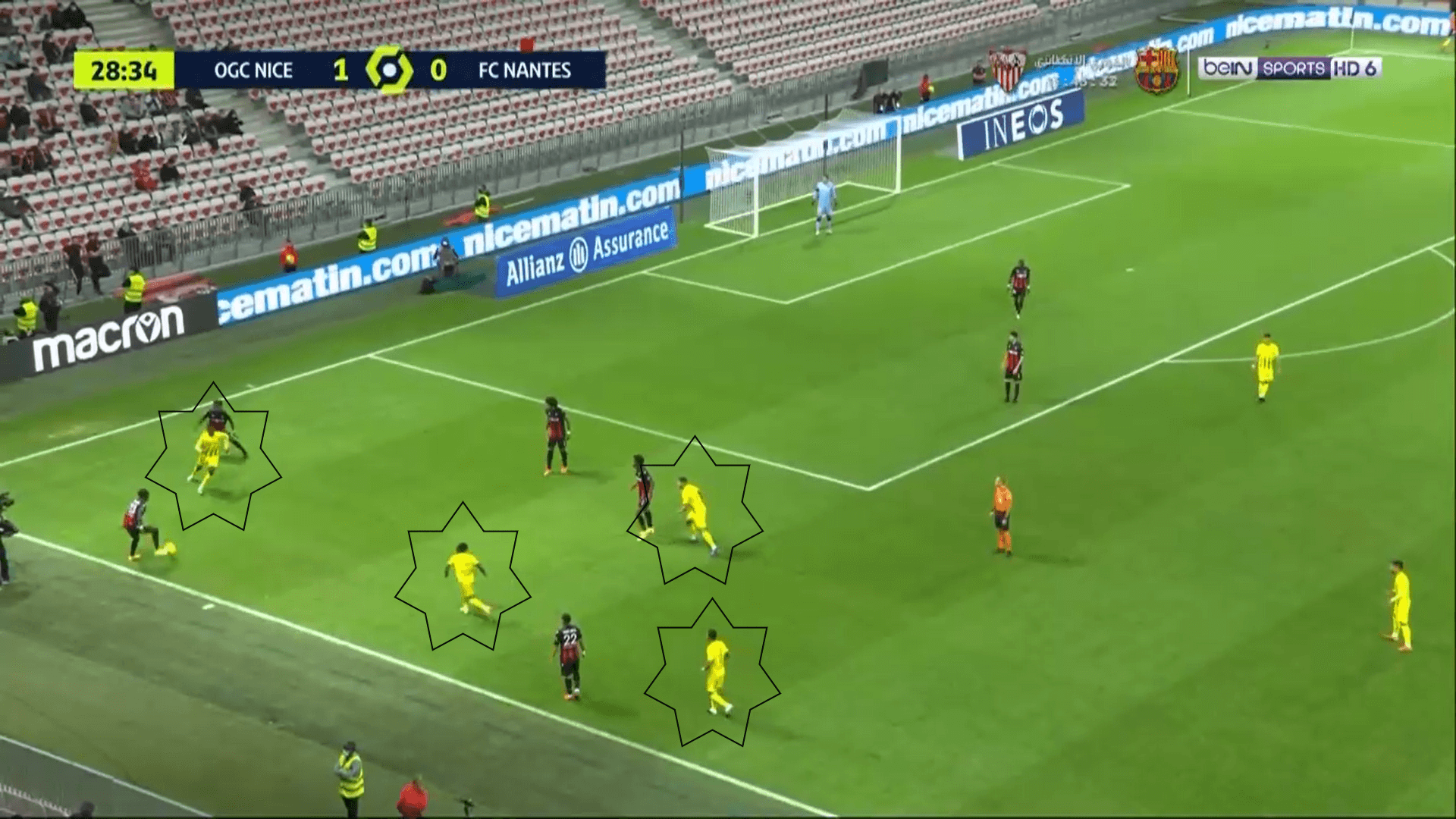 When Nantes were losing in the second half, they started attacking more. They did this by taking advantage of Nice’s attacking full-backs. Thus, they told their striker to move into the area that Nice’s right-back left to receive the ball there when Nantes recovered the ball.

This was effective as it resulted in a couple of attacks for Nantes. In the image below, we see how the striker is moving to this area with space and it is Nice’s centre-back that is going out of position to cover him. Meanwhile, Nice’s right-back is coming back from the attack. 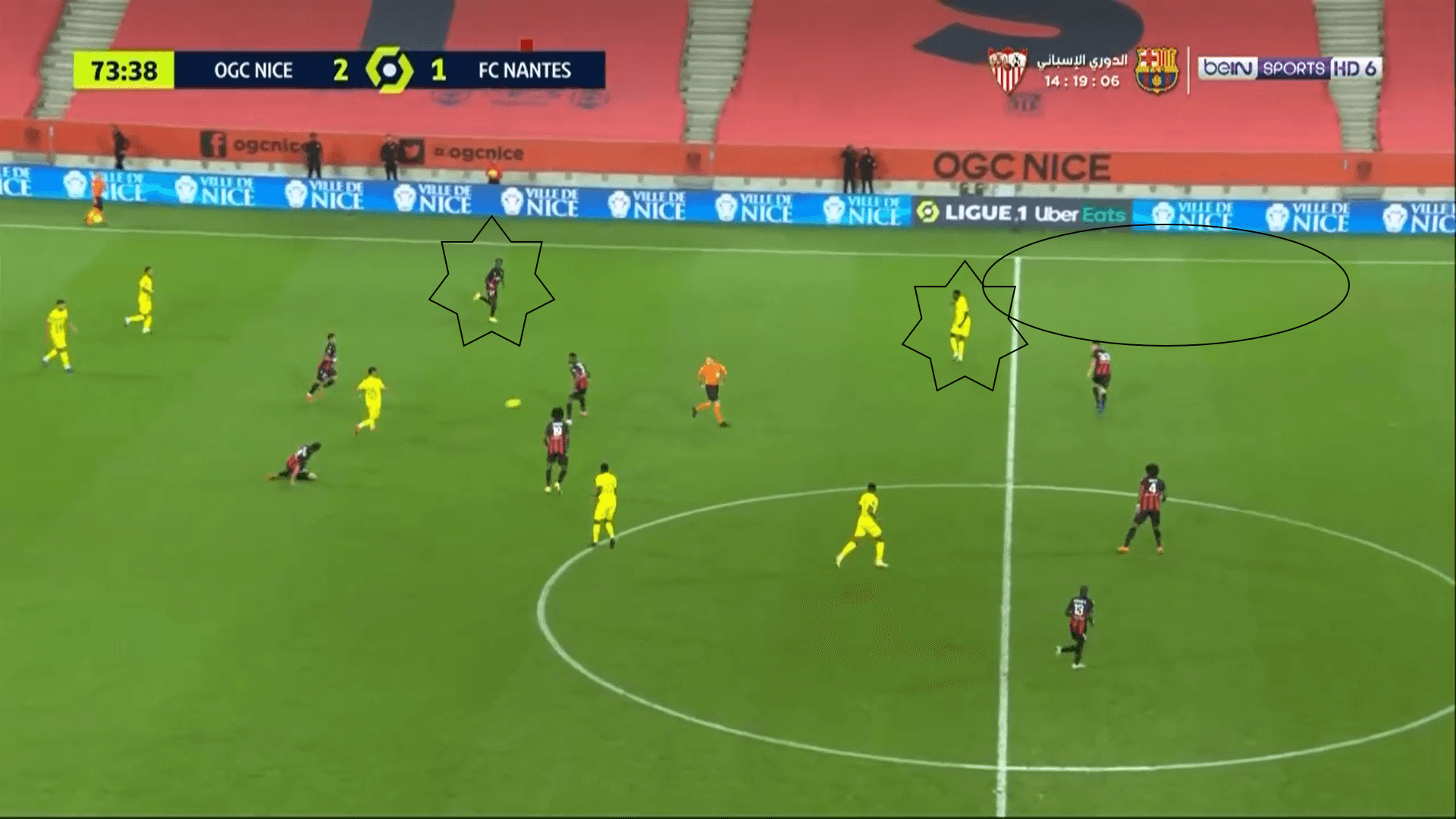 Additionally, in the last minutes when Nantes had to risk it all to try and score, they did the same tactic as Nice. They made their winger come inside for the full-back to have space while attacking. It was interesting to see how they created danger when the whole team went up against a superior team with all their players. 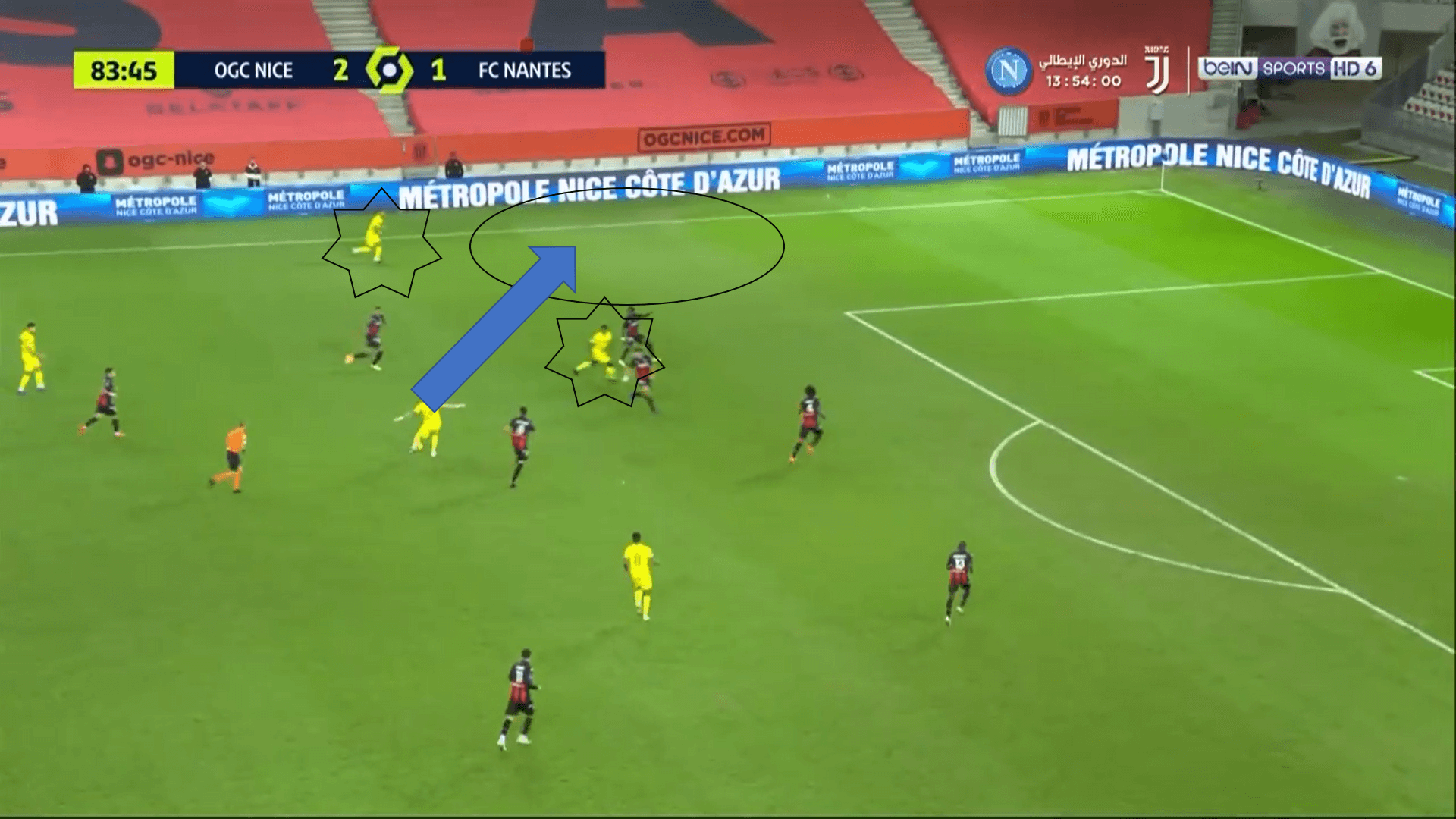 Overall, this was a game heavily conditioned by the early red card. Both teams had to adapt to this situation, with Nice advancing their whole team up and having attacking full-backs among other things. Also, Nantes’ attacking options were harder and were annoyed further by Nice’s high pressing. They managed to compose themselves and found ways to create danger for themselves. All in all, Nantes fought well to overcome the red card but in the end, they could not manage to draw against Nice, who should have won more comfortably considering their expectations.