After a frustrating draw away to Huesca on Wednesday, Diego Simeone’s Atlético Madrid welcomed Villarreal for their third fixture of the 2020/21 La Liga season. On the other side, Villarreal pulled-off a 3-1 home win against Deportivo Alavés following a frustrating for a 4-0 humiliation at Barcelona.

With Unai Emery looking to continue the rhythm and Diego Simeone looking to ease things off for the Rojiblancos, both the sides looked to grab a victory. However, things got frustrating for Atlético yet again, as they were held by the Yellow Submarine for yet another goalless draw. This tactical analysis will look at why Atlético Madrid struggled to create chances, how Villarreal’s tactics worked against them and how both the teams lined up for the fixture. Similarly, the analysis will also look at how both the teams used their build-up and some significant tactical traits that the managers tried to execute.

Atlético Madrid made three changes coming into this clash. Stefan Savić replaced Mario Hermoso to team up with Felipe at the back. The Rojiblancos switched to a 4-3-3 instead of their regular 4-4-2, with two offensive changes in Ángel Correa and Koke. João Félix and Luis Suárez again led the attack for Simeone’s side. 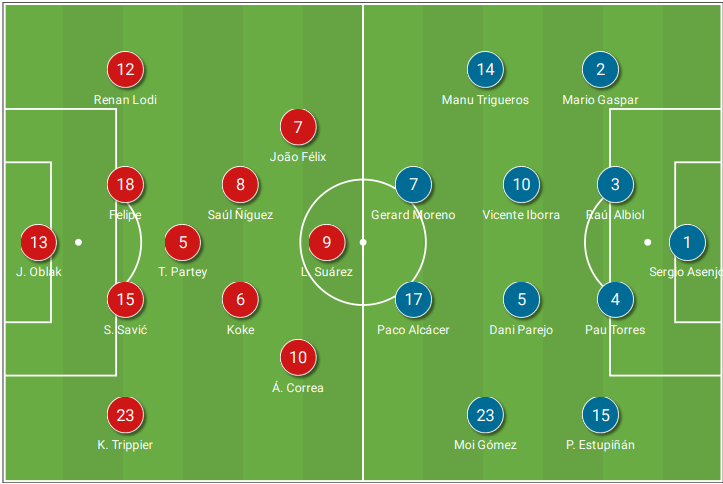 Unai Emery did not make a single change to his line-up from the mid-week. Paco Alcácer and Gerard Moreno teamed up to form the front two, whereas Vicente Iborra and Dani Parejo again formed the heart of the four-man midfield. As usual, Pau Torres and Raúl Albiol started in defence, ahead of Villareal’s shot-stopper Sergio Asenjo.

Villarreal typically used a wider approach on the build-up. While the full-backs stayed wide and in a relatively advanced part of their own half, the centre-backs also played in a relatively wide orientation. Asenjo, the keeper, was frequently invited to play the ball out from the back, and the freedom was provided by centre-backs’ positioning. Their wide positioning spread the opposition press wide, which meant there was no significant opposition pressure on the keeper. 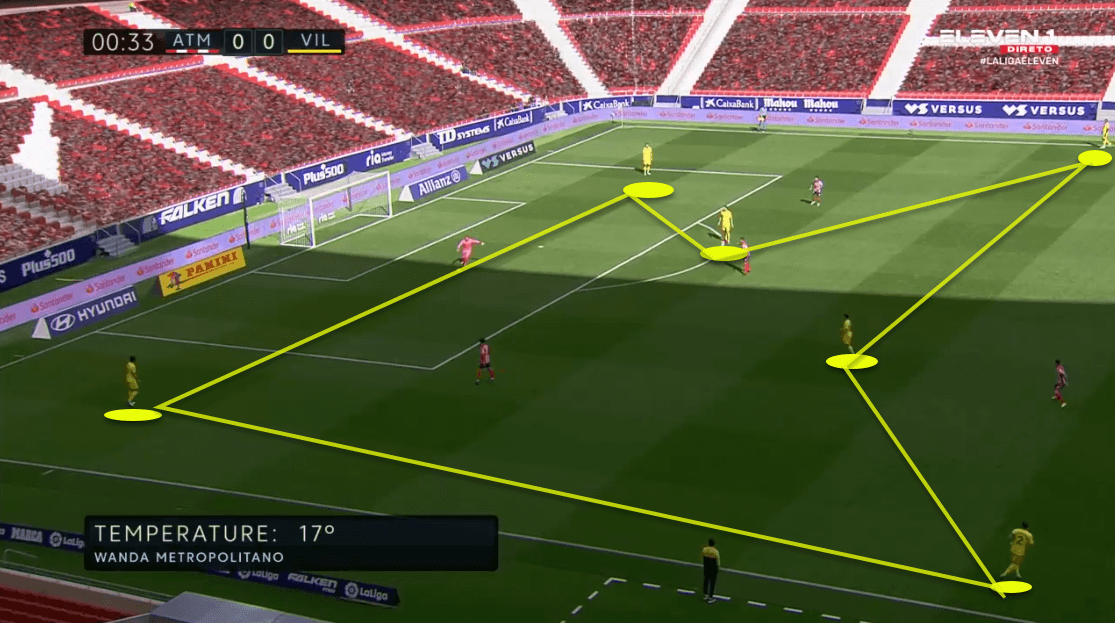 Atlético Madrid chose to press higher on occasions, cutting the passing lanes. This caused Villarreal to opt for long balls over the top, to break multiple lines. Generally, this was done by Asenjo during the initial phase of build-up, as wide players were usually free due to Atlético players opting to mark zonally. 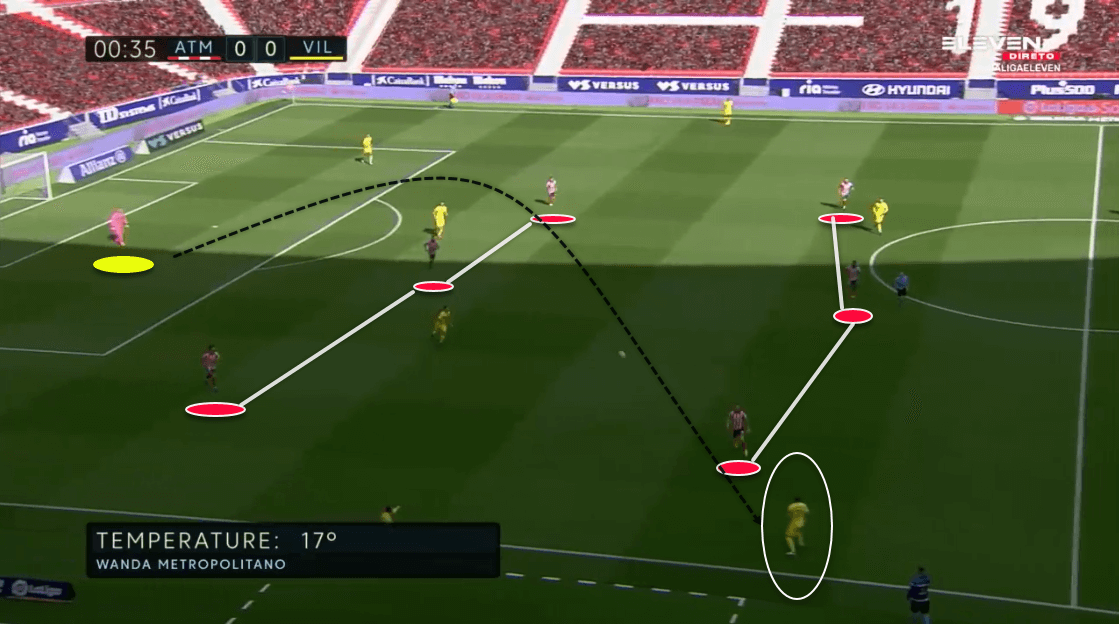 As a result, long balls directed towards the wide players (mainly full-backs) was a major characteristic that was seen in Villarreal’s build-up. As we can clearly see, this broke the first two lines of Atlético’s press, hence giving the wide player to make a progressive run and find other players in space to pass.

This was a major portion of how Villarreal opted to play out in the build-up, and Asenjo’s map of long balls beyond his own third helps us understand the situation better.

We can clearly see – from long balls directed towards Moreno to diagonal balls towards either of full-backs, Asenjo was a crucial part in helping Villarreal get out of their own half.

Alternatively, when the Rojiblancos had players deployed in the wider positions, Villarreal preferred to use Iborra or Manu Trigueros to play out from the central spaces. In these occasions as well, the team made use of wide channels to advance, but through short balls. 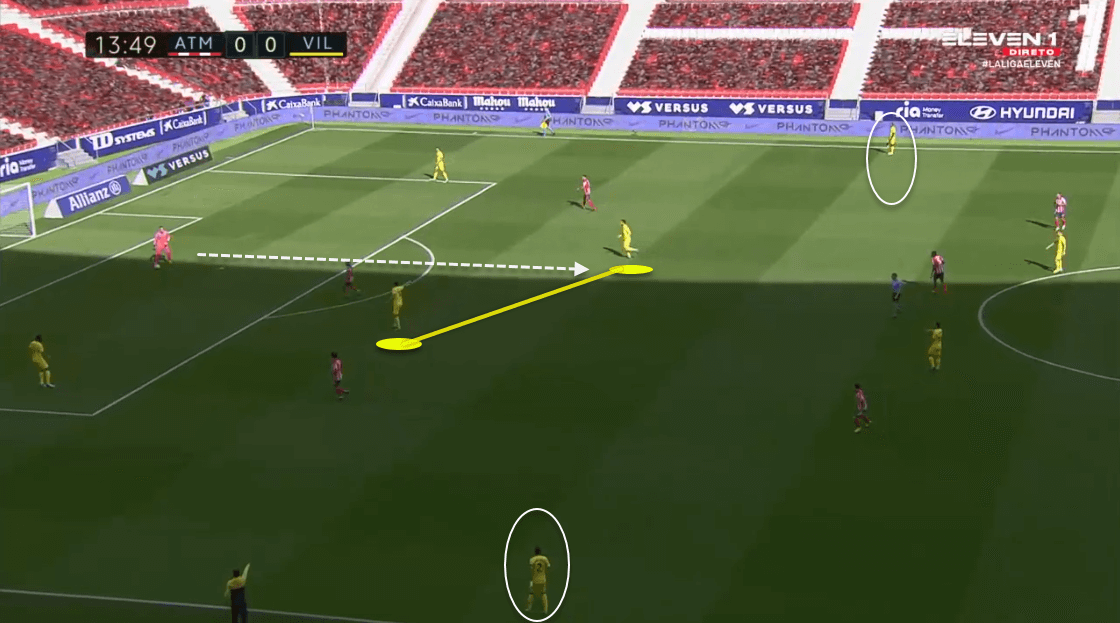 The above image shows an image just after a Villarreal recovery. The wide players instantaneously were not free, and hence the ball is played back towards Asenjo to look for an option. In this case, he uses the player who is dropping to receive his ball, and since he is unmarked by the opposition, these moves turned out to be safe for Villarreal one way or the another.

After getting the ball towards the end of their half, Villarreal’s approach was to capitalise on spaces left uncovered by Atlético Madrid’s tactics of maintaining a compact shape off the ball. Hence, after playing out from the back, with a long ball or a short ball to the wide player, Villarreal immediately looked to play those balls into spaces. 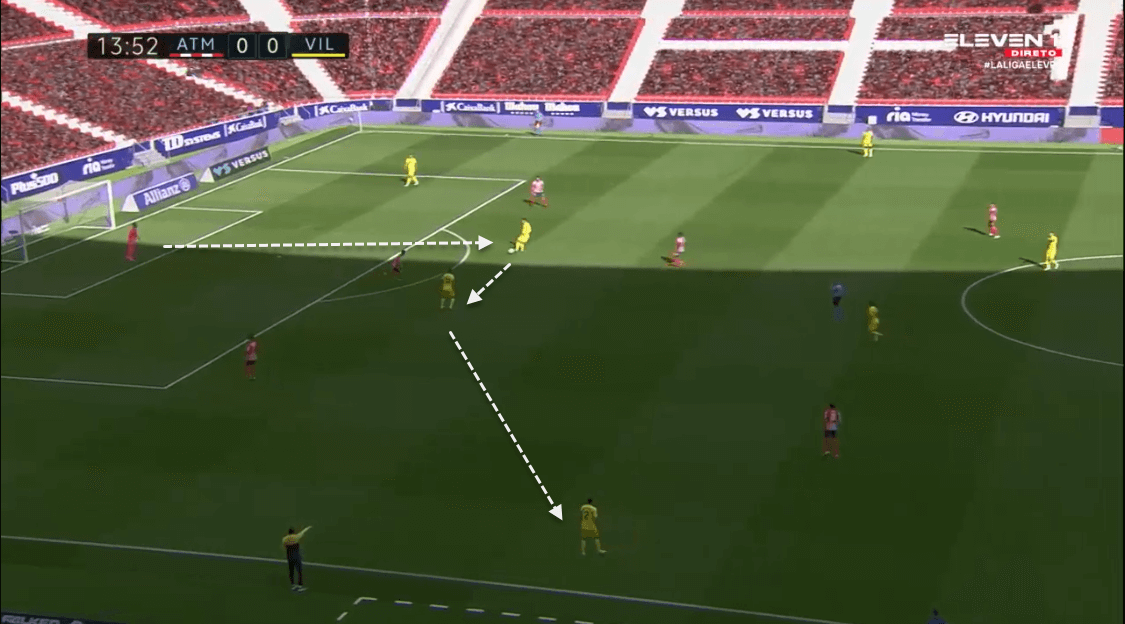 We can see an example of how a brief build-up is directed towards Mario Gaspar, who is in space and can provide a ball towards central players. 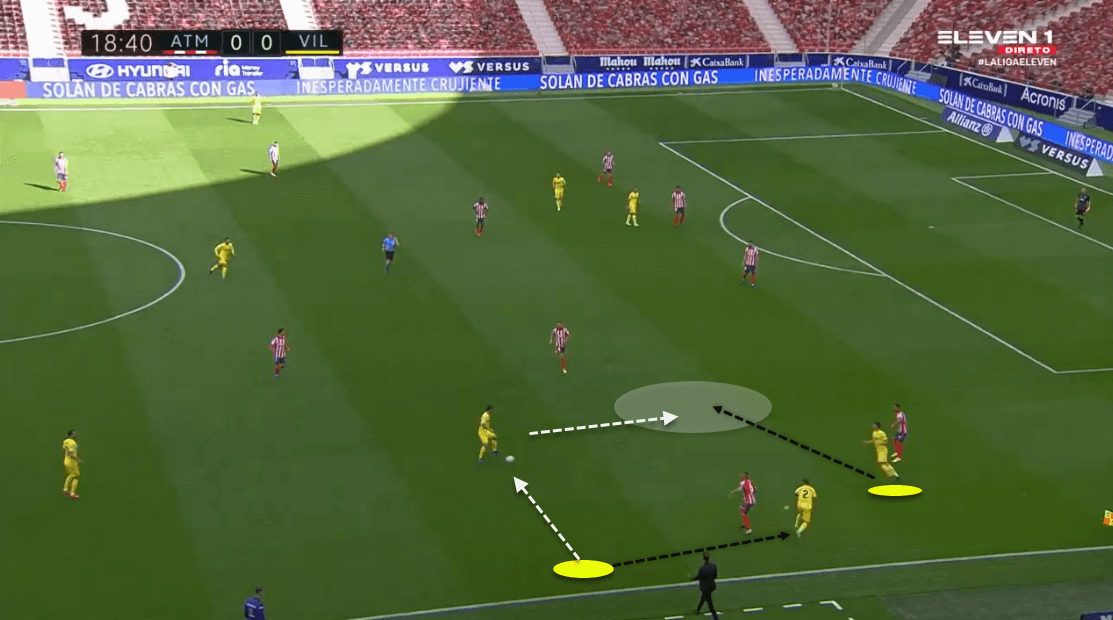 In several occasions, full-backs were allowed to make wide progressive runs, and serve as providers to midfielders. As we can see in the image, Villarreal clearly have a 3v2 overload, and before the nearest Atlético player arrives to make it an even situation, the ball is played to the player moving inwards. In this way, another space towards the centre is created, and the receiving player can find other free players. 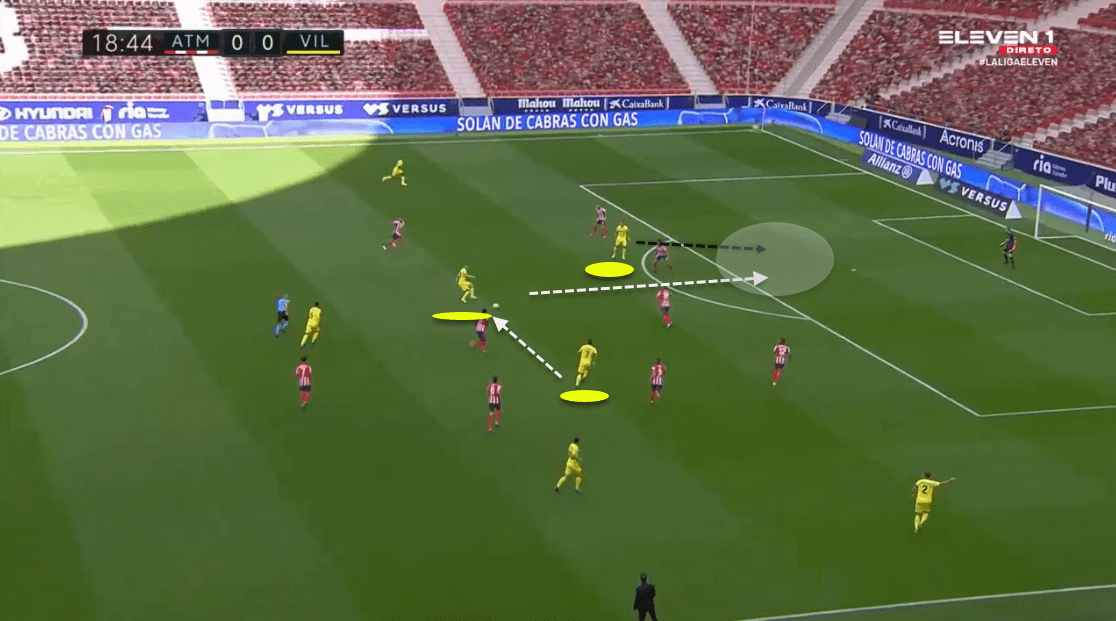 After receiving the ball, the player does what Villarreal were seen doing throughout their attack – either using spaces to make brief runs, or to create a passing network in it. In this occasion, he exploits the space by running into it, then finding another player who is well-positioned to release the striker. As we can see, the striker is also ideally placed and can make a blindside run to receive the ball inside the opposition box.

Alternatively, even when Villarreal managed to advance the ball from wide-left, their inclination towards right was visible. Villarreal looked to play long balls towards left side whenever a hint of space was visible. 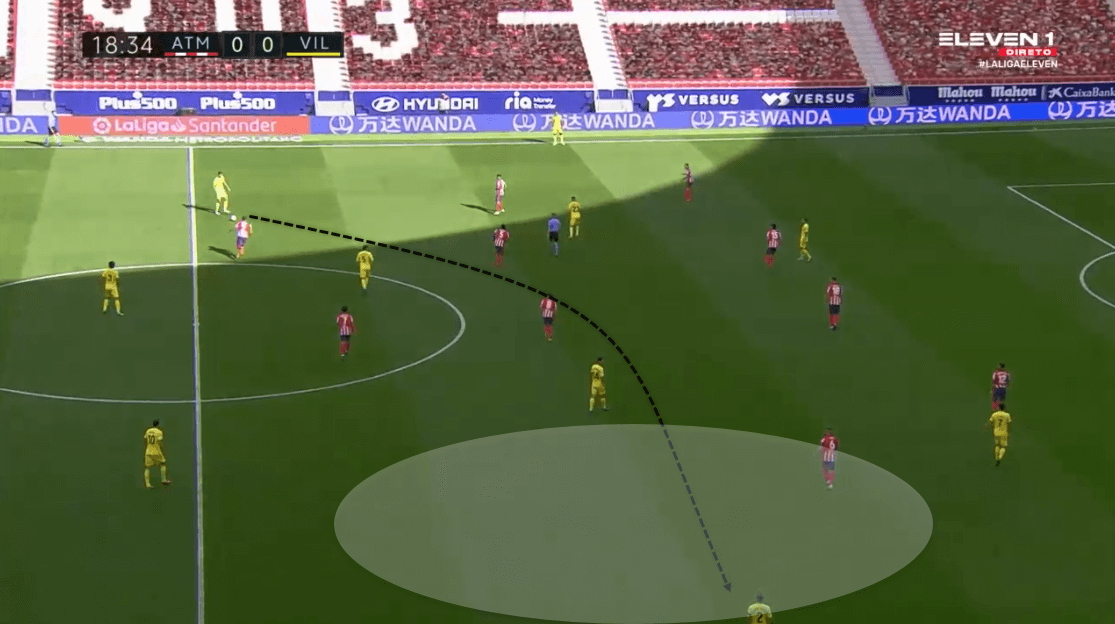 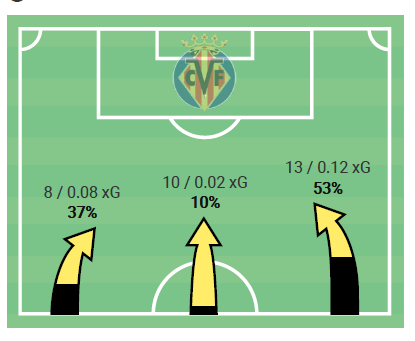 Atlético Madrid’s attacking moves revolved around their build-up tactics. Since Villarreal did not press high and allowed Atlético to maintain the space in defence line, Thomas Partey frequently dropped deep to help in the collection and distribution of the ball. This meant complete freedom for the full-backs, who were used as width providers on several occasions. 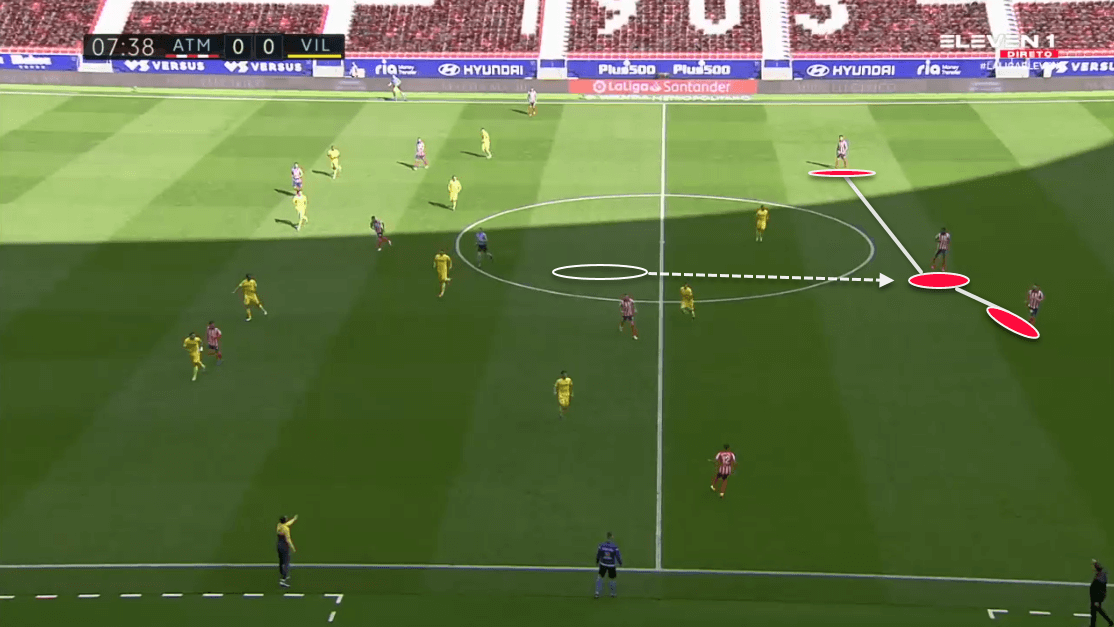 What this meant for Atlético was that they could deploy their wide attackers, Félix and Correa inwards, operating from the half-space. Suárez acted as a conventional poacher, while Félix was allowed to roam, drop deep and fetch the ball for the Uruguayan. 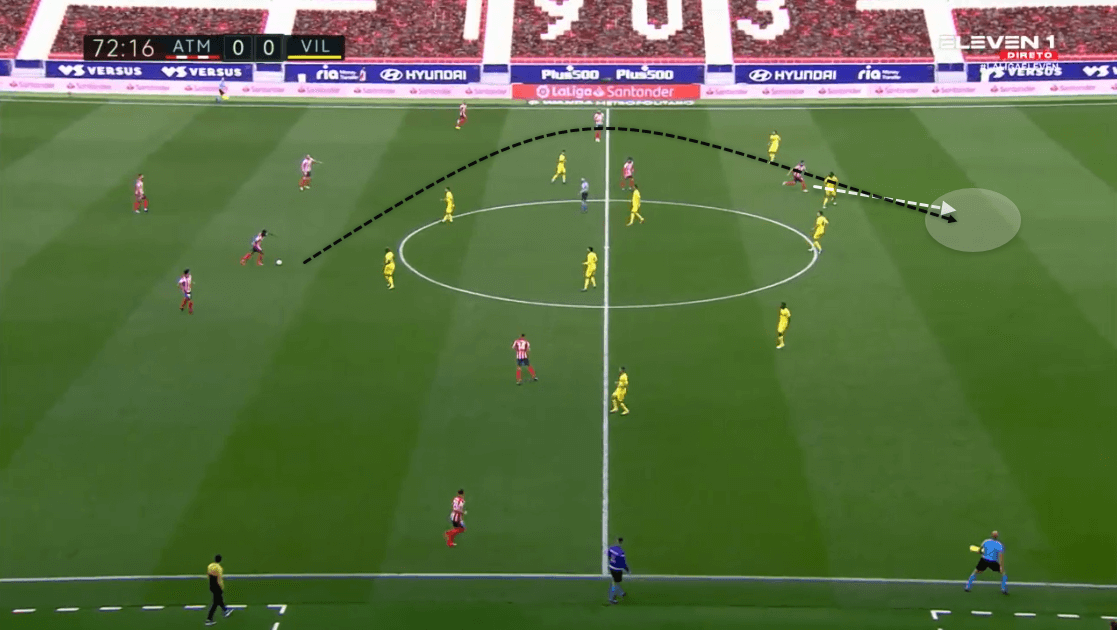 Occasionally, after Diego Costa was introduced, this trend shifted into a direct approach, and the Rojiblancos tried to make use of long balls and Costa’s runs behind the defensive line. 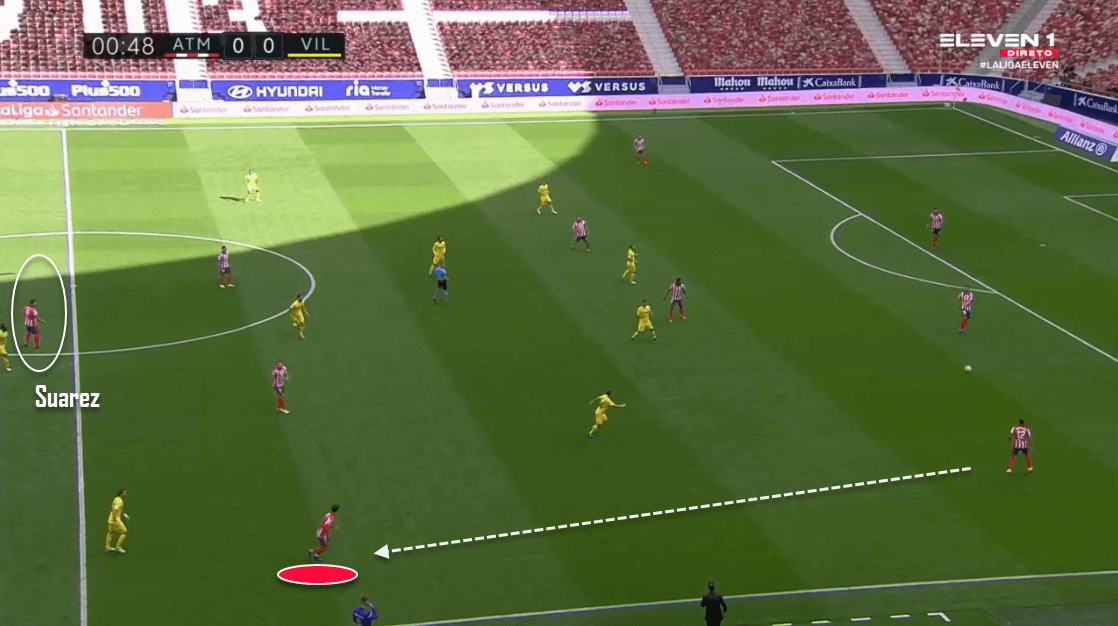 As a result of the freedom, Félix was seen dropping down and receiving the ball from wide areas frequently. This was happening both when Félix received a ball from the run-making full-back, or when he fetched the ball himself.

Similarly, what was noticeable due to Félix’s movement was how a midfielder contributed in occupying the space left by Félix upfront. When Félix would drop down, a midfielder (Koke) would make diagonal run to cover the space and frequently, receive the ball from Félix. 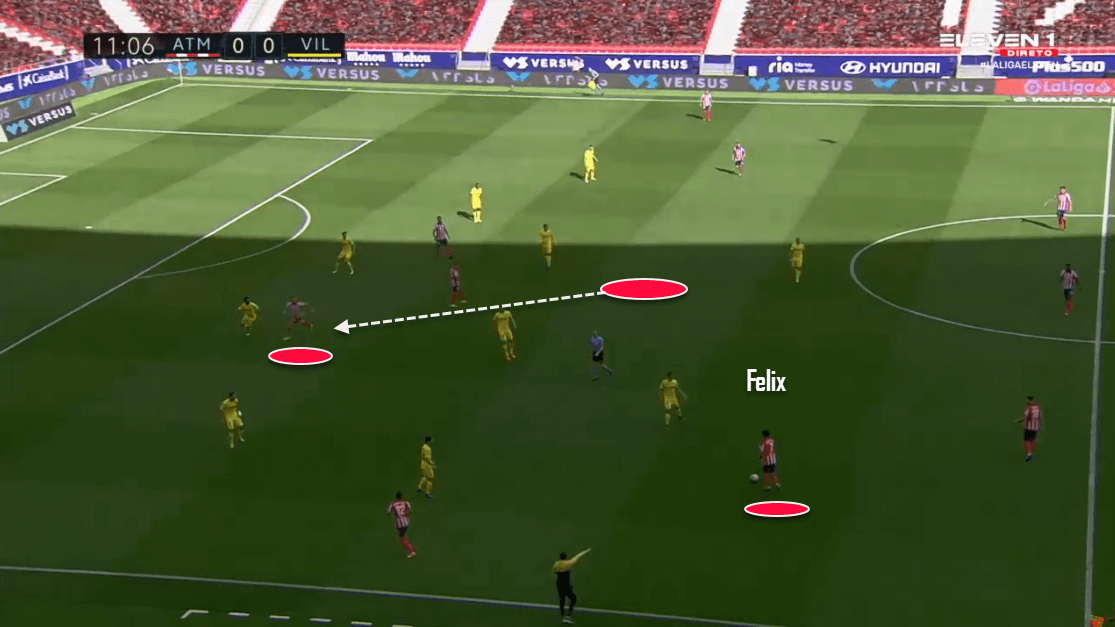 Like we can see in the above instance, a midfielder leaves his space to occupy Félix’s space. Another thing to notice here is how the full-back is allowed to go ahead towards the left side, allowing Félix to tug in or have a passing option. 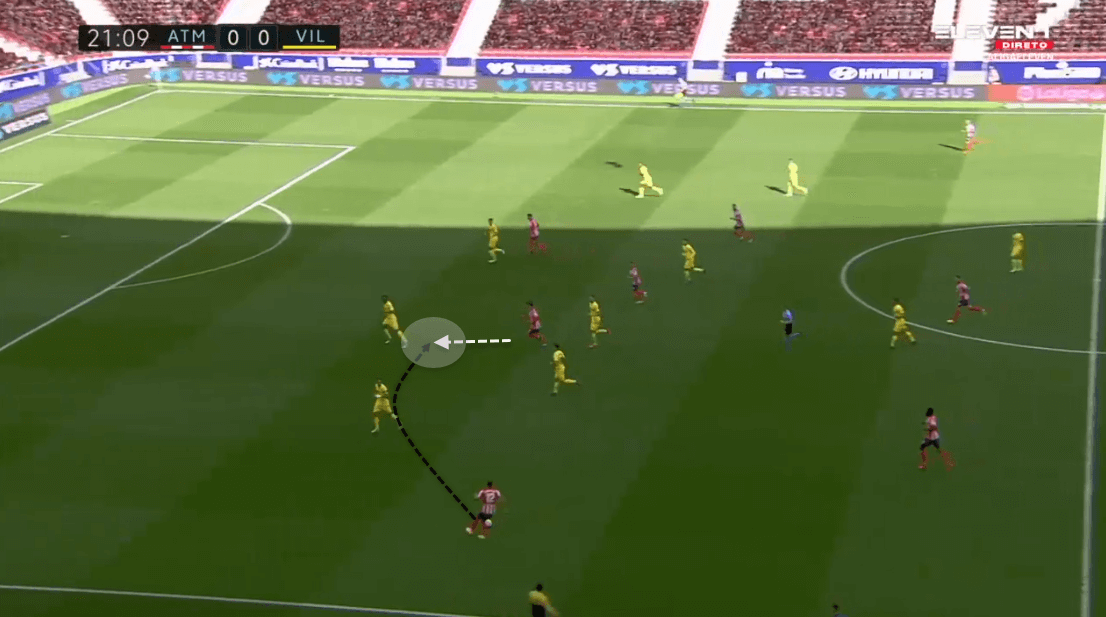 However, on several occasions, like the one shown above, Félix’s inwards presence was also directed in receiving the ball from the wide. Since the opposite flank had less supply than the left flank, most of the balls were not met by the striker, but by the Portuguese.

Diego Simeone’s side was able to exchange passes, build-up well and move the ball forward. However, the inability to break into the final three and scarce supply of decisive ball made them walk out goalless yet again. Like the pass map indicates, the passing and supply was effective, especially towards the wide sides. However, it becomes thin as we move towards the final third. 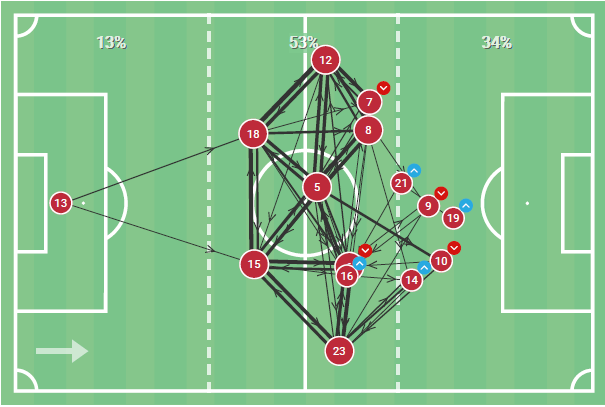 Known for their resilience and ability to defend in a low block with discipline for longer period of time, Atlético Madrid displayed just that against the Yellow Submarine. Adopting a 4-4-2 off-the-ball structure, Atlético managed to reduce the vertical gap between the last and the first line and made sure minimal threats came from the centre. 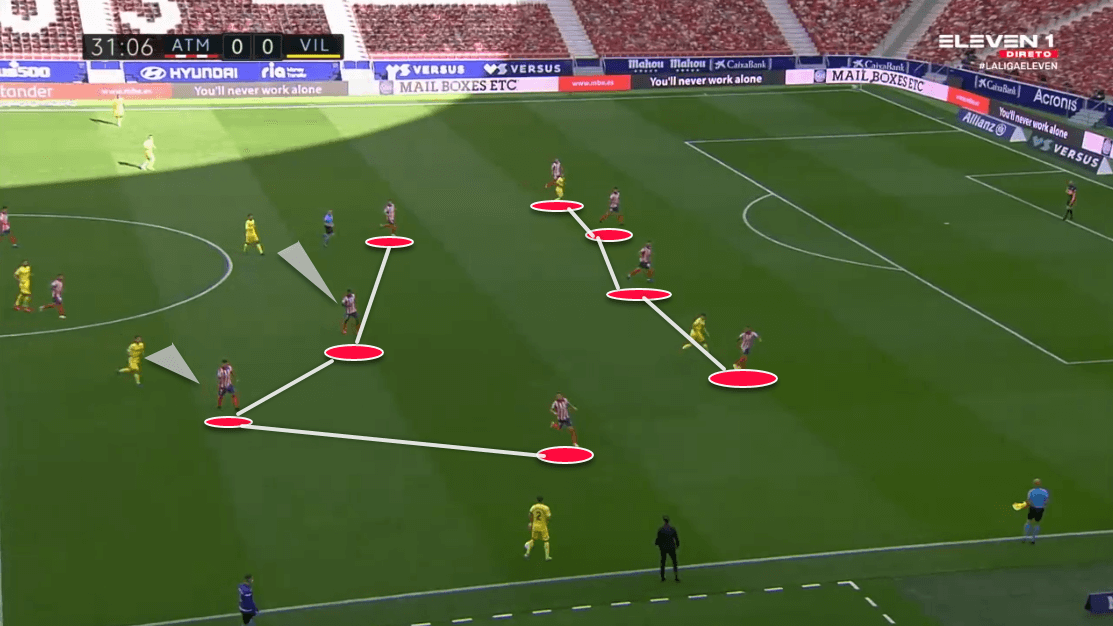 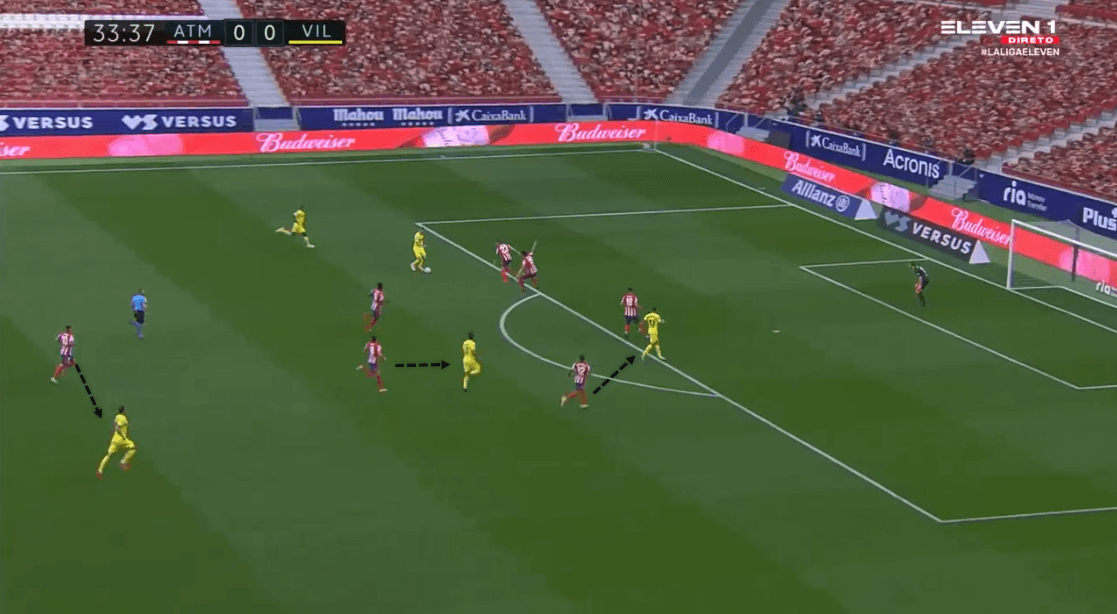 In addition, Simeone’s approach also depended upon the zone in which Atlético decided to sit and defend. Although the side allowed Villarreal to build-up in the wide areas, the central zones, which normally are more prone to goal-scoring opportunities, were well-covered and taken care of. 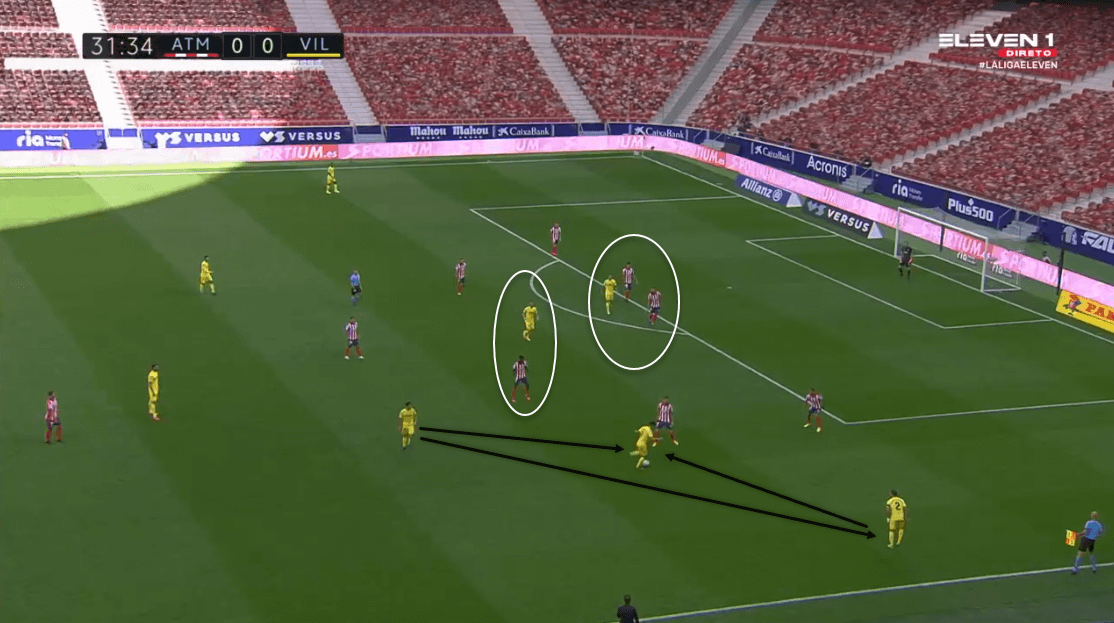 Like we can see in the above instance, the central strikers are properly covered, which means the ball carriers needs to go wider or to other options, but not the central ones. Despite having a comfortable build-up and carries, Villarreal could only yield an xG of 0.63, due to Atlético’s compact and calculated approach.

Although it was yet another frustrating draw for Simeone and company, pushing them to the 11th spot in league, the side will definitely look to make the central attackers more functional with better supply chain. As for Villarreal, they’ll consider this as a satisfactory result and will look to build on their strengths.