Marseille came into this game with mixed feelings, seeing as they had drawn their previous three games. Even though they showed great promise at the beginning of Ligue 1 by beating PSG, their progress has slowed down. With the win in this game, they will go to the UEFA Champions League with a good spirit.

On the other hand, Bordeaux had won, drawn, and lost games in their previous three. In their last game, they beat Dijon by 3-0 which was great. They sit in twelfth place in the league but have the team and potential to be doing better.

This game ended in a 3-1 win for Marseille in their stadium. They were quite superior throughout and the game was conditioned by the early lead that Marseille took in the fifth minute. This meant that from the beginning, Bordeaux had to set their tactics in order to make a comeback and Marseille had to keep the lead and seek to make it higher. 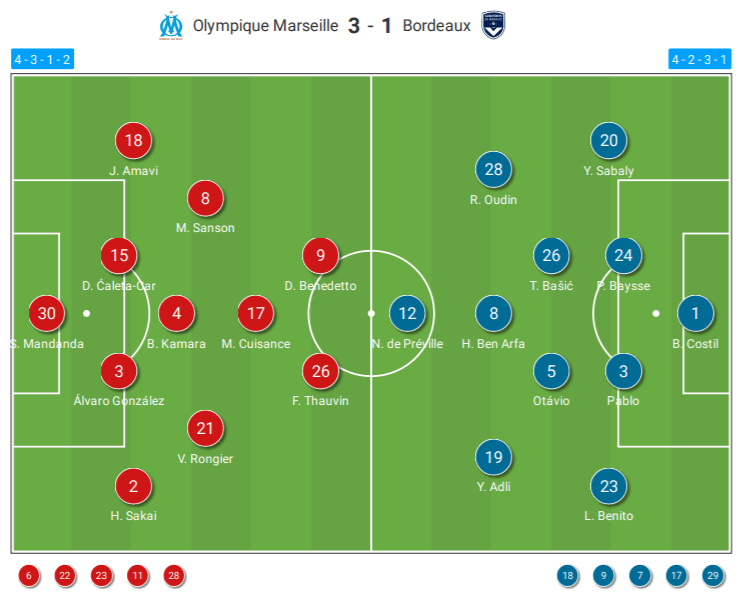 As mentioned before, Marseille played in a 4-3-1-2, with Darío Benedetto and Florian Thuavin leading the attack. In the midfield was Morgan Sanson, Boubacar Kamara, Valentin Rongier, and Michaël Cuisance just ahead of them. The two full-backs were Jordan Amavi and Hiroki Sakai, with Álvaro González and Duje Ćaleta-Car as centre-backs.

Bordeaux played the whole game in a 4-2-3-1. The sole striker was Nicolas de Préville and Hatem Ben Arfa behind him as attacking midfielder. To Ben Arfa’s sides were Yacine Adli and Rémi Oudin. The two pivots were Toma Bašić and Otávio. Then, the back four consisted of Loris Benito, Pablo, Paul Baysse, and Youssouf Sabaly.

Since Bordeaux was losing already from the beginning of the game, they had to put pressure early on to make Marseille uncomfortable. They did not press high all the time but chose the right moments to do so. However, the Marseille formation was made to have an effective build-up.

This is because they essentially have 4 midfielders through the middle who can help get the ball played out. This presented a problem for Bordeaux as it meant that they had to bring in more players to the pressure if they wanted it to work. Consequently, bringing more players up meant more risk if Marseille managed to get through the press.

In the first times that Bordeaux pressed, Marseille had superiority and so was breaking through the pressure with ease. This then meant that they got rid of three or four Bordeaux players out of the play easily and could attack with more danger.

In the example below, Bordeaux press high but with not enough players. As we can see, the striker and the attacking midfielder cover the two centre-backs. However, only one Bordeaux midfielder is coming in to press against two Marseille midfielders who have come to support. This superiority meant that Marseille easily played out in this action. 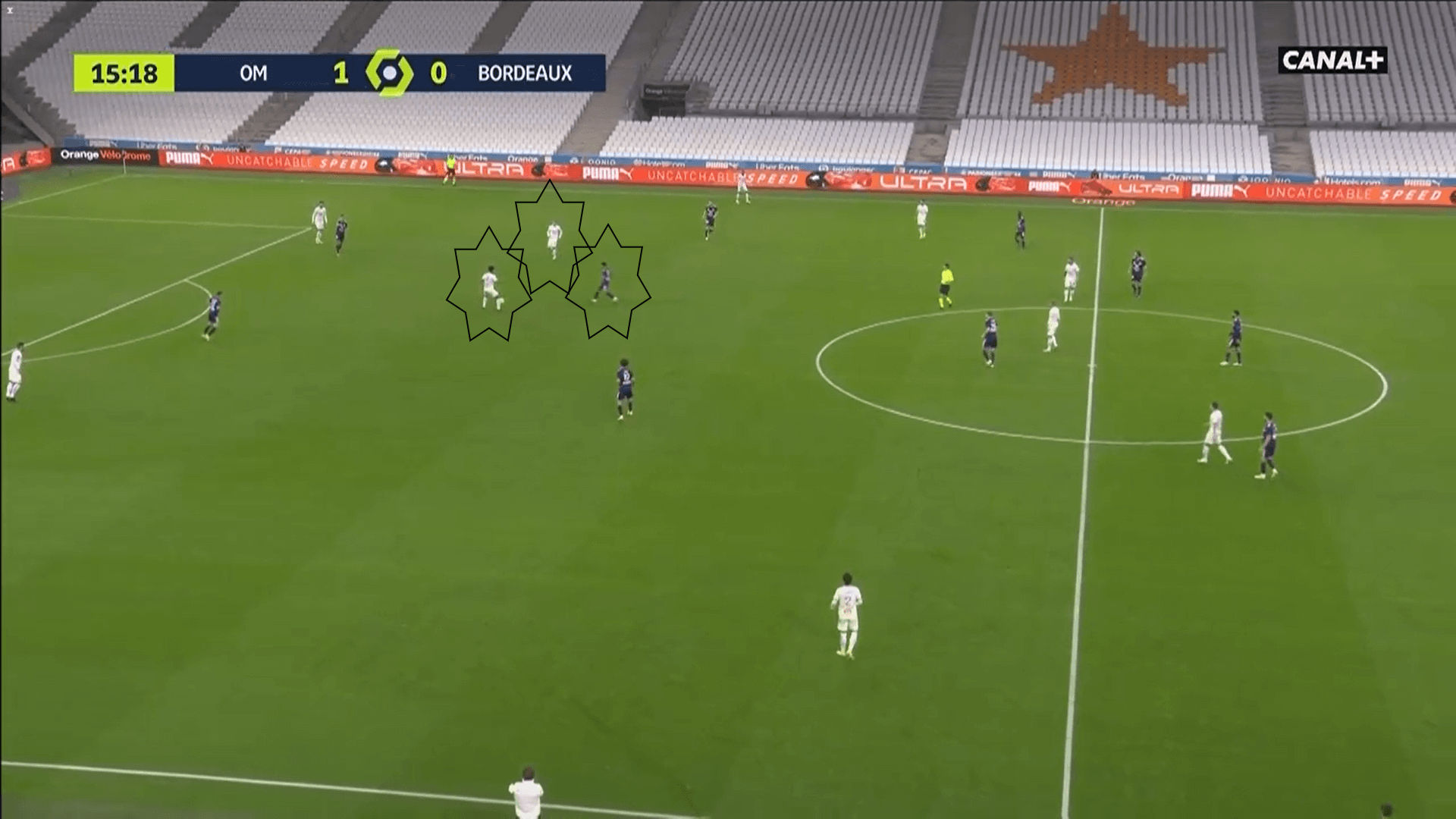 Bordeaux’s coach saw the problem and decided to fix it. In the second half, they pressed with more players and more intelligently. In the image below, we see how Bordeaux match the Marseille players in numbers. This time, there are also two Marseille midfielders who have come to help but this time, one of Bordeaux’s pivots is coming in to cover.

With this intense press, Marseille’s goalkeeper is forced to kick the ball out which is what Bordeaux wanted. 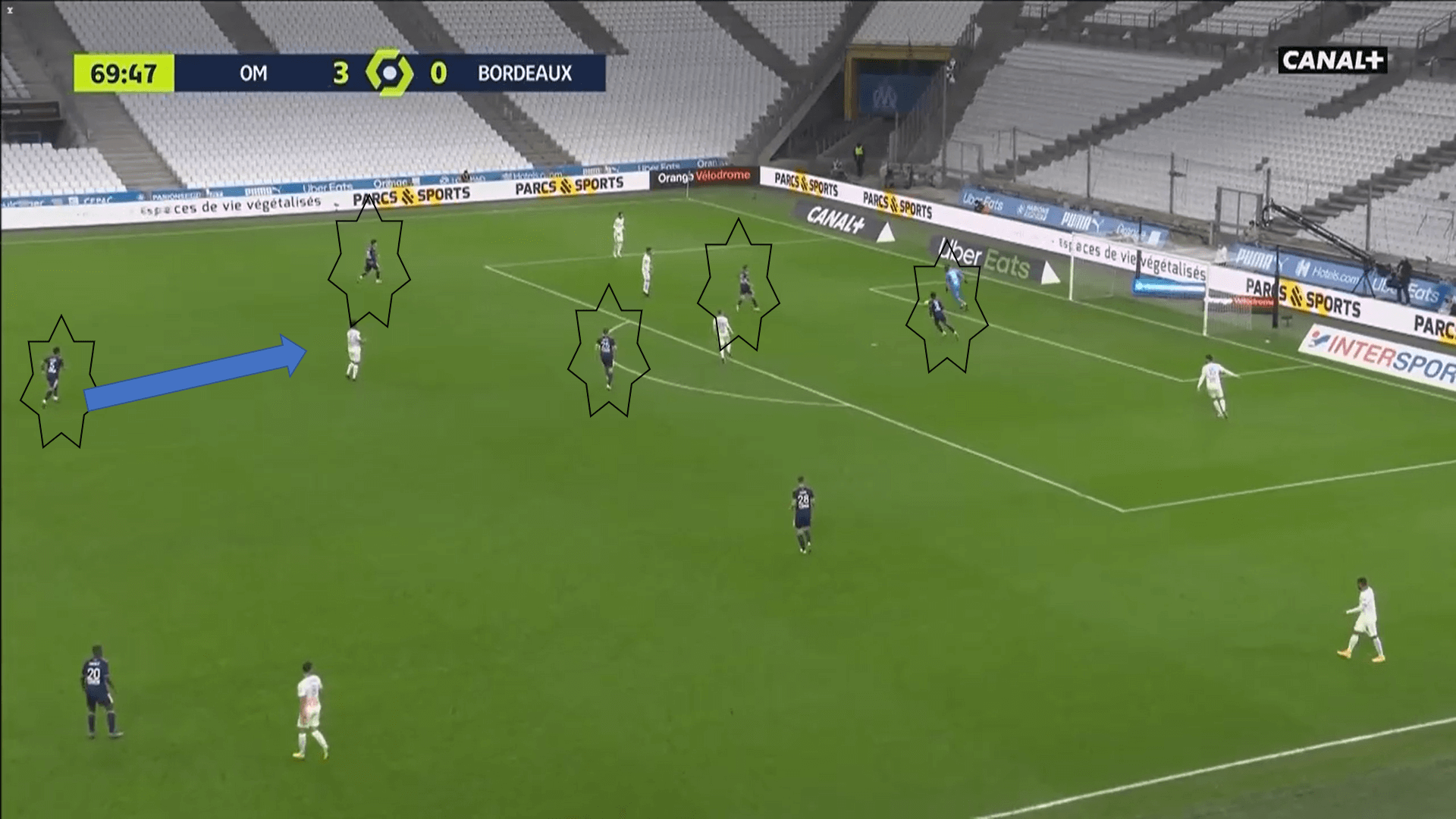 It is understandable why Bordeaux’s coach did not want one of the pivots to go pressure at first. It is because Marseille’s strikers do not stay in their positions and generally come down to ask for the ball. If they did so, it would mean that the two strikers would go up against the pivot who has stayed behind. Therefore, this could cause danger higher up the pitch.

We have already talked about previously how this formation helped Marseille in the build-up as they had many players in the middle who would come to overload this area and make playing out easy. There are more advantages though.

Sometimes there are no ways to go through the middle and so somebody must create an option in the wing. Since the team does not have wingers, the strikers would move into these positions and create surprise.

That is probably why André Villas-Boas put Thauvin as striker, because he is naturally a right-winger. Therefore, he could move into these positions unexpectedly as we see in the image below. 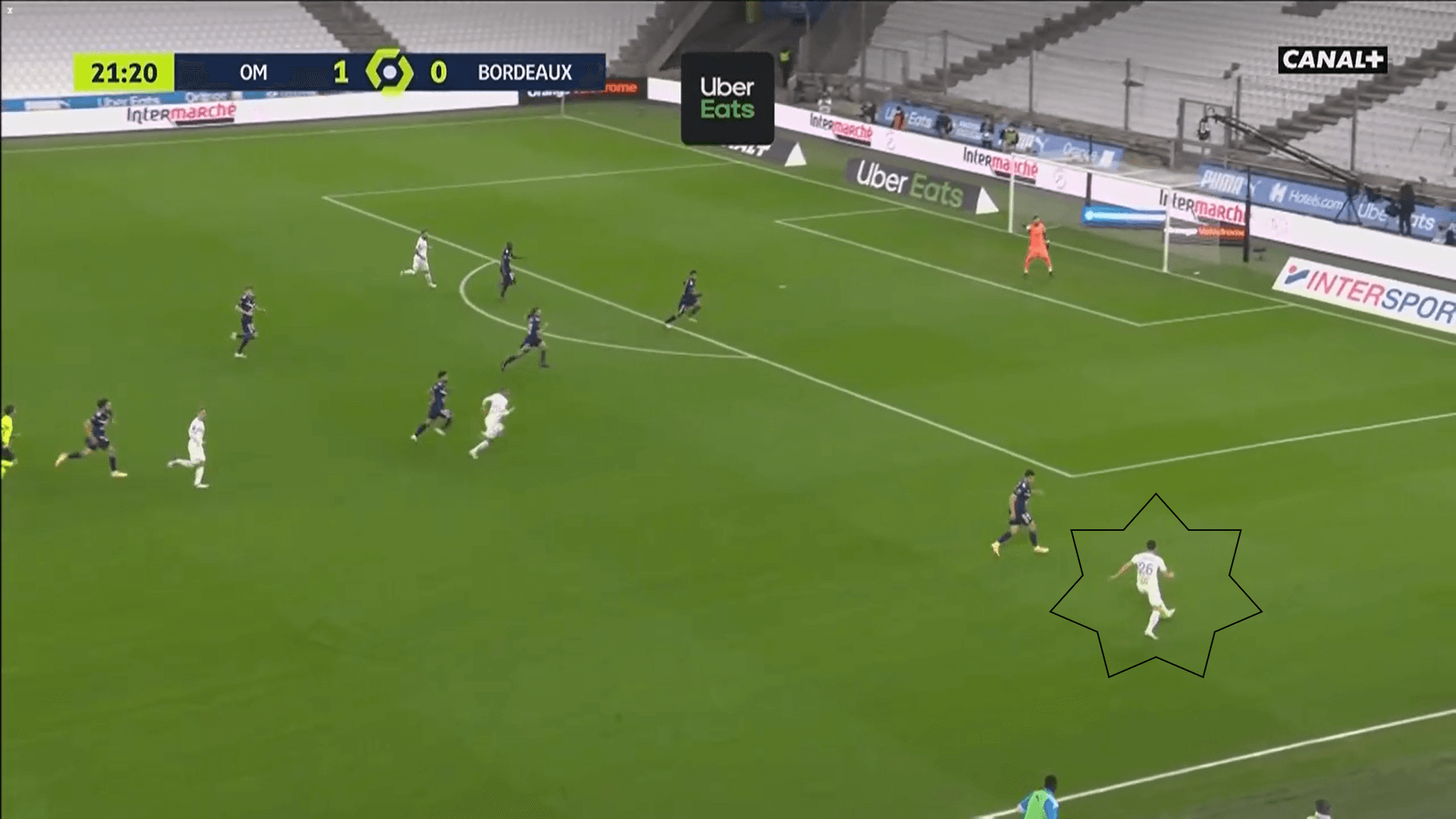 With these passes, they can find spaces in the middle, which is usually the most congested area. Marseille played with three centre-midfielders and one attacking midfielder. This made way for many passing options created in these areas.

For example, in the image below, they made a quick one-two in the middle which attracted players to this area. They then quickly switched the ball after that. This action of playing through the middle and attracting players to then switch the ball to the wings is a great tactic which we will explain now. 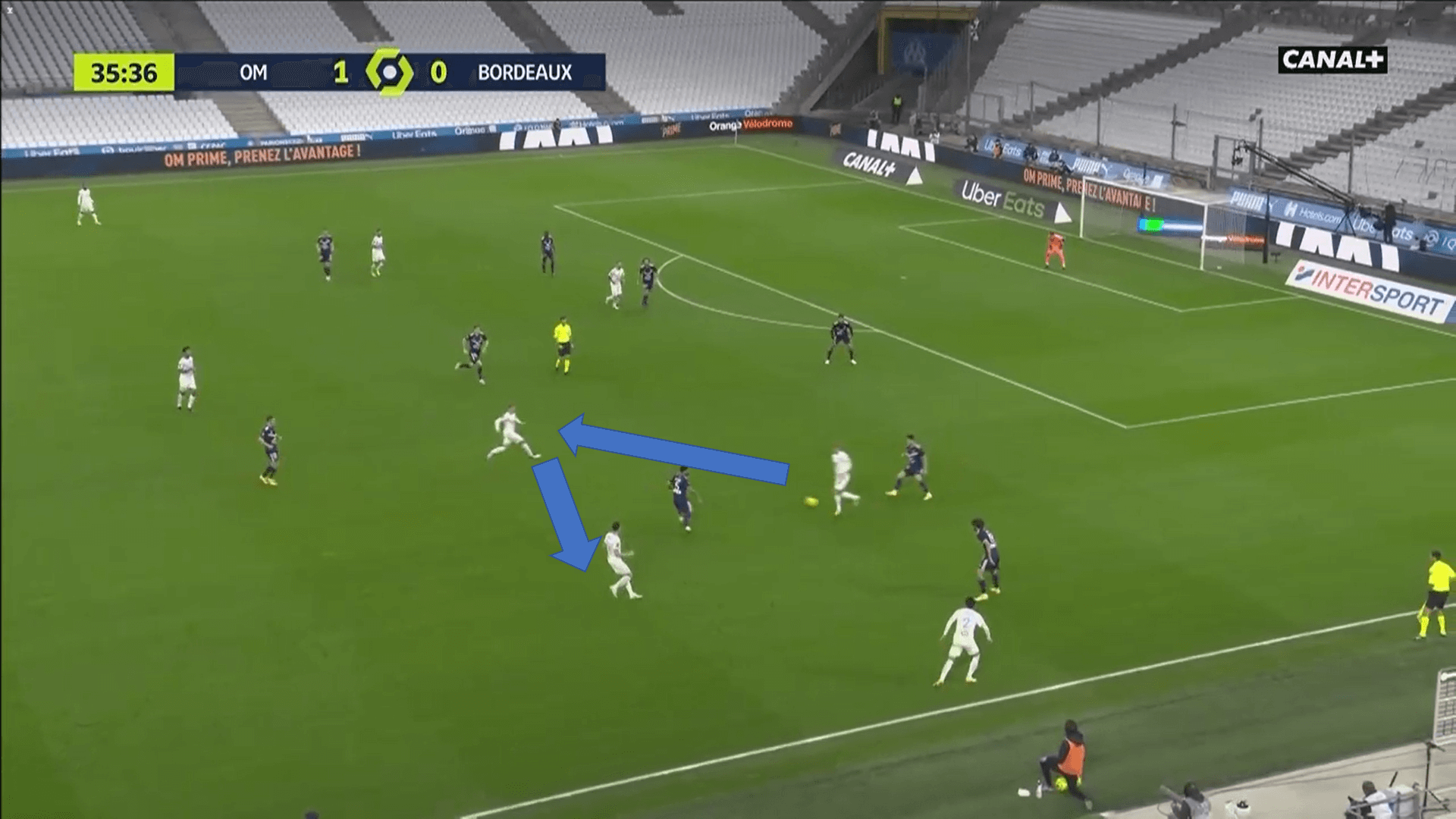 Having many players in the middle does not mean that they do not attack from the wings. It is the opposite because now the full-backs need to have an even greater attacking participation. In some situations, this formation is intended to portray that Marseille’s greatest strength is through the middle so that the opponent concentrates their defence there. Meanwhile, the full-back is making a run in behind.

Since the opponents see that there are so many players in the middle, they become more compact to produce fewer spaces in this area. This is perfect for Marseille seeing as they have two very attacking full-backs. In fact, their left-back scored two goals in this game.

The best example is in the image below. There are 4 Marseille players who are potential receivers of a pass and Bordeaux is concentrating on them. Even the right-back has come inside to make the team more compact. At the same time, Marseille’s left-back sees this opportunity and makes a run in behind.

He made this run a couple of times during the game and produced danger from here. 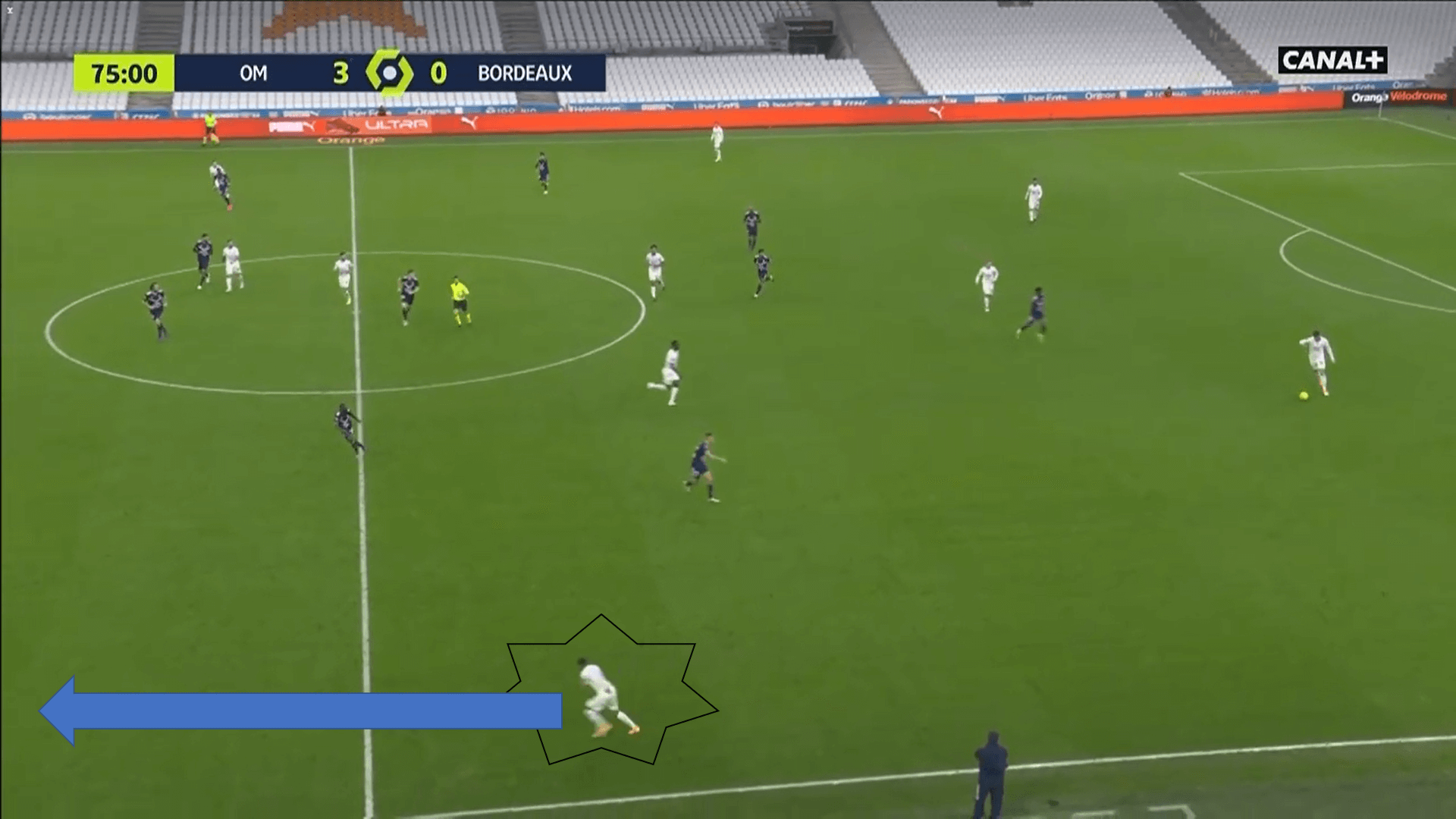 The obvious disadvantage of this formation is not having wingers. We have seen how they fixed it when attacking which worked well but when defending it is different.

We see a clear example in the image below, where Marseille is attempting to press Bordeaux from playing out. For the goalkeeper, it is an easy option as he sees how open the left-back is and just makes a long pass there. 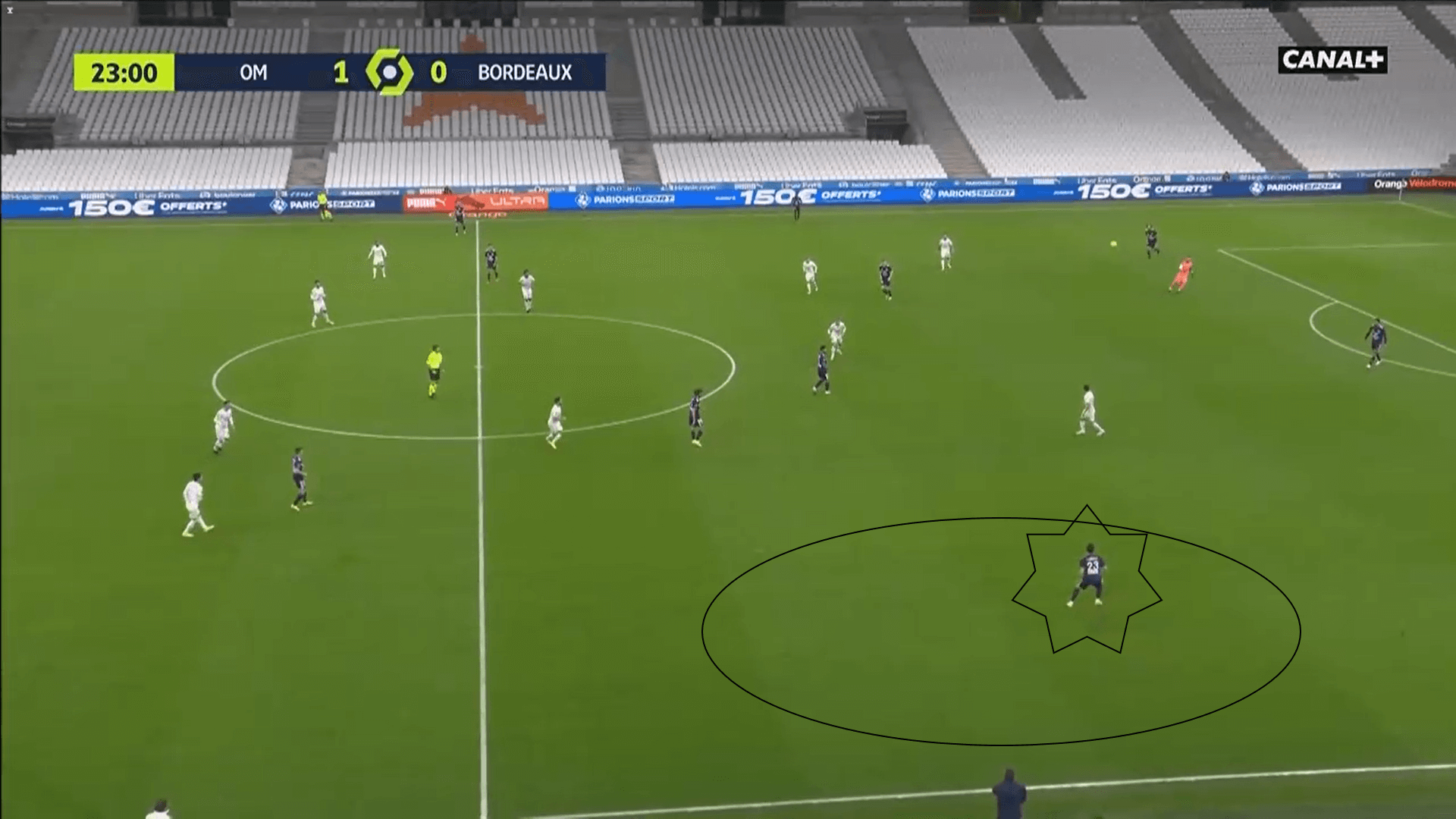 In order for the full-backs to be pressed, the Marseille full-backs would have to come up themselves which is risky since they leave their position and space for Bordeaux players to go to. This is why Marseille’s coach preferred that Bordeaux played out easily than for this to happen.

Furthermore, without a winger, superiorities for Bordeaux were created on the wing. The first threat was that the Bordeaux right-back was always free out wide since there was no winger to defend him. This meant that for the Bordeaux team, they knew that if they could not make a successful play on the left, they could always switch it to the right.

The right-back would then have time and space to put a good cross in for the attackers. 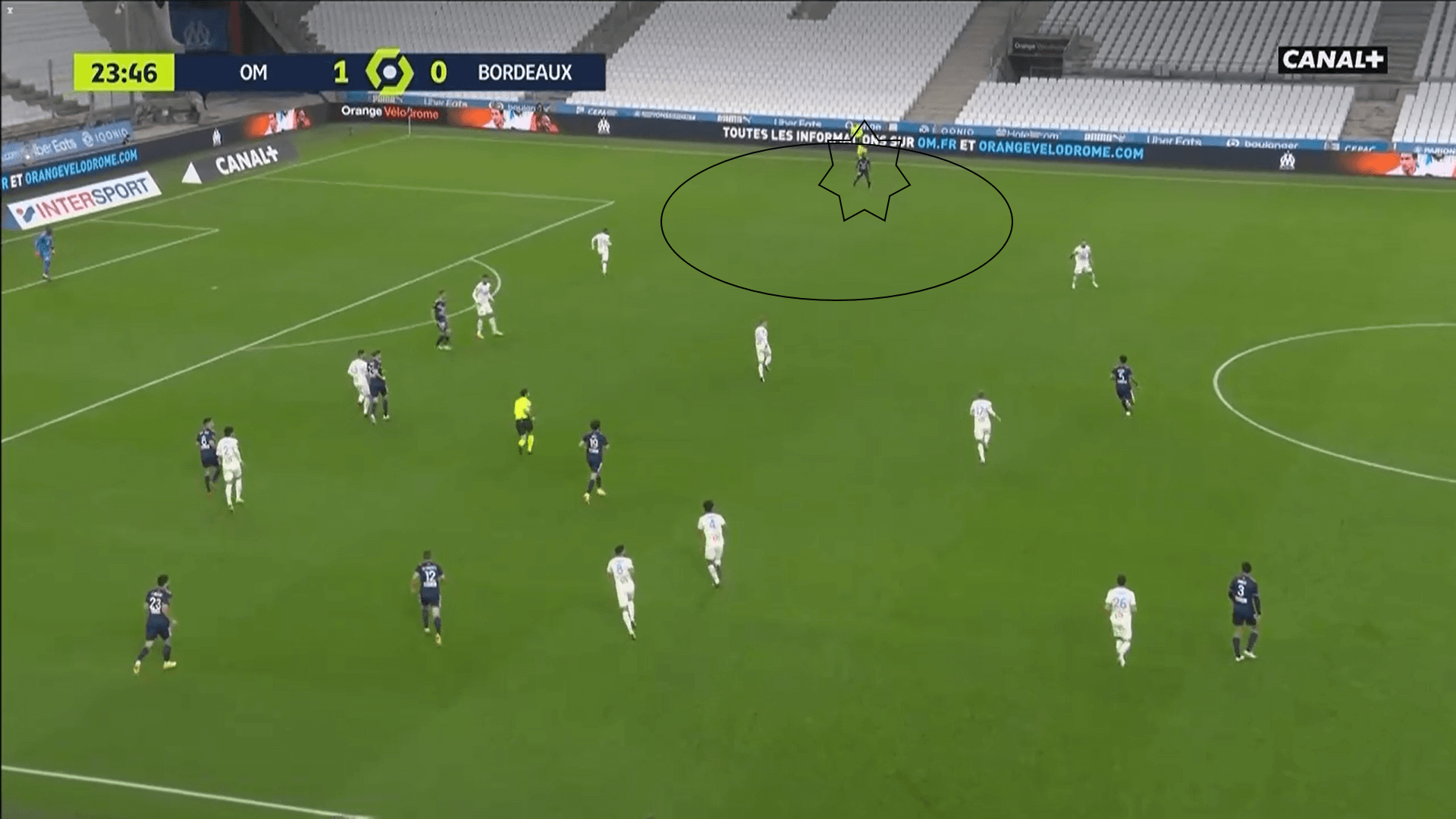 Connected to this is the overloads that Bordeaux would intentionally create on the sides. There is already a 2vs1 superiority against the Marseille full-back. However, Ben Arfa could go to whatever side he wanted to make this superiority even larger and make attacking easier.

This would create a 3vs1 and could produce a lot of danger from the sides. It would mean that a centre-midfielder would have to quickly come and help and even then, it would still be a 3vs2. In the example below, we see how Ben Arfa has moved to the left side and is preparing a cross seeing as he has time due to the superiority created. 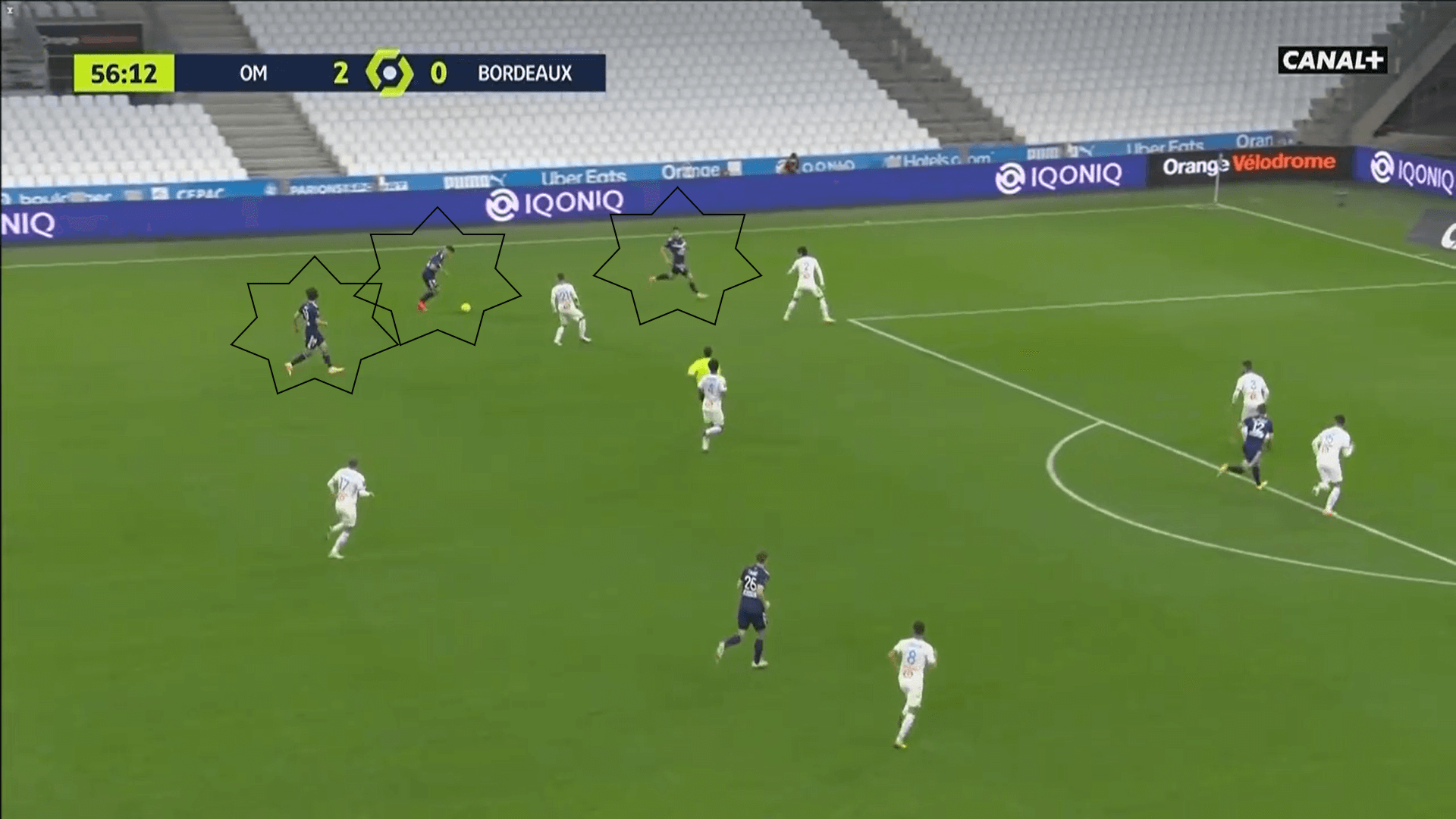 Moreover, another disadvantage is when the full-back would have to go up and defend Bordeaux’s full-back. This meant that they left valuable space behind for Bordeaux attackers to take advantage of. Therefore, the centre-back would have to come and cover this space which would take him out of position.

If Bordeaux played intelligently, they could bring both players out of position and create danger. With the centre-back going to cover, it destabilises the whole defence and makes the whole team shift over.

In the image below, the centre-back is going to cover the striker who has moved into the full-back’s position. The centre-back now has to be aggressive and make sure that the striker does not turn around. If he is unsuccessful, the striker has now gotten rid of two defensive players from their position. 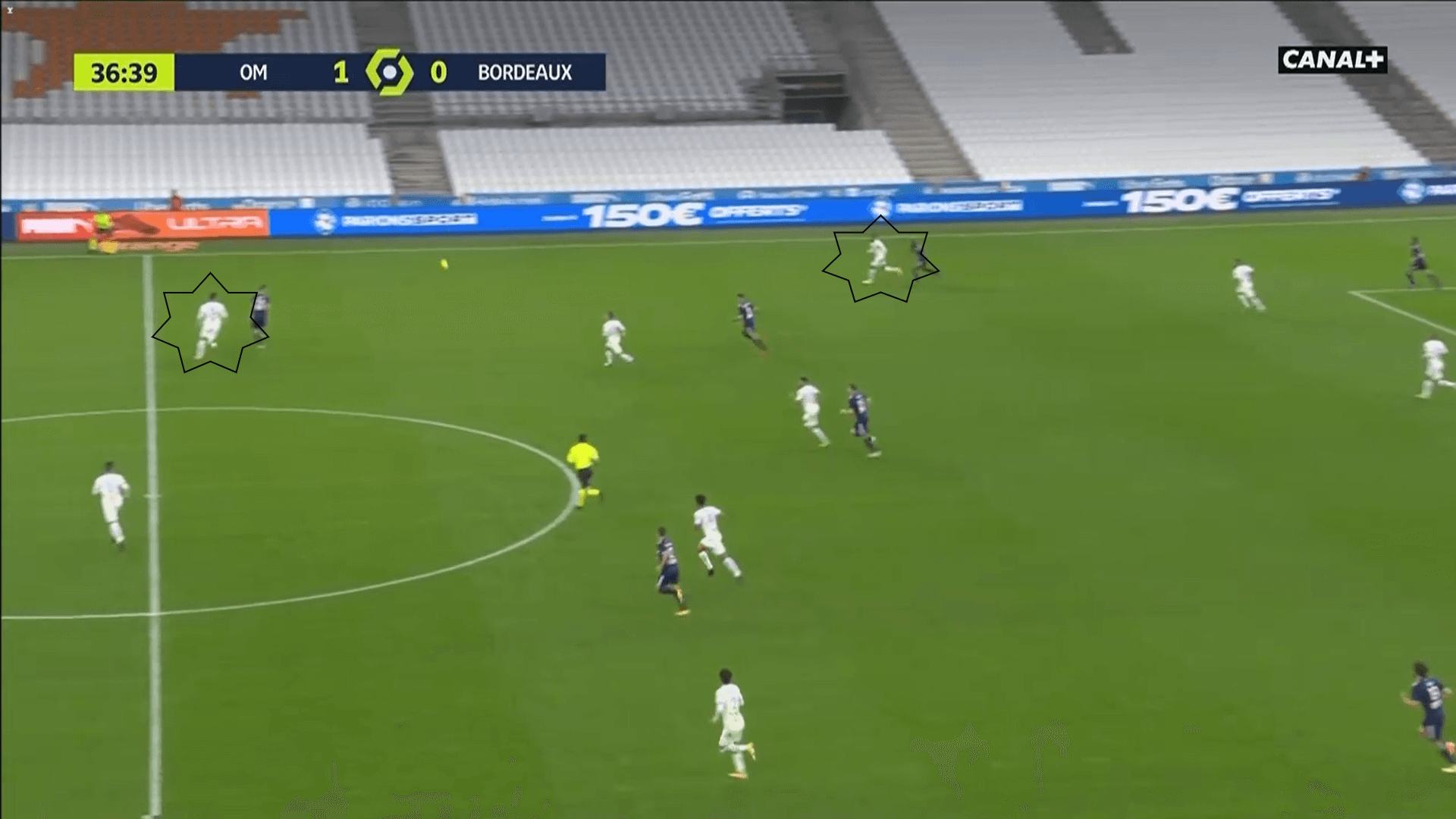 Overall, the early lead conditioned the game as Bordeaux had to take a more attacking stance. However, it was interesting to see how Marseille adapted to the advantages of the 4-3-1-2 formation such as having an effective build-up and surprising with the full-backs. It is true that Bordeaux should have used the fact that Marseille had no wingers more effectively to create danger.

In conclusion, Marseille goes into the UEFA Champions League with good sensations and Bordeaux will need to improve if they want to finish higher in the table than last year.