Rennes came into this game off the back of a negative run. In Ligue 1, they had lost two and drawn one of their last three games. With this loss, they now stand in ninth place, very far away from the third-place finish they achieved last year. It would seem that the added UEFA Champions League games are taking their toll. Here, they hold the last place in a group where Chelsea and Sevilla were favourites. All in all, Rennes is struggling right now.

On the other hand, Lens is being the surprise of Ligue 1 this season. The newly-promoted team is eighth, as this win put them above Rennes. In their last three games, they achieved all three types of results. They drew one, lost one, and won the other game. Once they secure their spot in Ligue 1, could they even fight for a Europa League place?

Lens won 0-2 in this game against Rennes where it was an even game but Lens took advantage of their chances. Rennes improved in the second half by dominating more but it was not enough. 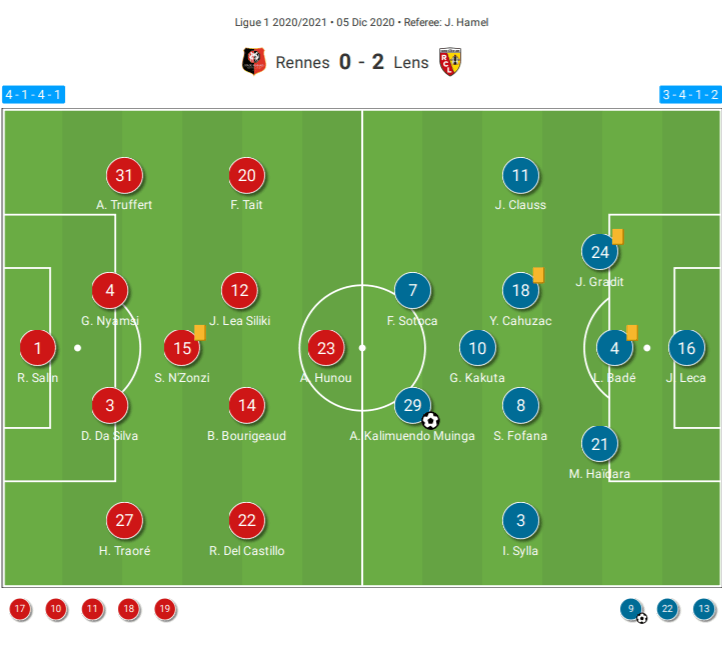 Rennes started the game in a 4-1-4-1, with Adrien Hunou as a striker. On the wings were Flavien Tait and Romain Del Castillo with Adrien Truffert and Hamari Traoré being the full-backs. The midfielders were Benjamin Bourigeaud, James Léa Siliki, and Steven Nzonzi as a defensive midfielder. Then, the centre-backs were Damien Da Silva and Gerzino Nyamsi.

Lens played in a 3-4-1-2, with Arnaud Kalimuendo and Florian Sotoca leading the attack. Gaël Kakuta was the attacking midfielder, having Seko Fofana and Yannick Cahuzac behind him as midfielders. The two wing-backs were Issiaga Sylla and Jonathan Clauss. Lastly, the three centre-backs consisted of Massadio Haïdara, Loïc Badé, and Jonathan Gradit.

Rennes like to play it out from the back. In fact, they have a defensive midfielder not only to provide balance in defence but also to help out in the build-up. Lens have the problem of not having wingers, and so we will see how this affected their pressure.

Moreover, the two midfielders are man-marking the two other Rennes midfielders.

It is important to note that when the defensive midfielder sometimes dropped down to the defensive line to help in the build-up, the Lens team stayed further back as they prioritised protecting the middle. Either way, they were usually in a medium-high block when pressing. 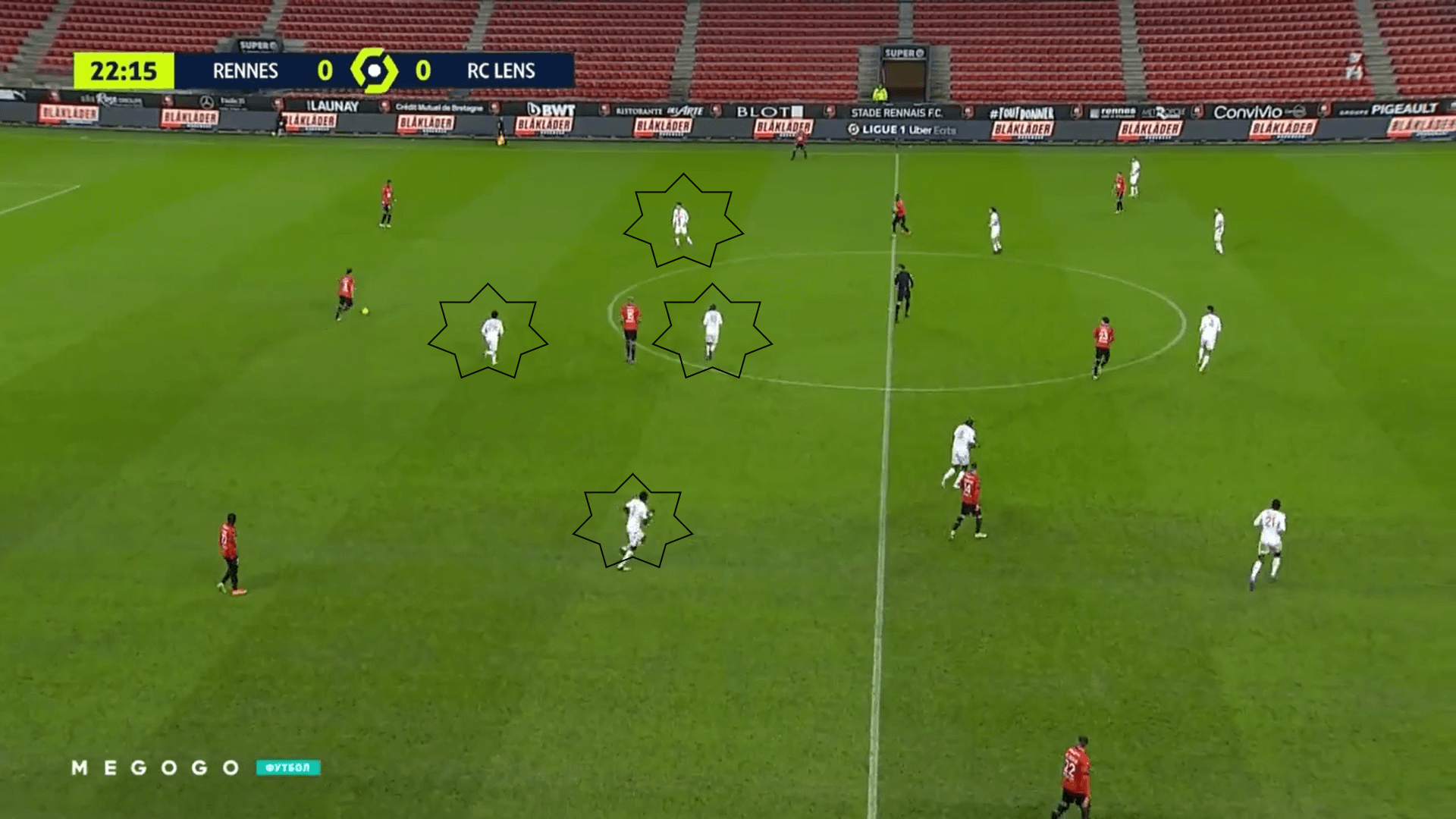 At the beginning of the first half, they were having problems in their pressure because the Rennes full-backs would always be alone. Therefore, it would be easy for Rennes to play around their pressure as they would have superiority.

For example, in the image below, the left-back has just received the ball and has a lot of space to drive into. Wherever he drives the ball into, he will create superiority and cause problems for Lens. This happened the times that the Lens wing-back decided to stay with the Rennes winger instead of going to the left-back in possession. 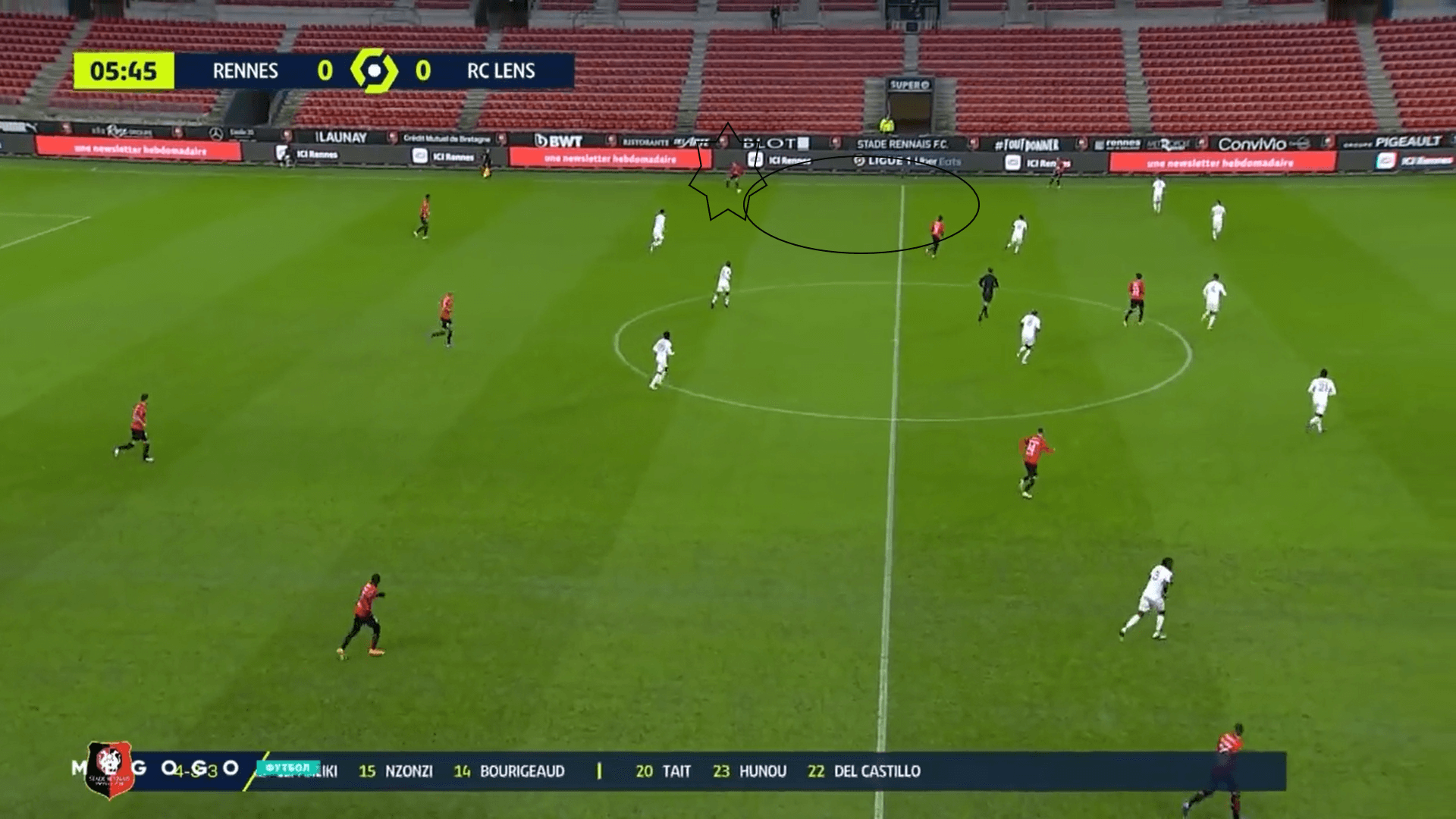 After a while, the Lens wing-back started to advance more as the left-back controlled the ball. This caused the whole Lens team to shift to the right side. Since the wing-back goes up to the left-back in possession, he leaves the Rennes winger free. Thus, the nearest Lens centre-back has to be aware and quickly go to him so that he is not open. Then, the two other centre-backs have to move in to cover the space left. This is seen below.

If done well, it solves the problem that they were having before. However, if the team is uncoordinated, it could cause another great problem and leave opponents open in the attack. 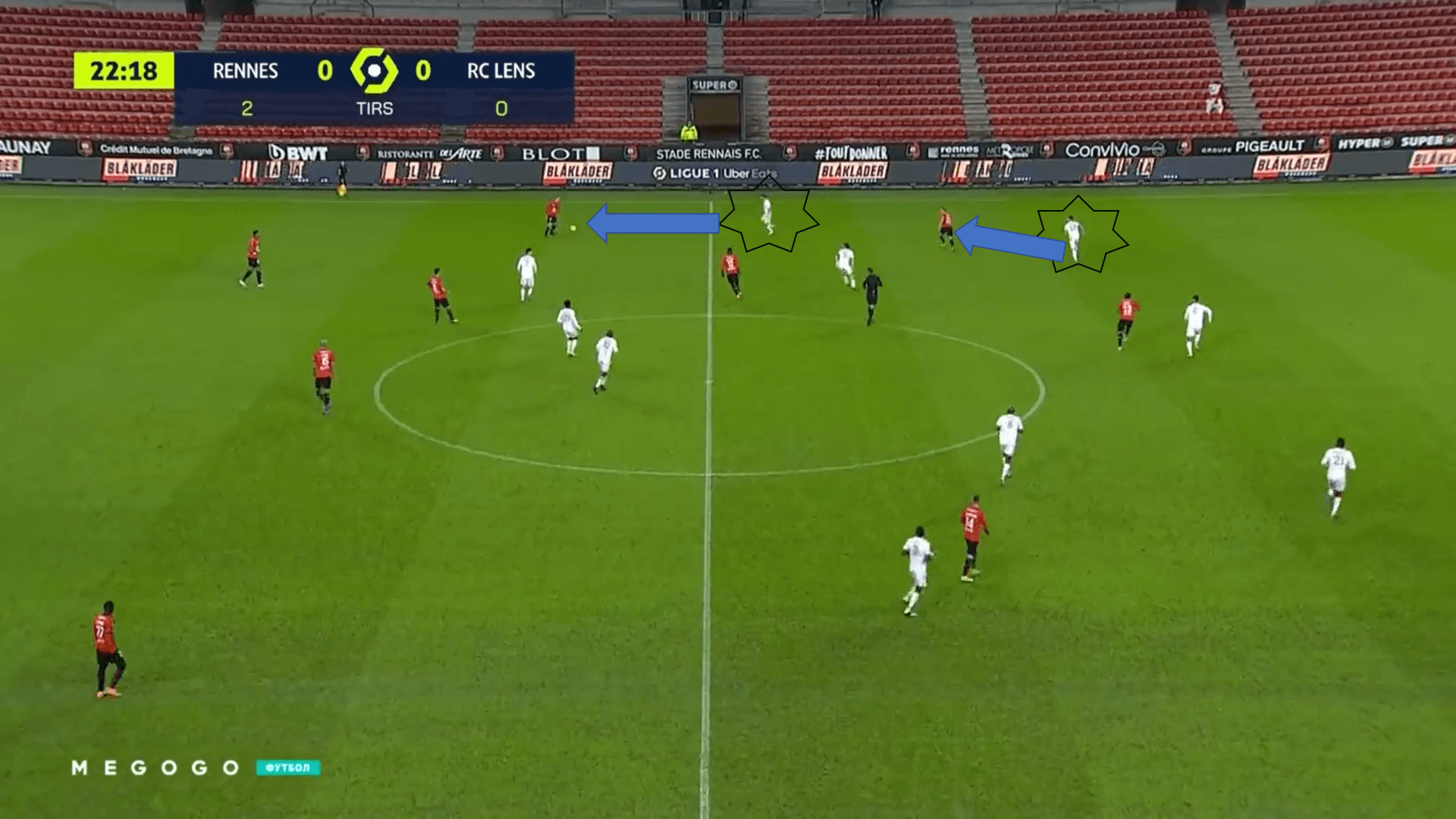 The Lens coach must have seen this inconvenience they were having and fixed it in the second half. He told the wing-backs to be more advanced when pressuring. Now they were meant to press the opponent full-back as the ball was arriving to him and not once he received the ball like before. This improved their pressure as it cut out the easy way that Rennes had to play the ball out.

As seen below, everyone else is doing the same pressure as before but now the Lens wing-back is almost on the opponent as the ball is halfway to him. This made their pressure intensity increase. 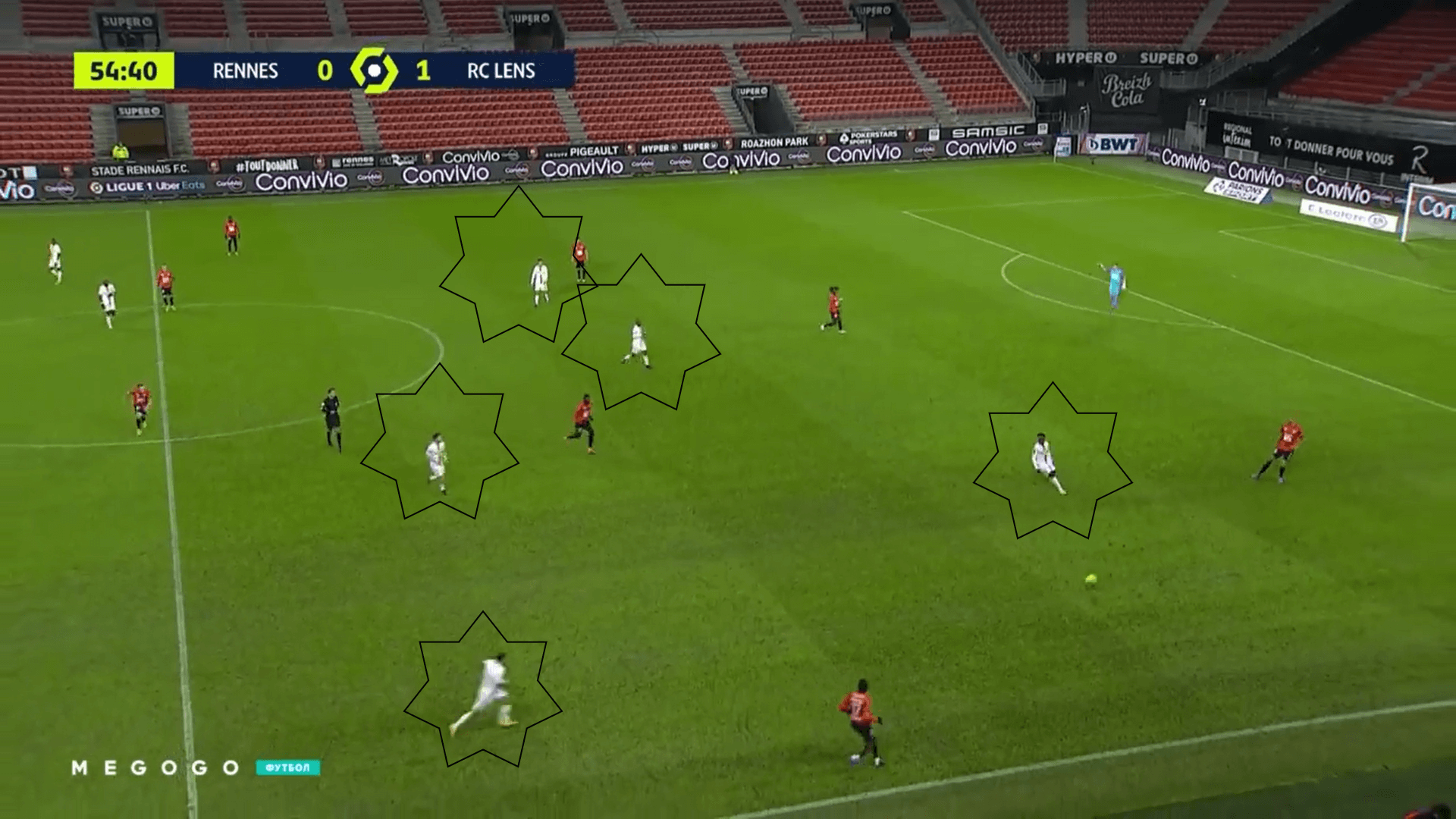 In fact, the recovery that led to Lens’ first goal was thanks to the first time in the game that the Lens right wing-back had decided to pressure intensely forwards.

Rennes pressured well throughout the game. Thanks to this, Lens barely played the ball out during the game and instead relied on long balls. Since Rennes do have wingers, it was easier for them to have a man-marking strategy. Also, they pressured in a high block, to ensure that Lens did not have the chance to play out.

This decision of who the winger should mark would depend on which wing-back was going to come down to help. This encouraged Lens to kick the ball upwards, which they did not mind as this pressure meant that in the attack, they would have the same players as the defence. This meant that if they won the aerial duel or the rebound, they could create danger from there. 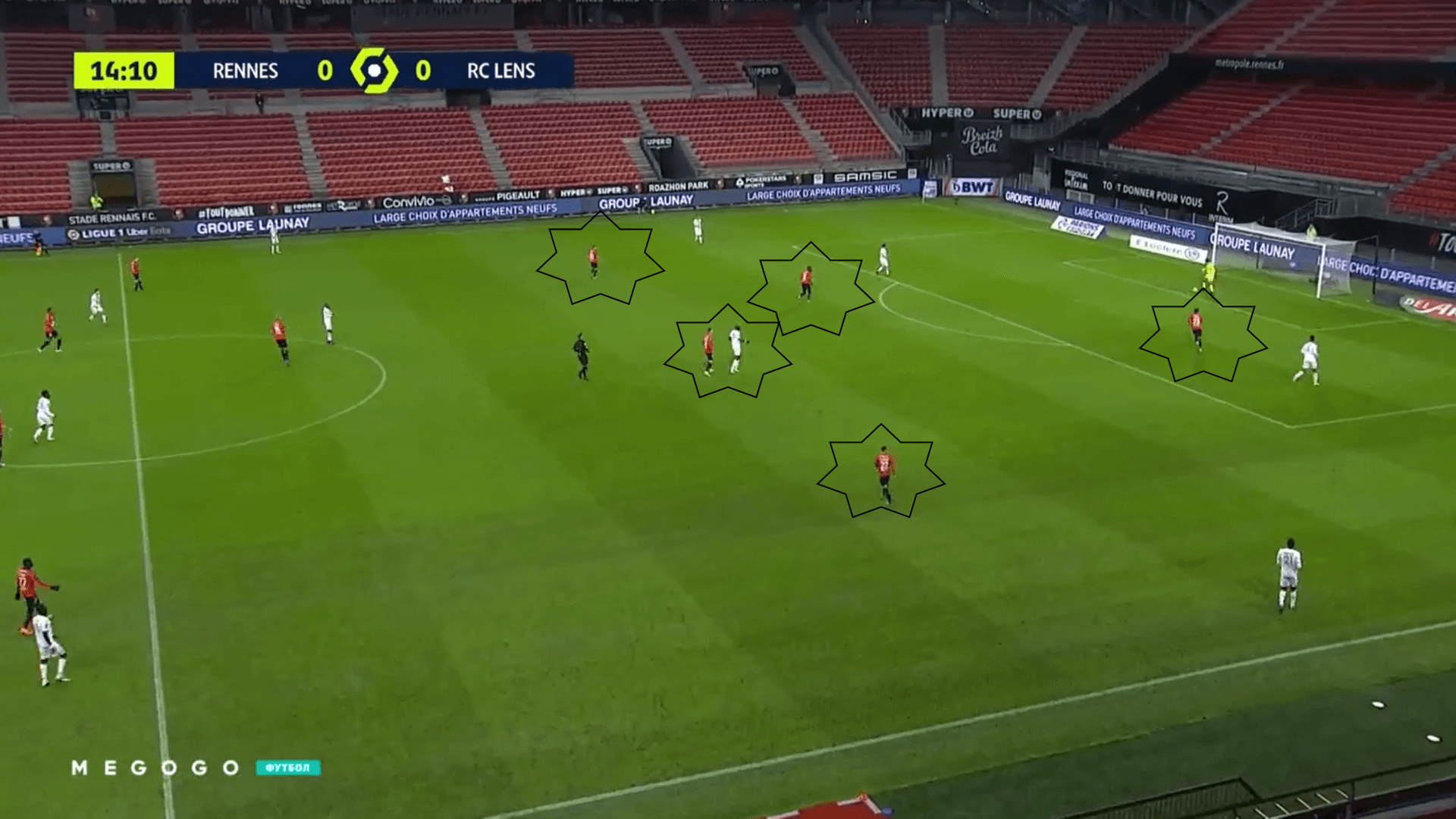 Since Rennes were losing for most of the game, they had to provide attacking options. There were two main ways they produced danger. The first way was taking advantage of the Lens centre-backs when they came up to pressure their marker.

When a centre-back goes out of his position to follow his marker, he has to be very strong in defence because he is leaving space behind which the opponents could exploit. Furthermore, the other Lens centre-backs have to be aware when this happens and cover the new space.

Rennes knew this and so they made attackers come down to ask for the ball to take their marker with them. This opened up space behind where a Rennes player would make a run into.

The best example is down below. One of the midfielders received the ball close to the defensive line and a centre-back went to press him. However, he does a first-time pass to the striker who is already going into the space that the centre-back vacated.

The smooth transition of this play showed that they had practised it before the game. 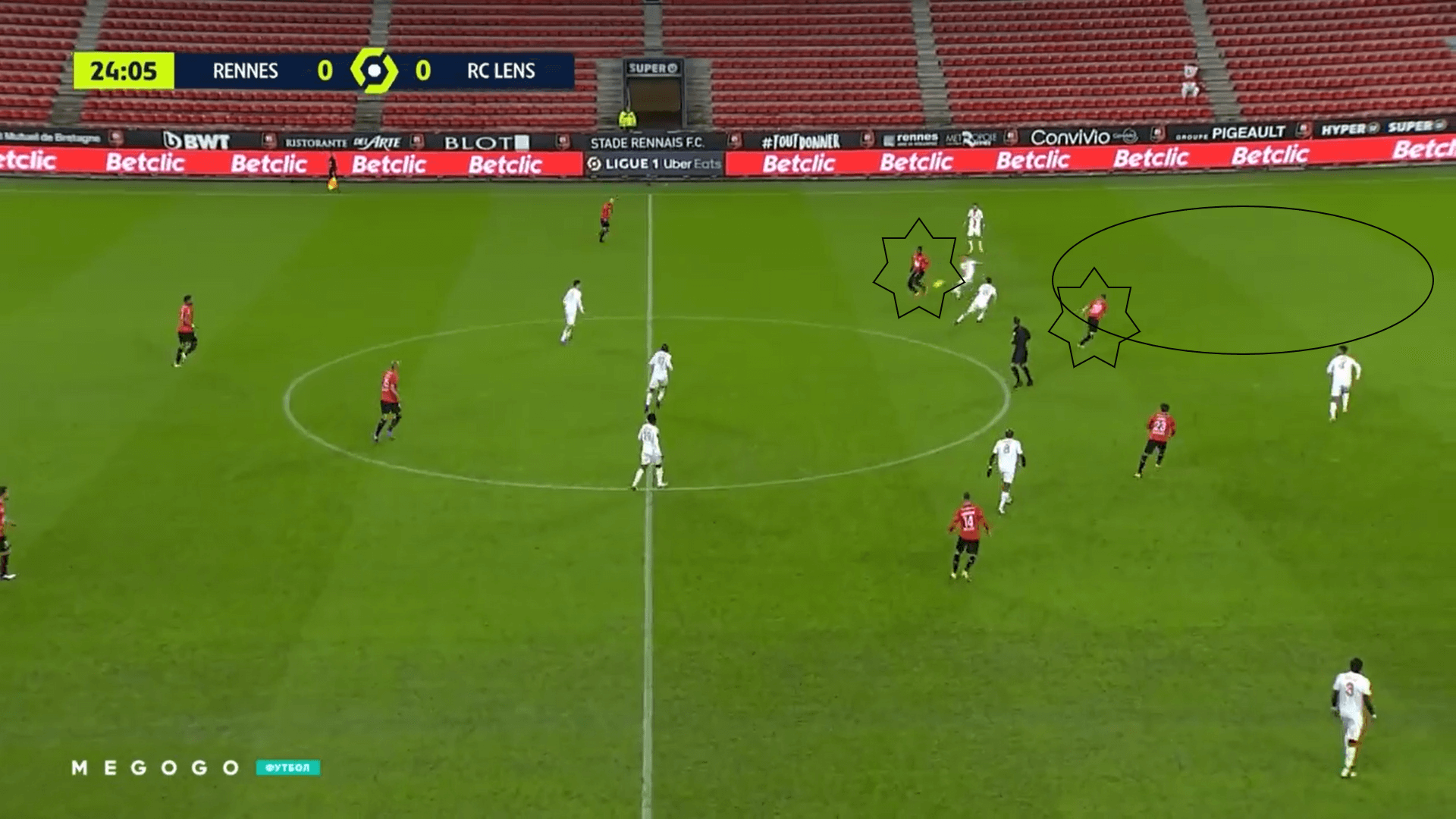 In the second half, most of their attacks were being made from the right side. They were gathering people in that side to create superiorities and get crosses in. They managed to get quite a few crosses in but no one could get to the end of them.

Since Lens only have a wing-back on the sides, Rennes played on the right side with three players: the right-back, the midfielder, and the right-winger. This made the Lens team have to shift which would open up spaces elsewhere, but they still focused their play on this side.

Below is an example of a play where these three players connected well to advance. It is clear that Lens had to make their wing-back advance a lot and needed the nearest centre-back to help combat this.

Therefore, if they got a cross in, Rennes could have a superiority if they got many players forward as a centre-back would be defending the winger, meaning they would have fewer players to defend with in the box. 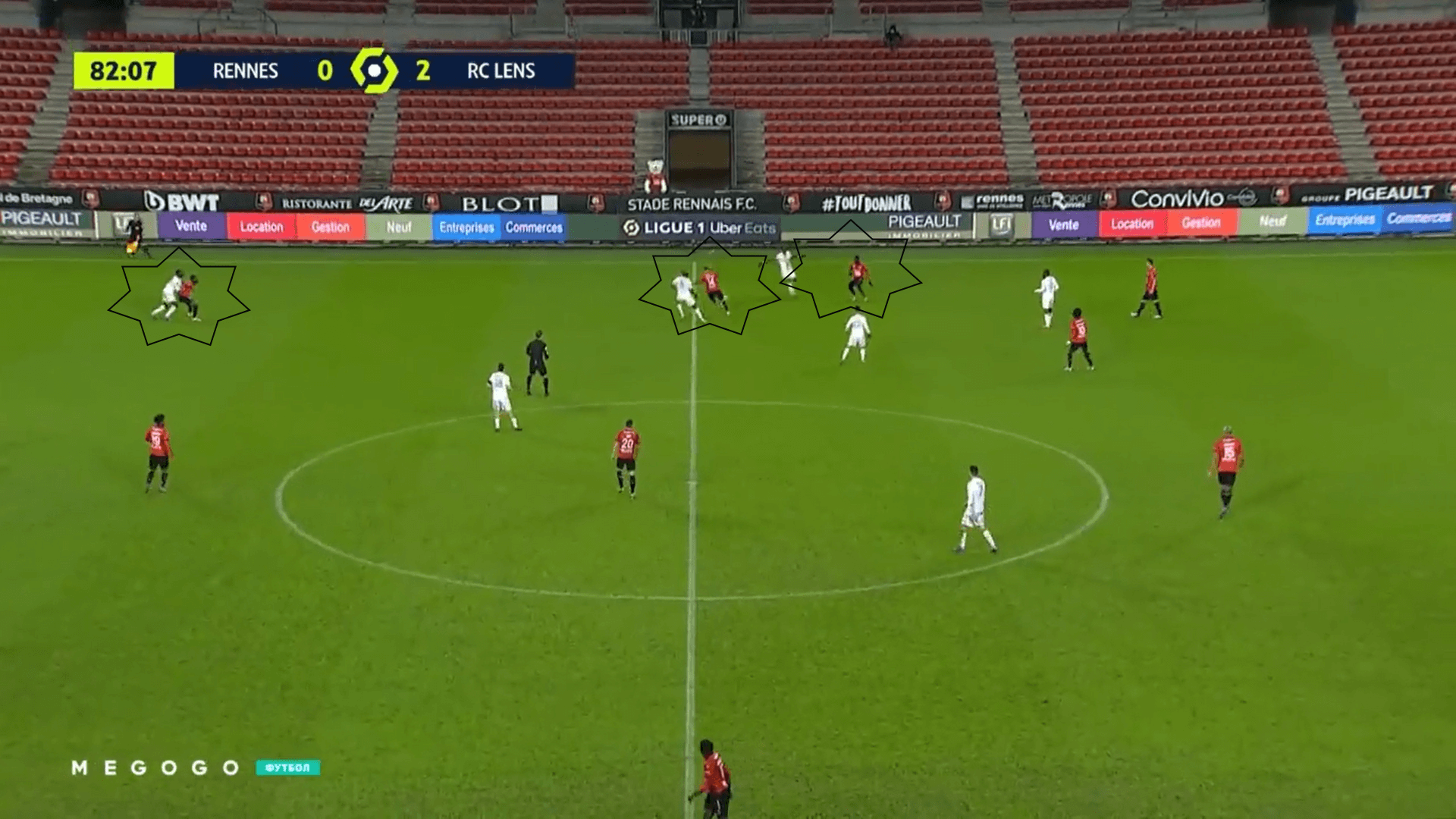 On this right side, they created danger in several ways as they did through balls and had 1vs1 situations, among others.

One disadvantage of this formation is that they have no wingers which makes actions such as pressing harder. However, they did find a way to improve the situation. Connected to this is the danger of them having a 2vs1 inferiority on the wings because if the Rennes winger and full-back attack, the wing-back would be alone against them.

For this, the midfielders would have to continuously shift sides to protect theses 2vs1 situations which after a while became tiring. Sometimes the midfielders did not reach in time to help so a striker had to quickly come down and support, as seen below. 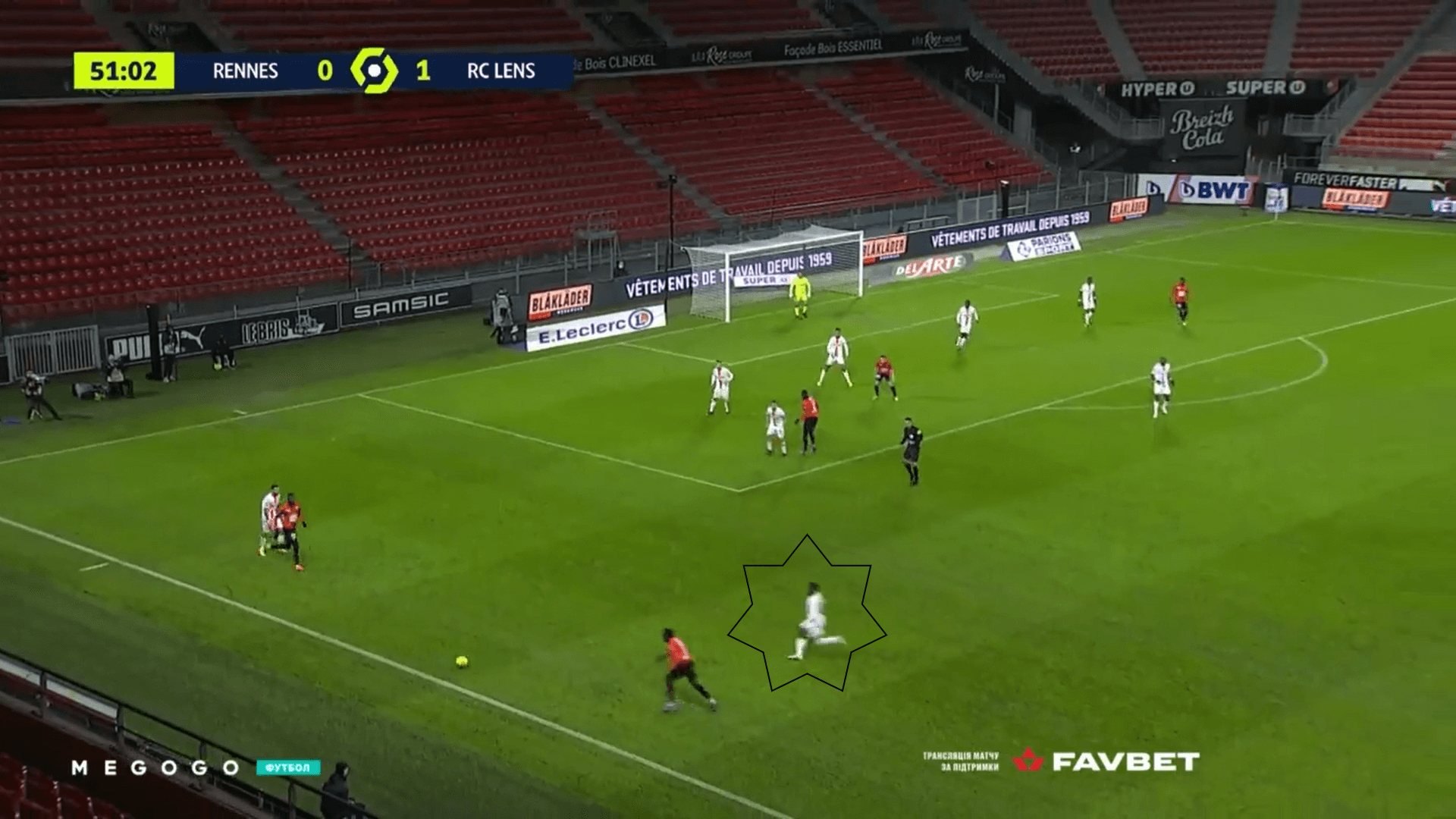 Another disadvantage which Lens only suffered once but could be a danger if not treated well, is the spaces between the wing-backs and the nearest centre-backs. If the opponents manage to get passes in between these lines, it is a threat as it means that the centre-back has to go cover and that the wing-back is too advanced to be able to help.

This happened once in the first half when the space between the wing-back and centre-back was too big. Therefore, the Rennes right-winger came into this space to receive the ball. 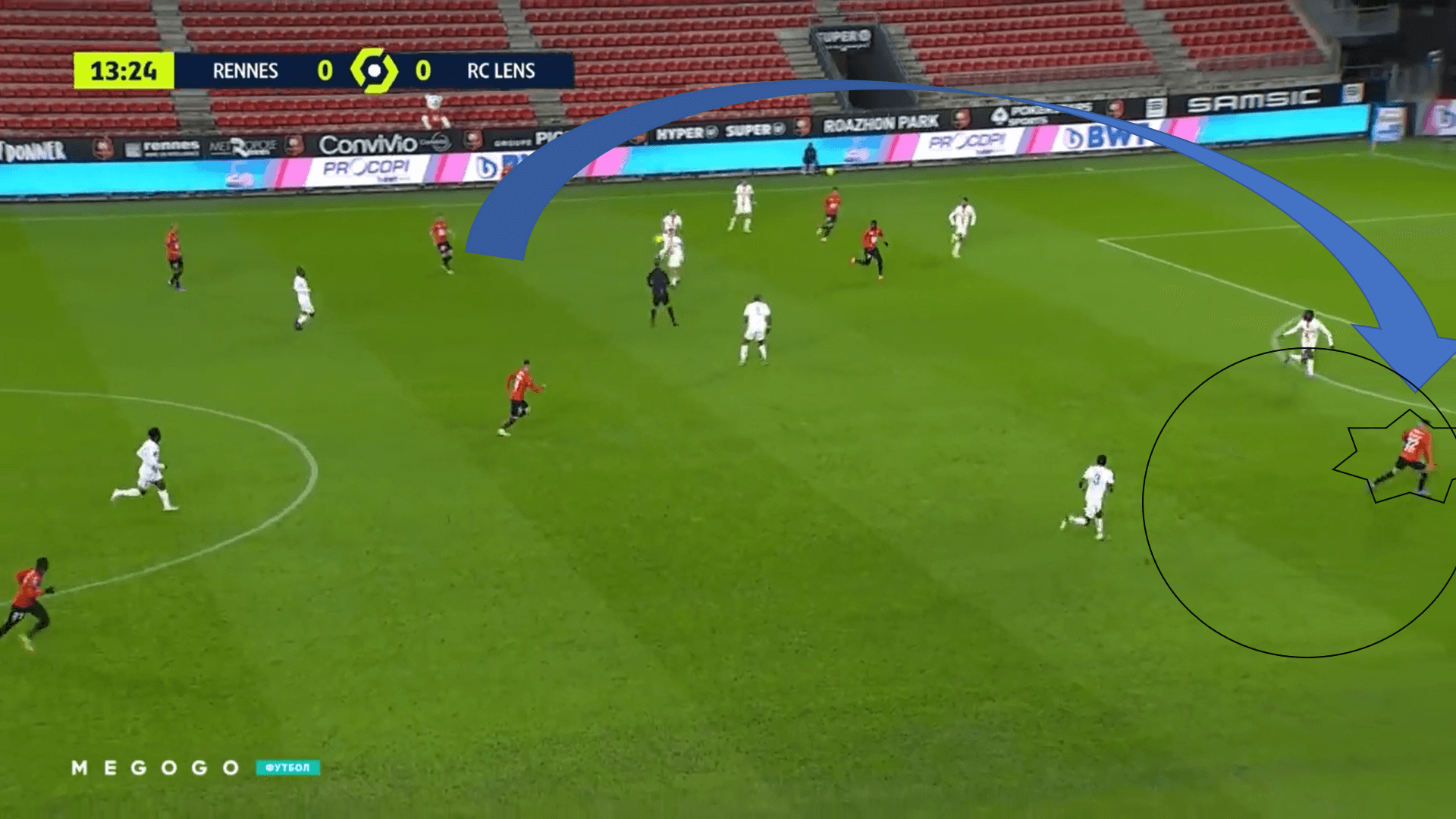 Overall, it was an even game where both teams pressured well and intensely. Lens took longer to fix their tactics and pressure well but when they did, it was effective and resulted in a goal. We saw how Rennes tried to take advantage of the brave Lens centre-backs who are not afraid to come up and also their attacks on the right, but neither was enough for them to score. Also, Lens did well in minimising the disadvantages of their formation and exploited its positive features. Now that Rennes are out of the UEFA Champions League, they need to improve in Ligue 1.