Defending champions Barcelona hosted city rivals Espanyol in Matchday 35 of La Liga at the Camp Nou. After a sluggish re-start, Barcelona finally showed some glimmer of an improved system in a 4-1 win against Villarreal and came in this clash hoping to continue the momentum. Espanyol, on the other hand, have been struggling throughout the season and travelled to Barcelona’s fortress following a loss against Alavés. A loss for Espanyol would see them getting relegated from the Spanish top-flight after 27 years whereas a win against Barcelona would shut Barcelona’s title hope.

At the end of the ninety minutes, the Blaugrana defeated the Blanquiazules with a Luis Suárez goal. In this tactical analysis of the Catalan derby, we’ll be examining the tactics that were used in the game, in addition to how the on-field incidents changed the progression of the game.

Quique Setién made only one change to the side that displayed improved performance against the Yellow Submarines in the weekend. Marc-André Ter Stegen started between the sticks for Barcelona yet again, as the centre-back duo of Gerard Piqué and Clément Lenglet started just ahead of him. The four-man defensive setting was completed with the inclusion of Jordi Alba in at the left and Nelson Semedo at the right. The midfield trio consisted of Sergio Busquets, Sergi Roberto and Ivan Rakitić, who replaced Arturo Vidal to make it in the starting eleven. The front-three remained unchanged, as Lionel Messi-Luis Suárez-Antoine Griezmann glanced to impress yet again. 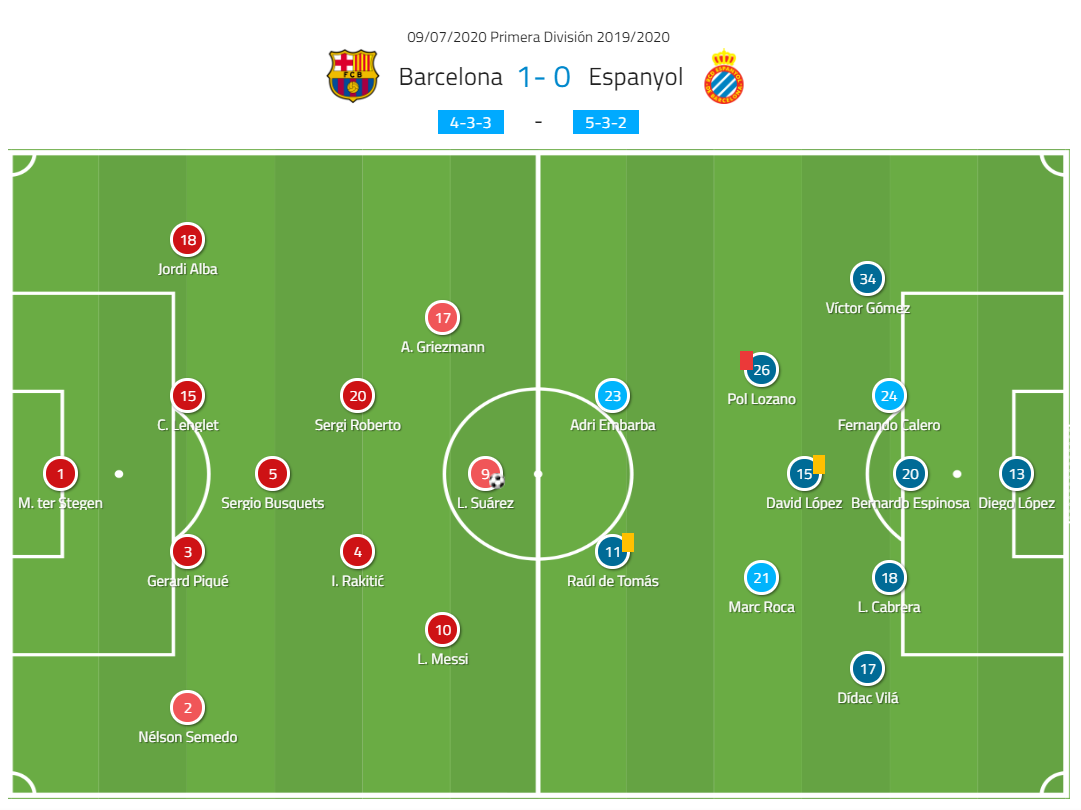 Despite looking like a traditional 4-3-3 on paper, Barcelona had a slightly different shape while approaching the opponent’s area. The shape rather looked like a 4-3-1-2, putting either Messi or Griezmann alternatively in the creating role at the middle. While Suárez was a permanent member of the forward line, Barcelona saw frequent interchanging of the other two attackers, in sync to the build-up play. 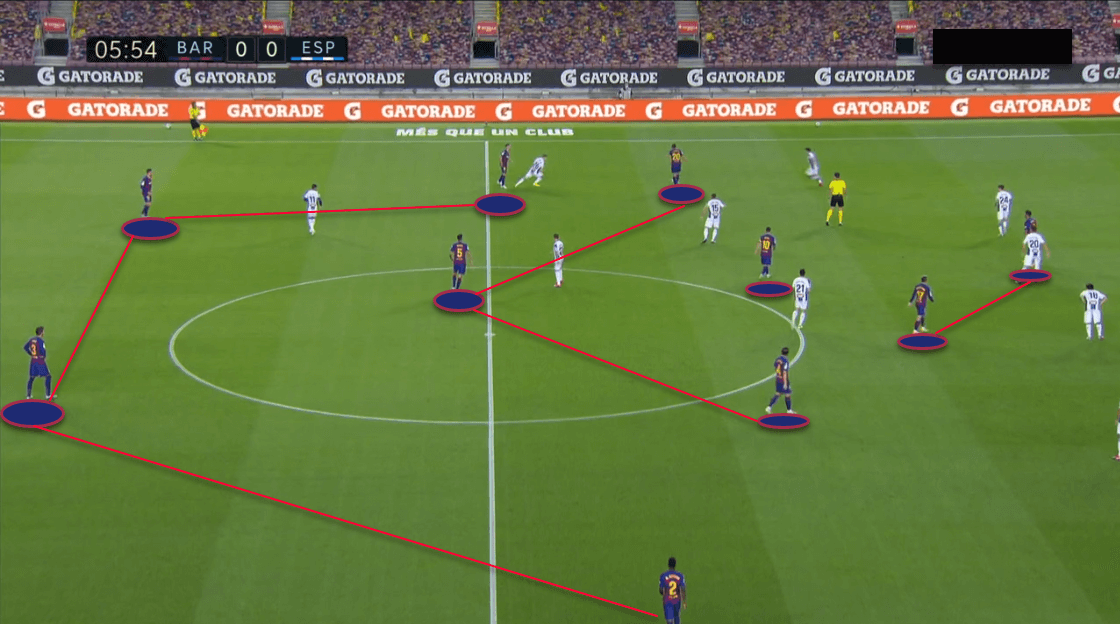 With either one of Messi or Griezmann dropping deep to organize play, Rakitić and Busquets rather adopted a double-pivot role, staying close to each other to possess the ball. One of the main reasons behind the inclusion of an in-form Rakitić instead of Vidal was to organize play and keep the ball, which was achieved as Barcelona enjoyed 71% ball possession. 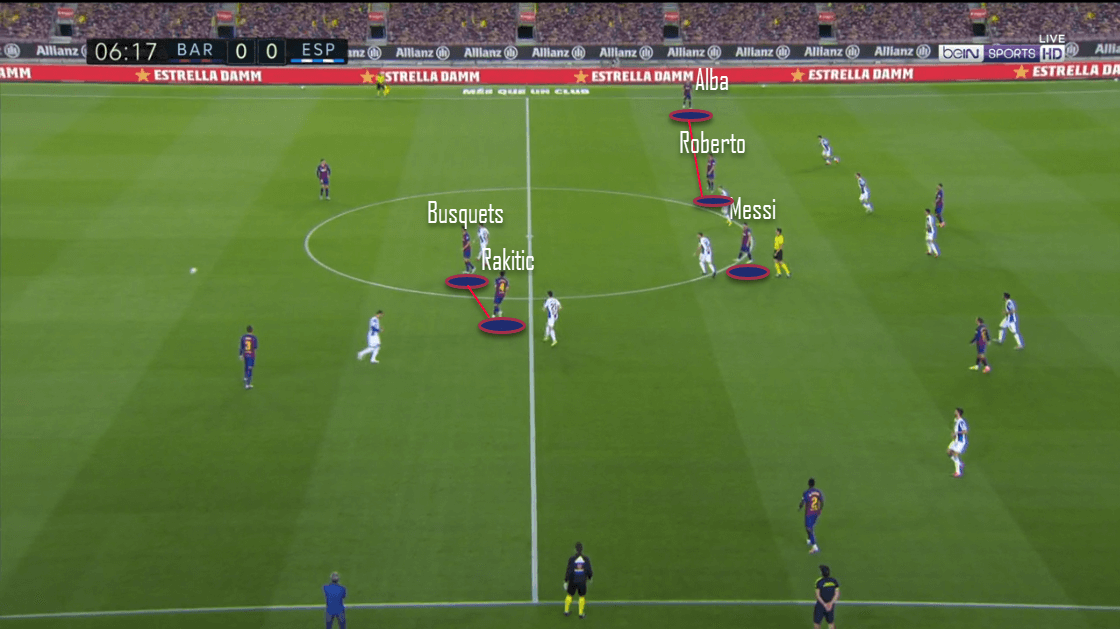 The double-pivot acted well in Barcelona’s favour, as Rakitić was also allowed to make occasional runs forward and also assist in transition and defence. However, Barcelona’s progression and build-up was focused mainly on the left-side of the pitch, utilizing the Roberto-Alba combination. Messi, given his free role in the side, assisted in the build-up from the left as well. However, Messi’s movement and involvement in the left side made the right side comparatively desolated, as Semedo didn’t effectively have a player to interchange passes with.

We can see the effect of left-dominant build-up in the attack map above. Similarly, Barcelona switched to a right-side approach after they were restricted to ten-men in the second half. Despite that, the majority of Barcelona’s productive attacks and moves came off the left flank in ultimately.

Similarly, another key characteristic that Barcelona’s tactics contained was the positioning of Griezmann and Messi relative to each other. Barcelona struggled to penetrate centrally in the initial games after the restart and were overcrowded when attempting to penetrate centrally. As a potential solution to this problem, Setién always made sure Messi and Griezmann played in different vertical spaces during the build-up, to encourage free-movements and individual creativity. As a result, Messi and Griezmann alternatively went forward or dropped down to balance things out. 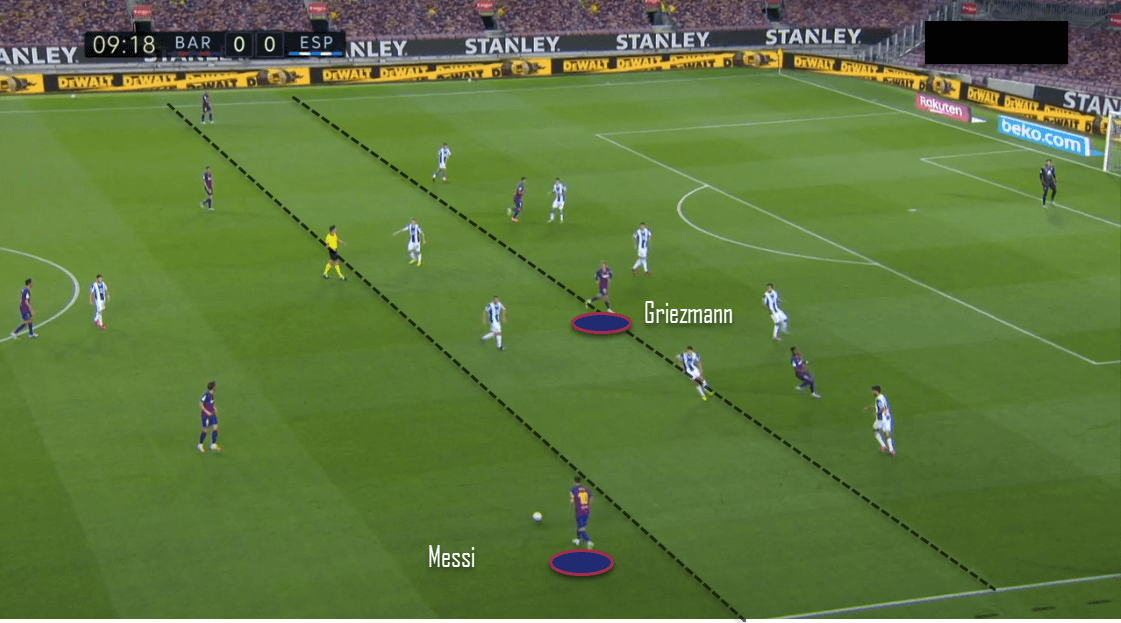 Like we can see in the above instance, Messi is deeper as compared to Griezmann (one of the purposes of 4-3-1-2 shape on possession). As a result, Messi was able to provide line-breaking through-balls to the advanced run-making players (Suárez and Griezmann) as well as combine midfielders by playing between the opposition lines.

Changing their regular 4-4-2 approach to 5-3-2 coming in to face Barcelona, Espanyol were quite clear with their intentions – they were ready to expose Barcelona’s inability to beat an organized and crowded low-block. Espanyol let Barcelona have the ball and defended in numbers, making the Blaugrana to find alternative ways to overcome the narrow and compact block. Throughout the first half, Barcelona played straight into what Espanyol wanted, Barcelona were not able to create effective chances despite having room to build-up and play with the ball in midfield. 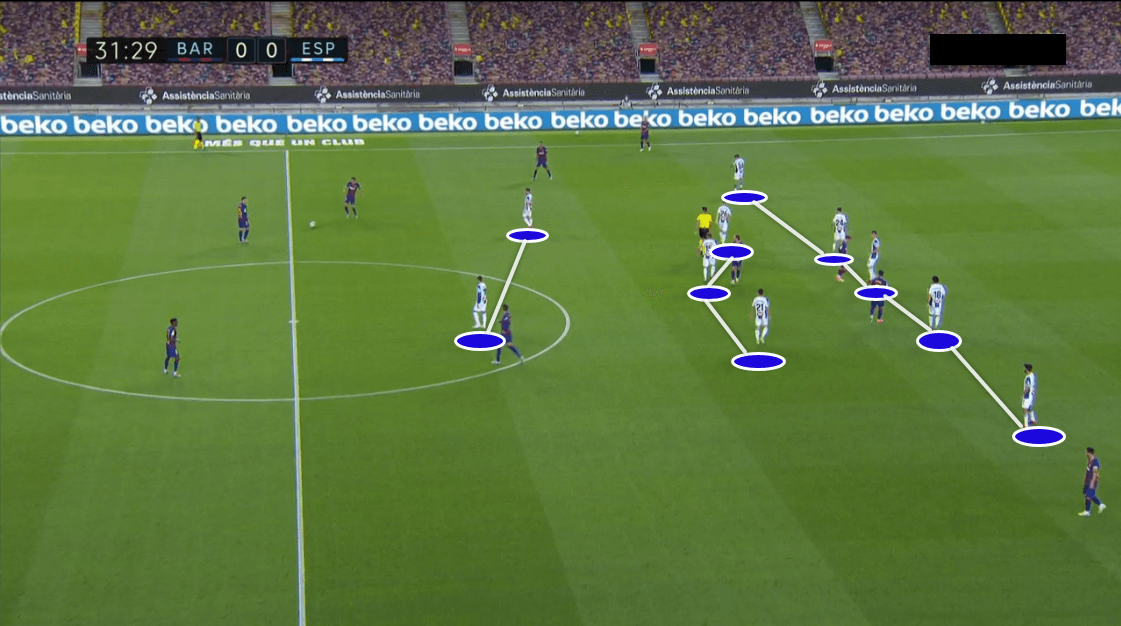 Espanyol deployed a moderate pressing approach higher up the pitch, with the front duo only going for balls occasionally. However, the later blocks of three and five were the main channels to limit Barcelona and win back balls. Similarly, the rigid structure meant Espanyol were able to limit Barcelona’s presence inside the box. The two lines were key in supplying the ball upfront, to the two target men up-front who were always up and ready to catch Barcelona’s defence. 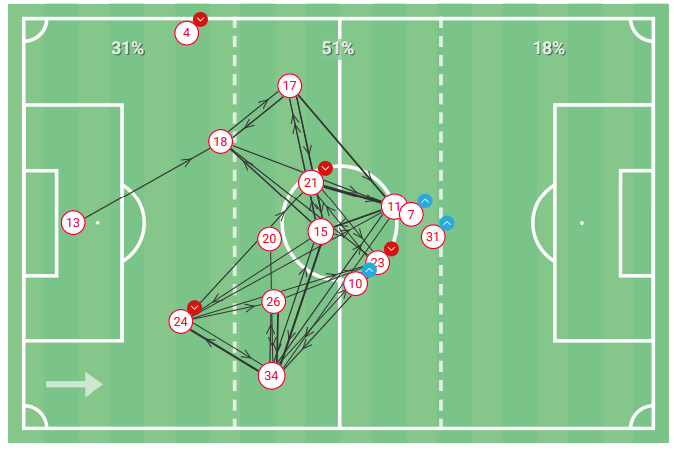 Espanyol’s transition was rather direct like the pass map shows passes from wide areas concentrating on the target men upfront. Espanyol’s average pass length was 22.3 m compared to Barcelona’s 16.7 m, clearly giving us the glimpse of their direct switch of play with long passes to turn a defence into an attack. Similarly, Espanyol were able to use this advantage to get their full-backs upfront to support the two forwards. 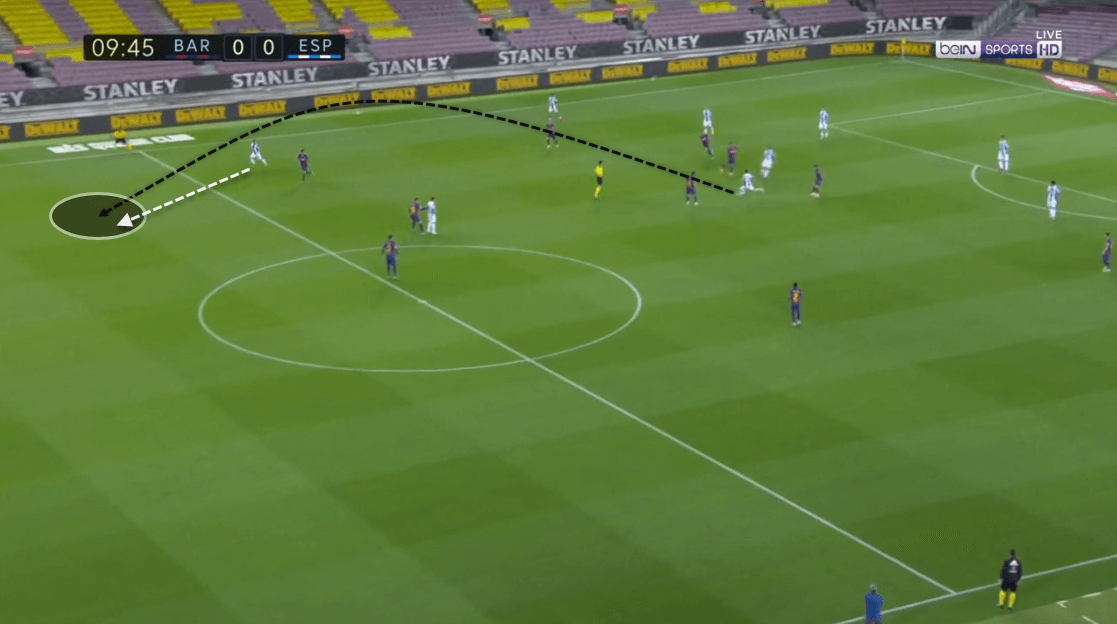 In the instance above, Espanyol recover the ball and instantly trigger the run, catching the advanced Barcelona defence behind. This run ends with a shot blocked by the Barcelona keeper. This approach of transition was supported by the use of wide players to switch play to the spacious side as well. The use of long passes to get close to the opposition goal, rather than working the ball, made Espanyol register an equal number shots as compared to Barcelona despite being less dominant in play. 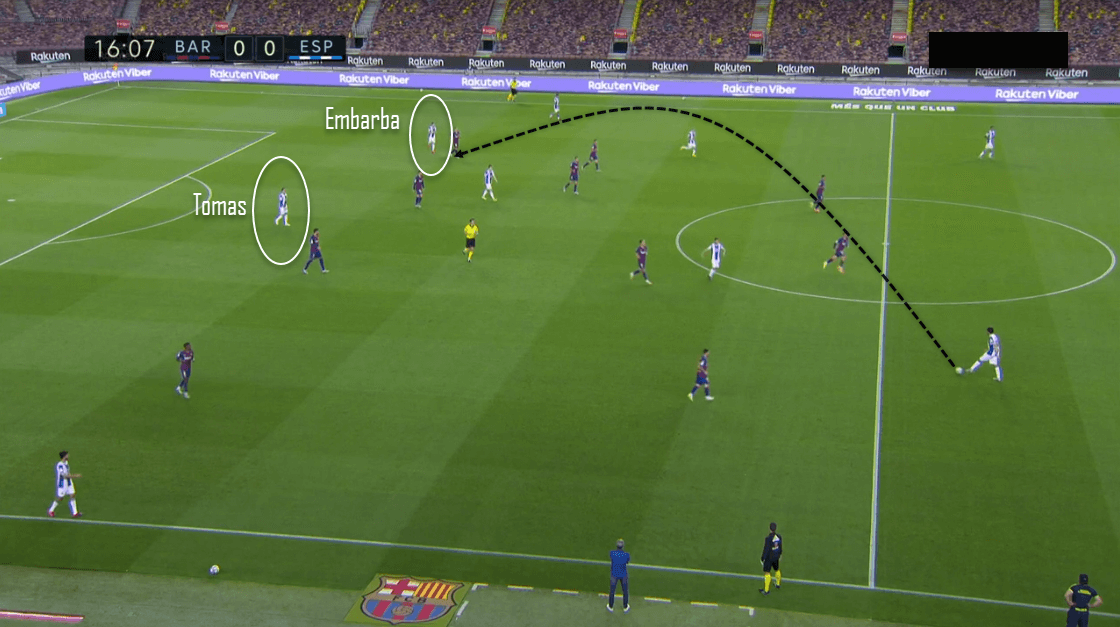 Like mentioned above, the front two’s involvement in defence was sparse because of their use as target men. In this instance as well, Espanyol try to get the ball directly above the Barcelona block, instead of trying to penetrate via passing routes. Also, full-backs positioning themselves to support Tomas and Embarba is visible here. 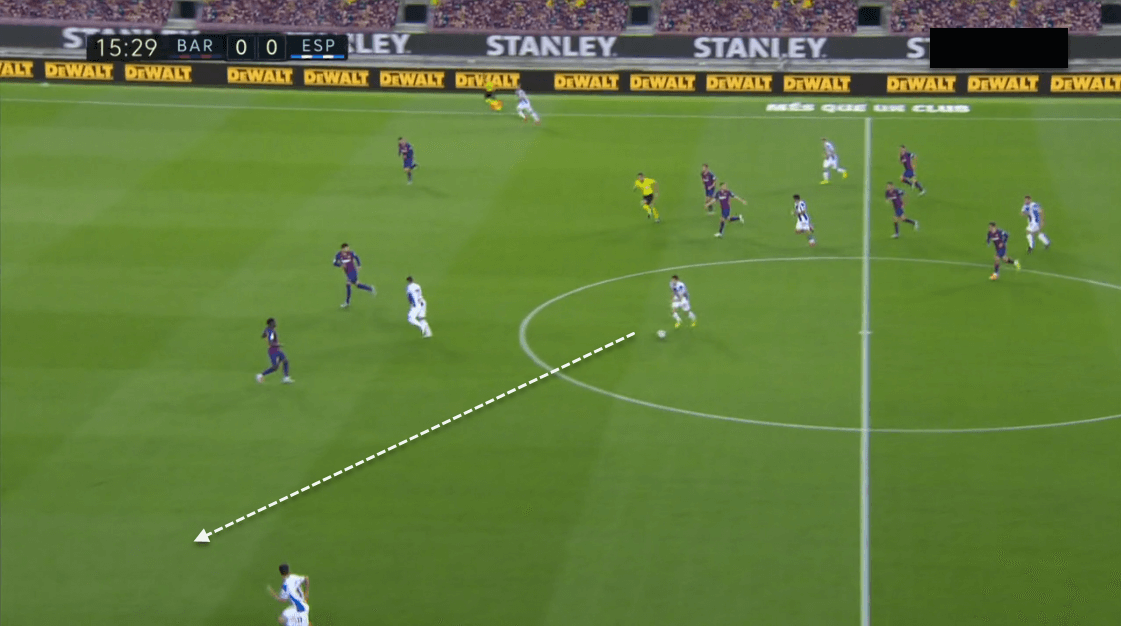 Whenever Espanyol won the ball in the middle, they looked to quickly proceed via wide areas of the pitch where vacant spaces are available due to Barcelona’s offensive movements. This approach too was centred towards getting one of the two forwards to have a shot on goal. These moves resulted in crosses directed towards one of the two-run making forwards upfront.

The adaptations and Barcelona’s decisive move

After just four minutes of coming in the game, Barcelona’s Ansu Fati was sent-off, followed by Pol Lozano’s sending off two minutes later. With ten-men each, the teams made tactical and structural adaptations to play with ten outfield players.

Espanyol continued their emphasis on defence, as they maintained the rigid five-man setup despite being restricted to ten-men. The approach on goal was similar as well, the lone forward was targeted by each one of the recoveries that Espanyol made in the second half. The loss of one midfielder was compensated by one of the forwards dropping in midfield to complete the three-man middle layer. 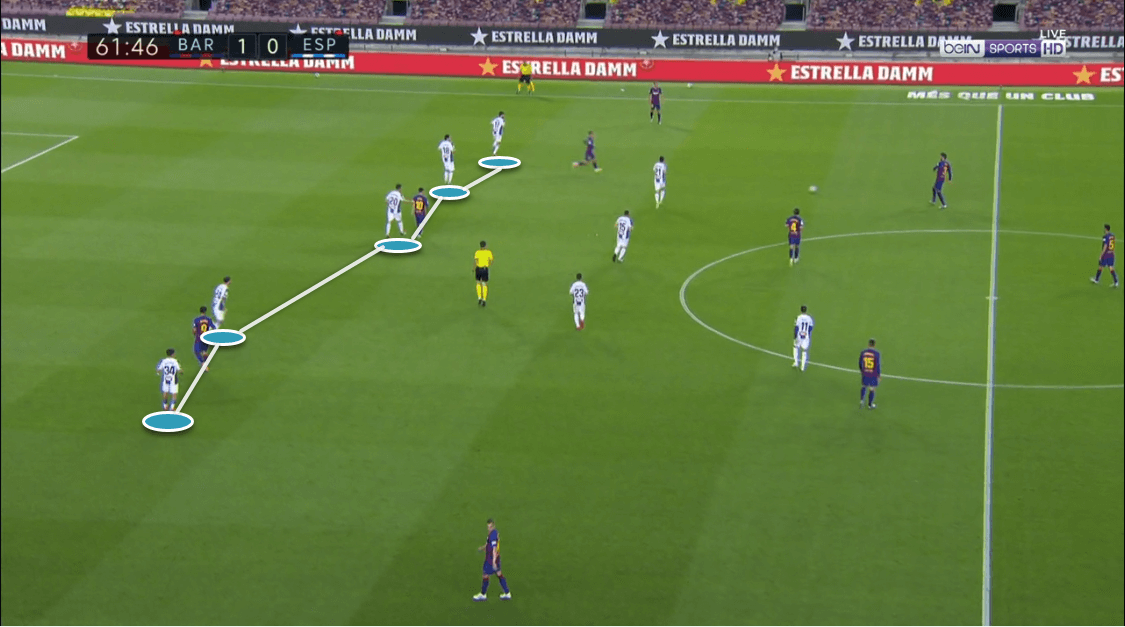 Raúl de Tomás acted as the target man now and was almost assisted by Embarba as Espanyol tried to equalize in the dying minutes of the match to avoid immediate relegation. Similarly, Espanyol seemed to penetrate from the left, as Barcelona were left its players upfront in the build-up. With offensive substitutions, Espanyol tried to equalize till the end, but could not break Barcelona’s resilience.

On the other side of the pitch, after Ansu Fati was sent off, Barcelona switched to a 4-3-2 structure. Antoine Griezmann was given the duties to operate from left side with Jordi Alba, as Messi was given a role that was concentrated towards the right side of the pitch. 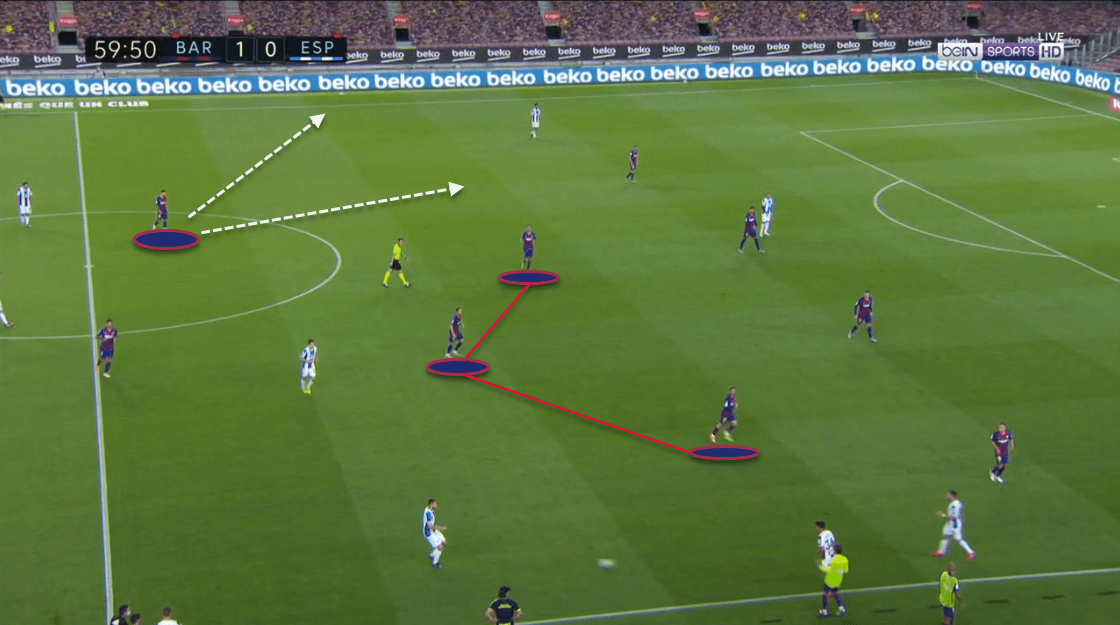 As we can see in the picture, Griezmann is dropping to a rather deep and left midfield spot, aligned with Jordi Alba. Similarly, Messi’s switch to the right was not limiting, as he still had the freedom to drift wide to let Roberto make a run into the half space, or fill the void to become a right-midfielder at times.

Messi’s involvement in the right made Espanyol defend with numbers towards the right. As a result, the left side was left with space to play ahead, which was capitalized by Barcelona to score the only goal of the match. 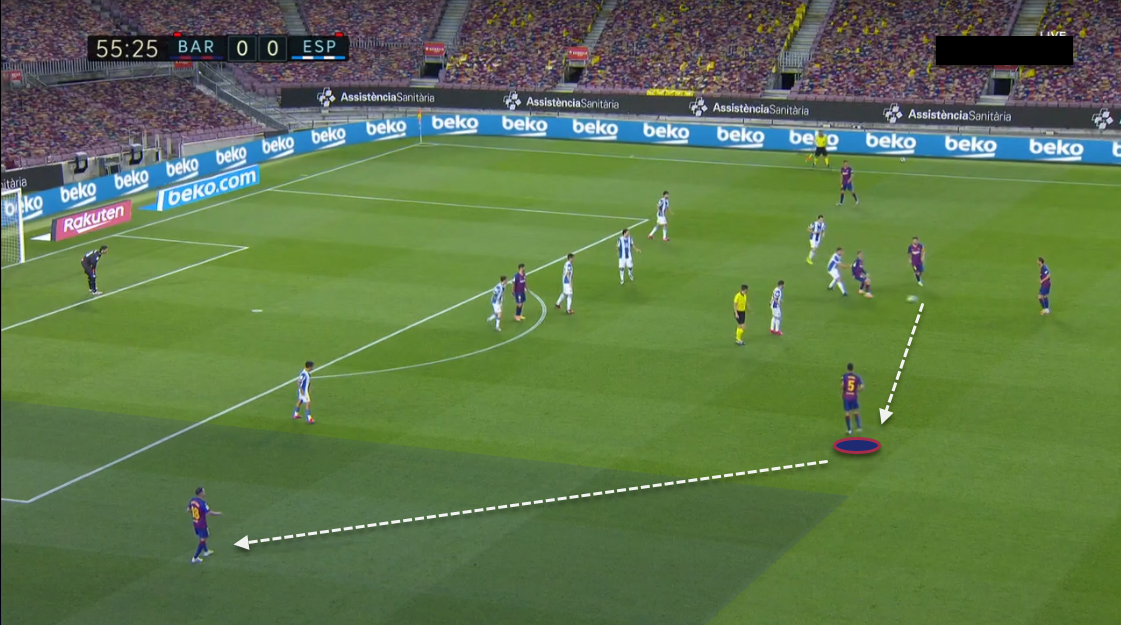 In the initial movements that resulted in the goal, we can see Jordi Alba enjoying plenty of space towards the left side of the pitch. While the ball is on play towards the right, the ball is played to Busquets, who is in a rather central position and in a position to supply the ball towards Alba to allow him to use the space comfortably. Ultimately, Busquets is able to execute the pass towards Alba. 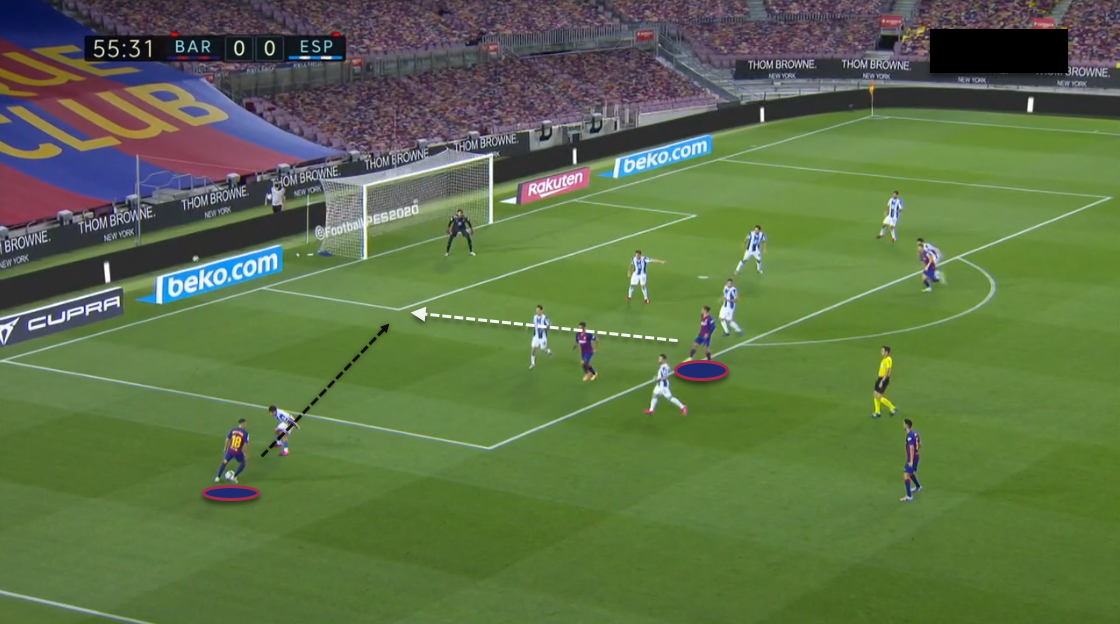 As Alba receives the ball, he advances forward briefly, triggering a run inside the box for Griezmann. As Griezmann makes the run inside the box, Alba beats his only marker to pass the ball to Griezmann and the ball is already put into a dangerous situation. Similarly, at the right side, Messi too makes a run towards the direction of play, which makes Barcelona stronger with all three attackers in front and close to the goal. 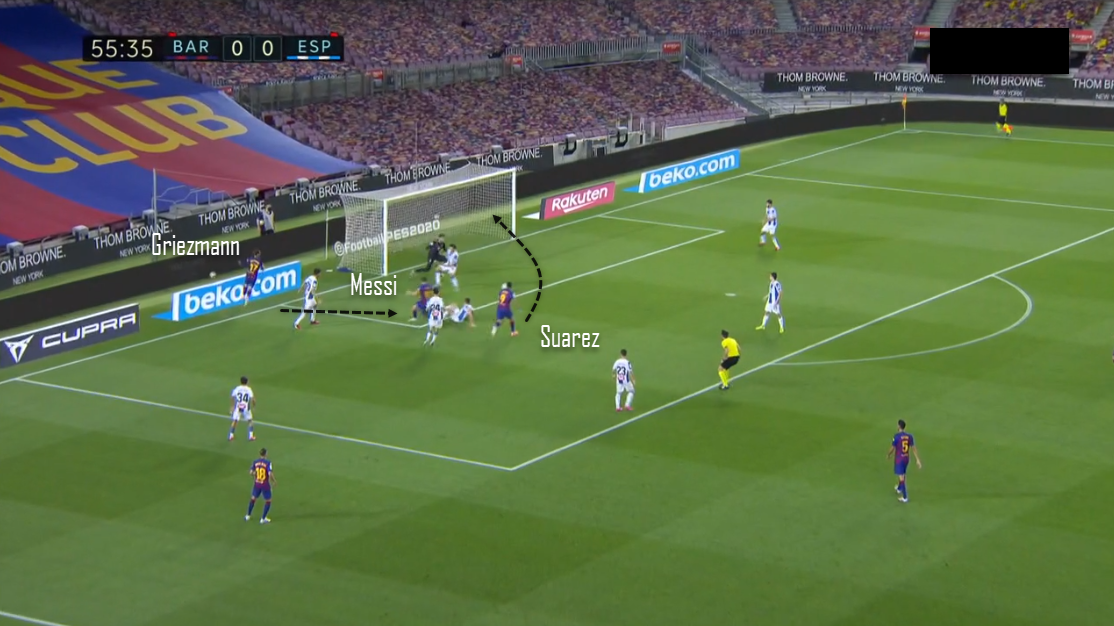 As Alba executes his pass to Griezmann, the Frenchman combines with Messi with a backheel to allow the Argentinian to have a shot on goal. The shot is blocked by Lopez and Suarez, making a run towards the left side of the pitch lashes it onto the net to give Barcelona the lead. Barcelona’s attempts of playing from the left was ultimately made productive by an effective front-three combination yet again.

Espanyol are relegated from La Liga, after a disastrous season. On the other hand, Barcelona, after struggling to find a rhythm are getting decisive goals and are beginning to pull something out of matches. Although the fate of the league lies in Real Madrid’s slip now, Barcelona have done all they can in this fixture and grabbed all three points available.

As this analysis talked about, Barcelona still have a number of issues to be addressed. Although Setién will take this as a tactical win over the city rivals, he still has an array of issues to address before Barcelona go into the next season confident and effective.