After a hectic draw at Ramon Sanchez-Pizjuan, FC Barcelona welcomed Athletic Bilbao at the Camp Nou to keep their La Liga title hope alive. Athletic Bilbao came into the clash following a 1-0 win against Real Betis at ‎San Mamés. With Real Madrid back to the winning ways, Barcelona had immense pressure upon their shoulders to grab all three points at their own backyard.

FC Barcelona did manage to edge past the tenth-placed Los Leones with a 1-0 margin at the end of the ninety minutes. Ivan Rakitic scored the winner at the 71st minute with a Lionel Messi assist. In this tactical analysis, we’re going to look at how the teams lined up, the tactics that both Barcelona and Athletic Bilbao adopted – the attacking styles, the pressing mentality and the defensive attributes of both the sides.

Gaizka Garitano made six changes to the side that faced Real Betis on Saturday. The side started off with a 5-3-2, with 22-year-old Unai Simón on goal. Iñigo Lekue and Mikel Balenziaga started as the wide defenders as the three central defenders included Óscar de Marcos, Unai Núñez, and Yeray Álvarez. The three-man midfield consisted of Iñigo Córdoba, Mikel Vesga, and Unai López. Similarly, Iñaki Williams and twenty-year old Oihan Sancet were the two men upfront.

FC Barcelona, from the start, tried to make their attacking transitions as fluid as possible. When in possession, the Barcelona full-backs were allowed to push forward, hence allowing the side to create overload in the higher areas. Hence, Barcelona’s attempts of playing higher were visible, with the team aiming to penetrate Bilbao’s narrow block early.

As we can see, while in possession, two midfielders (Busquets and Arthur) were playing deep, to create a link between the defence and attack. This meant Barcelona were able to get the ball from the defence to the forward players often in the early period of the match. Similarly, this approach allowed them to make a quicker transition and counter-press higher up the pitch, which is why they relatively seemed better than the Sevilla clash. 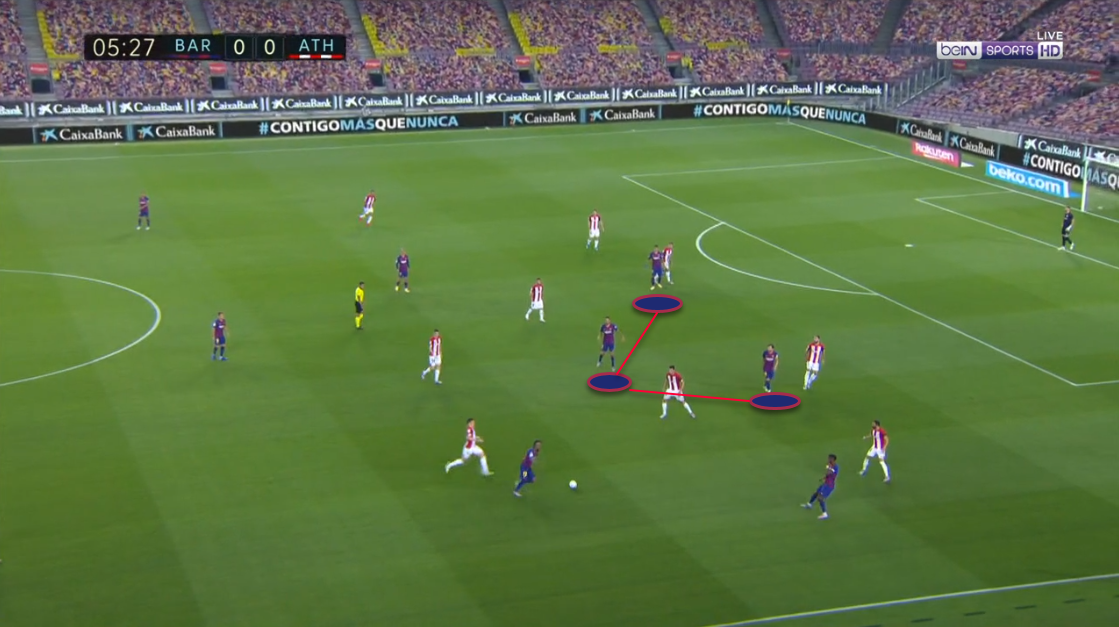 Unlike the previous matches after the re-start, Lionel Messi played a more central role. This was made easier by the fact that Nelson Semedo was occupying the right side higher up the match throughout the match. Barcelona clearly looked to take advantage of Messi’s individual attributes and his link-up abilities with Suarez. This made Barcelona more central and throughout the match, made them predictable to Bilbao defence as well. 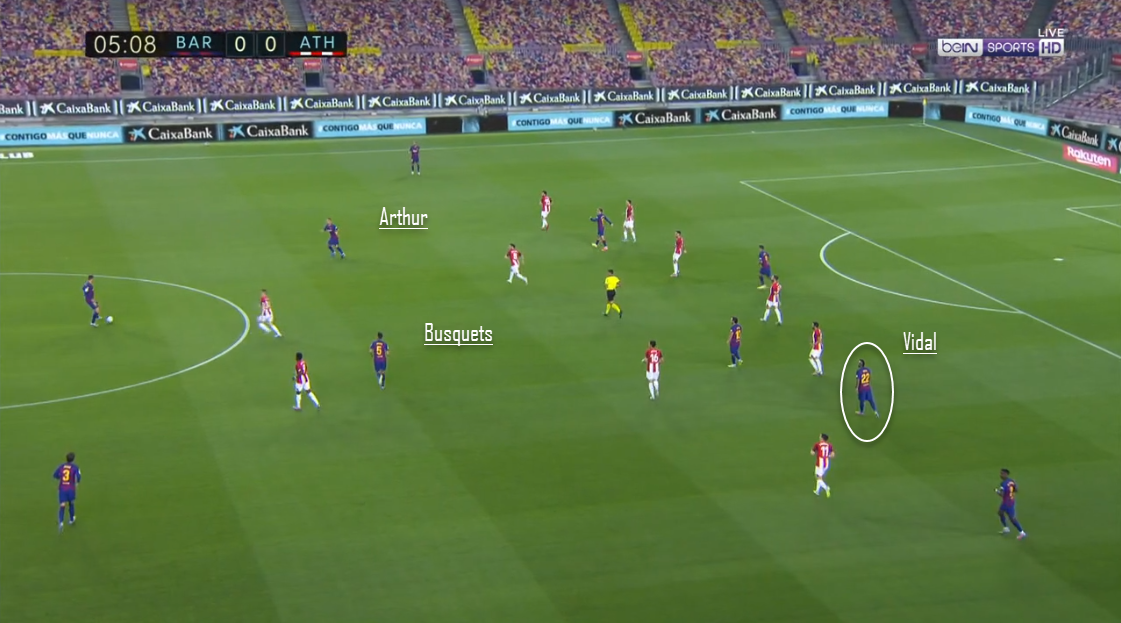 It has been a regular sight of seeing Arturo Vidal play as a typical attacker whenever he starts. Vidal was seen making runs forward and positioning himself towards the inside-right, aligned with Semedo. This allowed Messi to drop deep and occasionally swap position with Vidal to create. This increased Messi’s freedom to drop and create, whereas increased the overhaul in the higher areas of the pitch. 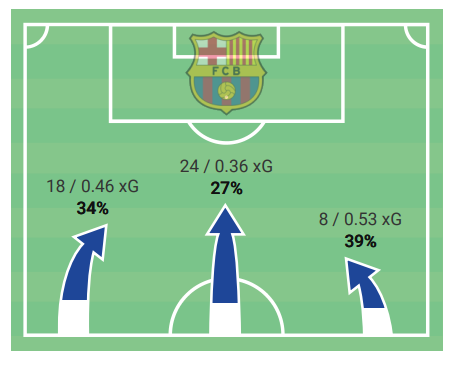 This directly influenced Barcelona’s attacking directions, as 24 of their total attacks were centred, which totals to almost fifty per cent of their total attacks. However, this made the Barcelona side redundant and predictable and their moves fell into the hands of Bilbao defence on each occasion. Despite attacking more from the centre, their xG from central attacks was lower than the attacks from the other two sides, clearly displaying the ineffectiveness. 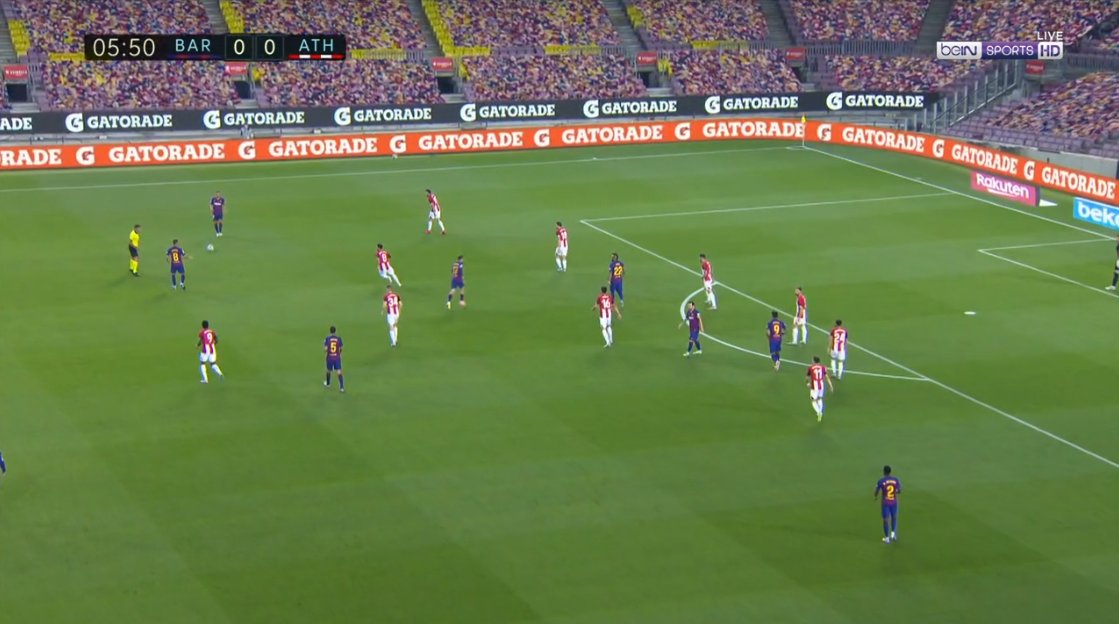 As we can see above, Barcelona attackers are present in the central area, with the likes of Vidal joining in too. This overload is successfully covered by the Bilbao defence, hence disconnecting the Barcelona side from where the ball is. We’ll talk about this in detail as the analysis progresses. 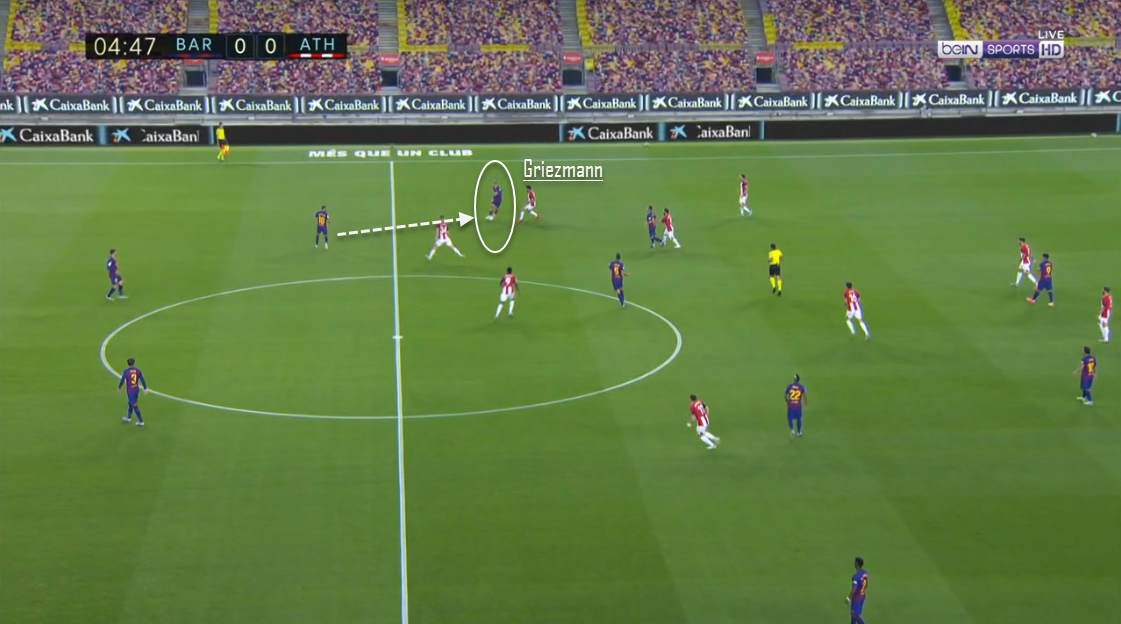 Similarly, towards the left side of the attack, Antoine Griezmann was seen dropping deep, to link-up and create progressing channels. Since Semedo was assigned to cover Messi’s void, Alba has to limit his forward movements and contribute to the defensive duties. This made Griezmann’s work necessary, to progress the ball forward from left. However, Barcelona’s approach of cutting in and trying to penetrate via central route meant that Griezmann eventually ended up as an inside forward when the ball got up to the advanced position. This prevented Alba’s overlapping runs as well. All in all, Barcelona had to rely on some youth inspiration to break Athletic’s central and narrow defending.

After failing to penetrate past the Seville defence, Barcelona came up with a central approach, which was well picked up by the Bilbao defence. However, the Catalans were able to get the winning goals and dominate the match with a few tactical tweaks that came along with the substitutions in the second half.

After Setién fielded Riqui Puig, Rakitic and Ansu Fati in the second half, Barcelona were able to get past the Bilbao block frequently and effectively.

As the xG dynamics suggests, there is a sudden surge in Barcelona’s xG after the 50th minute and a goal on the process. This was made possible by the substitutions mentioned, let’s examine how Barcelona achieved this tactically.

First things first, Juventus-linked Arthur Melo was not in top of his game throughout his spell and was replaced by Puig. The La Masia graduate instantly made his presence felt, as he won the ball and constructed attack from the middle of the pitch frequently. 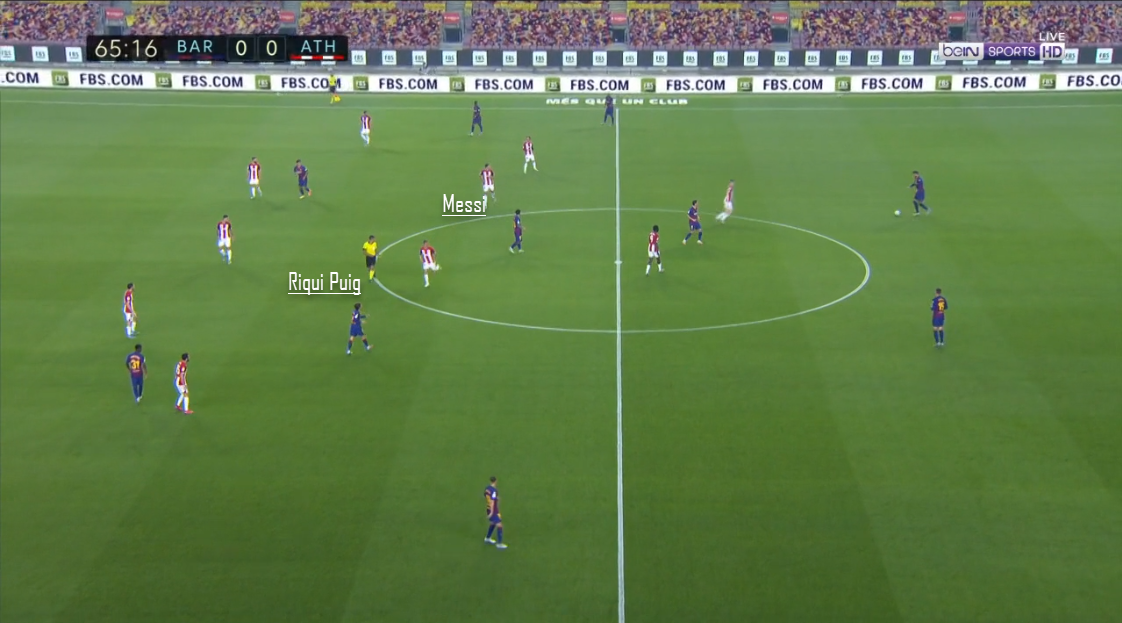 As seen in the instance above, Puig positioned himself in the heart of the midfield, which made him and Messi the creators in the middle of the pitch. In the first half, this was the main problem in Barcelona’s midfield, as the Busquests-Arthur duo served as a pivot and Vidal always was in an advanced position. Thus, Puig here acted as the one that flows the ball through the midfield. Similarly, Rakitic’s inclusion was a plus here, as the Croatian was able to use his fresh legs to handle the transition ad support the defence by himself. 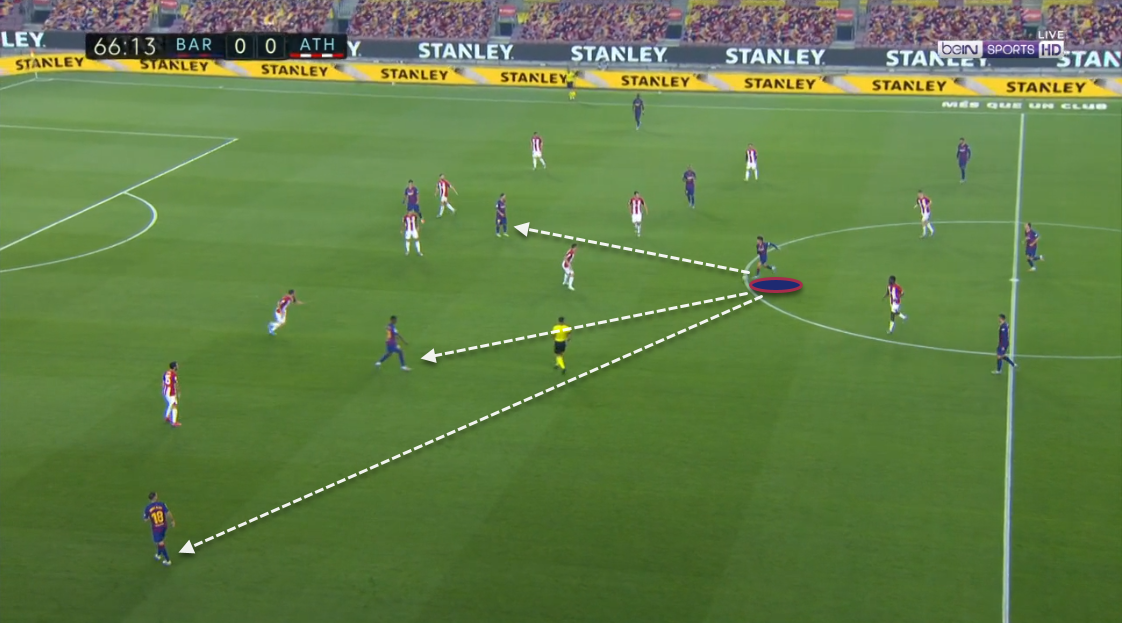 Similarly, by placing himself between the two opposition pressing lines, Puig was also able to distribute play and provide Barcelona with width. This is where Ansu Fati was used, as he used the left space to stretch the Bilbao defence unlike Griezmann, who struggled to link-up in the final third. Thus, as a result of their intense attacking moves after effective substitutions, Barcelona avoided another draw and kept track of league leaders Real Madrid.

Bilbao adopted a direct and vertical approach while building up and creating attacks. Unai Simón and the central defenders often looked for spaces while creating moves, throwing in long balls to surpass Barcelona’s pressing lines. Bilbao mostly tried to advance through the flanks, then get the ball in the middle and eventually, trigger Williams to get to the post. Bilbao’s style of long passing was also influenced by Barcelona’s high counter-pressing and trying to catch them from the middle. 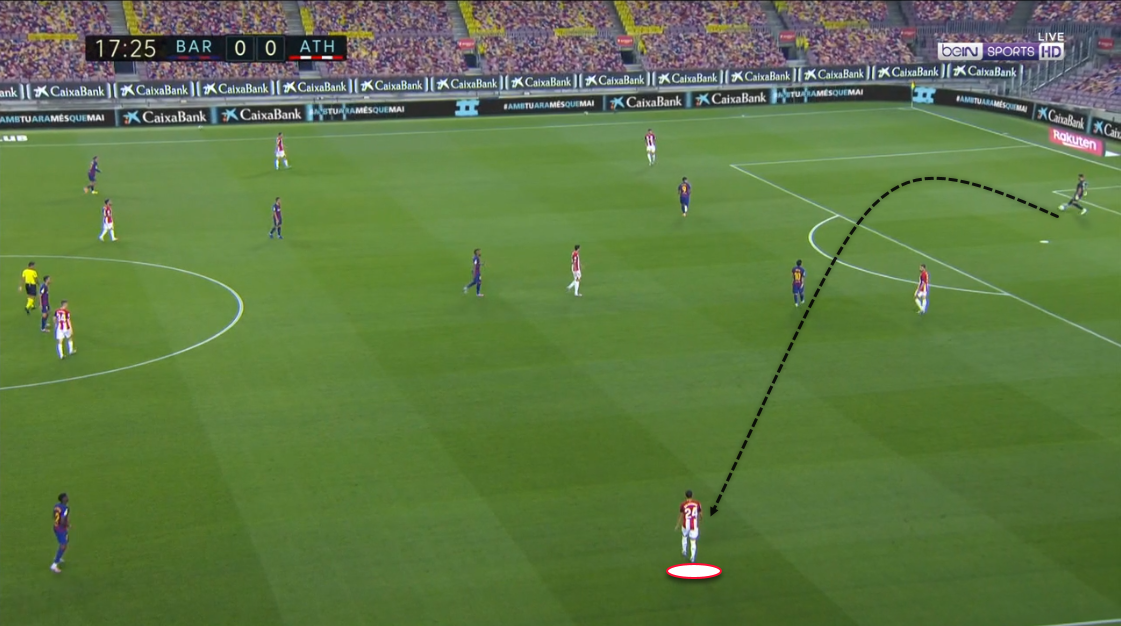 As seen in the given instance, the goalkeeper looks out for the player in space at the left side. This increases Bilbao’s chances of retaining and progressing the ball, as well as allows the player to seek out options towards the middle to progress. Bilbao typically used players present in the halfspaces to transition from the wider areas to more advanced areas. 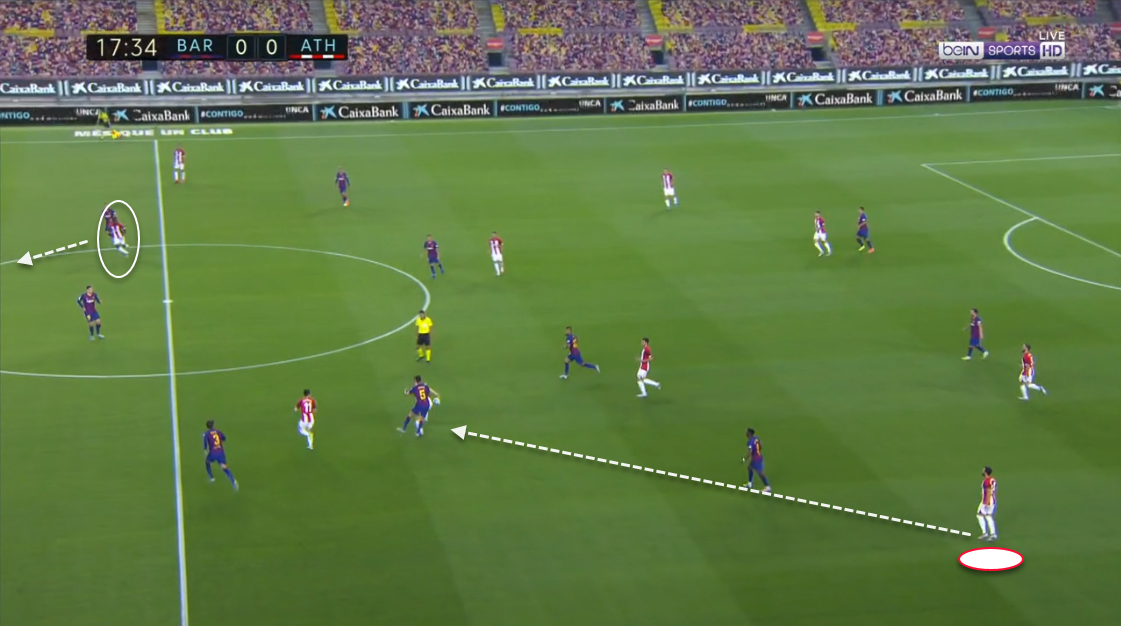 The wide player, who receives the ball from the keeper, then uses the player nearer to him to go more central. The use of half-space in this regard, to transition and move ahead was crucial for Bilbao. They also used this to stretch the press and create spaces. Similarly, in this instance, Williams is the target man, as he is able to make runs and the player with the ball is also in a position to able to make a pass to him. This was a tactical method used by Garitano to advance the ball and attack.

Similarly, higher up the pitch, Athletic Bilbao occasionally used wide players to stretch Barcelona defence. Since Barcelona liked to stay compact when on the ball, Bilbao tried to counter and make their transition difficult by spreading the play wide and trying to create spaces. 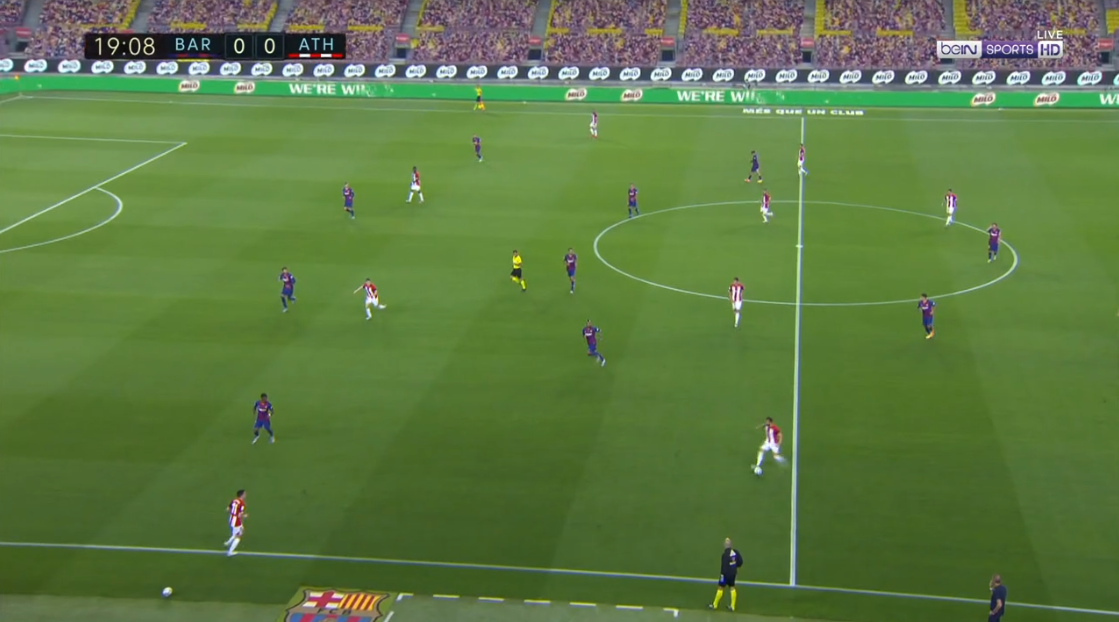 The above instance shows Bilbao’s full-backs in an advance wide position, trying to create a passing lane as well as an overhaul in the Barcelona half. This allows Bilbao to create space, as well as retain possession. However, this method on several occasions backfired as Barcelona were able to win the ball frequently and progress through the centre. 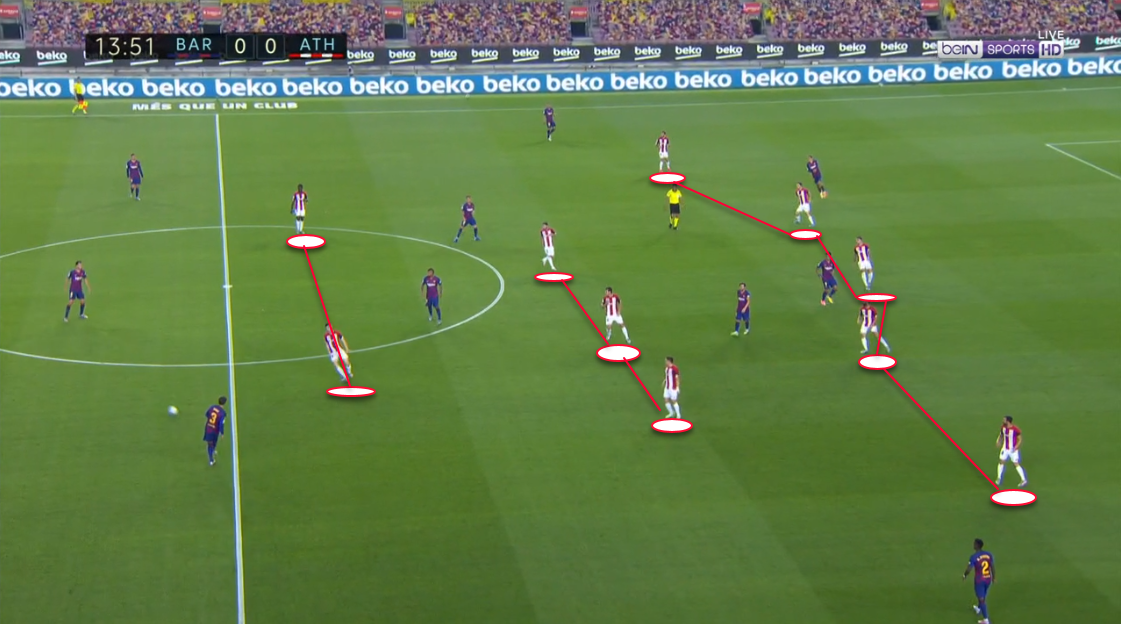 Bilbao’s five-man defence also worked properly to trap the Barcelona players inside a narrow central block when Barcelona were in the advanced areas of the pitch. By defending in numbers and slowing down the attack by limiting the passing area, Bilbao were often successful in winning the ball back while defending deep in their own area. Despite conceding more shots, Bilbao were impressive in containing the star-studded Barcelona attack effectively until the Blaugrana exploded to enhance their game in the second half. 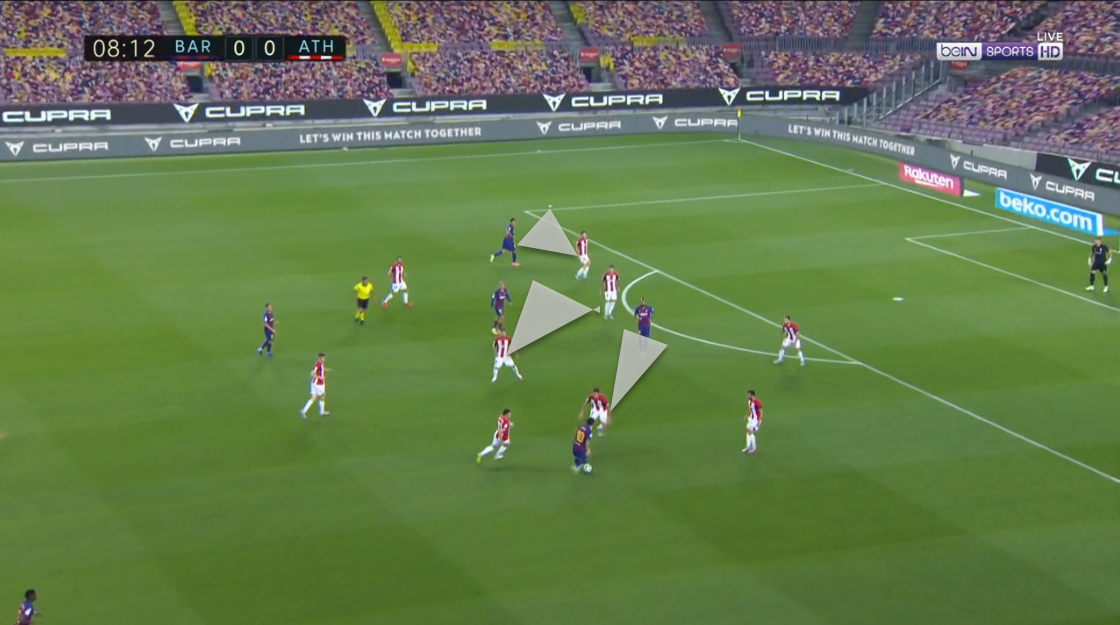 As we can see annotated in the picture, Bilbao’s defensive synchronization was not only about the player presence, but smart positioning and movements. Although Barcelona players are crowded and look to be creating channels to circulate the ball, defenders are seen placing themselves in such a way that their body angles block the passing network towards the dangerous areas. Although Messi looks to create danger in this instance, he’s covered by 3 Bilbao defenders as well as his advanced passing options are well covered by the Bilbao player’s shadows. Hence, the attack now depends on Messi’s own skills or he has to search for another option to arrive. This approach slowed Barcelona’s attacks down throughout the match.

Although Barcelona improved and looked sharper than the away trip to Sevilla, Bilbao were able to pinpoint their predictable approach and counter the tactics. However, effective substitutions and Barcelona’s attempt to win the ball back high and break quick certainly created problems for Bilbao.

Barcelona will now look to solve their final third issues and as this tactical analysis pointed out, will often look towards Puig to answer their questions.