Chelsea Women have won 3-1 over Manchester City Women last Sunday at Kingsmeadow. Following this result, Chelsea are now holding the third spot behind Arsenal and Everton with 10 points, while Manchester City are fifth with seven points.

Most parts of the match were dominated by Chelsea since their players were more aggressive on the ball and won the larger part of duels. And although Manchester City made their best to equalise, they were only able to score one goal and failed to stop Chelsea’s fluid attacking build-up and more importantly they were not able to find solutions to their continuous high pressing.

This tactical analysis article in the form of a scout report will study both teams’ tactics throughout the game while spotting the tactical mistakes and coaches’ attacking and defensive plans as well as providing an analysis of the best performing players from each side.

The locals, Chelsea, were lined up according to a 4-4-2 formation which becomes 4-4-1-1 at times when Pernille Harder plays behind Sam Kerr. The midfield line was composed of Fran Kirby on the right-wing, both Ji So-Yeon and Melanie Leupolz as central midfielders while Erin Cuthbert as a left-winger. For the defence, Emma Hayes did not make changes in this part and played Maren Mjelde as a right-back, Millie Bright and Magdalena Eriksson as centre-backs, Jonna Andersson on the left flank and Ann-Katrin Berger as a goalkeeper.

Gareth Taylor chose to start this game with a 4-3-3 formation with Ellie Roebuck as a goalkeeper behind Gemma Bonner and Steph Houghton as centre-backs, while Lucy Bronze played as a right-back and Demi Stokes as a left-back. In midfield, Keira Walsh, Sam Mewis, and Caroline Weir played as central midfielders while Chloe Kelly and Jessica Park played on the wings on the same line with the team’s forward, Ellen White. 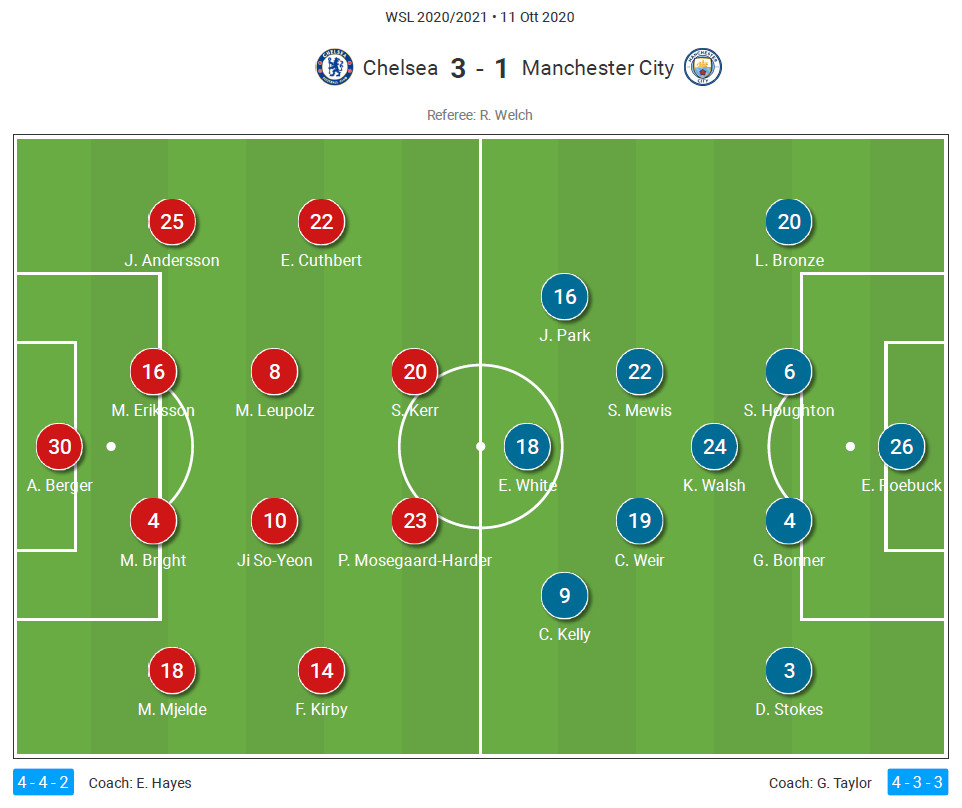 After winning against Arsenal in the Conti Cup, Chelsea continued their winning streak and not only they won against one of their direct opponents for the title, but they also made a very convincing performance.

Chelsea started this game with high pressing on Manchester City’s defence and this pressing continued until the last minutes of the match. Not only Kerr and Harder headed this pressing, but also Kirby, Cuthbert, Ji and Leupolz.

This tactical plan of Hayes consisted essentially of preventing Manchester City from building from the back and obliging them to rely only on long-balls and on the wings.

And as you can see here, six Chelsea players were still putting pressure in Manchester City’s third at the 92nd minute. 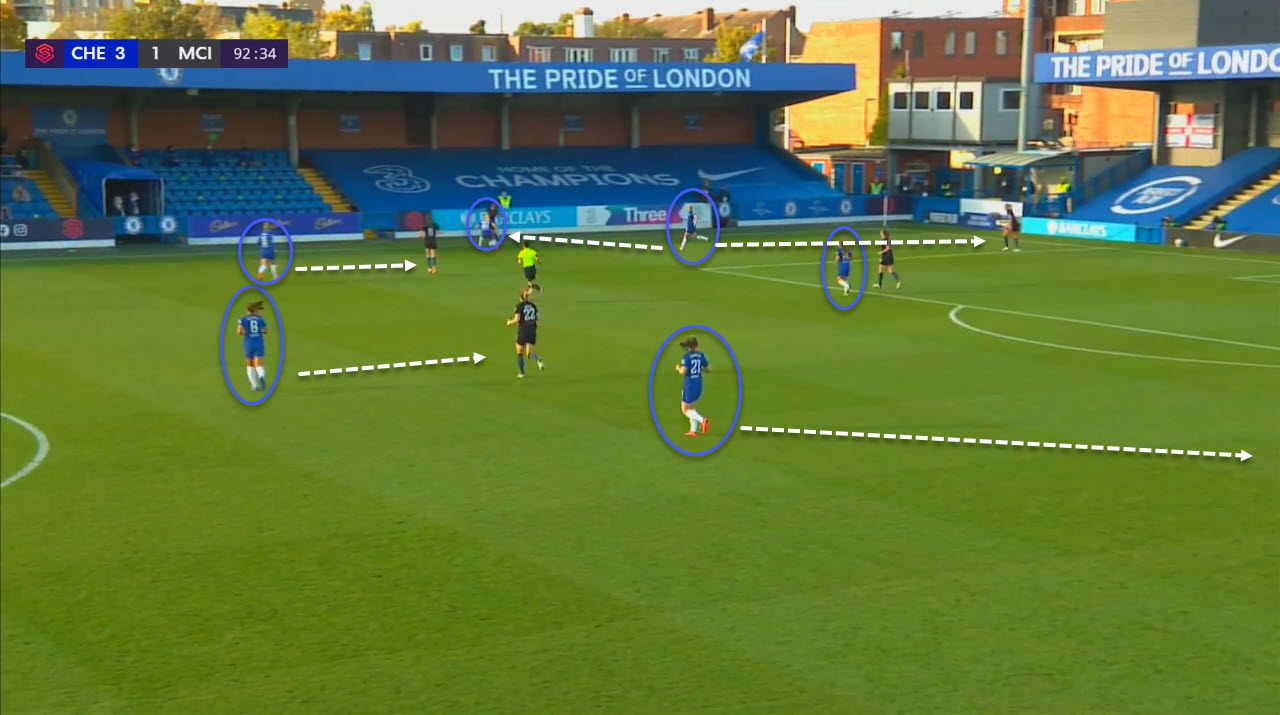 Chelsea’s attacking threat emanated essentially from their fast and accurate passing combinations and movements in midfield and in Manchester City’s third. Ji, Leupolz did a very good job in moving without the ball and in helping a lot in the build-up but the ones who really made a big difference in this game were Cuthbert and Kirby.

Both wingers were excellent and made a lot of problems for Stokes and Bronze even though these two full-backs are two of the best in England at the moment. with their pace and dribbling skills, they were able to overcome their direct markers and often created a lot of danger from the wings by crossing to Kerr and Harder or by cutting inside and shooting.

You can see in this example how Cuthbert was able to run past her marker before cutting inside, fixing two defenders and passing to Harder who was waiting in a shooting position behind Harder. 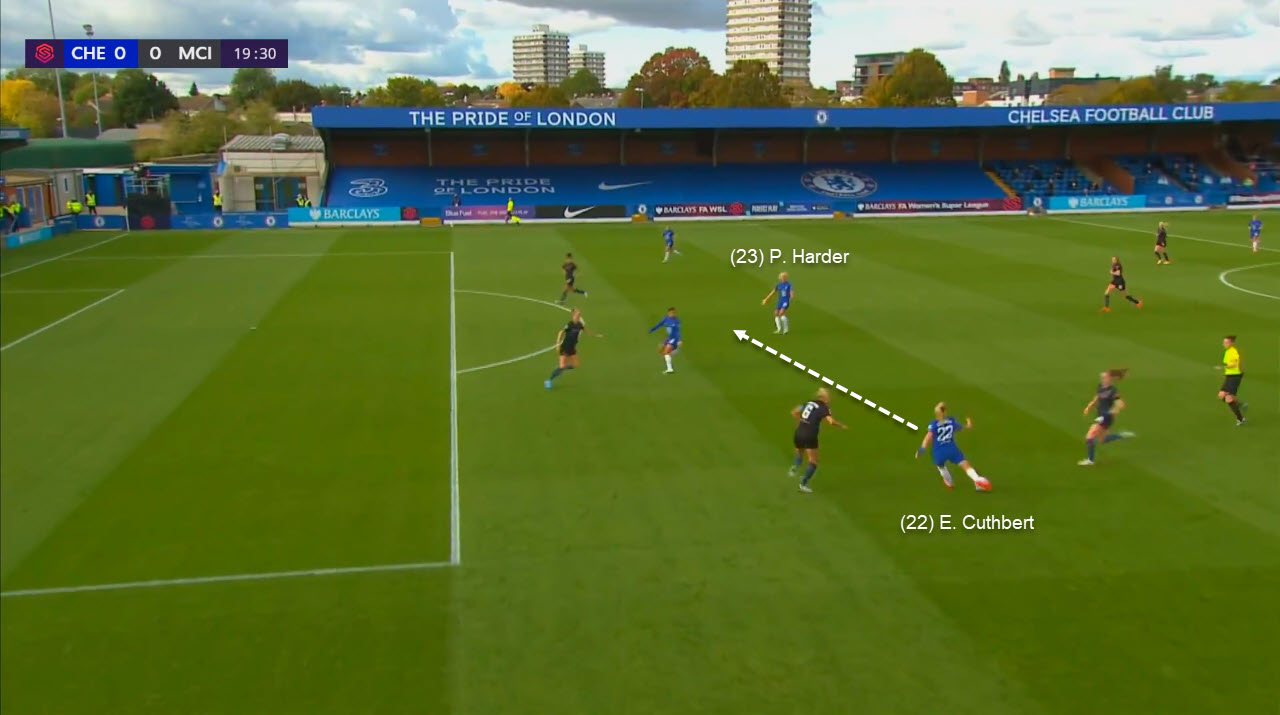 The position of Harder here makes us wonder why she is unmarked. And this was part of Chelsea’s tactical games. Harder is supposedly a second striker alongside Kerr and who should be marked by Manchester City’s centre-backs.

However, whenever she notices some free space between Manchester City’s defence and midfield, she drops a bit to be just behind Kerr and waits for a ball in that dangerous position. Also, Manchester City’s midfield players did not pay a lot of attention to Harder’s movements and made it easier for her to get many passes in that position.

You can see here once again how she asks for the ball in that same position while being completely free from marking. Also, it should be said that Andersson contributed many times in the attacking build-up and this example shows how she moves very high when the team attacks and gives some intelligent passes/crosses too. 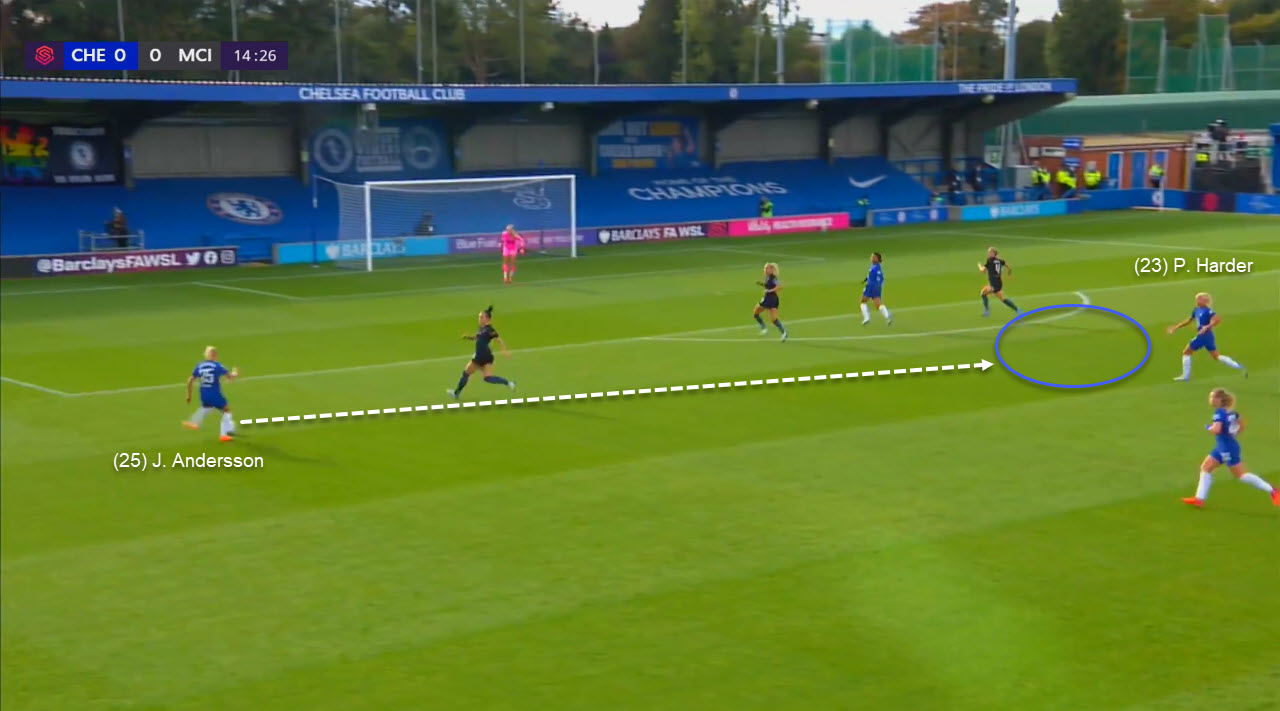 Later on, in the action that led to the second goal after several missed chances from Kerr, Chelsea penetrated from defence and into Manchester City’s penalty area with just two key passes. Ji received the ball from Berger, saw Stokes leaving too much space for Kirby and instantly crossed the ball to her since she was always asking for it.

With that single key pass, Kirby found herself in a very good position with Stokes behind her and Kerr waiting to receive the ball in the box while also being unmarked. And therefore, she passed to her and the latter scored. 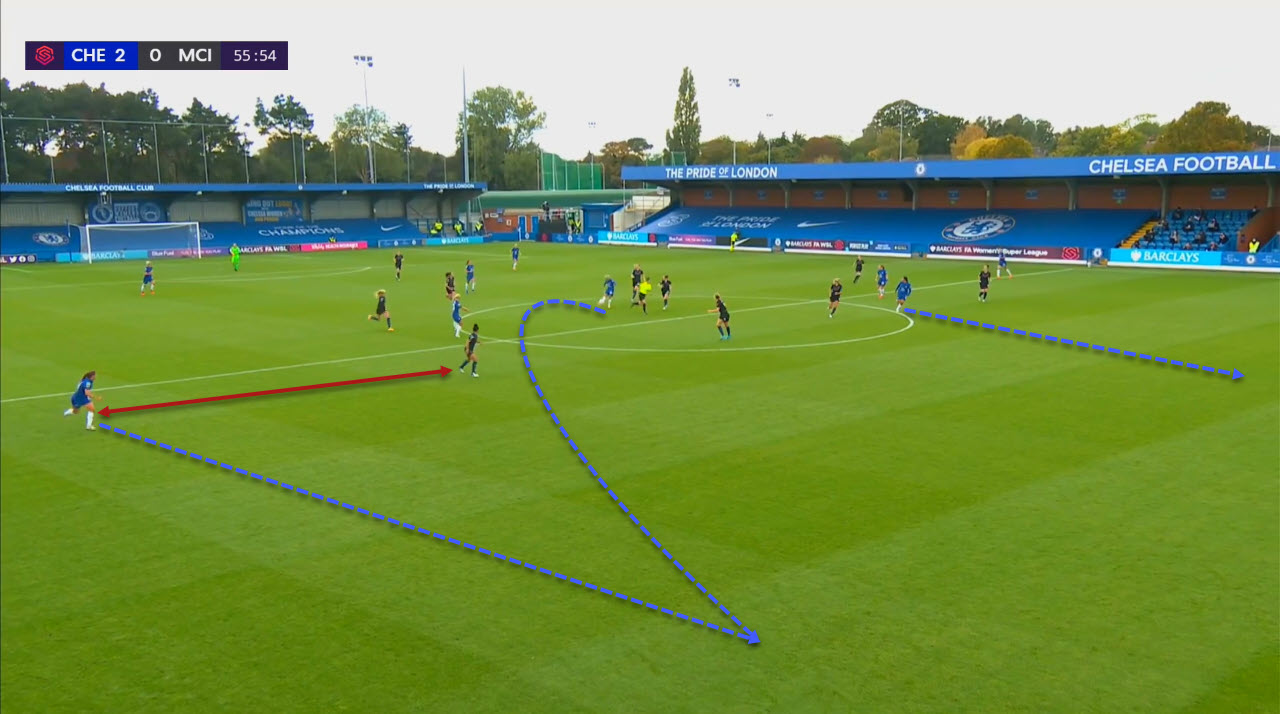 You can see in these two pictures how Manchester City’s defence looked completely unorganised and all defenders were not able to mark their direct opponents tightly or anticipate their passes. 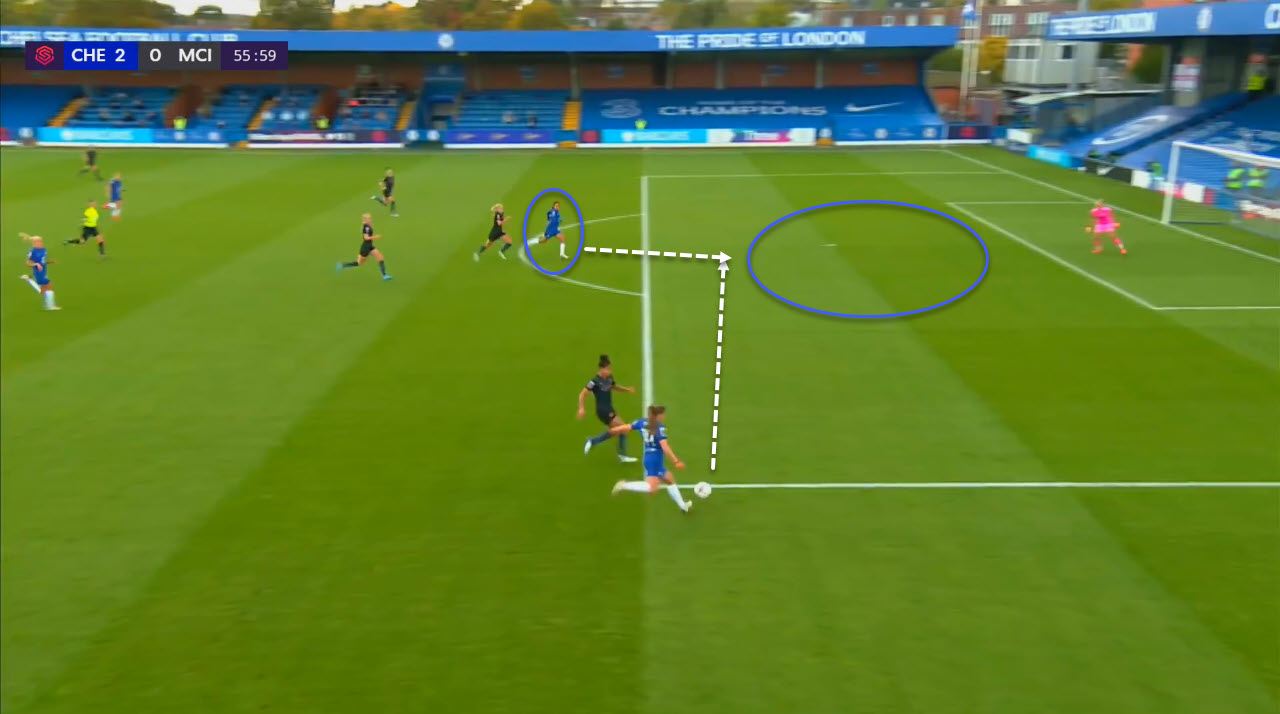 The third goal was also scored with the same idea; fast and accurate passes that make Manchester City’s defenders unable to anticipate the action or catch their opponents. And Kirby confirmed her talent in front of the goal once again by scoring an Inzaghi-like type of goals by dribbling past the goalkeeper and then shooting.

All in all, this win means a lot to Chelsea and will surely make the team do even better in the future since confidence and wins are very important in relation to players’ performances.

The title of this part of the article may sound a bit negative to some because Manchester City lost against a strong team after winning against Tottenham with a convincing result in their last FAWSL match. And that’s true, they won last time and they faced a very organised team this time that created a lot of problems for them.

Manchester City started this game while trying to build from the back but this was not possible due to Chelsea’s high pressing, as we said above. And in cases like these, the team should have alternatives to either counter this high pressing or to find ways out that enable the team to reach midfield and attack.

However, the team’s midfielders did not move a lot without the ball and did not have enough possession to create chances. In fact, Weir and Walsh did not provide attacking assistance and were marked too. Only Mewis was able to create the difference and fight for balls, as she also was able to win many duels.

She was also very close to scoring when she hit the post after making a solo effort as soon as she saw some space in front of her. She was able to shoot while being surrounded by four Chelsea players and with her weaker foot, which shows how fundamental this player is for Manchester City even though this is her first season with the club. 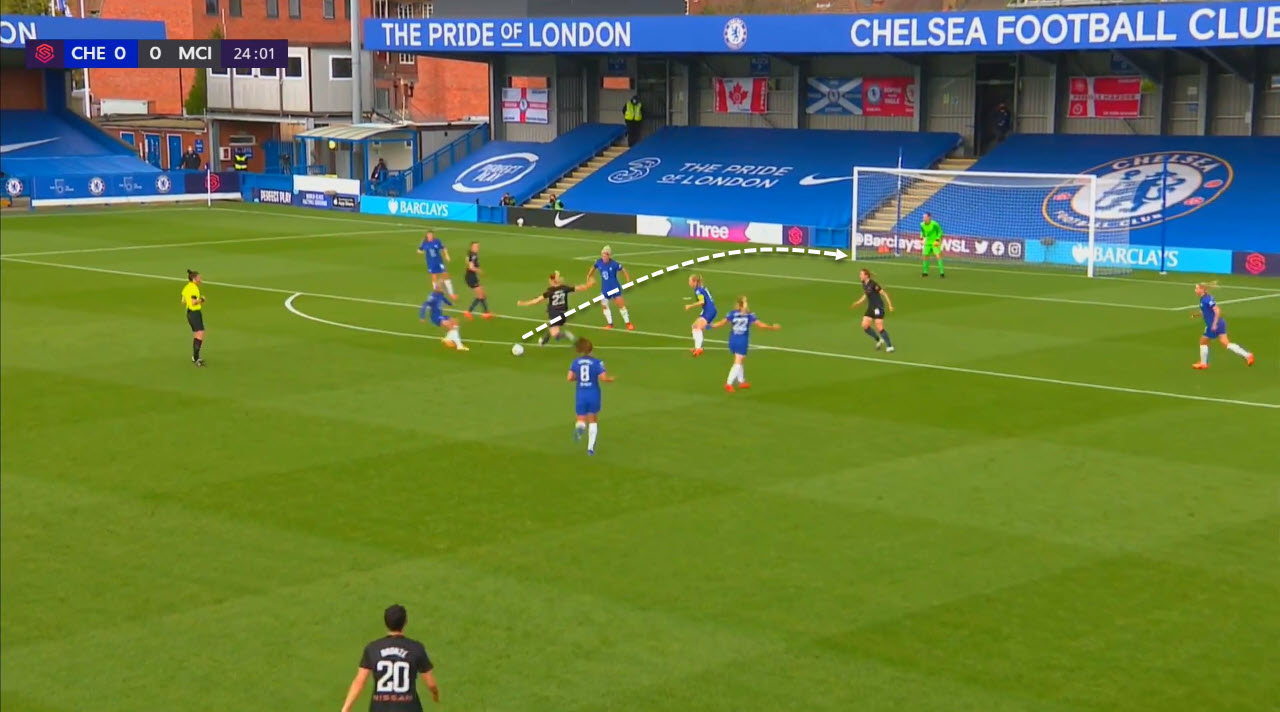 Apart from Mewis, Kelly also played a very good game but was unable to create the difference for her team since Chelsea usually had numerical superiority when defending and Kelly did not find the required support since the lines were distant.

In the same vain, Park, the team’s right winger, was a revelation for Manchester City in this match and was able to win many duels and penetrate near the box and cross many times.

But White was often marked and was not able to do something tangible inside the box since she was the only forward of the team and there was no other attacking midfielders who can surprise the defence or create space for White. Also, even when she was well positioned, her teammates did not always pass to her in the right moments. And therefore, almost all Manchester City’s attempts failed. All this leads us to stress on the importance of the number of attacking players when you are playing against this type of teams.

And for this reason, Manchester City should have added some attacking depth in the second-half at least, but they didn’t. Even when the team was losing, Lavelle replaced White and Stanway replaced Park, instead of adding Lavelle or Stanway as a second striker or as an attacking midfielder.

Manchester City could have played with a 4-2-3-1 formation with Lavelle as an attacking midfielder, or according to a 4-4-2 formation with Stanway as a forward near White, and Lavelle, Kelly on the wings while replacing Weir or Walsh with Jill Scott since she is a better defensive player.

There were also many other attacking alternatives that could have helped Manchester City be more dangerous in the final third.

Another problem that Manchester City suffered from during this game is decision-making especially in passing. And as we said earlier, White’s movements were not always read by her teammates and they often passed to her at the wrong time. For instance, in this action White saw Bronze running with the ball and decided to accelerate to pass Bright and get the ball in the free space behind her. However, Bronze did not exploit this space and decided to pass to Park instead, making White’s movement useless and also giving the time to Bright to mark White. 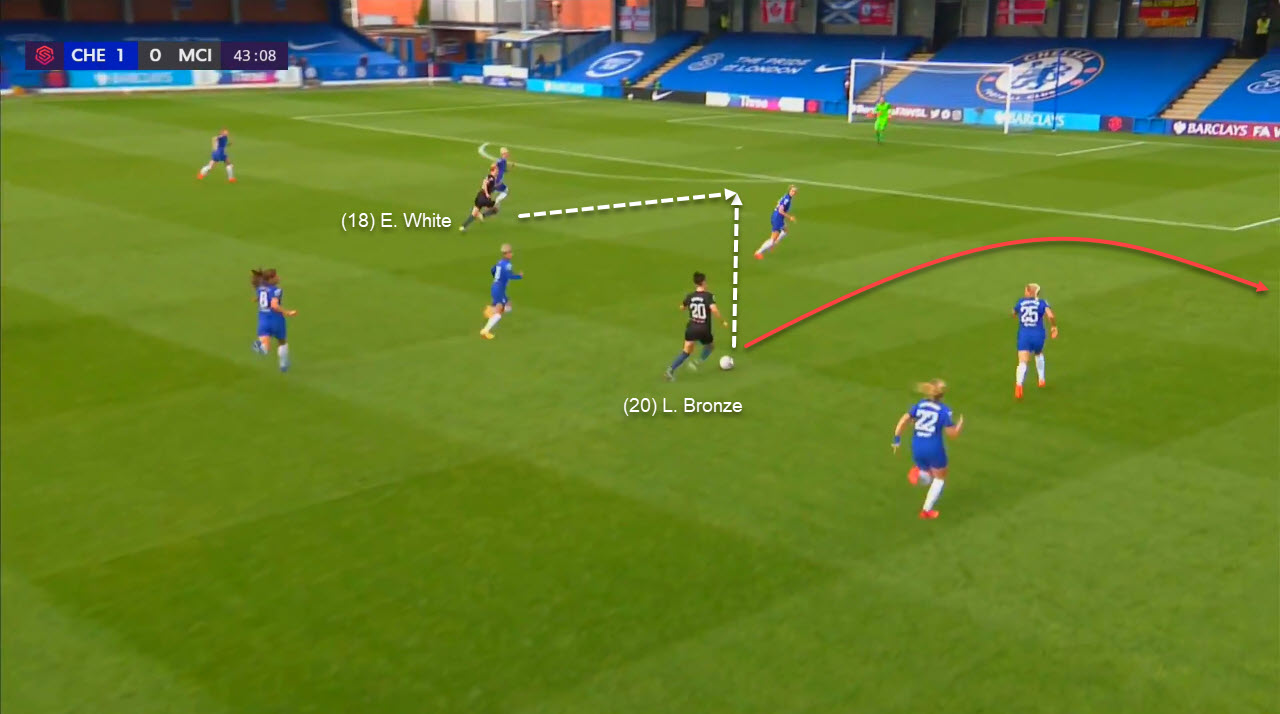 Also, when getting the chance of the game for Manchester City to get back in the game, White also did not exploit the defensive mistake of Chelsea and did not control her ball in the best of ways since she was not expecting the ball to reach her. Otherwise, she could have scored a goal early in the second and things might have gone differently. 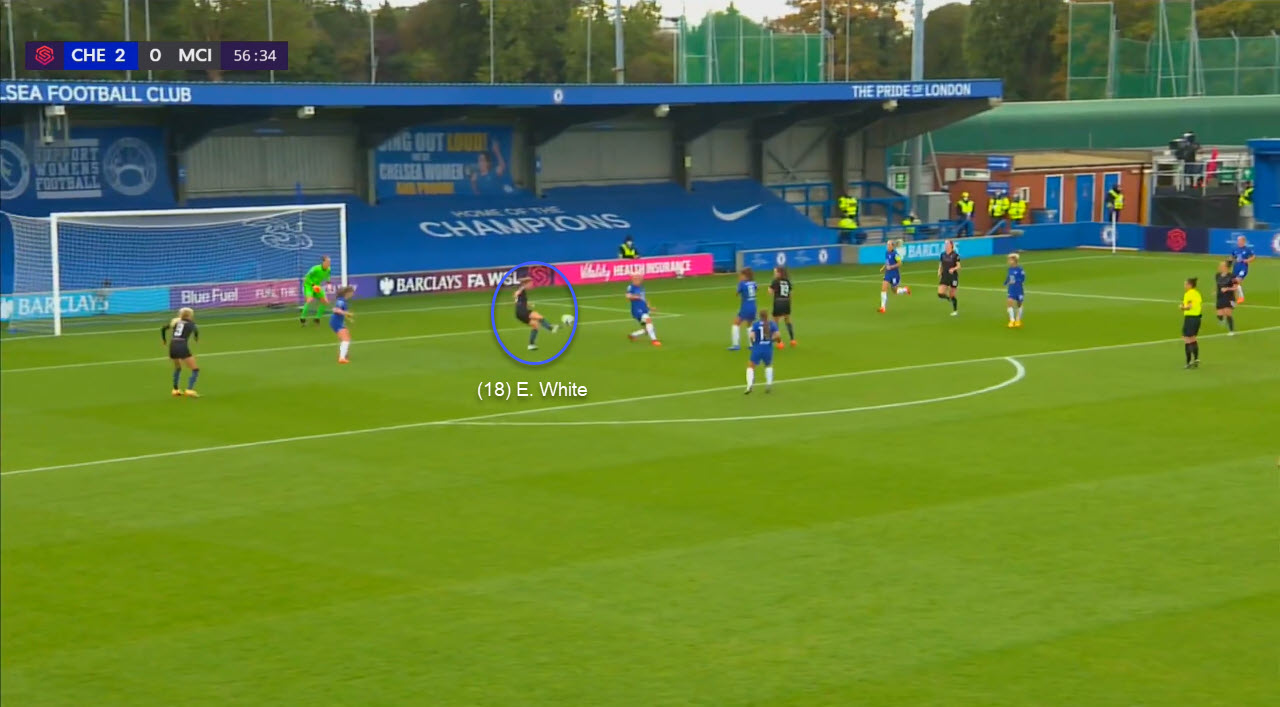 Both teams did their best to win this match but Chelsea were more determined to do so and prepared their match better. But this does not mean that Manchester City players did not play well. On the contrary, Park did a very good performance in this match and created lots of problems for Andersson on the right wing.

Mewis was excellent too and won 59% of duels and helped in the attacking phase as well. Houghton was also good in winning duels, with 69% won, and made a decent performance overall. Also, Kelly kept her good run of form and played very well on the left-wing before scoring a penalty.

For Chelsea, the whole team was very organised and played with a lot of discipline and at the end of the day their efforts were fruitful. Cuthbert, Kirby and Ji were the ones who played better than the others and impacted the result of the game but also Kerr did a good performance and scored.

Harder also moved a lot in the final third and created danger even though she was not able to participate in the goals’ actions. And Leupolz, even though her role is not striking, she did very well in winning the midfield and in intercepting passes. Credit also goes to both centre-backs for stopping Manchester City’s attacking threat.

Manchester City should forget this game and look forward to doing better performances and results in the coming fixtures since the team has the players and the potential of doing much better than this.

And for Chelsea, this win should be exploited positively and it should not make the players over-confident. In other words, this win should only make Chelsea players work harder (not Pernille Harder…) to achieve their season objectives.