We are now in the thick of EURO 2020 action, with matchday two having been completed across all six groups, and matchday three starting from tonight, which will decide the 16 teams to make it to the knockout rounds of this tournament. This round of matches started off a little slowly but ended with a bang with some exciting matches, especially in Group D. Italy continued their supremely confident performance with another 3-0 win, this time over Switzerland – they had never scored thrice at a European Championship before EURO 2020, and have now done so twice in the space of six days. The Italians have thus definitely leapfrogged their way towards the top of the potential contenders’ pile, while some others struggled a little in this round of matches. Belgium had to dig deep to defeat Denmark 2-1 after going behind, with Kevin De Bruyne changing the game off the bench; the Netherlands had a fairly comfortable 2-0 win over Austria; England could only draw 0-0 with Scotland at Wembley, while France also drew 1-1 with Hungary. Germany was arguably the most exciting team in this round, defeating Portugal 4-2 with a stunning display of attacking football that has suddenly turned the initial perceptions around Joachim Low’s side, while Spain was once again held to a stalemate, drawing 1-1 with Poland.

Once again, our lineup is in a 4-1-2-1-2 shape, as the trend of using back threes and wing-backs continued, leaving us with very few options to consider as wingers or wide attackers. Let us know if you agree with our selection, and if not, who would have made this XI instead! 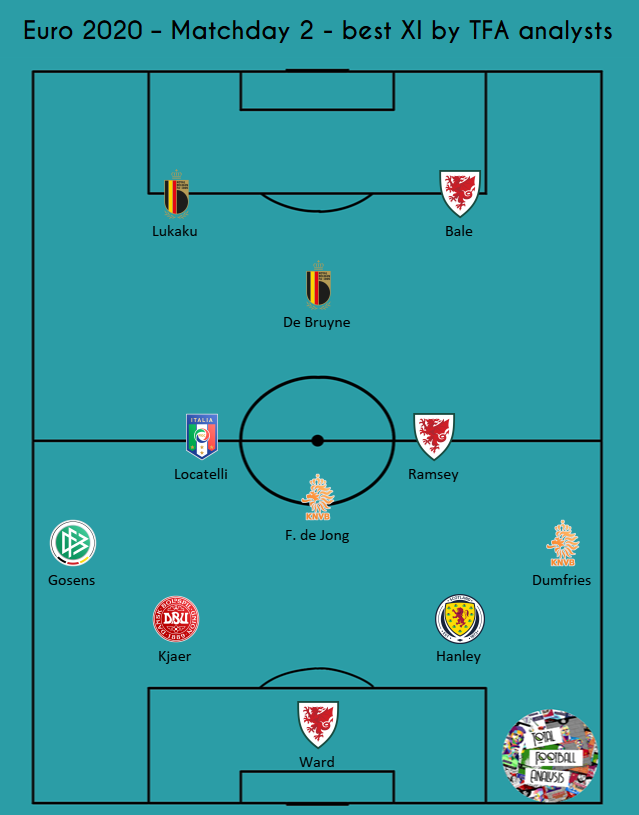 Leicester City’s backup keeper is having an amazing tournament so far. In the first match against Switzerland, he kept a point for his team with few important saves and now against Turkey, he managed to keep a clean sheet and collect 5 saves. He is the only keeper in this round who kept a clean sheet and faced more than 2 shots which is the main reason why we picked him in our best XI.

Denmark’s captain showed incredible leadership and strong character in this tournament when Eriksen collapsed on the pitch and he reacted in the best possible way in a tough situation like that. Kjaer confirmed his mentality and quality in the match against Belgium. Even though they lost, he performed on a high level through the whole match and their loss is very unfortunate given the performance they put in this match. Kjaer won 4 out of 7 of his ground duels and made 3 interceptions. He closed down Lukaku in the first half which forced Lukaku to stay away from Kjaer in the second half and target Vestergaard or Christensen.

This was an incredible performance by the Scottish centre-back against England. Hanley’s defensive reactions were on the top level and he won all of his 5 aerial duels and 3 out of 4 ground duels. He also managed to block 2 shots and make 2 clearances. His performance was one of the reasons why Scotland didn’t concede and why they only allowed one shot on target in this match.

Gosens was deservedly the man of the match against Portugal by scoring once and assisting twice. Worth mentioning is that his attractive goal at the start of the match was ruled off because of offside. Atalanta wide man showed how big a threat he can be with 3 shots on target and 0.7 xG in this match. He created one big chance and made 2 key passes which round off his incredible offensive output against Portugal.

Just like Gosens, Denzel Dumfries showed a very good offensive performance which earned him a man of the match award for the second time in this tournament. Dumfries managed to convert his only shot into a goal after Malen assists on a two-man fastbreak. Dumfries even though he plays as a wing-back in this Netherlands system he is positioned as a winger most of the time. His ability to cover a lot of ground and always be present in both directions is why he is such a valuable asset for his national team.

Once again we witnessed a top performance by the Barcelona midfielder Frenkie de Jong. Even though Dumfries got the man of the match award by UEFA, de Jong was by far the best player on the pitch. Even though it is expected of him to dominate against Austria he still impressed with a few breathtaking moves. His ability to progress the ball and dribble through the middle was a making a difference in this match.

The Sassuolo midfielder was highlighted by many as one who could see his stocks rise in this tournament and they weren’t wrong. He managed to score a brace against Switzerland in a 3-0 win. He had 46 accurate passes with 90% accuracy.  Locatelli managed to score with two shots and it was a special moment to see him score with his left foot leaving Sommer powerless. He is crucial in this Italian dominance so far in the tournament.

It is hard to find midfielders who can get into goalscoring chances like Aaron Ramsey. In a 2-0 win against Turkey, he scored an opener, but also he could score more. Ramsey had 3 shots on target, 2 key passes and managed to dribble past the opponent in 3 out of 4 attempts. He was all over the pitch and showed an incredible work rate.

The Manchester City star made his return on the pitch after a facial injury and it was decisive for Belgium to turn the match around. It took only 25 minutes for De Bruyne to assist and score against Denmark and put Belgium in front. He scored a powerful left-footed strike and his individual quality made a difference. He created 2 big chances and made 2 key passes. De Bruyne was successful in all of his 5 dribbling attempts.

Against Turkey, Gareth Bale reminded us of how good a player he is when playing on his best level. Bale’s creation for his team was decisive in this match and he created 5 big chances, made 5 key passes and assisted twice. He earned a penalty, but he missed the target which would round off his perfect performance, but we doubt he will regret it much since his team won and earned valuable three points.

The Inter Milan forward is again in our best XI. In this match, he didn’t score a goal, but he was an integral part of both goals for his team. Lukaku didn’t play at his best in the first half, but in the second half, he turned his performance around and made important actions which were followed by a goal.

Adam Scully (@ascully24) – This matchday, there were some star performers yet again in what was a very good round of football overall. Germany came away with a surprise thrashing victory over Portugal with Robin Gosens and Thomas Muller having fine performances. Holland comfortably beat Austria with Denzel Dumfries, yet again, having a storming match. Aaron Ramsey, Kevin de Bruyne, Romelu Lukaku and Grant Hanley all had top performances too for their respective countries. However, for me, the player of the round was undoubtedly Manuel Locatelli. The Sassuolo star pulled the strings in midfield alongside Jorginho and managed to score a brace against a tough Switzerland side, helping the Azzurri to qualify for the knockout stages after just two games.

Harshal Patel (@HarshalPatel93) – Germany’s Robin Gosens has to be the best player of the round, just for his sheer impact on the pitch – scoring one and setting up two more, with another goal being disallowed as well because Serge Gnabry was offside. I was extremely impressed by Manuel Locatelli as well – he was excellent against Switzerland and will have certainly added at least 10 million to his transfer value, if not more. This was another week with strong midfield performances, as Aaron Ramsey, Frenkie de Jong and Billy Gilmour all had impressive games, while Kevin De Bruyne completely changed the game for Belgium after being introduced from the bench. It has also been interesting to see the number of teams playing with three centre-backs and wing-backs, and this has meant that we have not seen too many breakout performances from wingers yet.

Lee Scott (@FMAnalysis) – A number of players have stood out in this second round of group fixtures. For me though the standout player has been Frenkie de Jong. He makes the game look so effortless and against the Austrians, he was a constant presence. His ability to receive the ball anywhere on the pitch and then consistently make the correct decision is remarkable. There are few things I enjoy more In football than seeing De Jong carry the ball centrally as he ghosts past opposition players.

Mario Husillos Jr. (@CamusUno) – For me the best player of the matchday was Locatelli. His two goals were the perfect way to round up a great performance commanding Italy’s midfield. He covered all the pitch and managed to create, distribute and finish. I was surprised by Malinovsky’s performance for Ukraine. He was a constant threat from distance and set pieces while also progressing with the ball at his feet and physically dominating opponents. Had he scored his penalty he would have been a firm contender for the best XI.

Toni Bilandžić (@ToniBila17) – Some huge performances in this matchday especially by midfielders De Bruyne, Locatelli and Ramsey who all scored important goals for his teams. I was in awe of Frenkie de Jong’s performance and his decision-making in difficult situations, he was always a step ahead of his opponents. However Locatelli was a star of this matchday, he decided the match with two goals and distributed the ball well the whole match while covering a lot of ground. Special mention goes to László Kleinheisler who was a man of the match against France and he managed to give a tough time to the French midfielders Kante, Pogba and Rabiot.