EURO 2020 started last Friday and we at TFA decided to make our choice of the best XI for each matchday. The first matchday was filled with exciting matches and some teams had to work hard to earn their victory even though they were strong favourites before the match. From a tactical point of view, there has been a nice variety of systems on display but as ever with these tournaments, we have seen that set-pieces are king. If we had to pick out a team that impressed us the most so far then we would say Italy. The Italians look like a team full of confidence with a flexible and effective tactical system and with strength in depth in almost every area of the pitch. We don’t have any Italian in the best XI which perfectly describes how there are no stars in the team and that they are working fantastically as a unit.

A lot of use of wing-backs, as well as a lack of standout performances from wingers, led us to make our best XI in a 4-4-2 diamond formation. We tried to be objective and chose players who made a difference to their sides during this first round of matches. Let’s take a look at which players performed well and earned a place in our best XI for the first matchday. 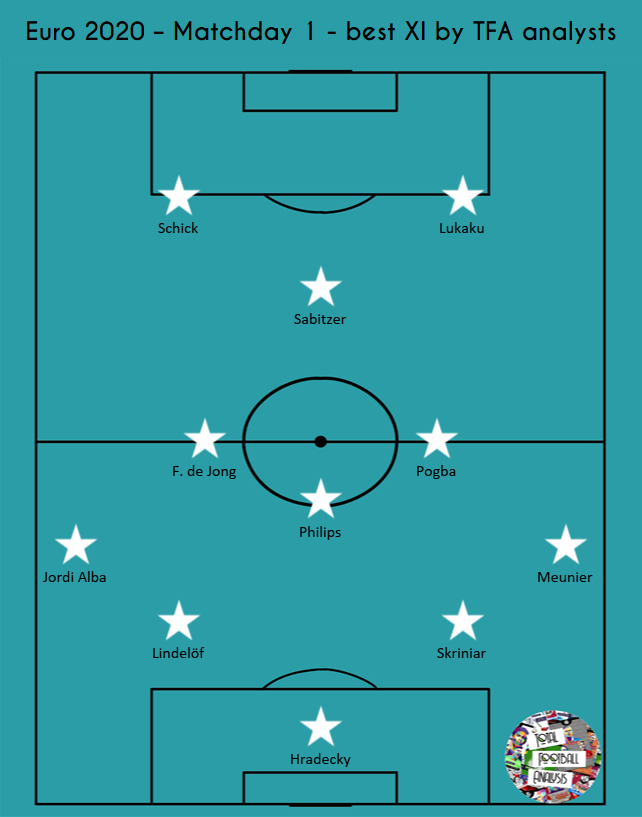 The Finnish goalkeeper had a lot of work to keep a clean sheet as Denmark attempted 22 shots with 6 of those on target. He saved the penalty attempt from Pierre-Emile Højbjerg along with 5 saves through the course of the match. Hradecky’s heroics have given Finland an unexpected chance to qualify for the knockout phase and today we will see how they perform against Russia.

The most valuable Slovakian player had an impressive match at the start of the tournament. Not only did he manage to prevent Robert Lewandowski from scoring, but he also scored a goal himself which turned out to the winner, earning his team valuable three points in their attempt to reach the knockout phase. The Inter Milan centre-back had 94% pass accuracy with 3 of his 5 long pass attempts finding their target as well. He also intervened well in front of his own goal, making 8 successful clearances along with 2 blocked shots.

The Manchester United centre-back, who is often criticized by the fans and media was picked by UEFA as the man of the match against Spain. Sweden were on the back foot for virtually the entire game, with just 15% possession, but managed to keep a clean sheet, and Lindelöf was crucial to this effort. Lindelöf completed 9 clearances and had 8 recoveries while also blocking two shots.

It was a big dilemma to choose between Jordi Alba and Leonardo Spinazzola, but we decided to pick the Spanish captain because he was a threat to Sweden throughout the whole match. Spain attacked mostly through the left side and Alba had 148 touches of the ball which was the highest for any player in this match. It is unfortunate for him that he did not manage an assist since he created 2 big chances and put 8 crosses into the penalty area, but his teammates were not able to take advantage of this creativity.

He came on in the 27th minute to replaced the injured Timothy Castagne and it took him only 7 minutes to score a goal and give Belgium a 2-0 lead. Meunier capped his fine performance with an assist for Romelu Lukaku as well towards the end of the match, and with Belgium dominating possession, it would be difficult to expect more in terms of attacking performance from a wing-back. He is also likely to start for Belgium for the rest of the tournament since Castagne has now been ruled out, so we can expect more performances of this calibre.

Many people wondered if he deserved a start for England against Croatia and Phillips reassured everyone with his display on Wembley. Phillips made an impressive run before assisting Sterling for a goal which earned England a huge three points at the start of the campaign. He had 91% pass accuracy and covered 10.3 kms against the highly-rated Croatian midfielders.

An impressive performance by the Manchester United midfielder. Pogba’s pass to Lucas Hernandez for the opening goal was a thing of beauty; however, Pogba isn’t in our squad only because of that majestic pass, but also because he made very good decisions on the pitch and played at a high level. Pogba won 4 out of 5 aerial duels and intercepted the ball 3 times while covering a distance of 10.6 km and his defensive work rate was important against Germany.

This one was tough to decide since we had to choose between two Barcelona midfielders Pedri and Frenkie de Jong, but we opted for the former. He had a very good performance in an entertaining match against Ukraine. De Jong bossed the midfield and had 92% pass accuracy in 101 pass attempts. He had 5 successful take-on in 6 attempts and made 2 key passes. Defensively he was on his usual level winning 82% of his ground duels and he made 2 interceptions without making a single foul. This was a top-quality performance from the Dutchman, and served as a reminder that we sometimes do not appreciate players enough unless they score or assist.

Sabitzer’s fine display for Austria against North Macedonia could not go unnoticed because he did a little bit of everything for his team. The assist for Stefan Lainer was breathtaking and he didn’t stop there with his creation. Sabitzer had 88% pass accuracy from 68 pass attempts. What was impressive was his precision to switch the ball to the flank and quicken the flow of the game for Austria; he had 10 accurate long passes in 11 attempts. Neither of his two shots hit the target, but his overall performance is what you want from your main creator.

What a performance by the Czech Republic forward! Schick scored a header in the first half after a Vladimir Coufal cross, but the second goal is one to remember and it will be on highlight reels for years to come. After Tomas Soucek’s ball recovery, Schick attempted a shot from the halfway line and scored over David Marshall for a memorable strike, which is, according to UEFA, the longest distance goal in the history of the tournament at 49.7 yards. Schick had 6 attempts with 5 of them going on target which perfectly describes his precise shooting in this match.

Another Inter Milan player in our best XI is Romelu Lukaku. Belgium’s all-time top goalscorer added 2 goals to his account in the match against Russia and led them to a 3-0 victory. In the absence of Eden Hazard and Kevin De Bruyne, he took on the responsibility and showed that he can lead Belgium in this tournament. Lukaku took 3 shots and scored 2 goals while one shot was blocked, his finishing is often questioned but he didn’t waste chances in this match.

Adam Scully (@ascully24) – The best player of the round was extremely difficult to choose because of the number of top performances across the board. Marcel Sabitzer had a wonderful game playing in between the lines of North Macedonia’s 5-3-2, whilst Kalvin Phillips put in a prime Luka Modric performance as a box to box midfielder for England in front of Luka Modric himself. However, for me, Paul Pogba was the best player in the first round of matches. He ran the show against Germany, attacking with conviction and purpose and defending with tenacity. His second assist for the goal alone was sumptuous and the Frenchman played a number of line-splitting balls from deep to set players like Kylian Mbappe and Karim Benzema away on the break.
An underrated performance was Victor Lindelöf against Spain. The centre-back made 9 clearances and 2 blocks against an extremely dominant and fluid Spanish side, and the Swede never put a foot wrong all game, rightfully picking up the Man of the Match award.

Harshal Patel (@HarshalPatel93) – I was extremely impressed by Victor Lindelof for Sweden – more so since I am a Manchester United fan and he has not been as imperious for his club as he was against Spain. Kalvin Phillips was the slightly surprising player of the match for me from the England-Croatia game – the Leeds man was extremely effective in a box to box role which is completely different from what he does for Marcelo Bielsa at Elland Road. I thought Pedri was very good as well – he combined extremely well with Alba, his Barcelona teammate, and at just 18 years old, it is frightening to think just how good he can be. Of course, Pogba’s performance was pleasing to me as well as a United fan – he was key to France’s creativity, but also put in a defensive shift, something he is often criticized for not doing. Overall, it has been a pretty good first round of matches, and I am looking forward to seeing how some of the players and teams respond to their results in the upcoming matches.

Lee Scott (@FMAnalysis) – Players who have impressed me it is fair to say that there have been a few. Frenkie de Jong lit up the Dutch team with his technique and elusive ball control. Lorenzo Insigne was a constant threat for the Italian from their left-side and Kalvin Phillips transcended into the modern incarnation of a box to box ‘8’ for England. My player of the first round, however, is one of the youngest players at the tournament in Pedri of Spain. The Barcelona midfielder showed a willingness to receive despite the pressure he was under and he was calm and composed in possession. He manipulated the ball cleanly and was a source of threat for the Spanish with his clipped passes to access an overlapping Jordi Alba on the left.

Mario Husillos Jr. (@CamusUno) – Paul Pogba is the best player of the first matchday for me. Not only he produced some moments of absolute magic in the best match of the tournament so far but he also worked incredibly hard in defence and was key in France’s solid display. And all that with so much noise and doubts around his future and club performances. I also liked Koke’s role in Spain and how well he adapted his game to get the best out of Llorente as a right-back. I think Spain can get a lot from that in the next games.

Toni Bilandžić (@ToniBila17) – Even though I’m not his biggest fan Milan Škriniar is the best player of this matchday for me. He closed down the best striker in the world and was on a high level the whole match not allowing him to get into a good opportunity to score. Scoring a winner was the icing on the cake for his performance. I really liked Sabitzer’s performance against North Macedonia and I’m looking forward to the match against the Netherlands to see if he can replicate it against a tougher opponent.