EURO 2020: Our best XI from the quarter-finals – analysis

The EURO 2020 quarter-final matches were all very close and tense encounters, other than England vs Ukraine, which finished with an emphatic win for the Three Lions. We saw some great performances across these matches, which once again made it quite difficult to pick just 11 players for our best XI of the round. Italy managed to go past Belgium in a very close match with a lot of intensity. Denmark won 2-1 against the Czech Republic and they continue their dream towards the final. Switzerland was a tough opponent for Spain and the winner was decided on a penalty shootout where Switzerland’s penalty takers missed three in a row to send Spain through. Let’s see which players performed the best, in our opinion, and were picked for our best XI of the quarter-finals. 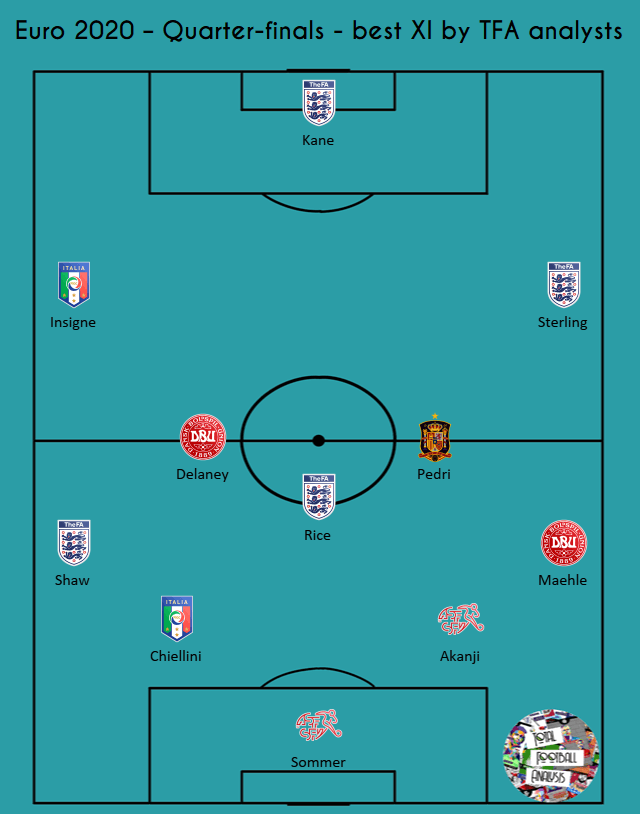 The Switzerland goalkeeper saved a decisive penalty against France leading them to the quarter-finals, but his heroics weren’t enough to see them through in the match against Spain. Sommer had an impressive 10 saves in this game, with 9 of them being to shots from inside the penalty area. He managed to save Rodri’s penalty as well in the penalty shootout, but other than Mario Gavranović, his teammates weren’t able to convert their penalty attempts which led to their loss. His saves were crucial for Switzerland throughout the whole tournament, and he definitely did not deserve to go out in this manner.

This was a high-quality performance by the veteran centre-back. Chiellini managed to stop Romelu Lukaku and prevent Belgium to score from open play. He had six clearances, one interception and he blocked one shot. However, the biggest thing he did and it isn’t measurable in stats is his positioning which was at a top level through the whole match. If he keeps this form it will be hard for the opposition forwards to make an impact.

Just like Sommer, Manuel Akanji’s defensive performance kept Switzerland in the game especially after Remo Freuler got sent off. Akanji had five clearances, four tackles and he blocked one shot. He managed to win six of his nine ground duels and he won all three aerial duels he had. The only bad thing about his performance was his miss in the penalty shootout, but his performance in the 120 minutes match was superb.

If there were doubts about Luke Shaw’s ability to compete at the highest level we think that those doubts are now disappearing after this season and especially after Shaw’s performances for England. Two assists for the Manchester United left-back, three key passes and three successful crosses from three attempts are just the headline numbers from another super performance. He didn’t have too much defensive work because England dominated Ukraine, but made a big difference at the other end of the pitch, with his movement also playing a big role in creating space for Raheem Sterling in the build-up to England’s opening goal.

This is the third time in a row for Joakim Mæhle to appear in our best XI, and he is making a strong case to be one of the best players of EURO 2020. This has been an impressive breakout season for Mæhle who moved to Atalanta in January and has topped it off with superb performances for Denmark at this tournament. In the match against the Czech Republic, he assisted Kasper Dolberg in the 42nd minute which doubled the Danish lead with a sublime cross with the outside of his right boot, underlining his excellent technical ability. Mæhle missed one big chance as well, which if he scored, would be the third match in a row with a goal for him. He had only one cross attempt and it was successful, but he also had two key passes. Once again he was one of the best Danish performers in the match.

57 minutes on the pitch was enough for us to put Declan Rice in our best XI, he was substituted after 3-0 and he earned himself a deserved rest for the semi-finals. Rice was once again impressive at holding the midfield and progressing the ball forward, he made 35 passes with 90% accuracy. He protected the defence well with three clearances and by intercepting four passes. There is not much more you can expect from your defensive midfielder.

What can we say about Pedri performances in this tournament that isn’t already said? The youngster had 84 successful passes with 91% passing accuracy. He had five key passes and found his teammate with six long passes in the same number of attempts. Pedri won six out of ten of his ground duels and made two interceptions. Massive performance for Spain’s brightest talent.

Thomas Delaney scored an early opening goal to put Denmark in front of the Czech Republic. His work rate was amazing and he covered a lot of ground while being involved in actions on both ends of the pitch. He won four of eight ground duels and six out of eight aerial duels while intercepting three passes and clearing the ball three times. Along with Pierre-Emile Hojbjerg, he is making the highest working midfield duo in this tournament.

Lorenzo Insigne is playing on a good level since the first match, but the match against Belgium was his best in the tournament. He had three shot attempts and one of those attempts ended in the back of the net. Not only that he scored a beautiful goal, but he also managed to create two big chances for his teammates. Insigne was very creative and he made three key passes and attempted four crosses. Napoli star could make a difference in the semi-final against Spain as well.

England’s best performer in this tournament showed his creative side in the match against Ukraine. His defence-breaking assist for Harry Kane in the 4th minute was arguably the best assist of the tournament. His movements off the ball were crucial for England to create chances and he made an impact by beating the opponents with three successful dribbles out of four attempts. Sterling won nine out of his 15 ground duels while also attempting three tackles which shows how motivated he was in this match to perform for his team.

England’s captain is back on scoring, after scoring once against Germany he now scored twice against Ukraine. He attempted three shots on target and one off the target. Kane scored the 1st goal of the match and the 3rd goal after Sterling and Shaw assists. He won all three of his aerial duels and made one key pass. Tottenham star is hitting his goalscoring form just at the right time for his national team.

Adam Scully (@ascully24) – This was another great round of fixtures to decide who got to the semi-finals. Denmark, Italy, Spain and England all progressed and there were some star performers in this round. Harry Kane bagged a brace to help England thrash Ukraine whilst Raheem Sterling and Luke Shaw had fantastic performances with the pair getting 3 of the 4 assists for the Three Lions on Saturday night. Although Switzerland exited the tournament on penalties against Spain, Manuel Akanji had an incredible game alongside Nico Elvedi at the back for Switzerland. However, for me, the performance of the round so far has to be Giorgio Chiellini’s defensive masterclass against Belgium. The veteran defender stopped everything that came his way against an attacking trio of Romelu Lukaku, Kevin de Bruyne and Jérémy Doku. The Italian, who turns 37 in a little over a month, rolled back the years with a vintage performance against the Belgians and as this may be his last major tournament with the Azzurri, it would be unfair not to admire how good his performance really was.

Harshal Patel (@HarshalPatel93) – Joakim Mæhle has now made our team three weeks in a row, and is surely one of the players of the tournament so far. England’s left side was superb against Ukraine – Luke Shaw and Raheem Sterling were huge creative influences and I thought Harry Maguire had a good game as well. Pedri continues to make a mockery of the fact that he is just 18 years old, and I expect him to play a huge part for Spain in their semi-final against Italy again. For the Italians, Giorgio Chiellini put on a defensive masterclass, showing that for all that we value centre-backs for their ability on the ball nowadays, there is still space in the game for good old-fashioned defending. The fact that we have two Swiss players in the lineup is also a testament to their resilience and quality – they came extremely close to knocking Spain out and can hold their heads high after an excellent tournament.

Mario Husillos Jr. (@CamusUno) – Another round of matches full of difficult choices in the best XI with lots of great performances. This time I’ll pick Raheem Sterling as the best player of the round. He’s been the main threat for England in the tournament, always wanting to create something with his movement, dribbling and finishing, and in the match against Ukraine he did it again. His pass for Kane’s first goal was phenomenal, the best assist in the tournament so far for me, and his overall performance once again proved it will be very difficult for Southgate to find a better player in his position despite the competition. Another performance I enjoyed was Declan Rice’s. His excellent defensive skills and ability to read the game are key to England’s excellent defensive performances and on top of that, he adds more progression and ball-playing abilities each match.

Toni Bilandžić (@ToniBila17) – as football fans we can only enjoy such quality performances by teams and players in the quarter-finals. Yann Sommer kept Switzerland in the game for 120 minutes and also managed to save one penalty, but it wasn’t enough for Switzerland to go past Spain into the semi-final. Impressive performances by Pedri, Joakim Mæhle, Luke Shaw and Raheem Sterling once again. However, I have to go with Giorgio Chiellini as my best performer as he had an impressive match for Italy and his experience and positioning are priceless in close encounters like the match against Belgium. Big fan of Lorenzo Insigne’s performance as well.