Orkun Kokcu 2021/22: Why Arsenal are interested in the Feyenoord midfielder – scout report

The Eredivisie is filled with talent, especially young talent. The league and the teams in it often prefer to give the opportunity to younger players to develop and express themselves and this usually leads to them being a feeder to some of the bigger clubs and leagues in Europe. A player who will likely tread this path is Feyenoord midfielder Orkun Kokcu. The Turkish 21-year-old has come through the ranks of Feyenoord and has now established himself as an integral part of their team but also one of the Eredivisie’s best midfielders. This season he has now added goals and assists to his game which has helped elevate him to a new level and if he continues his performances then a move away from Feyenoord may be inevitable this summer. Arsenal is the name currently most linked to Kokcu but there will be plenty more suitors all over Europe with other Premier League clubs such as Chelsea likely to have their interest peaked

This scout report and tactical analysis will examine Kokcu’s game and why he is one of the league’s best midfielders.

In today’s world of player scouting and player recruitment, the use of data is vital. With the majority of clubs being data-driven or heavily incorporating data into their recruitment process, assessing some key metrics surrounding a player is vital. In this data section, we will look at some in possession and out of possession metrics to tell us more about Kokcu and some of his key attributes. The sample shows Kokcu amongst other Eredivisie midfielders with over 500 minutes this season.

Progressive passes are now one of the main metrics used to assess players on ball contribution, especially for midfielders. As shown below, Kokcu is one of Eredivisie’s best progressive passers. With the most accurate progressive passes at 92% accuracy and one of the highest volumes 10.6 per 90. This shows us that Kokcu has the ability to frequently and accurately move the ball forward for his team. 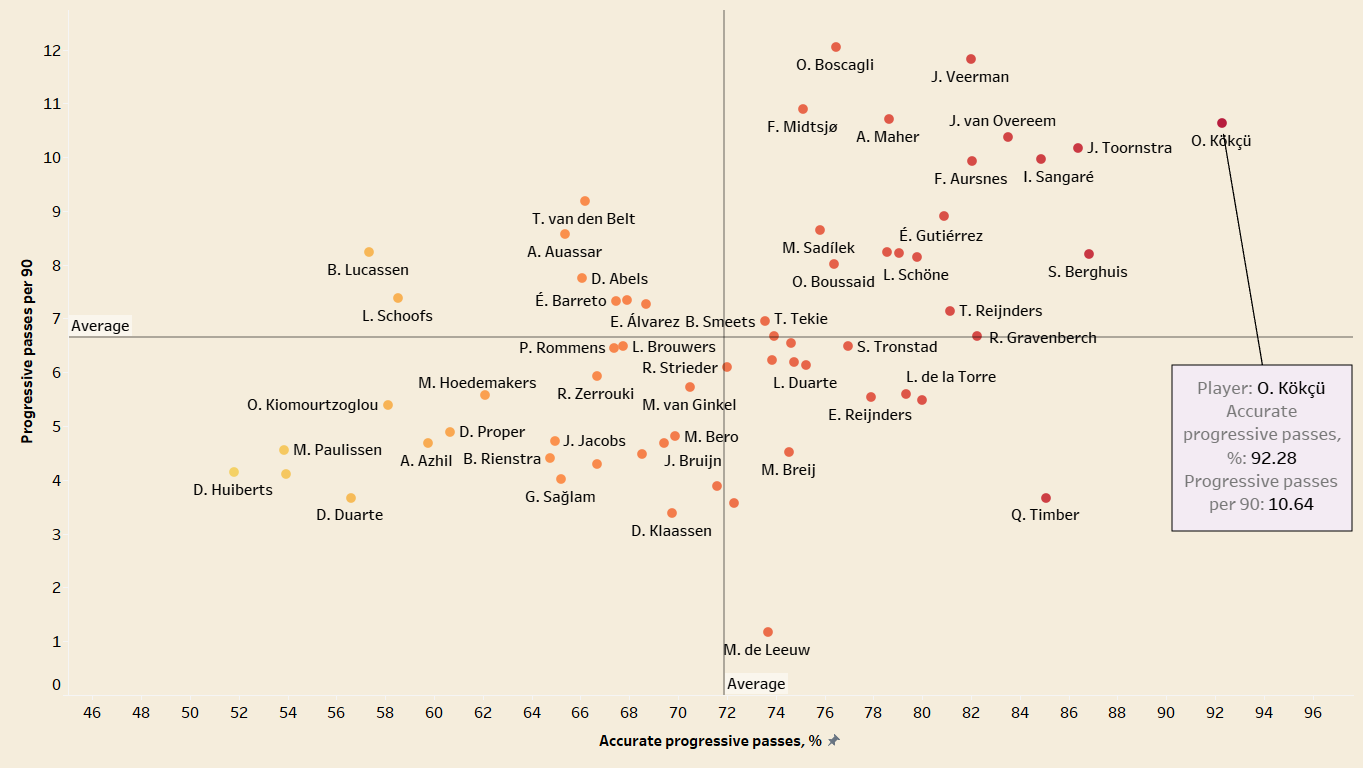 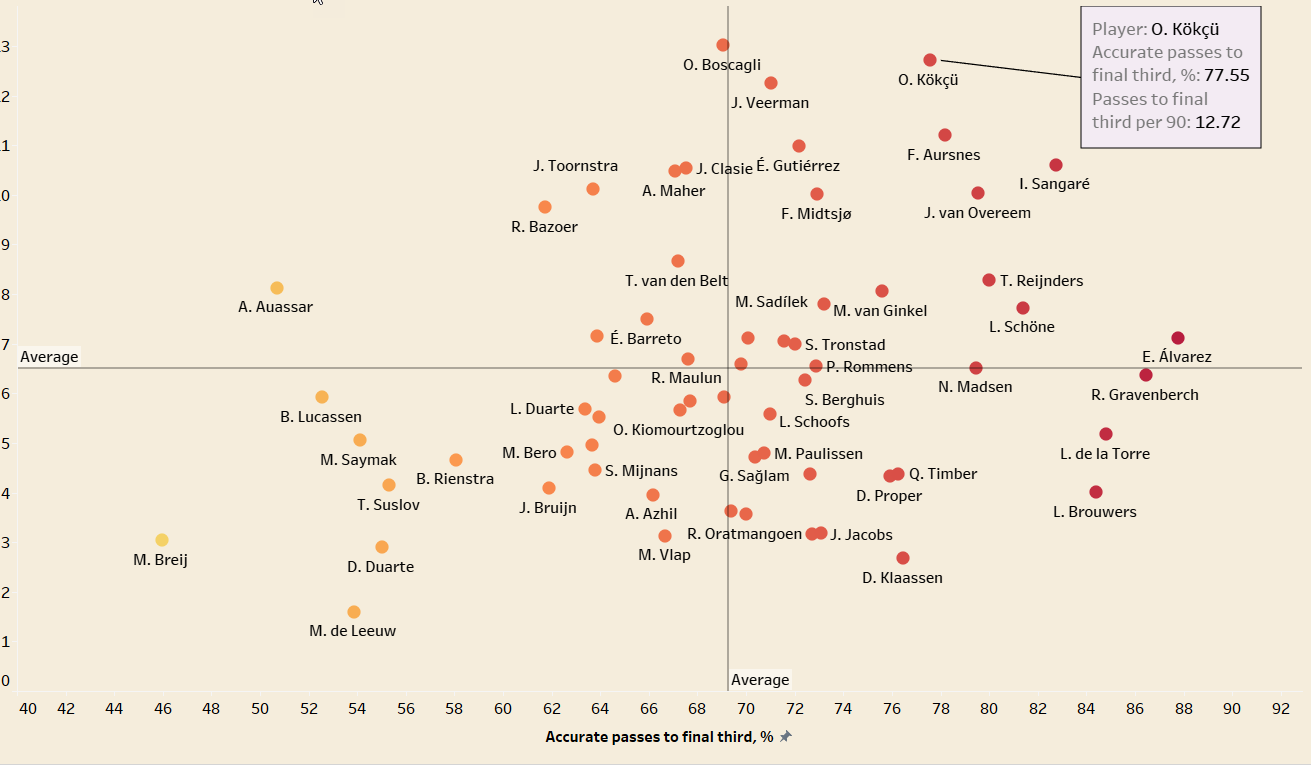 The final in possession metrics we will address are smart passes and key passes. A key pass is a pass that instantly creates a goal-scoring chance for a teammate and a smart pass is a creative pass that attempts to break the opposition’s defensive line. Kokcu has performed well in both metrics this season, with 0.7 key passes per 90 and 1.1 smart passes. Indicating that Kokcu is a real creative presence on the ball. It is also worth noting that Kokcu has eight assists this season. 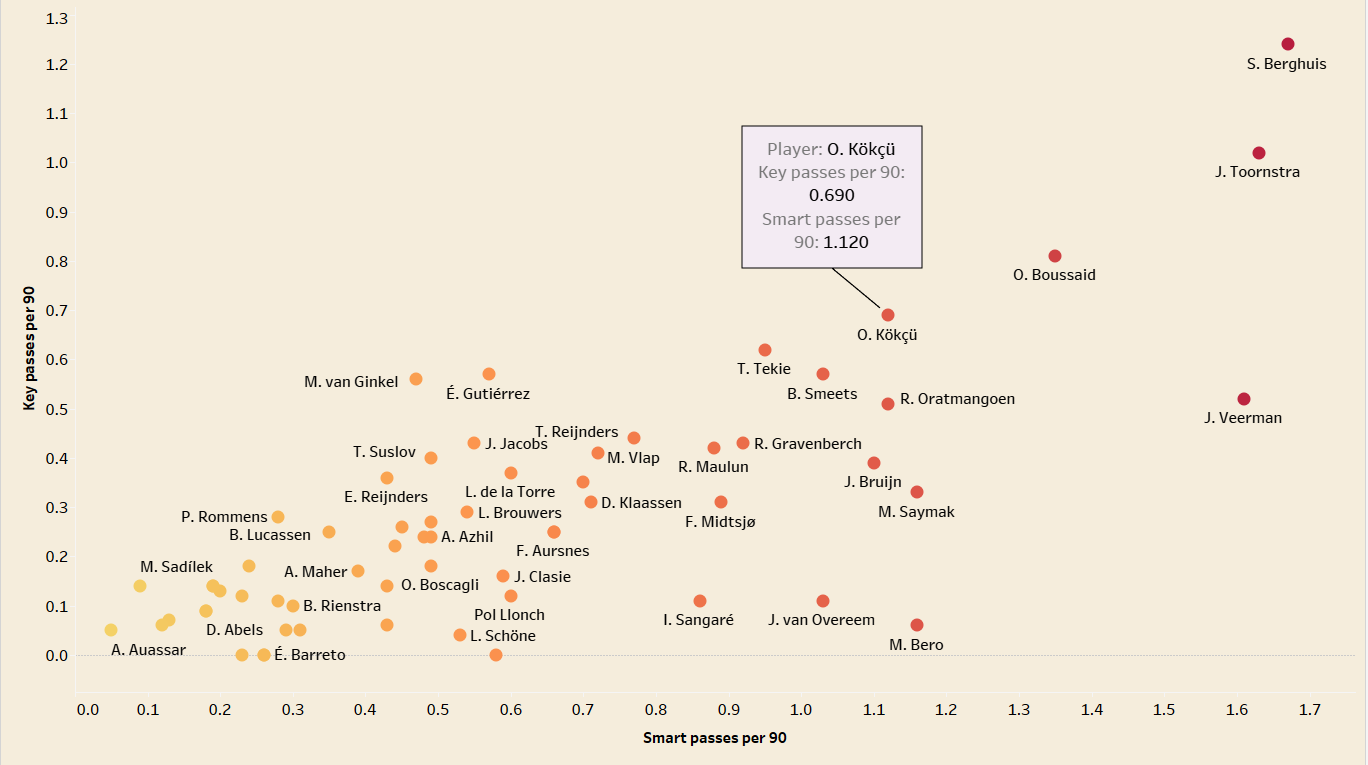 There is only really one player who comes close to Kokcu in these metrics this season and that’s Joey Veerman of PSV. This includes the likes of Edson Alvarez and Ryan Gravenberch of Ajax who are both highly rated and drawing the attention of Europe’s elite.

Out of possession qualities are harder to quantify, If you have read some of my scout reports before you will know I have touched upon this but using data to measure off-ball qualities is harder as many good defensive actions cannot be measured, think of positioning or reading of the game. This means more analysis and context are needed when looking at some defensive metrics. Below shows defensive duels per 90 and successful defensive duels win percentage. Kocku is well below average in duels per 90 however has a strong win percentage at 66%. 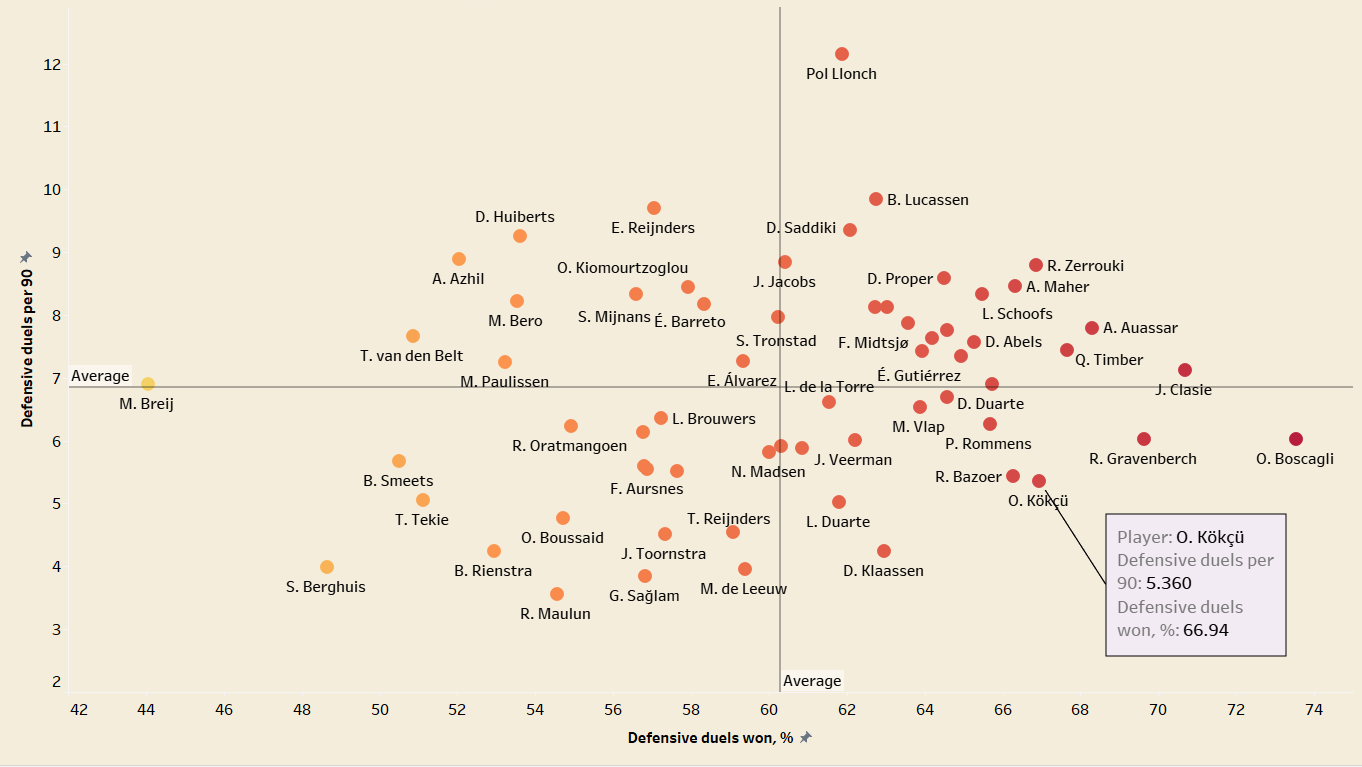 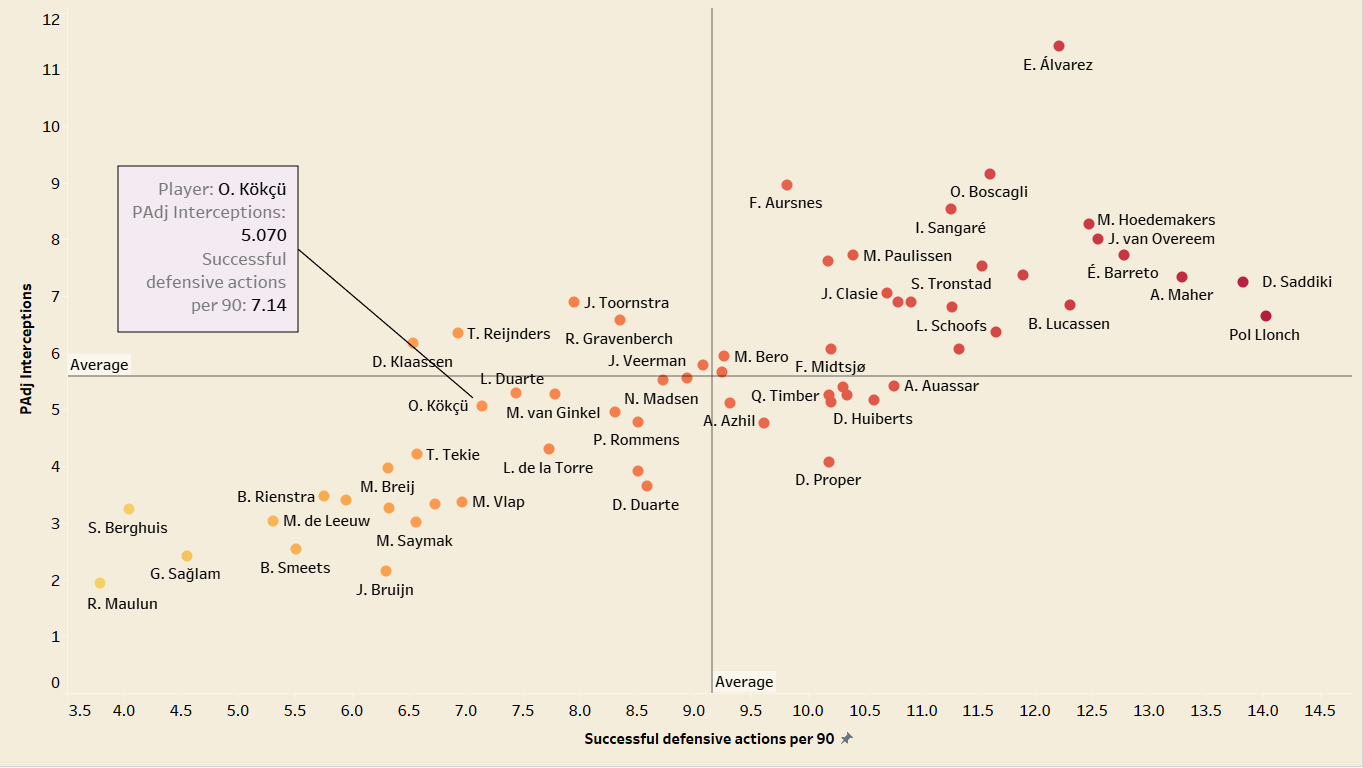 Defensively Kokcu may need to improve however he does more than make up for this while in possession. Hopefully, this data section has given more of an insight into the kind of player Kokcu is and some of his key attributes and potential areas to improve.

Within the data it became apparent that Kokcu is an excellent passer of the ball, he has the skill to execute a variety of different passes whether he is looking to progress the ball up the field in the deeper phases of the attacking play or passes in and around the box to create goal-scoring opportunities for his teammates. Below we will show an example of both types of passes that Kokcu can make.

Here you’re going to see a pass from Kokcu which leads to a goalscoring opportunity for Feyenoord. Kocku is looking to get between the lines into the pocked of space highlighted. Kokcu waits for the pass to be made before he moves into the space, this prevents an opposition defender from getting too tight and filling the space.

Kokcu receives the ball off his back foot and with his second touch plays a reverse pass behind the opposition backline for his teammate to run on to. He manages to get a shot off but is wide of the target. Kokcu shows a good understanding of the game to get between the line and then execution to release a player.

This will be echoed in the second example where again Kokcu has advanced forward and plays a pass which creates a goal-scoring opportunity for Feyenoord. Heracles are sat deep looking to nullify the space for Feyenoord, the Heracles number five is going to push forward and then create a pocket of space to be exploited.

Kokcu is going to keep his head up and wait for this space to appear. As the five presses, the space opens and Kokcu clips an excellently weighted and precise pass for Guus Till to receive the ball in the box.

Both passes show that Kokcu possesses real quality in and around the box to create goal-scoring opportunities for teammates.

In addition, to being valuable in and around the box, Kokcu can contribute to the deeper phases of the build-up with more progressive and long-range passes. Here you can see Feyenoord when the opposition is sat deeper in a tactical low block. When this occurs Kokcu will often drop deeper to get on the ball and orchestrate play from deeper. This is shown here when Kokcu has dropped deep to get on the ball and plays an excellent diagonal pass to a teammate.

This pass both progresses Feyenoord up the field and also changes the point of attack. Giving them a better opportunity to exploit opposition weaknesses.

The ability to play different types of passes makes Kokcu highly effective, as he can contribute in different situations of play. It also allows him to play different roles within the build-up, with the option to sit deeper and orchestrate the attack or get further forward and between the lines or do a combination of both as he does currently for Feyenoord.

Kokcu isn’t the most active out of possession as shown by the low number of duels he engages in however this doesn’t make him ineffective out of possession. Instead, Kokcu chooses to be more selective in the duels and defensive actions he takes, often contributing defensively with good positioning and reading of the game.  This can often be hard to quantify with data so needs to be looked at to be fully understood.

This example shows a situation where Feyenoord have just turned the ball over and subsequently have a massive hole in their defensive line, the opposition are looking to exploit this with a run into this space.

Kokcu manages to nullify this by following this man in to prevent him from being unmarked in acres of space. He then fills in and makes sure there is still no space for the opposition to exploit.

This may seem insignificant or obvious but making this run into the defensive line has prevented a goal-scoring opportunity for the opposition. This won’t grab headlines or go down as an impactful action on the game but Kokcu quickly identifying the situation and reacting it allowed Feyenoord to come away unscathed.

This analysis takes a deeper look into one of Eredivisie’s best midfielders and some of the attributes that he possesses to make him so effective. We have looked at Kocku both in possession and out of possession while also addressing data and a traditional approach. Kokcu is a talented footballer, especially in possession there are very few who can match his quality in the Eredivisie however his defensive contribution is less impressive but still effective. If Kokcu manages to move he needs to land in the right spot, a team who likes to dominate the ball and doesn’t demand lots of defensive contributions off him. If this is the case then Kokcu can certainly make the next step.