This past Saturday Gerardo Seoane’s Bayer Leverkusen welcomed Marco Rose’s Borussia Dortmund to The BayArena. It was a game where caution was thrown to the wind somewhat with the visitors coming from behind on three occasions before getting the winner to seal an important win early on in the race for the Meisterschale.

This tactical analysis will provide an analysis on the tactics used in this Bundesliga fixture.

Leverkusen lined up in a 4-2-3-1 with Kerem Demirbay used in the double pivot as opposed to in the 10 role. He was joined by Robert Andrich with Florian Wirtz deployed in front of them, meaning Exequiel Palacios was left on the bench with Charles Aranguiz left out entirely due to them returning late from international duty. Otherwise, Leverkusen named an unchanged side from their previous 4-1 victory over Augsburg.

Borussia Dortmund continued with their midfield diamond with late transfer window signing Marin Pongracic coming straight into the starting line-up alongside Manuel Akanji. This allowed Axel Witsel to be deployed as a pivot with Mahmoud Dahoud going into the left midfield position at the expense of Gio Reyna. Julian Brandt also came into the starting line-up, pushing Marco Reus up from the 10 position into a centre-forward spot, with Donyell Malen falling to the bench. 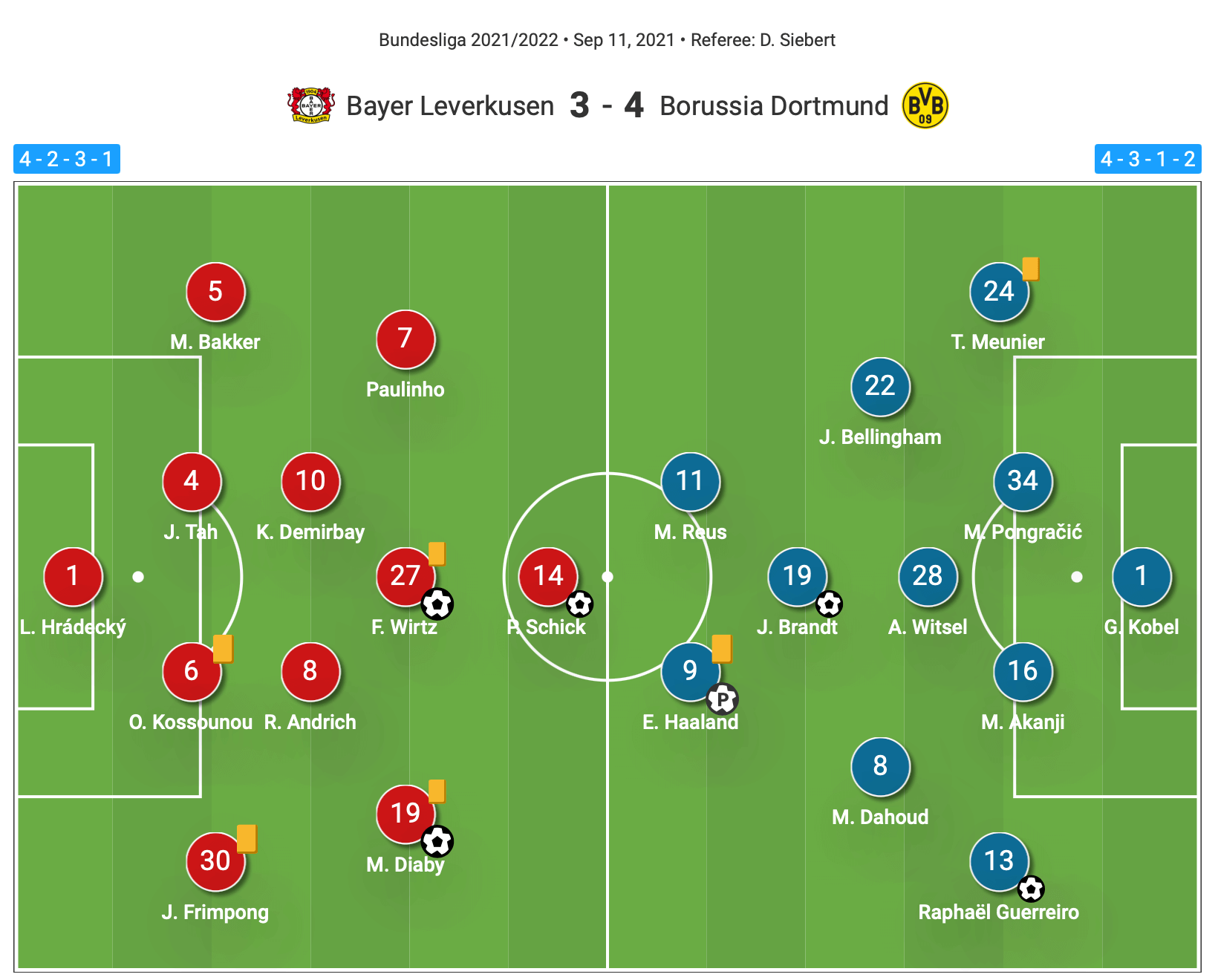 With a midfield diamond, Dortmund naturally maintained a high level of central compactness in attacks. Both Thomas Meunier and Raphael Guerreiro pushed high and wide, with Witsel sitting deep to give protection against the defensive transition, allowing both full-backs to provide height and width.

We can see this pattern in the pass map shown below, which also shows their average position in possession. There is a noticeably high level of compactness shown between Witse (28), Dahoud (8), and Brandt (19), with Bellingham playing wider (22). Reus would drop deeper than Erling Haaland, sitting just ahead of that cluster of midfielders. 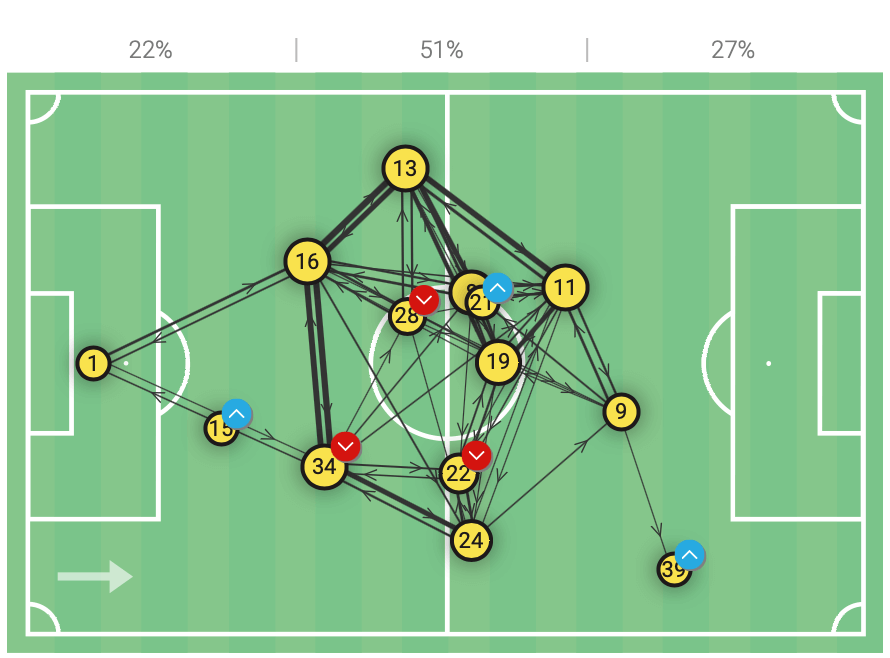 A closer look at Dortmund’s positional attacks over the course of the game show us that they actually had a large amount focused down the right flank, but as we can see there was a lower cumulative xG emanating from these attacks. However, despite five fewer positional attacks coming through the central channel, there was a higher xG value from these. 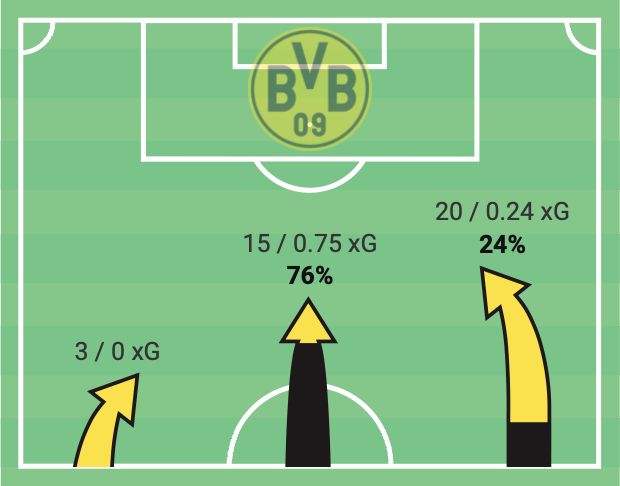 With the width coming from the full-backs, Dortmund’s midfield four and attacking duo were able to overrun the central channel. We can see this below, as Haaland stays high. With the Norwegian forward’s considerable threat in behind, his positioning on the last line of the defence prevented the defence from being able to step forward and engage Dortmund’s midfield, leaving a 5v3 overload in favour of Dortmund in the midfield. 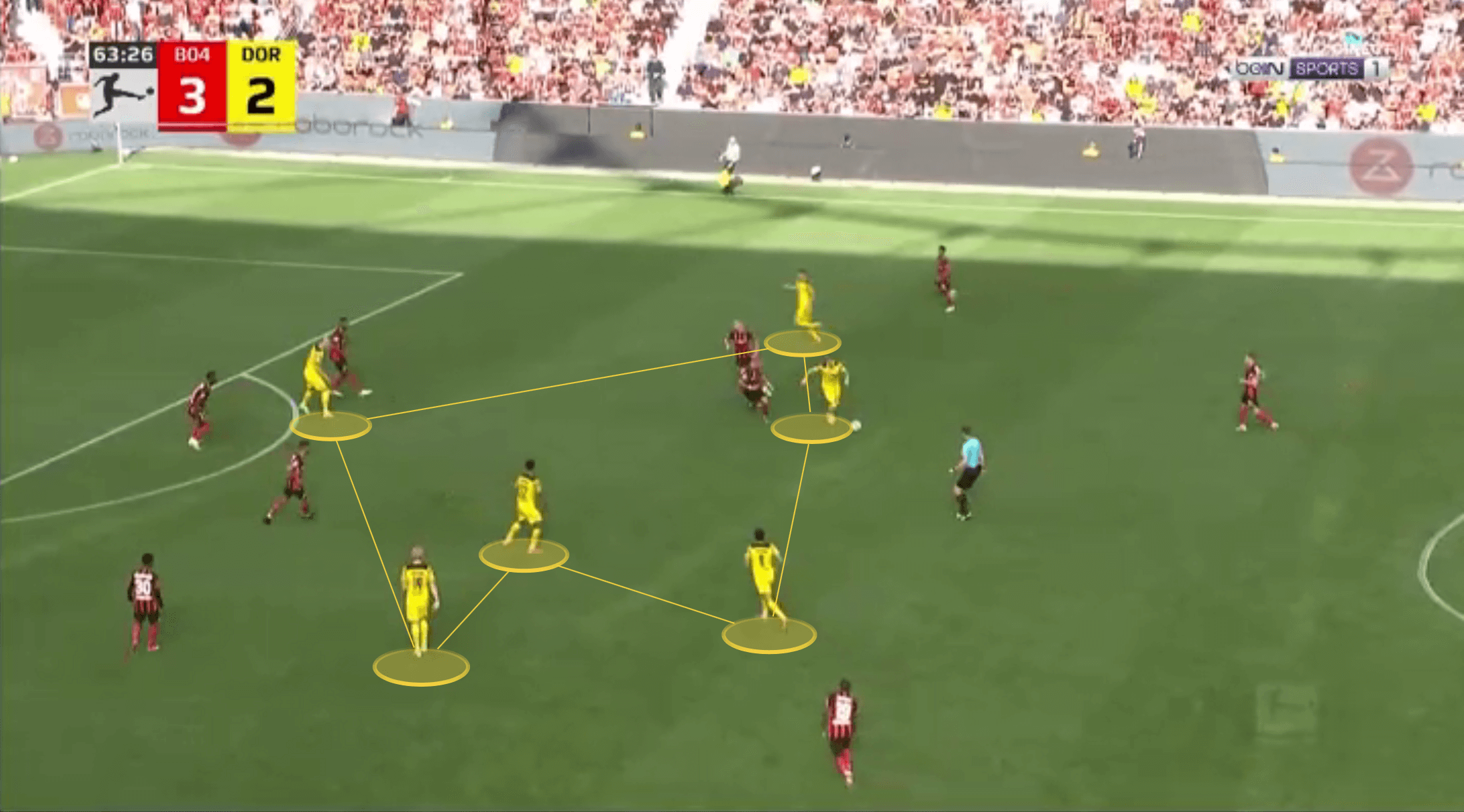 The Leverkusen wingers could tuck inside, but then either of Raphael Guerreiro and Meunier on either wing would have plenty of space to operate.

Quick interchanges between the midfield and attack

Dortmund’s central compactness allowed for rapid-fire passing exchanges between their attackers, with Brandt working close to both Reus and Haaland. Any forward receiving a forward pass was instantly surrounded by the second attacker and at least one more midfielder. We can see this below as the long ball is played forward to Reus, who offloads the ball to Haaland with Brandt moving down the outside. 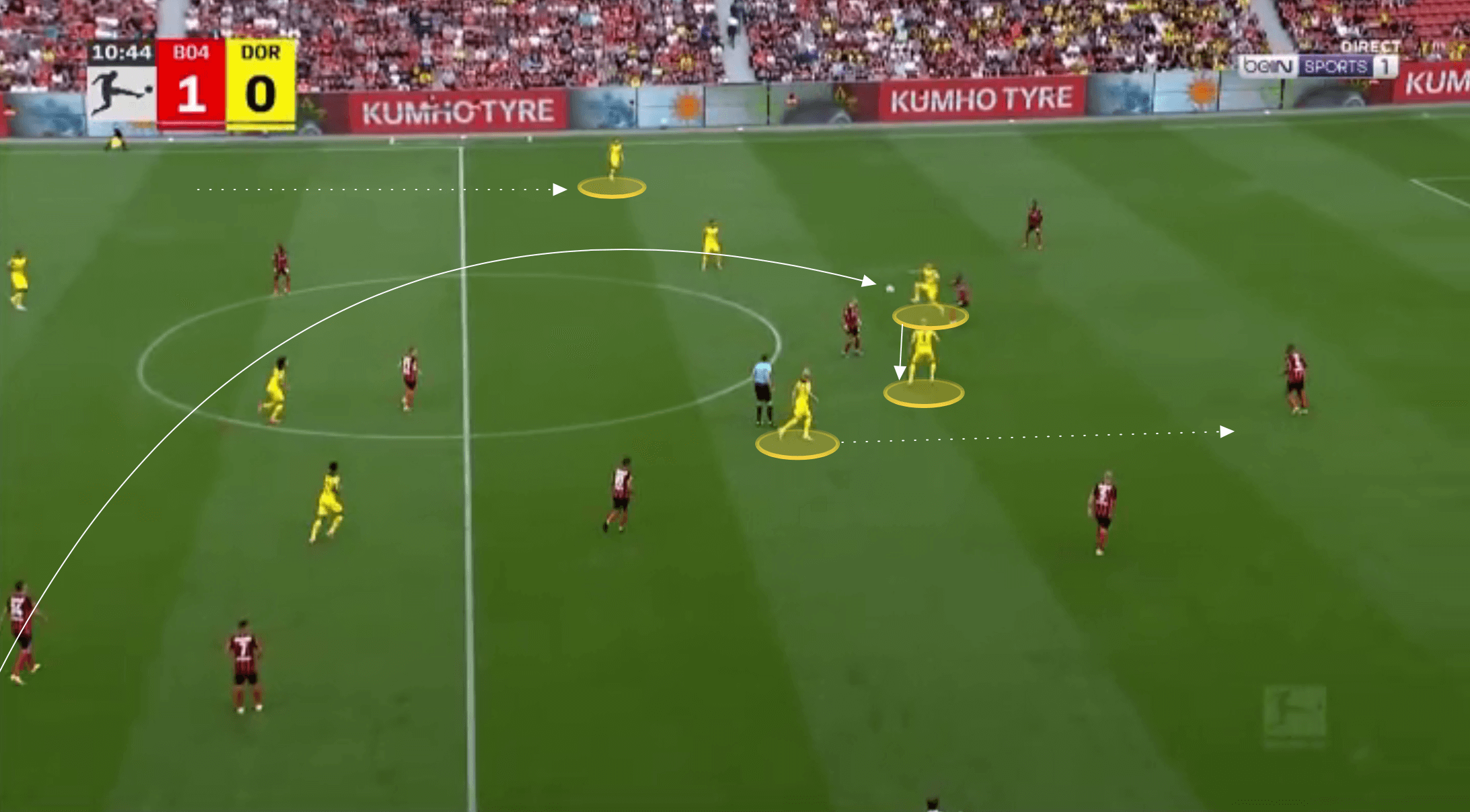 Reus receiving this pass with two attackers so close to him meant that Dortmund could also overload the centre-back duo. Reus was able to draw Leverkusen’s right-sided centre-back Odilon Kossounou forward in this instance with Haaland’s direct run and Brandt’s third-man run on the outside creating a simple but effective overload on Jonathan Tah. 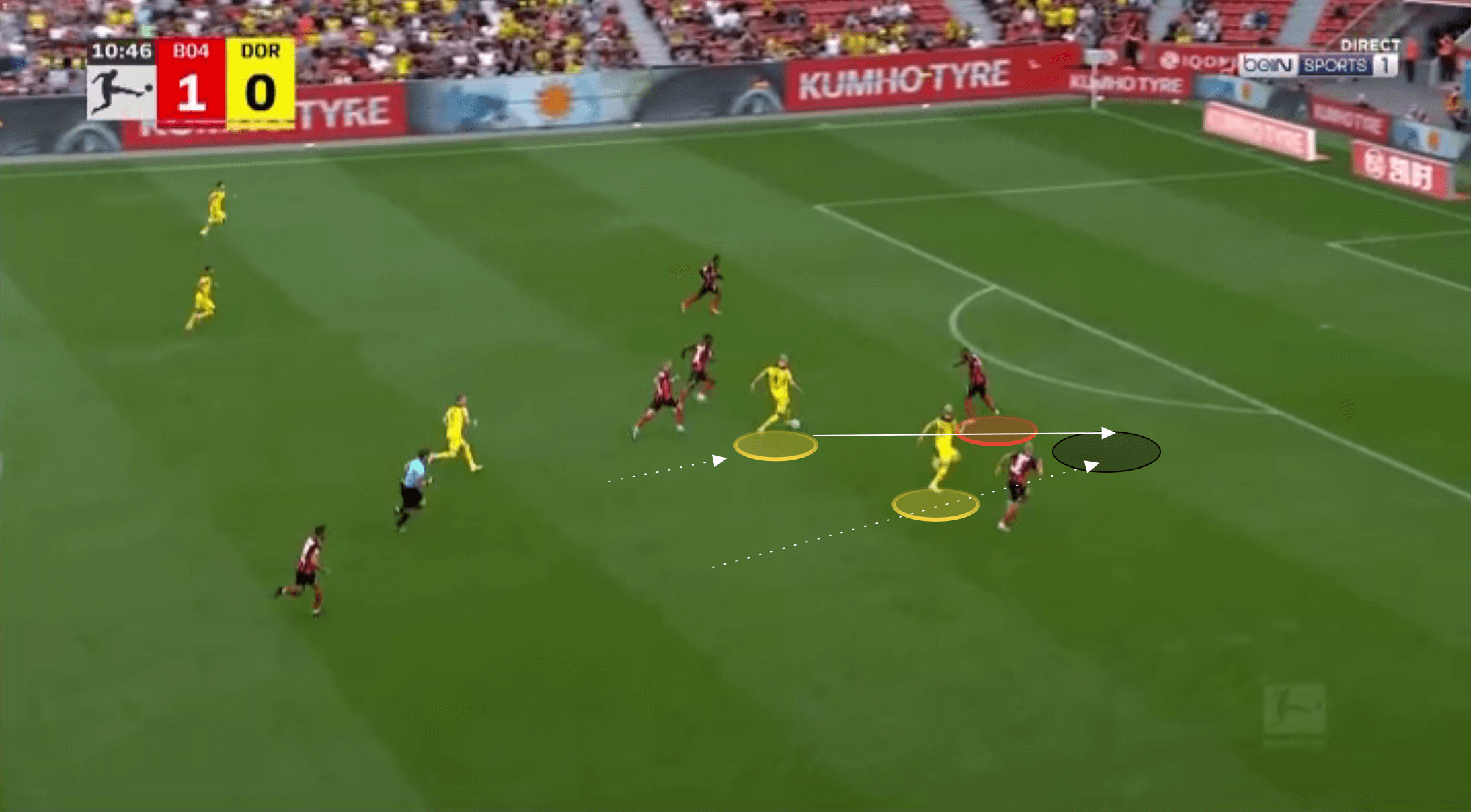 With such a high number of attackers playing within the space of each half-space the Leverkusen defence were naturally drawn tighter. However, the slightest movement out wide from an attacker could have the impact of drawing a Leverkusen defender out with them.

This pattern can be seen over the following two images. As Raphael Guerreiro plays the pass inside, Brandt drifts slightly wide. 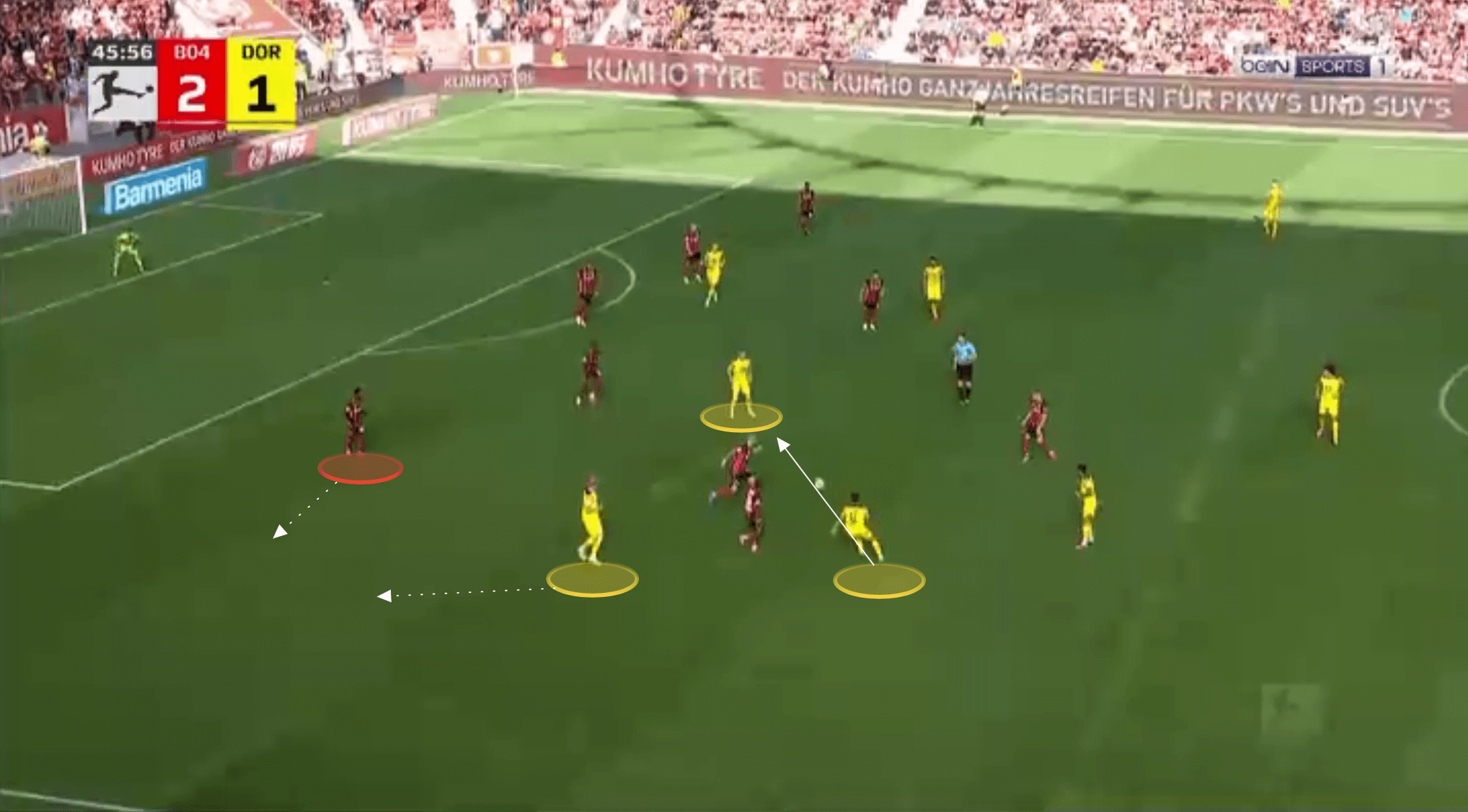 Brandt is then found with the pass by Reus, and this fully engages Leverkusen’s right-back Jeremie Frimpong. As a result, a space opens up between Frimpong and his inside centre-back, providing enough space for Raphael Guerreiro to cut inside and receive the pass in the highlighted space. 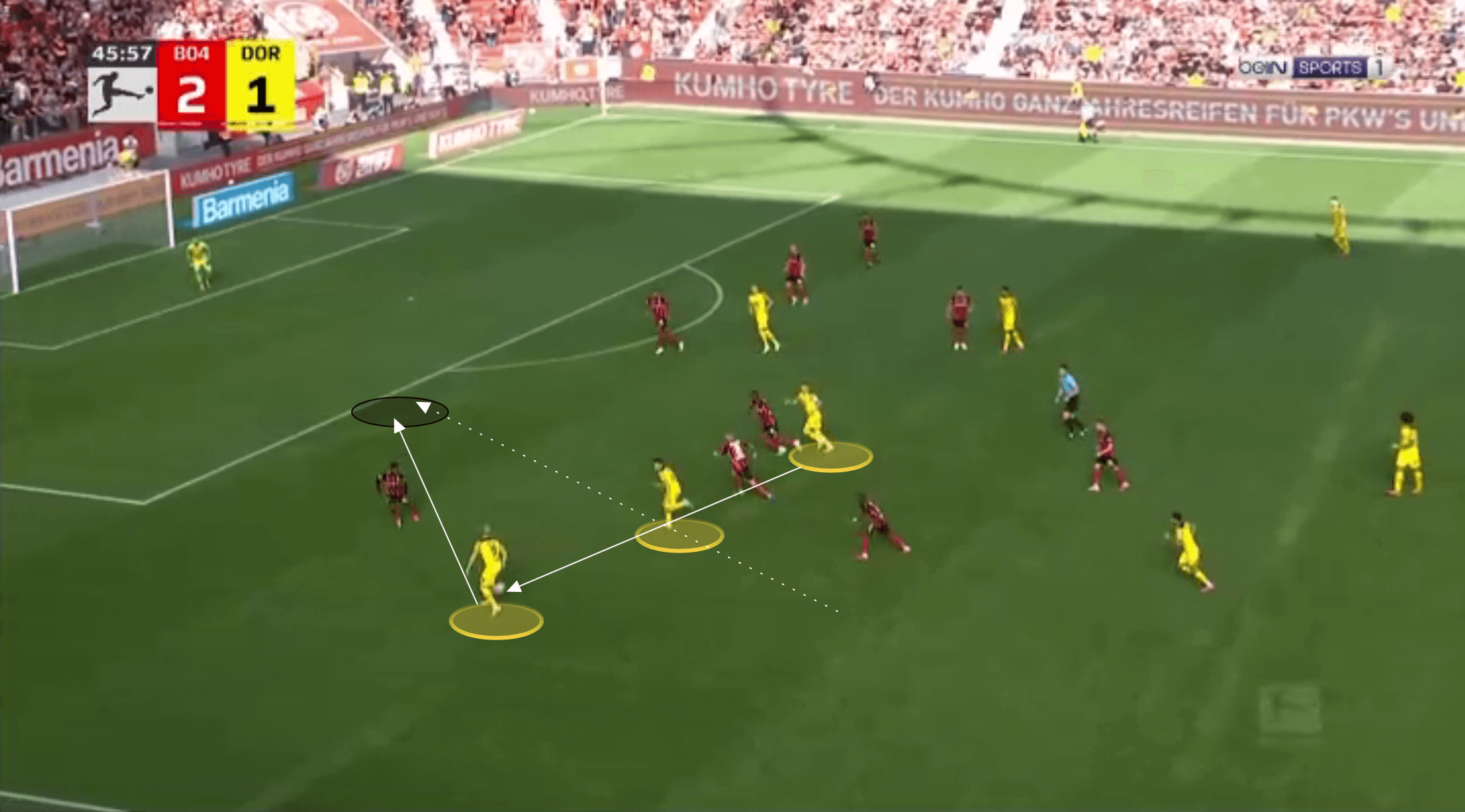 A pattern of similar principle can be seen in the next example, occurring only a matter of minutes after the previously shown example.

Meunier has the ball in this instance, this time on the right side, and as a result he draws left-back Mitchel Bakker away from the defence. The pass inside finds Haaland, who in turn can play in Brandt who fills the gap between Tah and Bakker. Whereas in the previous example Raphael Guerreiro couldn’t find the back of the net, Brandt was able to take advantage of this attack, bringing Dortmund level at 2-2. 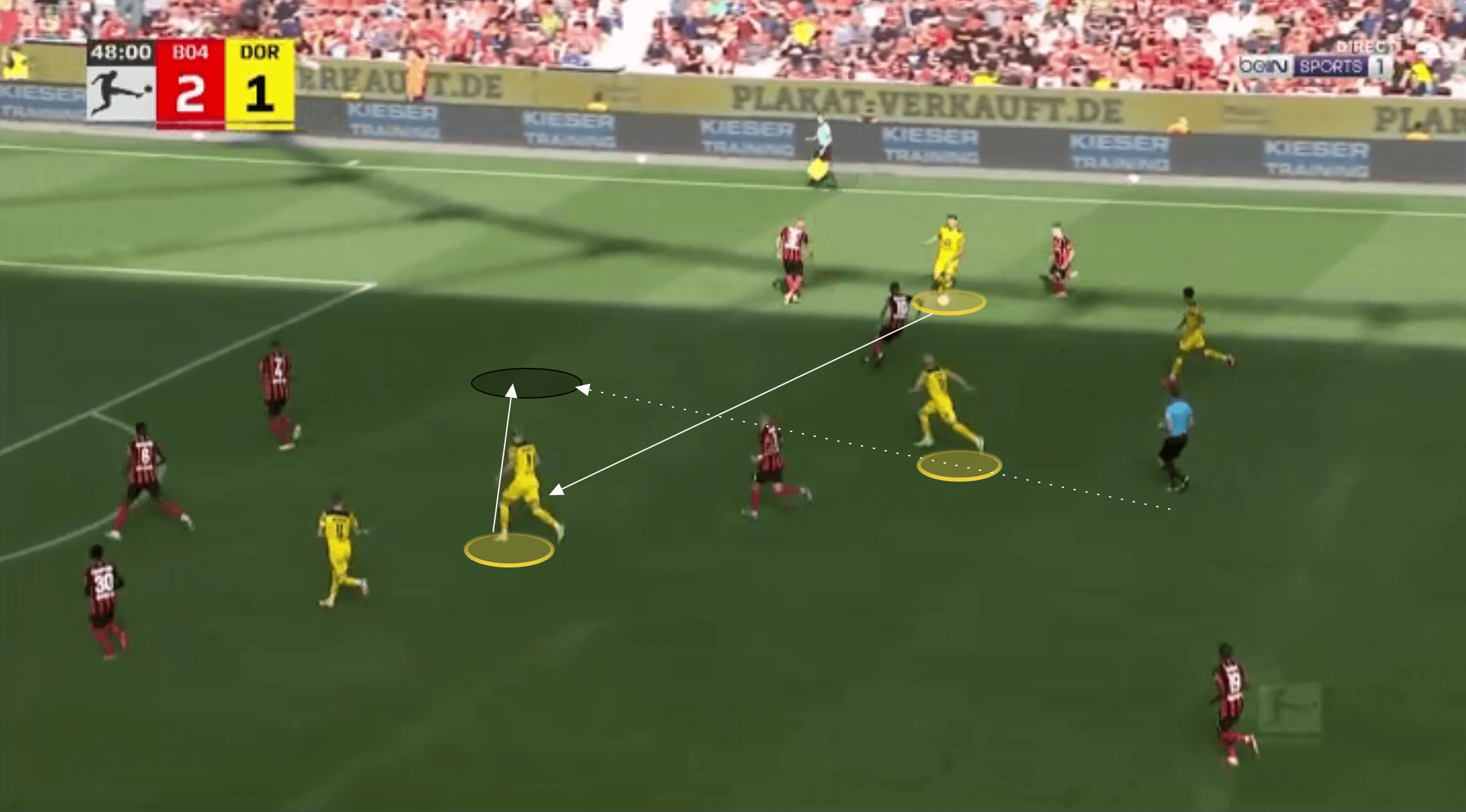 The home side were happy to leave Dortmund to have the bulk of possession, with Leverkusen having 42.67% of the ball on the day. Dortmund had more chances, with 14 shots, but Leverkusen’s 11 shots on goal was certainly respectable given a significantly lower share of possession.

Admittedly, the quality of chance paled in comparison to Dortmund with a 0.92xG for Leverkusen and 2..39 xG for Dortmund (including the penalty).

A fair share of Leverkusen’s shots came from outside the area, with Mousa Diaby’s goal coming from the edge of the area. Nevertheless, their high number of shots from further out would go some way to explaining their lower xG. 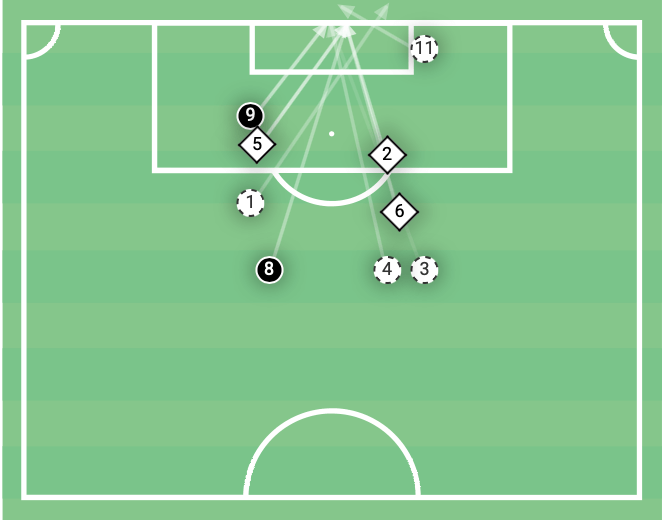 Still, they were consistently dangerous and may feel hard done by not to have come away from the game with a point.

They were able to provide this legitimate goal threat against Dortmund through their terrific work on attacking transition, combined with some clever pressing in moments.

They were aggressive with their press, pushing players high and wide, whilst still maintaining a compactness throughout. We can see this in the image below with three Leverkusen players in close proximity to the ball as Dortmund look to play out wide on the left channel. 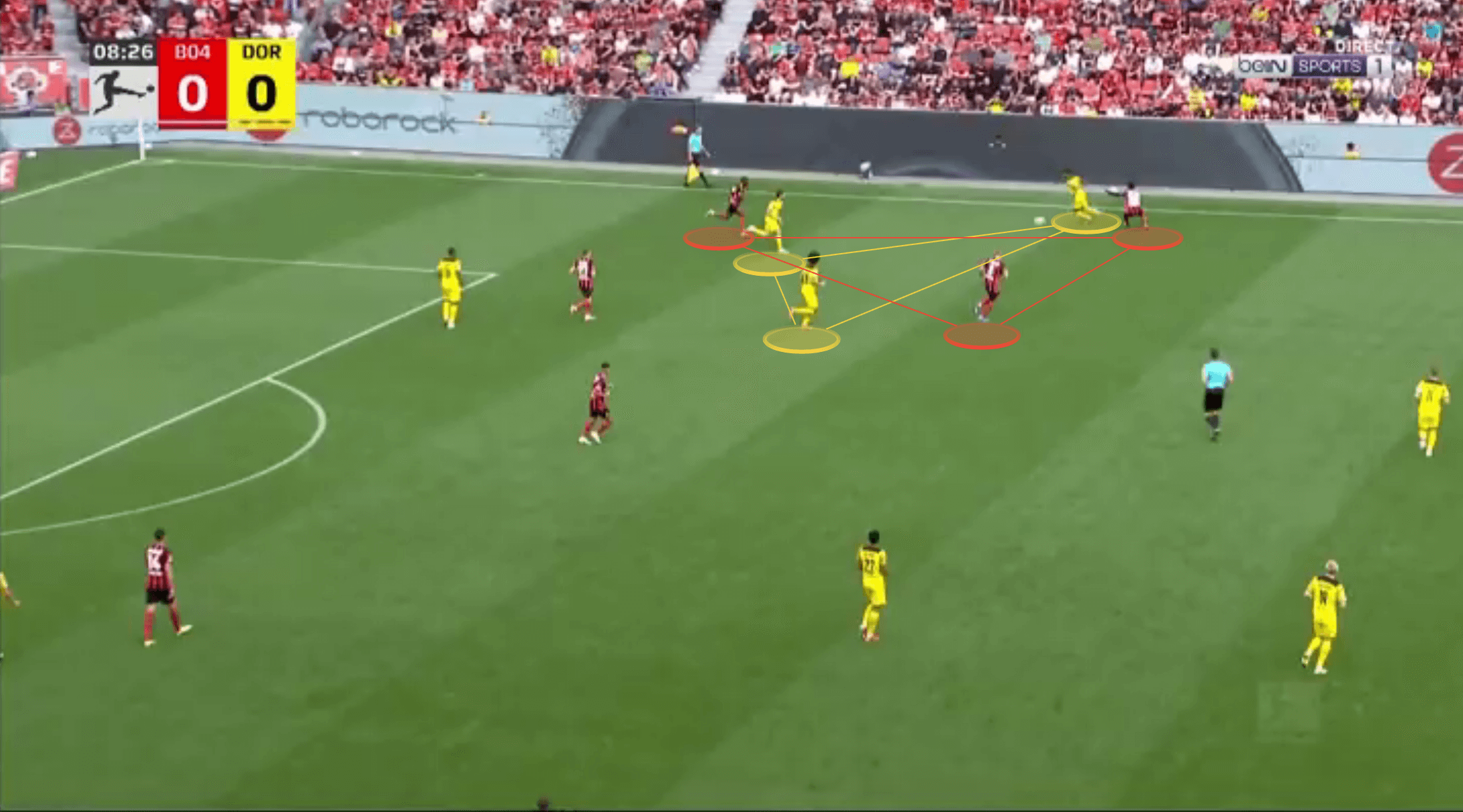 A sloppy pass played inside as a result of this pressure and Leverkusen immediately were able to play a quick one touch pass away from Dortmund’s counter-press, and begin their counter-attack immediately, within 30 yards of goal. 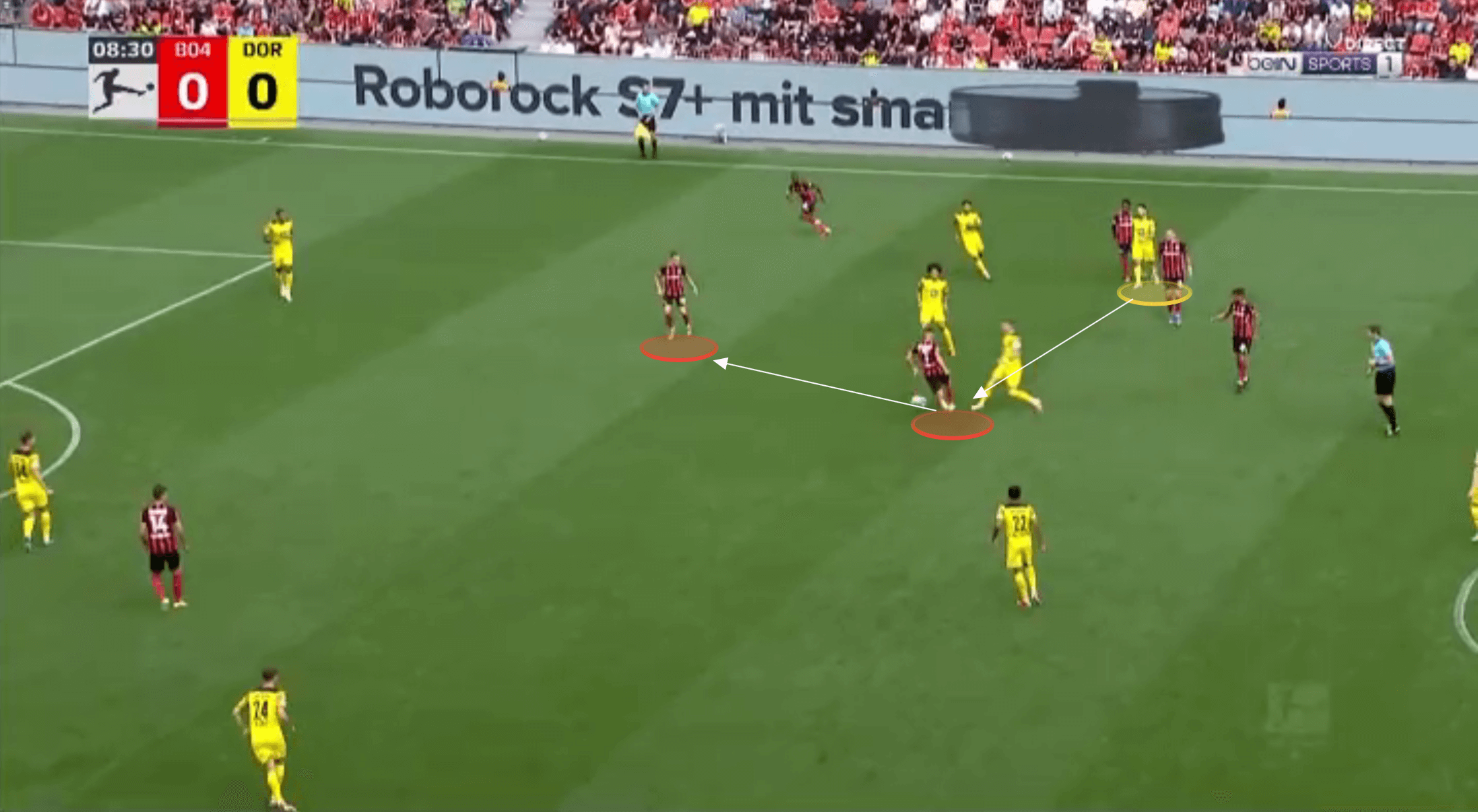 Leverkusen worked hard as an entire defensive unit over the course of the game, doing a stellar job of not only ensuring there were players around the ball to provide pressure, but also to ensure the counter-attack already had a structure in place to allow them to break quickly and retain possession too.

Below there are five Leverkusen players surrounding the ball, isolating the ball-carrier. Patrik Schick’s positioning is key in this with him at the top of the highlighted diamond. 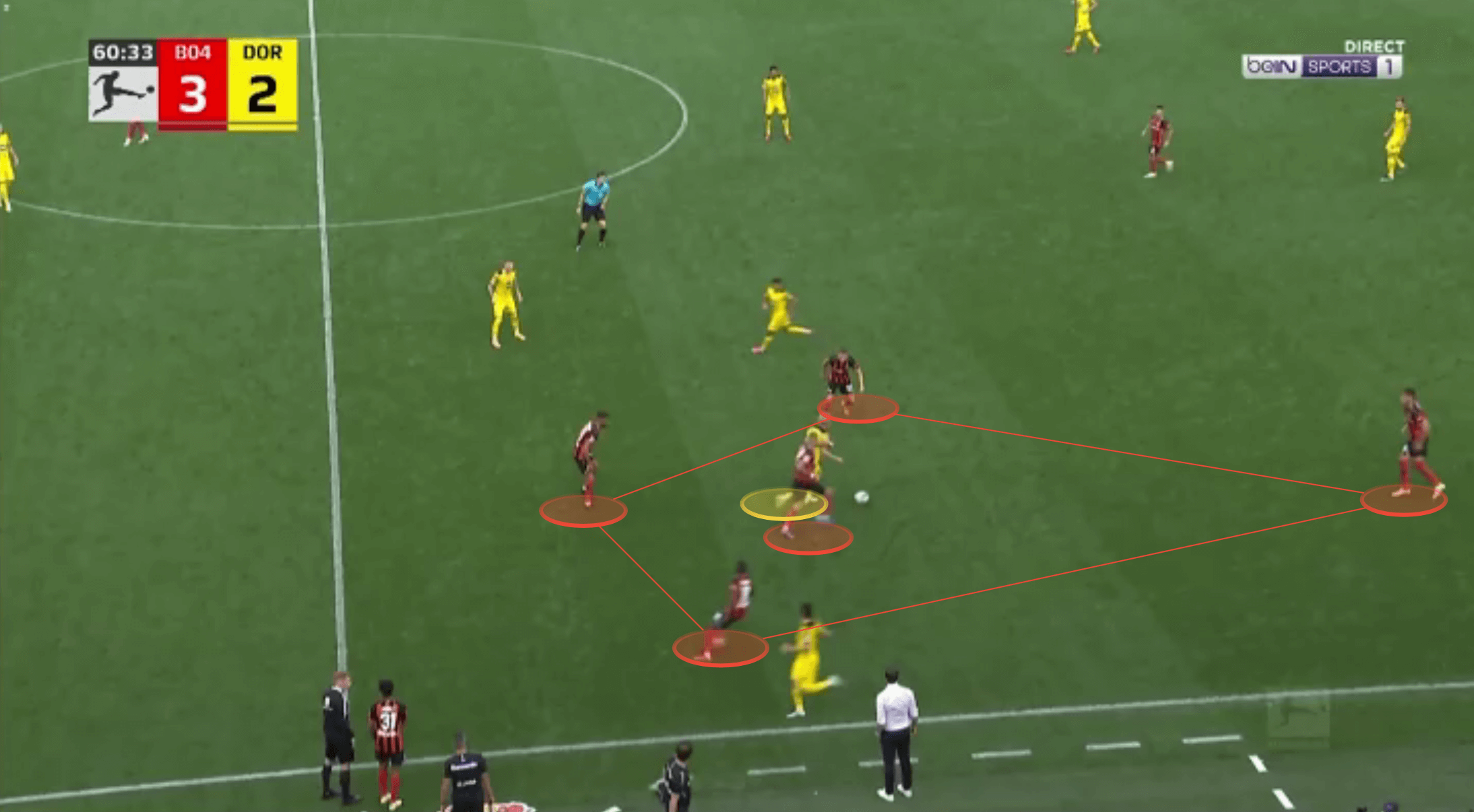 As soon as the ball is won back, Schick instantly makes himself available and plays a first-time pass as he’s found, to his onrushing teammate. The speed of this interchange not only stopped Dortmund from successfully counter-pressing but allowed Leverkusen to counter-attack quickly. This was a common theme throughout the game, with two of Leverkusen’s goals coming through the pace of their transition game. 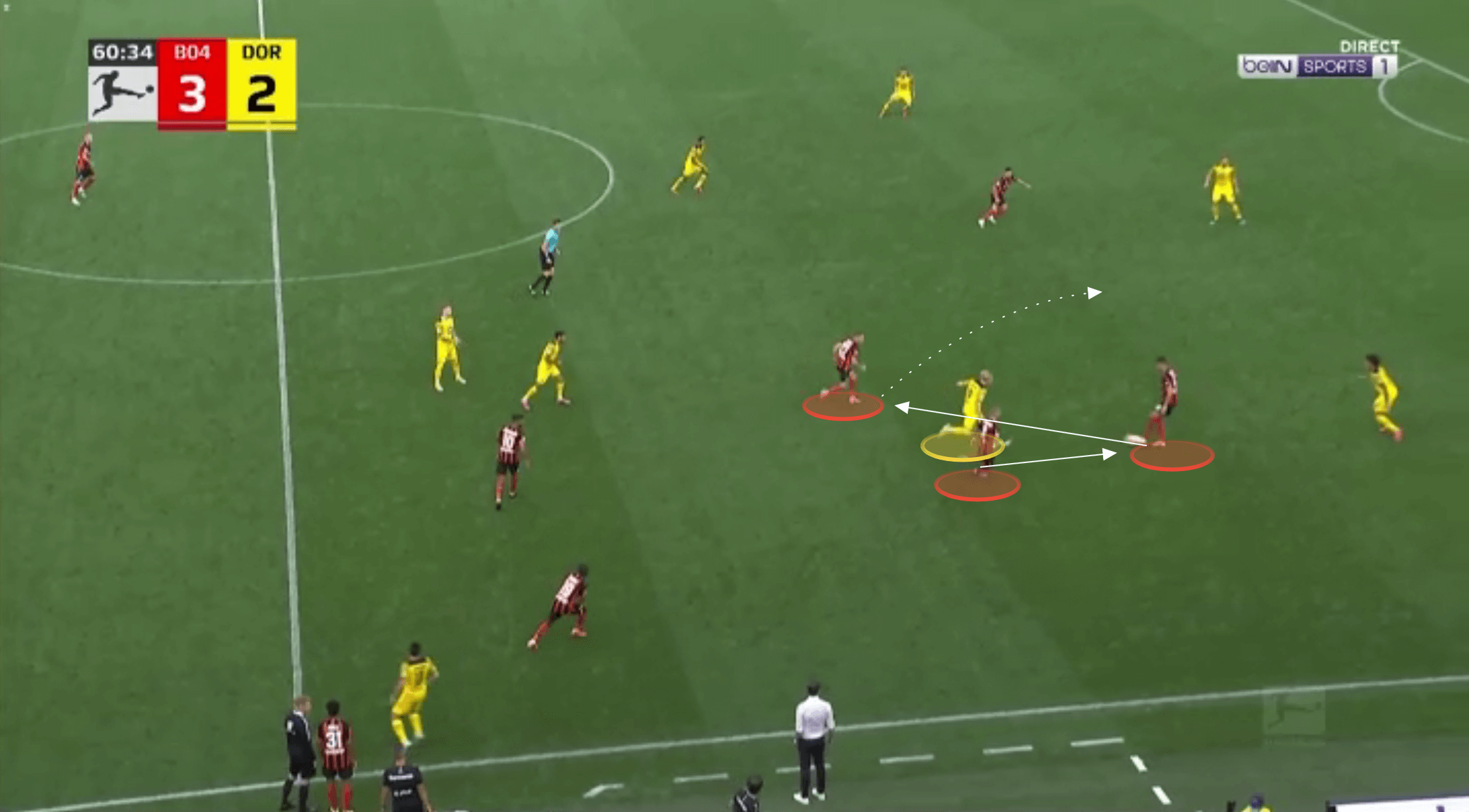 As much as they were a threat when winning the ball in high areas, the pace at which they were able to move the ball forward from well inside their own half should be noted too.

Again, just as Schick did previously, the players ahead of the ball were consistently alert to the turnover of possession and ready to combine in tight spaces with those around them.
Passing patterns like the one shown in the next image were a key component of breaking away from the Dortmund counter-press. 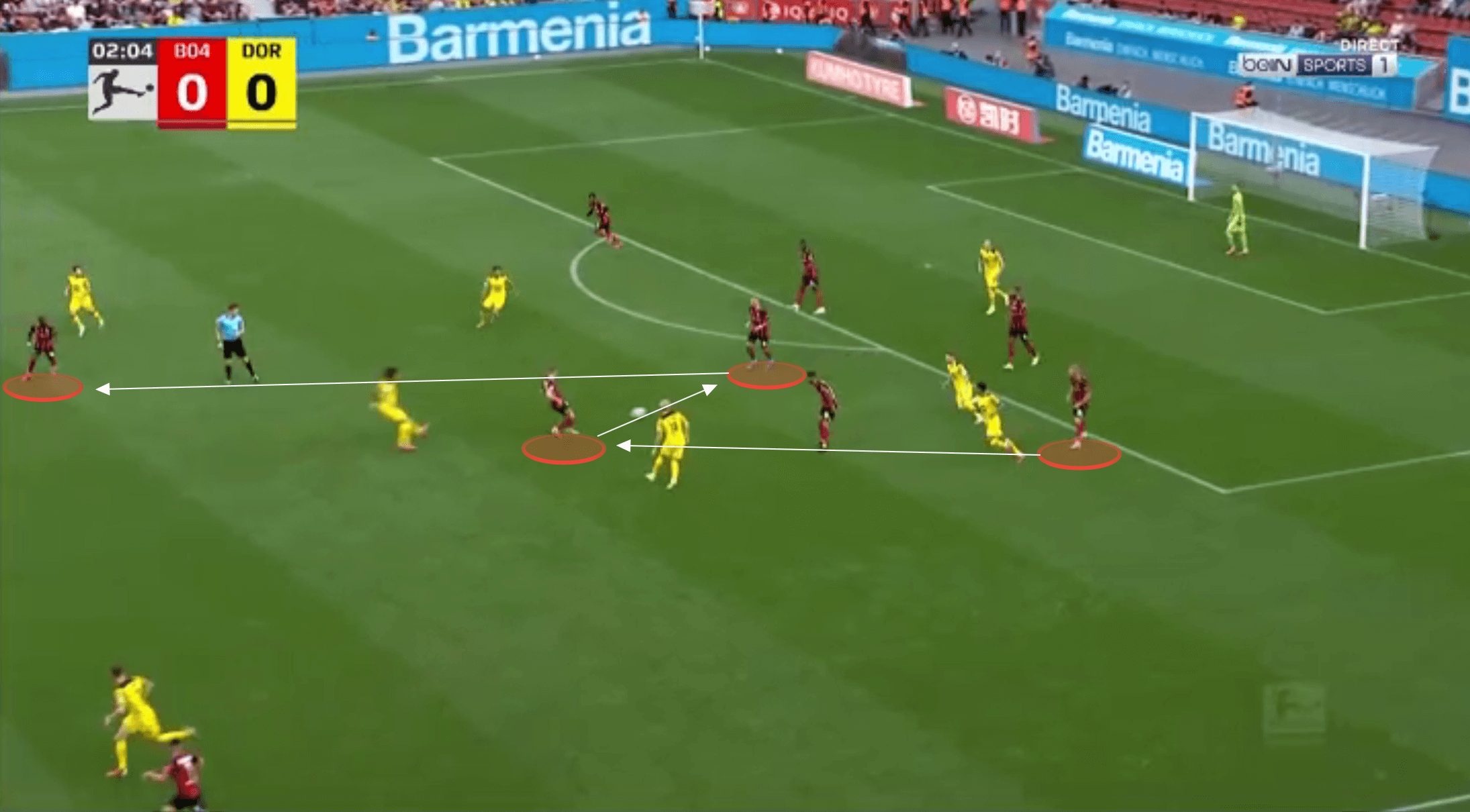 These quick passing exchanges allowed Leverkusen to take out a high number of Dortmund’s attacking and midfield units in one swift move too, with the above example showing them removing seven players as they broke forward.

As a result, they were able to create significant overloads on the counter-attack, with the pace of Diaby, Wirtz, and Paulinho ensuring Schick wasn’t left isolated. Schick’s movement in this passage of play was excellent in creating space for Wirtz as he drove forward in support of the ball-carrier Diaby. Schick made his run wide, allowing Wirtz to fill the central space, with Paulinho’s high positioning on the left-flank pinning back Dortmund’s defence and leaving this central channel wide open for the counter. 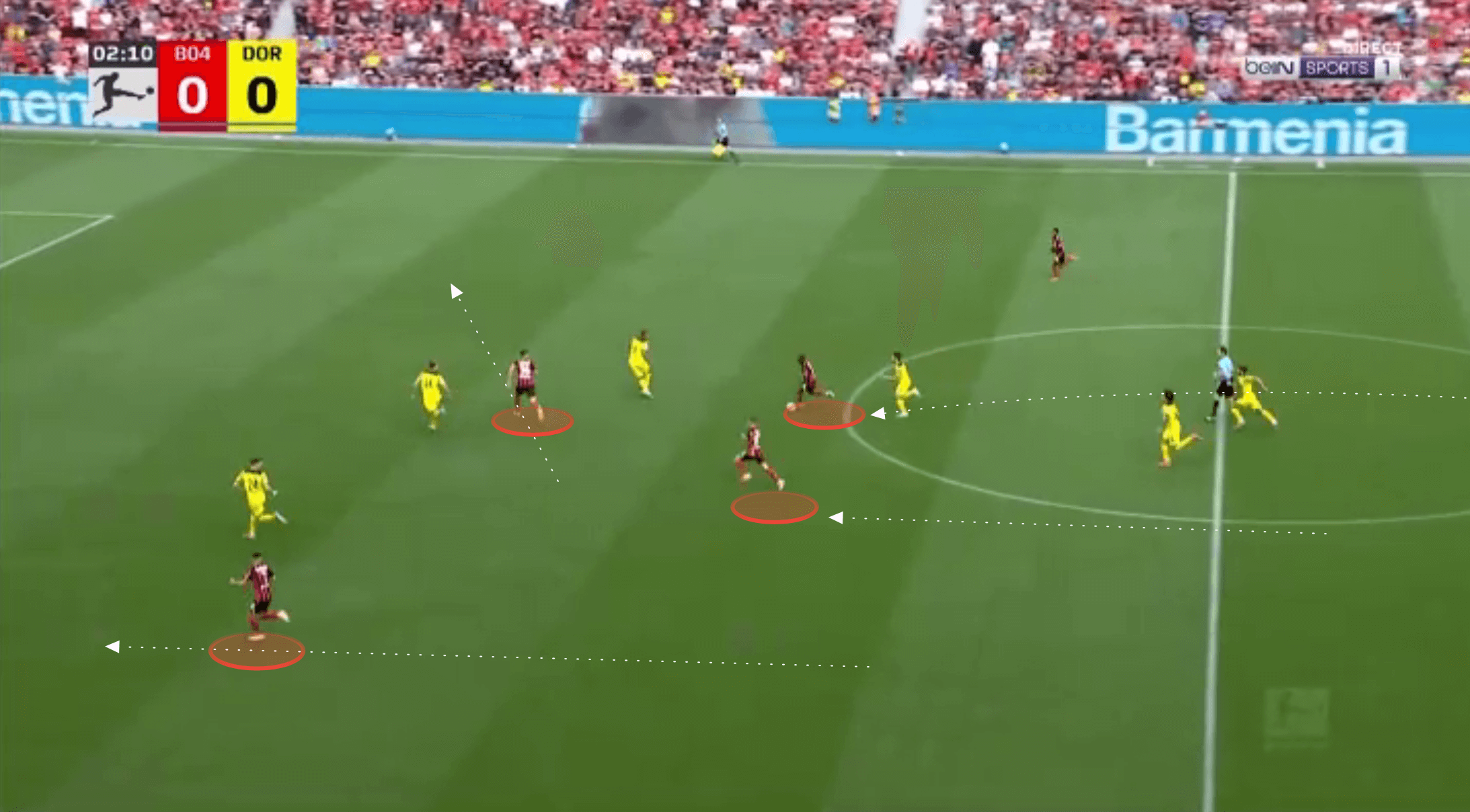 In general though, Leverkusen’s attacking group around Schick were excellent at pushing forward quickly in support of the forward as soon as the ball was won back – and they frequently looked to get it forward as soon as possible, with 12.6% of their passes over the course of the game being long passes. 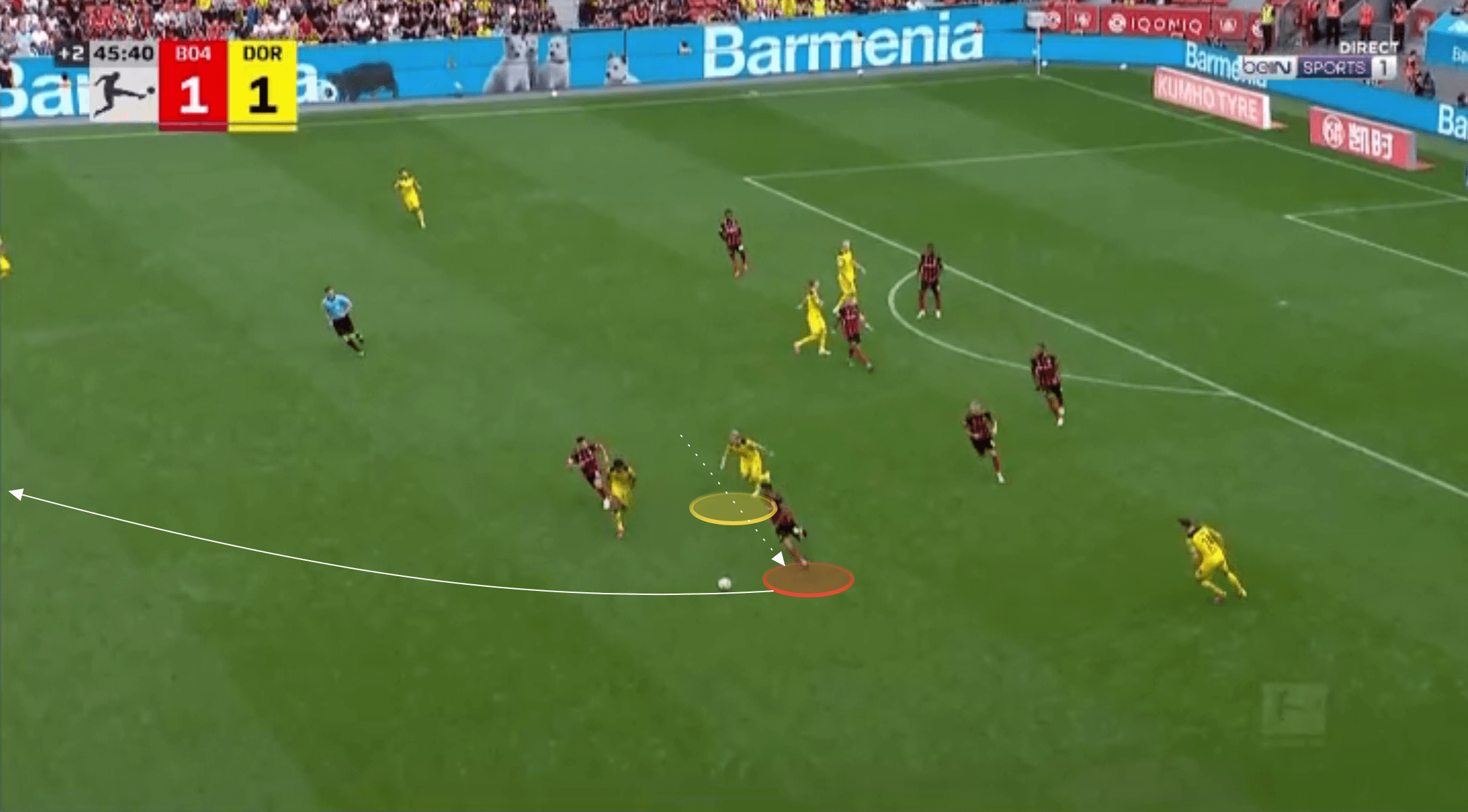 What could have started off as a standard situation with Schick staying high and Dortmund leaving two centre-backs to cover him, could quickly become a 3v2 with the pace of the attacking group around him perfectly suited to counter-attacking football. The dispossession and quick forward pass played into Wirtz in the previous image, set up Leverkusen’s counter just before the half, where Schick was played in behind and finished to the far post. 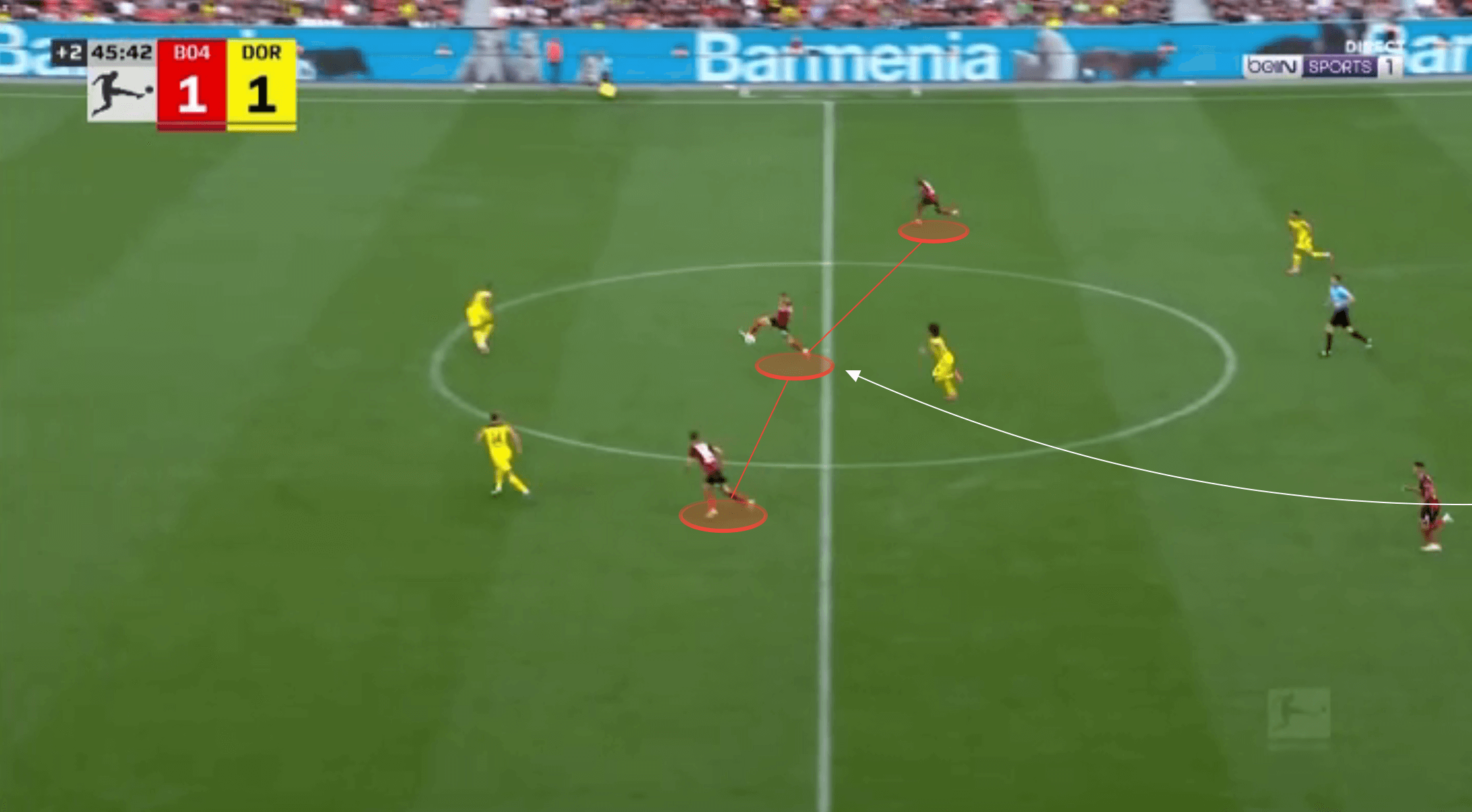 This weekend’s game between these two sides was most definitely a game for a neutral to watch and enjoy but is unlikely to have too many of their rivals in the top half of the table worried about either side’s defensive work. Dortmund in particular will be disappointed to continue with a leaky defence despite the introduction of new signing Pongracic.

Nevertheless, the attacking prowess of each side will have sides a little more concerned. Over their next four league games, Leverkusen will face Stuttgart, Mainz, and Bayern Munich, and so will have a greater idea of their potential for this season, whilst in the same time period, Dortmund will play Mainz too, but also Monchengladbach, Augsburg and Union Berlin, and will no doubt feel confident they can continue scoring goals at the rate at which they have thus far.