Malmo FF hosted IK Sirius at Stadion last Sunday, thrashed the guests by putting four goals past Jonathan Viscosi. Finally, the Allsvenskan title returned to the South as Di blåe are now the Swedish champion. The home side has killed the game very early, Anders Christiansen, Ola Toivonen and Isaac Kiese Thelin all scored to create a three-nil lead. Sirius could not resist or threaten the opponents in this game.

This tactical analysis is a summary of the pressing and build-up plays of both teams and how they adapted under different circumstances.

Malmö have been rotating the team because of the tight schedule, but the key players all started in this important game. Søren Rieks returned to the starting lineup – Adi Nalic stayed on the bench and came on as a substitute in this game.

Sirius were without some first team players in this game, including Adam Hellborg and Girmai Nahom Netabay at the midfield. Therefore, two youngsters started in this game – Laorent Shabani as the right-winger and Jamie Roche as Elias Andersson’s partner.

Sirius have designed a pressing scheme for this game, mainly in a 4-3-3 shape, using Yukiya Sugita, Mohamed Saeid plus a winger to form the pressing block. Facing an opponent that plays out from the back liked Malmö, they pressed a lot to try pressuring the backline, hoping to force some guided long balls or even steal the ball high.

Sugita and Saeid must collaborate with each other when initiating the press. When one of them pressed a centre-back, the other one should cover the nearest supportive midfielder at the second layer. For example, Sugita was approaching Lasse Nielsen below, so Saeid went for Erdal Rakip. However, the remaining centre-back would be left without control. Usually, this required the winger in the same vertical half to close the centre-back, even at the expense of leaving the full-back free.

Since Malmö stretched the pitch very big, it was very difficult to defend large areas when keeping the backline behind the halfway line. Even though Sirius players curved the runs during the press, the options were still available because of spaces available. 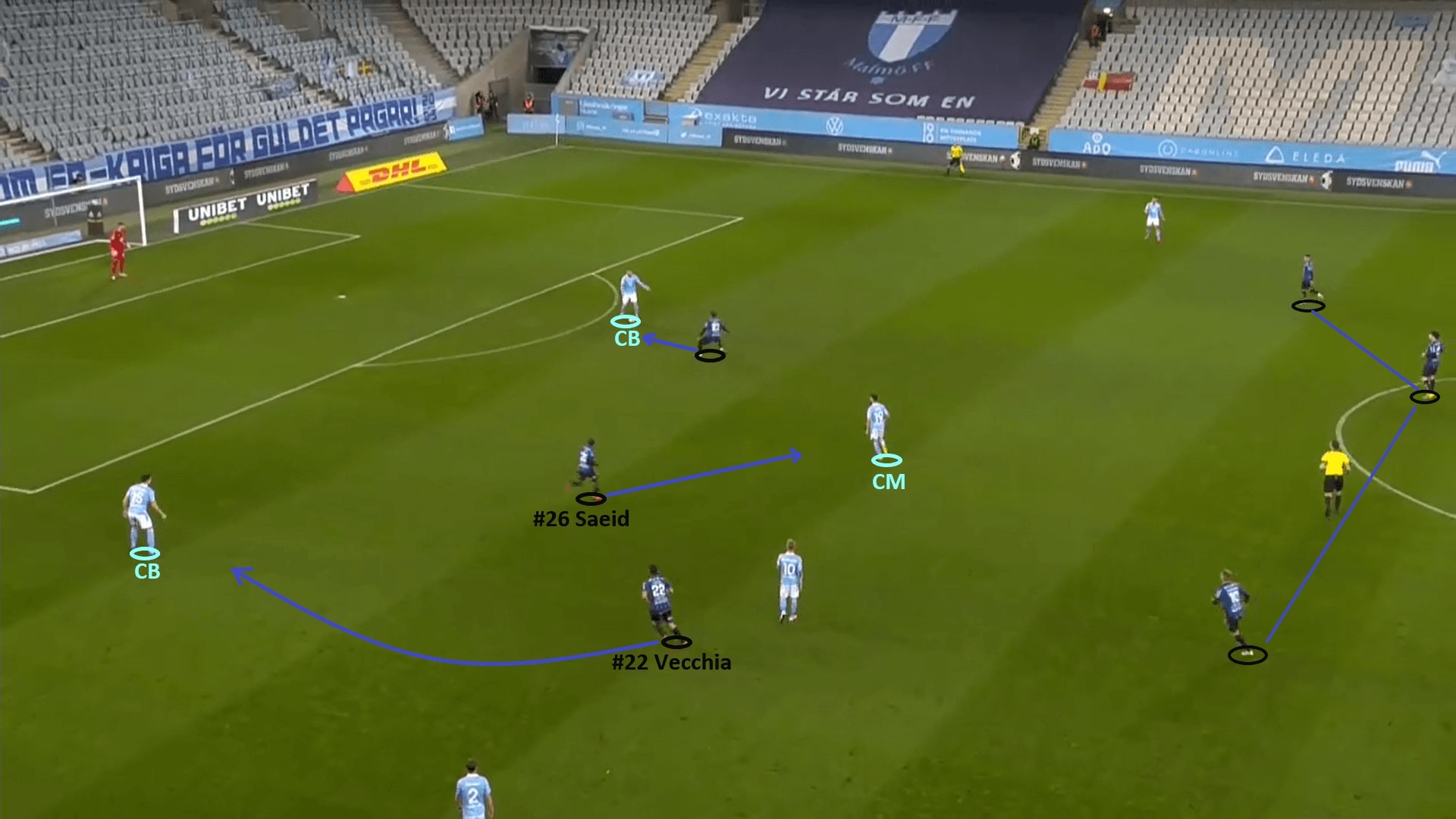 Another example here. In this game, the press initiator was not curving his run a lot. This could reduce the distance to access the target while sprinting. The underlying issue would be the limited controlled option was narrowed to two, a centre-back and a midfielder. Sugita is now closing Anel Ahmedhodzic, Saied has chosen to press the midfielder too early, even the former Nottingham Forest centre-back was yet to pass.

Consequently, Christiansen was the unmarked player, requiring Stefano Holmquist Vecchia to leave the right-back and pressed. In those cases, the receiver still has a lot of time to adjust their suboptimal body orientations, hence, uneasy to steal the ball from the blindside. Vecchia must curve his run in this case shadow the passing lane to the right-back.

Midway through the first half, Henrik Rydström instructed the full-backs to step up earlier as the solution to cover spaces behind the wingers. 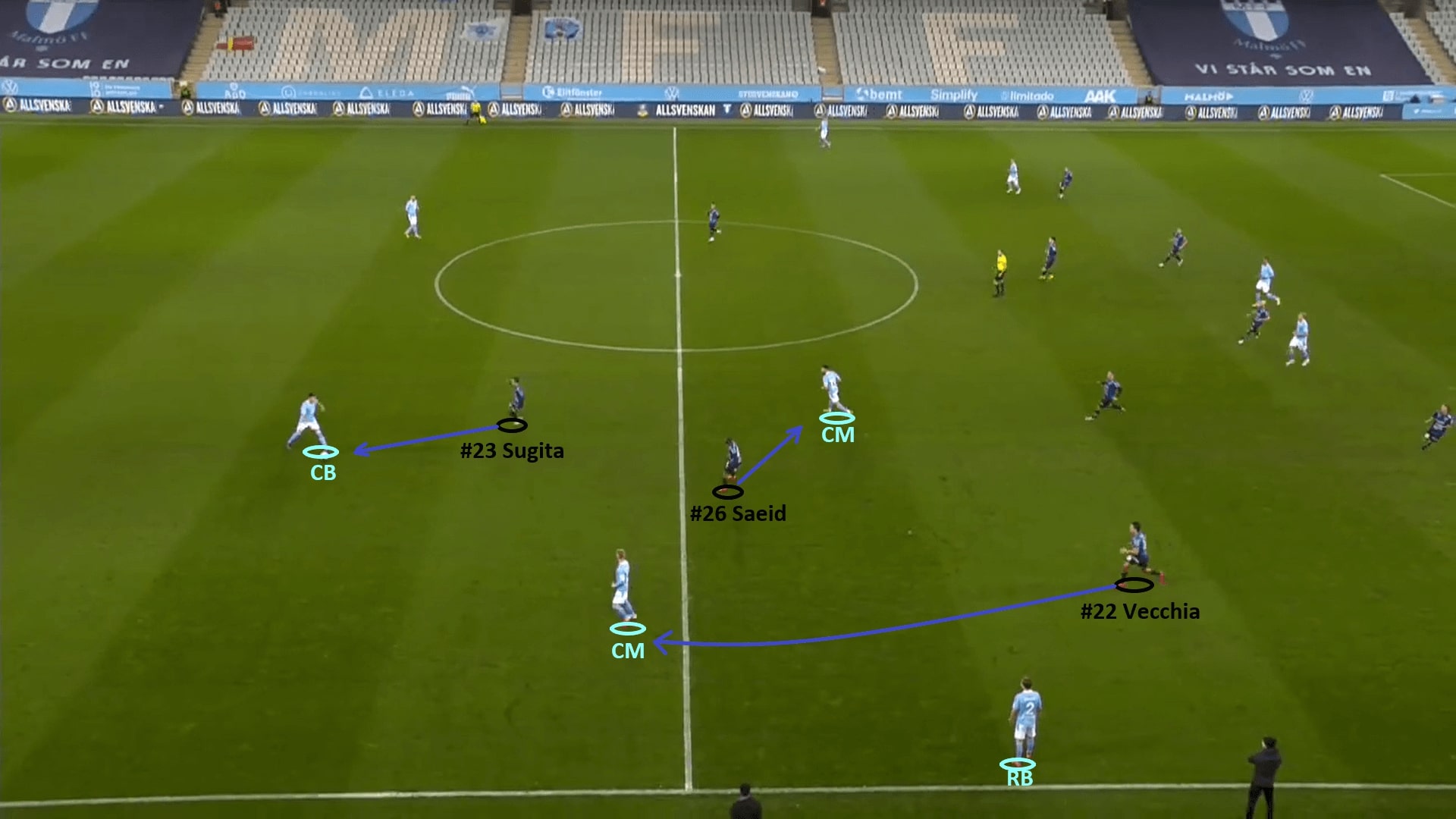 In addition to the above analysis, Malmö did very well to eliminate the press of Sirius on most occasions. Apart from using a pair of wide full-backs to make the pitch as big as possible, their passes at the backline were so confident to circulate, even using a lofted ball to switch the attacking focus.

Another issue of Sirius was vertical compactness as the block was torn apart during the press. It was a pressing three, and another midfield three apart (a 4-3-3). Therefore, the attacking team could bypass the defensive lines one by one as the layers were not supportive of each other. Again, Sirius could not limit the options or pressure the ball enough because of defending in huge areas in the below scenario.

Malmö fully utilized the opened structure in this game, always quickly switching the ball to free spaces. In this case, when the Sirius frontline committed themselves in one vertical half, Larsson lofted the ball to Nielsen, who was in another half. Furthermore, Malmö could progress at this flank by creating a numerical overload on Shabani. 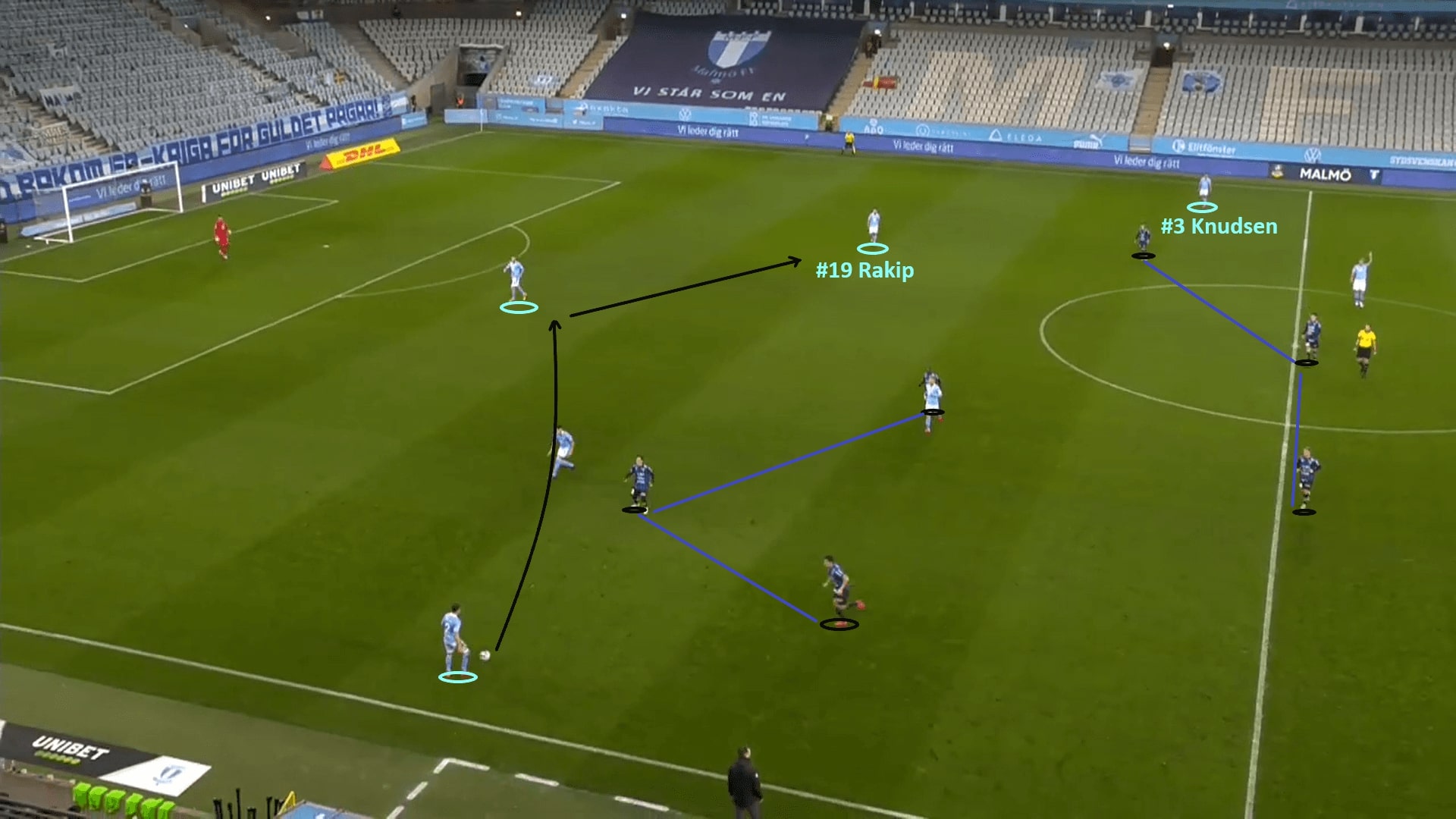 Apart from quick and direct plays during the transitions, Malmö also used the inside-out-inside pattern a lot to develop an attack. The concept was using a pair of inverting wingers to create a central overload or manipulating the width of the defence, opening the wide zones for the full-backs, especially Larsson on the right.

The likes of Toivonen and Jo Inge Berget always moved into the centre, opening passing lanes behind the opposition midfield duo, creating vertical options for the build-up players. Because of these additional men at the centre, Sirius players were forced to stay tight at the same vertical zones. The below scenario shows the left-winger (Rieks), striker (Toivonen) and right-winger (Inge Berget) all staying closely to support each other.

The pattern was Inge Berget-Toivonen-Larsson-Rieks; Toivonen would be the key to suddenly appear from the blindside of the midfielders to receive the ball. The former Sunderland and Toulouse man often thinks quick to decide the next move, helping the team to speed up and attack quickly once bypassing the first line of pressure. 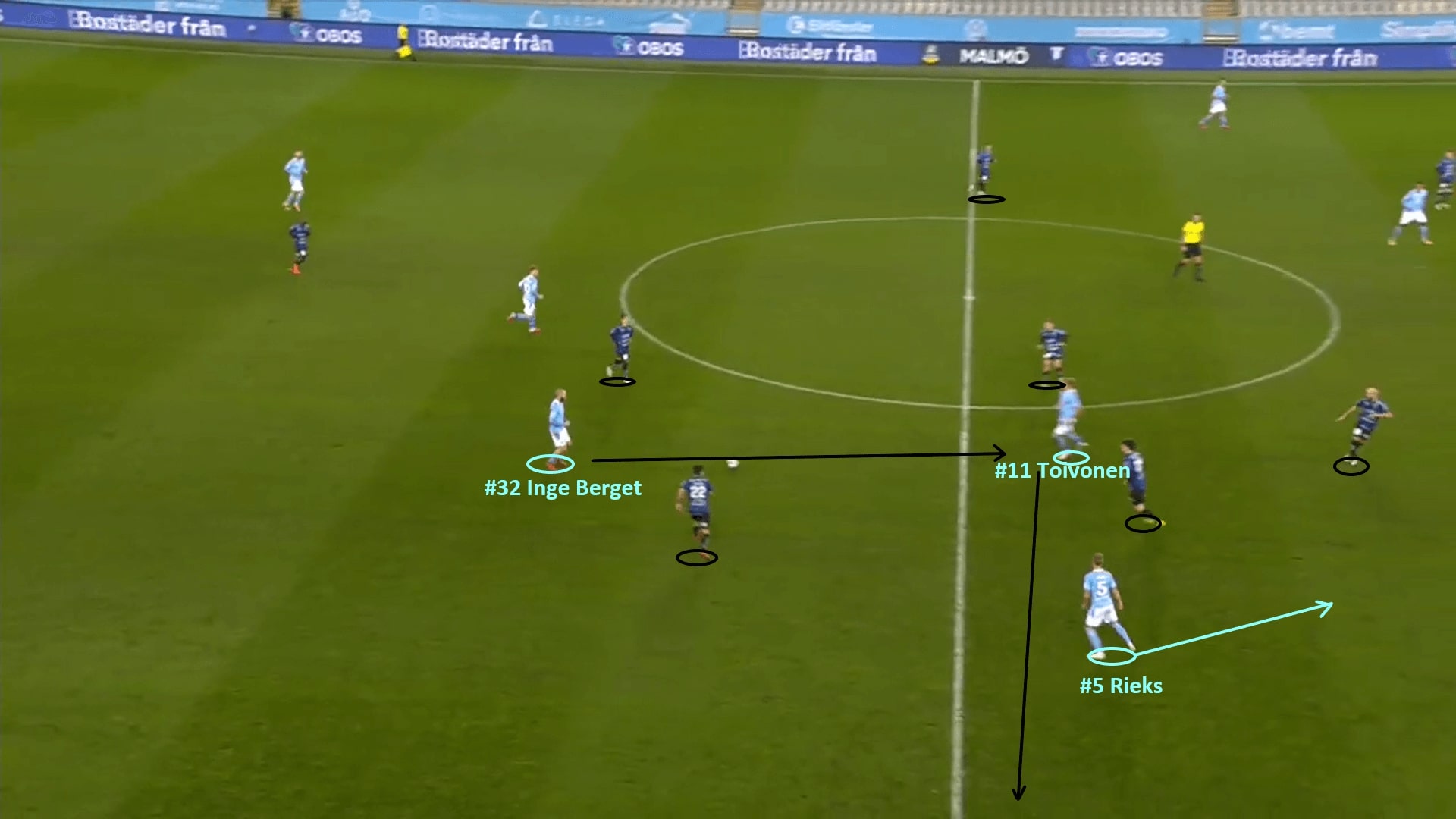 Sirius tried to adapt in the build-up

Malmö’s pressing was more than using shape to define. Instead, the zone-oriented system also included a pressing trap which was very successful, allowing the team to regain possession high on the pitch.

The press of Sirius mostly committed five players. Apart from the pressing players that crammed in one vertical half to close the targets, the high-low midfielders operated in two different heights to offer more protections (shown below). The centre-backs were also vital to step up and cover spaces behind the midfielders, while the far-side wingers should always disciplinarily tucking inwards.

In the first half, Sirius used various shape in the build-up phase. One of them is a 2-2 boxed shape – the defensive midfielders playing in front of the centre-backs. However, as suggested above, Malmö were fully prepared for this setup, the strikers have shadowed the midfield duo very well as Toivonen did below. 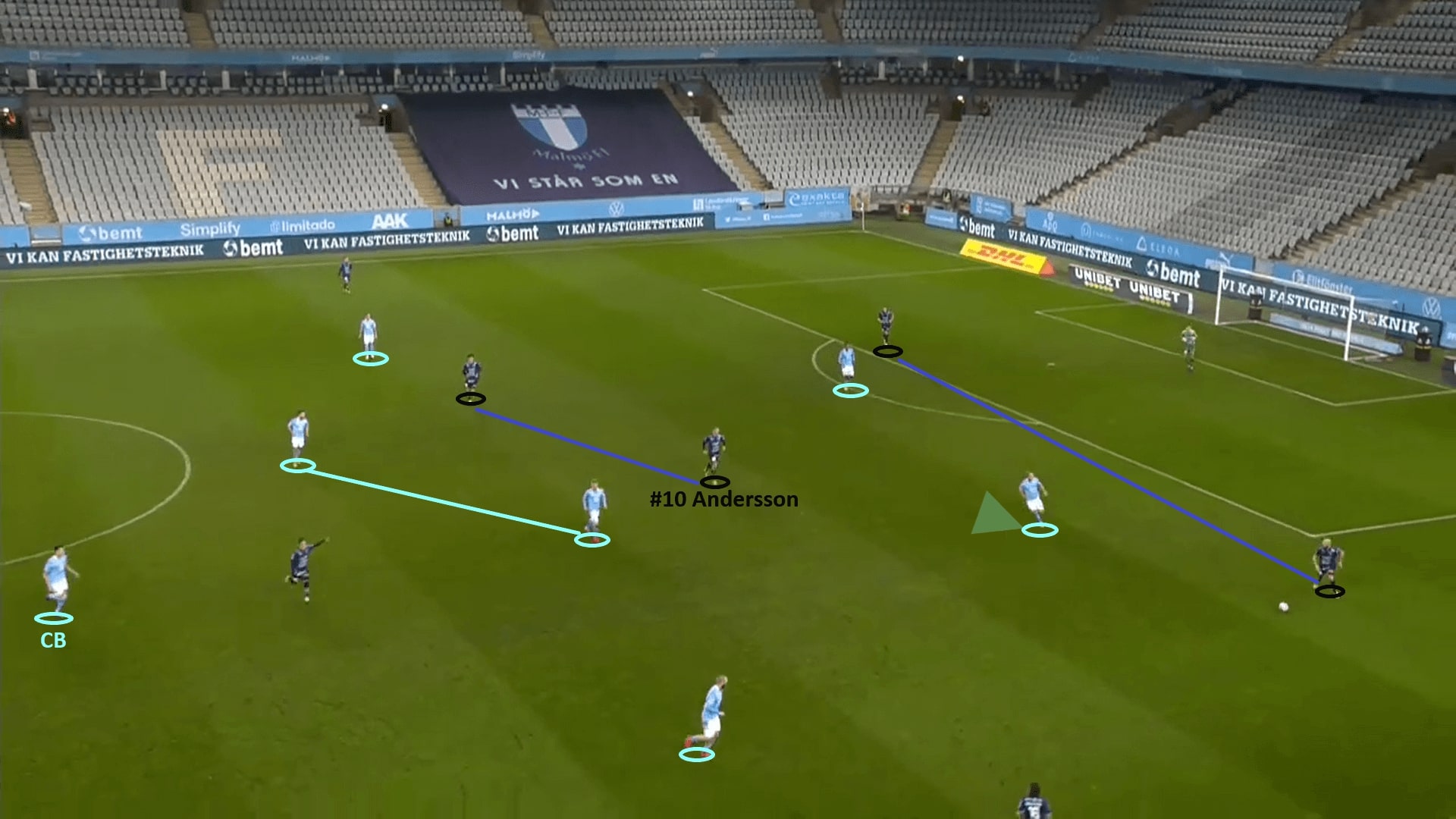 The pressing traps were set for the central passes, while the subject of the trigger was the closed body of receivers. After the ball entered vertical half where Malmö placed the majority of pressing players in it, they encouraged the central passes by not marking the opposition midfielders tightly. Once the pass was made, the defending players will press from the blindside to steal the ball.

Below was one of the examples of the pressing trap. Sirius passed the ball sideways very early, and Malmö placed four players to compress spaces, forcing quick decisions. Rakip, as the ball-side central midfielder, moved to that flank while Christiansen stayed deeper, functioning as high-low midfielders as explained. When Sirius tried to play the ball back to the centre, Toivonen and Rakip both approached from the target’s blindside, the latter has recovered possession high. 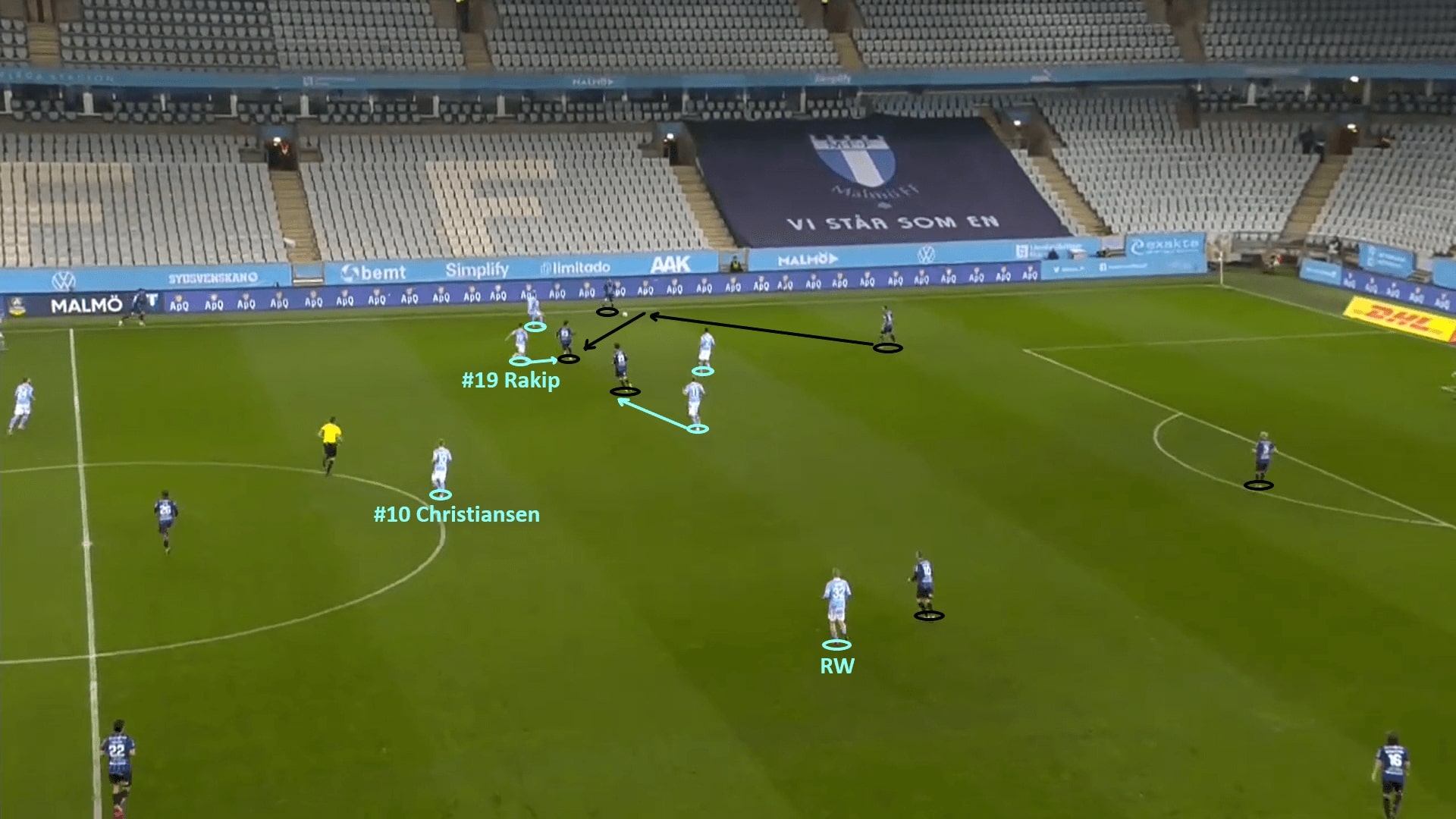 As the game continued, Elias Andersson took another role in the build-up to solve the issues of a 2-2 shape. Instead, Sirius formed a back three as Andersson was the extra man in this line, it was a 3-1 shape. The most important was the wide centre-backs to bring the ball out of the first line, disrupting the shape of the defence or playing the progressive passes.

At the first line, Sirius now enjoyed a 3 v 2 numerical advantage, Toivonen and Kiese Thelin were not possible to cover large area horizontally.  On most occasions, the wide centre-back could develop the attack as the free player.

Below was the game example that shows the benefit of the 3-1 shape. Still, Roche provided another layer in front of the centre-backs. Andersson operated as the right centre-back to bring the ball forward. Rieks was under a decisional dilemma as his zone was now overloaded by two opposition players – Andersson and Johan Karlsson. He was reluctant to press Andersson early at the expense of leaving Karlsson free. 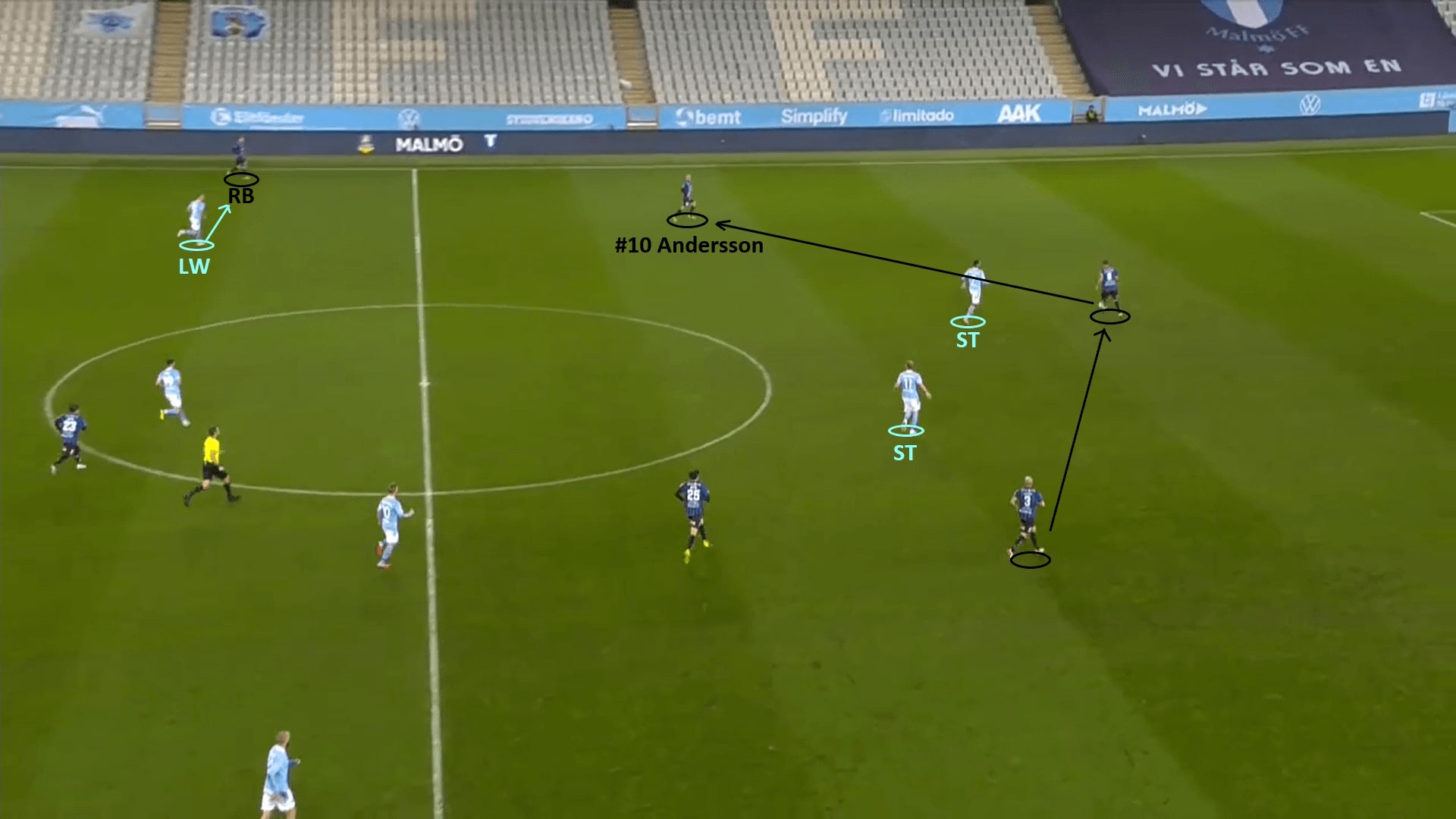 Below was another scenario of the successful 3-1 shape. Andersson dropped as the left centre-back the attack developed on the right side again. Ball circulation at the backline was easy because of the

This time, Rieks decided to step up early to press the Sirius right centre-back, but relatively large distancing made it difficult to access the opponent. Sirius still had rooms to play out from the back, using the dropping player (Roche) as the receiver, progressed by the right-back (Karlsson), who was left unmarked by Rieks. Sirius were slightly better in this period, but the passing quality needs to be better to develop into meaningful opportunities. 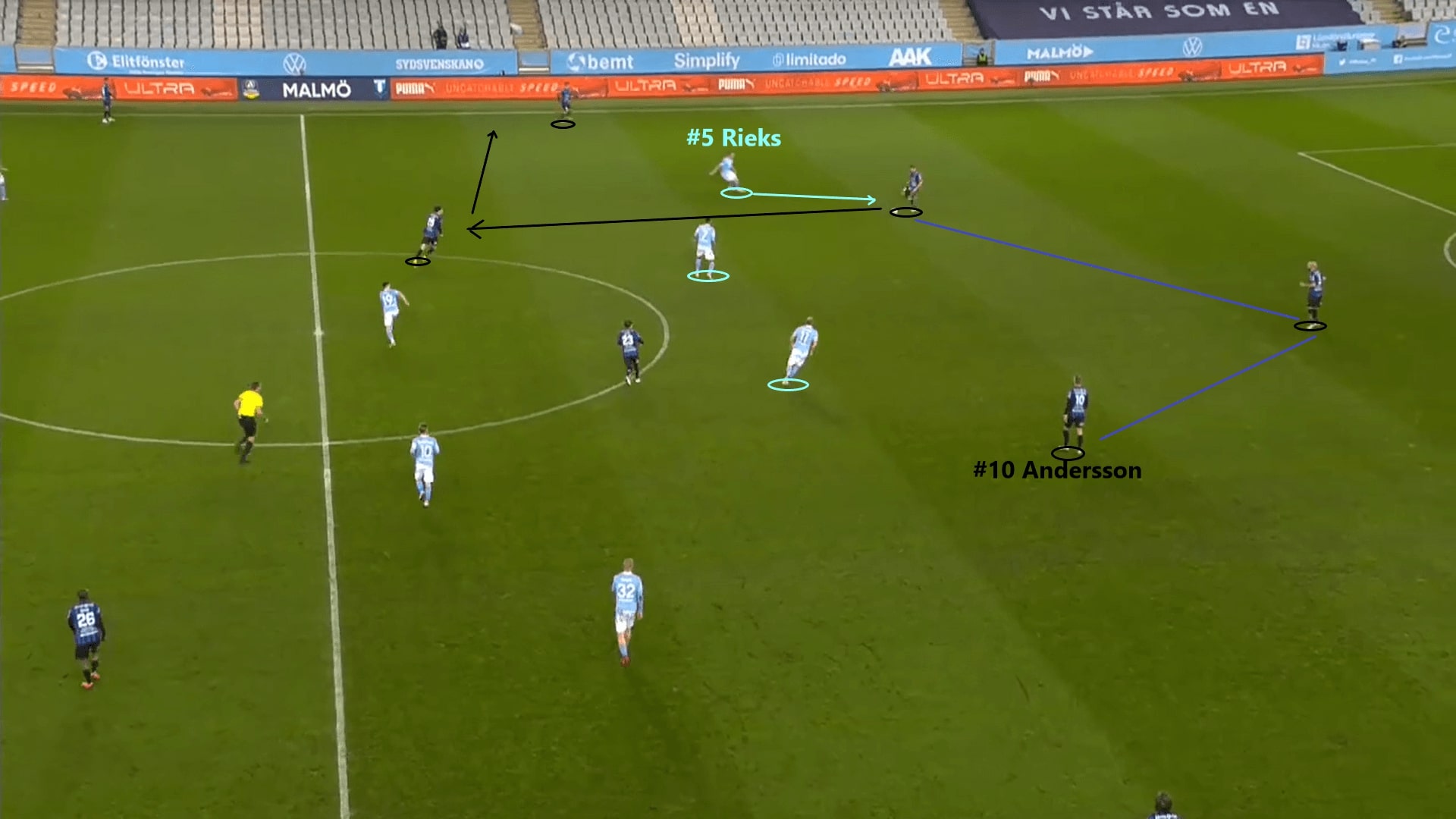 Second half changes by Rydström

Three-nil down in the first half, Rydström changed the tactics at the lockers room. Simon Gefvert replaced Shabani, playing as the right wing-back. The below image shows the second half setup of the team, it was a 3-4-4 shape. Sugita returned to his preferred right-winger position, Karlsson joined Andersson at the midfield, Roche was one of the centre-backs.

Defensively, Sirius enjoyed higher flexibility during the press because of the extra player at the backline. The wing-backs were encouraged to press early while there were four players remaining at the defensive line.

The first form was committing a winger and Saeid to press both centre-backs, mostly in a 5-3-2 shape. When the ball was moved wider, such as Toivonen below, Sirius needed the right wing-back to sprint and press the experienced striker.

However, we still saw Saeid or Sugita’s frustrated expressions in the first line because of defending in large areas. The numerical deficit still appeared, and Sirius could not stop Malmö from playing the ball to the central midfielders. 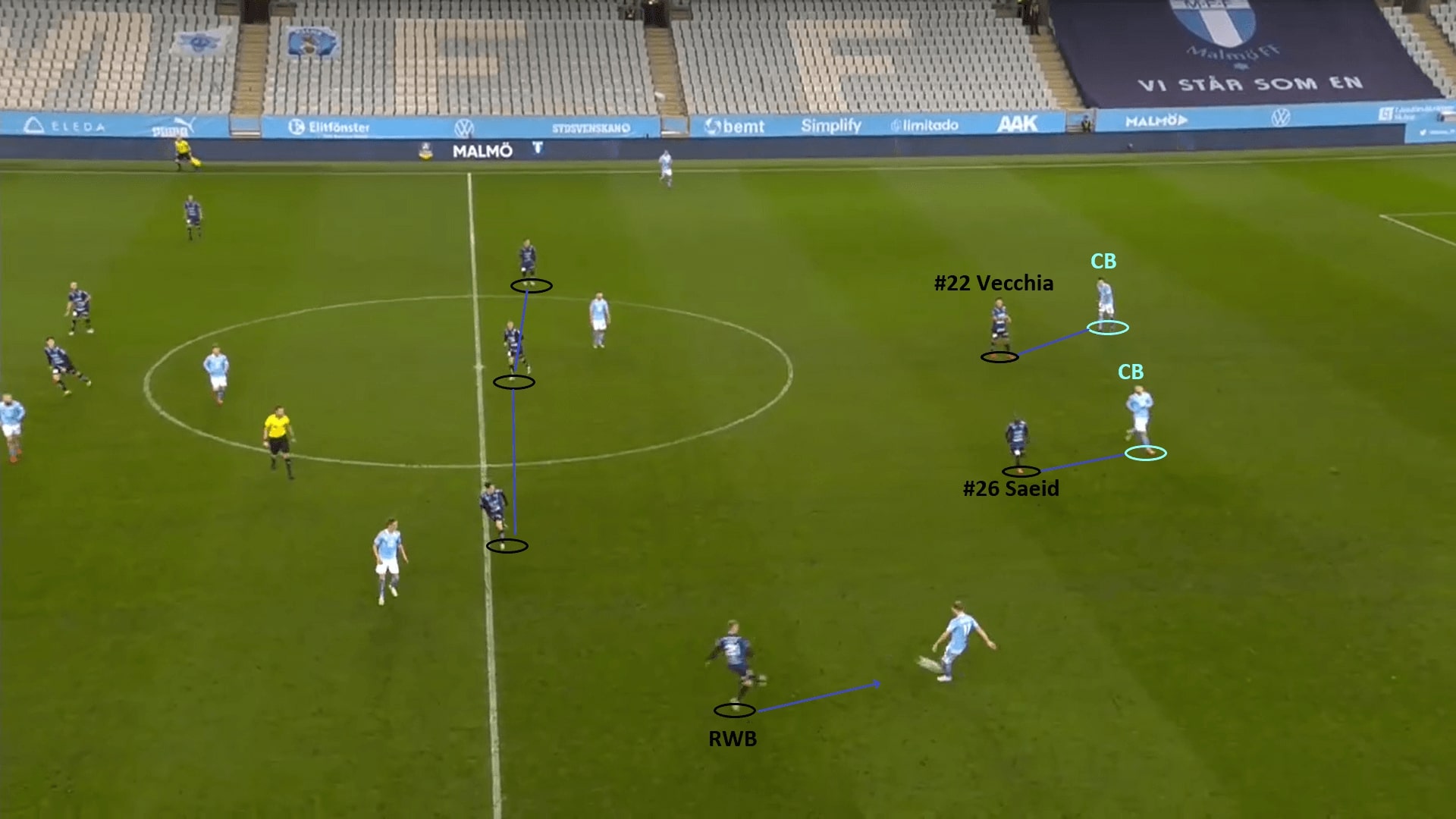 The below case was an example of distancing issue. When Saeid and Sugita were trying to press Nielsen, the Malmö pivot was unmarked. Neither Andersson nor Karlsson was quick enough to close the midfielder. Despite cutting the passing lane between the centre-backs, Malmö still escaped from the press easily.

After the wingers, especially Sugita stepped up to press the centre-backs, Sirius’ right half-spaces was left exposed. Vertical gaps between the midfield and the defenders were still large, which was difficult for the centre-backs to cover. The likes of Roche, Hjalmar Ekdal, and Tim Björkström also lacked defensive awareness and aggressiveness to cover those spaces. 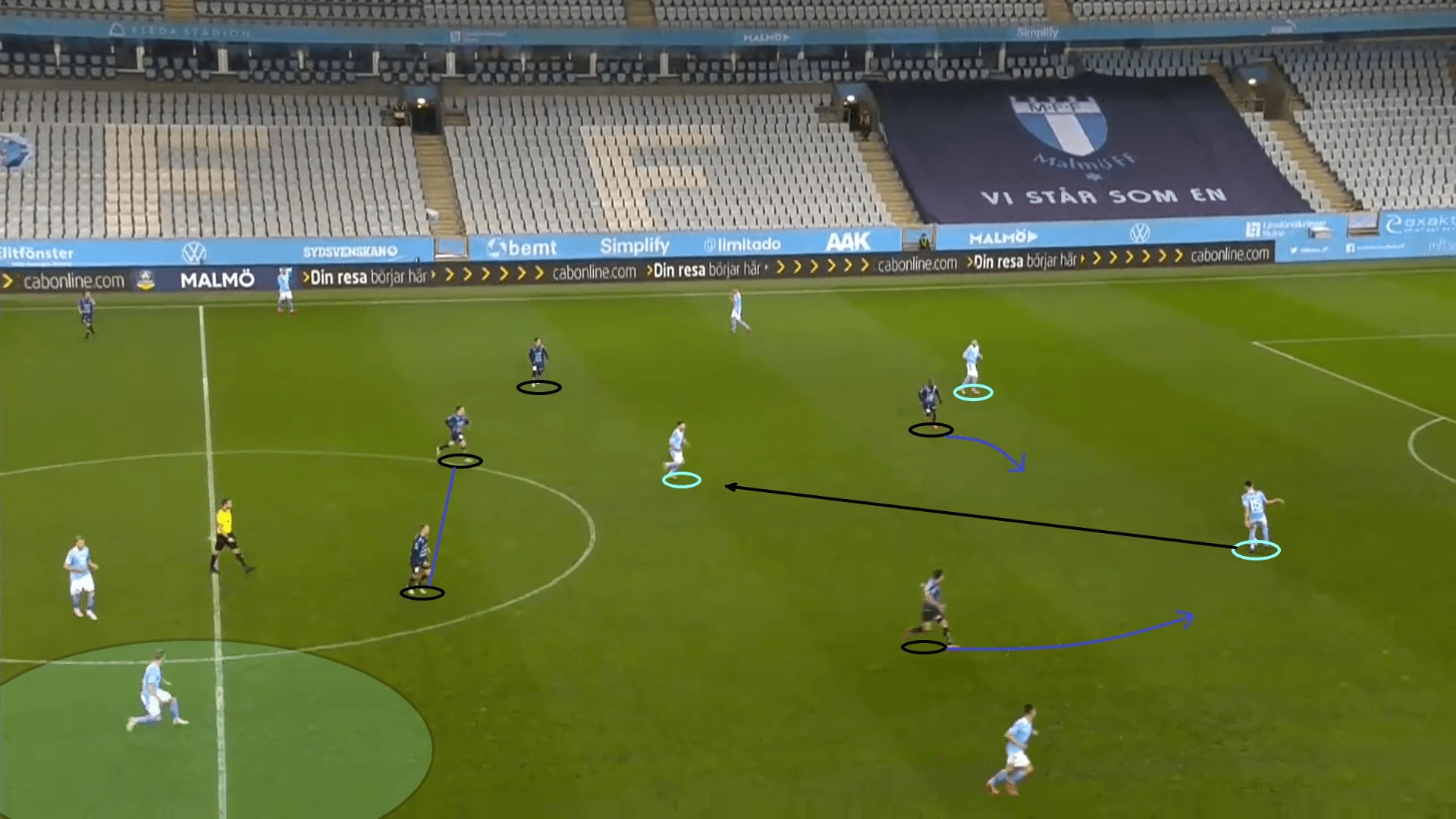 The attacking scheme also changed a bit although the use of the back three is a must. To better release the attacking flair of Vecchia, Sirius created a wide overload to open spaces for the left-winger, who operated narrowly in the second half.

The left centre-back played likes a left-back in the first phase, drawing the right-winger out of position. Meanwhile, Axel Björnström played in the wide left to lure right-winger moving wider. Since Inge Berget and Larsson were pulled out of positions, Vecchia could leave unmarked at the half-spaces as shown below. The job was to pick this run, giving the ball to the best attacker of the team. This has led to a shooting opportunity which Marko Johansson was called to action. 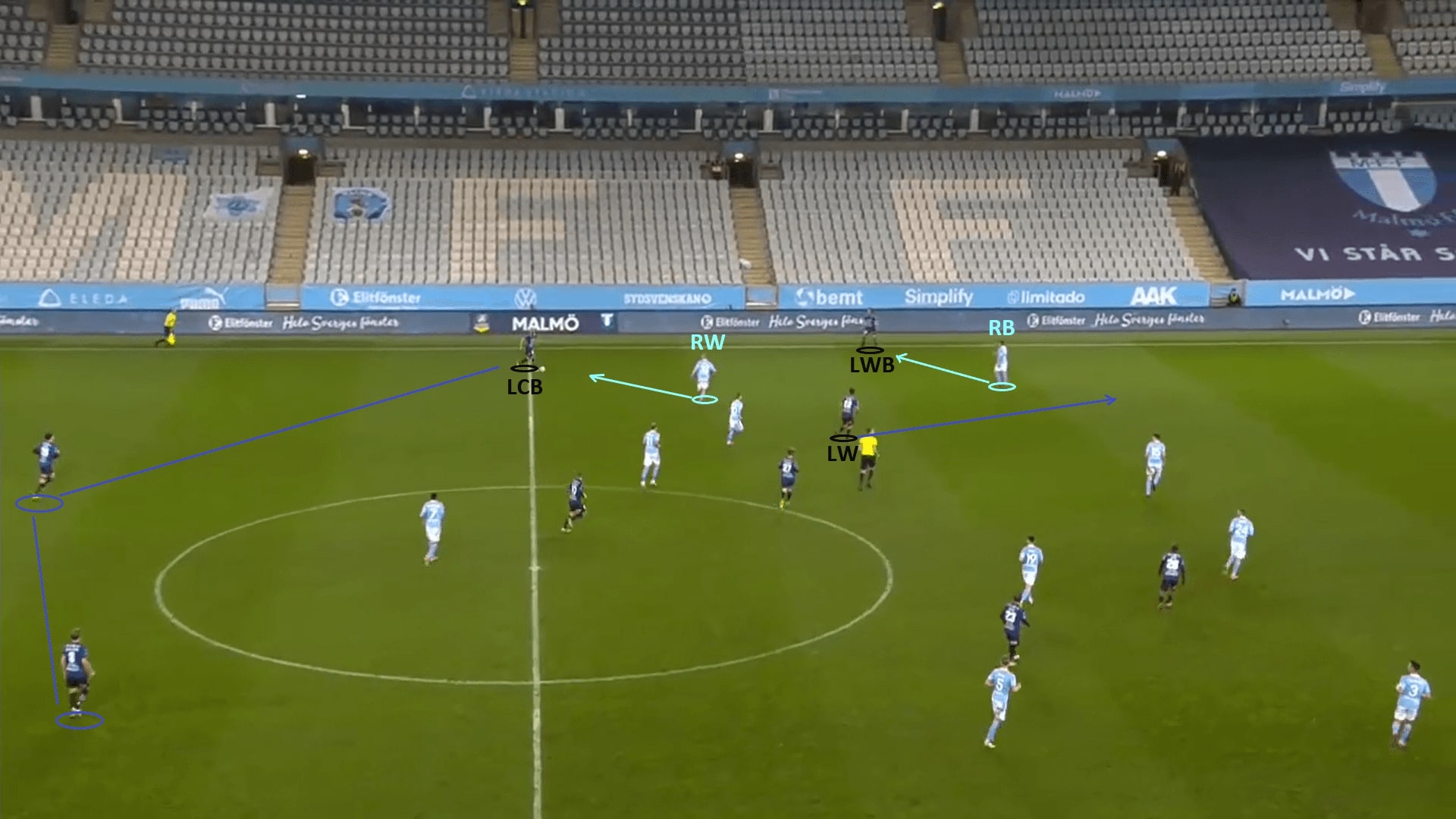 Congratulations to Malmö, they totally deserved the title despite not having the smoothest start in 2020. Jon Dahl Tomasson quickly adapted to the conditions, playing more direct football as the season continued was one of the key factors that contributed to the good result. Also, the team has shown the consistency that none of the other competitors can reach in the middle of the season. Maybe it was the chance for a Swedish team returning to the UEFA Champions League.

Sirius do not have to be very disappointed because of the score-line. In fact, this was also one of their best seasons in Allsvenskan, they were never going to fight in the relegation battle. Although the budgets and options for squad rotations have limited their possibilities to challenge the top-three position, but they were playing very beautiful football in Sweden and deserved praises as well.