After getting a draw against AIK in the weekend, fans of Malmo FF might not be too happy with the results and coaching of Jon Dahl Tomasson. In the hopes of keeping the title dream alive, the team has to try sealing all points from the champion of Allsvenskan in 2019: Djurgarden.

In this tactical analysis, we will show you the tactics of Malmö and Djurgårdens.  Tomasson’s team was different from usual and it might have surprised Kim Bergstrand.

Malmö played in a 4-4-1-1 formation with a couple of changes. Oscar Lewicki dropped to the right-back as a replacement of Eric Larsson. The left-back was Behrang Safari instead of Jonas Knudsen, the former Ipswich man. Jo Inge Berget was the right-winger and Anders Christiansen returned from the suspension.

For Djurgårdens, they played in a 4-2-3-1, also changed their starting eleven a bit. Jonathan Augustinsson returned as a left-back. The wingers became Jonathan Ring, Haris Radetinac on the flanks.

In this game, Djurgårdens adopted different defensive systems in the first and second halves. The Järnkaminerna were more conservative in the first half and because of Christiansen’s goal at the 43rd minute, they went more aggressive in the remaining time and pushed the defence higher.

The changes were suggested by the recorded PPDA which was summarized below. In the first half, the PPDA ranged from 9.3 to 18 and after the goal, it ranged from 5.5 to 10.

In the first half, the defensive system of Djurgårdens was a zonal one which set a midblock at the centre. The wingers were inverting to the half-spaces to increase the number at the midfield, forming a 4-2-3-1 or a 4-1-4-1 if a pivot stepped out. This overloaded the midfield and prevented Malmö accessing and developing plays in the central third.

Below is the defensive shape of Djurgårdens. Although the Malmö pivot, Fouad Bachirou was on the ball, the away team was not applying pressure at the expense of losing the shape. This mindset and approach allowed Malmö to play out from the back in the first half, though the away team possessed a 4 v 3 or a 5 v 3 centrally, the first and second lines were bypassed because of their passiveness. 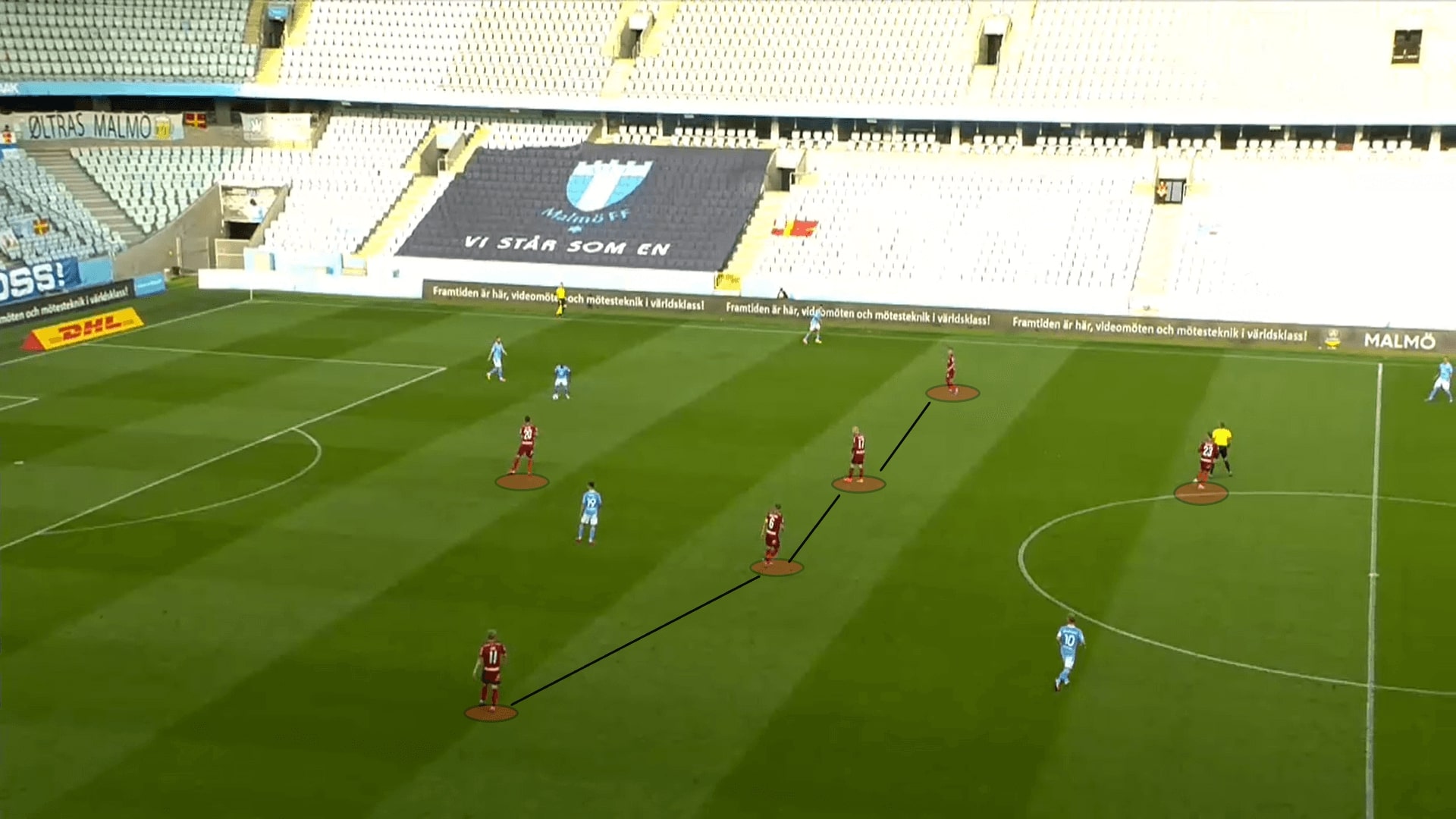 In the second half, Djurgårdens had to be active and try to win the ball back. They went man-to-man to match the build-up shape of the opponents. Since Malmö were using a 2-4 or a 4-2 in the first phase, the away team mirrored it and only left the defence deep.

We illustrated their man-marking approach here, the pressure followed the ball and its direction. This forced Malmö to speed up the plays and decisions, resulted in more long passes or ground passes with lower quality. This pressing suffocated the presence of the free man in the opposition build-up phase, and Malmö were not attacking as usual. 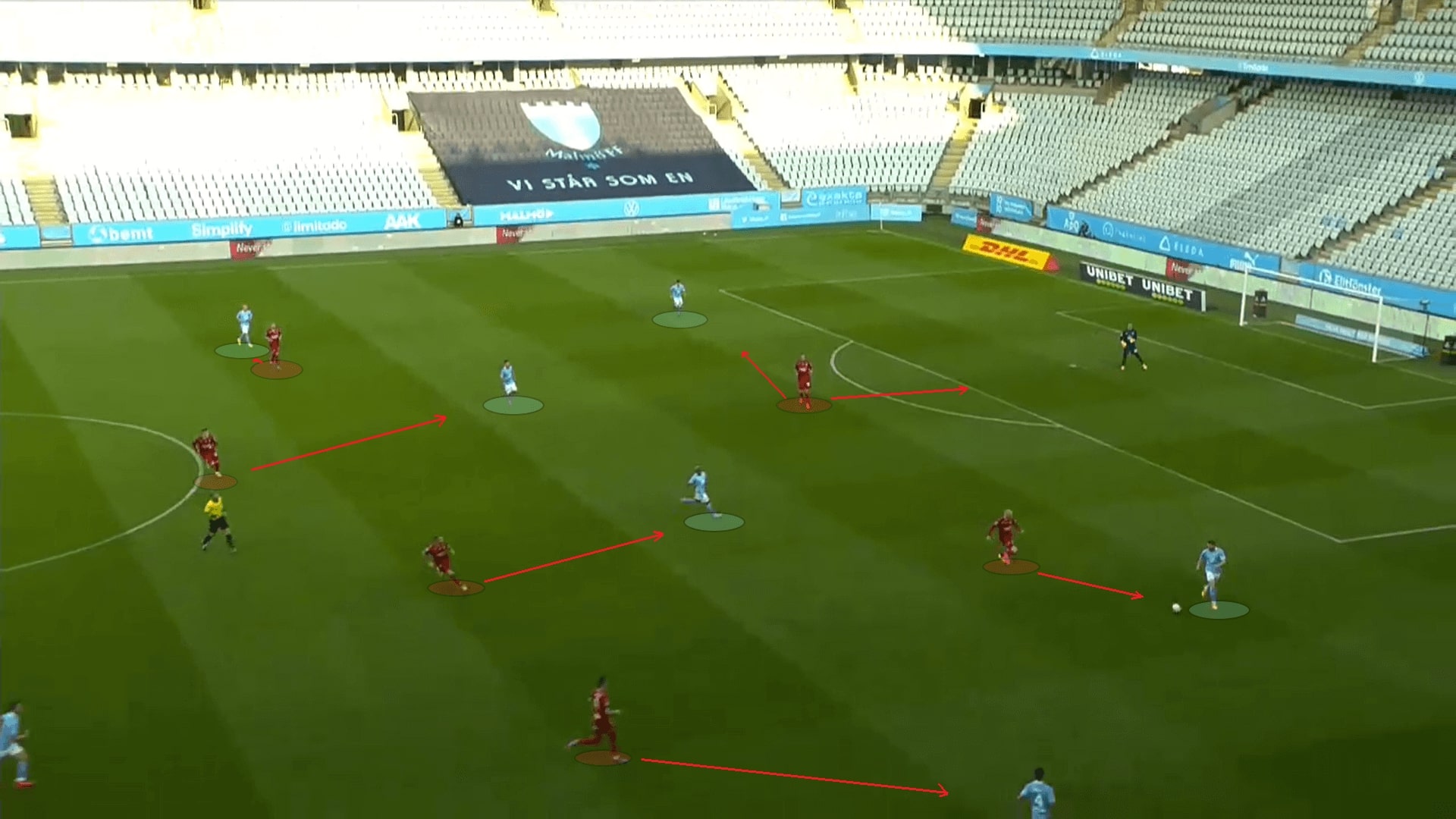 The potential pressing trap was set at the centre in this man-marking approach. Djurgårdens left the opposition pivots as the bait options, as Bachirou and Erdal Rakip were not tight man-marked. If Malmö tried to develop the attack through the defensive midfielders, the ball-passing moment was the pressing trigger.

The pressure on the pivot should be applying from multiple angles because of the initial positionings of the players. Also, the nature of a vertical pass always hindered the body shape of the receiver, just like Bachirou, the former Paris Saint-Germain B player below. Consequently, Djurgårdens regained possession in the final third and created a good counter-attacking opportunity. 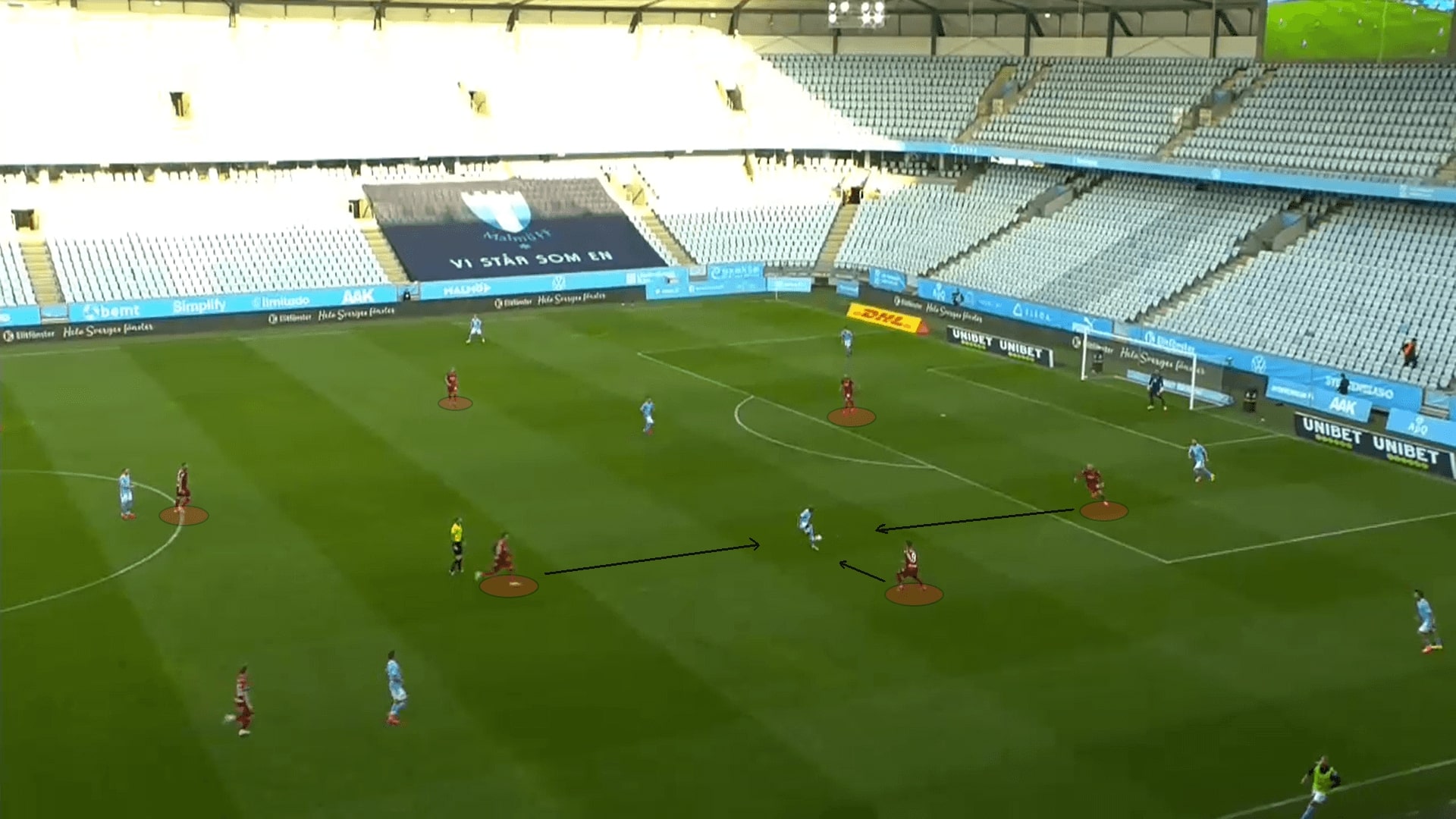 Malmö with another offensive approach

As explained in the above analysis, the context of this game was very different from the previous matches. The defensive approach adopted by Djurgårdens forced Malmö to play more directly. Maybe this was helping their inefficacy in the positional plays as Tomasson’s team struggled to break a static defensive block previously.

Below is the passing links and average positions of Malmö. We could not notice the circulation of the ball between the backline as the linkages of the centre-backs and the full-backs were weaker than usual. Also, Bachirou and Rakip were not connecting each other at the midfield.

An interesting setup was the position of Christiansen, the attacking midfielder. He stayed very high, just behind of Kiese Thelin in this game. Meanwhile, the wingers, especially Søren Rieks inverted to the half-spaces.

As mentioned, Malmö progressed plays with ground passes more often in the first half. Here, the shape was roughly like a 4-2-3-1 (or a 4-4-1-1). The most important was the position of Christiansen, who seldom dropped deep. The skipper only operated at spaces behind the second line, serving as a progressive passing option for the build-up players.

Here, Bachirou exercised his good passing ability to find Christiansen, the former Chievo Verona player who was between the lines. Notice the positionings of the full-back, instead of pushing high to the second build-up player as they did before, they were more conservative in this game.

This might be a tiny tweak out of the defensive concerns. Previously, Malmö conceded many opportunities in the transitions as the opponents targeted spaces behind the full-backs. The issue was lighter in this game. 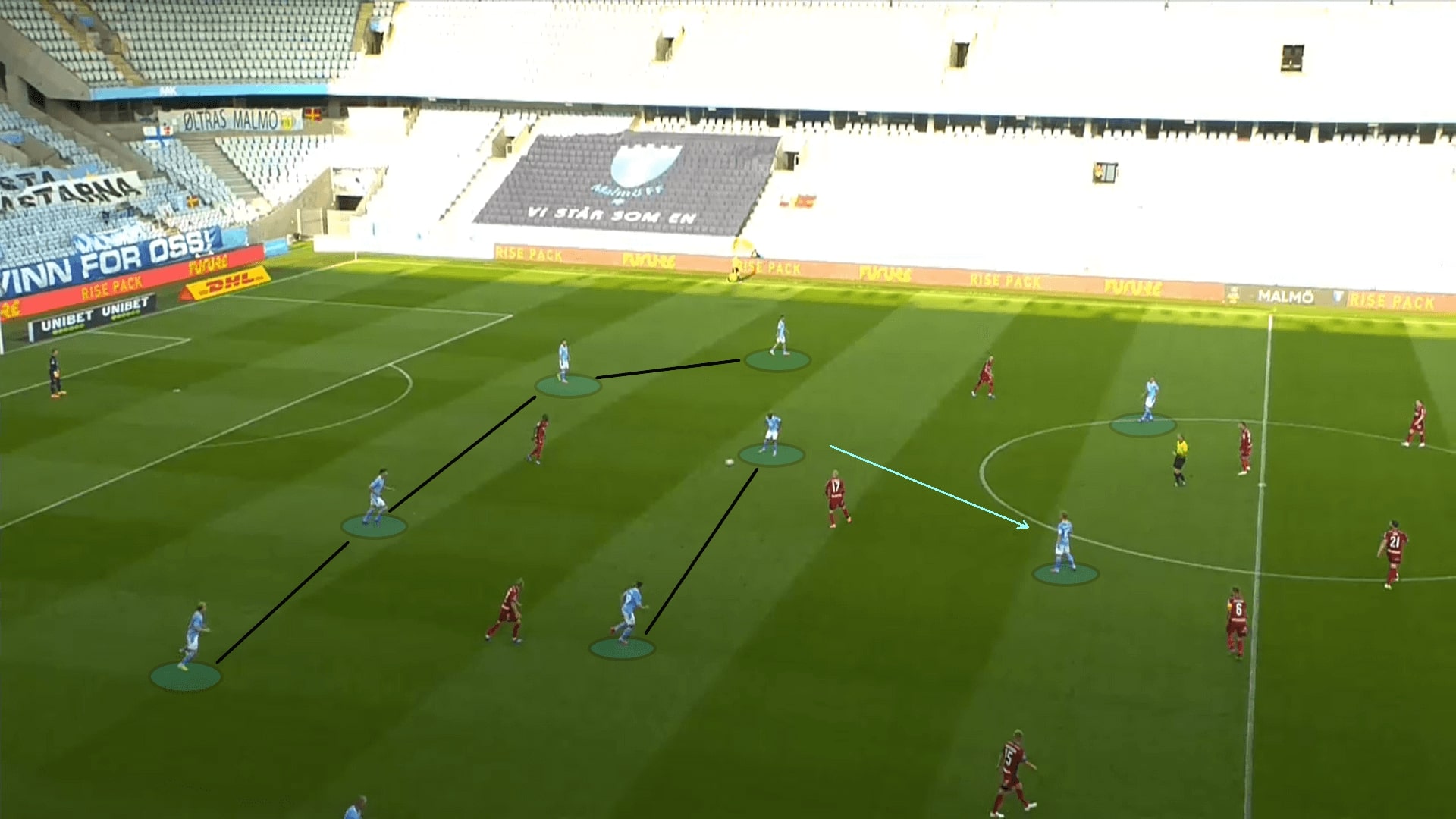 If Christiansen was found behind the second lines, Malmö already created a favourable attacking condition. As, after bypassing the pressing players, Malmö directly faced the Djurgårdens.

Here, with his good techniques, Christiansen could always control and turn quickly after receiving a penetrating pass. His presence to provide the passing options between the lines was vital for Malmö to access the final third. On-the-ball and given the spaces available, he could either continue carrying the ball forward or pass to a teammate.

Credit should be given to Kiese Thelin and Rieks as well, their high positionings kept the Djurgårdens backline occupied. These behaviours hindered the defenders from stepping out, unless they allowed Malmö to attack spaces behind the high line defence. 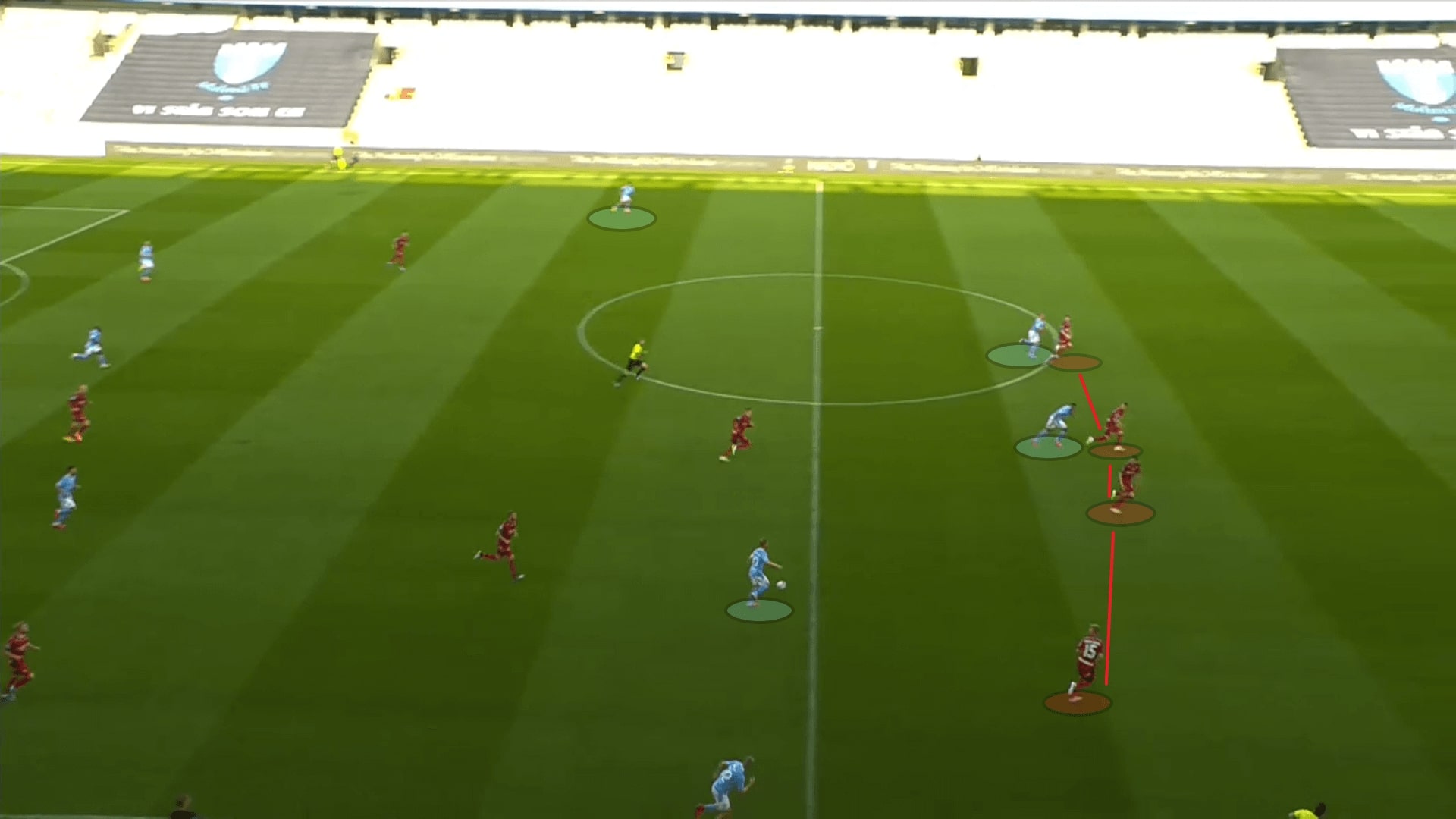 Rieks started over Tim Prica again. The off-the-ball-movements of the 33-year-old Danish player was quite important in this game. Apart from the behaviours that manipulated the last line, Rieks’ narrow positionings, the inward and dropping movements also kept the right-back busy.

With Rieks, the wide corridor on the left was opened to Safari often. For example, Aslok Fonn Witry, the Djurgårdens right-back followed Rieks and left the backline, This opened spaces for Safari to exploit and potentially for the crosses. 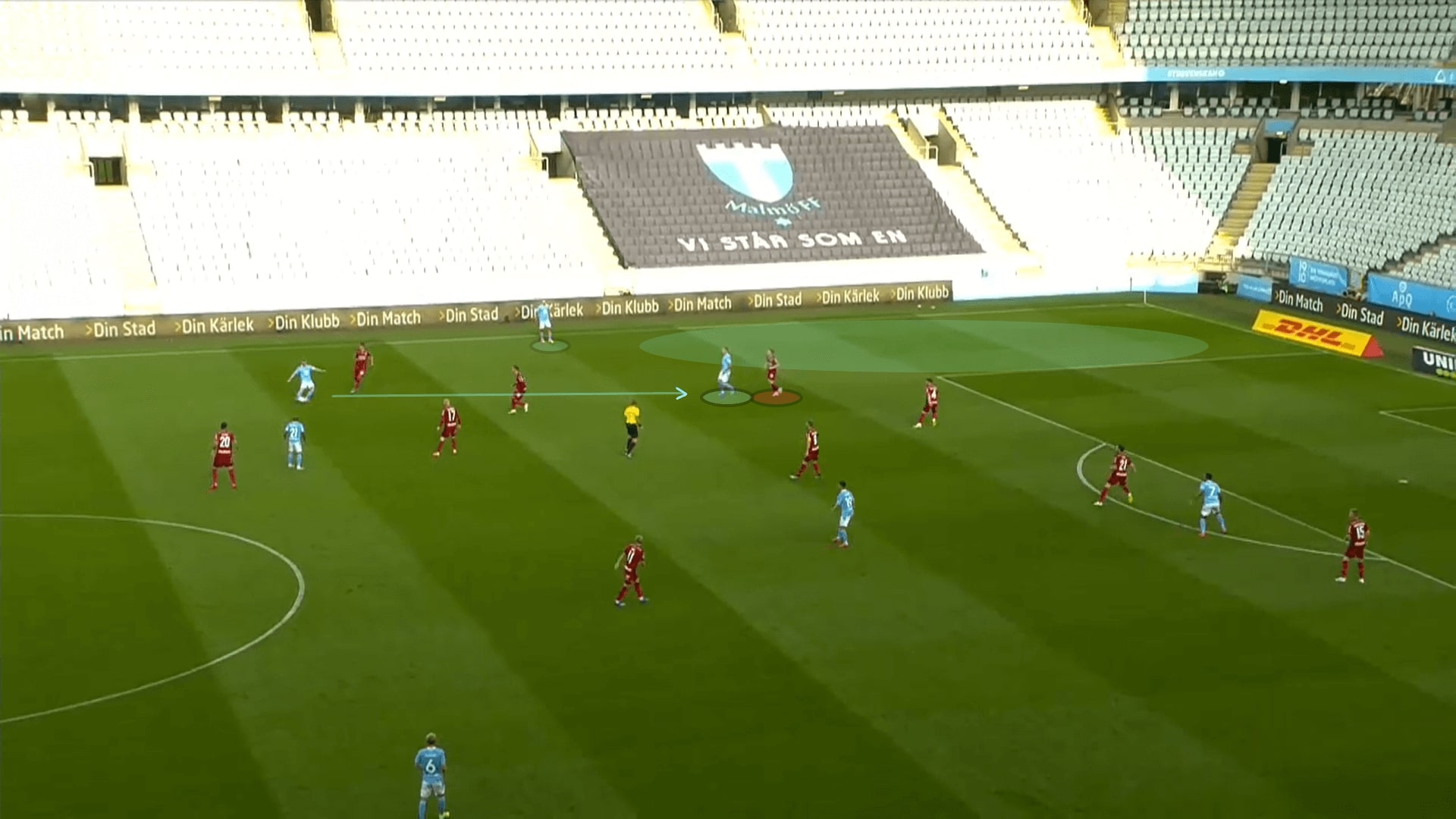 Attacking with the long balls

We have explained how Djurgårdens pressed and made a difficult build-up phase to the away team. In response to the press, Malmö were playing long more often and try utilizing the physical strength of Kiese Thelin as an escape route.

The Malmö #7 was quite useful in the transitions or as a target for the long passes. He was competent to control the ball in the air, allowing his teammates to pick the second balls or the layoffs around.

Also, these duels for the direct passes also took a centre-back out, creating spaces at the backline. In this example, Kiese Thelin used his body to separate the pressing player and the ball. Then, releasing the third man and Malmö progressed. 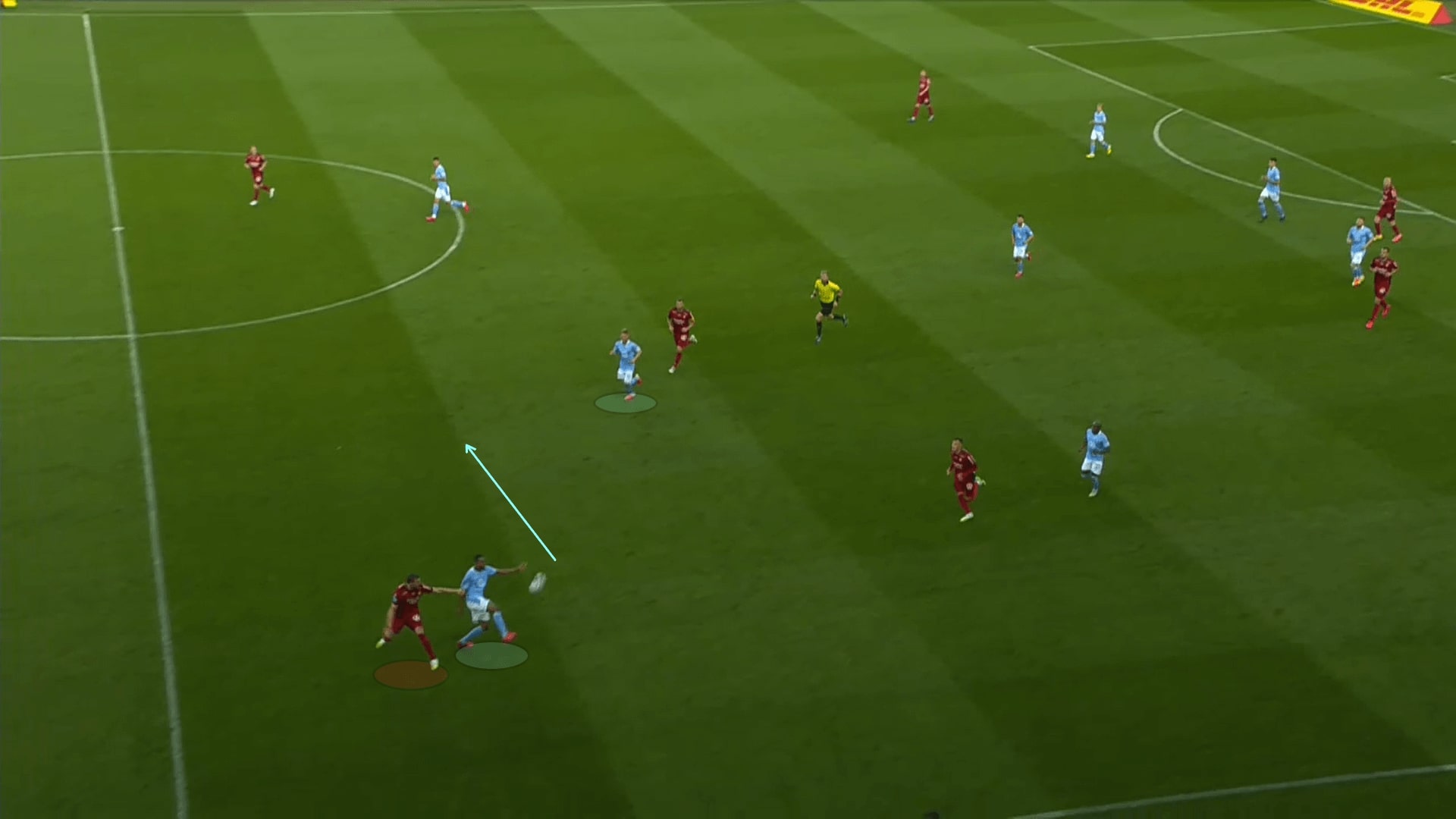 We also noticed Tomasson tended to play Kiese Thelin and Guillermo Molins together more often. These two were strong at the frontline and potentially they will start together in the future.

With Kiese Thelin’s physical superiority, he occupied and drew the attention of defenders as we highlighted below. As a supporting player, Molins often exploit spaces created by his partner and looked for a pass.

Here, Molins had a shooting opportunity since Kiese Thelin dragged two defenders near. It was difficult for the centre-backs to defend if the two strikers were playing together. This also allowed Malmö to use the long balls as an offensive strategy and bypassed intense pressure. 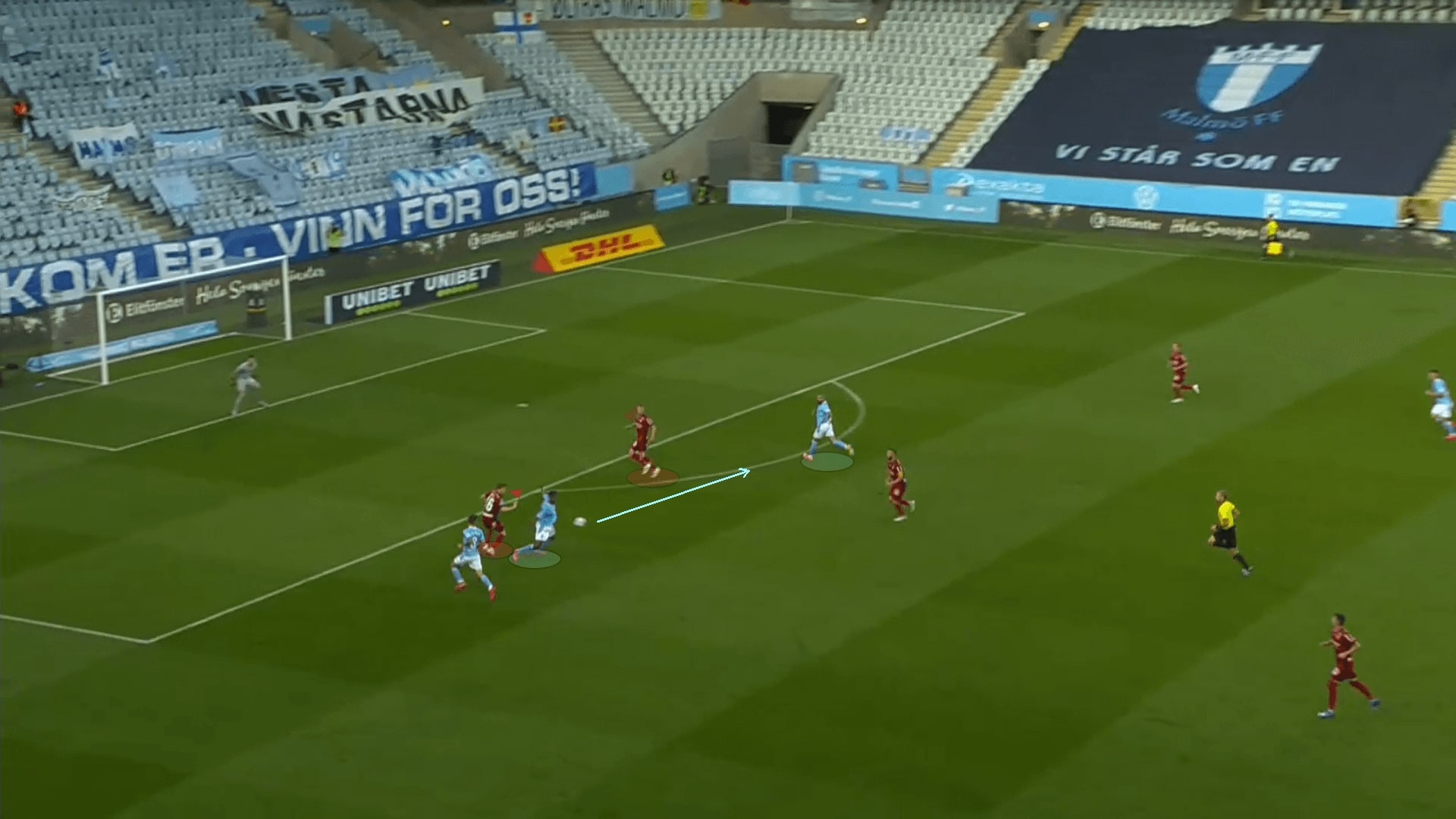 Offensively, Djurgårdens were attacking flanks confidently as usual. The use of crossfield balls and long diagonal passes were really a trademark of the Järnkaminerna. With these strategies, they could access the final third and the wide areas quickly.

The first thing we would like to point out was how Djurgårdens exploited the defensive setups of the home team. Rieks was usually staying higher and narrower in the defensive phase, and this allowed the away team to attack flanks with a 3 v 2 numerical superiority.

Here, Bachirou was had a tough decision to make as he had to defend two players. If he went to the ball, the central passing lane was opened. Meanwhile, Safari was occupied and unable to step out. This allowed Djurgårdens to carry the ball forward into an advanced area. 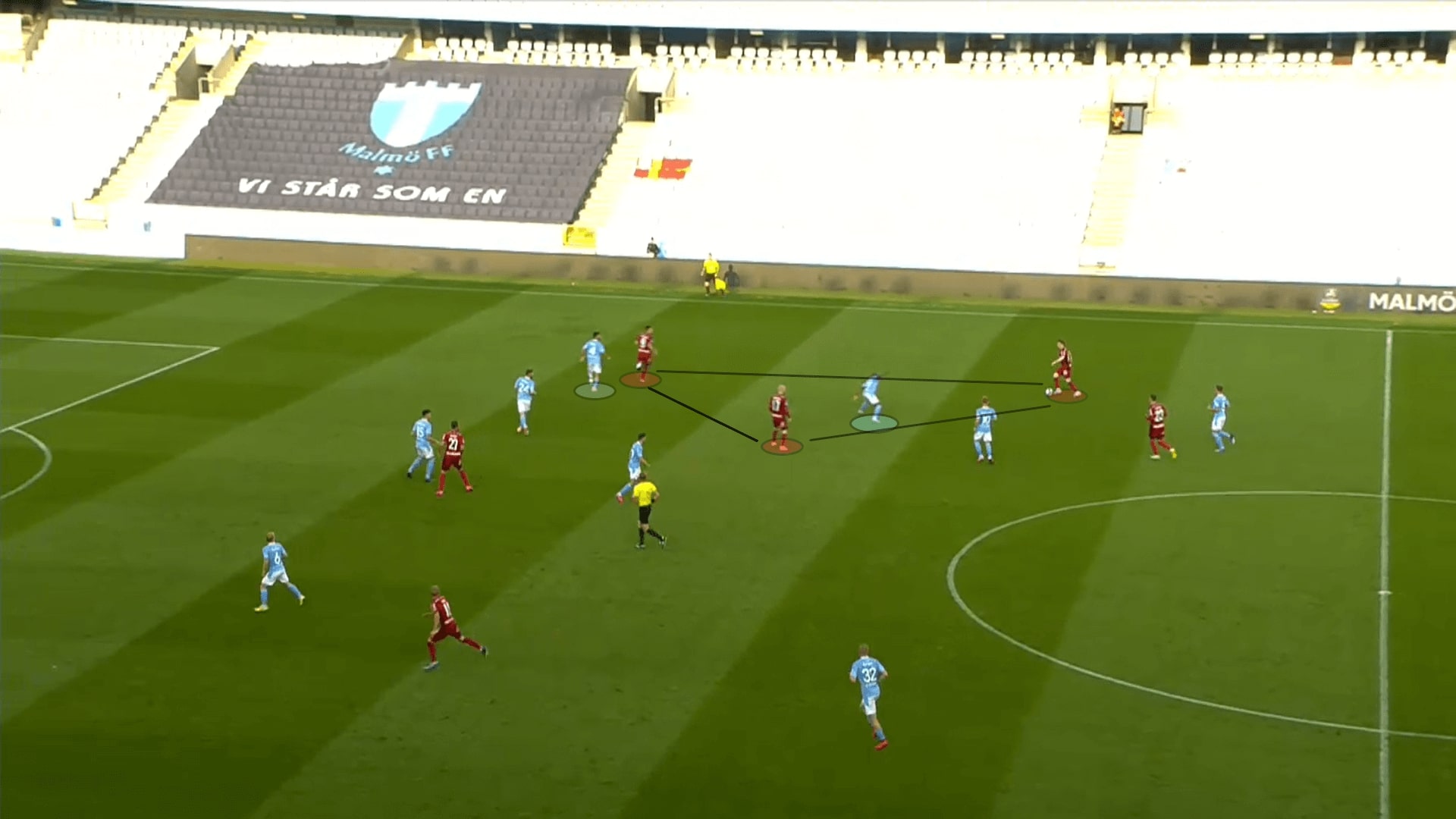 What Djurgårdens were doing impressively were the diagonal passes. They always find the free player at the underloaded flank with these passes, hence, the opponents had to switch the defensive block to cover the wide areas.

Here, Witry received the crossfield pass. Malmö were moving the block to this initial underloaded side. 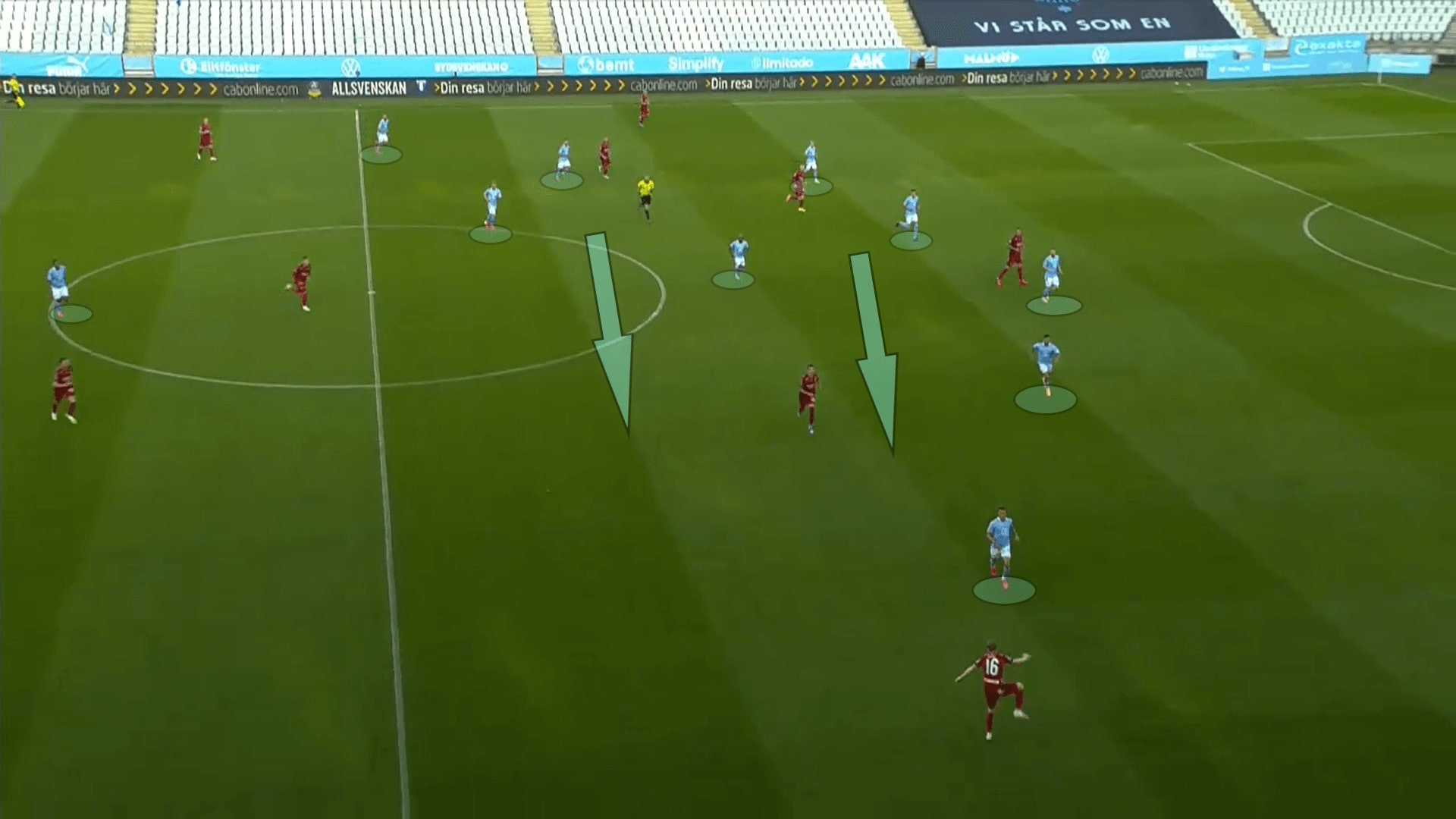 However, Djurgårdens did not wait and let the attack stopped or being trapped on the right. Instead, after the opponents switched the defence to this flank, larger spaces were available at the new underloaded side.

Here, spaces were highlighted in red. With another brave diagonal pass, the wide player was found, and he was free to exploit the region.

The ball was always faster than the players, so no matter how the defending team moved, Djurgårdens’ diagonal passes always reached spaces out wide. 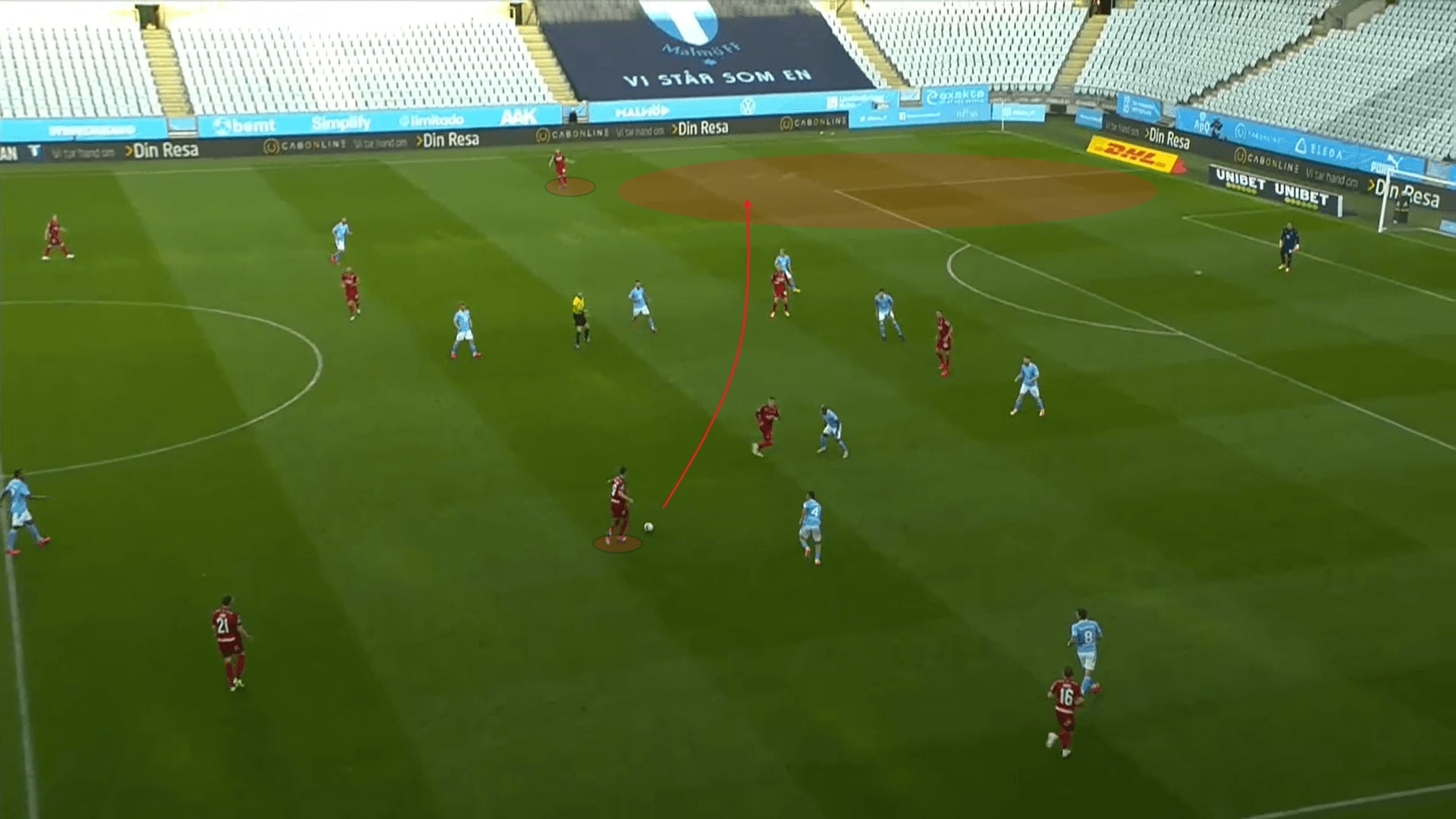 The next was the preparations for a cross. The ball-player was often supported by an overlapping full-back on his side. Since Malmö wingers seldom committed themselves into the defensive third, a temporary numerical overload was available in these attacks.

Here, Witry supported Radetinac in this 2 v 1, and a crossing opportunity was generated easily. 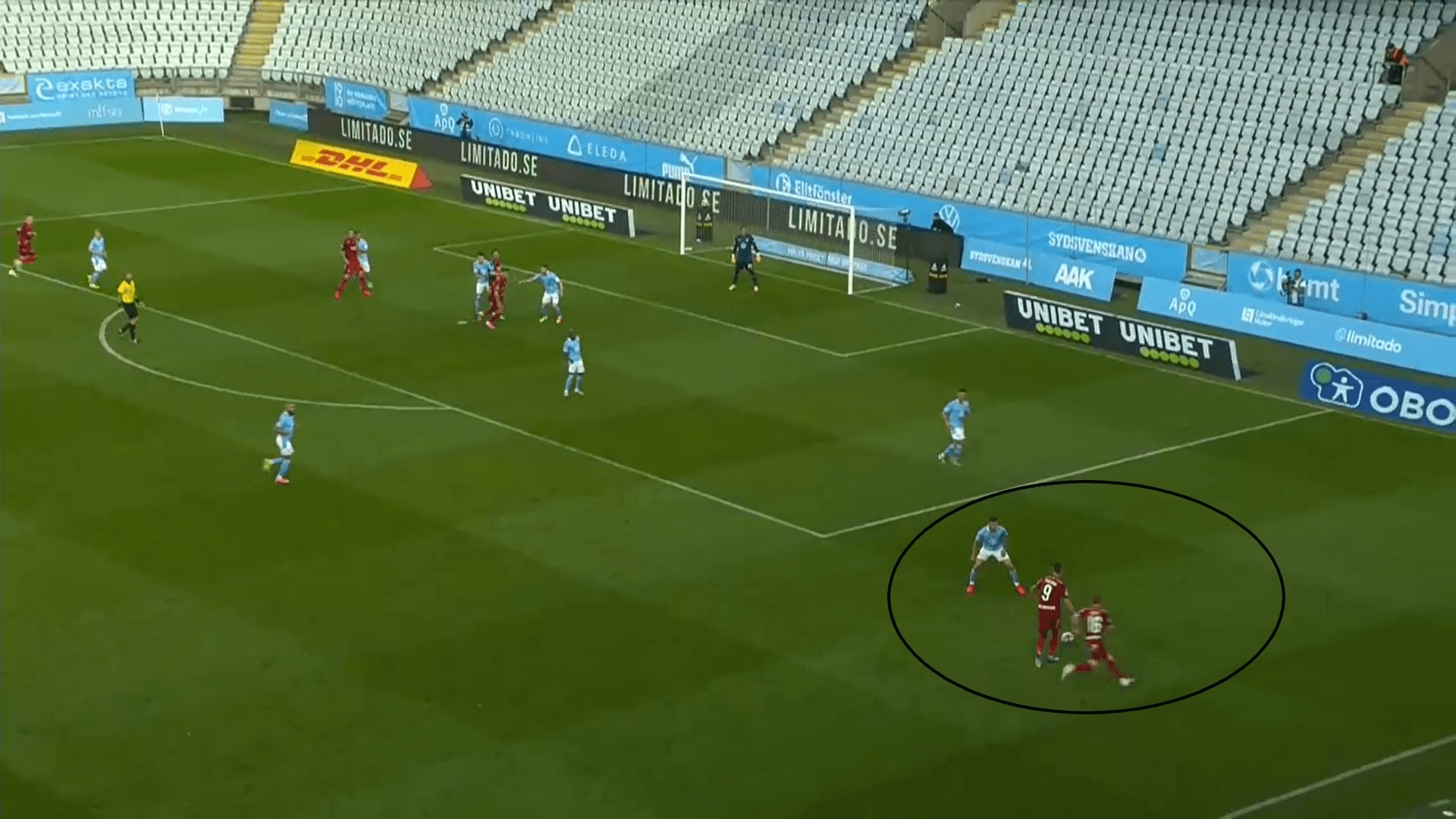 Once the ball reached the wide areas, Djurgårdens players were keen to attack the box and this approach was quite successful. With the numbers committed into the penalty area and the diversities of the directions, Malmö had difficulties tracking every player while looking at the ball. Some valuable opportunities were created because of this.

Here, as an example, we demonstrated how Djurgårdens attacked the box. Four players were running into four directions, in different timing. There was a player (#11 Ring) at the front post, another one (#23 Fredrik Ulvestad) attacked the right-back’s blindside at the far post. Another two were making the late runs at zone 14. 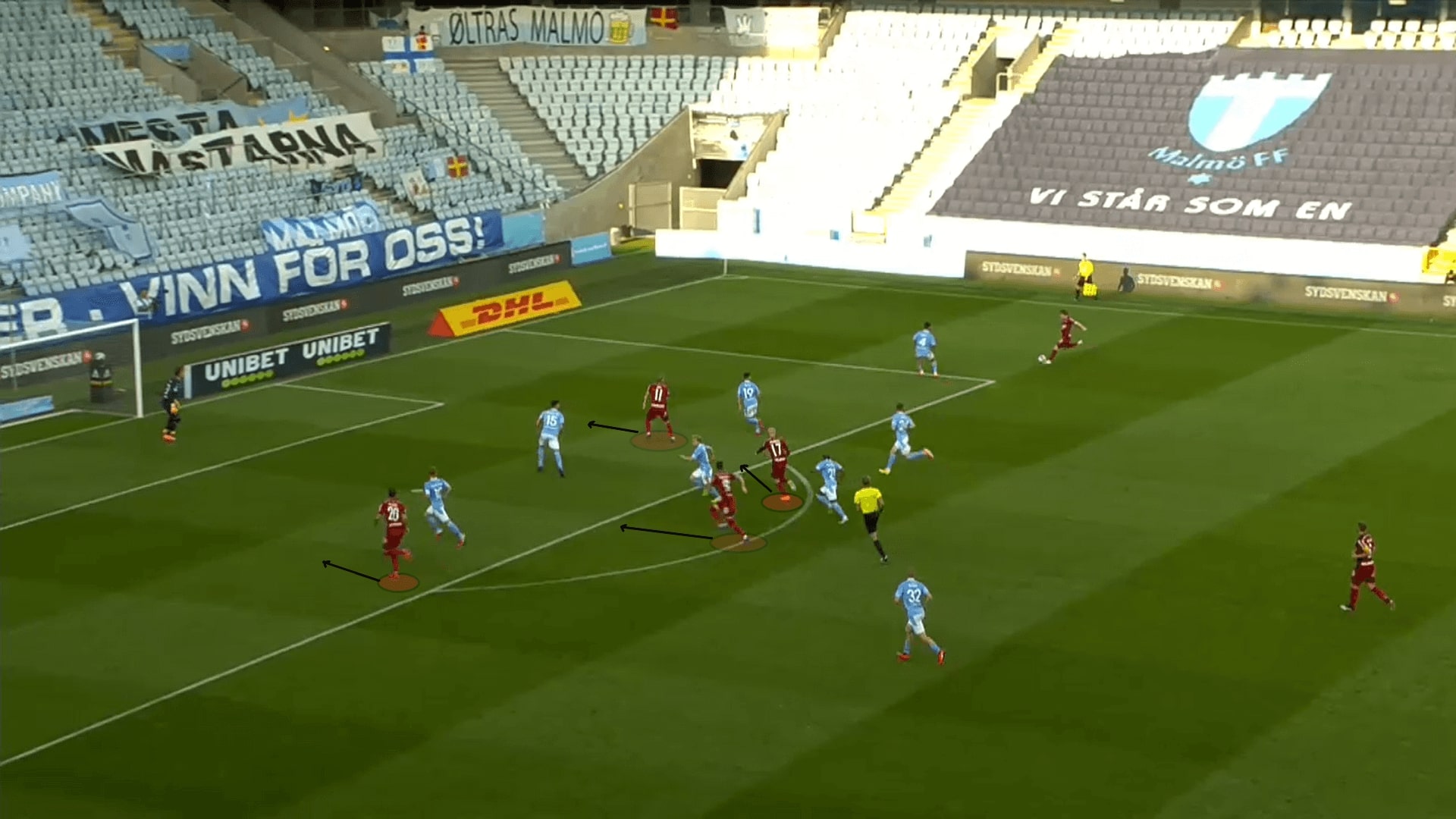 Finally, Malmö won an important game as some issues were eased temporarily. Once again, I think the combination of Molins and Kiese Thelin was very interesting, it would be a potential and effective attacking tool of the team. We will see whether the two start together in the future.