How did Kalmar FF survive in the Allsvenskan 2020 play-off? – tactical analysis

Allsvenskan and Superettan 2020 were finished in early December. Two relegation places were confirmed as we saw Falkenbergs FF and Helsingborgs IF were the last two teams in the table. However, just like Bundesliga and the promotion of EFL Championship to Premier League, a two-leg play-off is needed to determine the final results. After fighting very hard to secure the 14th place, Kalmar FF were once again in the Allsvenskan play-off in two consecutive years. Their opponents were Jönköpings Södra IF, the third in the second-tier.

The two-leg battles ended with a 4-1 victory of Kalmar, marking a good departure of Nanne Bergstrand, who left the team for the second time. In both legs, Jönköpings dominated the ball, had more passes but failed to score enough to secure a draw. So, how did Röda Bröder managed to defend well? This tactical analysis dissects the defensive tactics of Bergstrand, and explaining the solutions of Jönköpings to cope with the press.

When Jönköpings played in a 3-5-2 formation, Bergstrand favoured a 4-2-3-1 team shape on paper. This sets the foundations of the press and the positions of players defined their duties off-the-ball.

In the first game, the young Nils Fröling started as the lone striker, supported by another young player – Isak Jansson. The experienced Emin Nouri played as the right-back while Piotr Johansson partnered Viktor Elm at the central of the defence.

Since Nouri was injured at Stadsparksvallen, P. Johansson was moved to the right-back position while Douglas Bergqvist was the centre-back. Also, Geir André Herrem replaced Fröling as the striker.

As mentioned above, the defence of Kalmar could be roughly divided into two parts – high pressing and midblock. This analysis focuses on analyzing how they were pressing the opponents high up on the pitch.

When pressing high, Kalmar players initially should stay in shape and occupying the central spaces. The striker should not initiate the press, but instead, waiting for the triggers to go out together. They would like to see the central defender of a back three plays to the wide centre-back, it was the trigger for the players to shift into a man-oriented defence that man-mark the options around the ball.

The marking duties are as shown in the below image as follow:

When the wide pass was made to the wide centre-backs, it was a signal to stick to the targets closely while having the left-winger pressure the ball. Thus, the opponents were unable to dictate the tempo and build-up as they wished. 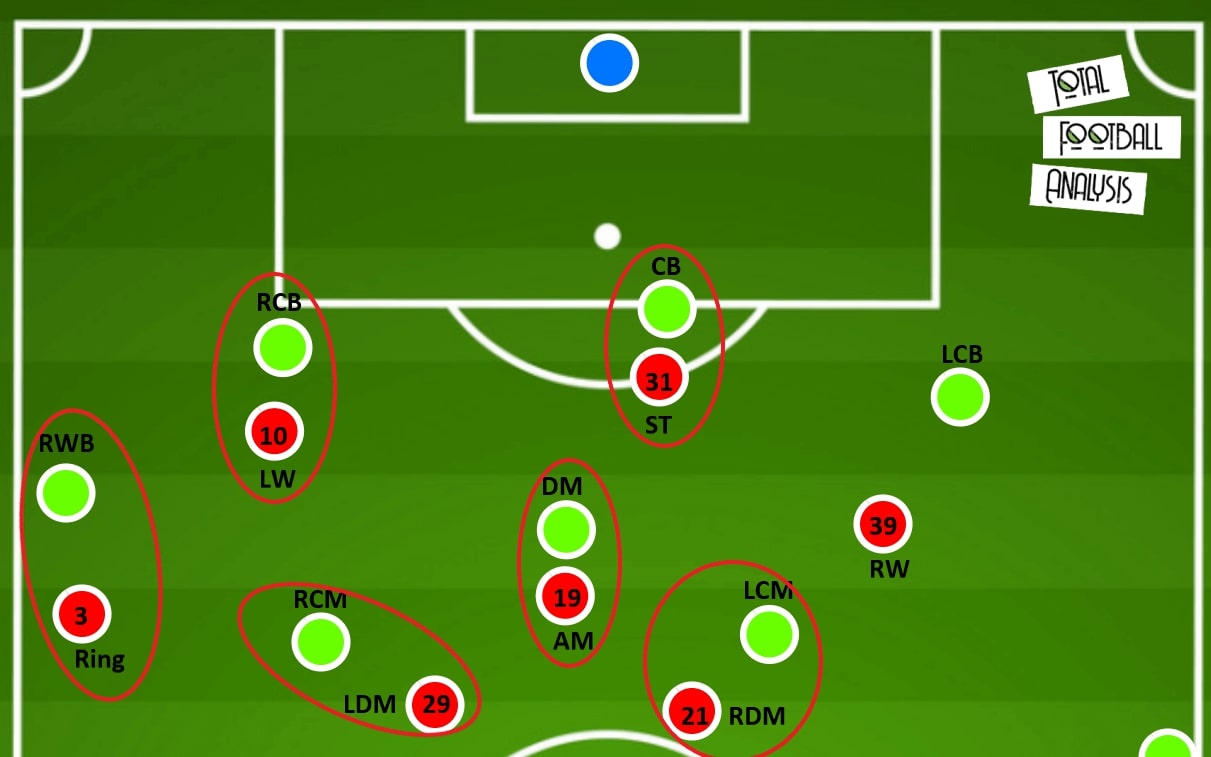 Here, Jönköpings’ first phase was in a back three shape, using a pivot to provide another layer and a wing-back supporting the ball. Since the ball was moved from the centre back to the right centre-back, the press was triggered.

Therefore, Fredrick Fendrich was tightly marked-by Jansson, while the left-winger: Filip Sachpekidis instantly moved out to press Pavle Vagić; since perceiving Elias Gustafson was dropping to provide an option for the ball, Ring instantly reacted by jumping onto his target.

So, you can imagine the situation of Vagić, who barely had any option to pass shortly. Jönköpings would have to go long without a clear intention, which was difficult to develop an attack. 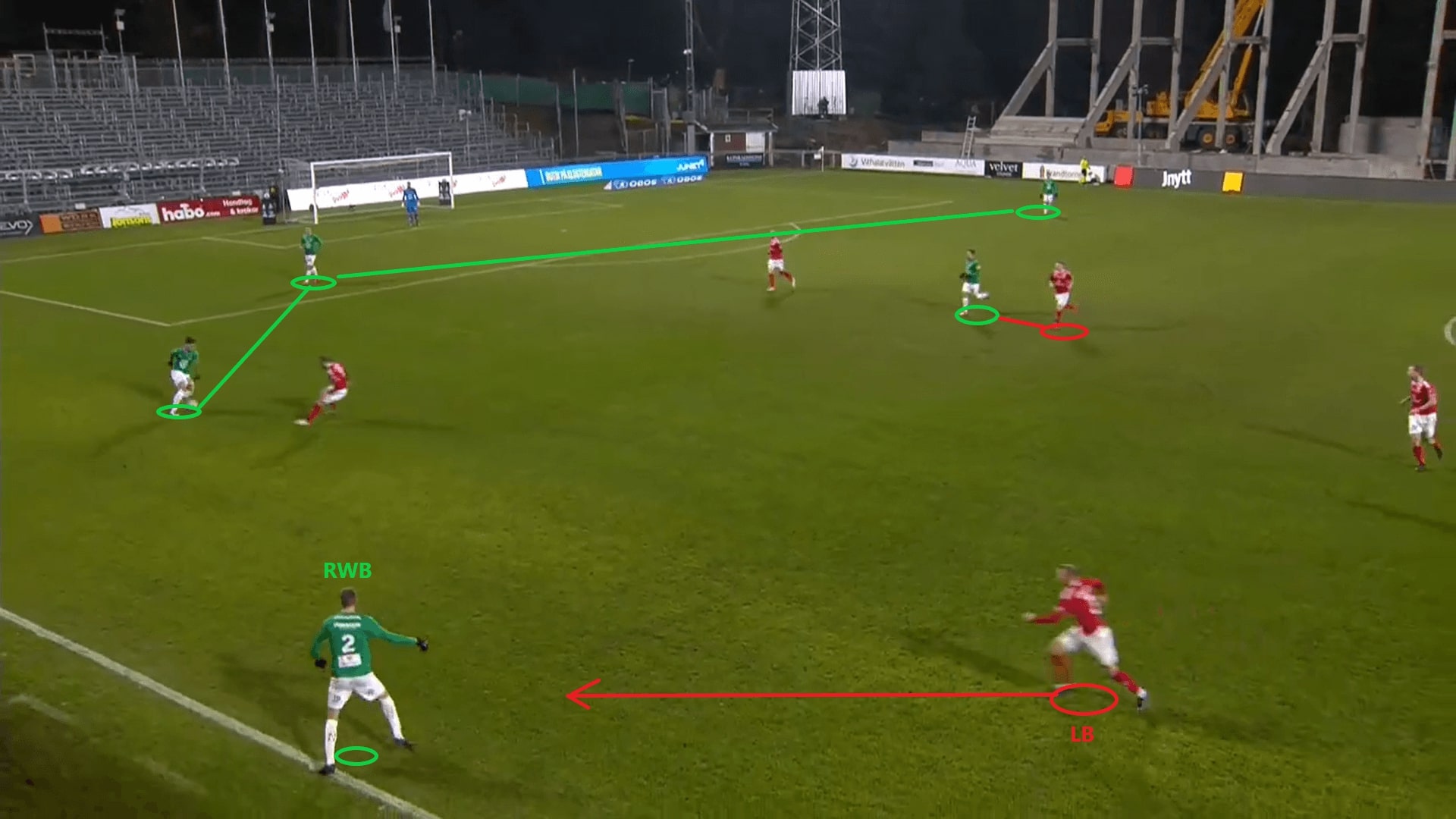 Since the press was man-oriented, the players prioritized covering the respective targets instead of compressing spaces. Therefore, spaces might be opened under some circumstances.

For example, if Jönköpings midfielders and pivot stayed away from the ball, spaces would be opened at half-spaces. The image below highlighted those spaces. 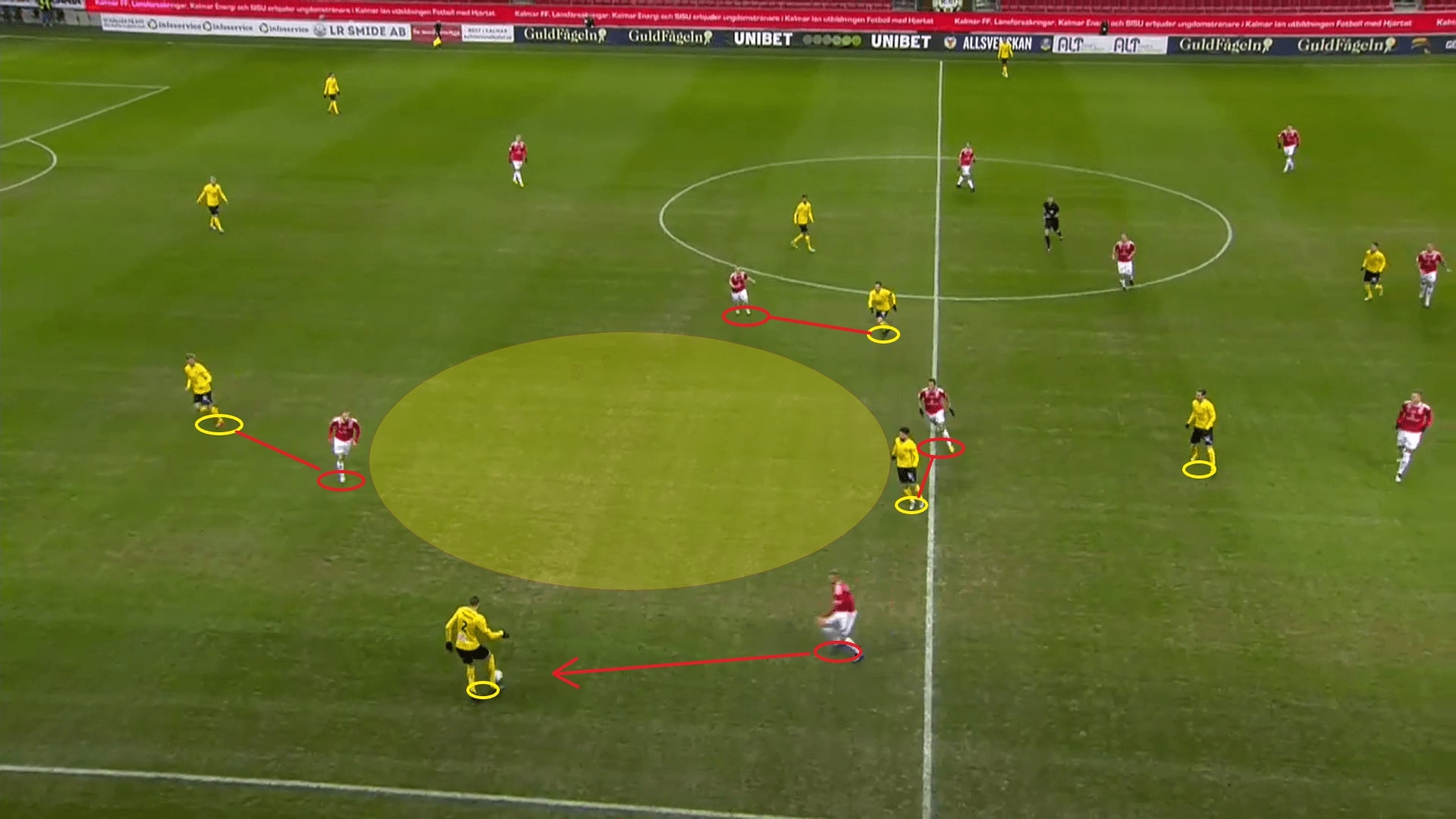 And because of the nature of this type of press, when spaces were available, the ball receiver might read it, carrying the ball into those areas with or without conscious. This was a possible solution to break the press, so the Kalmar players must be ready to stop the dribbler.

When Vagić diagonally entering the half-spaces, the Kalmar players could give up their original marking targets and overload that region. If they have done so, the carrier would be facing pressure from three or four different angles, which was difficult to get out.

In the scenario below, Vagić tried to bring the ball forward, but soon a possession turnover occurred as he was unable to cope with the pressuring players in tight spaces.

At the meantime, the midfielder of Jönköpings was dropping towards the ball, this movement invited the press and congested those spaces. This dropping behaviour was a point to note as Andreas Brännström’s team tweaked this part of the tactics later on. We will investigate their solutions further in the coming section 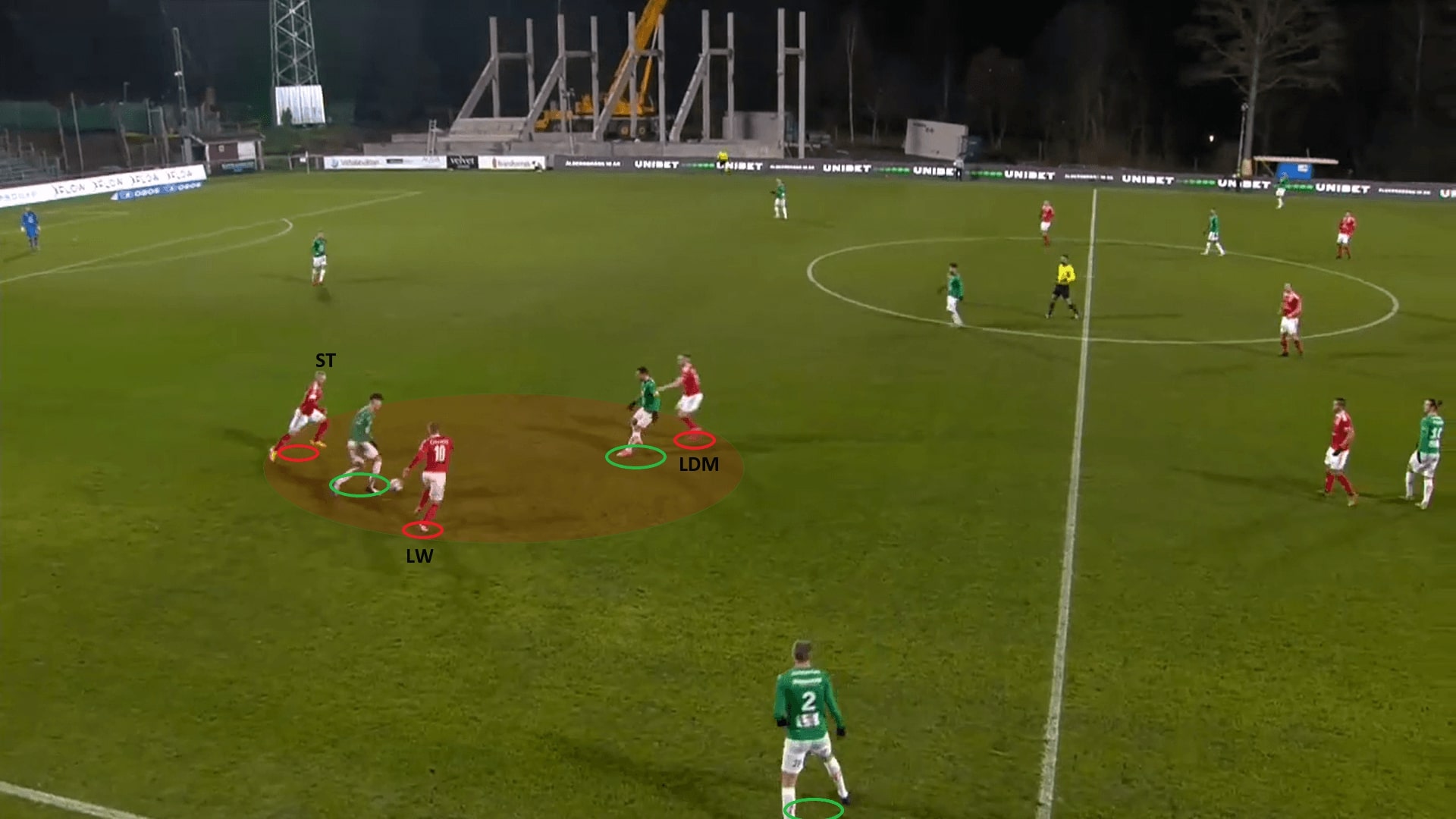 Jönköpings tried to find the solution(s)

Throughout different stages of the tie, Brännström was trying to break the press through introducing different tactical decisions. There are mainly two very notable ways to escape from the pressure that were introduced in this section.

The first one was dropping another midfielder as the free player to bring the ball forward. The below tactic sheet shows how this works on paper. As explained, Kalmar went man-to-man under specific conditions, so it was predictable on their behaviours.

Compared to the offensive midfielder, Romarinho and Erik Israelsson were more conservative to join the high press. If their targets dropped deep and in front of the centre-backs during the build-up, it was a decisional dilemma as the duo tried to protect spaces. This suggests the dropping player would be unmarked to receive the ball.

Therefore, when the winger could not close the diagonal passing lane when pressing the wide centre-back, the dropping player would be found. This shows a scenario which the striker, left-winger and offensive midfielder man-marked their targets. However, Amir Al-Ammari remained uncontrolled when he dropped deep. The pass would be made to the weak side of the press and Jönköpings had rooms to escape. 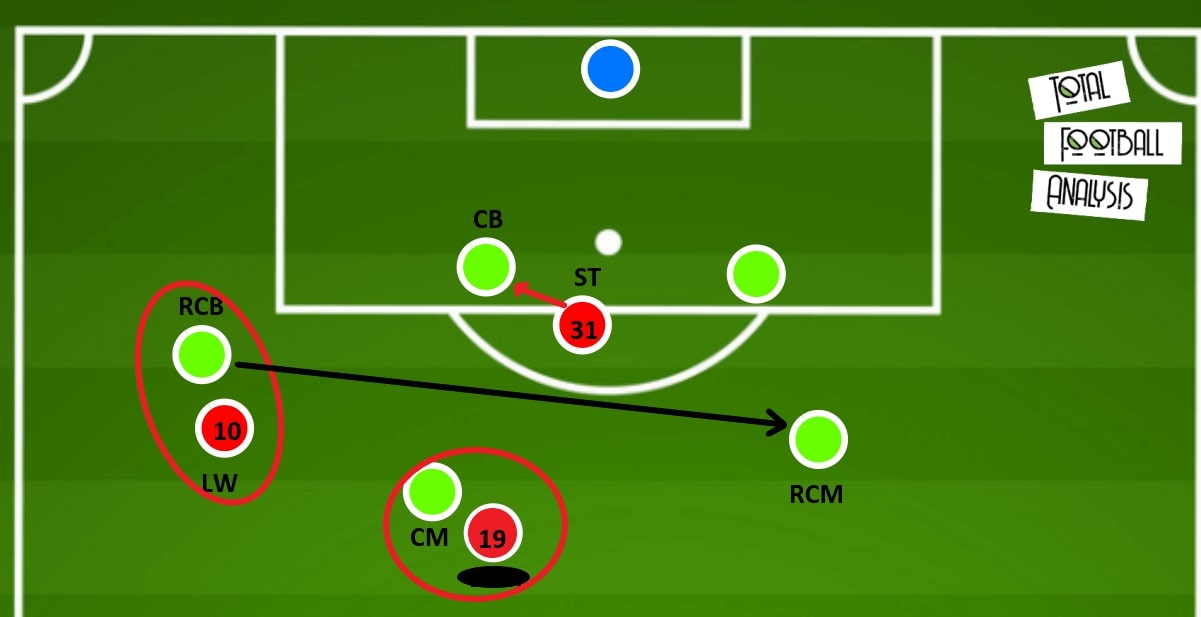 Another example here although the distancing and contexts were a bit different from the above one. This includes the concept of manipulating the opponents by decoy movements, it was useful against a man-oriented team when the defending reference points were the oppositions.

Here, Fendrich moved diagonally forward to open a diagonal passing lane for the dropping midfielder – Al-Ammari. In such a case, Jansson deliberately followed the pivot, while Sachpekidis was not close enough to limit the angle of pass. Vagić easily found Al-Ammari and Jönköpings progressed the attack on the left. 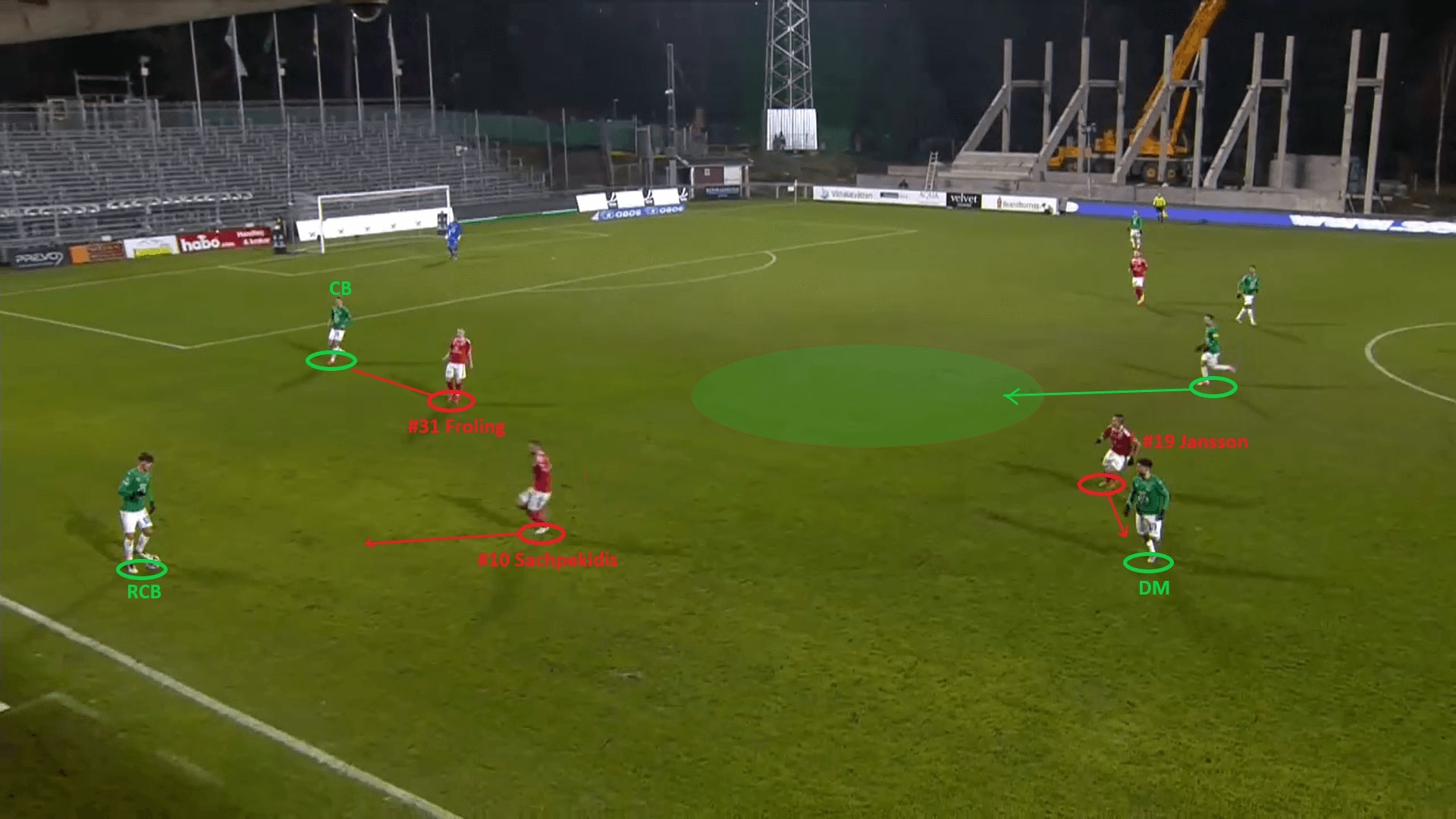 In the second leg, Jönköpings came with a clearer solution to exploit the man-oriented press of Kalmar. They capitalized on the reluctance of marking deep dropping players to create a numerical overload. Still, they allowed the Kalmar players to attach the build-up players according to the game plan, but one of the strikers would join this phase as a free player.

Specifically, this was Edin Hamdovic’s job as Jönköpings tended to build-up on the right flank. When his partner – Dzenis Kozica was providing the offensive height to manipulate the defensive line, Hamdovic could drop into the highlighted zone to create a passing option for the ball. When the Kalmar centre-backs were not aggressively, Hamdovic would be unmarked to turn, or vice versa, performing third-man plays. 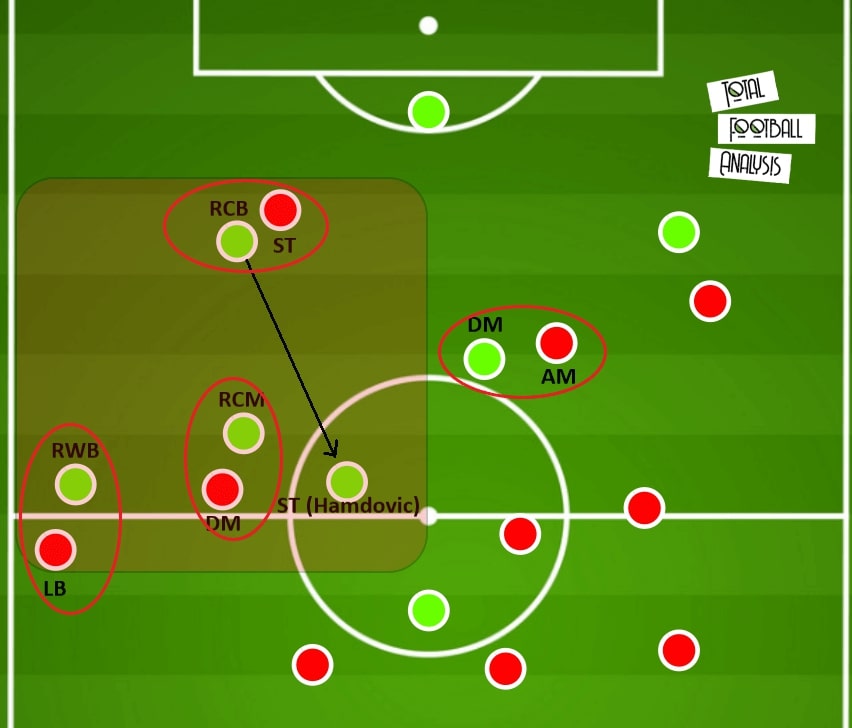 The below example combines all elements that we have explained in this analysis. Firstly, we saw the manipulation of players – the half-spaces outside run to exploit spaces behind run behind the left-back.

Secondly, players from the far-side moved towards the ball, as well as Hamdovic dropping deeper that escaped the marking of the centre-back. This means three options were offered for the ball, the attack had better dynamics and it was more difficult for Kalmar to defend. However, throughout the game, Jönköpings did not have enough quality in the final third to pose a greater threat to the goal. 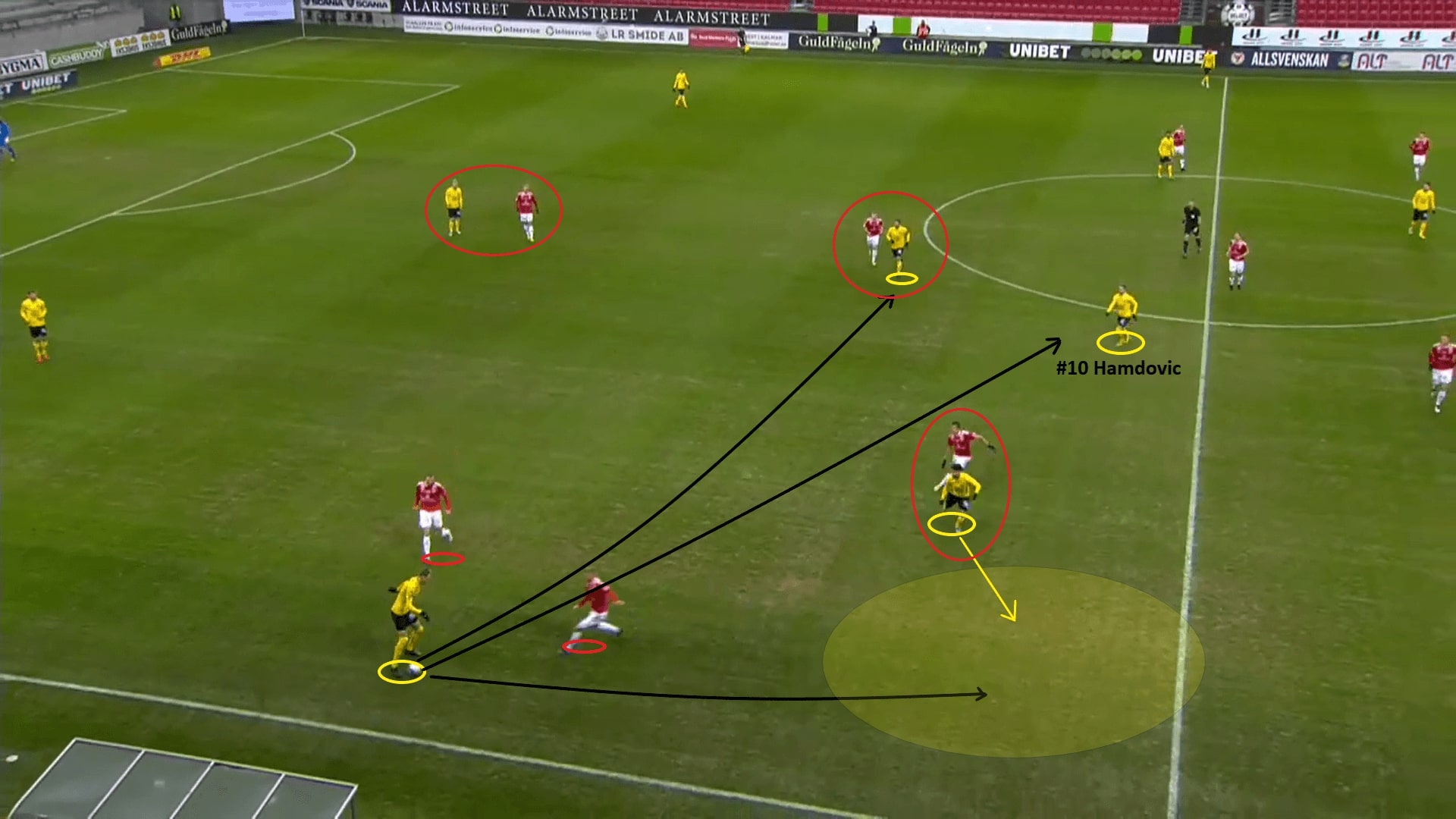 This was an intriguing tactical battle between Bergstrand and Brännström as both teams tried the best to win. Despite conceding a very early goal, Kalmar were not shaken, and they were clinical enough to guarantee a position in Allsvenskan 2021. Defensively, the way they went man-to-man in the press, which was a clear and strong game plan to limit the build-up of the opponents.