Yangel Herrera, the 22-year-old Venezuelan midfielder, has appeared distinctively for the Granada team in La Liga for two seasons while playing on loan from Manchester City.

The loaned young man was able to play in more than one position with excellent proficiency, as he participated in the role of the central defensive midfielder last season, and then played in central defence as well in an emergency.

Through this tactical analysis, we will see how he developed and played in new positions and showed a great personality that could play at the top level if he returned to Manchester City in the future.

Herrera is a modern midfielder in every sense of the word; the coach Diego Martinez can use him in his lineup in a variety of roles, where his usual tactic has been a 4-4-2 tactics. 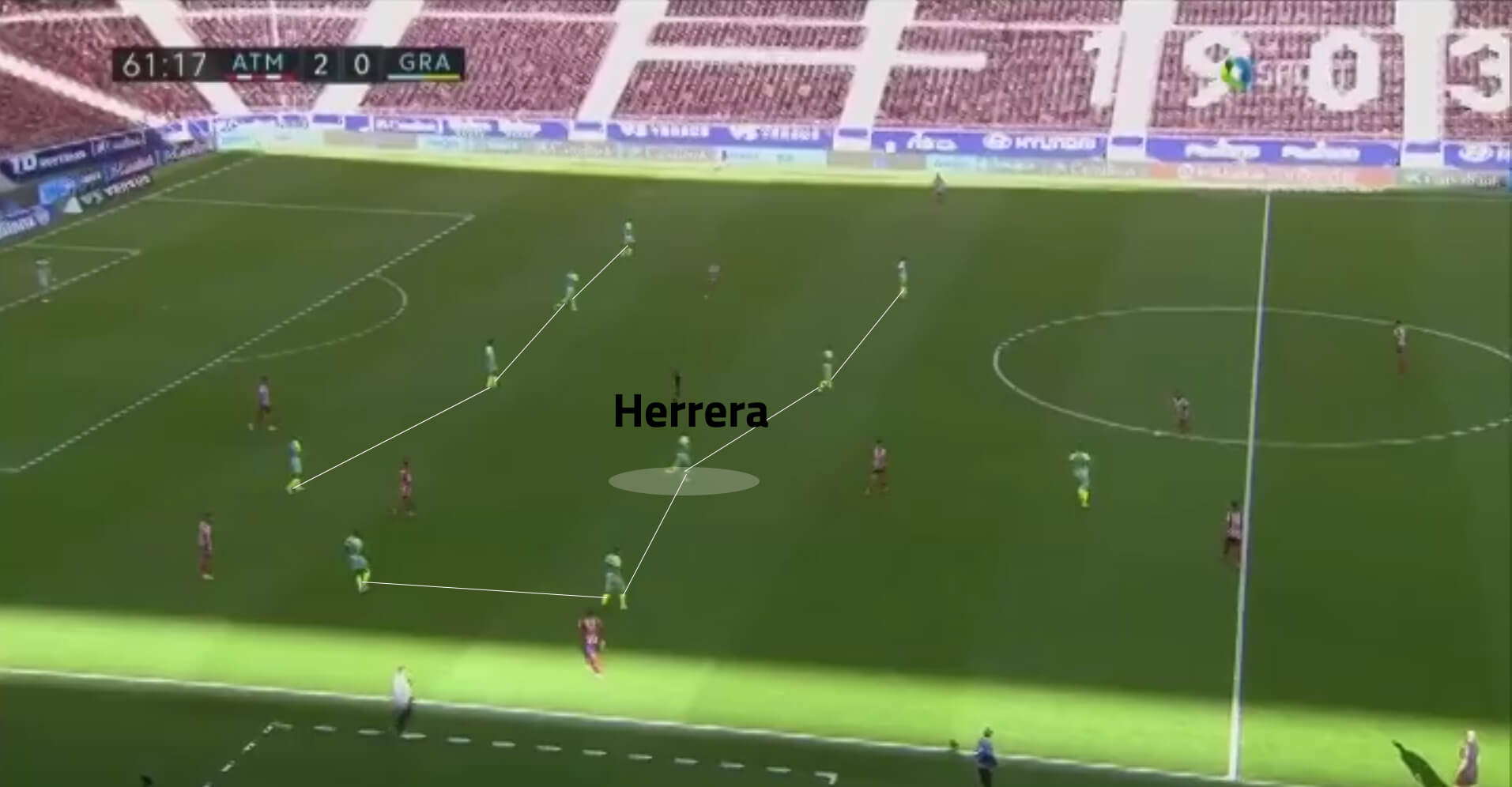 Here we can see Herrera positioning himself deep in the field with his willingness to press the vertical pass solution for Atletico Madrid, which is what happened when Koke passed the ball to his teammate.

Besides being a pivot in the foundation, the coach decided this season to give him new tasks by advancing as a playmaker in a position behind the striker as well, as we will see. 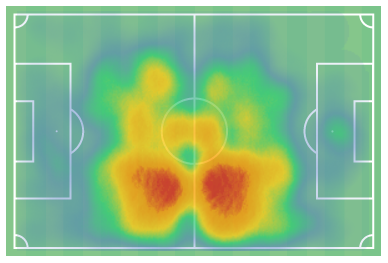 Moving vertically between his team’s penalty area and the opponent’s area, while going slightly towards the right flank to create numerical superiority with Dimitri Foulquier, the right-back, and Darwin Machís, the right-winger, is among Herrera’s straightforward tasks.

This season, in particular, his offensive liberation is more than it was last season, due to the diversity in his roles and duties. So far, he scored five goals in eight matches this season, while he scored two goals and assisted three throughout the whole of last season.

This tells us the difference between Herrera’s offensive tasks this season and last season.

Herrera can develop on the offensive side with full awareness of his role when losing the ball, but the most important thing for the Venezuelan player this season has been his vertical movement from the middle third of the opponent’s penalty area.

Coach Diego Martinez has worked on the player’s movement off the ball to make him a solution during counterattacks or possession play as well.

Of his five goals this season, two goals were scored in almost the same way as the ball is distributed to the flanks, and then Herrera moves to become the second striker in the opponent’s penalty area. The Venezuelan international is among the best in the La Liga midfield in terms of scoring, with an expected goal (xG) average of 0.5. 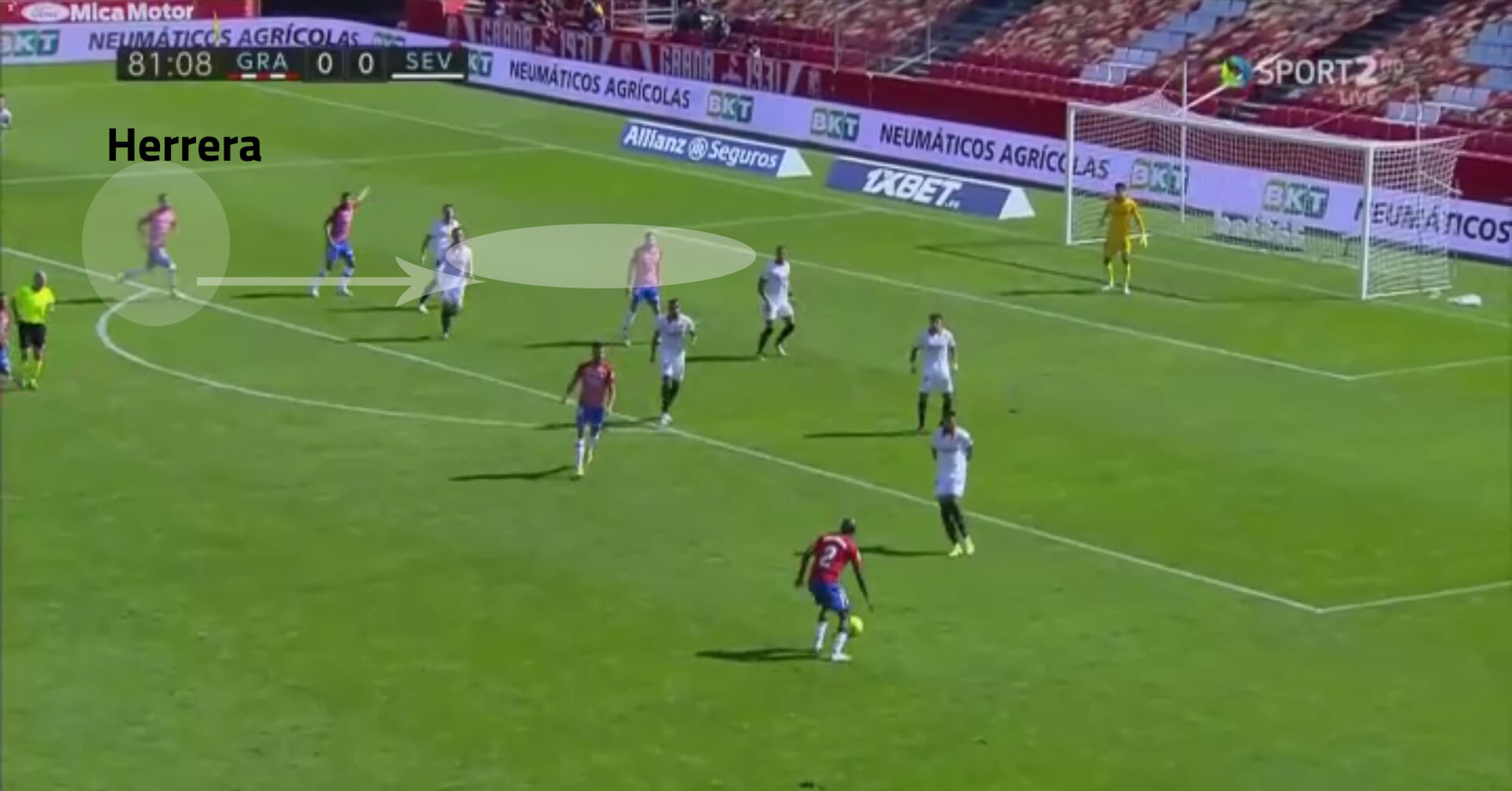 Here the ball is with Foulquier on the right side who is preparing to play the cross, with poor positioning from the Sevilla defence and the presence of spaces between the players horizontally. At the same time, Herrera is centred on the penalty area line. 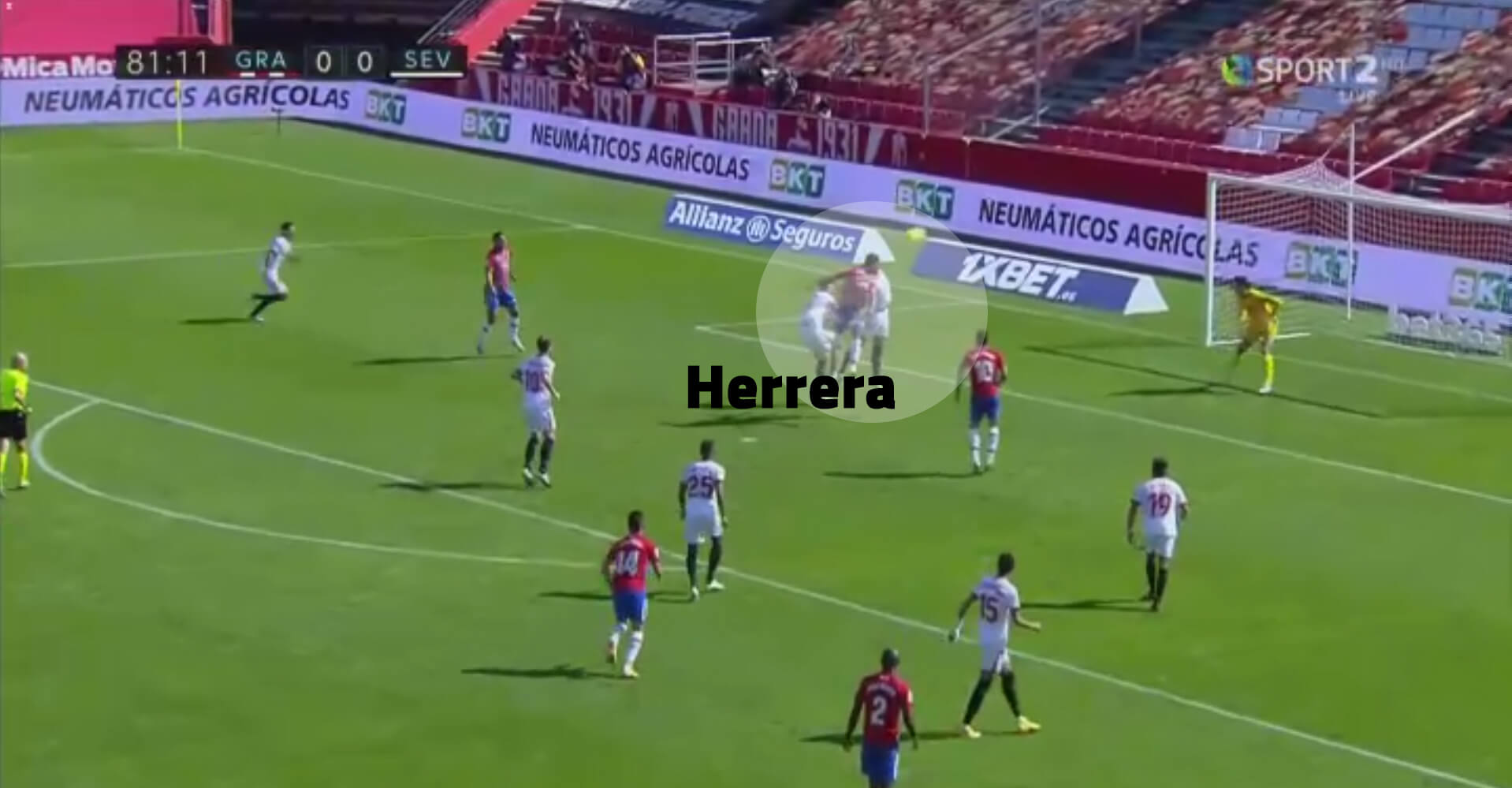 Here we see that he took advantage of the space to come in front of the goal with a good leap to get ahead of the defender, which gave him the power to direct the ball into the net.

The exploitation of Herrera’s height has always been a point of strength in aerial duels, which was mostly utilised in positions. However, this season it has been developed to be used offensively as well, as three of his five goals so far have been headers.

Herrera has taken 50 shots so far this season, including 29 with his favoured right foot, followed by 11 headed attempts, and this highlights the player’s value in that regard. 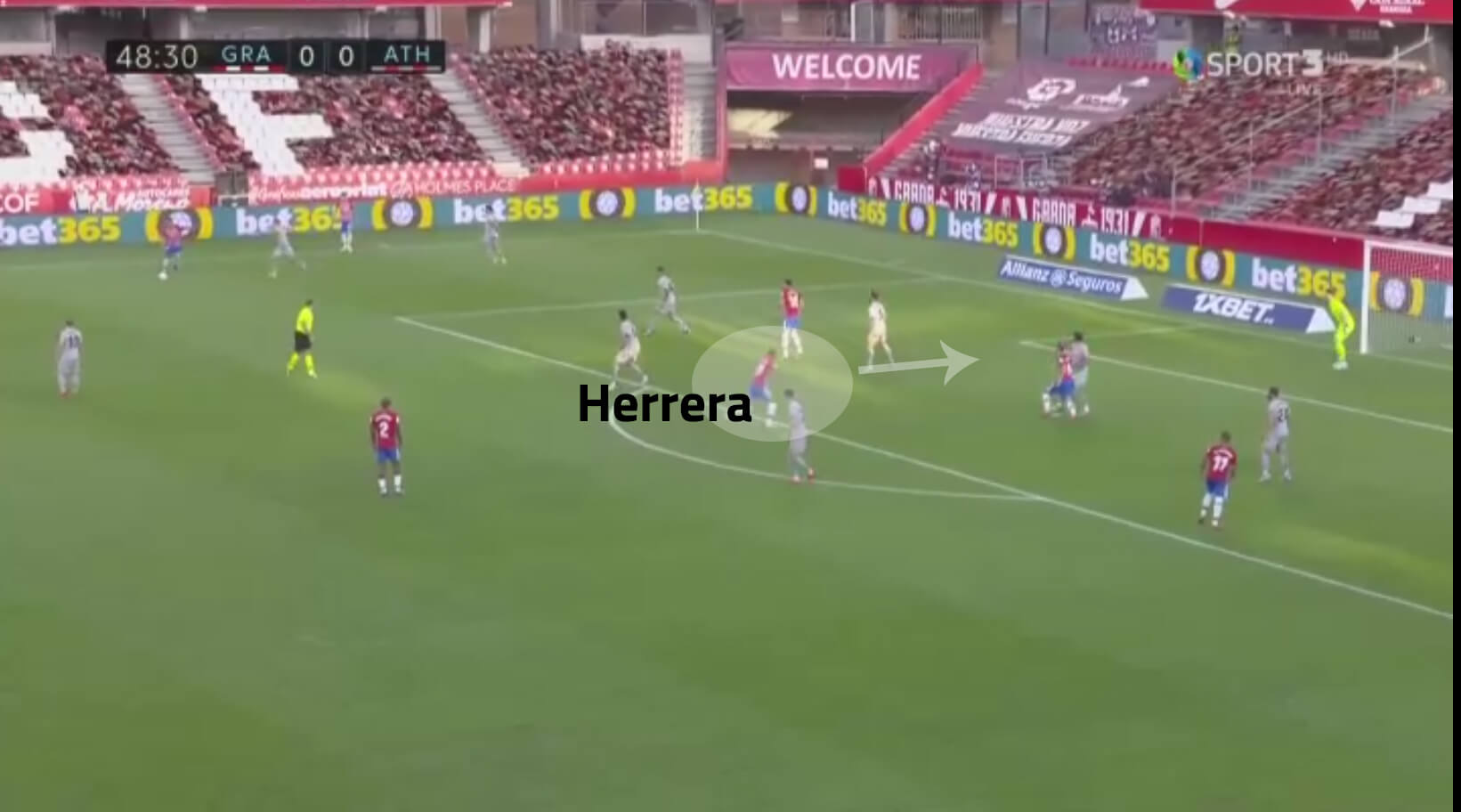 Again, we notice the same situation from the other side, the ball on the left side while Herrera is on the penalty area line and runs into the space behind the defensive line. This movement allows him to score another goal when the ball is sent into the box, having got on the centre-back’s blind side.

This can be a useful attribute at Manchester City, where the midfielders rarely make supporting runs into the box, specifically the duo of Rodri and Ilkay Gundogan.

Of course, this will depend on the way that Herrera is used – if he is part of a double pivot then his goalscoring instincts will have to be curtailed to a large extent. However, Herrera has reasonable control of the ball in the middle of the field, which means that he can be an effective contributor to Pep Guardiola’s style of play while also adding goalscoring impact if used correctly.

Herrera on the ball

Herrera does a good job on the ball as well, whether in terms of building up play from the back, or controlling the rhythm of the team, as well as spreading play out wide with switches of play. He has had a pass success rate of 84% so far this season, which is impressive considering that Granada are not an especially possession-oriented side, which makes his ability to retain the ball even more crucial.

Despite his height, he is characterized by movement in the middle of the pitch, as we will notice in the coming examples. 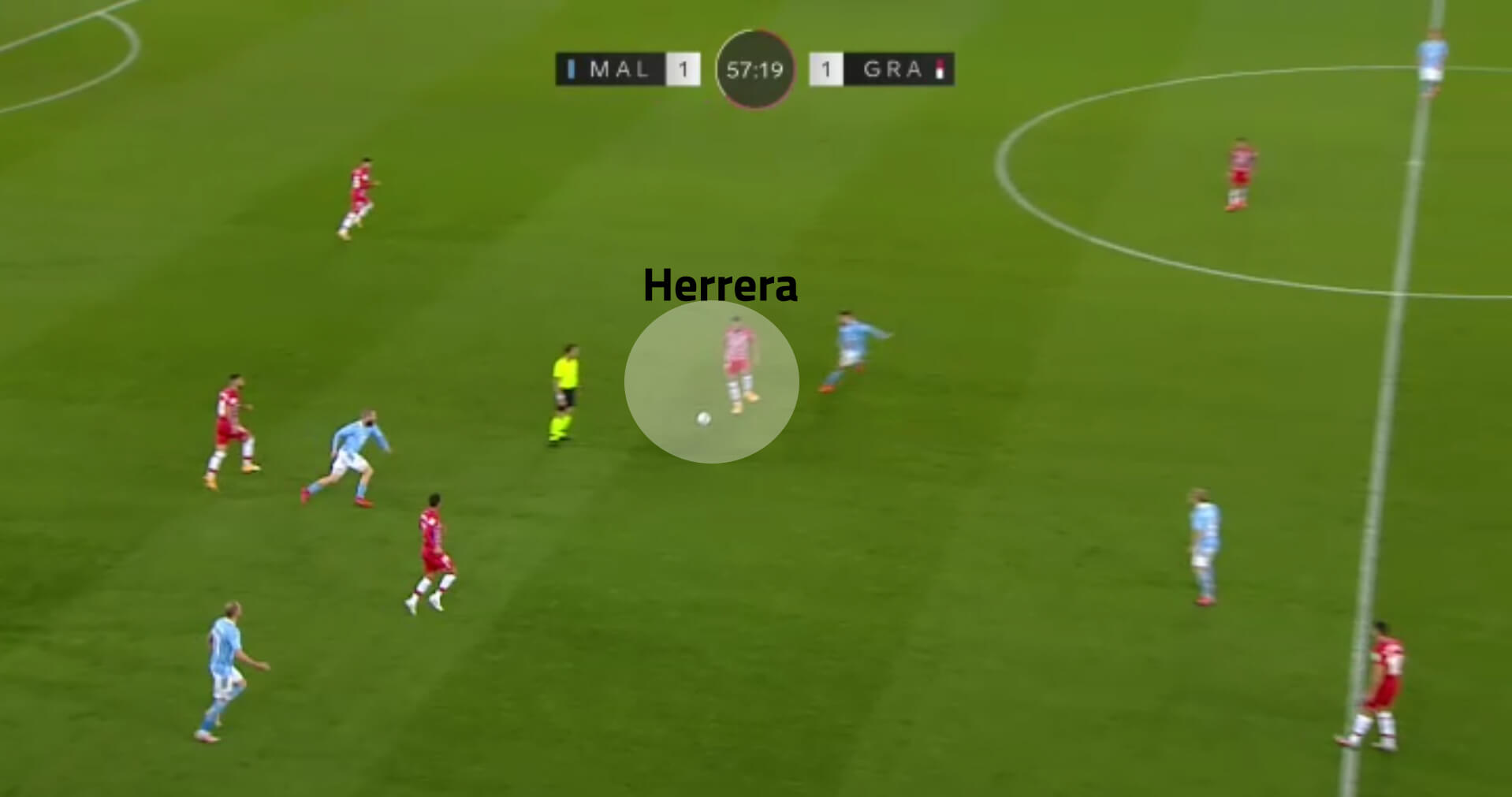 Here we notice that he is shielding the ball with his left foot to cover it from the Celta Vigo player and keep pressure off him so that he does not lose it, and this is an important ability for a midfield player to have to be able to play past pressing opponents. 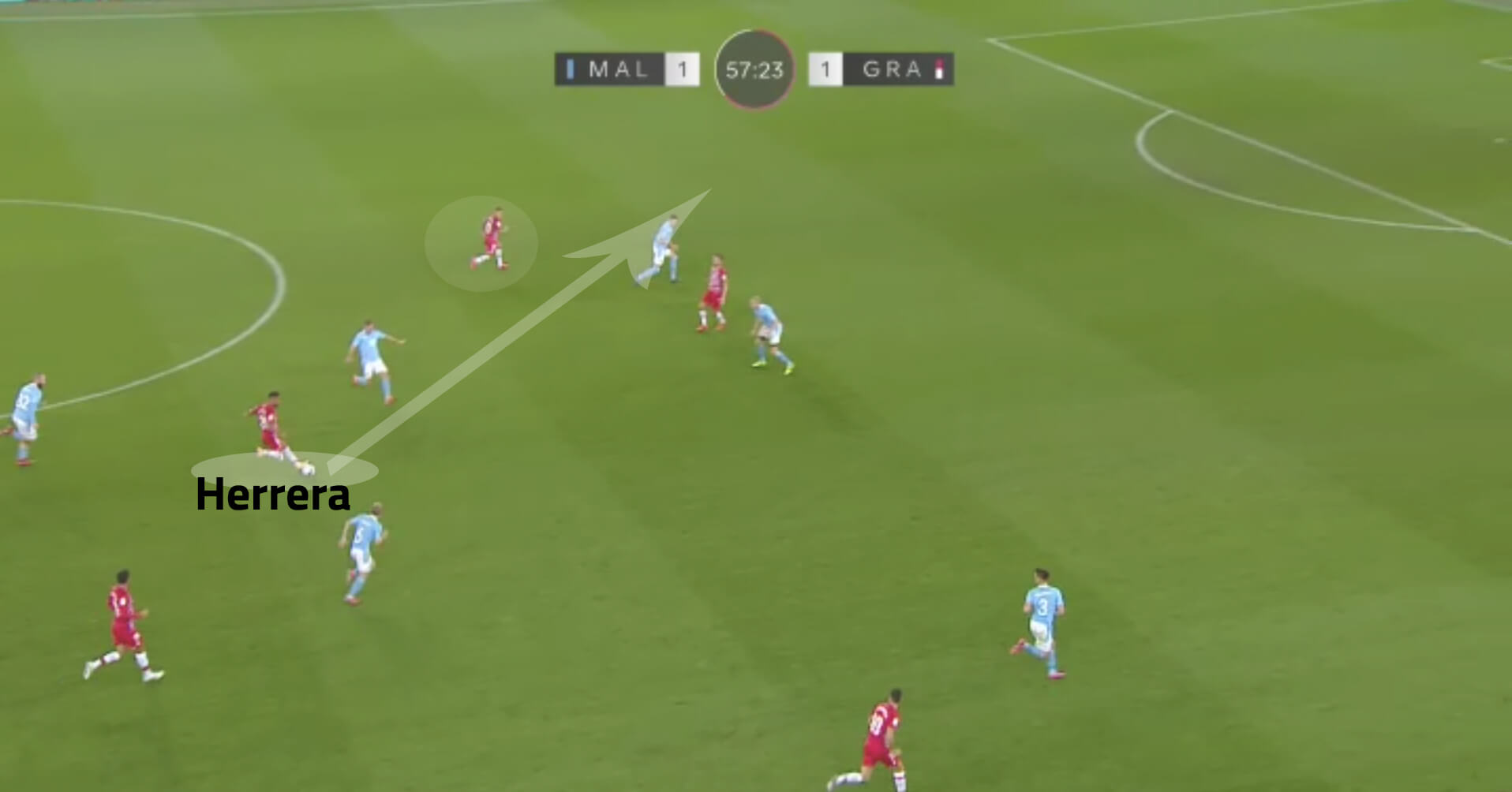 Here, he is able to spot the run from the Granada winger, as well as the space in behind Celta’s defensive line, and play a perfectly-weighted pass which allows him to run through on goal and shoot, rather than one that could have been overhit and thus forced him wide, or skipped through to the keeper.

He has made 11.29 forward passes per game, which suggests that he can be a good creative solution for City, especially if they need a more direct passer from midfield against certain teams, or during times when they are chasing the game. 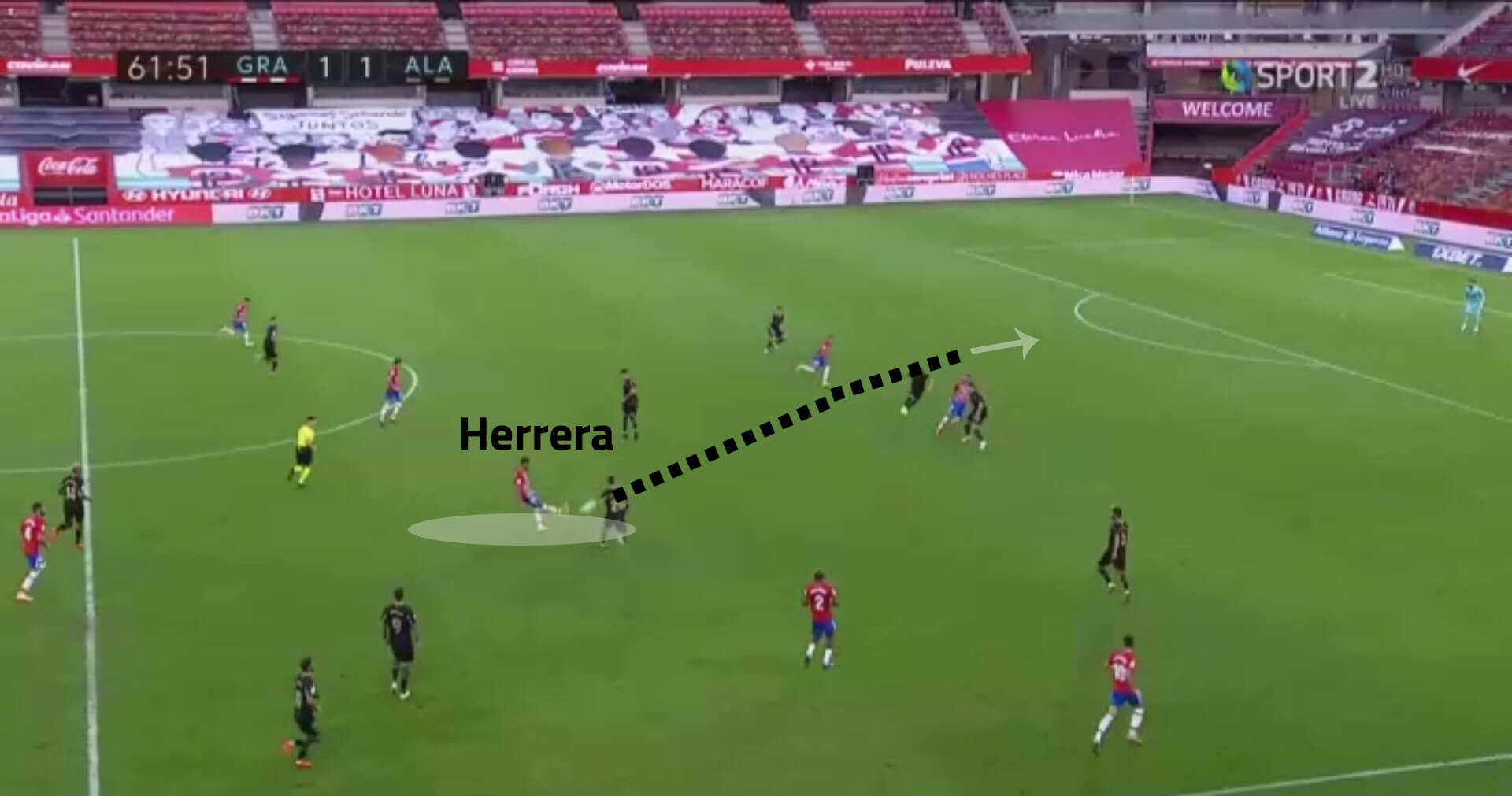 Here again we see a line-breaking pass from Herrera, where he manages to put his teammate through on goal. 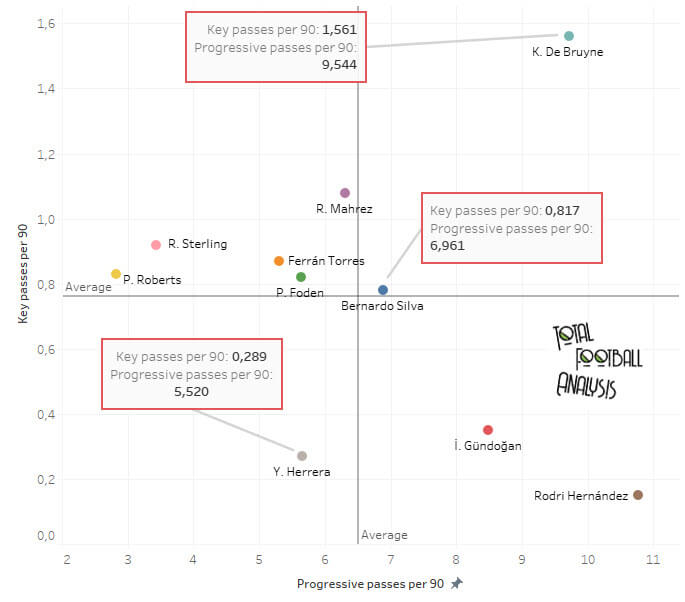 Comparing him to Manchester City’s midfielders, he does come out worse on both progressive passes and key passes per 90. However, it is important to remember that he has been playing for a side that enjoys far less possession and is much less attacking than Manchester City, which will therefore reduce his opportunities to make such passes in the first place.

The ability to break forward with the ball, or move the ball quickly from midfield to offensive areas, is an important trait to have in possession-oriented sides, and Herrera has shown that in a much less attacking side in Granada.

In addition, he is distinguished by his defensive ability as well.

While defending, Herrera has shown all the attributes of a good defensive midfielder, whether that is tackling, winning aerial duels or pressing the player on the ball. He has a high ball recovery rate, which makes him very influential, especially in the middle third.

We will see here how he can has been key to Granada’s work off the ball, especially in the middle third of the pitch – 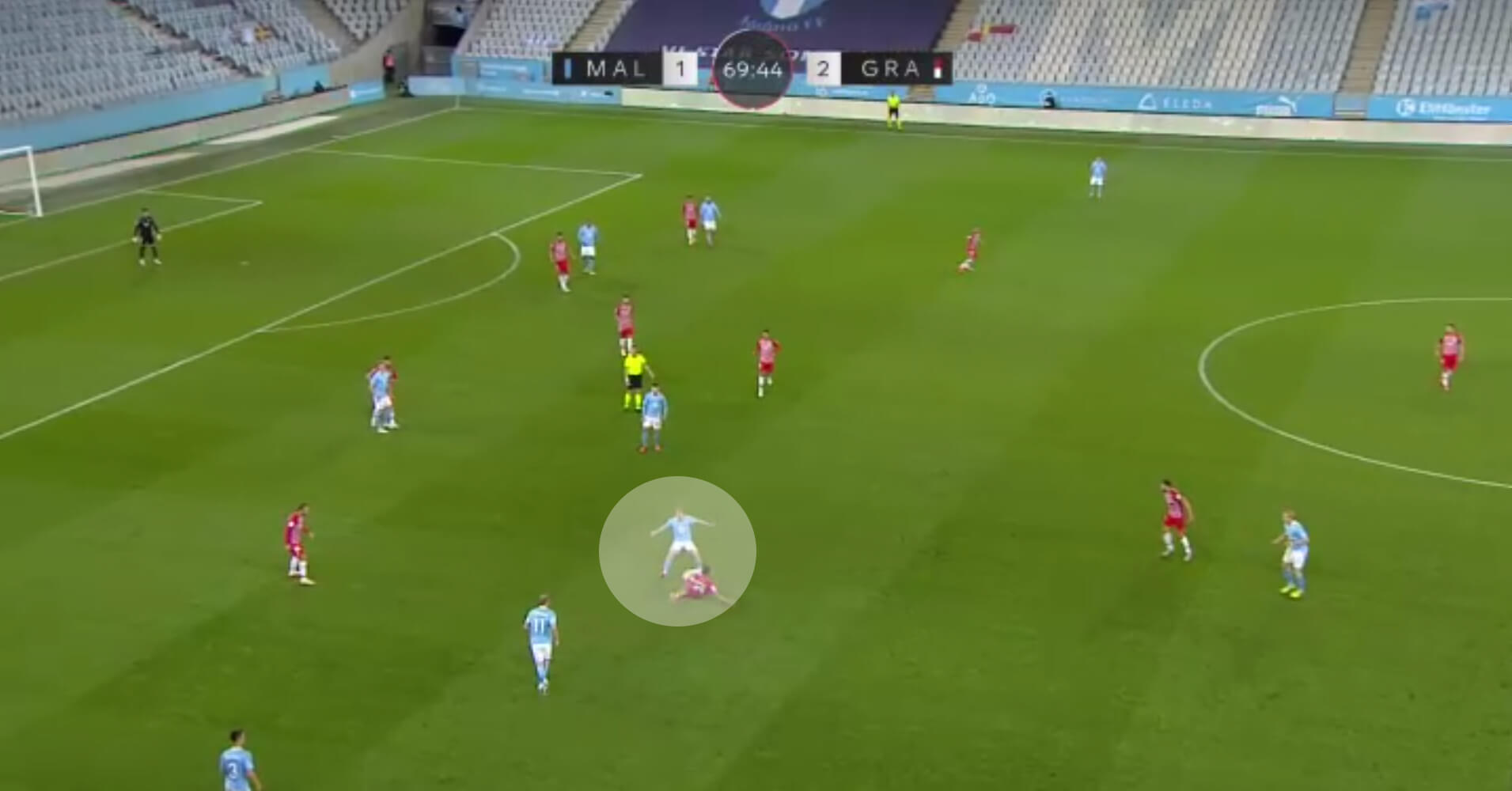 Here we can see his ability to tackle the ball and restore possession for his team. Herrera won 56 tackles out of 81 last season (69.2%), which is a number that demonstrates his ability to win back possession more often than not.

He also uses his height to win aerial duels as well, which is extremely effective when trying to win second balls or direct passes by the opposition. 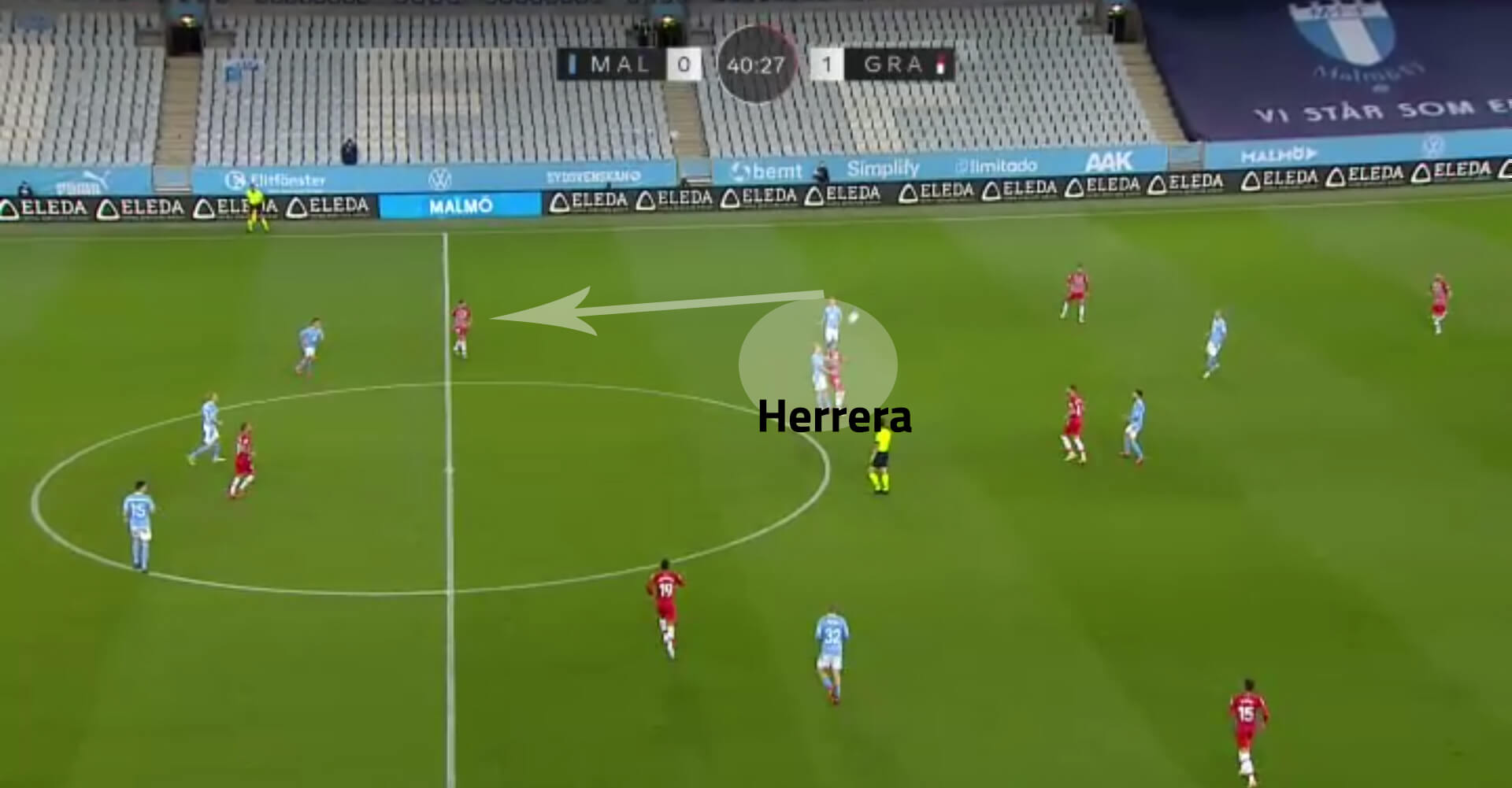 This is an example of such a situation, where he wins the header, flicking it on to his teammate and allowing Granada to win back possession.

Herrera is also an excellent presser, knowing when to put pressure on the opposition, and frequently using his physical attributes to take the ball away from the player on the ball. 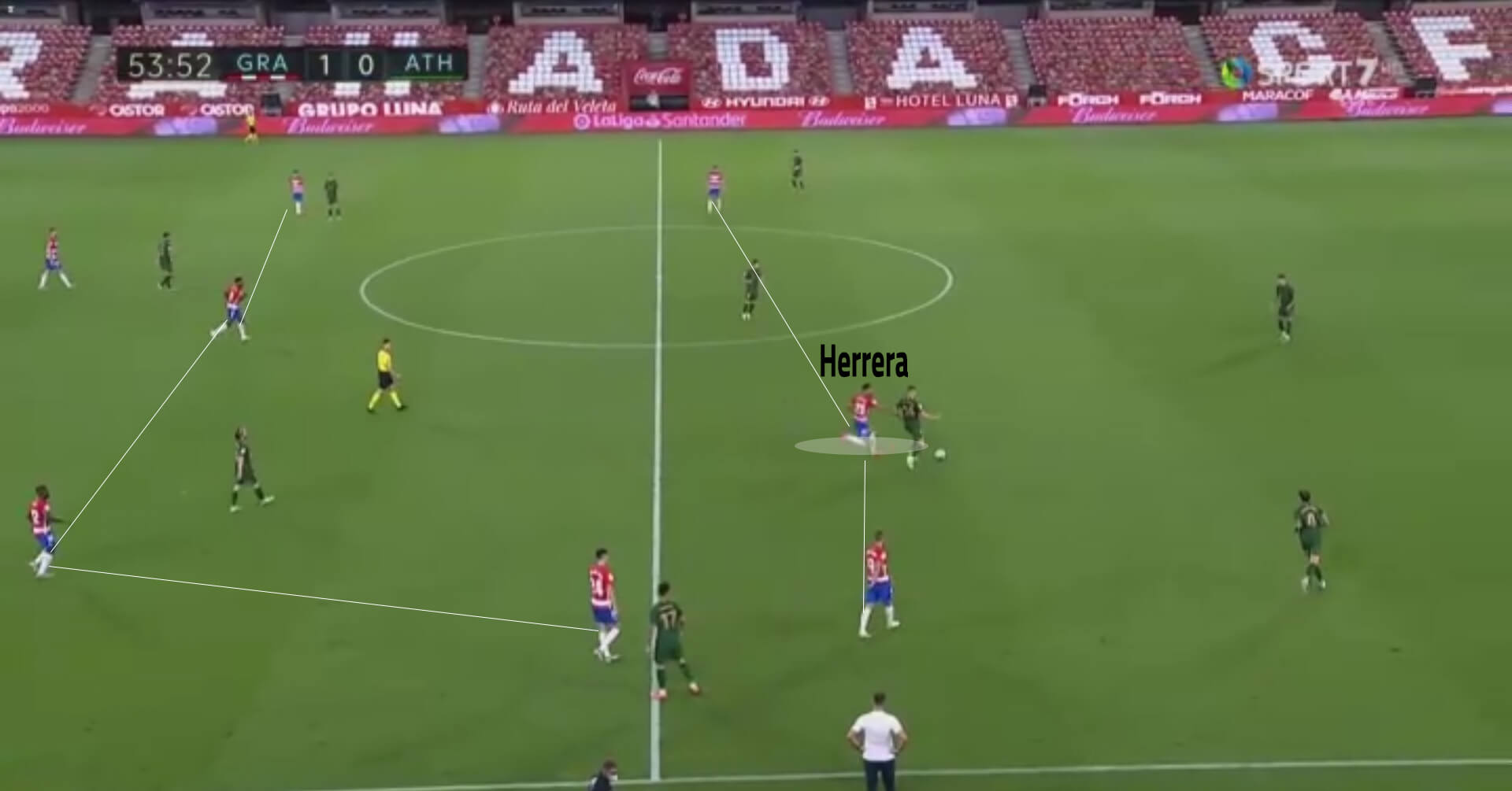 Here Herrera pressures the Athletic Bilbao player, forcing him to pass back, and is thus often the first line of defence for Granada.

In defensive duels and air balls, we can talk about Herrera’s outright advantage over the duo of Gundogan and Rodri.

Here in the Manchester City meeting against West Ham United, we note in the latter’s goal, the wrong positioning of Gundogan, the lack of progress and the pressure on the right-back who managed to create the chance for Michail Antonio.

Manchester City have suffered due to the low intensity of their defensive midfielders this season, as we will see below.

This sort of situation has already occurred quite frequently for City during their defensive transition. Rodri does not press early enough, allowing the ball carrier to advance, while Fernandinho has been left behind by the play. This allows Leicester City to advance into the box and win a penalty due to an error by a City defender. 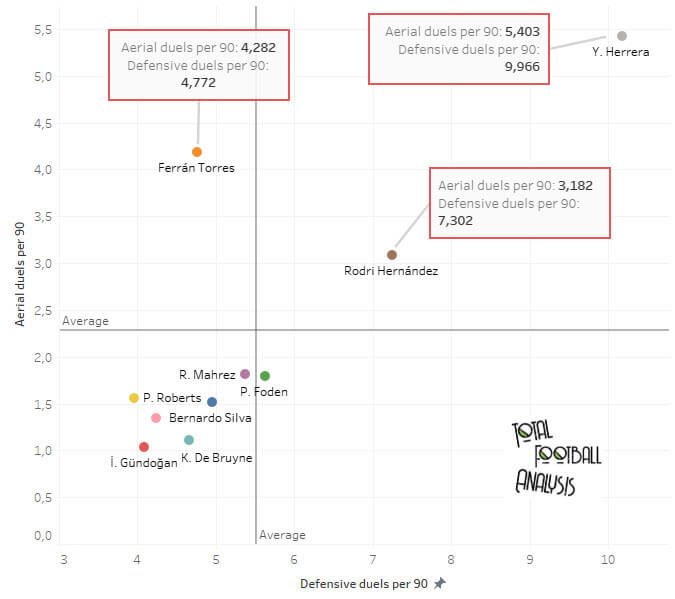 Comparing the Venezuela international with City’s existing midfielders, we can see that Herrera is by far the best of them for both defensive duels and aerial duels per 90. Again, this is conditioned by both teams’ respective approaches, where Granada are a more defensive side and thus will naturally make more defensive actions per game, but nevertheless, City’s struggles in defensive midfield over the last year or so mean that Herrera is an intriguing option.

Herrera is still quite young and has not played at the highest level yet, which does lead to an occasional loss of concentration, as well as a mistake or two.

The lack of focus makes him lose some passes in vital areas on the field, as we will see. 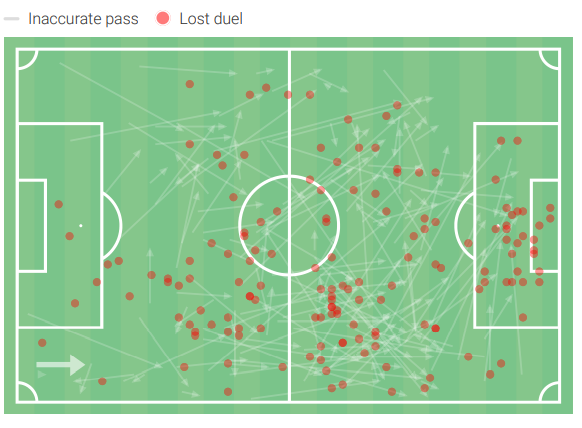 The map above shows Herrera’s inaccurate passes and lost duels. Despite the good work he does in both these respects, he loses too many duels and misplaces too many passes to be a straight fit in the City midfield at the moment, and thus will need to improve this side of his game to be a better option for Manchester City.

To add to this, he has also sometimes made the wrong decision off the ball, in terms of which player to press, opening up space for the opposition.

Here we can observe his positioning without discipline, as he does not press the ball carrier or drop back behind the ball either.

This could be a result of his changed role this season, where he has been asked to get into the box more and contribute in attack, which leaves him out of position while defending. Nevertheless, he will need to find a balance between these two aspects if he is to become a top-class central midfielder.

In this scout report, we have tried to shed some light on the work that Herrera has done on loan at Granada from City over the last two seasons, and whether he as at a level where he could be a potential option for the Manchester side in the future. Our analysis has shown that he is a player with potential, having some attributes which are definitely lacking in the Manchester City midfield at the moment. However, he will need to improve his game overall to have any chance of being an option for his parent club, especially under Guardiola. 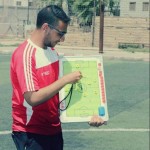