Under Florentino Pérez’s presidency, Real Madrid have won lots of trophies, including multiple Champions League titles. One of the main reasons behind this was his vision to bring football’s biggest superstars to the Santiago Bernabéu stadium, hence the Los Galácticos nickname.

Back in the early 2000s, huge names like Luis Figo, David Beckham, and Zinédine Zidane were landed to mark the start of the first Galácticos era. Then in 2009, the second Galácticos generation arrived. It consisted of Kaká, Xabi Alonso, and of course the great Cristiano
Ronaldo.

Madrid’s transfer policy of getting football’s best superstars hasn’t changed. However, they modified this slightly by focusing on getting the best young players from around the world. One of the teenagers landed for the next generation of Galácticos is Vinícius Júnior. This
tactical analysis will inform you about his role and impact so far for Madrid.

Vinícius Jr. is a winger. Most of the time he plays as a left-winger, but he can also play in the right flank whenever needed. The 19-year-old winger is known with his incredible pace on and off the ball. Such trait is important as Madrid’s squad is filled with tons of creative
midfielders who need runners in behind to be served.

So far this season Vinícius Jr. has played 1,363 minutes of football. From those playing time, the teenager has managed to score four goals and created three assists across all competitions. On top of that, he already scored against huge rivals FC Barcelona and assisted
in a Champions League knockout round against Manchester City. Quite a respectable feat in his first full season at the club.

Flexible on the left flank

In this first part of the scout report, we’re going to take a look at Vinícius Jr.’s role in Madrid’s attacks. Mainly, the Brazilian would hug the touchline and provide the width for his team. This would help Madrid to stretch the opponents’ backline when attacking. In the process, he could allow one midfielder or the left-back to come inside and attack the half-space. 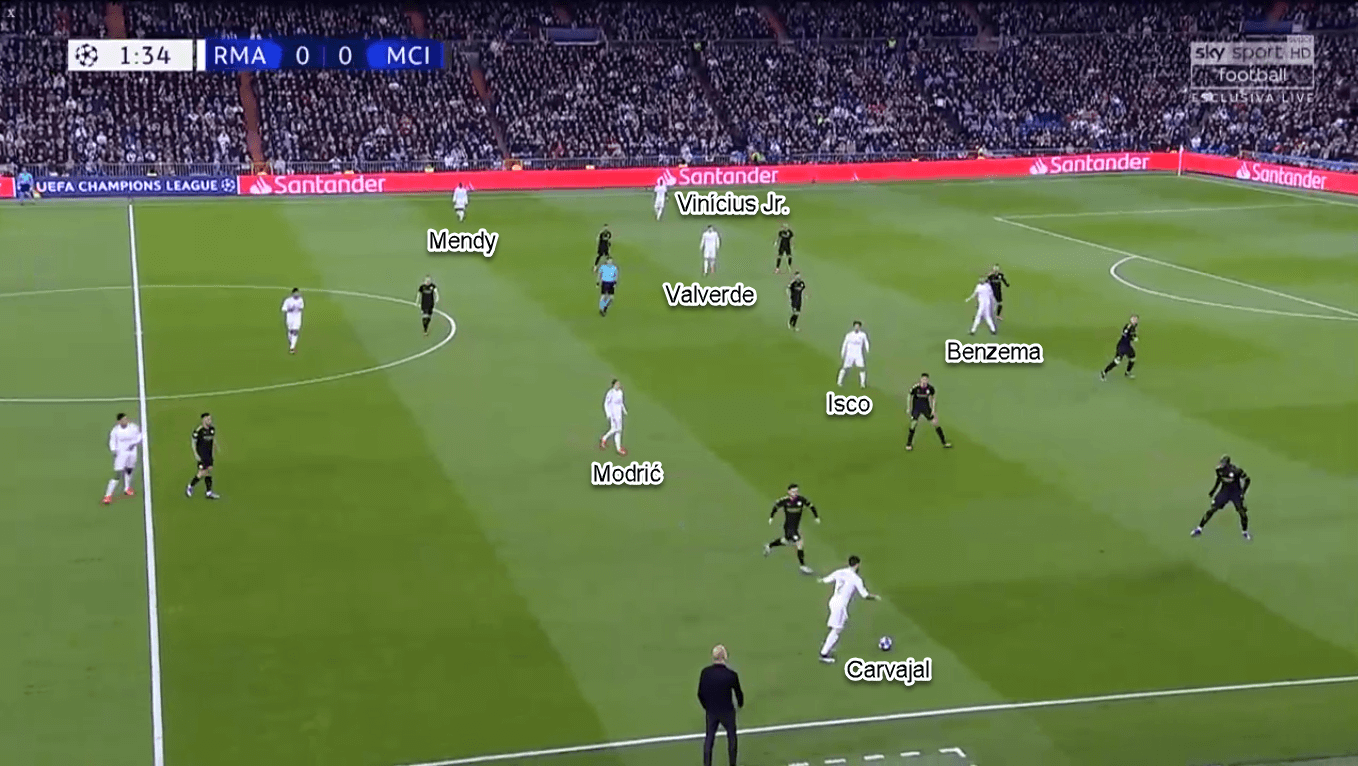 The Brazilian hugs the touchline while Ferland Mendy and Federico Valverde stand inside the half-space.Vinícius Jr.’s positioning in the wide-area also serves another purpose for his team. When Madrid couldn’t find an opening in the right flank, they could quickly switch the play to Vinícius Jr. in the other flank. Either a central midfielder or one of the centre-back will be instructed to make the diagonal pass whenever needed.

However, the 19-year-old can also tuck inside and play in the left half-space. In the process, he would pin the opponents’ right-back with him and allow the flank to be left open. Then, Madrid’s left-back can bomb forward and even make an overlapping run in the left flank. In
short, Vinícius Jr.’s flexibility compensates for whoever is playing as a left-back for Los Blancos; from the agile Mendy to the versatile Nacho Fernández, as well as veteran Marcelo.

As mentioned previously, Vinícius Jr. is gifted with an amazing pace. He can utilise that ability in various ways. First, he would use this when he hugs the touchline. In there, Vinícius Jr. would start as wide as possible and stand in parallel with the opponents’ backline. By doing that, he allows himself to be out of his marker’s eyesight. Furthermore, this would confuse the defender whether to focus on the ball or to the Brazilian. Vinícius Jr.’s wide start gives him another advantage. It allows the winger to be more positionally advanced, and have
a split-second lead in the footrace.

The same tendency also happens when he’s tucked inside. His pace will also be his main weapon to enter the final third. Previously this scout report suggested that whenever Vinícius Jr. is playing inside, the left-back would provide the width. For many times, either Marcelo, Mendy, or Fernández would pull an opponent with them, especially when they have the ball.

The particular marker would likely be the opponents’ right-back. The aggressive movement from the right-back then could open a gap inside their defensive block; between him and the nearby centre-back. This is where Vinícius Jr.’s pace comes into action. He can attack the opened gap and then hope to receive a through-ball from Madrid’s on-ball player.

Tendencies in the final third

In the last third, Vinícius Jr. prefers to keep using his speed and drive to the byline. After that, he would either try to make a shot for himself or serve others with a cut-back. For a fact, the youngster is one of the most active La Liga players inside the box. The statistics show that
Vinícius Jr. has 112 touches inside the opponents’ penalty area; seventh-highest in the league.

Even though he likes to drive into the byline, Vinícius Jr. can also vary his approach in the final third. Alternatively, he would slightly cut inside and try to find one of his attacking comrades with a cross; either to the penalty-spot area or to the far post.

Not only that, but Vinícius Jr. could also be found in the receiving end in Madrid’s attacks. Quite often the youngster arrives into the box as a potential cross receiver. This would happen when he tucks inside when Madrid have the possession. Then, his left-back partner would have the ball in the wide area and allow Vinícius Jr. to come into the box.

By starting from the half-space, the teenager could also come into the box if the cross comes from the right flank. Mainly he could be found arriving between the penalty spot and the edge of the box to receive a cut-back from his teammate.

Catch him if you can

Vinícius Jr.’s pace is very important for Zidane’s tactics. As explained before, it’s very useful when Madrid try to attack the space in behind when they enjoy possession in the opponents’ half. However, it doesn’t stop there. The youngster’s incredible speed is also handy in
transitions.

Primarily, one of Zidane’s men would try to find Vinícius Jr. with a ball in behind in the transition. As a left-winger, he would often stretch the opponents’ backline in counter-attacks before penetrating diagonally. Not only that, but the 19-year-old can also initiate transitions
on his own. His good ball-control combined with trailblazing pace allows him to carry the ball forward in Madrid’s counter-attacks.

When carrying the ball, Vinícius Jr. likes to take his marker out as quickly as possible. In the process, he utilises his incredible pace as well as space around them. Then, when the defender tries to close him down, Vinícius Jr. would make a last-second sharp turn to get free from his
marker. No wonder that he’s often getting fouled by his marker(s).

Under Zidane, Madrid often deploy a man-oriented high-press. This system is chosen to prevent the opponents from building their play smoothly from the back. In the process, Madrid rarely press the goalkeeper. Instead, they would close every nearby passing options
available for the goalie.

In the man-oriented high-press, as a left-winger, Vinícius Jr.’s task is to close down the opponents’ right-back. However, he would not follow the defender tightly. Instead, he would be tucked inside a bit. The objective behind this is to keep a respectable distance within Madrid’s defensive lines and help them to reorganise easier when defending zonally in deeper areas.

When the opponents try to build their attacks from Madrid’s right side, Vinícius Jr. would shift his position accordingly. He would leave the right-back and close down the nearest opponents’ centre-back. This is important for Madrid to keep closing all nearby passing
options for the on-ball opponent.

Whenever Madrid allow their opponents to enjoy possession, they would retreat to a mid-block 4–1–4–1. Sometimes they would also vary a bit into a 4–4–1–1 or 4–4–2 with Casemiro joining the midfield line in front of him. In this zonal-marking, Vinícius Jr. stays as
a left-winger and will only press when the ball goes wide.

Being one of the most highly-rated youngsters in today’s football doesn’t mean Vinícius Jr. is a perfect gem. He has some flaws and weaknesses in his game, both offensively and defensively. This section of the analysis will explain about the Brazilian’s potential issues.

First, it seems that Vinícius Jr. is not a good crosser. Despite his tendency to cut inside and send crosses into the box, his distribution ability is below par. The stats show that Vinícius Jr. attempted 2.7 crosses per 90 minutes in La Liga. However, on average only 0.5 (22.72%) of
them went into a teammate.

Vinícius Jr. is also not yet an elite dribbler. Indeed he can utilise pace and space to take defenders out. However, he doesn’t have much more in his bag. He rarely uses dazzling stepovers or any kind of trickery to get free from his marker. This issue would rise into trouble whenever the defender can close Vinícius Jr. quickly and force him to lose the momentum from his run.

Defensively, Vinícius Jr. lacks focus and awareness. Quite often he would focus too heavily on the ball and allow the opponents’ right-back to bomb forward aggressively. In the process, the right-back could receive a ball inside Madrid’s defensive block. Even worse, he could combine with his teammate(s) or drive to enter Madrid’s penalty box rather easily.

The Brazilian is an incredibly quick winger who can also adapt easily with his teammates and his team’s tactics. Vinícius Jr.’s traits are very important for Madrid, either when breaking a deep block or in counter-attack situations. He will only be 20 years old this summer, making
him one of the most promising youngsters in today’s football.

However, Vinícius Jr. needs to add more to his game. He can’t only rely on his trailblazing pace all the time. Instead, he needs to be more creative on the ball to make himself more unpredictable. With the likes of Eden Hazard, Isco, and Karim Benzema as his mentors, it will be very interesting to see how the ‘baby Galáctico’ develop in the upcoming years.