South America has been the go-to place for scouts to look for attacking players, especially strikers. One such South American talent who is shining at New York City FC is Valentín Castellanos. The 23-year-old striker has so far been involved in 20 goals this season in his 26 appearances and almost contributed to 45% of his team’s total goals this season.

In this tactical analysis, in the form of a scout report, we will be performing an analysis on the Argentinian, looking at the key tactics that make him a standout among the other strikers in the MLS.

Castellanos started his career in 2015, playing for an under 19 Chilean club before being loaned out to CA Torque — an Uruguayan club that bought him in 2018. He was then loaned to New York City before being bought by them in 2019. 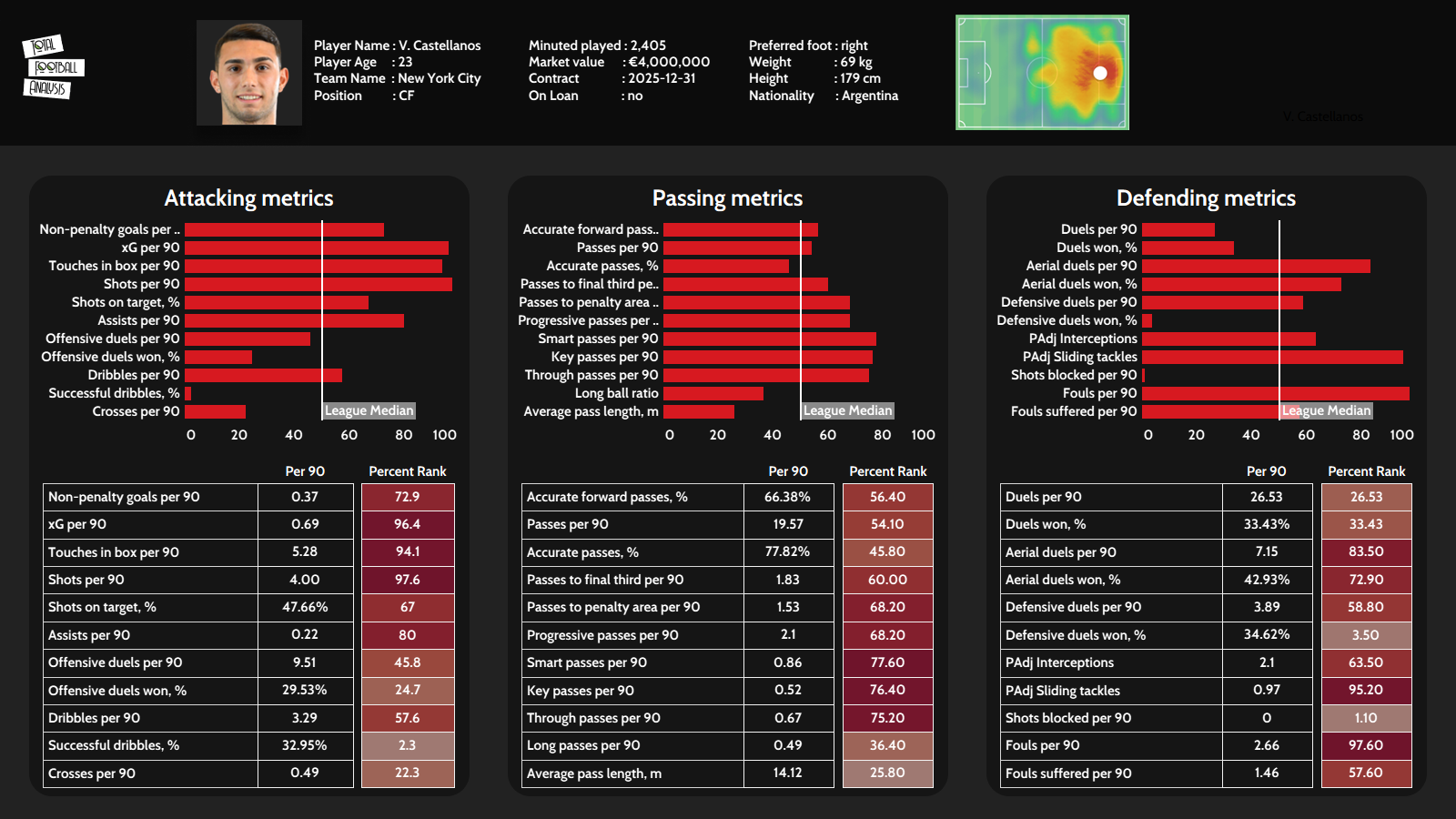 The 179cm tall striker who weighs 69kg is physically imposing and loves to play within the box. One can see that he attempts as much as 19.57 passes per 90 but makes sure to create opportunities with the limited passes that he makes. From the player profile, we can also see that the player is active in the defensive phase of the game — especially excelling in aerial duels.

He averages a goal every 173 minutes, which is really good given his age and how he still has a long way to go. His ability to attack and occupy space is his strongest asset and something we will analyse further in the upcoming sections of this scout report.

First and foremost, we will be analysing what Castellanos is best at — scoring goals. This season, as mentioned earlier, he has found the back of the net 13 times and assisted seven times, hence, he’s been involved in 45% of the team’s goals. 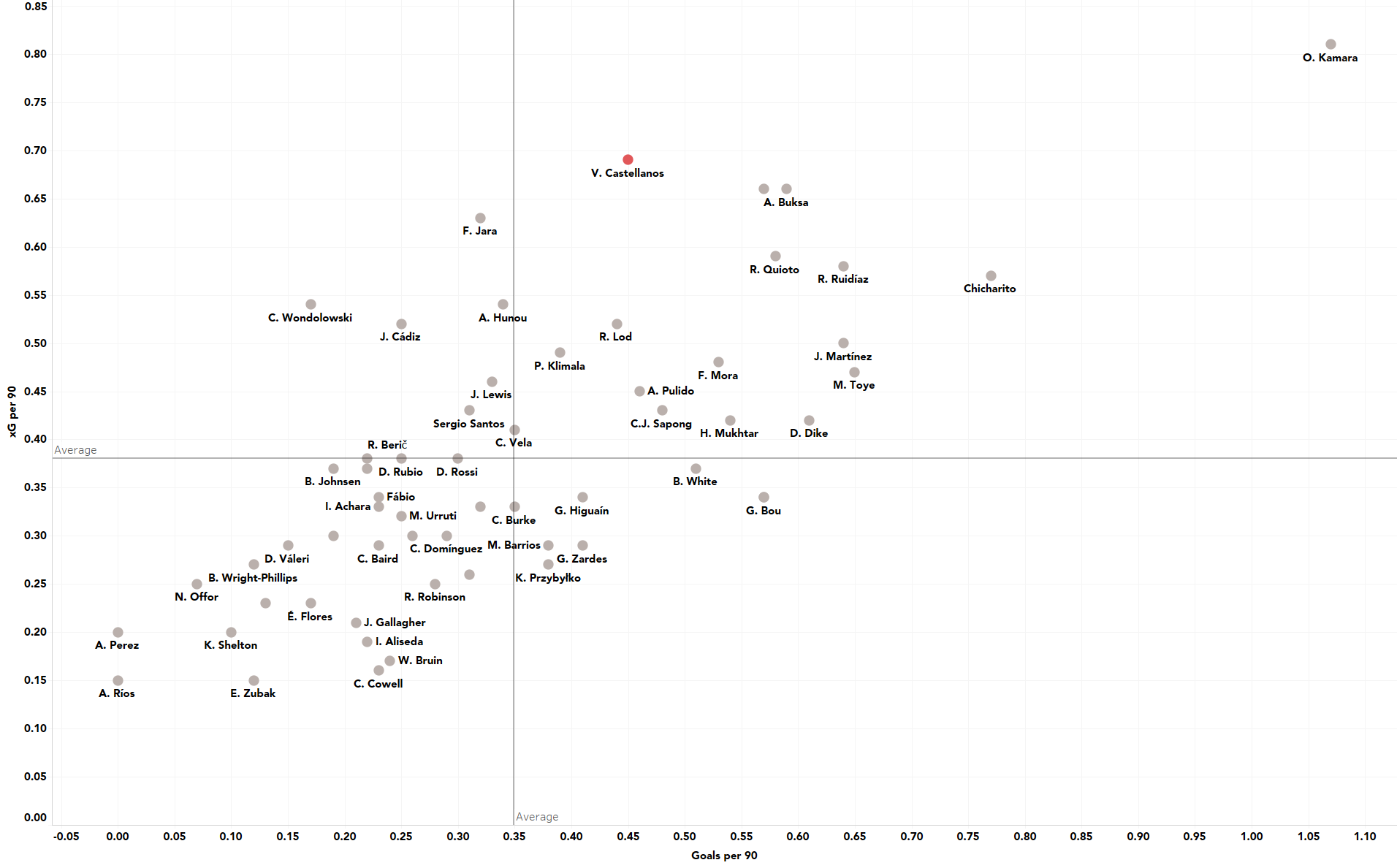 He averages an xG per 90 of 0.69, pretty much indicating the number of goalscoring situations he puts himself in. Meanwhile, he has a goal per 90 average of 0.45. He’s underperforming his expected goals and the variance is because of the number of attempts that he takes and the number of goalscoring opportunities he creates for himself. He sometimes tries to convert opportunities that aren’t even realistic. But in the scatter, we can notice that he is comfortably situated above average in both the metrics taken into comparison. 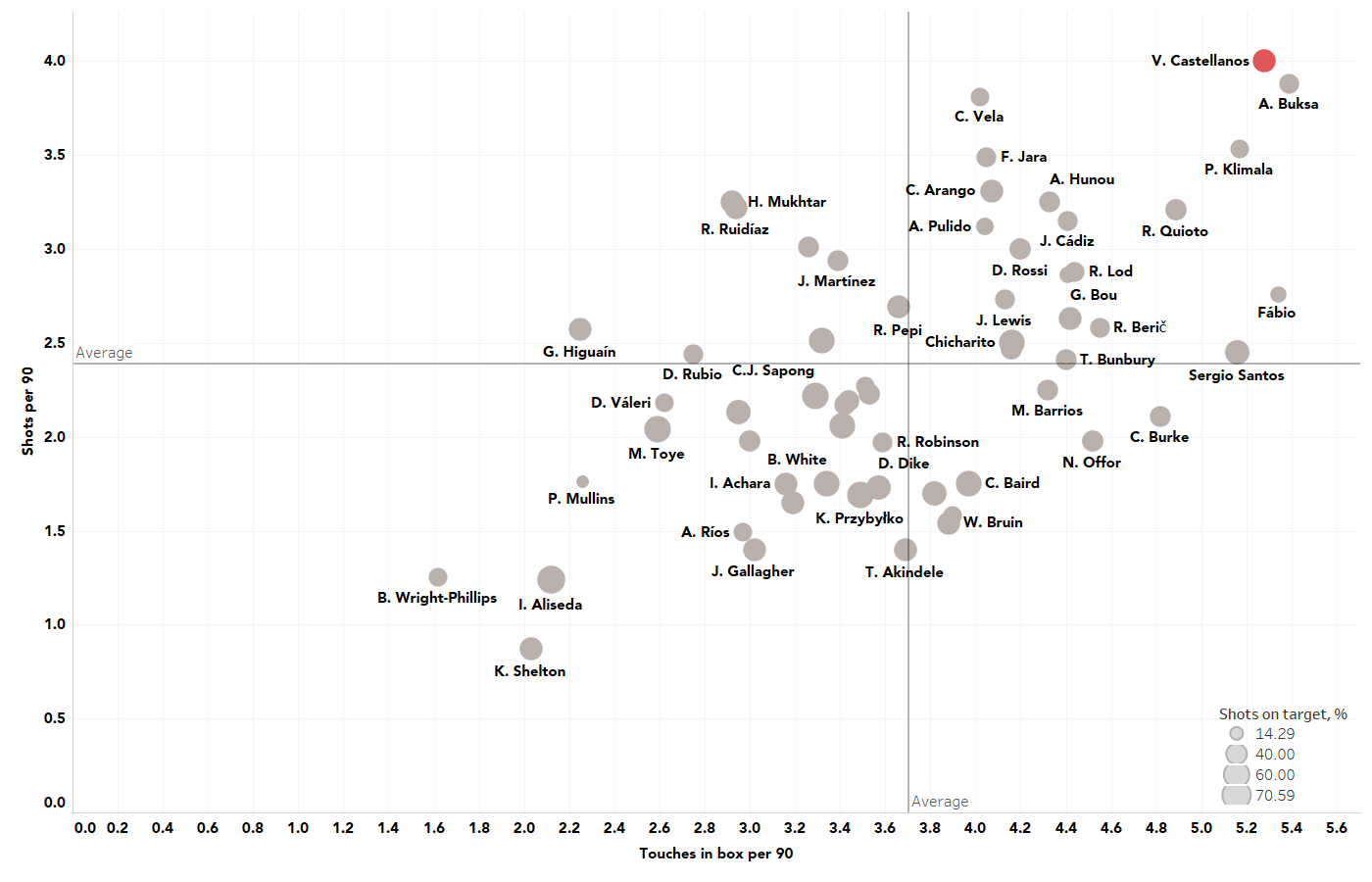 To support our statement that he creates many opportunities for himself, we now try to analyse his shots per 90 along with their accuracy and his number of touches in the penalty box per 90. It’s pretty evident that he likes to lurk inside the opponent’s penalty area as we can see that he has the third-most touches in the opponent’s penalty area per 90, standing at an average of 5.28. In terms of shots per 90, he has the highest (4) among all strikers in the entire MLS with a very good accuracy of 47.66%.

One factor influencing his numbers is his ability to finish well. He can comfortably finish with both feet and is also a wonderful header of the ball. Apart from this, his link-up plays are very good and so are his off-the-ball movements.

New York City FC plays in a 4-2-3-1 where Castellanos operates as the sole striker. His role, apart from being inside the box as a poacher, is that he often acts as a false 9 and drops back, attracting the defenders to create space for the left and right attacking midfielder. Since his role involves such a tactic, he has been really good at linking up with the other players and mostly prefers to play with his first touch.

He also adds in the creativity near the penalty area, looks to play one-touch football and acknowledges every pass by his teammates. 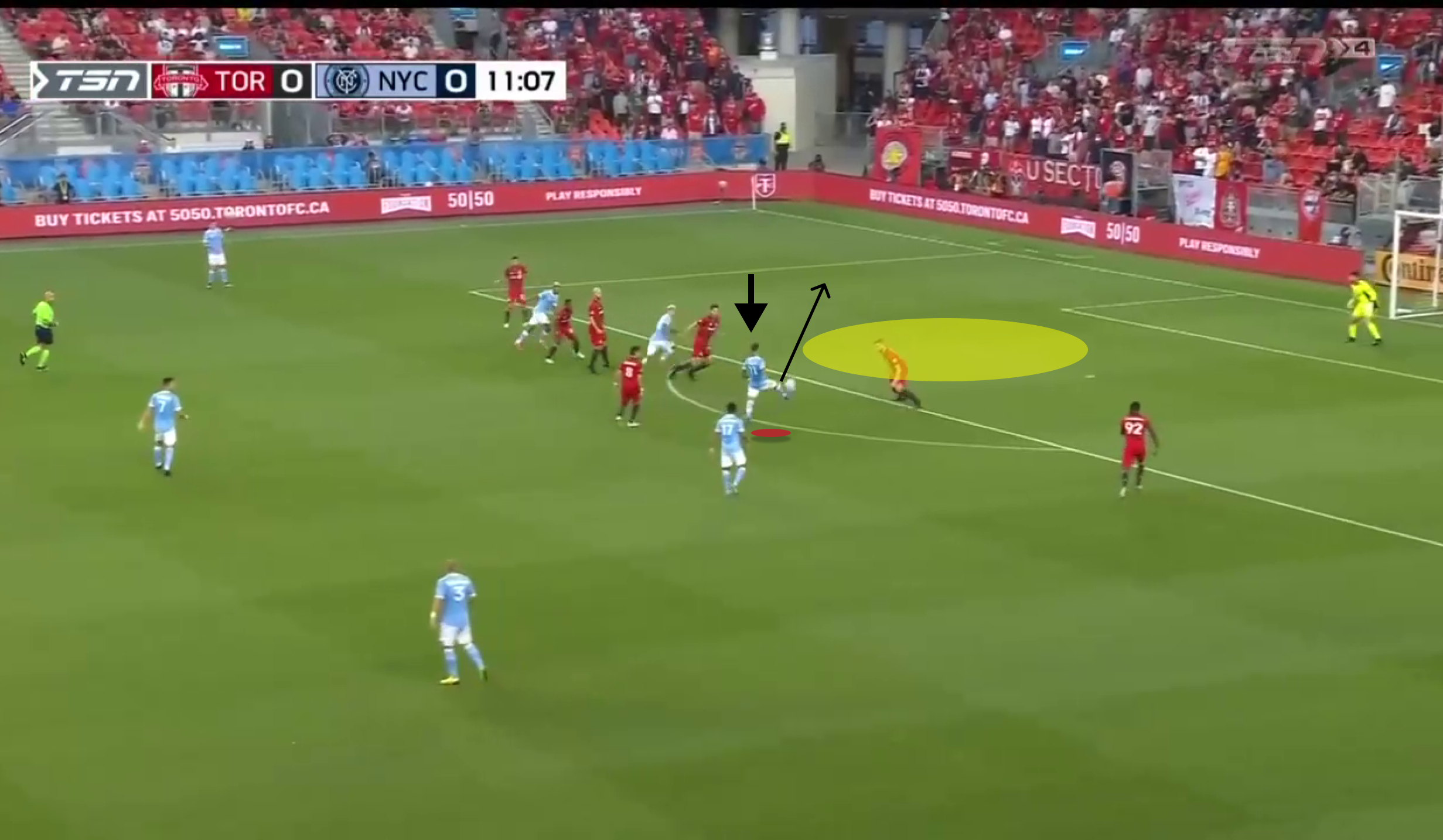 In the match situation in the picture, we can see that he quickly tries to play the ball into the space left open by the defenders as his teammate is sprinting into the space. It was pretty much a wall pass situation, indicating his ability to make quick decisions and how solid his link-up plays are. 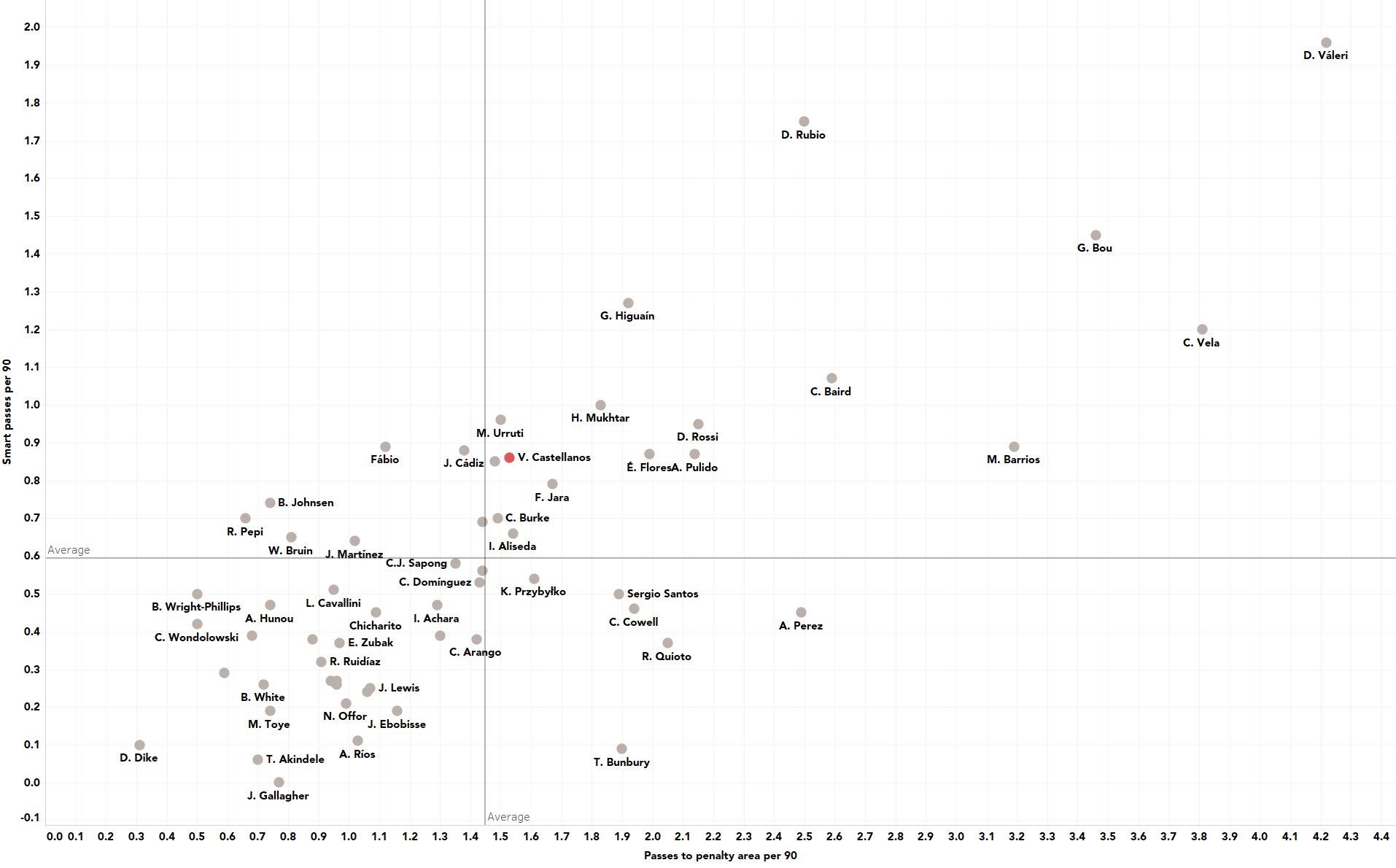 Despite the penalty area being his favourite spot to operate, we should not forget that he often drops very deep to create space for other players. 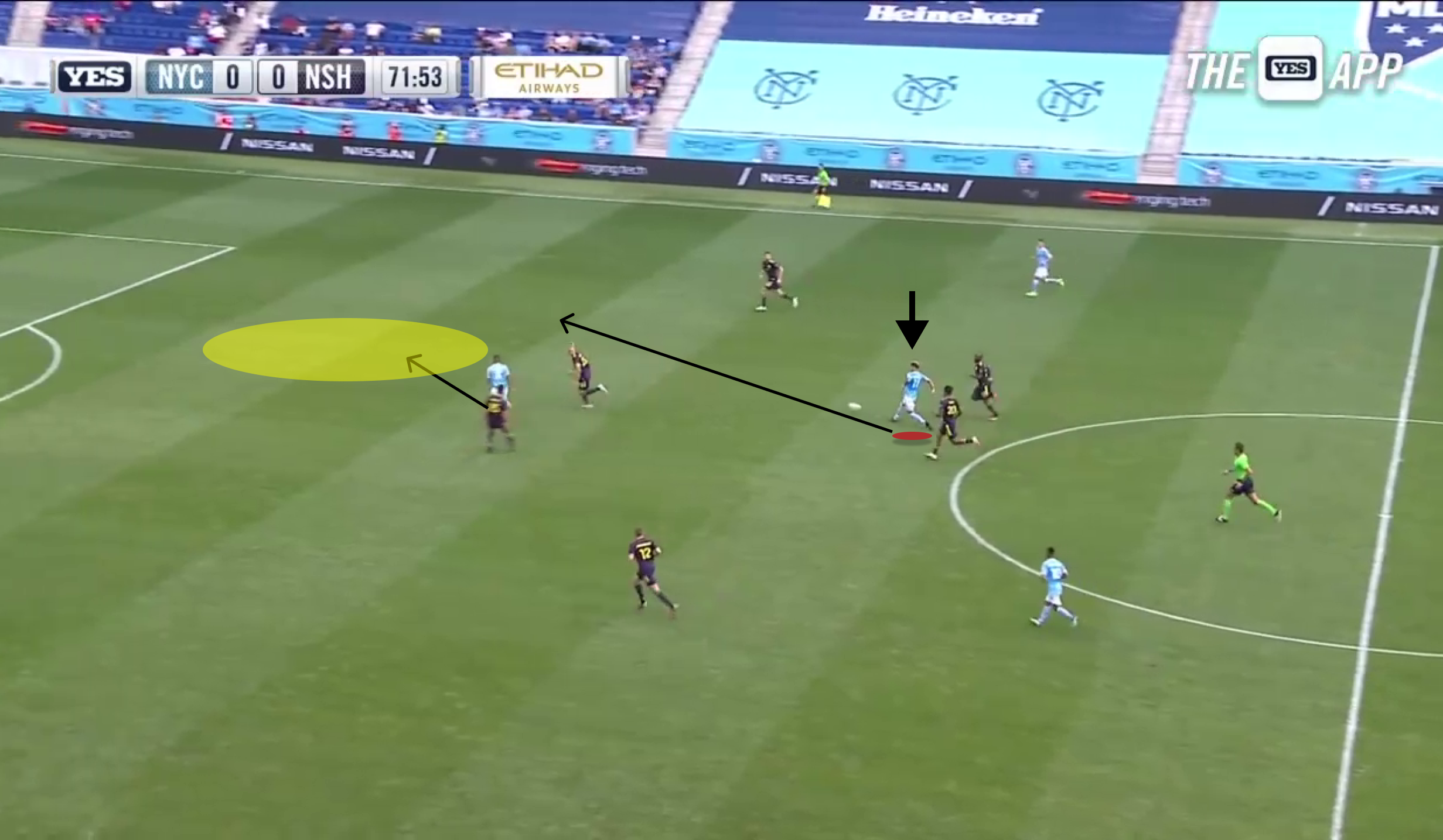 One can see how deep he drops to receive, progress the ball and attract defenders. Now, the players on the wings look to cut inside and exploit the spaces left behind. Castellanos, having an excellent vision, is able to find the right teammate to pass to and plays the ball exactly into the right space for the team to have an advantage over that situation.

His off-the-ball movements in the attacking third are very deceptive. He’s always looking to either create space for himself or the ball possessor.

His off-the-ball movements really put defenders in a dilemma. The diagonal run to cut in front of the centre-back is a top-quality move that any striker should know. 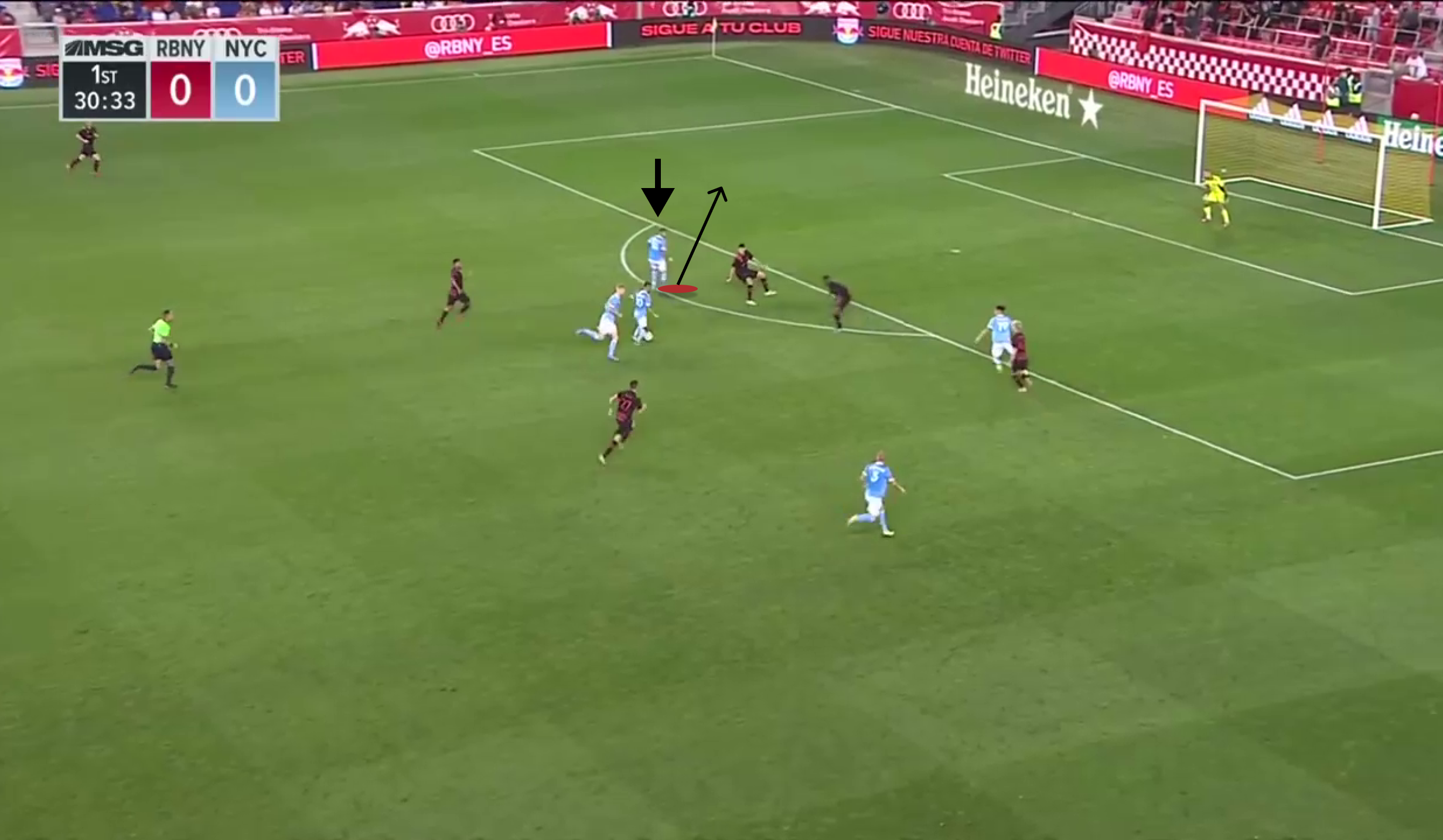 The diagonal runs off-the-ball in front of the centre backs put immense pressure on the defenders. In the match image, we can see a player carrying the ball towards the defender while Castellanos has just made a diagonal run in front of the defender. In such a situation, the defender is confused about whether or not he has to run behind Castellanos to mark him as he’s running into open space but at the same time, him moving away would result in the ball possessor having enough space to carry right through the middle. These kinds of runs are very effective and are frequently made by Castellanos in the attacking third. 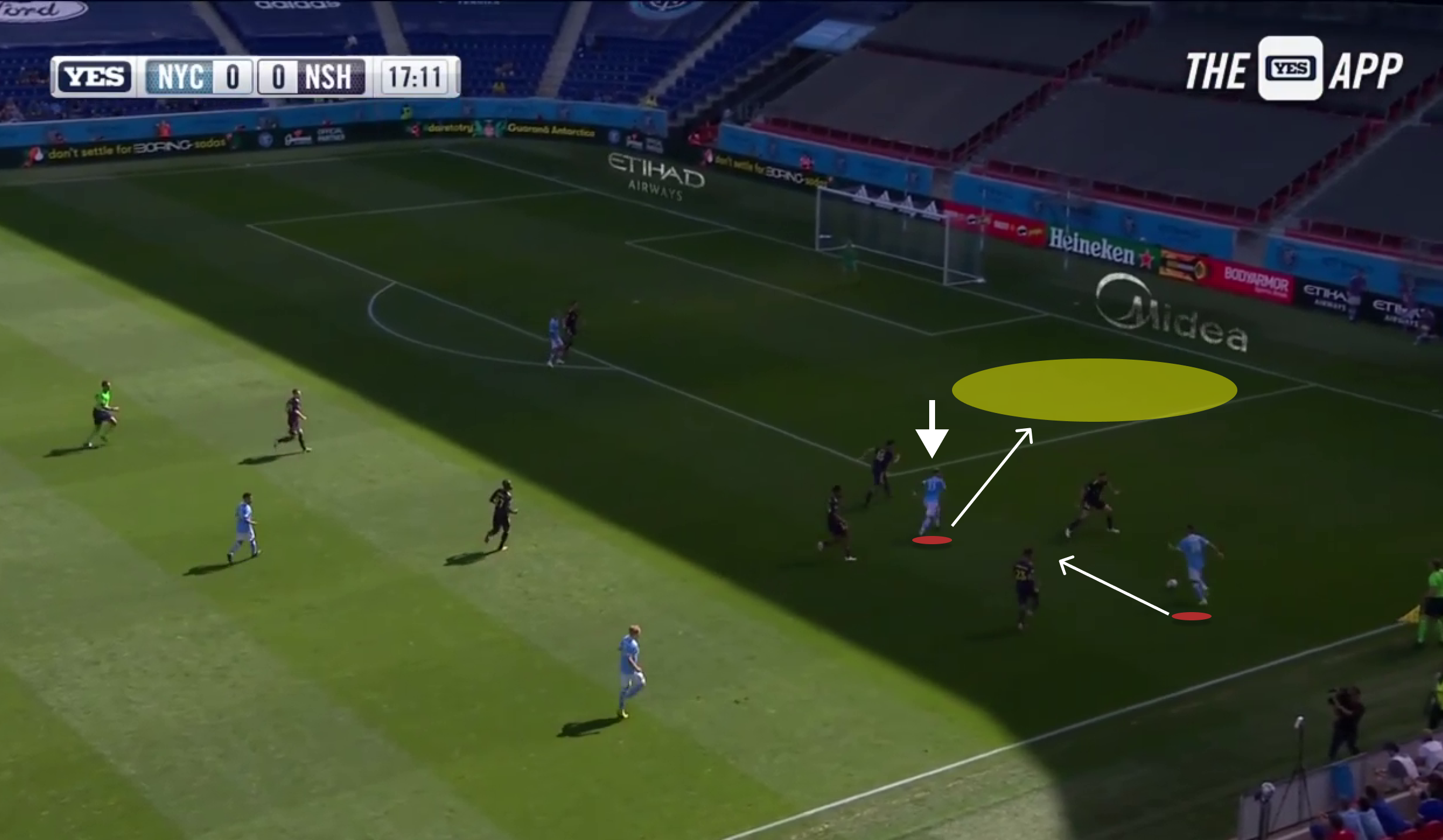 Another example of his off-the-ball movement adding value is when he creates space for his teammates. In the match situation represented in the picture, we can see the ball possessor closed down on the flank. Now, Castellanos makes a run into the box and drags a defender along with him. This now makes him a passing option for the possessor and he also now has space to dribble the ball through the middle, as the space was created by Castellanos’ run.

He still has a lot of qualities that help him to perform to the highest standards. The qualities mentioned above are among his best assets. It’s impressive that the player has nourished all these qualities at such a young age.

It’s only a matter of time before the European giants take note of Castellanos and his move to Europe is inevitable if he continues to perform consistently in the upcoming seasons. His contract comes to an end in three years but we may see him move to Europe before his contract expires. There are chances that he gets to sign to another CFG group clubs such as Manchester City, Mumbai City etc. Castellanos is one of those players who give 100% every time they’re on the pitch. He has a strong mentality and nature to fight on the pitch. With the right attitude and constant learning, his career from hereon will only see exponential growth.