Football is played with 10 outfield players and a goalkeeper, with the ‘keepers being the only players on the pitch allowed to use their hands. Their sole responsibility and main job is to keep the ball out of their net at all costs. In 1992, the back pass rule was introduced to the game, forcing the ‘keepers to improve their footwork.

In our modern game, however, the role of the goalkeeper has developed drastically. Distribution, sweeping and commanding the box, in addition to shot stopping and agile reflexes, have become the stepping-stones for modern goalkeepers.

Coaches now view goalkeepers as the base of the team’s build-up play. The modern goalkeeper is expected to play accurate short passes as well as provide purposeful crosses further up the field. Gone are the days where ‘keepers aimlessly hoof the ball forward as a general tactic. The first phase now begins with the goalkeeper being in possession, signalling the start of the attack.

This was further encouraged with the goal-kick rule change in 2019, as the ball was no longer required to leave the penalty area before a teammate can touch the ball.

The limitations previously set on the most unique position on the pitch have definitely changed.

This tactical analysis will shed light on how modern goalkeeper now plays a fundamental role at the base of the team. The analysis highlights how some managers’ tactics are now based on the profile of ‘keeper at their disposal.

Below are the six primary fundamentals a goalkeeper should excel at to be considered a top modern goalkeeper.

At the end of the day, as much as goalkeeping has progressed, it’s still all about keeping the ball out of the net.

A ‘keeper must have a reliable pair of hands to deal with shots and crosses. A ‘keeper has to choose when to catch the ball and when to parry it — parrying it into the right areas, at that, away from danger.

Reflexes is a developed skill that can be trained and enhanced through practice. It is all about those split-second reactions and decision-making.

The goalkeeper is the commander of the box. Dealing with aerial balls is one of the most difficult parts of goalkeeping. It’s a combination of timing, technique and mindset.

Arguably one of the most important aspects for progressive coaches who build up from the back. Becoming more important year on year.

Goalkeepers are now more positive with their starting positions. This change has led to goalkeepers becoming better overall athletes.

The more traditional goalkeeper. He mainly excels at shot-stopping, eliminating threats from crosses and quickly recovers after blocking a shot. His main objective is keeping a clean sheet, as with every goalkeeper. His weaknesses can be footwork, covering the defensive line and reading the game. Coaches instruct line ‘keepers to reduce their on-ball time to a minimum.

Oblak is the perfect ‘keeper for Diego Simeone’s Atlético Madrid style of play. He is a no-nonsense ‘keeper who is the best at keeping the ball out of his net.

De Gea has been the subject of some scrutiny in recent times, not least after his performance in Manchester United’s 4-0 hammering at Brentford. The Spaniard, famous for his tremendous shot-stopping and sharp reflexes, let a straightforward shot creep underneath him before misinterpreting the situation and playing a pass into an under-pressure Christian Eriksen inside the box. He has also struggled to command his box with crosses from set-pieces. Questions are being raised as to whether he can fit into Erik ten Hag’s system.

This type of ‘keeper has an excellent reading of the game and is confident with the ball at his feet. He possesses a wide passing range and the ability to communicate effectively with his defenders and teammates. In the build-up, he can be used to outnumber the opposing offensive line when his defence is put under pressure.

Ball-playing ‘keepers normally start moves off by passing out to a centre-back or to a dropping pivot player. They can also send short crosses to fullback or wide midfielder. The ‘keeper must adjust his position and always be ready to receive a back pass and keep the game flowing.

This style of football is common in more developed teams with high-quality players. Teams with a more pragmatic approach prefer to deploy a line/shot-stopping goalkeeper.

“You can never take away a person’s vision, and goalkeeping at a high level is largely a question of vision. If everybody moves forward, you need an extra defender, so the goalkeeper has to be able to play as well.” – Johan Cruyff.

During the build-up phase, the Barcelona ‘keeper becomes an extra outfield player. He has no problem playing first-time passes and risky one-twos to break down the first line of pressure. 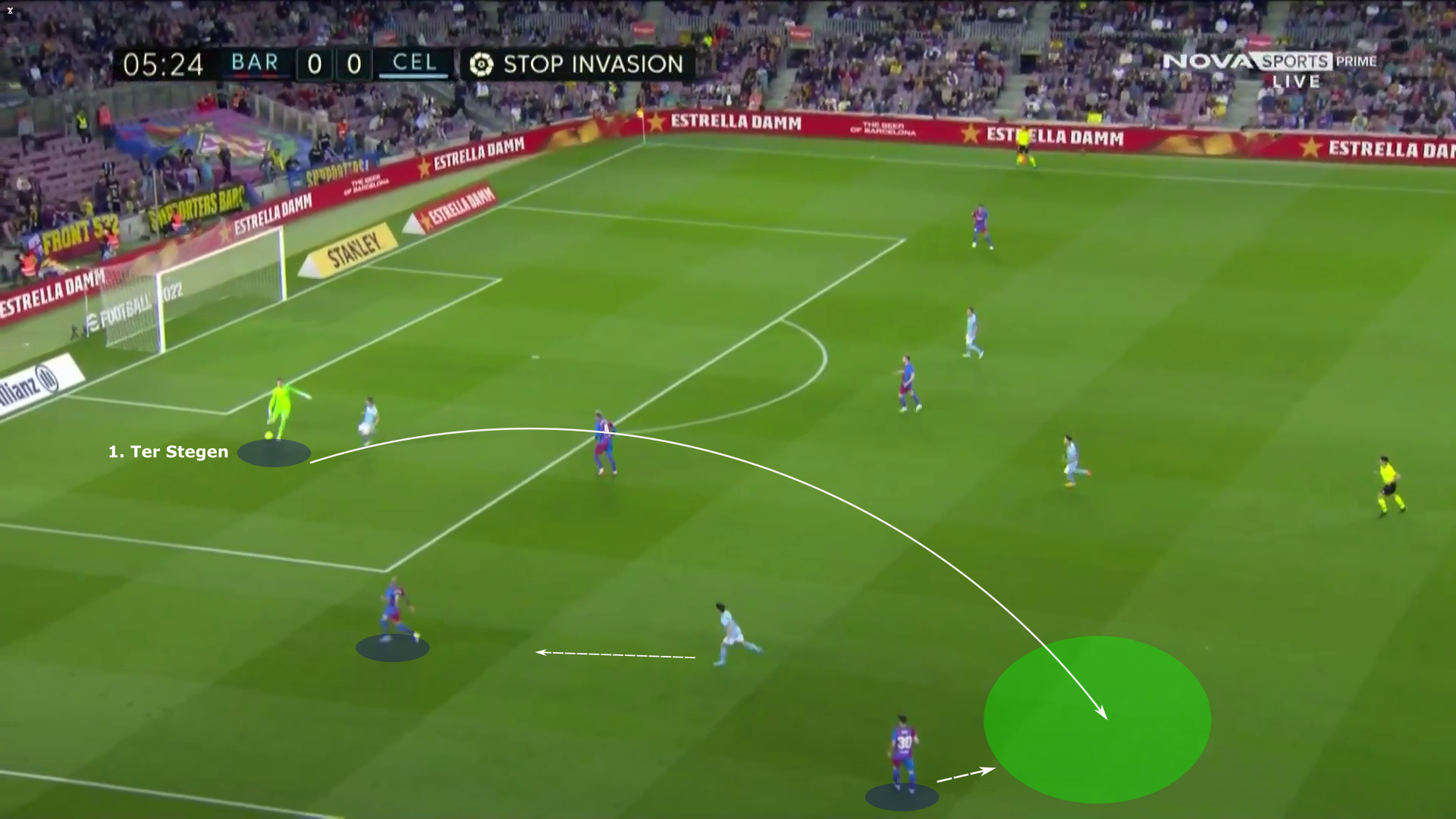 When Pep Guardiola took charge of Manchester City in 2016, one of the first decisions he made was to replace Joe Hart with Claudio Bravo between the sticks. Pep wanted his goalkeeper to be the 11th player on the pitch and take part in the game.

The above stats from the 2015/16 season showcase the different profiles of the two ‘keepers in terms of ball-playing and footballing ability. Pep then went on to replace Bravo with Ederson from Benfica, who has since become one of the best ball-playing and all-around goalkeepers in world football.

Ederson will always look to find the free man to start off his team’s moves. He is very calm when under pressure, often performing turns or feints on the ball right in front of his own goal. 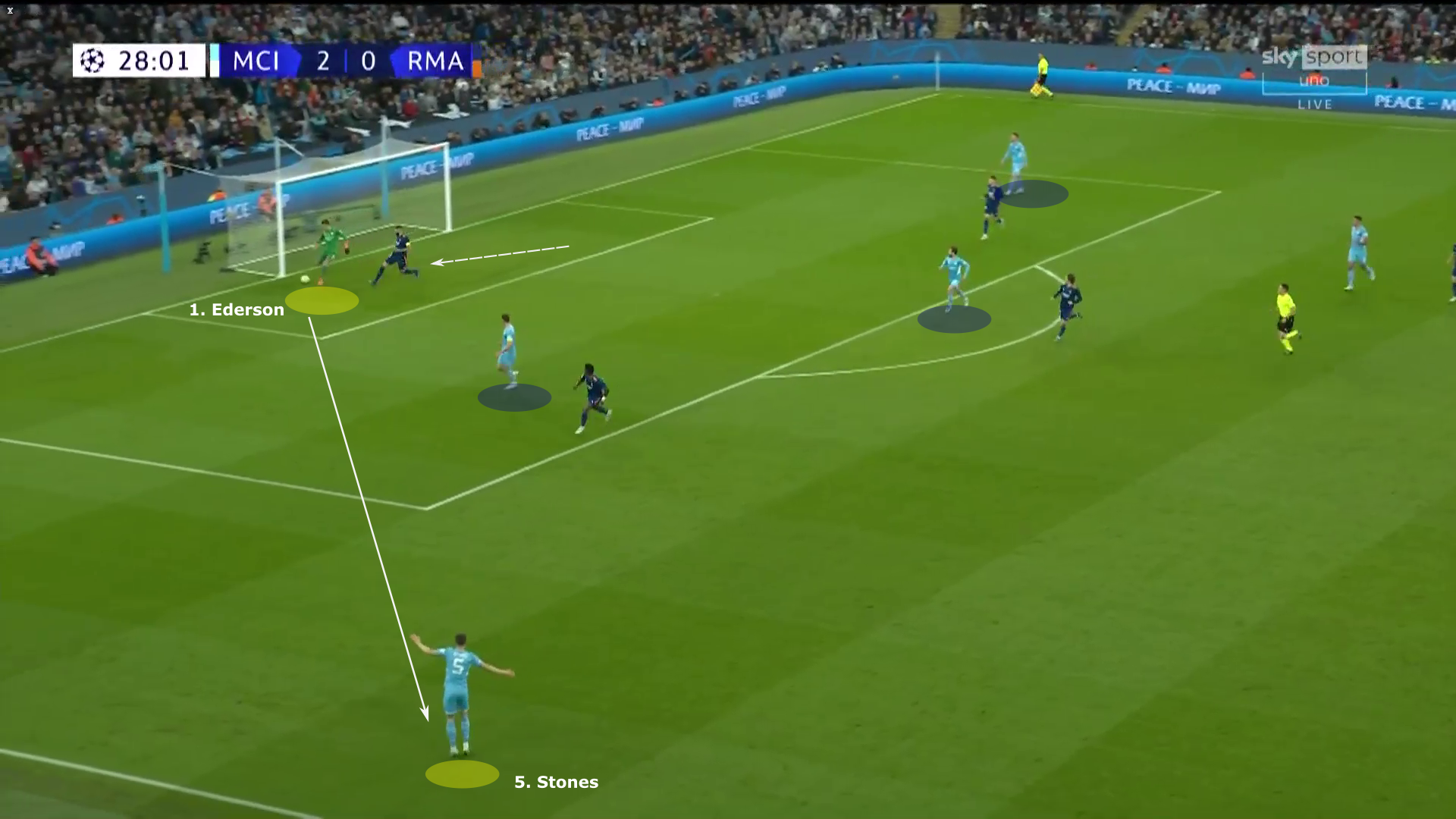 The Man City ‘keeper’s wand of a left foot allows him to make 70-yard passes with the precision of a 10-yard pass. He has incredible long-range passing, with which he has even been known to create chances for a striker with one direct ball in behind the opposition. The below sequence ended up in a City goal during the 2021 UEFA Champions League semi-final clash with PSG. 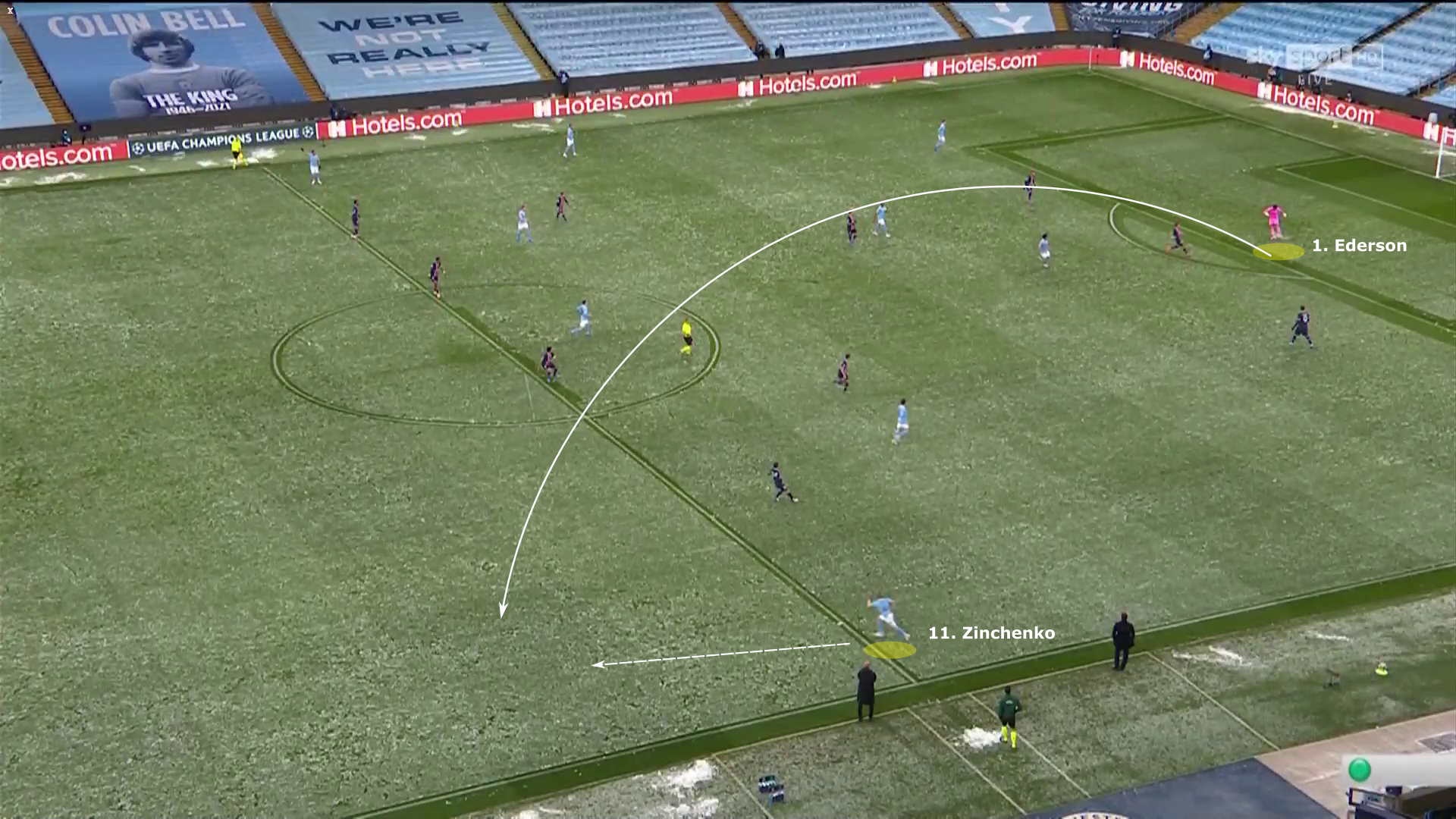 On the other side of the city, De Gea completed a total of 501 passes with an 86.4% pass accuracy. An average of 12.18 passes per 90. His most productive passing output came in the season opener, a 5-1 victory over Leeds United at Old Trafford.

This highlights the stark contrast in profile of the red and blue halves of Manchester’s No. 1s.

The term “sweeper” was applied to a deep-lying defender that played behind the other defenders and in front of the goalkeeper. It was perceived by many to be a cautious way of playing the game. More adventurous coaches have encouraged the ‘keeper to be proactive and take on the sweeper role behind the back line.

The sweeper-keeper takes an advanced position higher up the pitch in the defensive phase. He leaves his line to intercept through balls and excels in one-on-one situations.

The modern goalkeeper defends on the front foot, ready to run out and clear any balls played over the top of the defence. They need to be adept at clearing the ball with both feet and their head. Sometimes, miscommunication with teammates or misreading of the situations leads these ‘keepers to get stranded in no-man’s-land, with an empty goal for the opposition to try to score in.

The sweeper-keeper must be explosive, agile and quick to accelerate off his line.

Alisson’s 1v1 heroics is one of the reasons Jürgen Klopp’s Liverpool adopt such a high defensive line. During the 2021/22 PL season, the Brazilian faced the most 1v1s in the league but had a +7.8 expected saves in 1v1 situations. To compare, Chelsea’s Édouard Mendy had a negative return of -0.79.

Courtois contributes more in defensive situations than in the build-up phase, acting as a sweeper when his team is pushing forward in need of a goal. 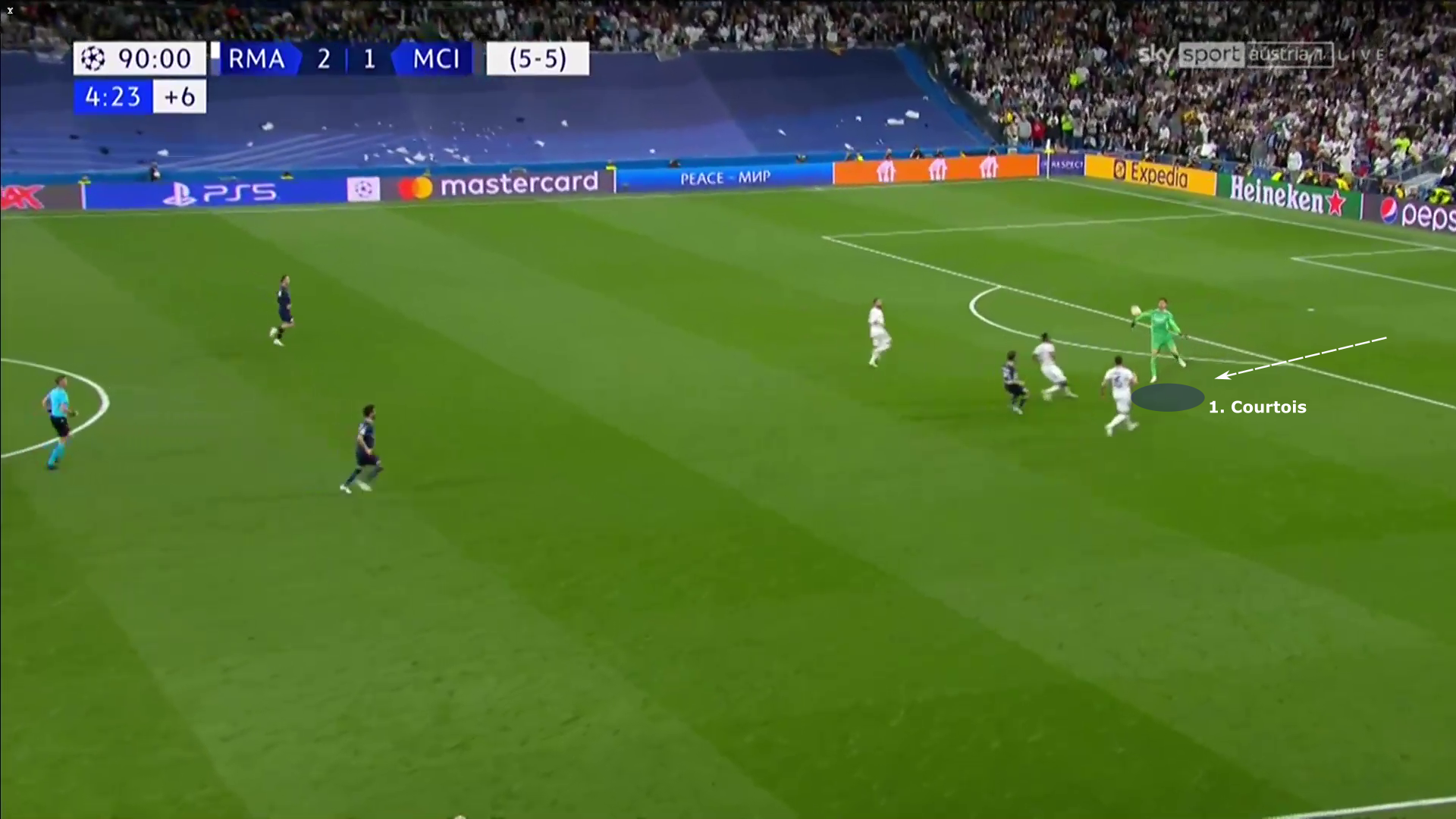 It is Neuer, however, who has become the poster boy for modern sweeper-keepers. The German captain’s ability to come off his line and sniff the danger is second to none. Due to Bayern’s dominant style of play, Neuer can sometimes be spotted camped high up the pitch, near the halfway line. He is also very good with his feet as well as his hands. Neuer uses the throw more than most ‘keepers. His rocket of an arm allows him to set counterattacks up quickly.

Guardiola’s arrival at Bayern Munich in 2013 made Neuer even more aggressive in his sweeper-keeper duties, by moving the defensive line from an average of 36m to 43.5m away from their own goal. 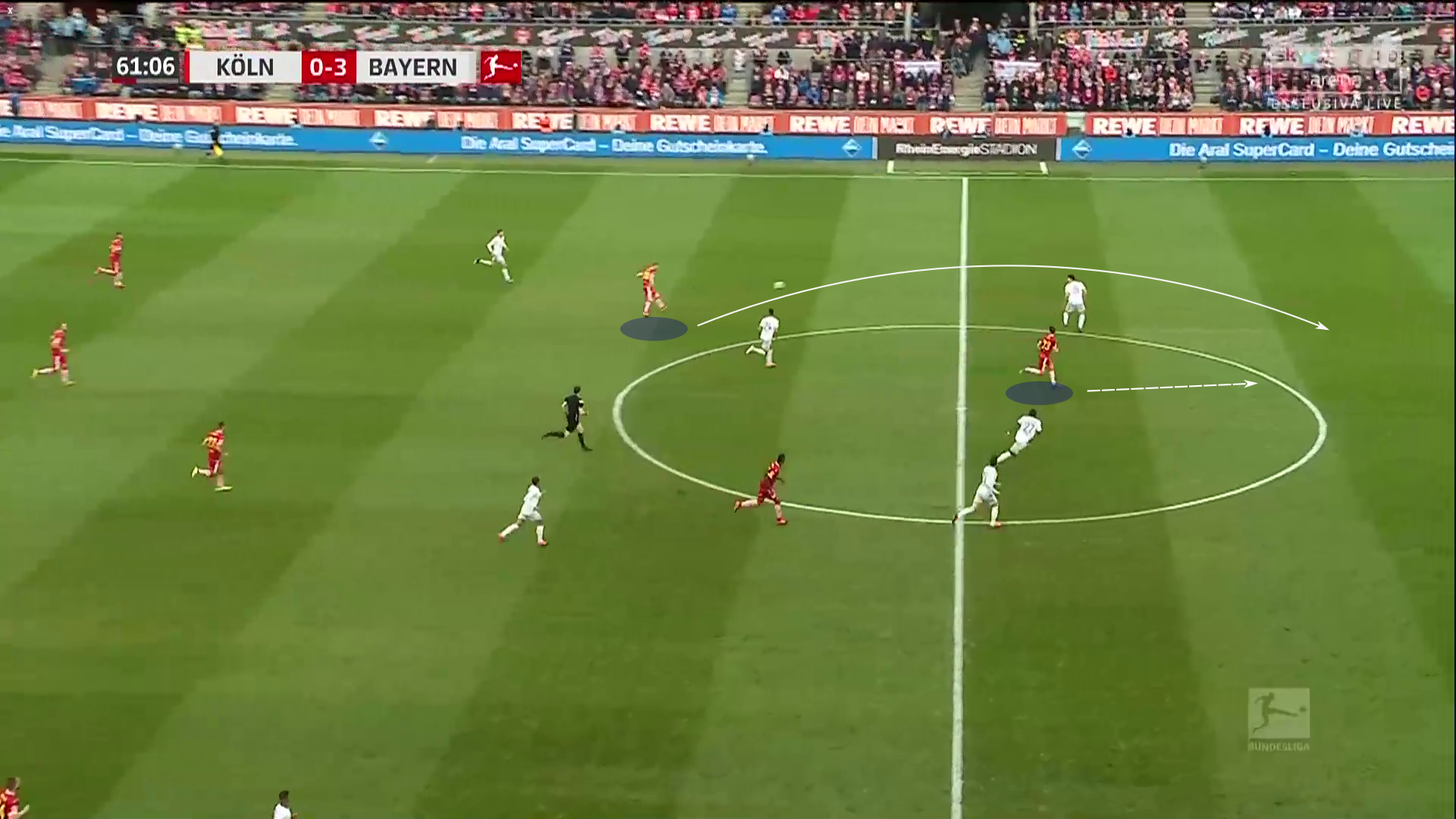 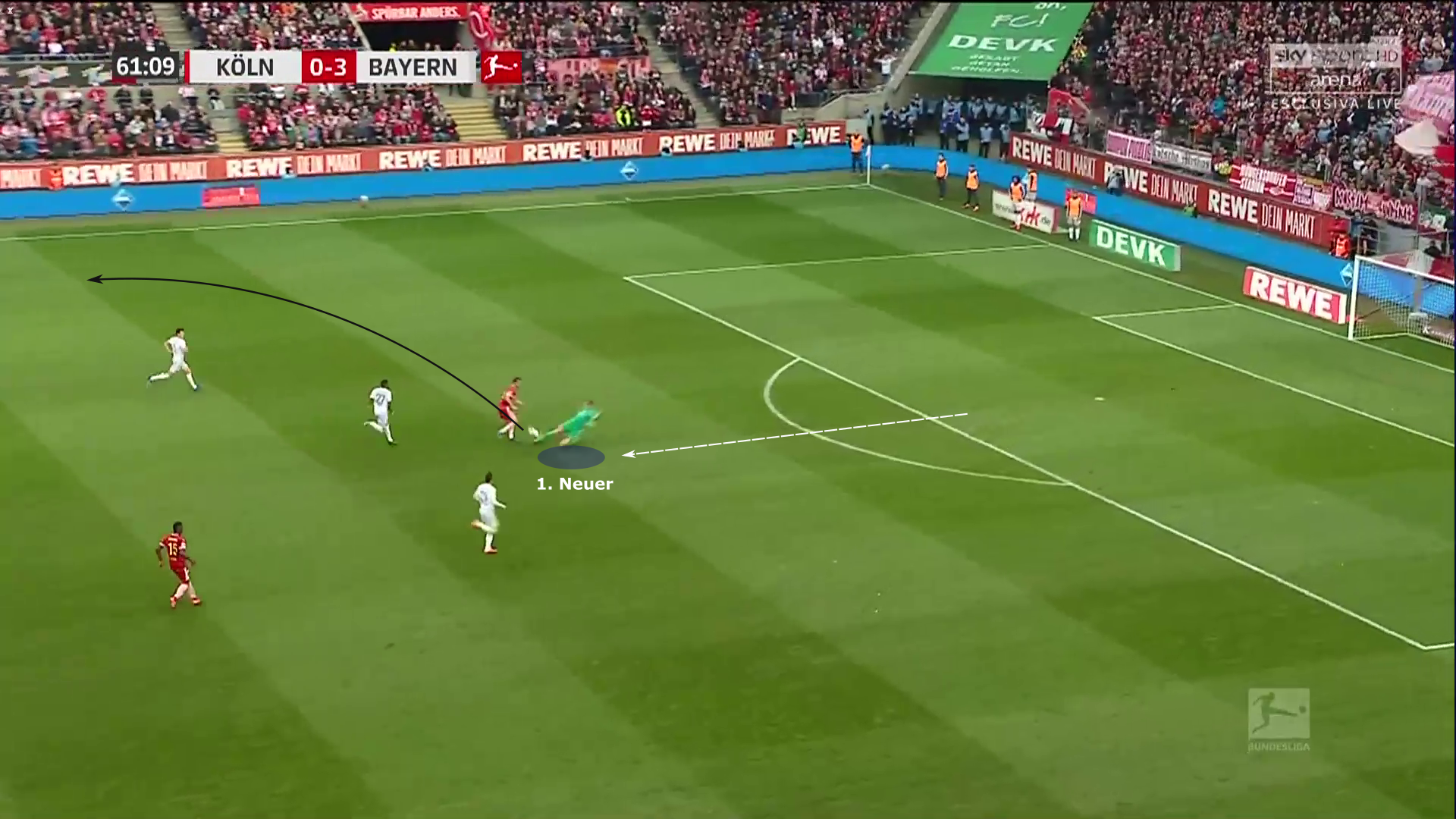 Below are the heat maps of Neuer, Alisson, De Gea and Oblak throughout their careers. Notice the difference in positioning between the sweeper-keepers and line-keepers. Neuer and Alisson are much more adventurous and proactive to get off their lines and cover the space behind their defenders. 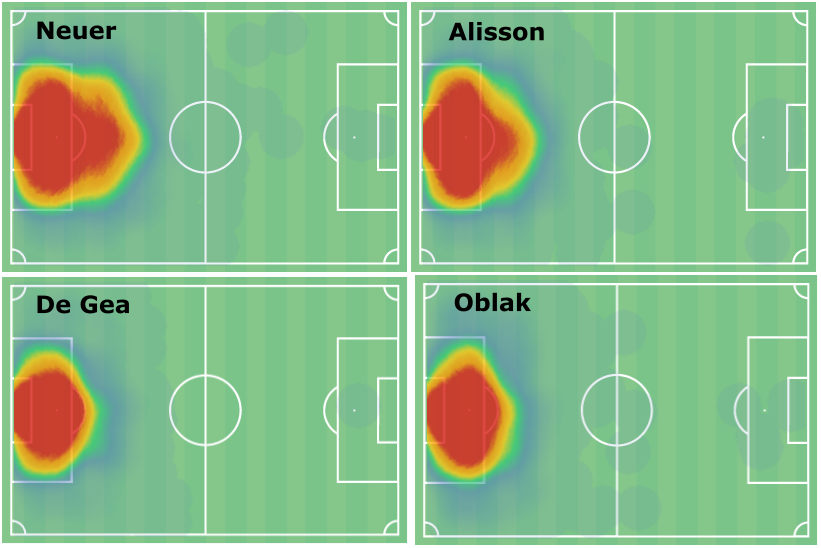 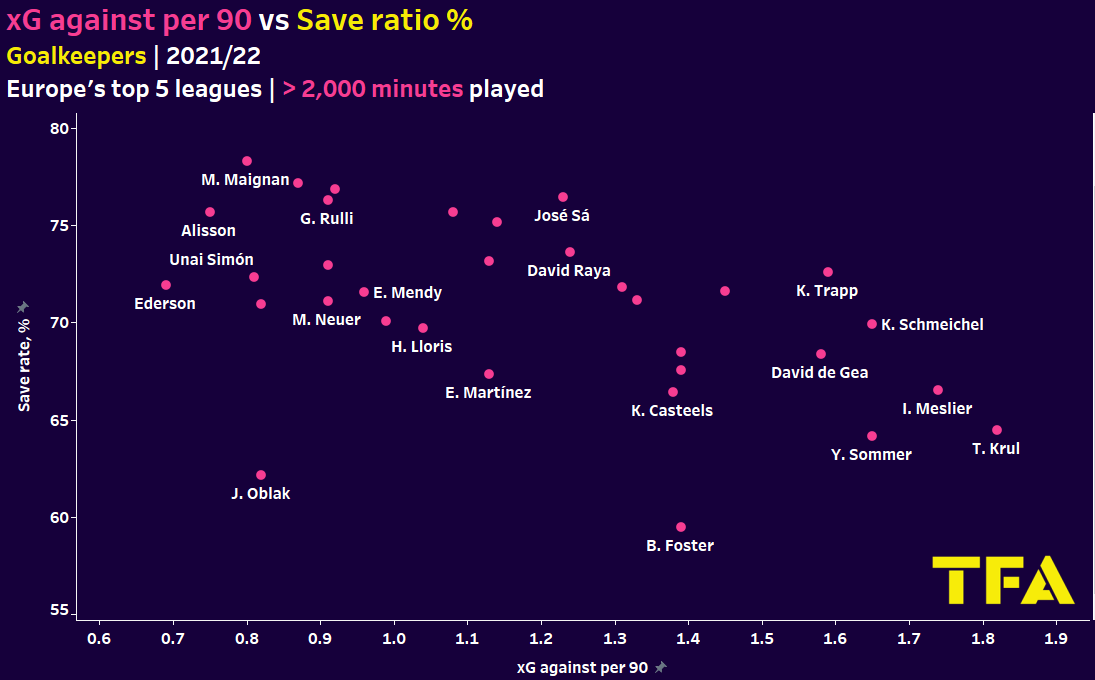 The save ratio is a useful but incomplete tool to evaluate the performance of goalkeepers. A team might concede high-quality chances to their opponents, making it hard for goalkeepers to save the resulting shots (the goalkeeper would display a low save ratio). On the contrary, a well-organised defence, which creates density in the box, could leave their opponents mostly low-quality chances, such as shots from outside the penalty area (the goalkeeper would show a high save ratio).

Expected goals help us solve this problem, adding the quality of the conceded chances to the equation.

As we can see, the likes of Ederson and Alisson have a high save ratio but do not concede too many shots since they play behind title-winning defences that do not concede many chances.

De Gea, Kasper Schmeichel, and Kevin Trapp concede a much higher number in terms of xG against per 90 and still offer a respectable save % ratio. 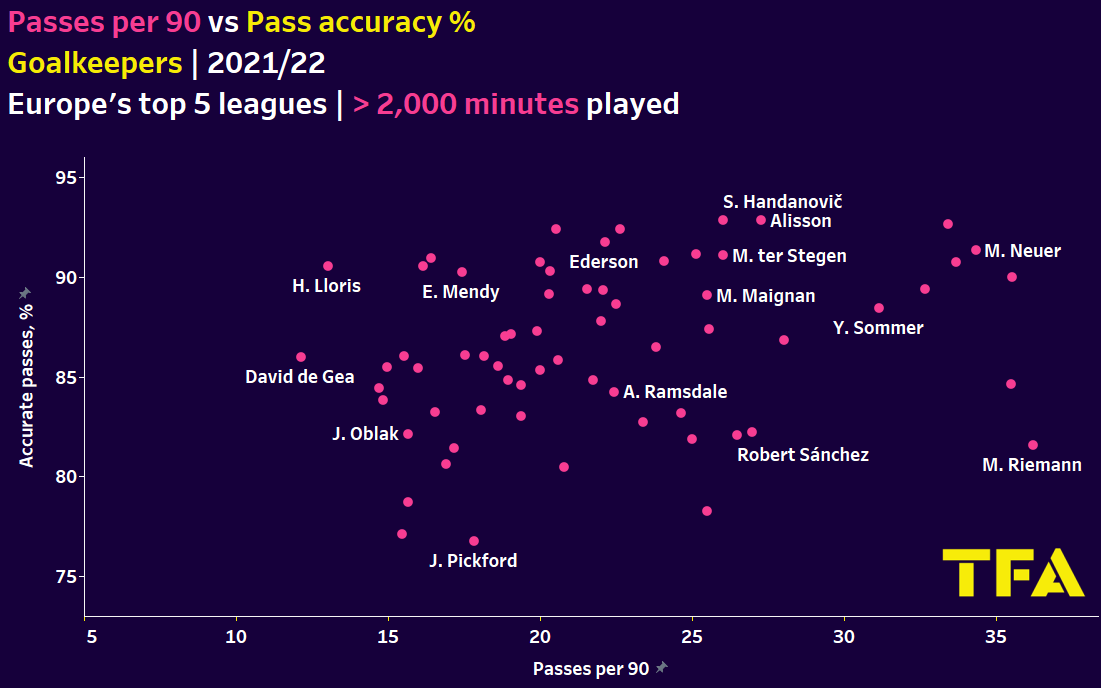 Apart from the usual suspects, the chart highlights Inter Milan’s Samir Handanović, Borussia Mönchengladbach’s Yann Sommer and AC Milan’s Mike Maignan as ‘keepers with over 25 passes attempted per 90 with an accuracy rate of 87%+.

The impact of goalkeepers on the style of play a team adopts and the execution of a game plan in and out of possession is rising year on year. Managers are now handpicking their men between the sticks to fall in line with their football philosophy and identity.

From being the outsiders of a squad, the players who wear a different colour and who enjoy the luxury of handling the ball, goalkeepers have become integral to their team’s success. Look no further to the way in which the change from Loris Karius to Alisson Becker made strides in turning around Liverpool’s fortunes and helped them win the major honours. 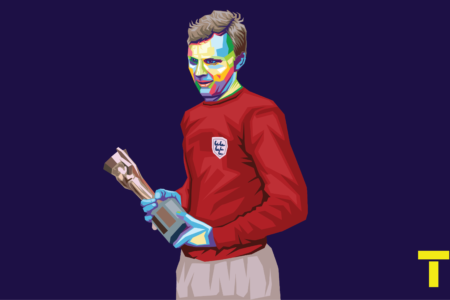 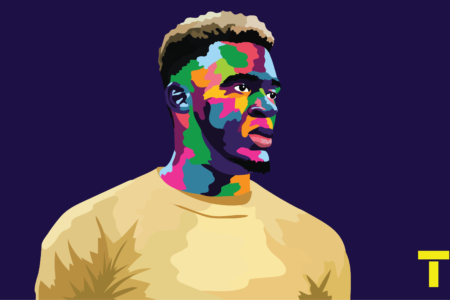 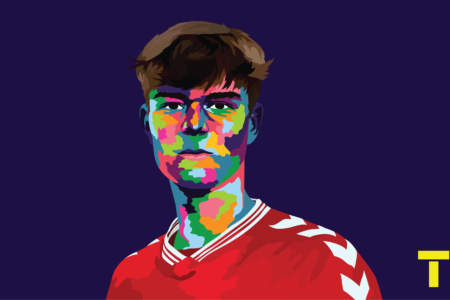 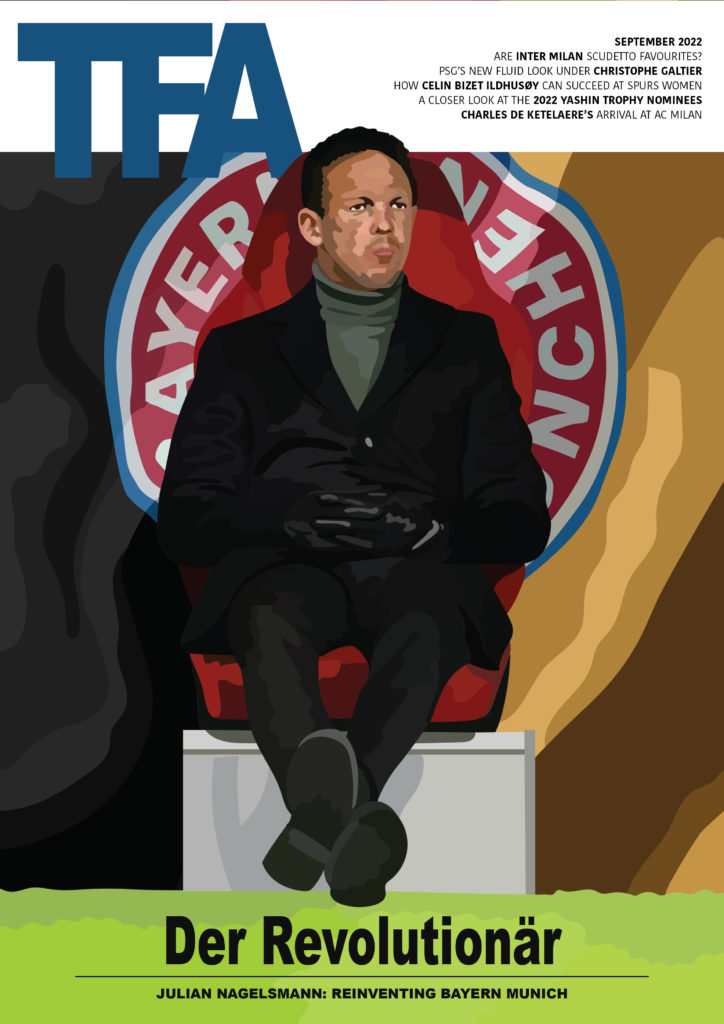