Premier League 2022/23: How Newcastle went toe-to-toe with the champions in a six-goal thriller – tactical analysis

Matchday three of the 2022/23 Premier League season saw Newcastle United host Man City at St. James’ Park. The teams went into the match in impressive form, with both sets of defences yet to concede a goal this campaign.

The progress made by the Magpies since Eddie Howe’s arrival has been tremendous, with Sunday’s display against the champions arguably the most impressive to date. Unlike teams who sit back and wait for City to break them down, Newcastle had a go. From the off, they demonstrated extreme levels of hunger and desire which got the fans off their seats. The atmosphere was electric.

They exposed City’s weaknesses and made them uncomfortable, especially during the final 30 minutes of the first half. The irrepressible Allan Saint-Maximin, who was unplayable throughout the evening, created goals for Miguel Almiron and Callum Wilson before Kieran Trippier dispatched a sublime freekick to make it 3-1. The English right-back has now scored three of his four attempted freekicks for Newcastle since joining last January.

Guardiola’s team ignited a second-half fightback to play out a rollercoaster 3-3 draw. “A proper game,” Pep Guardiola called it afterwards.

For the first time in his career, Eddie Howe has avoided defeat against a team managed by Guardiola, on the 11th time of asking.

This tactical analysis will look at the tactics deployed by Eddie Howe during Sunday’s clash. The analysis highlights how Newcastle managed to fight back after going 1-0 down to claim a deserved point. 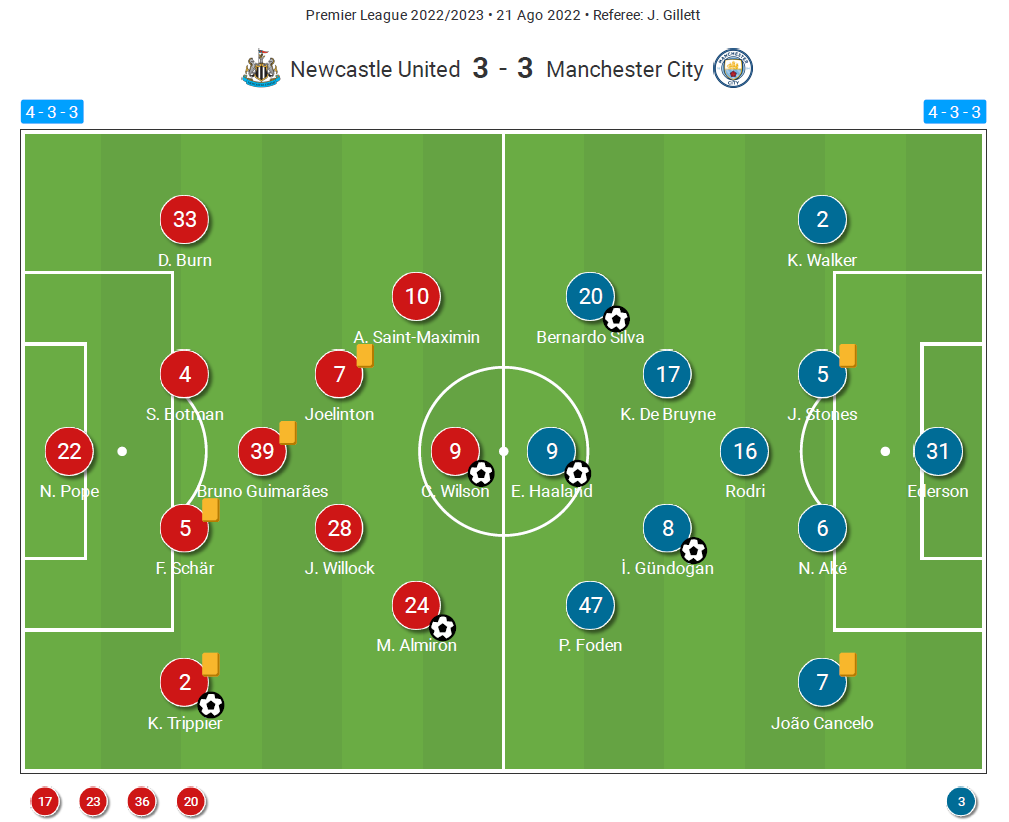 Eddie Howe started with the same side that drew with Brighton last weekend in a 4-3-3 formation. Sven Botman partnered Fabian Schär at centre-back while Dan Burn kept his place at left-back. Allan Saint-Maximin and Miguel Almiron provided the width and had big roles to play during the game.

As for the visitors, John Stones came in for Ruben Dias while Bernardo Silva made his first start of the league season, replacing Riyad Mahrez on the right. Nathan Ake was soon replaced by Dias after picking up an injury, which would prove to be City’s only substitution. Erling Haaland led the line in his third league start.

For City, it was their biggest test of the season yet. They cruised past West Ham and Bournemouth as both teams had no solution to Pep’s 2-3-5 shape.

From the get-go, Newcastle aimed to press City high up the pitch and disrupt the flow of the game. Out of possession, the 4-3-3 would become a 4-5-1. Saint-Maximin and Almiron would tuck deeper and narrower alongside Joelinton and Willock to create midfield superiority around City’s midfield three of Rodri, Cancelo and Walker. Newcastle’s five would double up on the two free men and press the ball holder.

City struggled to get out of their build-up phase, forcing Rodri to drop in between the centre-backs to receive. The Toon’s midfield five managed to cut out several passing angles for City. 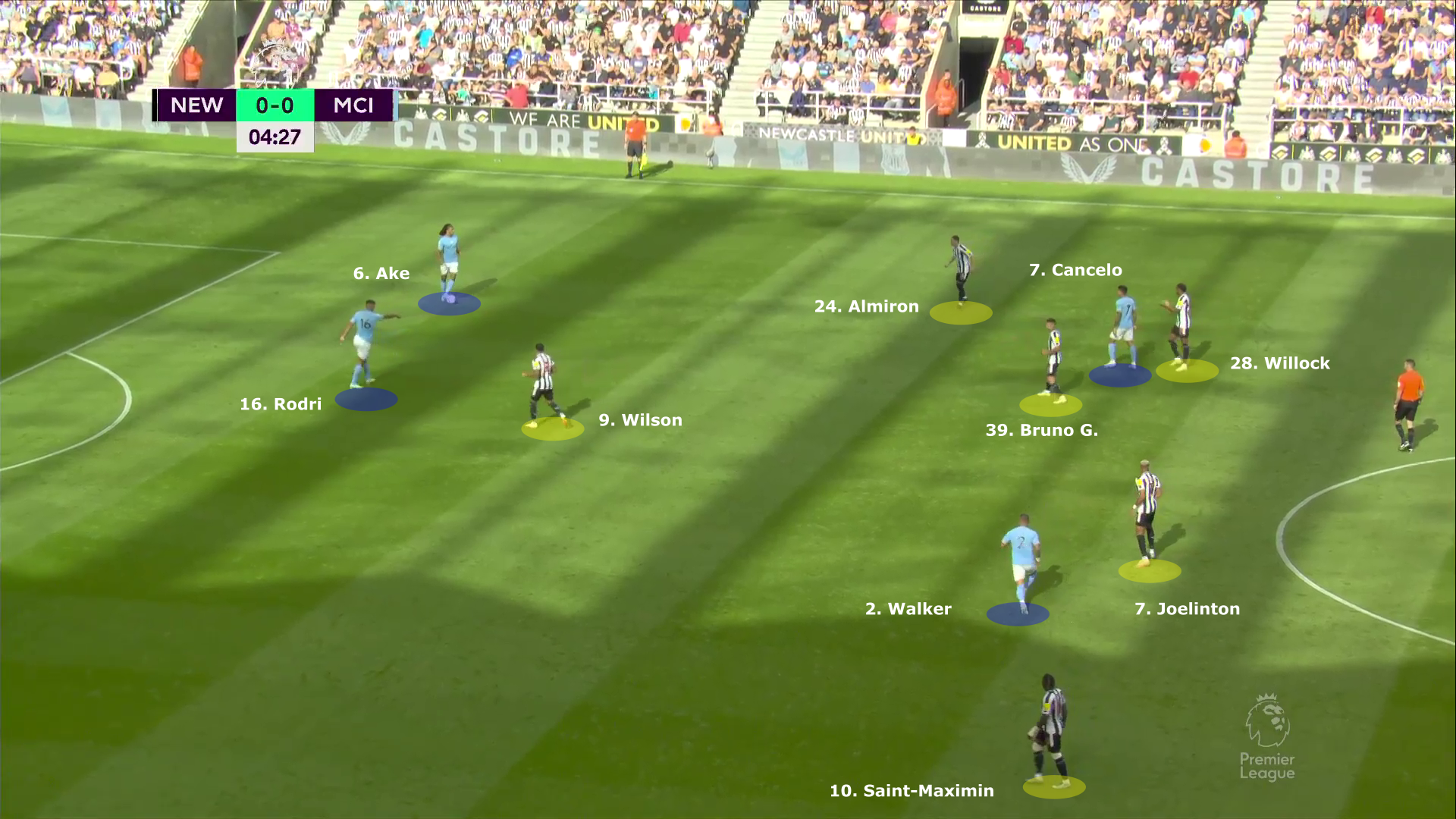 With Newcastle’s overload, City needed to drop their wide attackers, Foden and Bernardo, into deep areas outside of Saint-Maximin and Almiron.

In the first 15 minutes, City often found De Bruyne and Gündoğan in pockets behind Newcastle’s midfield to beat the press. When they managed to escape Newcastle’s web, City were dangerous. In the fifth minute, Gündoğan was able to lift his head up and find a wide-open Bernardo on the right side. Notice how Burn is positioned behind De Bruyne. He was vacating the left-back spot throughout the game to cover the Belgian wizard between the lines. 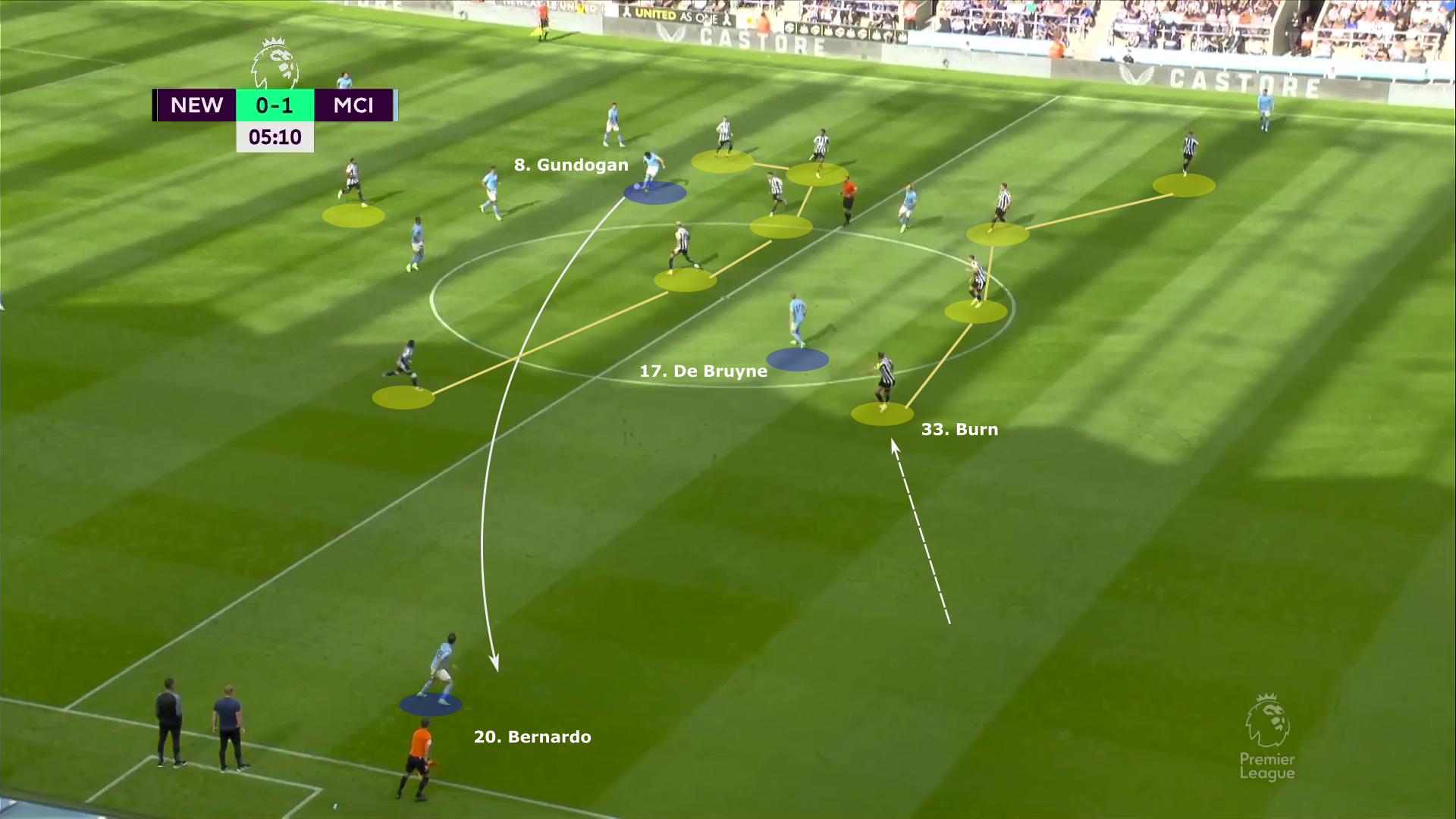 This resulted in the opening goal. Bernardo twisted and turned while Gündoğan made his way into the box to get on the end of the Portuguese’s cross. Teams appear to be targeting the space between Schär and Trippier when crossing from the right-hand side.

After the 15-minute mark, though, Newcastle made it tougher to find De Bruyne and Gündoğan, but also made City rush in their build-up. They overloaded City’s 2-3 set-up and were able to create chaos in the midfield for the next 35 minutes.

The press stopped Pep’s side from playing their lateral and backwards passes to control the game. Howe challenged City to be more vertical and fall into his trap. 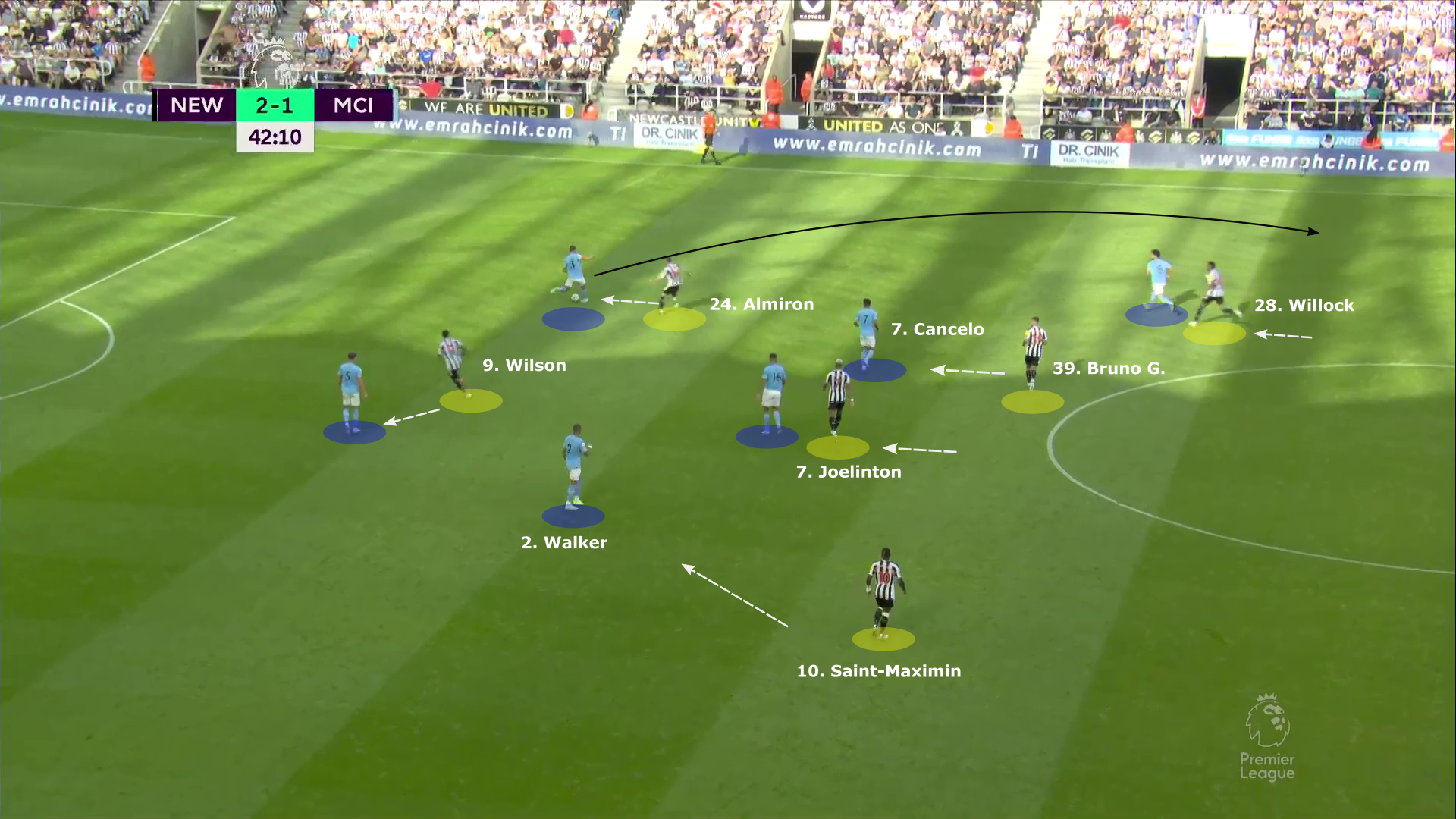 The six City players above are tightly covered as Dias was forced to play the ball out to Foden. 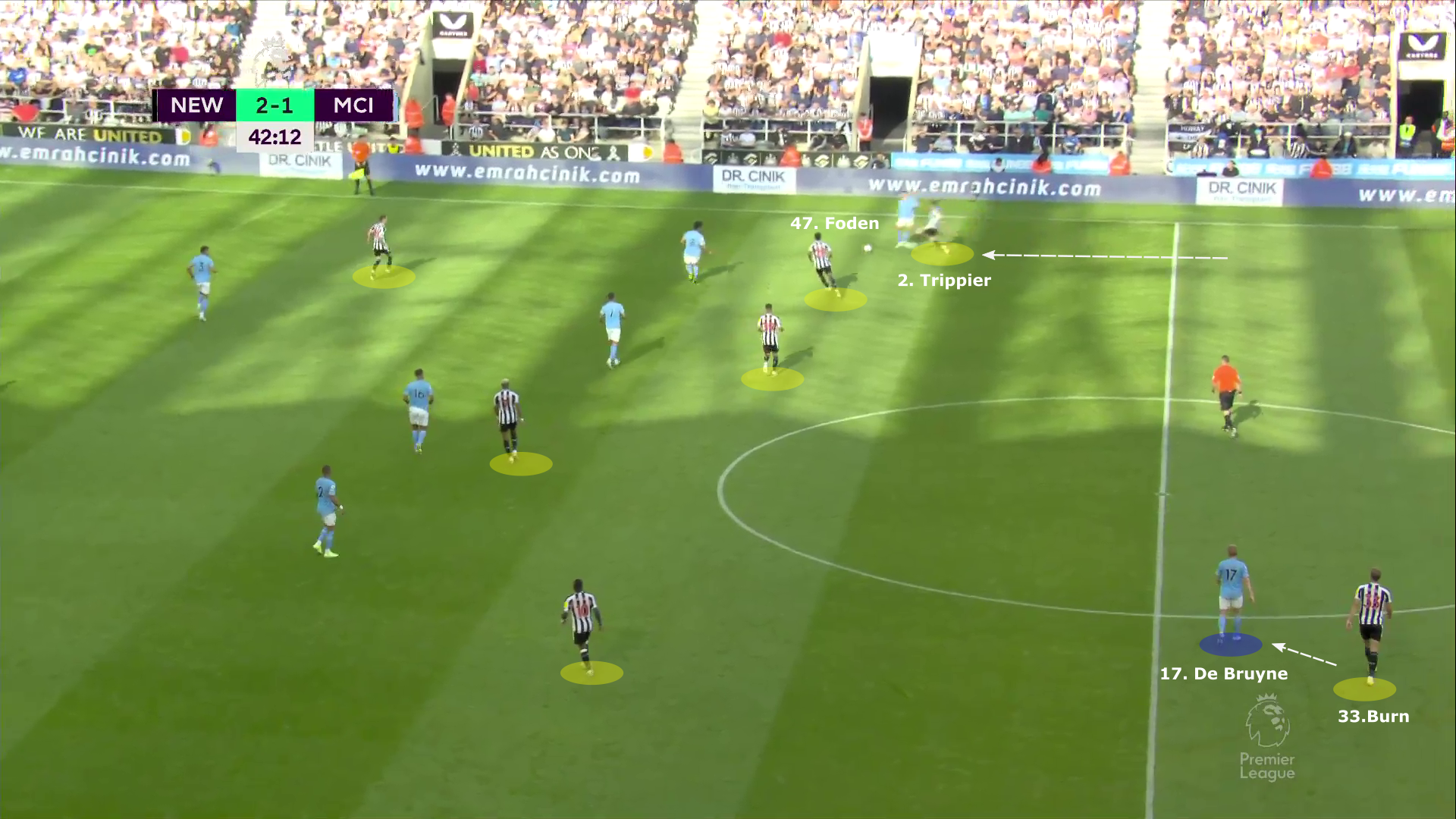 Trippier jumps out with Foden and intercepts the ball. Newcastle made 53 interceptions during the game, City had 30. (See how Burn is marking De Bruyne again.)

Even when in possession, Howe’s adventurous approach meant Burn joined the midfield as a passing option, leaving Newcastle with only three at the back against a potential City break. 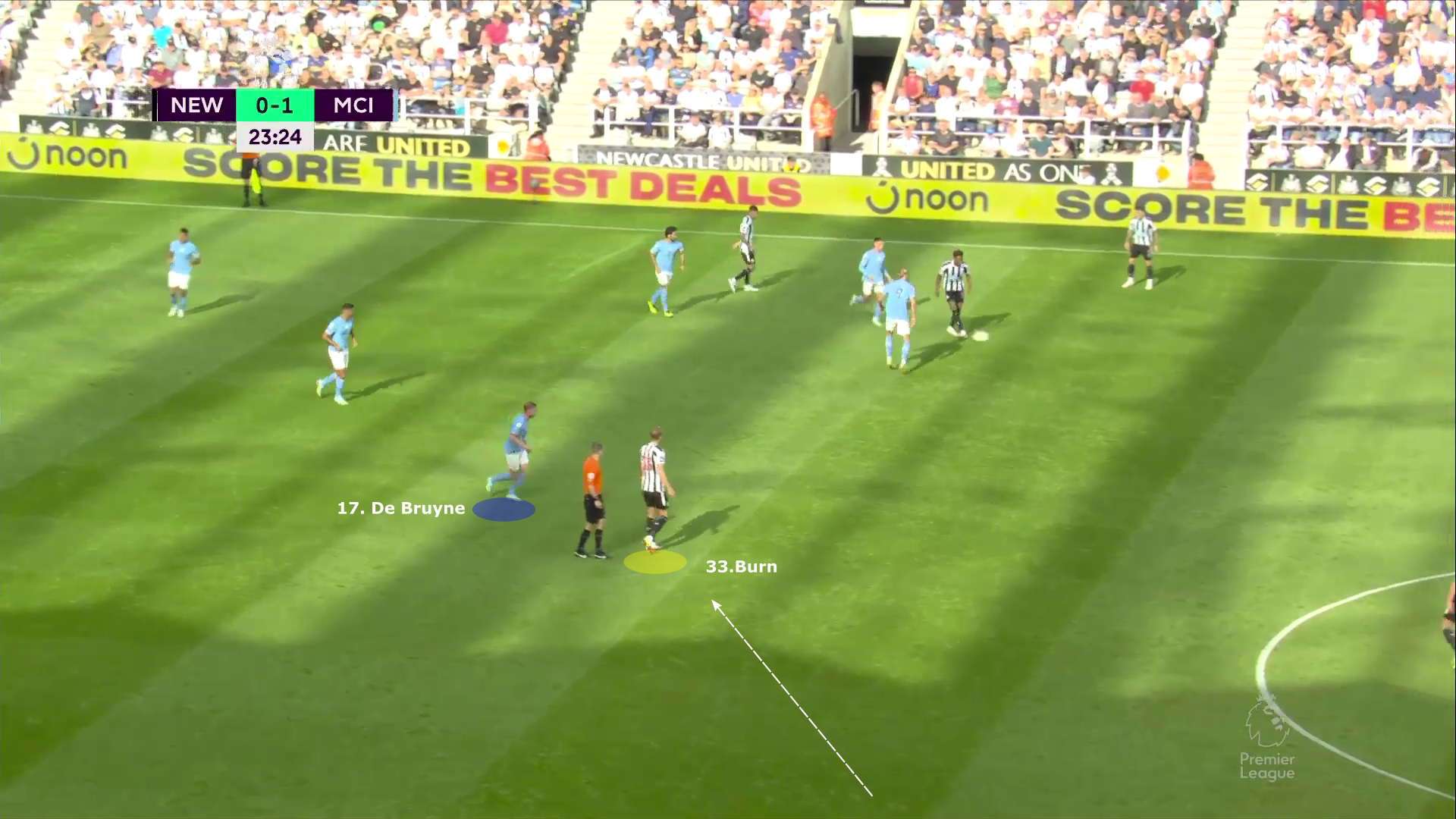 When they settled down after the first 15 minutes, it became one-way traffic in Newcastle’s favour.

The target behind their defensive set-up was to hit City on the break when they win back the ball. They were direct and targeted the spaces left by Walker and Cancelo on the flanks to break.

Walker had a torrid evening as Saint-Maximin’s dribbling and movement caused him all sorts of problems. On the opposite side, Trippier’s overlaps and link-ups with Almiron were also dangerous. Wilson played well with his back to goal. Bruno, Joelinton, and Willock were all excellent in pressing, ball recovery, and vertical ball progression.

Saint-Maximin and Joelinton doubled up on Walker when Stones or Dias had the ball at the back. It was a risk as it left space between the lines, but a risk Howe was willing to take.

Stones attempts a lofted ball into Gündoğan but Schär reacts quickly to cut out the cross. 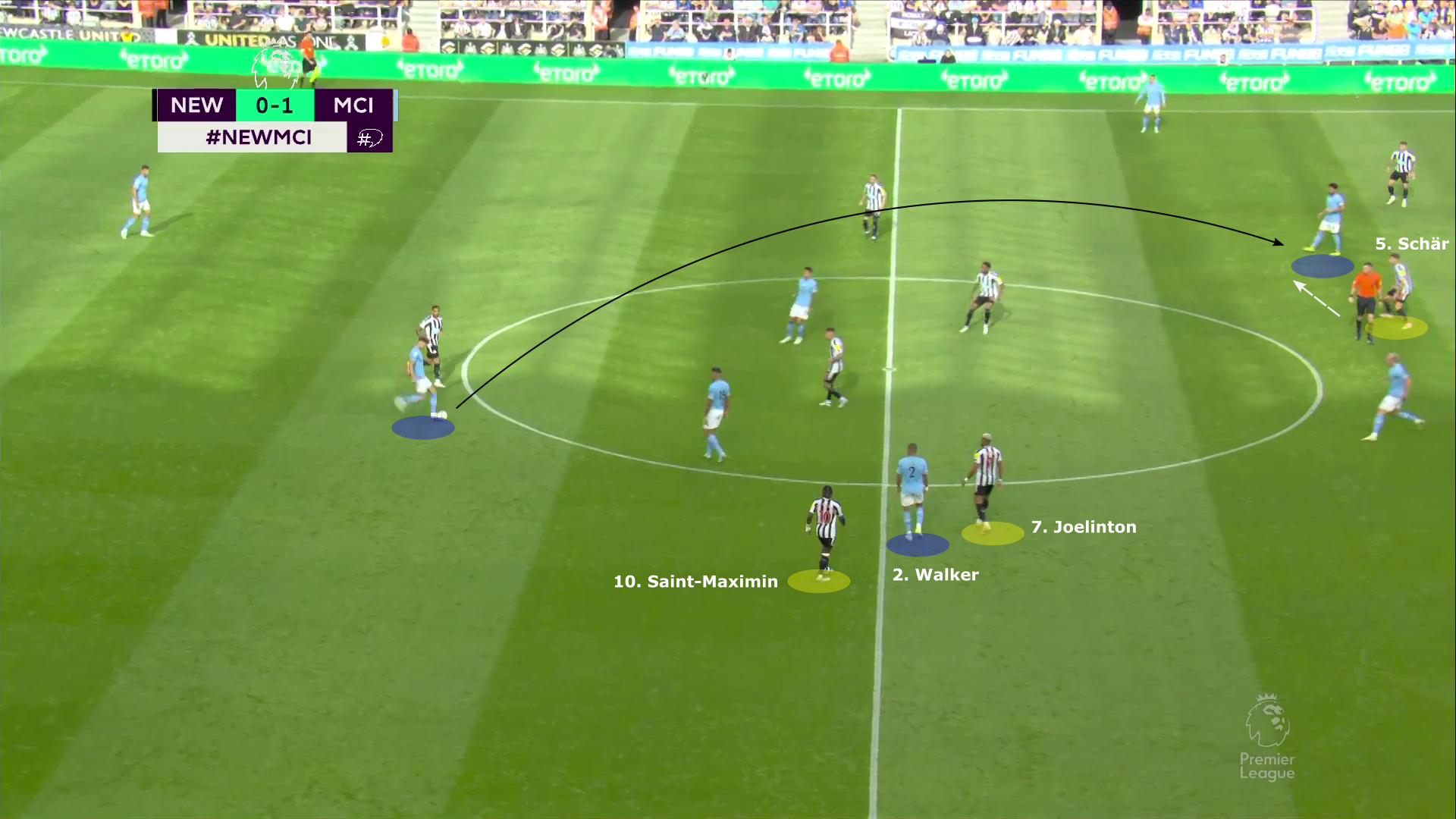 From there, Walker is caught ball-watching as Saint-Maximin begins his stride forward. 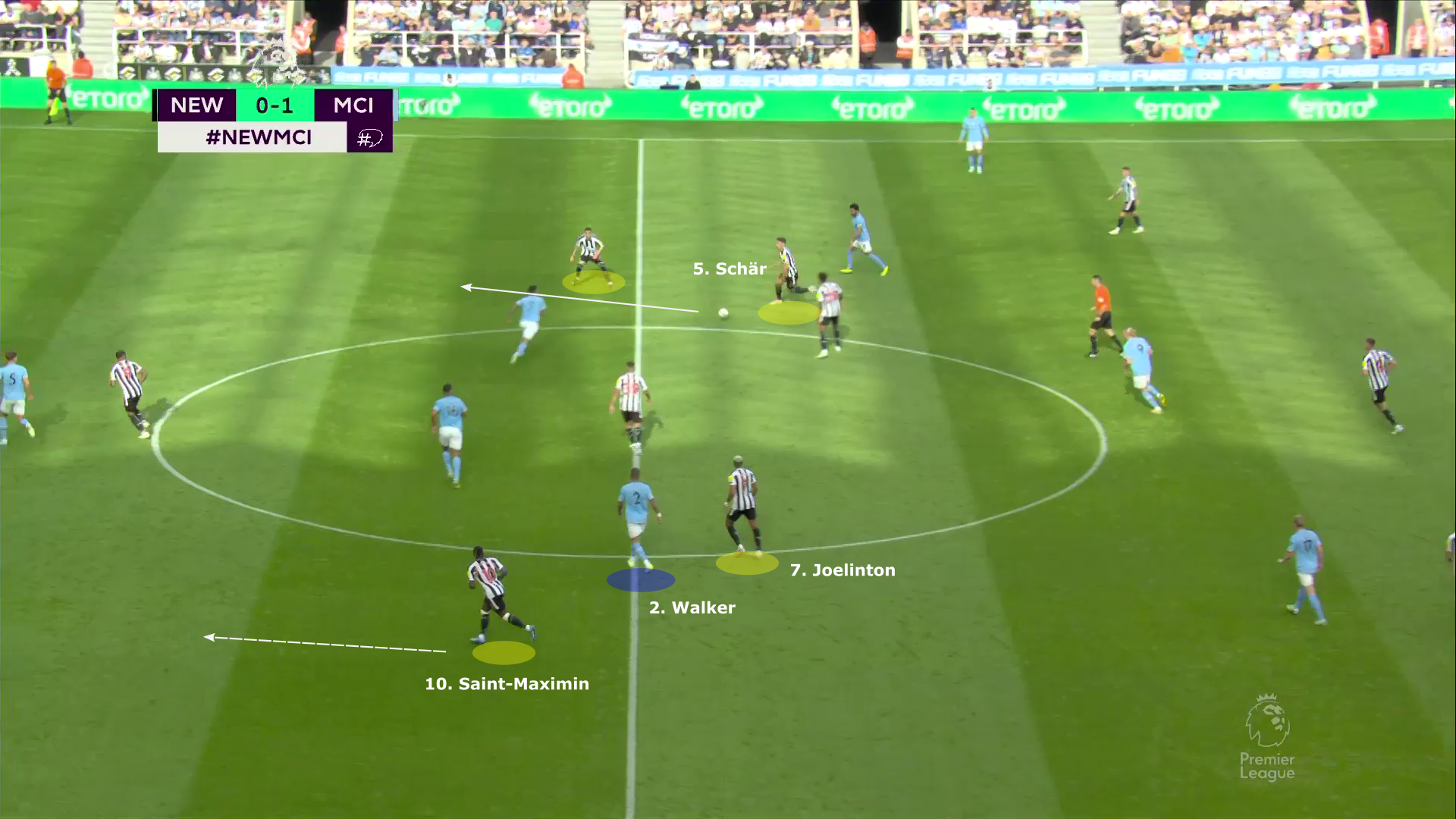 Almiron drives with the ball and feeds it to a wide-open Saint-Maximin on the left as he manages to get a shot on target but Ederson makes the save. 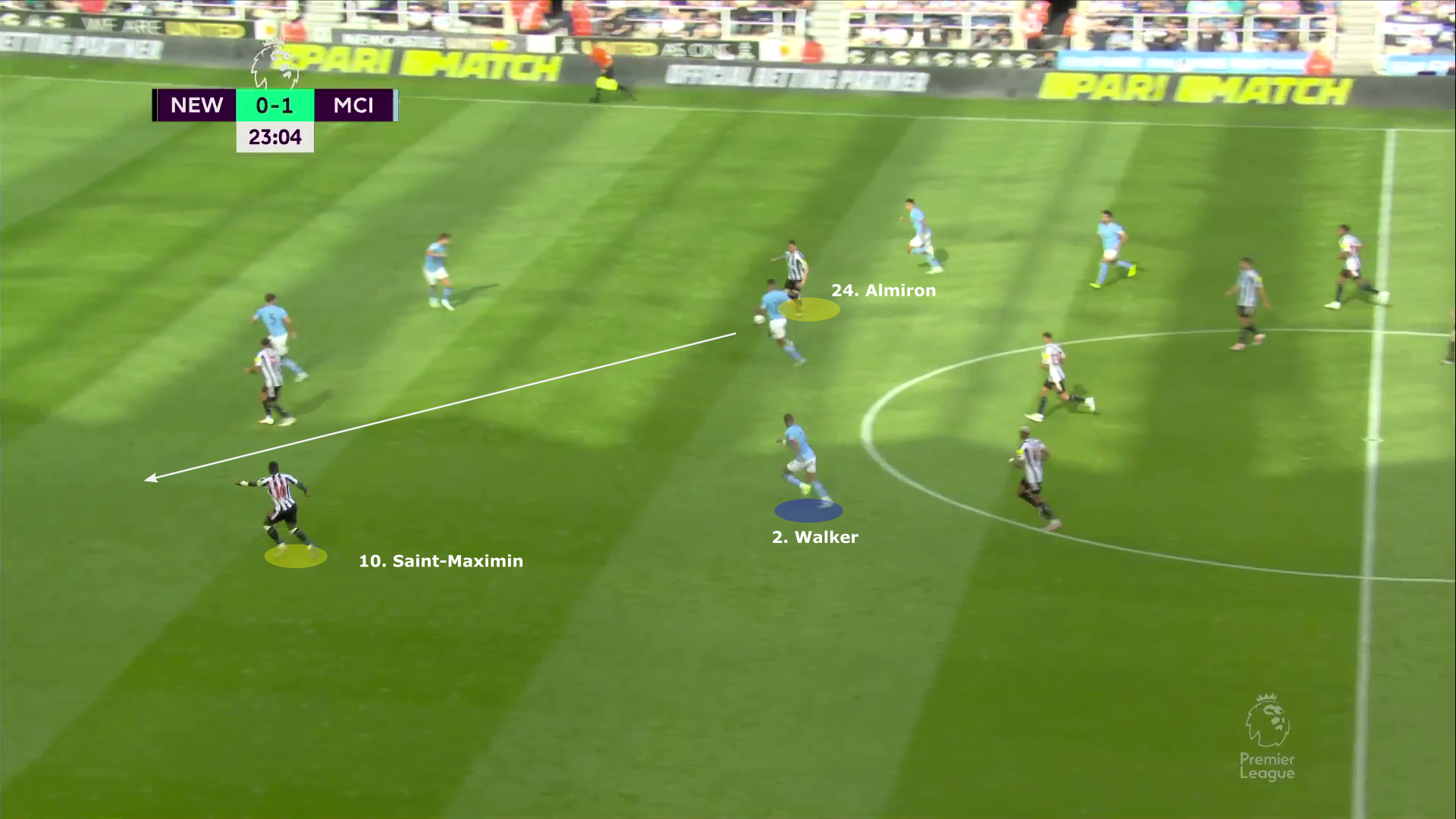 Howe’s decision to allow the French winger and Almiron to play behind inverted fullbacks worked brilliantly. With strong runners of the ball in Joelinton, Willock and Guimarães, Newcastle were able to break away rapidly. The message was clear: give it to Saint-Maximin.

The Magpies managed to get the equaliser as Almiron tucked away a glorious Saint-Maximin cross. But it didn’t end here. They smelled blood. They wanted more.

Time and time again, City would get beat in midfield, whether it was a loose pass or a lost second or third ball. When Newcastle had the ball in their box, they were looking for space in City’s half for their quick-footed attackers to run into instead of playing through City’s press. This is how the second goal came about. 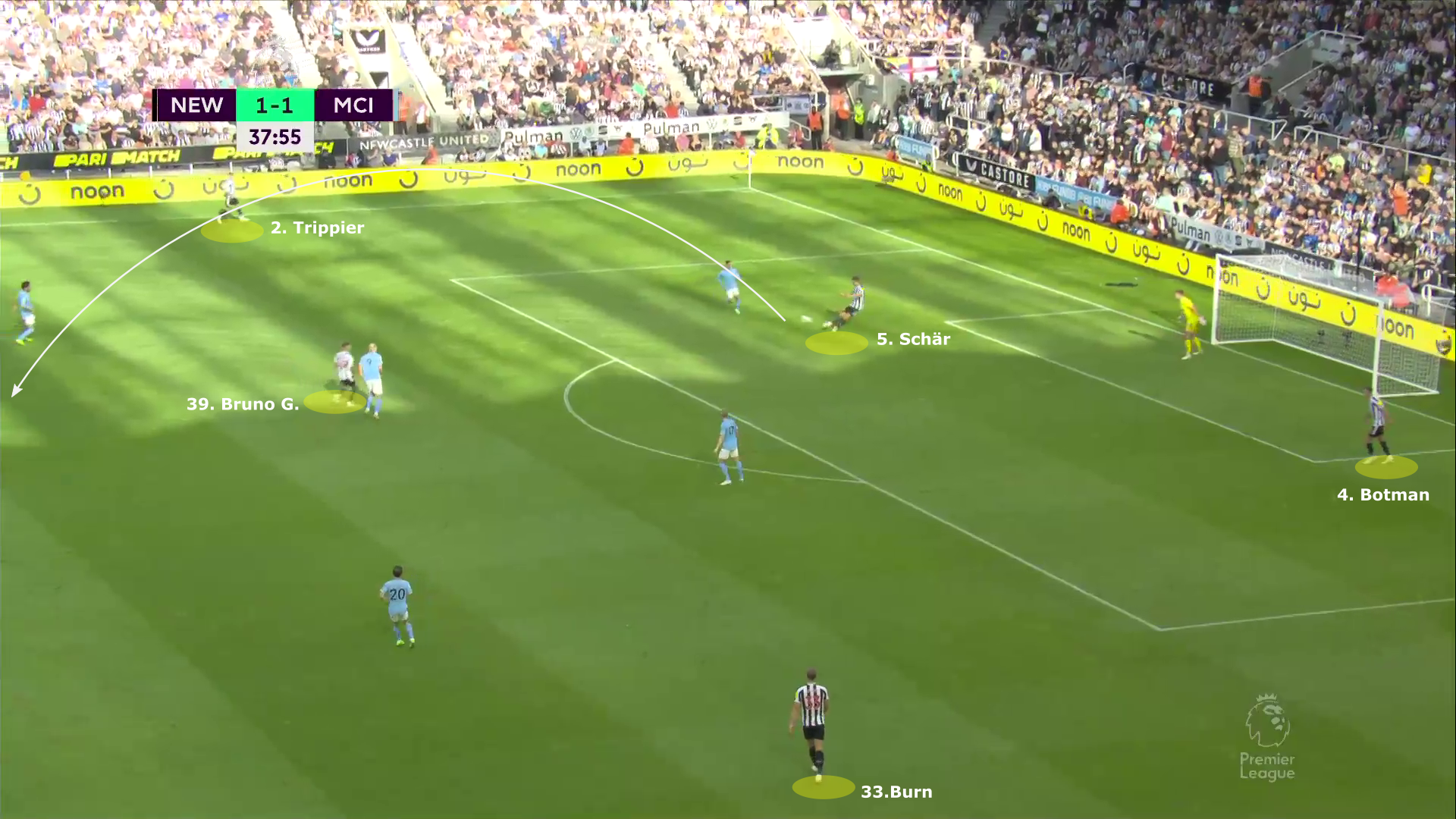 Schär plays a long ball towards Joelinton. The Brazilian forward-turned-midfielder was his team’s main outlet during the game. The idea was to attract Walker towards the cross. Joelinton wins the header and pings it towards the mesmerizing N0.10. 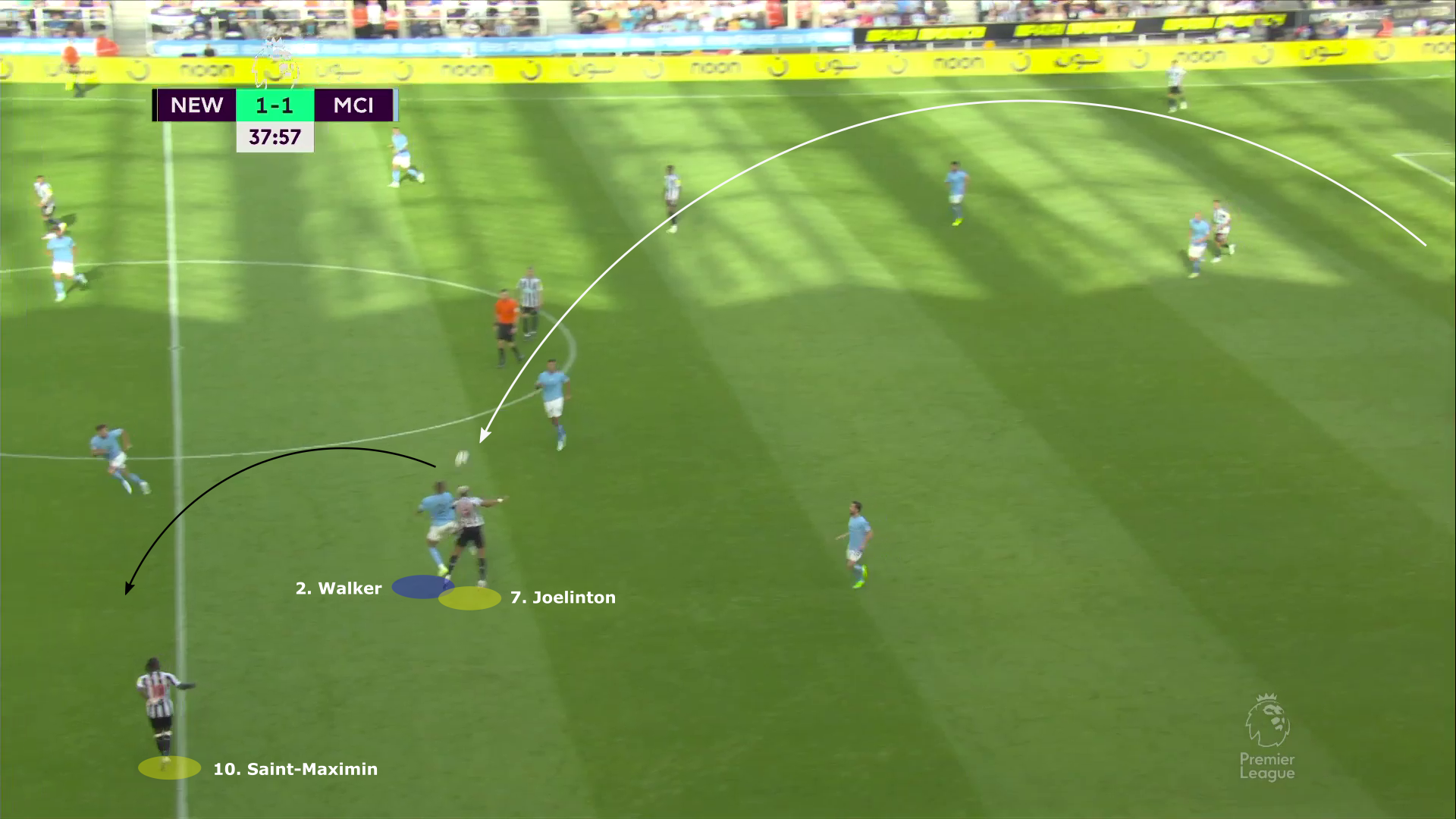 The winger then tore at Stones to set up Wilson who took a cool touch around Ruben Dias and finished superbly. Stones and Walker have been among the most consistent defenders in the Premier League over the past couple of seasons and they were taken apart time and again by Saint-Maximin who revelled in City’s defensive disorganisation. 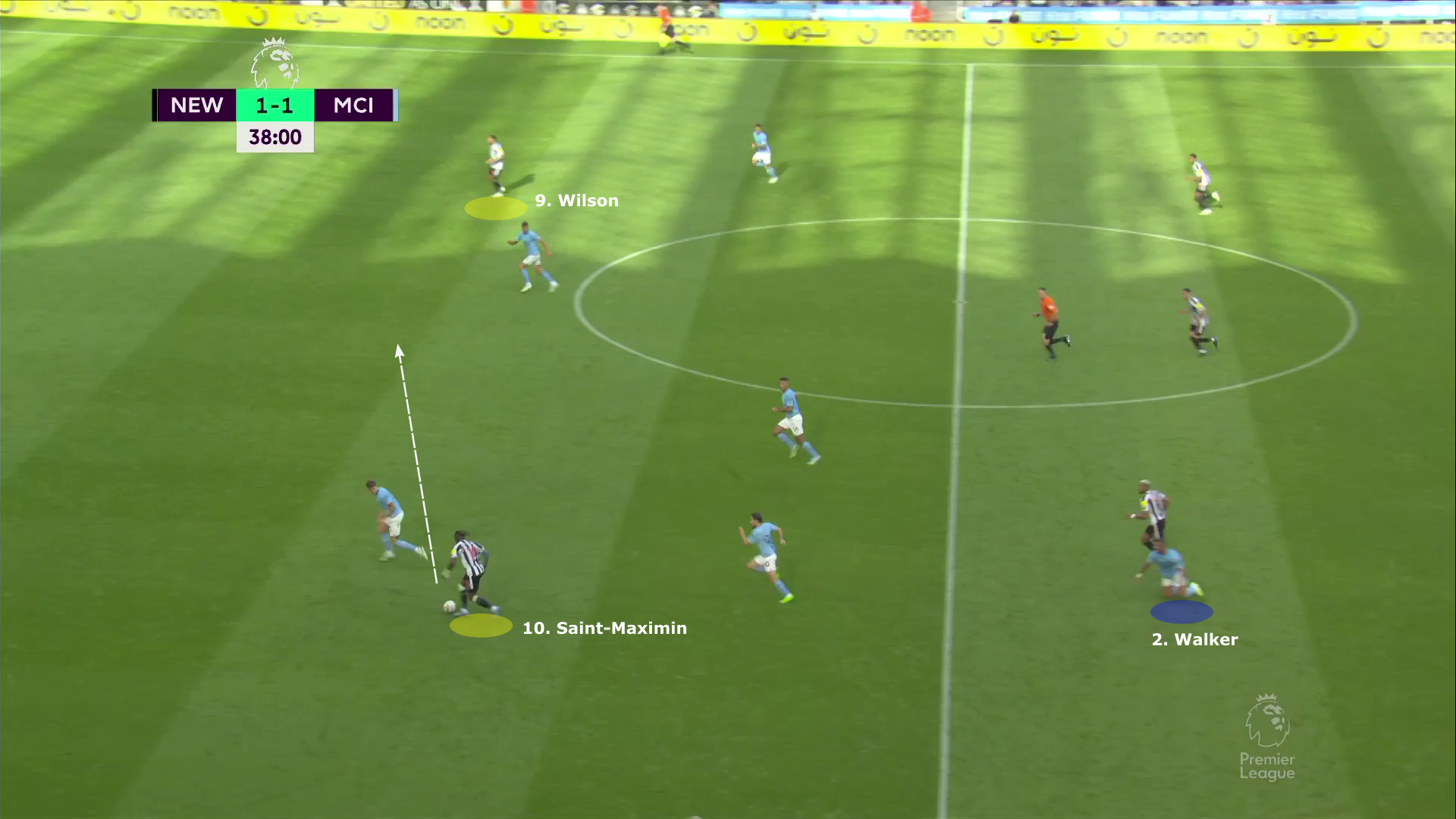 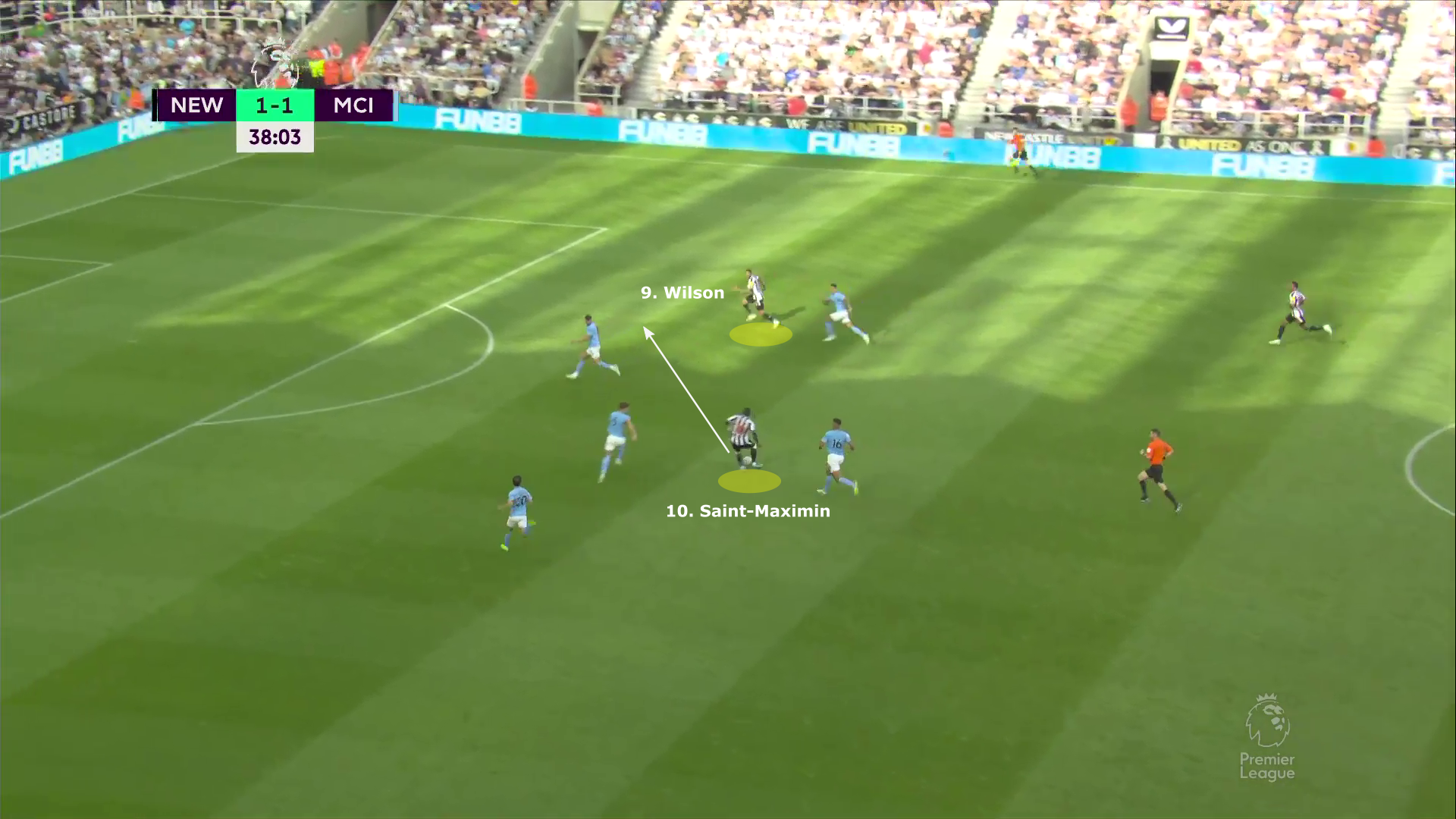 The Frenchman’s game by numbers:

The link-up play between Saint-Maximin and Joelinton was vital. The Brazilian completed 11 passes to his winger during the game, more than central defenders Botman and Schär managed between them (10).

Even when possession shifted high up the pitch, Newcastle still managed to break away in numbers. After a De Bruyne freekick was parried away by Pope, who put on a superb display in goal, the ball reached Burn inside his own box. He supplied a through ball to Joelinton on the left as City’s players were still out of position. 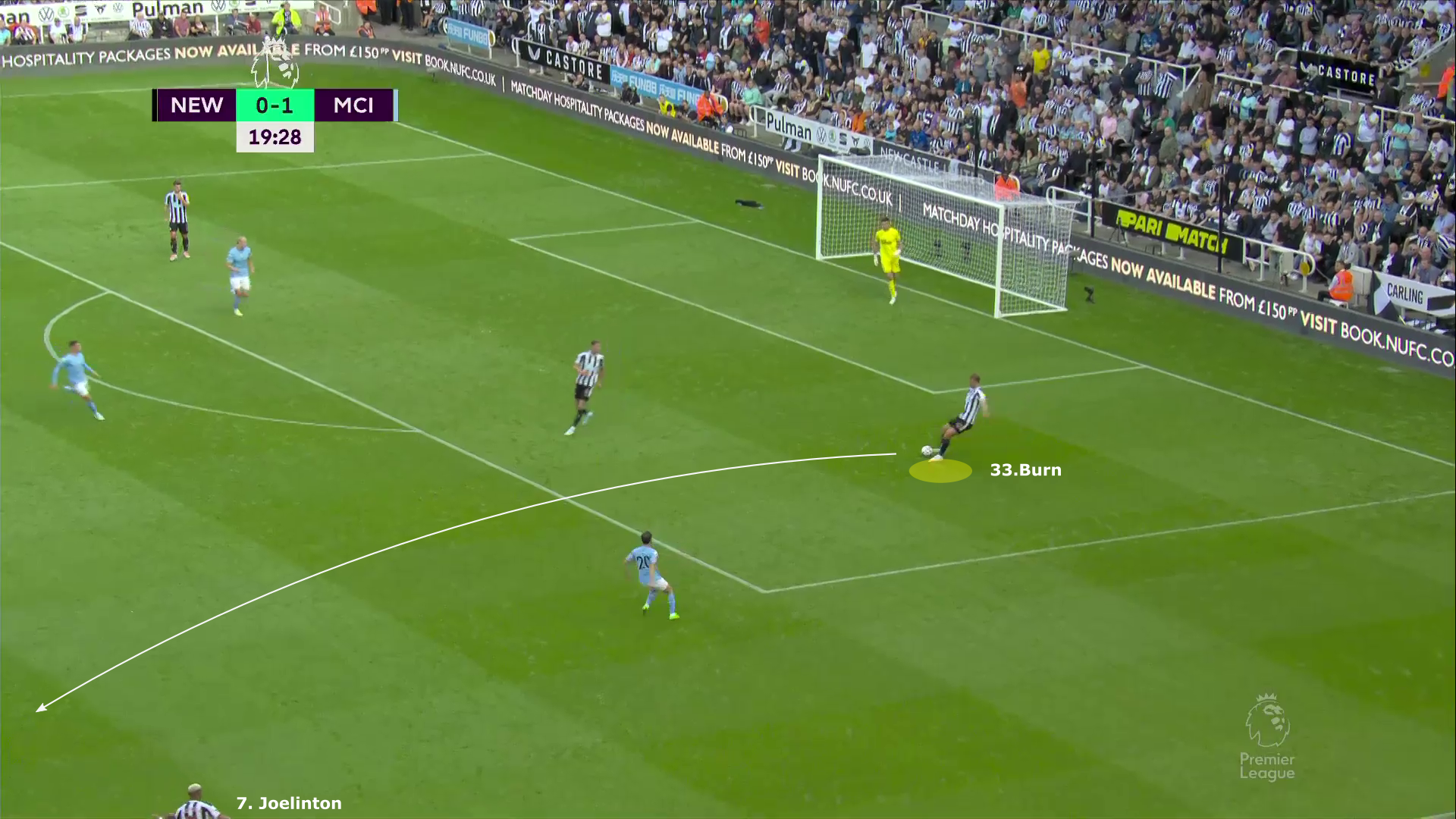 And now look at the options at his disposal. Saint-Maximin, Almiron and Wilson all burst in behind City’s back line. 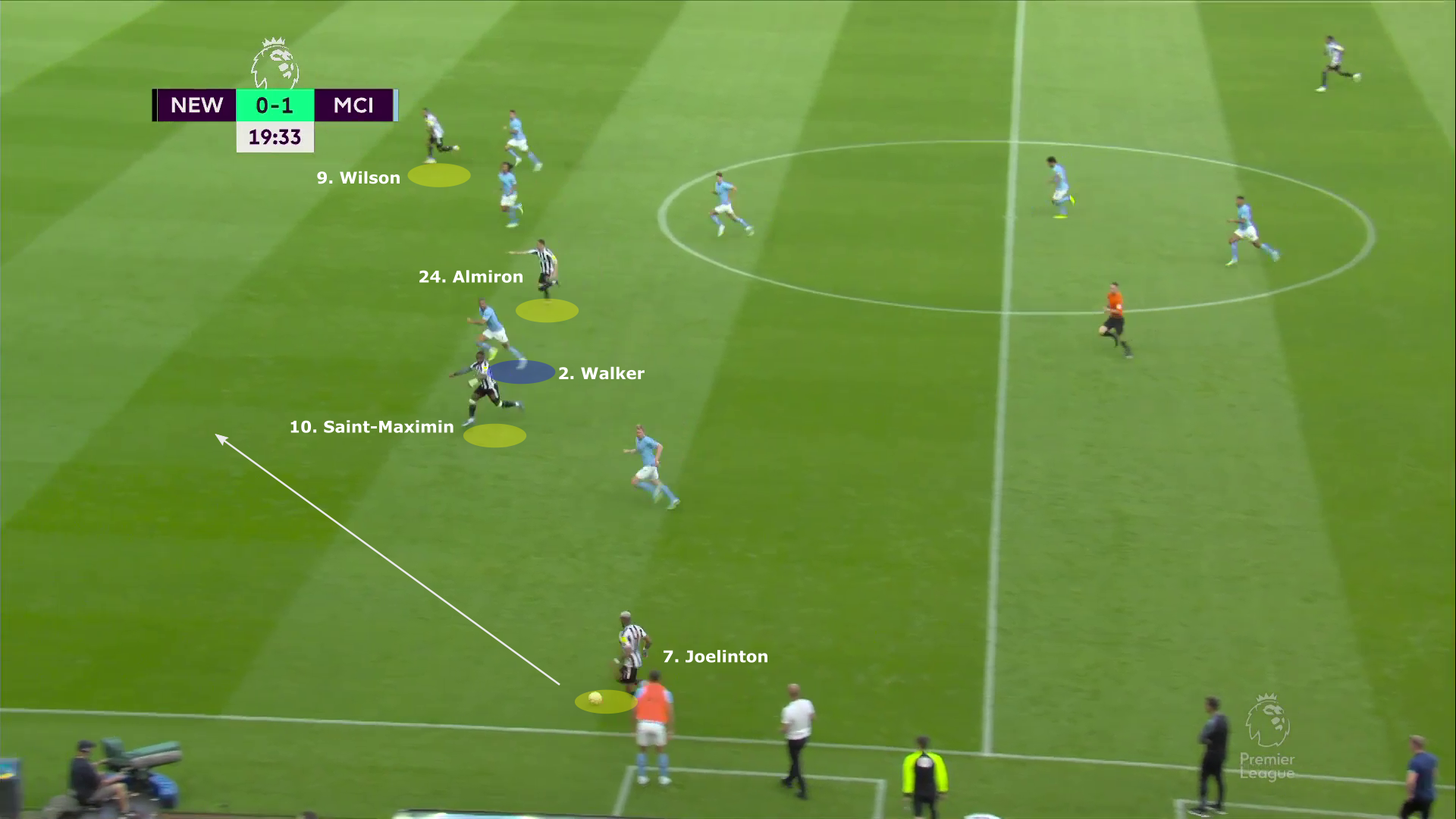 Newcastle ended the half deservedly in the lead after two glorious Saint-Maximin assists, and they could have been three had Almiron scored a clear chance from inside the box.

Speaking in his post-match interview Saint-Maximin said: “I think all the world saw what Newcastle is capable of doing. What we showed against Manchester City; it’s good to send a message like this to all the teams.”

When City commit five players forward, they leave gaps in their midfield. As Pep stated, Foden and Haaland were always looking to be aggressive and instantly drive forward. This resulted in City losing the ball in the final third and leading to Newcastle counters. The likes of Grealish and Mahrez would be more composed in these situations and would keep the ball flowing in the final third.

Pep acknowledged this at half-time and demanded his team come out with a different approach in the second half and stop playing into the opponent’s hands. He kept faith in the individuals on the pitch. Newcastle’s intensity in the press slowly dropped off, as no team could keep up this tempo for 90 minutes. But Trippier scored a sublime freekick in the 54th minute to give the home side a 3-1 lead.

An adjustment made by Guardiola was to drop De Bruyne in between the lines instead of him operating in the right half-space. City also started moving the ball quicker and more direct. The midfield three had options to progress the ball between the lines. De Bruyne’s influence grew as the minutes ticked by.

City began dominating and creating chances. At the hour mark,

Haaland poached at the near post to make it 3-2. Right after the second goal, we can see an example of City moving quickly.

Ederson rolled it to Rodri, who was able to get it quickly up to De Bruyne, before then putting Haaland through on goal. From the time Ederson catches it to the time Haaland gets a shot off was just ten seconds. Notice Haaland’s starting position when De Bruyne plays the through ball. The distance he gains on the centre-backs is astonishing! 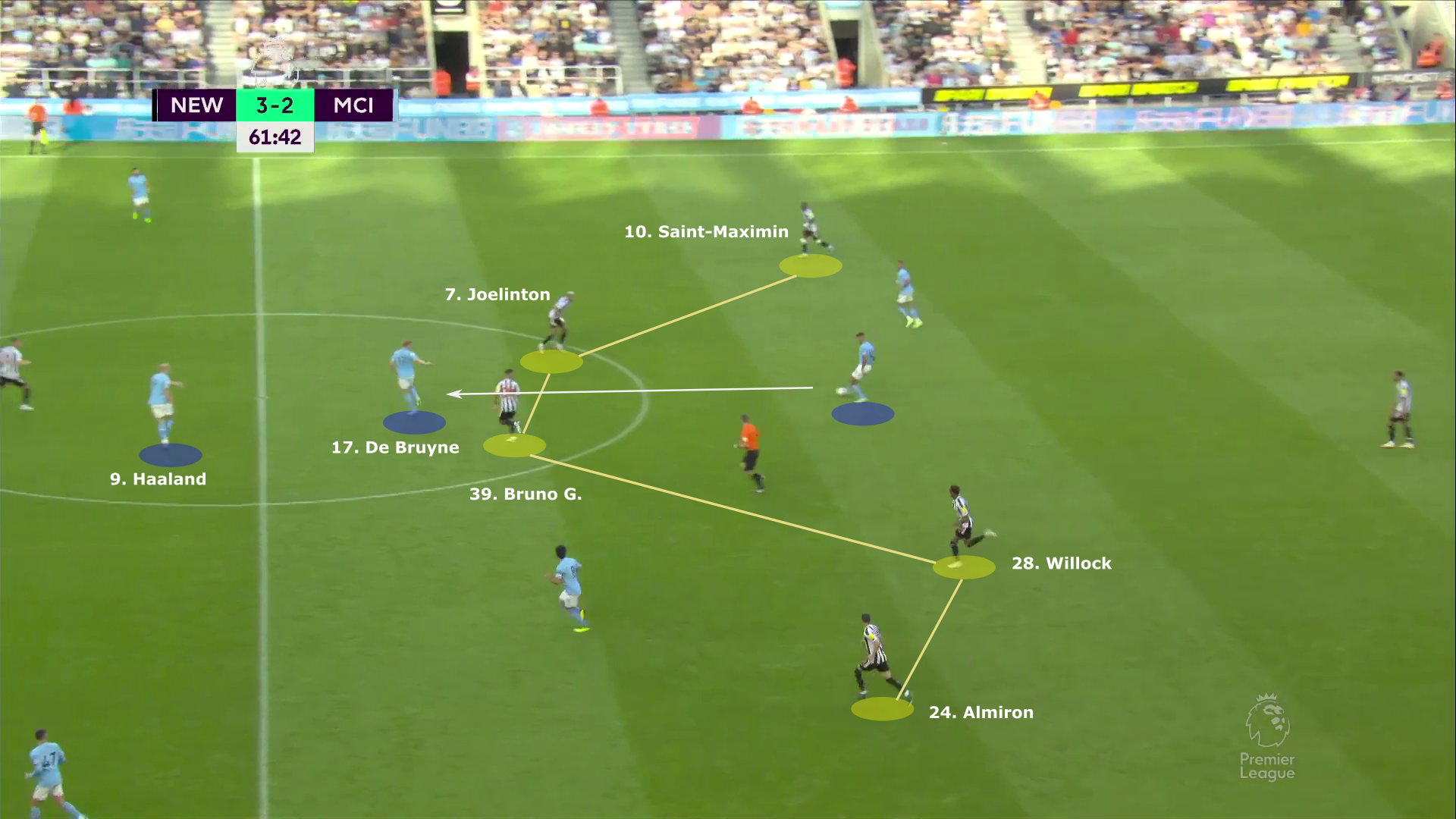 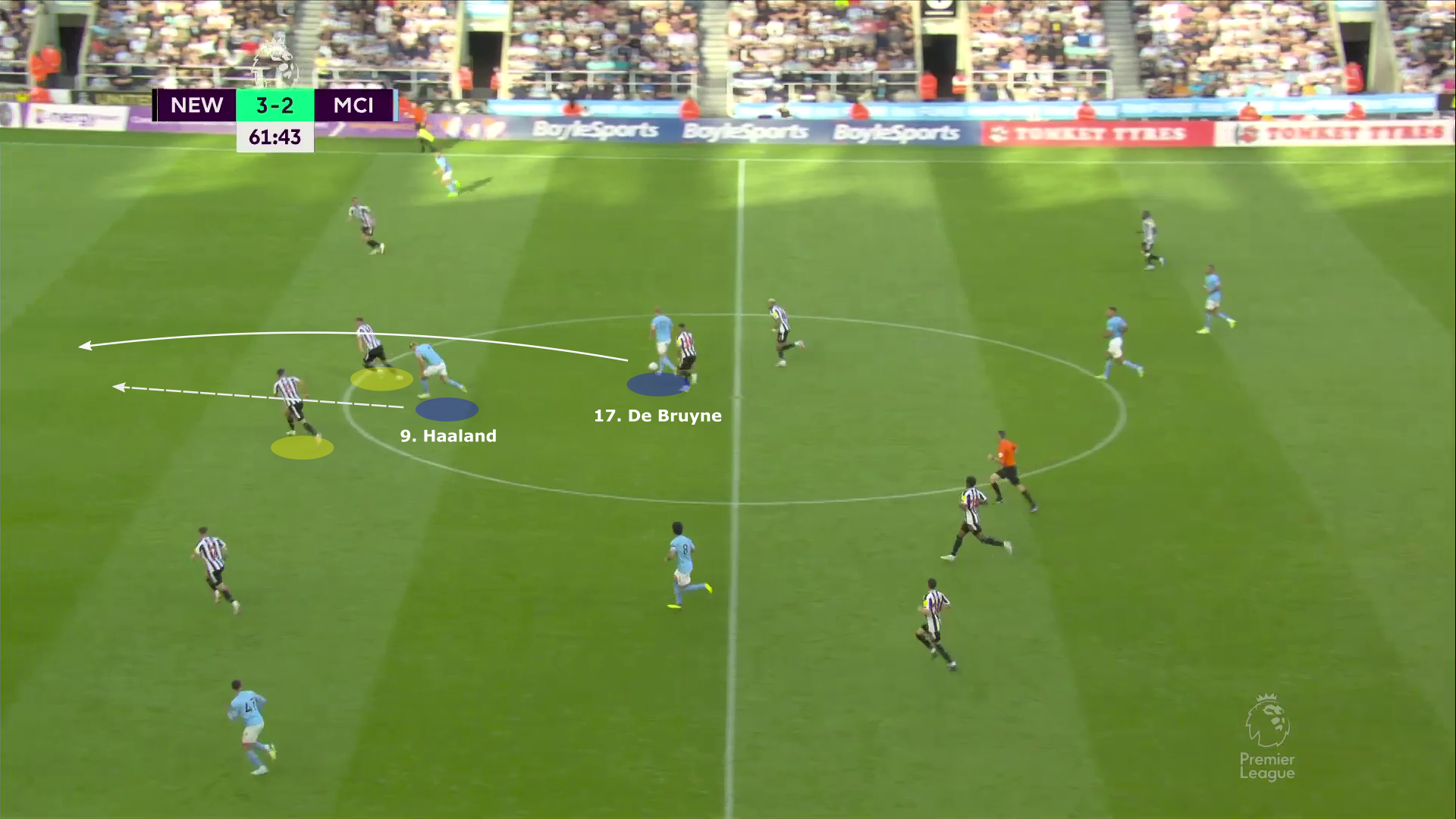 The equalizer came so early (65th minute) that City genuinely felt they could win it, but they couldn’t find the finish despite mostly dominating after the equalizer. Newcastle held their own and came away with a result.

After Chelsea’s 3-0 defeat at Leeds earlier in the day, not to mention Liverpool and Manchester United’s struggles, the big six have witnessed some early season chaos. Manchester City became just the fourth side ever to avoid defeat in three straight Premier League matches when falling two or more goals behind.

For Newcastle, this is their best unbeaten start to a league campaign for 11 years. They now have five points after three games. Last season, it took them until November 6th to reach five points, highlighting the progress under Howe.

The Toon started brilliantly and went 3-1 up, but perhaps should have eased off their adventurous approach with that lead to defend the result.

“That was the intent from the start,” Howe said. “We conceded early and that certainly wasn’t what we wanted to do but in conceding the goal maybe some of the pressure came off us and we then executed a really good performance, when we were (on the) front-foot, everything we tried … but it’s easier said than done against Man City.”

Guardiola agrees. “Newcastle is growing, they want a leading role in the game, they have pace, they have quality. It’s a difficult, difficult place to come,” he said.