Tottenham Hotspur can certainly claim they had a good transfer window this summer. Towards the end of last season, Mourinho insisted repeatedly that he was short of resources after several of his key players were injured and also mentioned he had to go for a gun fight without bullets. Kane has had repeated ankle and hamstring troubles over the last few years, Son Heung-Min suffered a fractured arm last season, and the left back has been a problem position for Spurs every year when Ben Davies is injured. Spurs really needed to invest this window and put together a squad that was capable of challenging for trophies and rightly so they did, signing seven players – Hojbjerg (DM), Doherty (RB), Reguilón (LB), Vinícius (CF), Hart (GK), Bale (RW) and Rodon (CB). Given that, they are also in the Europa league, the scheduling could become a real problem as their season progresses and a good squad depth is needed to have fresh players for a game after every three days.

The following visualisation shows Spurs’ squad depth for the 2020/21 season. 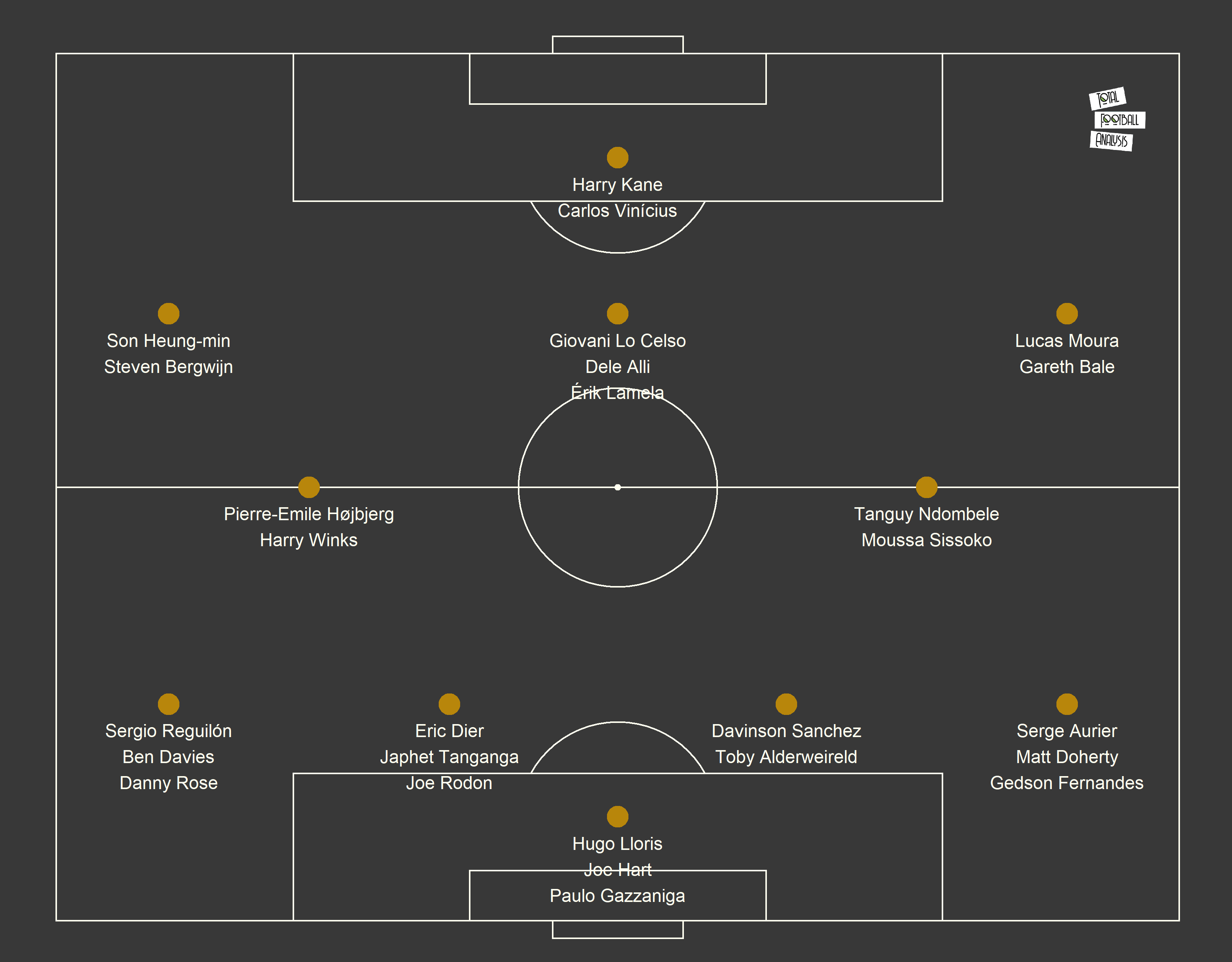 Spurs have predominantly used the 4-2-3-1 formation under Mourinho and sometimes the 4-3-3.Tanguy Ndombele, who was out of favour and injured for the most part of last season, has really worked his way into the starting eleven and looks set to have a run of games. Summer signing Pierre-Emile Højbjerg looks to be the preferred option at defensive mid. Similarly, Sergio Reguilón is the preferred option at left-back. Tottenham also now have a back up striker option in Carlos Vinícius, who was signed on loan from Benfica. Matt Doherty, another summer signing from Wolves, can play in a back three or back four, while Serge Aurier is also an option at right back. Mourinho has already rotated both the players for that position. Matt Doherty is first choice for now, but it will be interesting to see who holds on to that full-back position in the long run. After the draw against West Ham United, Mourinho insisted that every player, including Gareth Bale, must fight and earn a place in his team and nobody has a free run. The Welshman will surely be integrated slowly into the starting eleven and will likely be the preferred option over Lucas Moura and Steven Bergwijn.

Spurs have a right balance of attack and defense in the squad and have one the best squads in the division right now. The chairman, Daniel Levy, first appointed Jose Mourinho in the quest for trophies and has now assembled a squad that is capable of doing so. It is now in the hands of the manager and the players to take this challenge forward. They have had a fairly positive start so far to the season, but the fixtures quickly pile up and get tricky. There is quality to fight on all fronts. Only time will tell as to whether they will find success.