The talented Brazilian winger Everton arrived at Benfica to prove he can be one of Europe’s top players. The former Grêmio player is known as “Cebolinha”, with trophies of Brazilian Cup and Conmebol Libertadores under his belt, and he made several appearances in the Brazilian National team, also winning the Conmebol Copa America last year.

In this player analysis, we’ll take a look at how he helped Grêmio to become one of the greatest Brazilian teams in recent years. We’ll see the statistics of Everton, speculated earlier in the EPL, and how his tactical movement and skills can contribute to Benfica achieving higher objectives throughout the season.

Before we look into the attacking qualities of Everton, we’ll check a few statistics on his defensive positioning. Playing as a left-winger in the 4-2-3-1 formation at Grêmio for the past years, Everton developed a sense of good defensive movement.

Having 1.96 average defensive duels per game, he also recorded a 50% success rate in ball retrievals, with an average of 3.91 recoveries per 90 minutes. In the image below, we see him positioned in the line of three midfielders while attempting to close the opponent’s option to pass. 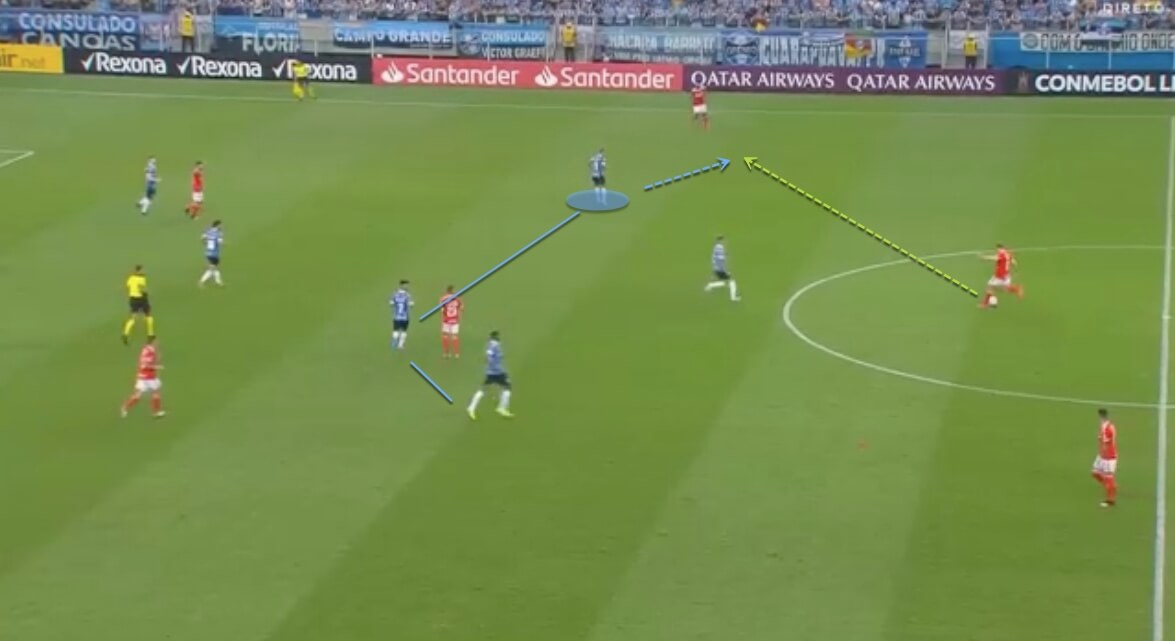 Playing against teams that did not offer too much pressure in the opponent’s defensive zone, Everton was able to read the free spaces and be an option to quick offensive transition. In the image below, we see a frame of a Conmebol Libertadores match, where Everton returns to his own field to receive the ball and progress. 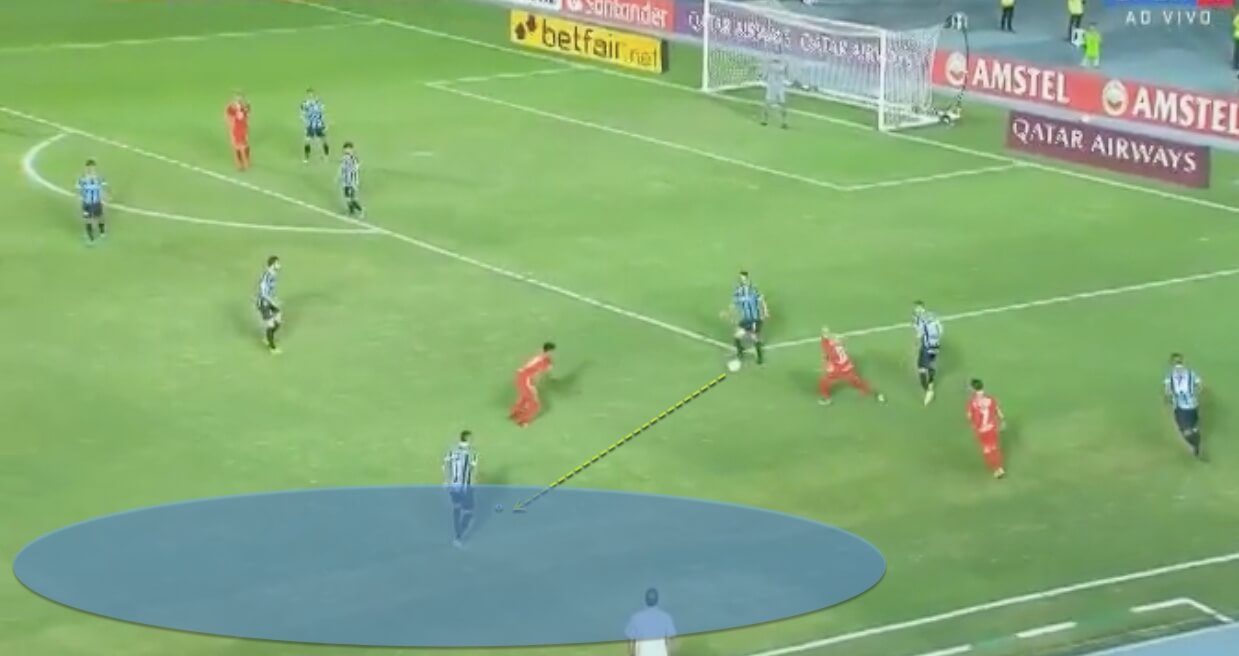 In the Brazilian Championship last year Everton had an average of 0.5 interceptions per game with also 0.5 tackles won in his third. His excellent sense of positioning and reading of the match makes him an excellent cover for the left side-back on the defensive transition.

In the image below from the Club World Cup semifinal against Pachuca in 2017, Grêmio’s defence is closing the inside of the field while defending. Everton is running back following the opponent’s winger to disable the pass option.

Moreover, Everton has an excellent recovery that can contribute to the team in the defensive zone. In comparison with Richarlison, his fellow mate in the Brazilian National Team, the map attribute below shows Everton’s attributes (green blocks), especially defensive, higher than the more experienced Premier League player. 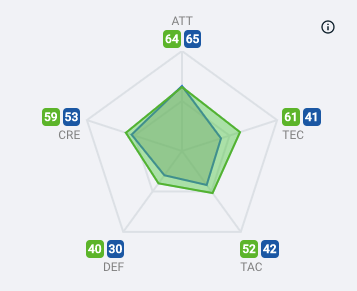 Using his good reading of the match, Everton is always looking for spaces in the pitch. By attacking in the flanks with field to progress, usually, he is lethal on 1-vs-1 confrontation.

Especially when the ball is recovered on his side, and he initiates the counter-attack the chances of goals opportunities are clear. The image below shows him intercepting the ball in a defensive movement and rapidly growing the offensive transition to create a goal opportunity. 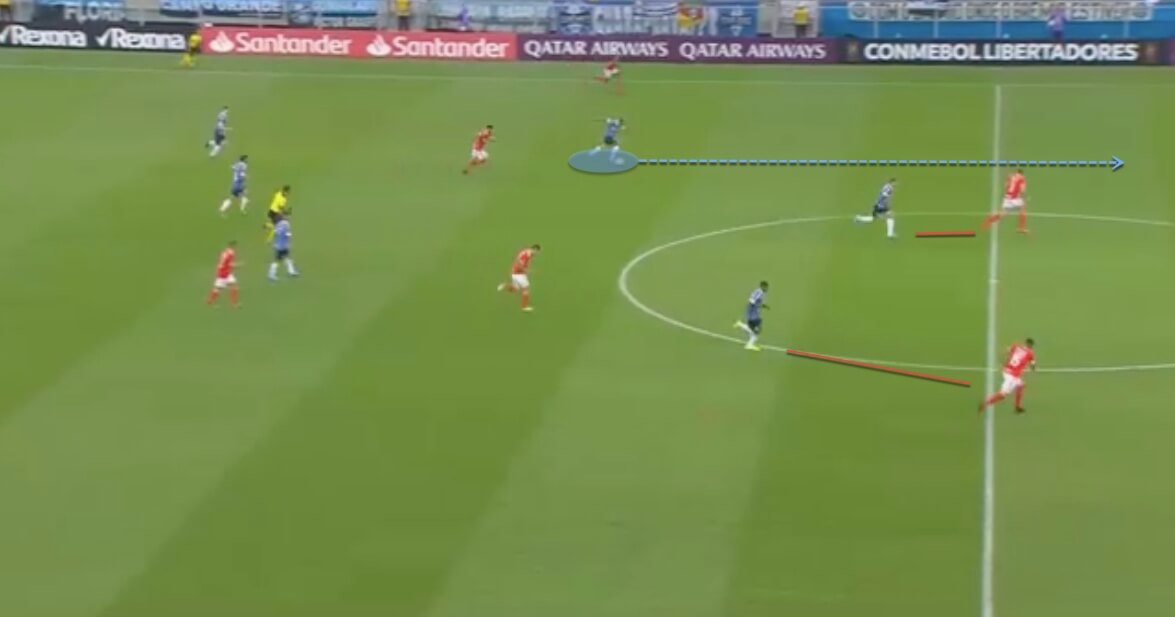 His progressive run on the pitch shows the use of his speed to attack the spaces. When there’s a clear room, he goes for the confrontation, especially towards the area. He delivered 68% of accurate passes inside the penalty area on the left flank and 51% of accurate crosses.

In the final third with space to move, Everton has 74% of the ball kept possession against the opponent’s right-back with 1.68 xG. Against the centre-back is 58% and with 3.05 xG. The chart below shows the number of dribbles in the final third. We can see how many of those proceeded with a shot on goal, Everton is a quick shooter. 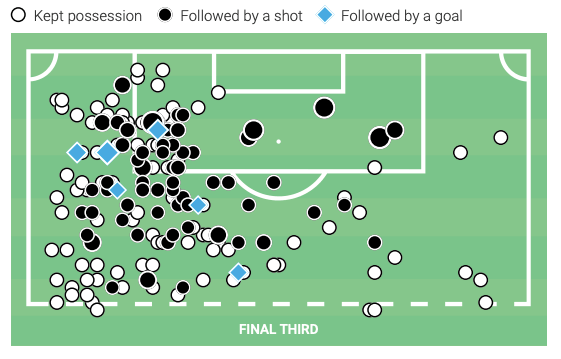 Shots on goal and assists

Everton uses his speed not only to run but to make quick movements of dribbling and shooting. Last season was 39% of shots on target with 50 shots outside the penalty area. He’s specialist in receiving the ball in the left flank, cut to the middle and quickly shot with his right foot.

He’s already showing his skills in Benfica. In his first goal for the club, he receives the ball in the left flank, gets rid of the two defenders and takes the conclusion from outside the area. We can see in the image below that even with the opponent’s closing the area, Everton managed to take a perfect shot to the goal. 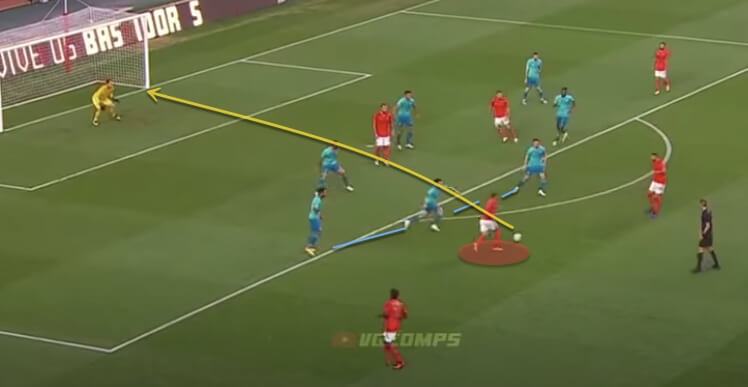 But not only that. Everton is a tenacious header. He’s only 1,74cm tall but he has a good impulse when the ball comes aerial in the penalty area. Last season was nine headers to the goal, almost 10% of total conclusions, not bad for a winger.

Assisting in the final third has been one improvement of Everton. In the Brazilian Championship, last season was 0.9 key passes per game with five assists, and five big chances created. In the first match of Liga Nos this season he gave already three key passes and one assist to the goal.

The quality of the assistance is essential, and in the image below, we see a combination of his skills. In the left flank confronting the opponent, he made the dribble and found the space to cross the ball to the striker’s head scored the decisive winning goal.

We can see in this scout report that Everton “Cebolinha” has the talent and accuracy to present alternatives to help Benfica win the Liga Nos this season. The club objective is clear, and the manager, Jorge Jesus, is undoubtedly counting on Everton’s tactics and goals to raise the trophy.

Coupled with an outstanding understanding of the game and precision with his abilities, Everton “Cebolinha” is hoping to get even better to earn a spot next to Neymar, Ligue 1 player, in the Brazilian National team. In this player analysis, we saw that quality and talent he’d shown he have and now is the time to improve against the big ones in Europe. 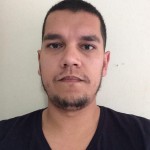 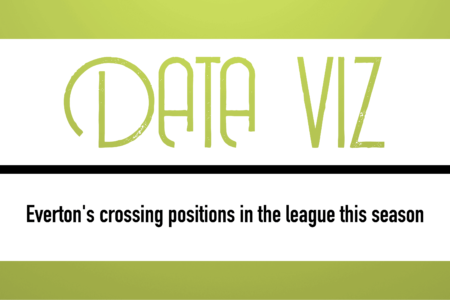 Everton’s crossing positions in the league this season

Everton had a good start to this Premier League season sitting in fourth place after seven matches. They made some […]