After years of tried and failed attempts to secure a stable situation for a Major League Soccer franchise, former English footballer David Beckham has finally succeeded in the creation of a new team in MLS: Inter Miami. The 25th MLS franchise has just begun its inaugural season and has brought in attacking midfielder Rodolfo Pizarro to lead it. This tactical analysis scout report will examine Pizarro’s style of play and discuss how he will fit in at Inter Miami.

Rodolfo Pizarro graduated from the Pachuca youth academy and made his senior team debut at age 18 at right-back. He eventually moved to the attacking positions and thrived at multiple Liga MX clubs, winning the CONCACAF Champions League twice (once with Guadalajara, once with Monterrey), and the Liga MX Clausura three times(once with Pachuca, Guadalajara, and Monterrey), all in the past five seasons. Add in a 2017 Copa MX title with Guadalajara, and even at only 26 years of age Pizarro is already one of the more decorated players in North America. He was finally signed by Inter Miami in February, becoming the third-most expensive signing in MLS history.

Despite being controversially left out of Mexico’s 2018 World Cup squad, Pizarro has received regular call-ups from the national team as of late, playing roles in the 2017 Gold Cup, the 2019 Gold Cup, and the 2019/20 CONCACAF Nations League.

Pizarro’s primary positions are in the attacking half-spaces and central attacking areas. Inter Miami manager Diego Alonso, who also coached Pizarro at Pachuca and later at Monterrey, plans on utilising Pizarro’s ball-carrying and chance-creating skillset in these attacking zones. 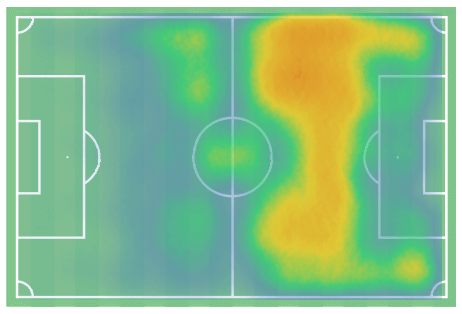 In Pizarro’s heat map at Monterrey last season, we can see how Pizarro moves across all attacking areas of the pitch. Also notice the faded areas behind the halfway line, as Pizarro will consistently drop back in the half-spaces to receive the ball during buildup. 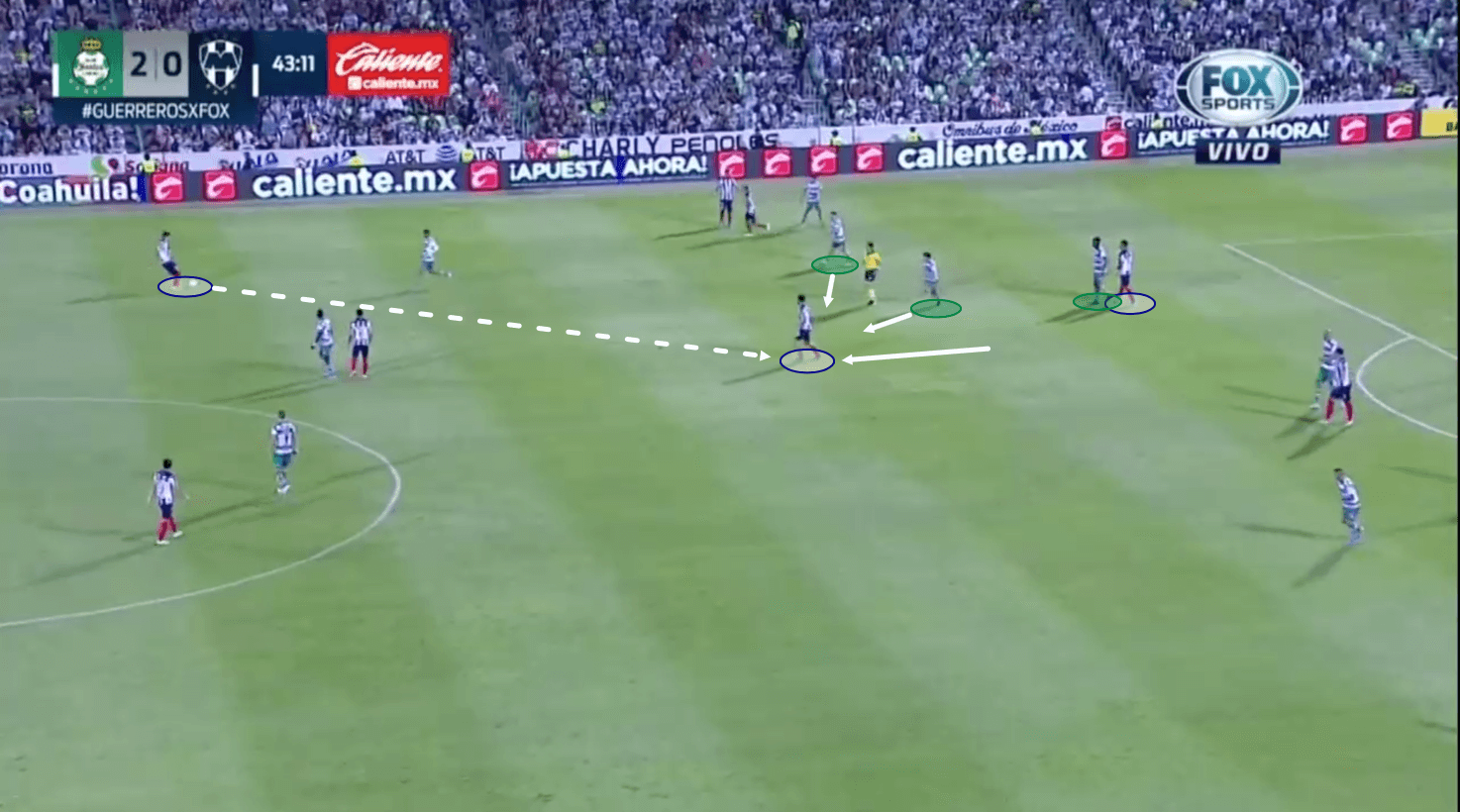 This is a common example of the positioning Pizarro takes up to receive the ball. Often with his back facing the opposing goal, Pizarro will drop back at various lengths to receive the ball in buildup. Being the central attacking figure on his side, he usually invites pressure. Here, two players press him once he receives the ball in the half-space. 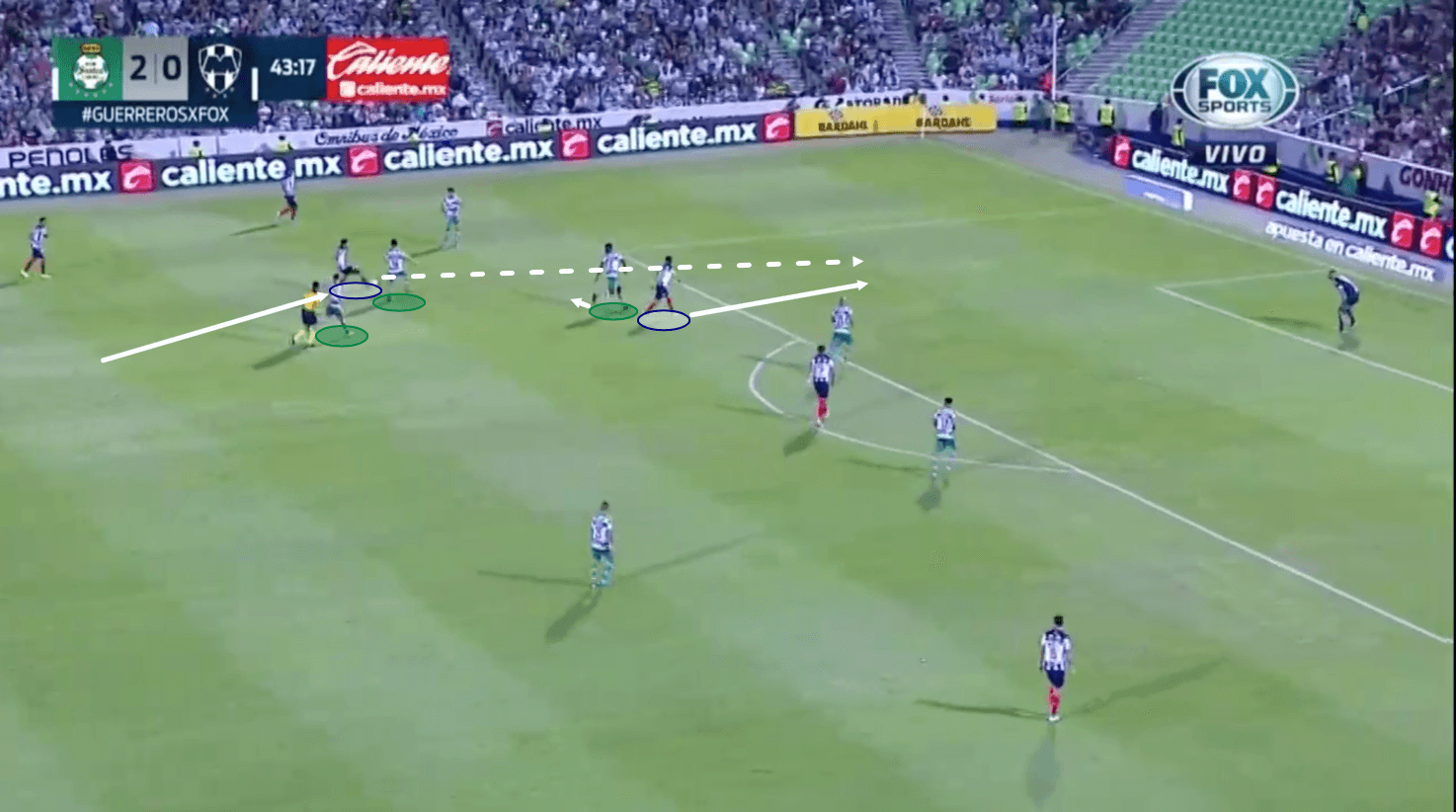 Pizarro is excellent at evading pressure. Using his ball control he dribbles past the two pressing players and progresses the ball down the half-space. The ball-side centre-back, who was marking the left-forward, decides to drop back slightly to help prevent Pizarro from progressing any further. This allows Pizarro to complete a pass from the advanced half-space area into an open dangerous area in the box after the forward gained separation from the centre-back. 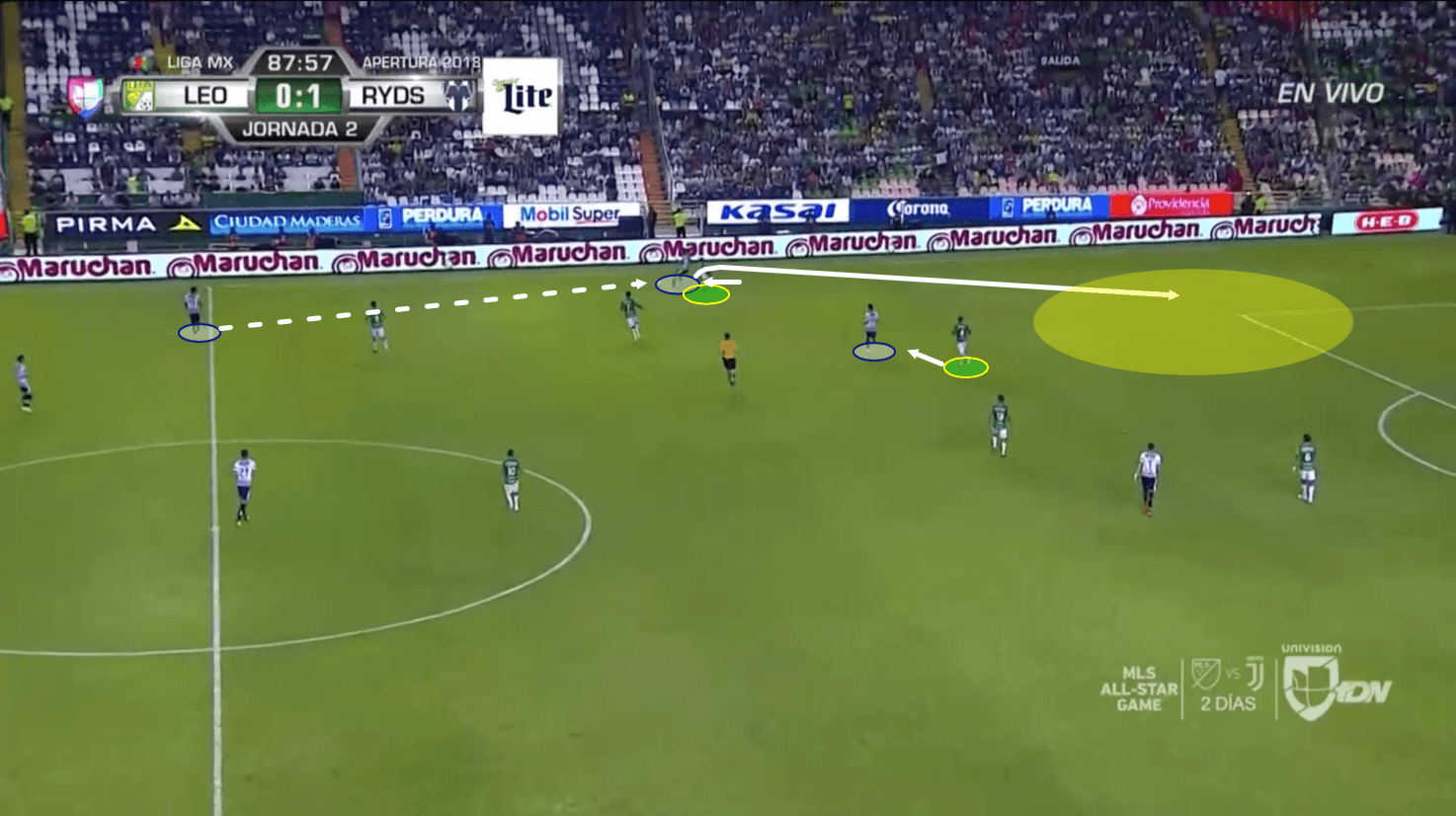 This is another good example of the positioning of Pizarro off the ball, in this case in the wide area. He drops back to receive a pass from the backline, and uses his body to shield the ball from his defender. He is then able to smoothly turn along the touchline with his body between the ball and his man and continue progression towards the opposing box, where space has opened up.

Pizarro excels at receiving, turning, and protecting the ball under pressure. Once he gains possession, Pizarro uses various methods to progress down the pitch.

This 2019/20 Liga MX season (combining Apertura and Clausura), Pizarro proved statistically that he is among the best attacking players Mexico has to offer. Before leaving for MLS, he ranked seventh in the league in progressive runs per 90(3.1), ninth in through passes per 90(1.61), 10th in smart passes per 90(1.55), and 23rd in key passes per 90(0.6), leading his club in the former three categories. Alonso utilises counter-attacking as the primary mode of attack, and this is a method Pizarro has experience in. 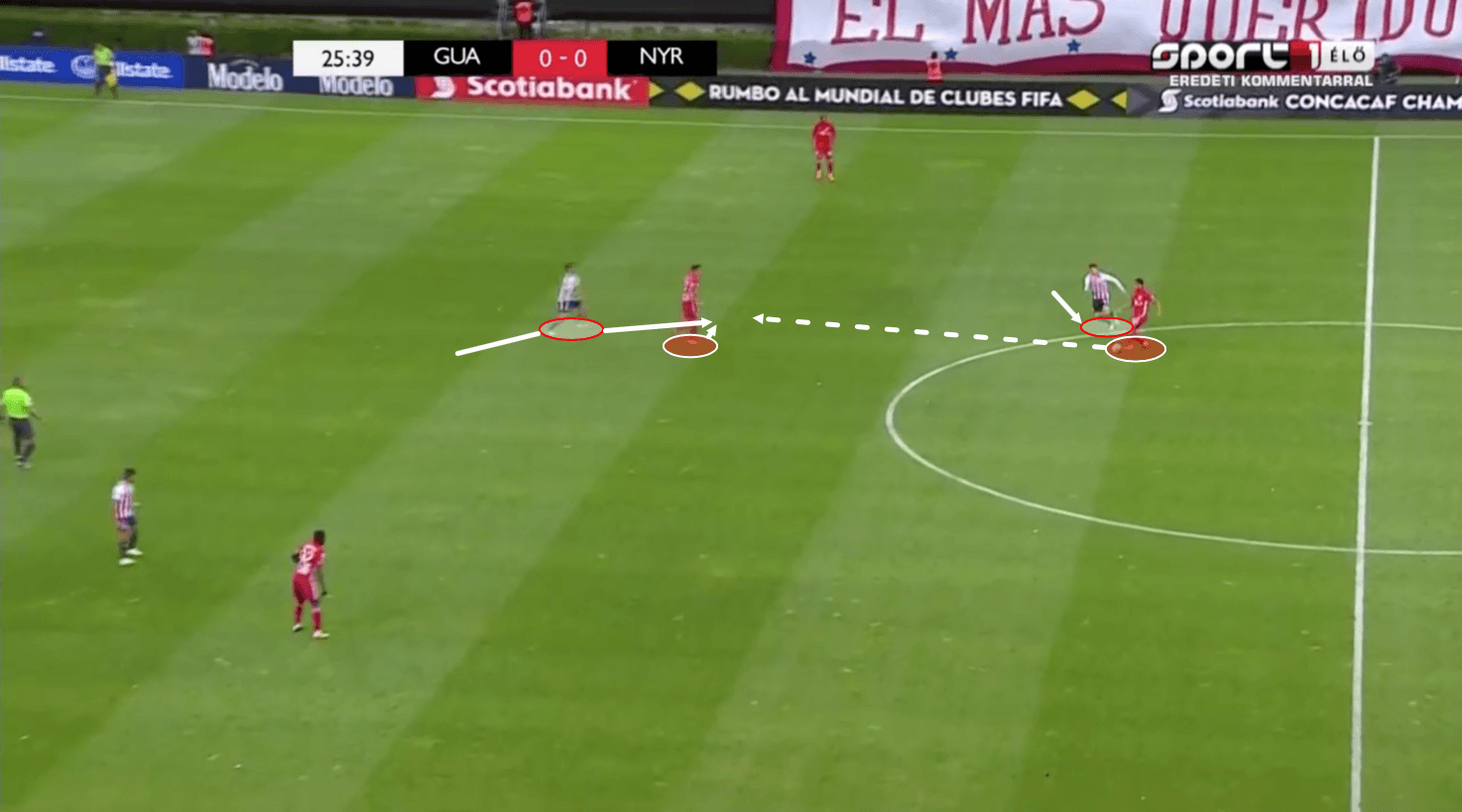 During his time at Guadalajara under Alonso, Pizarro generally played in a counter-attacking setup. Here, he presses his man from midfield in his own half at the right angle to intercept the pass. From this press position, he can quickly transition from defence to attack, igniting a 2v1 situation. 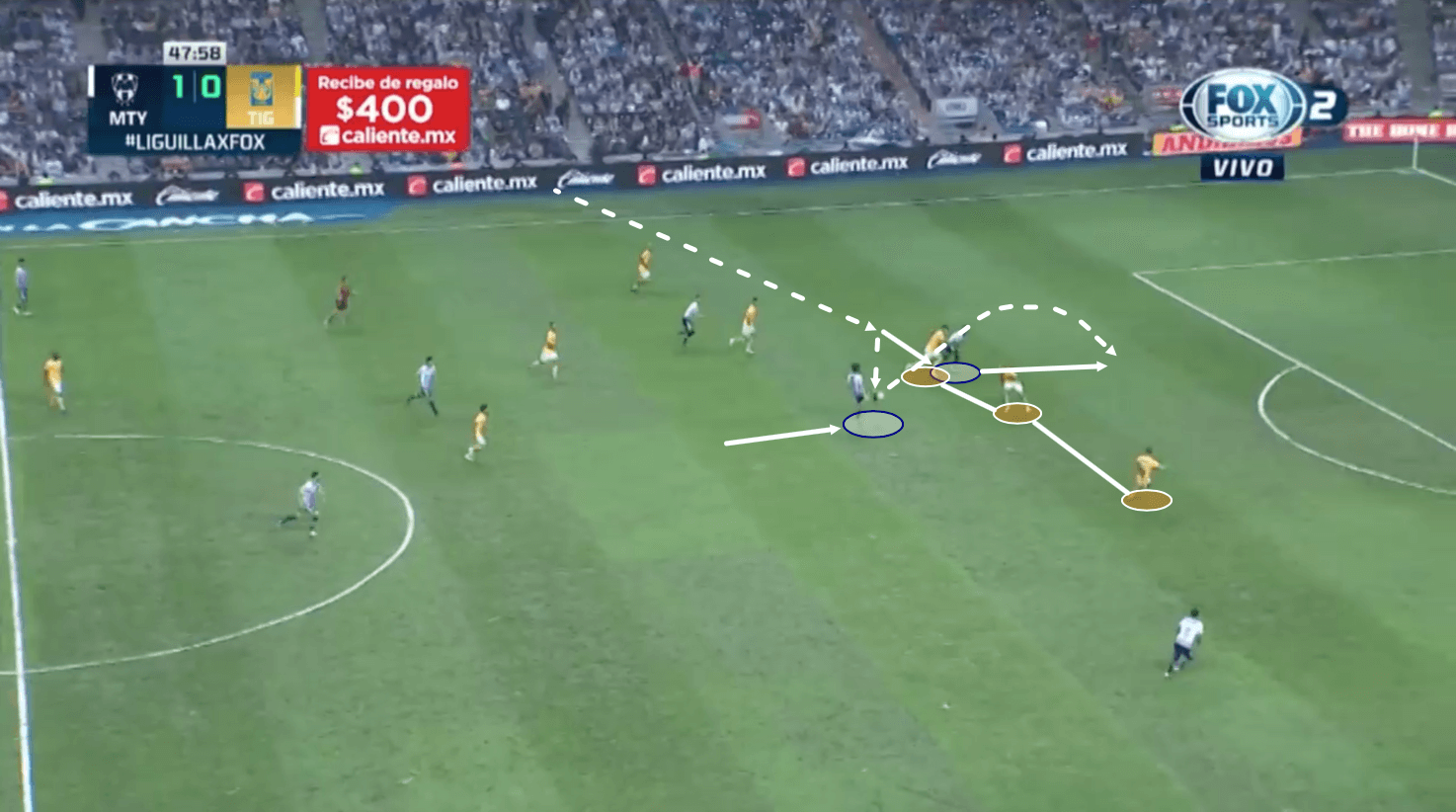 Here is another example of Pizarro on a quick attacking transition. After the striker brings down a long ball, Pizarro receives the short back pass, maintaining space in front of the front line. Using his technique he is then able to complete a lofted pass over the backline to the running striker.

Pizarro is especially skilled at evading pressure and seeing space on the pitch. He often utilises both these traits in his advanced positions to progress the ball. 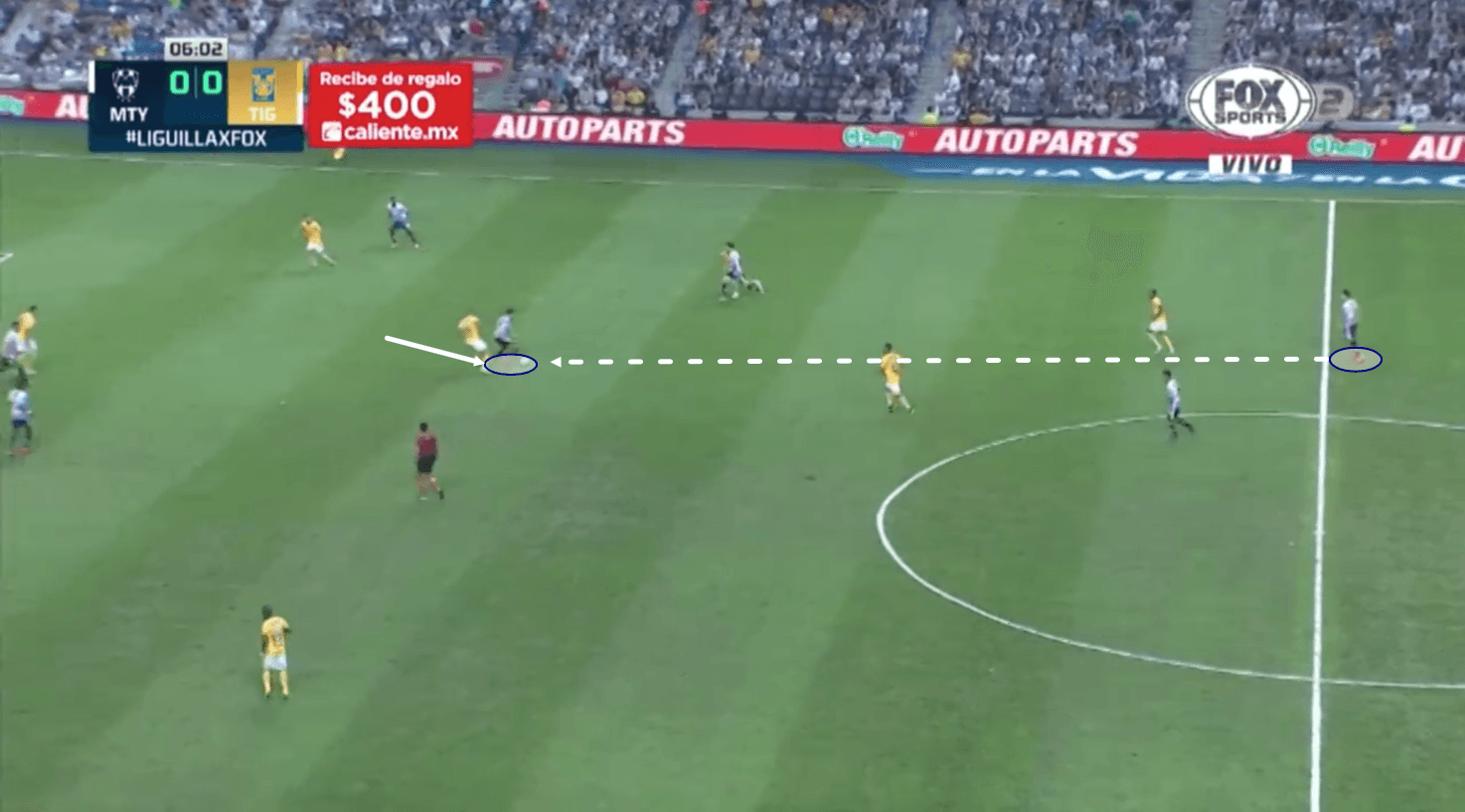 This is an example of Pizarro using his vision. Once again, he receives the ball from the back line under pressure after dropping back in the half-space. 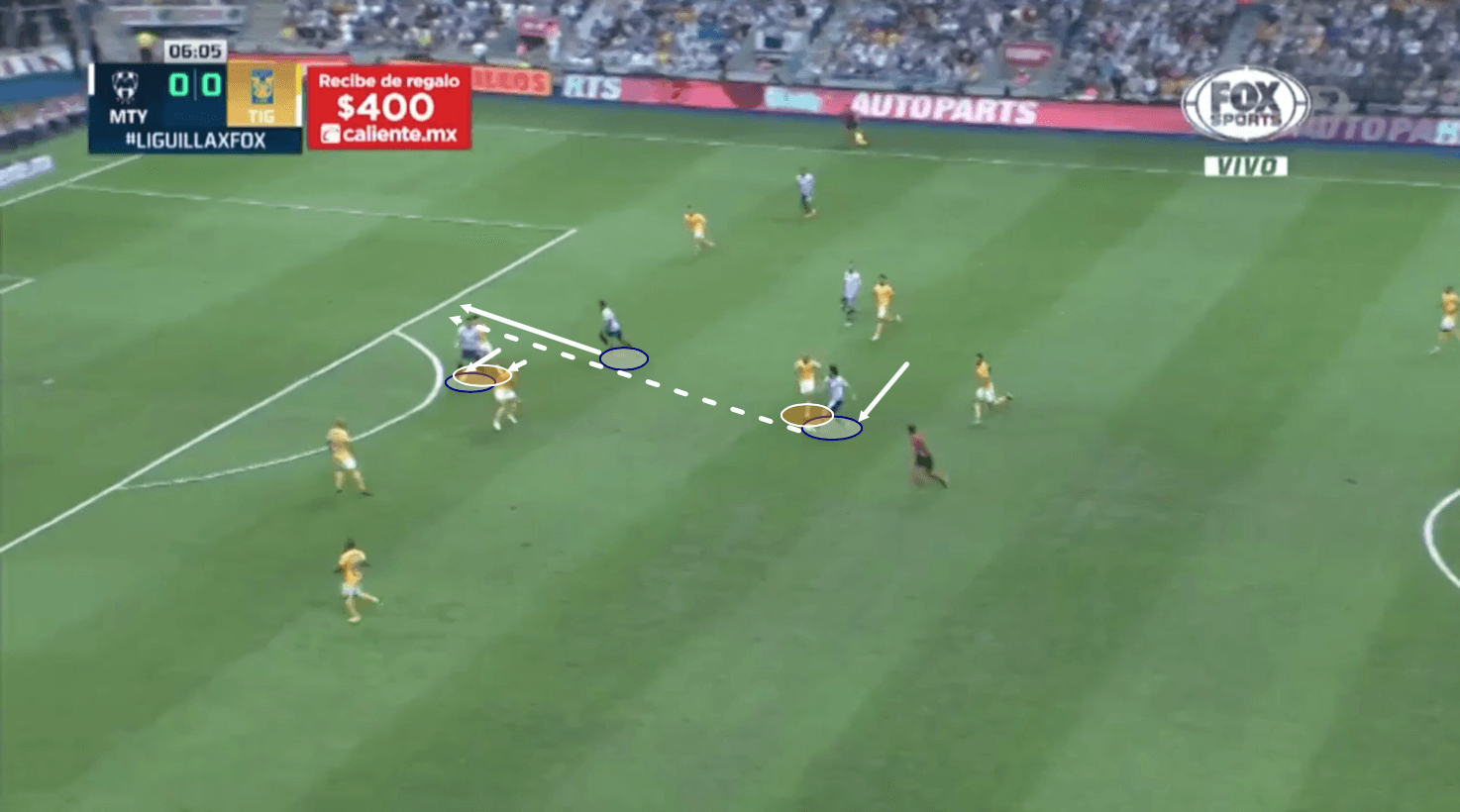 Pizarro is once again able to turn on the ball to create separation. He sees the striker moving inside parallel to his own run, which lures the left-centre-back inside. This opens up a lane for another attacker to run through, and Pizarro sees this, completing the difficult pass. 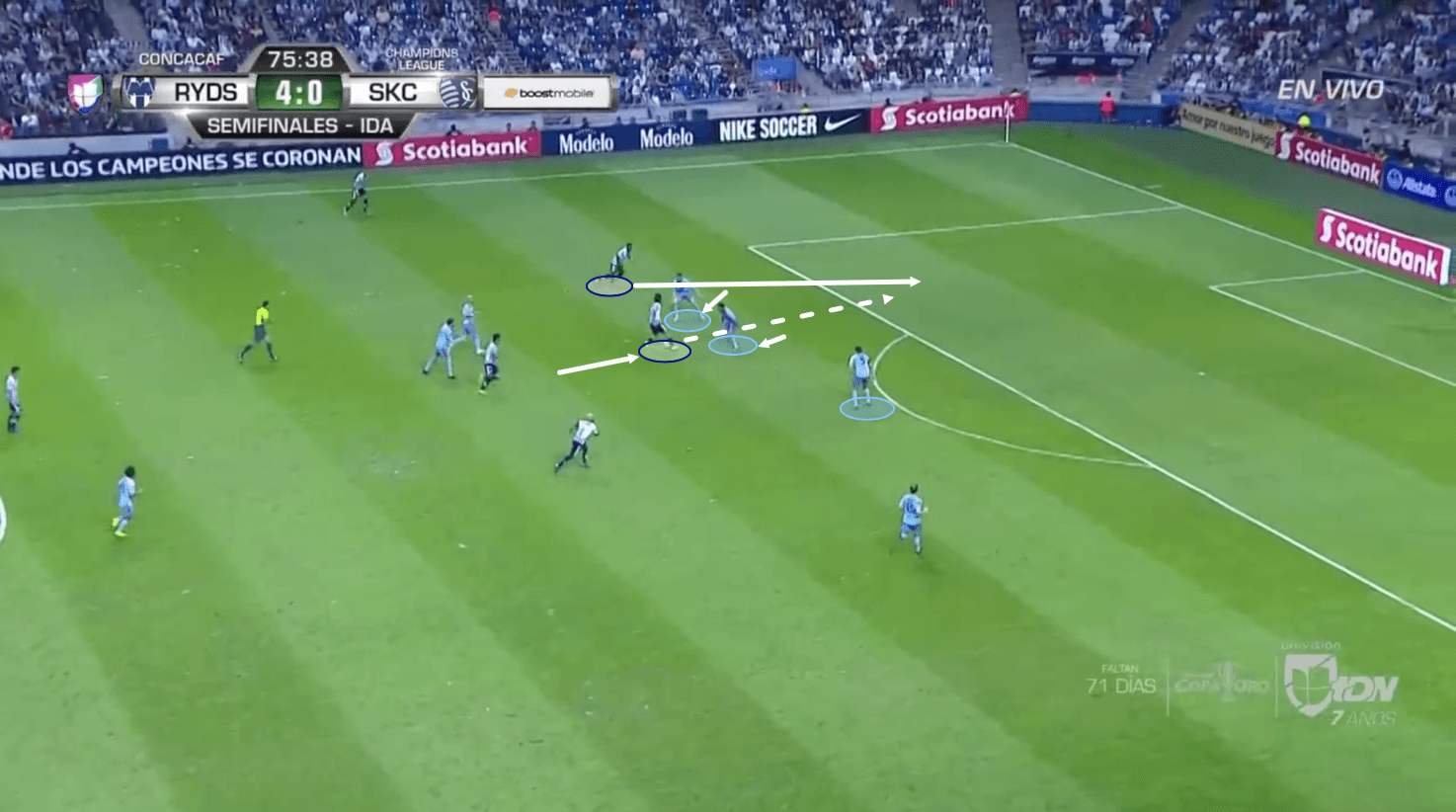 In this scenario, Pizarro carries the ball down the half-space towards the box. The two ball-side defenders on the back line both step forward to press the ball off Pizarro, who uses his ball control to bypass the pressure. He completes the progression on a pass between the two defenders to a teammate making a run into the box. 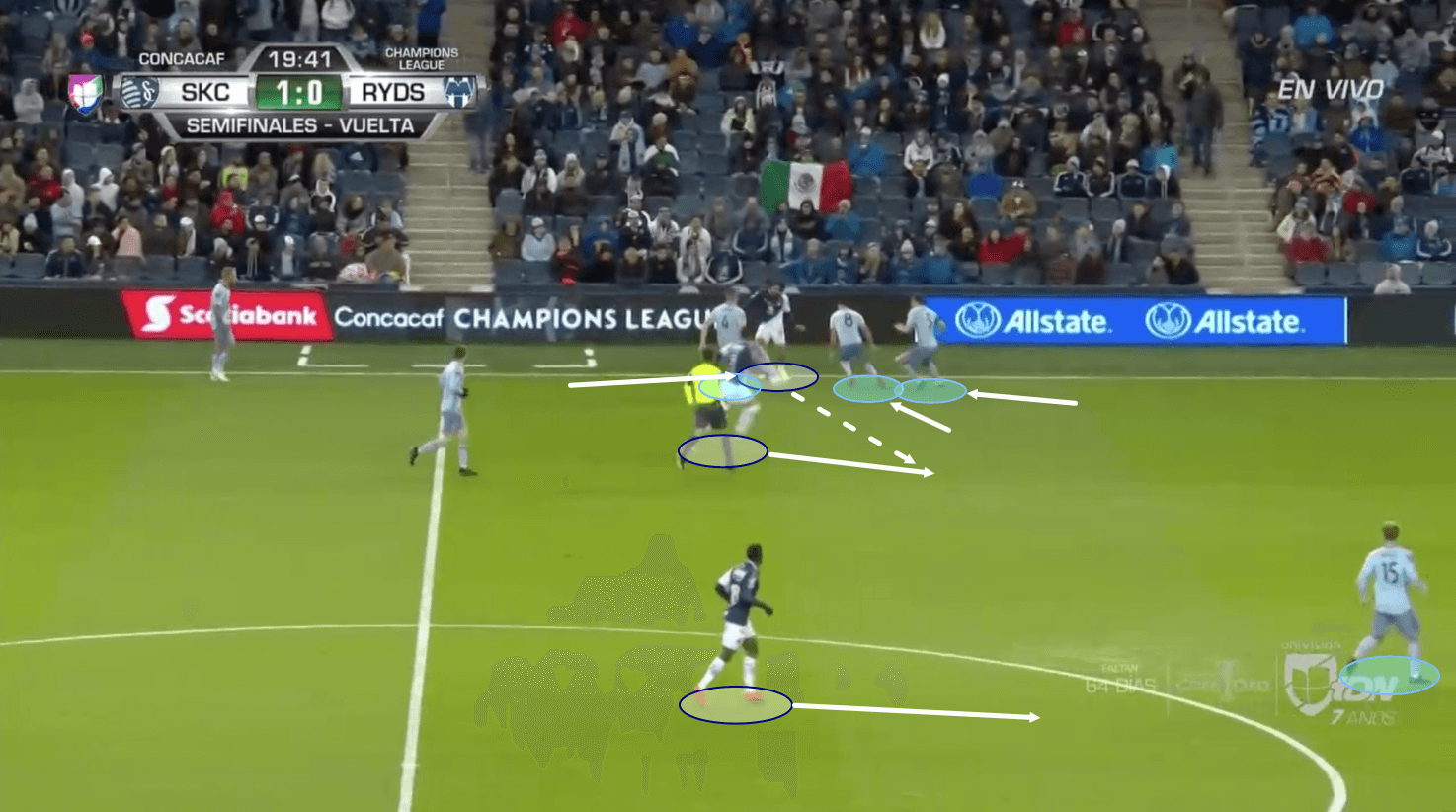 In another instance of Pizarro taking advantage of pressure, he carries the ball forward down the left wide area before being pressured by three defenders. His close-footed ball control again comes into play, as he avoids losing the ball. Finally, he shows his ability to keep his head up on the ball and completes a pass to a teammate making a run down the half-space, relieving the pressure and creating a 2v1 for his fellow attackers.

Pizarro’s ball protection is superb. He is very good at passing out of pressure, and this press-breaking ability can be invaluable to a side in any system. It has yet to be seen exactly what tactical methods will be seen at Inter Miami, as there has been a debate that Alonso may switch to a more possession-based side. Regardless, Pizarro’s ball progression via his ball control under pressure and his vision should prove fruitful in either case.

Pizarro attempts to create opportunities through all areas of the final third. He uses similar tactics and techniques to those in the central and deeper attacking areas of the pitch. 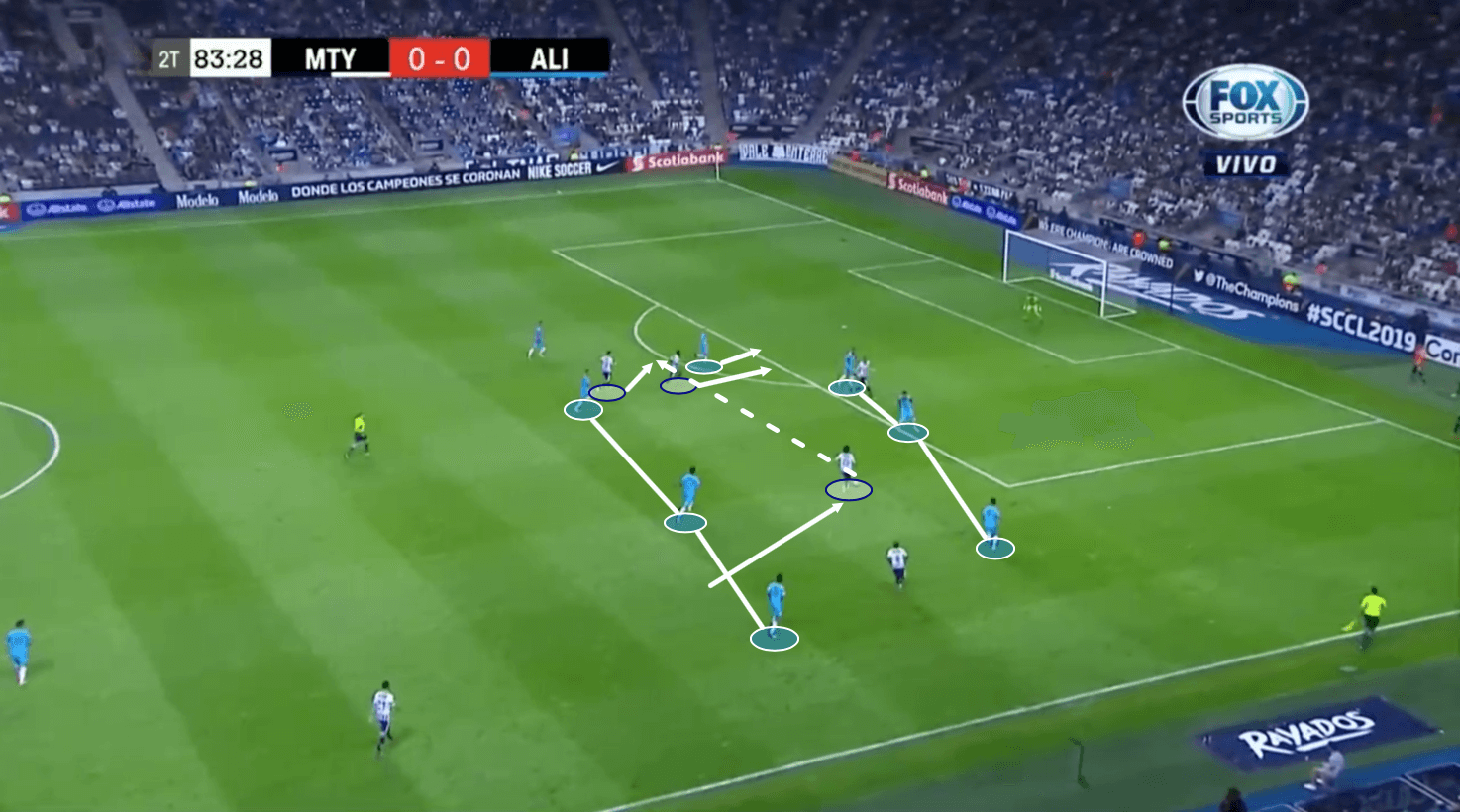 Above we see Pizarro in space between the defensive lines after dribbling down the right half-space. Across the pitch in the central area, Pizarro can see an attacking teammate making a driving run into the box, and another making a run a few yards behind him. Pizarro expertly completes a long horizontal pass into zone 14, where the second runner has open space to control the ball, as the first runner’s movement drew the defender back into the box. 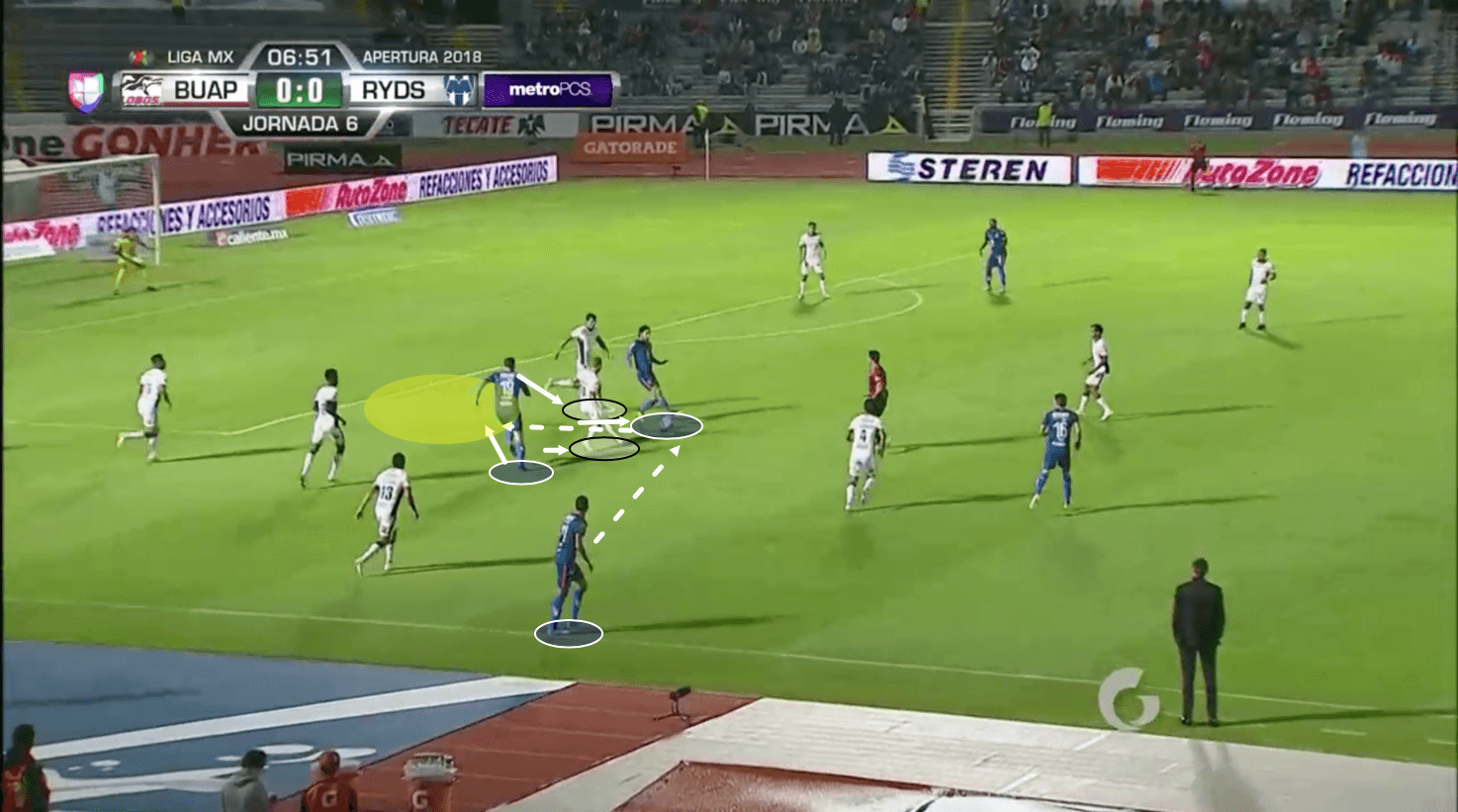 Another method Pizarro uses to aid in creating chances is his ability to handle pressure. On this designed throw-in, Pizarro receives the ball with his back to goal. This movement draws out two defenders, opening up space just outside the box. Pizarro’s awareness and technique allows him to complete a backheel pass into this space to a teammate making a run into said space.

Pizarro’s advanced skillset makes him dangerous in any area of the pitch, be it in the final third or in the central areas of the pitch. 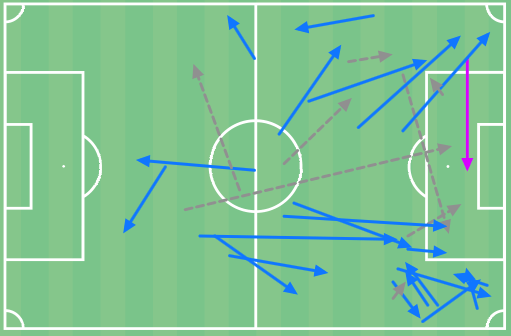 Upon analysis of Pizarro’s passmap in Inter Miami’s first match, we can see his passes often came from deeper positions in the attacking half. Pizarro completed 73% of his passes, while also attempting a team-high four shots. 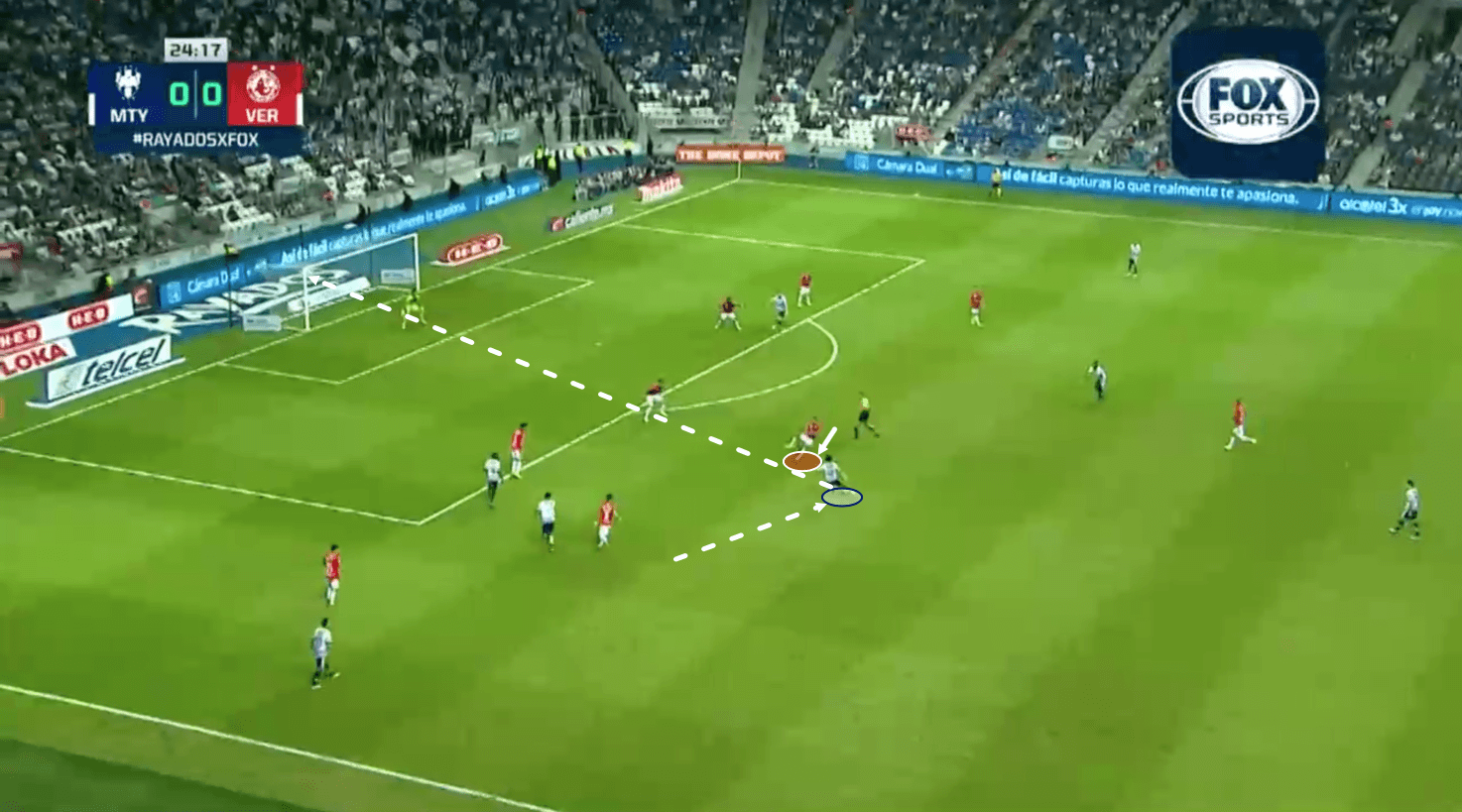 Pizarro also has the ability to execute strong finishes, as seen here on this goal from well outside the box. While his primary thoughts are to progress the ball in quick possession, we could see an increase in shots from him due to his role as the primary attacking cog in Inter Miami’s setup.

Fitting in at Inter Miami

As stated, Alonso’s preferred style of play is pragmatic, counter-attacking football. Yet the Inter Miami roster has a number of players better suited for a possession-based system. It wasn’t likely that the side would out-possess the dominant Los Angeles FC hosts, but there were moments which showed Pizarro’s ability to lead in either system. 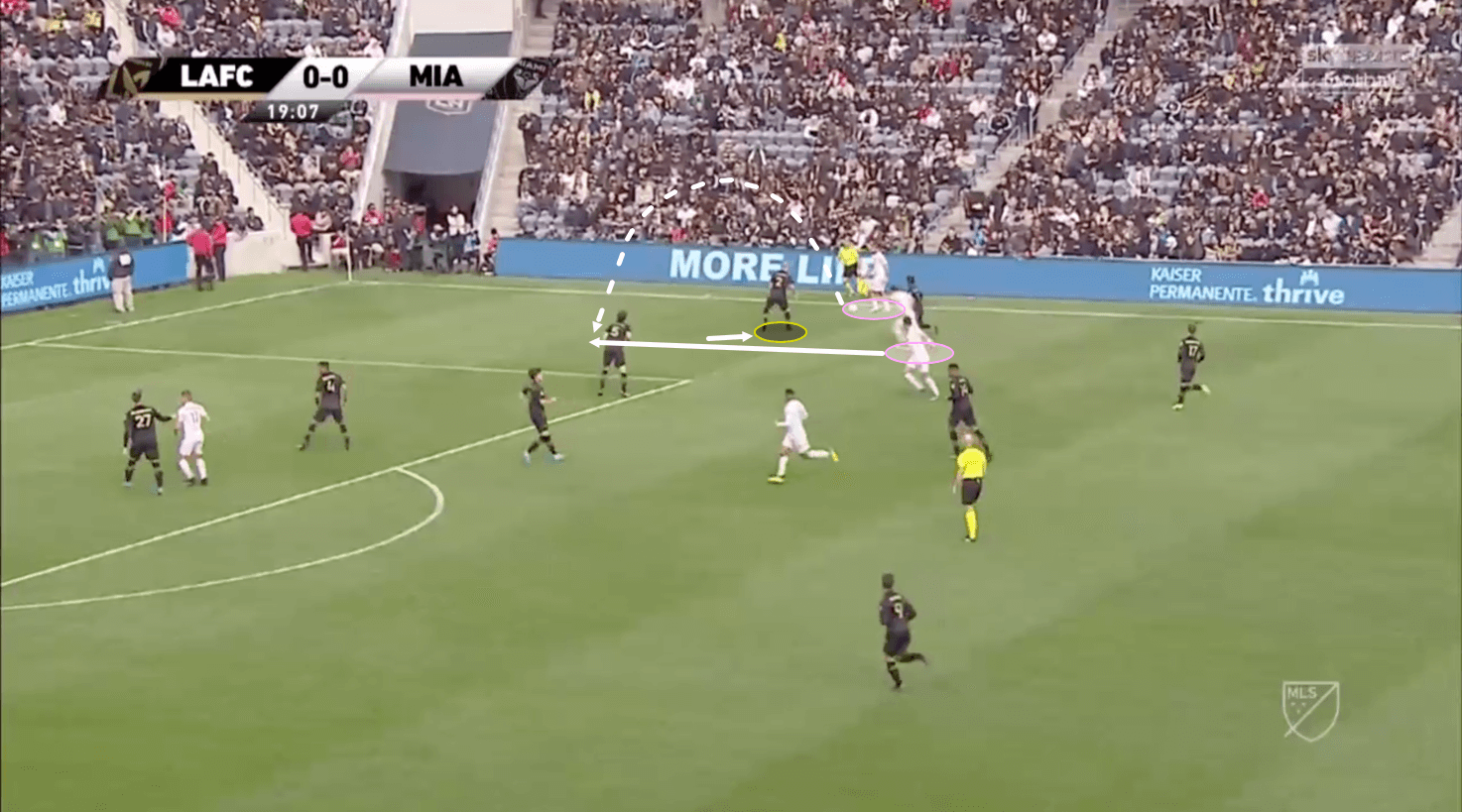 In this example, Pizarro’s wide positioning and ball possession lure the defender towards him, opening up space in the area along the box behind the defender. This is a method Inter Miami could use to get past lower defensive blocks. 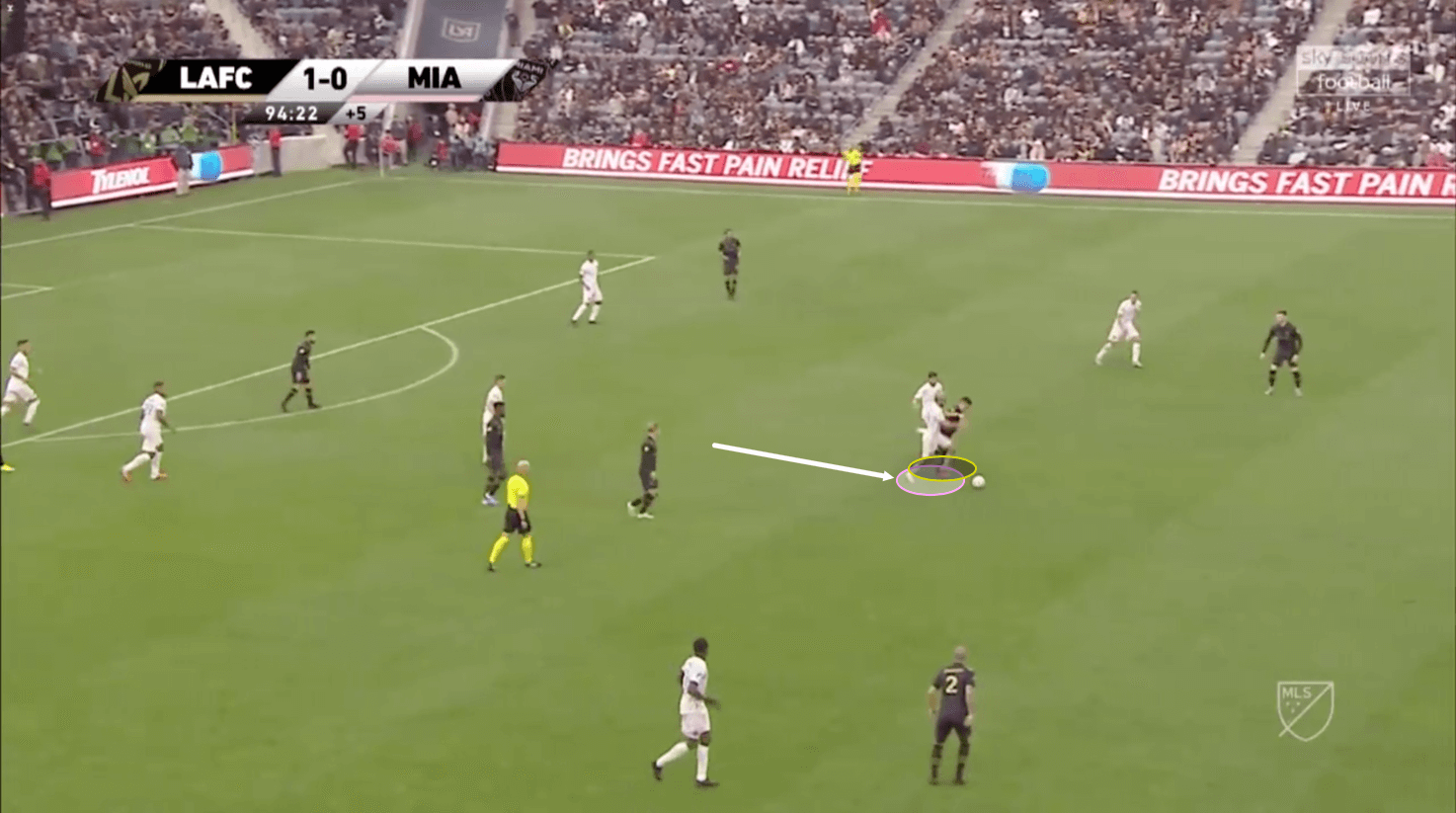 Late in the match, Pizarro showed resilience in the press. Here he presses the ball off the opposing midfielder and quickly launches a long ball in a counter-attacking attempt. 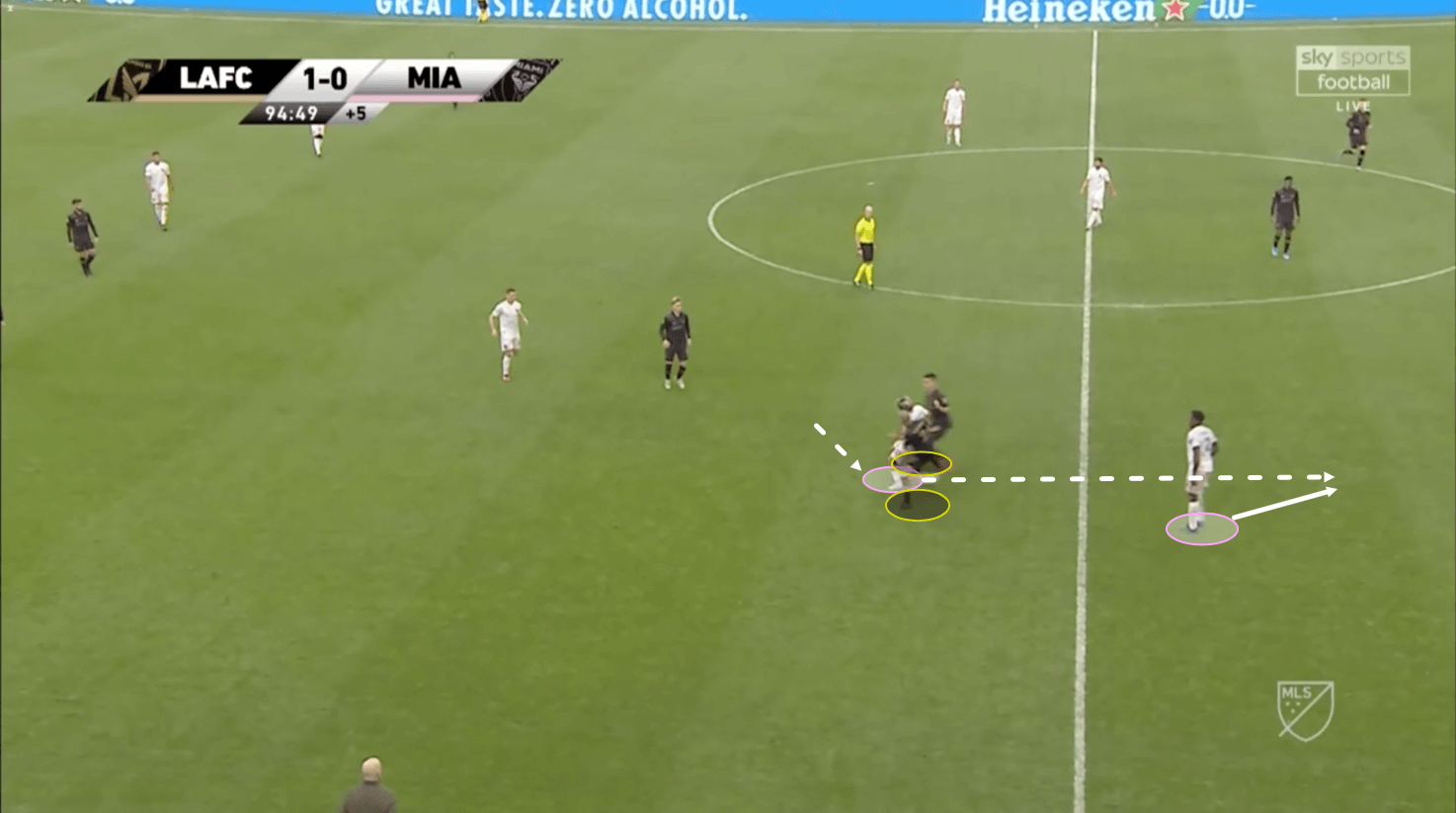 Again in the last waning minutes of the game, Pizarro receives the ball off a long pass. With two defenders pressing him, he completes a backheel pass into the attacking third to a teammate. Unfortunately for Inter Miami, this attack was lost shortly after on a poor pass.

It is clear early on that Inter Miami need a consistent striker, and they have publicly stated they plan on signing a “25-plus” goalscorer in the near future. This could likely indicate a popular name from Europe, such as former Liverpool striker Daniel Sturridge or Colombian forward Radamel Falcao. Someone with an advanced technique and the spatial movement to provide Pizarro with a quality goalscoring outlet would bring a boost to this squad’s attack and allow them to become more dynamic in whichever tactical system Alonso chooses.

Inter Miami lost a hard-fought 1-0 match to 2019 Supporters’ Shield winners Los Angeles FC on matchday one of the MLS season. Nevertheless, the Herons’ season will be watched with much anticipation. Pizarro’s move to MLS was unique; one of the overall best players in Liga MX, not yet at the pinnacle of his career, opting to move north of the border as opposed to across the pond. AS shown in this tactical analysis scout report, he has already shown flashes of his ball control, progression in possession, and sharp attacking vision, all of which will likely improve as he becomes more acclimated to his new team. The playoffs for the moment seem like the primary goal for Inter Miami for now, but that could change with new acquisitions in the near future and the consistent, high-quality style of play from talisman Rodolfo Pizarro.