The Liverpool juggernaut finally claimed the missing piece of their puzzle after laying their hands on the English Premier League trophy at the end of the 2019/20 season. After 30 long years, the Merseyside outfit has established themselves at the top of English football and they did so in some style. Having conquered the world, they set out on a record-breaking season, losing just once and winning the title with seven games to spare.

Jürgen Klopp’s successful team arguably had the most all-rounded squad in the Premier League if not the world, with a solid defence combining with a steady midfield to supply an explosive attack. While the likes of Mohamed Salah and Sadio Mané often made the headlines for their incredible goal-scoring feats, it should be noted that Roberto Firmino was a crucial part of this famed trio.

The Brazilian forward’s incredible work rate in dropping back to help the midfield paved the way for the likes of Salah and Mané to rack up the goals for the side. Hence it is understandable why Firmino would have the least goals scored among the front three. However, could it be that the Brazilian has still underperformed during Liverpool’s title-winning season? The shot map below gives us a better picture. 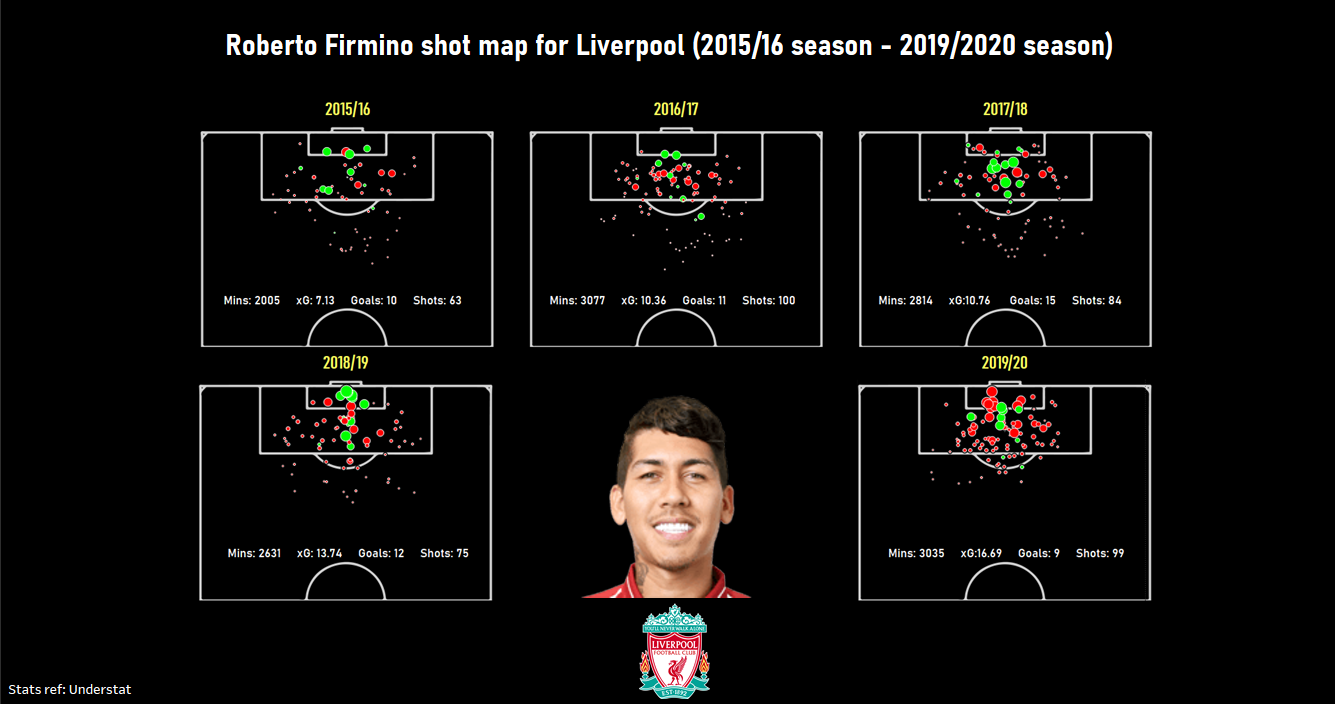 It appears that Klopp had found the perfect strategy to get the best out of Firmino in the 2019/20 season. The number of shots taken from outside the box has largely reduced for the Brazilian and he appears to have taken more shots from better goal-scoring positions. His expected goal metric for 2019/20 is the highest among all the five seasons that he has been at the club but contrastingly, he is on his worst goal-scoring season since joining in 2015. Having taken 99 shots, Firmino has scored only nine goals. His header against Chelsea at Anfield in their last home game was the only goal that he had scored at home all season. While a shot map would not always give the full picture, it is still surprising to see the number of red spots right in front of goal, indicating his misses from those positions. It is certainly rare for a team to exert such dominance over a season with a striker underperforming in such a manner.

While it can be argued that Firmino offers much more than a goal-scoring presence in the squad, it is certainly worrying to see his performance this season. The impressive performances of Salah and Mané have largely covered up the Brazilian’s lack of form but as the main forward, it cannot continue this way. His eight assists this season, third in the squad behind Trent Alexander-Arnold and Andrew Robertson, is perhaps his only saving grace at the end of the season.

His work rate and influence on the pitch cannot be ignored but if Liverpool are to defend their title again next season, Firmino would have to undoubtedly perform better in front of goal.