Manchester United had an explosive start to the 2021/22 season. From announcing the signing of Jadon Sancho one month ago, to unveiling World Cup winner Raphaël Varane in front of a packed Old Trafford stadium minutes before beating rivals Leeds United by four goals on the Premier League opening weekend. Yes, United looked exciting to watch on that evening against Leeds United. This might be the season Manchester United genuinely challenge for the title – a result of their smart, patient and brilliant work for nearly two and half years.

The following visualisation shows Manchester United’s squad depth for the 2021/22 season. Some players who are very likely to leave before the end of the window have not been included. 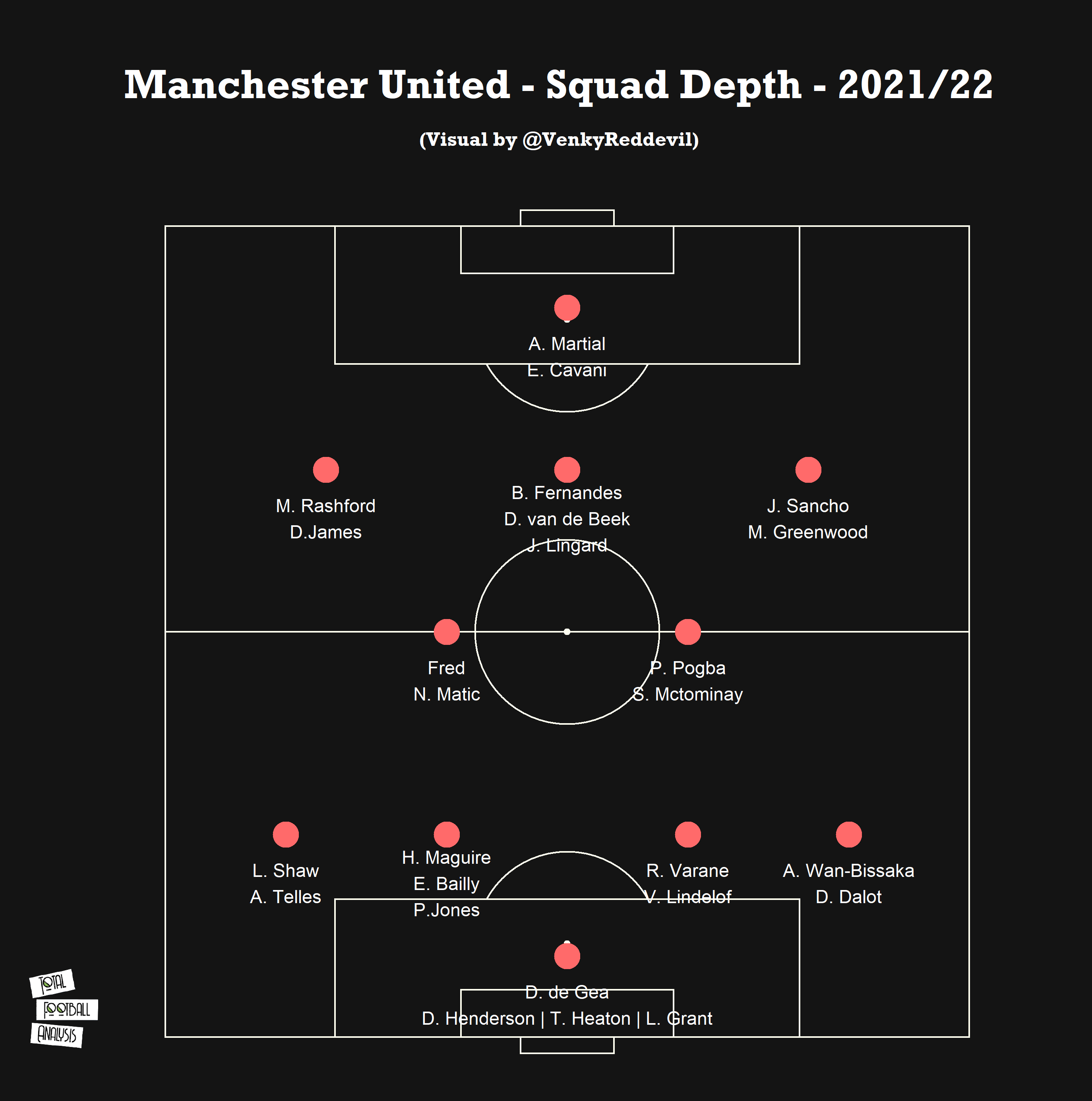 One of the biggest problems for manager Ole Gunnar Solskjaer when he took over the reins at United was that he had a squad of players built by three different managers at his disposal. Some of these players were on big undeserving contracts and some of them were past their prime. Solskjaer set a date to resolve this mess and promised he would, with the support of the board, build a squad to challenge well and truly in the 2021/22 season. It is only fair to say that the manager has lived up to every word of his, proving a lot of his doubters wrong along the way.

United’s squad is one of the youngest not only in the league, but throughout Europe. In his first summer transfer window, Ole decided to address one of the key positions, center-back, signing Harry Maguire from Leicester City for a record fee. Then, he quickly turned his attention to a position United have not addressed for the last decade, right-back, signing Aaron Wan-Bissaka from Crystal Palace. United also managed to sign Daniel James from Swansea to temporarily solve the right-winger problem. The problem after this window was that United looked better in defense but had problems attack-wise and looked very thin at the start of the 2019/20 season.

In the following January window, United announced the arrival of Bruno Fernandes, but still there were problems in the squad and there was a clear difference in quality between the starting eleven and the bench. In the 2020/21 summer transfer window, United signed Donny van de Beek, Alex Telles and free agent Edinson Cavani to add much needed depth to their squad. Manchester United finished the 2020/21 season in second place. In the recent summer window, United signed Jadon Sancho and Raphaël Varane, two players who will improve the quality of the starting lineup significantly. While doing all of this, United also managed to quickly offload players like Alexis Sanchez, Chris Smalling, Ashley Young etc. who were not part of the manager’s plans.

Manchester United, like mentioned earlier, look serious this year. Having fixed a lot of problems in the squad and adding much needed depth in a number of key positions, there is every reason to believe Manchester United can challenge for the 2021/22 title.