Manchester United have once again started the season very poorly under Ole Gunnar Solskjaer. The Red Devils are nine points behind leaders Chelsea. Solskjaer has come under a lot of scrutiny for the brand of football that his team are currently playing in spite of having one of the best squads in the league. Not only that, the manager has also been criticised heavily for under utilising his squad.

The following visualisation shows the percentage of overall minutes that his players have played in the Premier League this season. 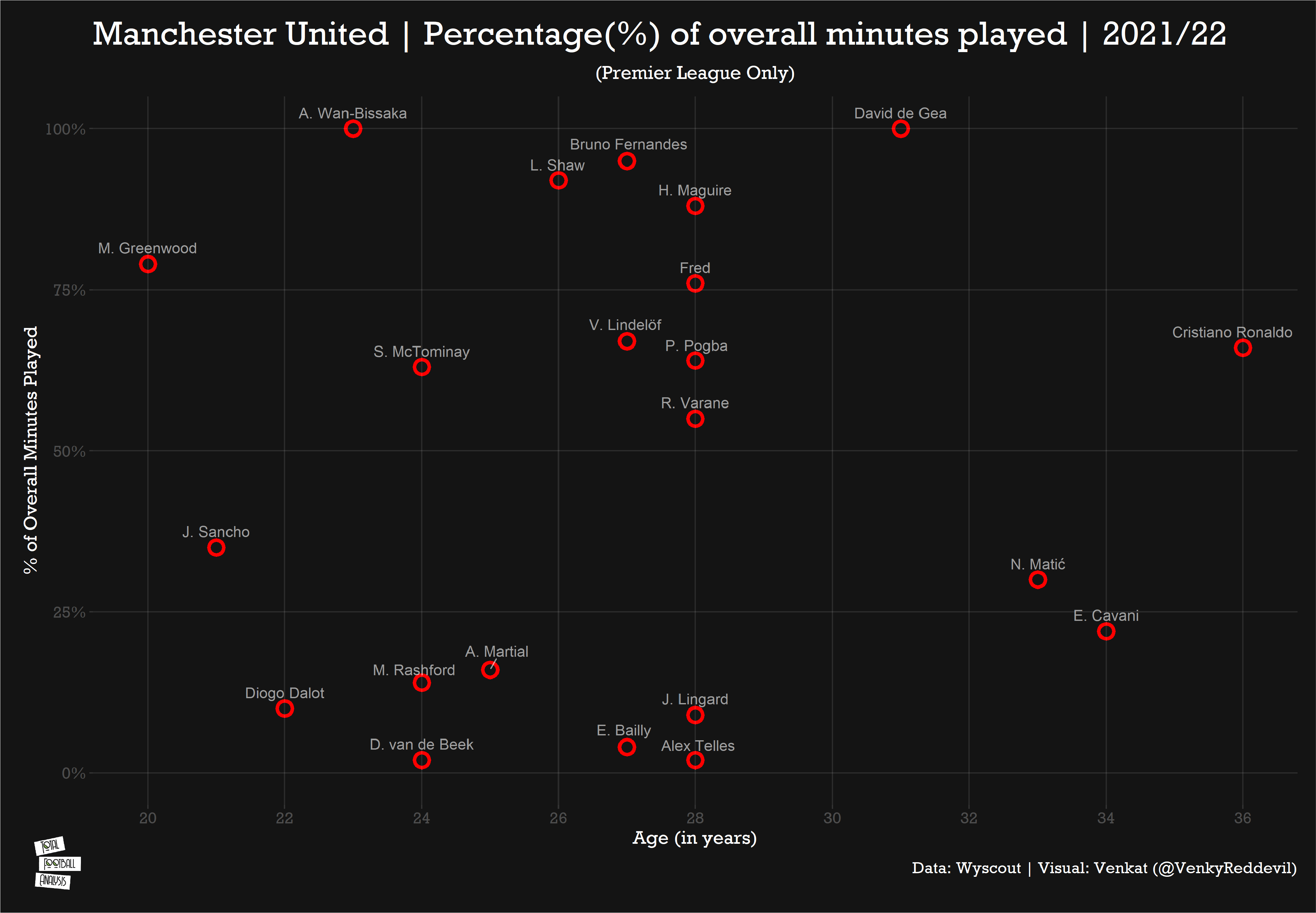 It is no surprise to see that Cristiano Ronaldo has played close to 70% of the overall league minutes since re-signing for United. Aaron Wan-Bissaka is the only outfield player to have played every minute of the league season so far. Bruno Fernandes, whom the manager is not willing to rest at all, has played 95% of the overall league minutes. Mason Greenwood, to most people’s surprise, has played 79% of the minutes. New signing Raphael Varane’s frequent injuries has proven beneficial for Victor Lindelof, who has played 67% of the minutes. However, the Swedish national team captain will eventually become second choice if Varane returns to full fitness and the manager decides to go back to his preferred 4-2-3-1 formation. Paul Pogba, who could be playing his last season at Old Trafford, has featured in 64% of the overall minutes.

The biggest surprise is slightly lower down in the above visual. After chasing Jadon Sancho for almost two and half years, the manager still does not know how to utilise him with Sancho playing only 35% of the overall league minutes. Nothing has changed for Donny van de Beek with the Dutchman having been promised game time this season but having only played 2% of the overall minutes. The same could be said for Eric Bailly and Jesse Lingard who have played only 4% and 9% of the overall league minutes respectively. Injuries have restricted Anthony Martial and Marcus Rashford to be featured in less than 20% of the overall minutes. Alex Telles and Nemanja Matic have also struggled for regular gametime.

Looking at the visual above, the criticism on Solskjaer about not utilising his squad to its full extent seems accurate.